To begin at the beginning

Edinburgh: capital city, cultural hub, home to half a million people... how does one begin a blog which takes Edinburgh as its starting point yet may wander who knows where?

With what you can see, of course. And what I can see, from where I sit, tapping away at the computer, is where it all began, 'all' meaning, of course, the city and its people.

Looking  through the sitting room window, my gaze falls directly onto Arthur's Seat. 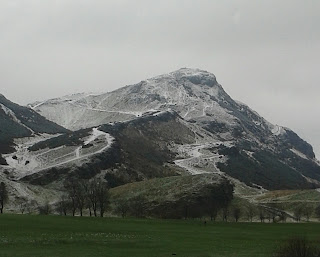 There it is, looming over the modest tenements, modern flats and grand royal palace. Where else in the world would you find a craggy pile like this right in the centre of a capital city?

This view of Arthur's Seat, which never fails to lift my spirits whatever the time of day, season of year or current psychological state, is why I live here. In bright weather the sunshine falls across the slopes, streaking light across the dark. Nevertheless, it is not an 'easy' view.  On overcast days, it broods. Whatever the weather, no soft rounded hillsides woo the senses. Arthur's Seat thrusts through the smooth grassy fields of the royal park of Holyrood, one of various volcanic cores which stamp the character of the city and burst through  the surrounding land, and even the sea, of East Lothian. In fact, on Arthur's Seat there are two plugs, both of which became the sites of hill forts millions of years after the last magma trickled down the slopes. 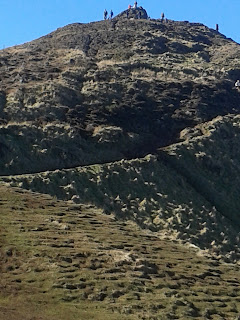 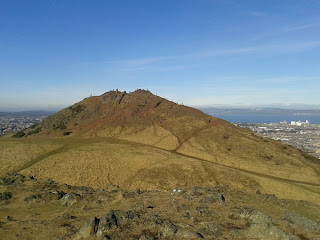 From these Iron Age forts the sixth century Votadini, a Celtic tribe, scanned the Firth of Forth, looking north towards the hills of Fife. 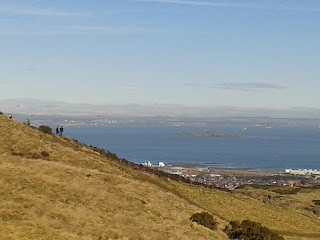 To the east across the bay they could see another plug, Berwick Law, just discernible as you can see below on the misty horizon of a gloriously sunny New Year's Day. 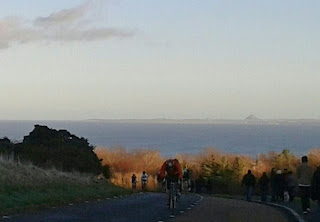 On clear days, their gaze may even have reached as far as the Bass Rock out in the Firth, but I am not certain enough to vouch for that. 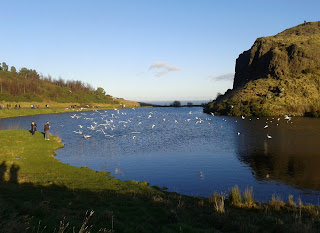 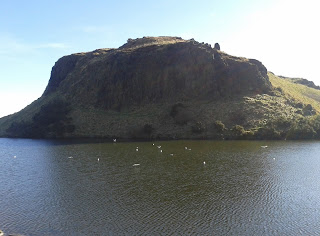 At Dunsapie you will see a breeding pair of swans and their family (if you are there at the right time of year). Flurries of herring gulls swirl across the water. 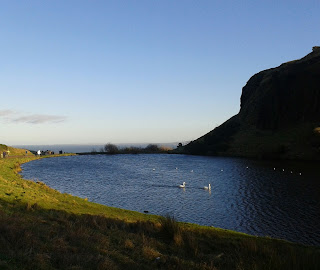 If you climb higher up the slopes of Arthur's Seat, you will see Dunsapie Loch again, but this time with modern Craigmillar beyond. Follow the coast to the east and you will soon be in Portobello and Joppa , once seaside towns in their own right, but now to all intents and purposes, suburbs of Edinburgh. Follow it to the west, and you come to the Port of Leith, also once a separate township. 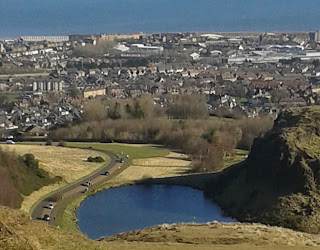 However, we are staying put in Holyrood Park. Nowadays, Arthur's Seat is a popular spot for dog-walking and, particularly at the weekends, for family expeditions. Panting runners pound up the metalled access road to Dunsapie and breathless cyclists glory in the descent past Duddingston Loch (below), then, to the west, past Priestfield House and Prestonfield Golf Course. 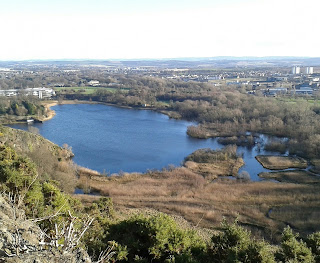 And just in case you think we're one loch short, here's the other stretch of water within the park boundaries. St Margaret's, crowded with swans, geese and ducks is a favourite with children who, fearing nothing, feed the 'ducks' with an innocent lack of discrimination while their protective parents prepare to leap to rescue them from marauding swans. I must admit, though, that I have never yet seen a determined Edinburgh toddler battered to death by an exasperated swan. Why bite the hand that feeds you, after all? But St Margaret's isn't a 'proper' loch. It was constructed by Prince Albert in 1857 as part of his park 'improvements'. 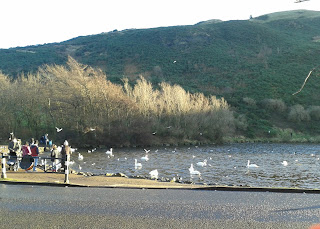 Above St Margaret's Loch sit the ruins of St Anthony's chapel, early fourteenth century. Not much is left apart from ruined walls and a couple of windows. 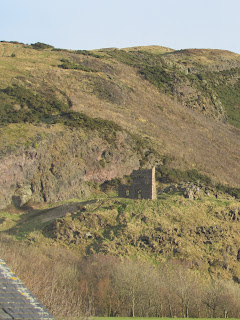 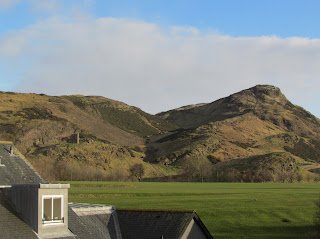 Arthur's Seat, a handful of lochs - what else can one see when walking along the many trails in this magnificent royal park? Salisbury Crags, of course! 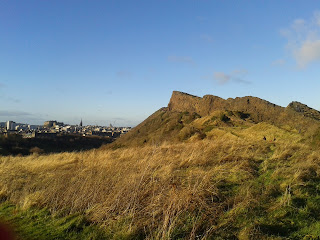 These cliffs are favourite spots for rock climbing, though these days you have to get a (free) permit from the ranger post. Just where the cliffs themselves join the green slopes of the hillside runs the Radical Road, a rough footpath built by unemployed weavers from western Scotland, at the suggestion of Walter Scott, the nineteenth century novelist. During the 'Radical War' of 1820, otherwise known as the Scottish Insurrection, unemployed artisans came out on strike against the British government. More literate than their English counterparts, thanks to the Presbyterian Church of Scotland and its support for education, they demanded reform and the restoration of the Scottish Parliament. The rebellion was ruthlessly suppressed.

Compare the sun-filled photograph above with another from a different angle which I took a couple of days later from Regent's Road, which leads from the Abbeyhill area to Princes Street and the junction with Leith Street. In the forefront of the picture is the churchyard of Canongate Kirk, which the Queen attends when she is staying at Holyrood Palace and where Zara Phillips, her granddaughter, and Mike Tindall got married a couple of years ago. However, we will leave Canongate for another post. It is Arthur's Seat in all its variability which interests me just now. 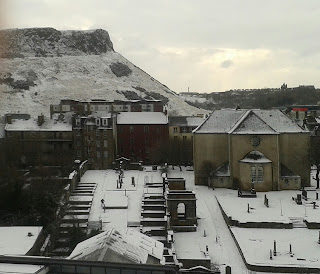 And that is what is so fascinating about Arthur's Seat, how its mood changes depending on the angle of the sun, the cloud cover and the season. These snowy photos, snapped on a grey winter's morning, look as if they've been taken in black and white - or fifty shades of grey! 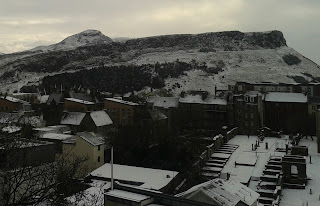 In such weather the ice-covered hills are no longer the playground for well-brought-up Edinburgh children. Indeed, they are too often the setting for dramatic helicopter rescues as over-ambitious tourists with inappropriate footwear attempt to clamber up almost perpendicular cliffs. In poor light, their menacing outcrops of rocks bring to mind the evil presence haunting a pivotal chapter, set on Arthur's Seat, of James Hogg's 1824 masterpiece The Private Memoirs and Confessions of a Justified Sinner. Hogg, the self-taught Ettrick Shepherd, once worked for Walter Scott, collecting traditional ballads. Scott himself mentions some of the landmarks of Holyrood Park in his historical novel The Heart of Midlothian. Scotland is a small country, and people and places are often connected.

So we end, as we began, with a wintry Arthur's Seat. In other posts we will explore some of the lesser known corners of Edinburgh: no shortbread and tartan for us. In the meantime, however, we are off to Hungary. See you in Budapest in a few days' time!


Postscript
Salisbury Crags quite often features in thrillers and fictional murder stories, for example by Ian Rankin. However, it has also been the setting for real-life crimes of various kinds as in this account of 'the infamous Salisbury Crags murder' of 1972.

Posted by Elisabeth Ritchie at 21:16