Light and shadows in Budapest

It is not often that Hungary hits the British news. It was quite by chance that the day before we flew to Budapest, an article appeared in various papers about the winner of Hungary's top state journalism prize, Viktor Orban. The UK's Independent used the headline: Government picks famed anti-Semite as Hungary's top journalist.

The article, by Tony Paterson, noted that the prize had been given to a man who subscribes to Jewish conspiracy theories and has described the Roma as 'human monkeys'. This statement resulted in the Hungarian media watchdog fining pro-government Echo TV, which broadcast the remarks. In response to Orban's award, ten former Tancsics prize winners said they were returning their own awards in protest. However, Orban was not alone in being rewarded for his fascist beliefs. Other recipients of the award included the lead singer of the group Karpatia, Jano Petras, (described by The Independent as 'extreme right-wing and virulently anti-Semitic') and the archaeologist Kornel Bakay. The latter apparently claims that Jesus Christ was Hungarian and that mediaeval Jews were slave traders.

Hungary is not the only European country which has been accused of tolerating - and even nurturing - right-wing racist behaviour, both political and social. Poland's football supporters are a case in point. Pogroms and ghettos have been part of the East European way of life for centuries. And, of course, it is not just East Europe. Greece has its Golden Dawn Movement and we have the British National Party and the superficially more respectable UKIP.

Where do fanatical ideas such as Orban's come from, let alone the anti-intellectual myths on which they draw?

We had a lot to think about when we boarded the plane to Budapest.

The Hungarian capital overwhelms the visitor with its imperial grandeur and bewitches with its beauty. With every passing cloud, light and shadows play across roofs and highlight individual streets and buildings.

In Pest, the gleaming nineteenth century Parliament, reminiscent of Westminster, dominates the banks of the Danube. 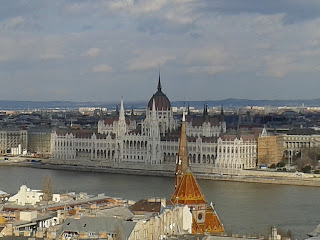 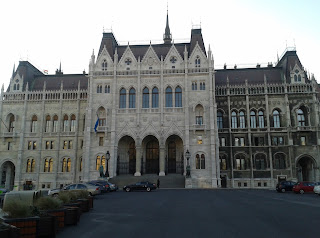 Around the Parliament, stand the grand public buildings of the Austro-Hungarian empire. Below, light picks out the facade of the Ethnographical Museum. 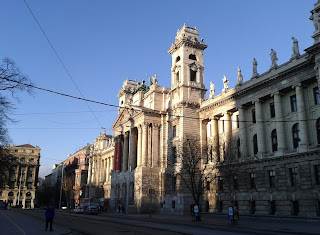 In sunshine, the white stone of Buda dazzles. Fairy tale vistas tell of a Neverland of Hungarian nationalism. 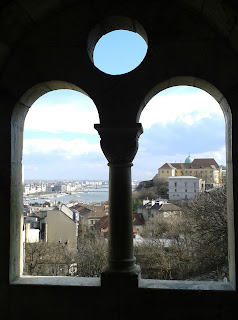 It is said that the nineteenth century Fishermen's Bastion harks back nostalgically to the nomadic tents of the original Magyar inhabitants. 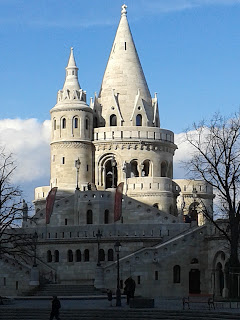 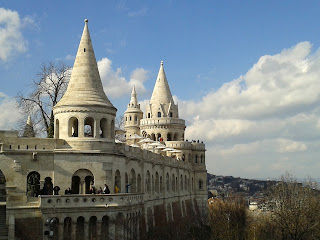 Overcast skies, however, deepen the shadows and tell a darker story, a story of a country repeatedly invaded and constantly reasserting its national identity. The Royal Palace, now the Hungarian National Gallery, dominates the riverside of Buda. Destroyed by Christian soldiers during the Turkish occupation, by Hungarian insurgents in 1849 and by Allied forces during the Second World War, it has been rebuilt again and again. 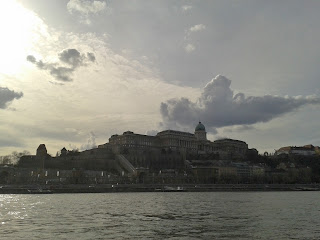 Hungary has had its share of national heroes, struggling to define and assert a Magyar identity against the imperial ambitions of its neighbours and occupiers, whether Mongolian, Turkish, Austrian or Soviet. Lajos Kossuth led the 1848 uprising against Austrian rule, quashed in 1849. 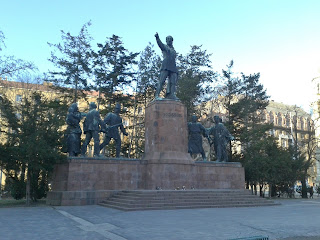 In front of the Parliament in Kossuth Square stands the memorial to the 1956 uprising.Dark and light play across its surface and reflect the buildings opposite. 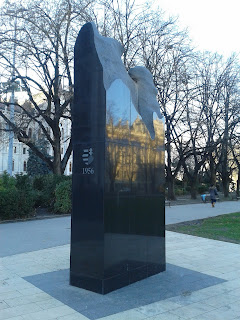 Other monuments tell a more complex story. The Liberation Monument on Gellert Hill, overlooking the Danube, was originally carved as a memorial to the son of the Hungarian fascist regent Miklos Horthy, who disappeared in 1943 fighting with the Germans on the eastern front. When times changed, it was recycled to commemorate Budapest's liberation by the Russians. 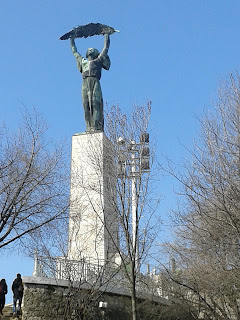 The triumphal  Liberation statue stretching towards the sun overshadows the figure of St Gellert lower down the hill. The patron saint of Budapest, martyred by 'pagans', stretches out to protect and bless the city, a role he has fulfilled since the 11th century, sadly with only mixed success. 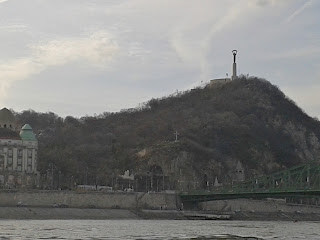 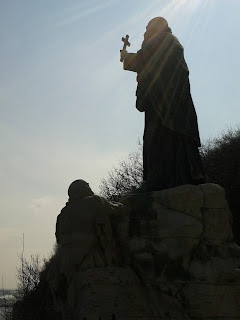 The prosaically named Inner City Parish Church, the oldest church in Pest, was built on the saint's burial site by St Istvan, the first king of Hungary, who accepted Christianity for his people. 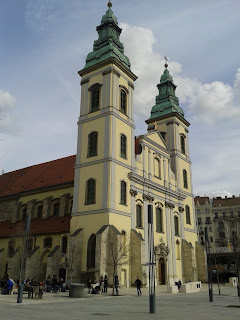 Its solid straight lines contrast with the sparkling spires and intricate fretwork of the Matyas Church in Buda, where the kings were traditionally crowned. 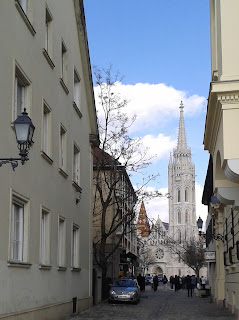 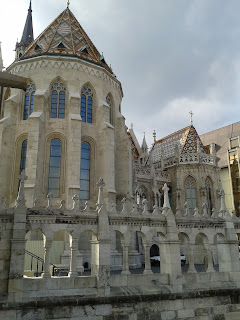 This great city of contrasts and conflicts displays justifiable pride in the shining splendour of its architecture. The winding Danube threads its slow way between romantic Buda and pragmatic Pest, dark against the white. 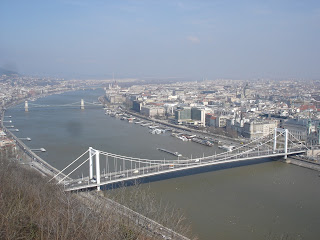 The best way to learn about the factors influencing the Hungary we know today is to visit the Hungarian National Museum. Here each gallery recounts a different stage in the national story. 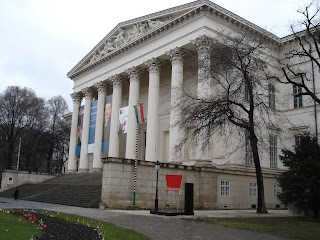 The museum's exhibitions and narratives chart the country's attempts over the last millennium to achieve a separate Hungarian identity. They also recount its more recent and worrying efforts to regain what it has regarded as its rightful borders and the land and populations lost to it at the end of the First World War. Hungary's empire used to occupy an area three times the size of its current territory. In the middle years of the twentieth century the national obsession with territory ended in tragedy. Aligning itself with the Axis powers in the hope that after a German victory it would be rewarded with its lost birthright, Hungary ended up selling its soul. The museum explains the reasons, or 'excuses', if you regard the account as self-justification rather than honest analysis. Go to the museum yourselves and make up your own minds.

The museum explains clearly what it regards as the events which contributed to Hungary taking the 'wrong' side during World War II. What it doesn't make clear, however - indeed, glosses over almost entirely - is Hungary's betrayal of its long-established Jewish population. All there is in the national museum, is one cabinet with inadequate labeling,  its main exhibit a pair of striped pyjamas. Whereas its presentation of the events and circumstances of the Soviet era is supported by detailed statistical evidence of those interrogated, imprisoned and killed, there is a singular lack of hard data about the events and impact of the Holocaust and the role played by Hungary. Perhaps the Hungarian captions said more than the English text and we missed important information. However, if we had not visited the Great Synagogue the day before, we would not have known that Hungary introduced anti-Semitic laws in 1941. Nor would we have known that 600,000 Jews perished in the final year of the war, confined to, and starved in, ghettos before being shipped east to the death camps in 1944. 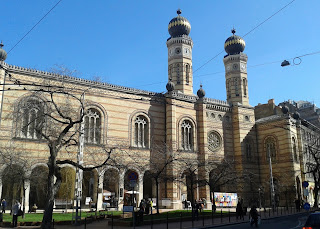 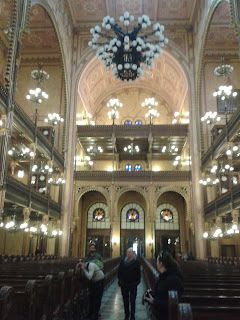 The last Jews to die were shot after liberation - by Hungarian nationalists.  Their corpses were piled up in the courtyard of the Great Synagogue.You can see some of the plaques dedicated to individuals and families in the garden planted since then. 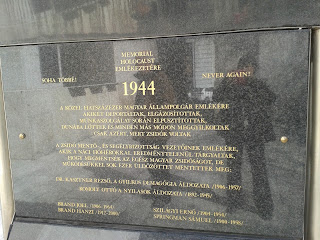 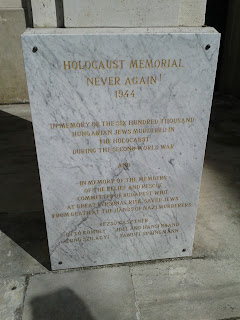 In all this darkness, one of the few gleams of light was the work of Raoul Wallenberg, the Swedish diplomat, who saved the lives of 20,000 Hungarian Jews by setting up safe houses and finding fake Swedish documentation for them. The garden behind the synagogue pays tribute to the work of Wallenberg and others, and provides a place where visitors can commemorate the dead by placing a pebble by individual names. 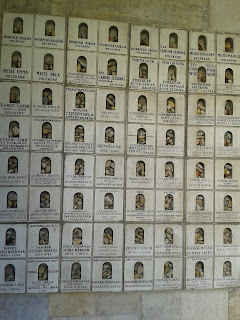 The light streams through the stained glass memorial. 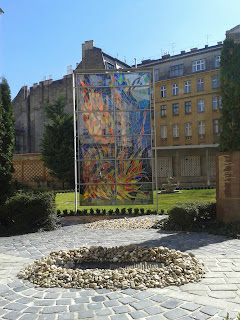 Beyond stands a silver tree, half in shadow, each shining leaf representing a person or family destroyed during the period 1944-45, the reflected light brilliant against the dark.

Posted by Elisabeth Ritchie at 19:57