Don't take these things for granted, for dearly were they bought
Remember Thomas Muir of Huntershill

In Britain we have now become so blasé about elections that many people don't even bother to vote in them. Next week are the local government elections in England and Wales. Next year people living in Scotland will vote for or against independence. Perhaps, given the all-consuming coverage of the Scottish referendum, more electors will stir themselves to cast their vote. I don't know, but I hope so.

I must admit to having been, until quite recently, almost entirely ignorant of the role of Thomas Muir and the Scottish Political Martyrs of the late 18th century in achieving democratic government, not just in Scotland but across the United Kingdom.  That ignorance remained until I first visited Nunhead Cemetery in South London three or four years ago.  Ironic that it takes a visit to England to learn about such a significant figure in Scottish history. 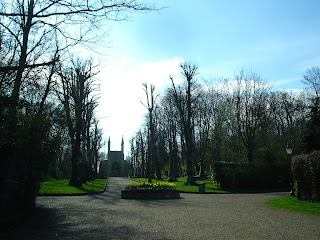 Nunhead Cemetery was established in 1840 as one of the Magnificent Seven Victorian cemeteries set up in a ring around London. Graveyards in the capital were full so new land was taken over on what were then the outskirts of the city. The date of Nunhead's foundation is just over fifty years after Thomas Muir died. 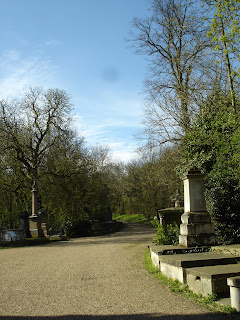 Nunhead has some very interesting gravestones and monuments, not the subject of this post so no photos, I'm afraid. The one I am interested in is the impressive memorial to the Scottish Political Martyrs on the right just after you enter the North Gate and down a path appropriately named Dissenters' Road. 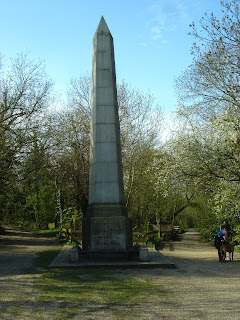 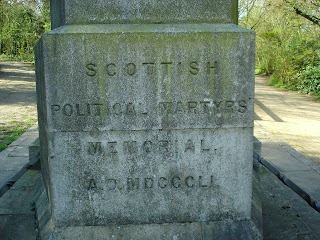 The monument was erected by the Radical MP Joseph Hume, using money collected at a public meeting in London in 1837. The purpose of the fund was to build two memorials to the Martyrs, one in London and one in Edinburgh. I am very familiar with the London monument as it forms part of a pleasant walk which I often take when down in the capital. It has taken me until this month, however, to track down its Edinburgh cousin, of which more later in this post. 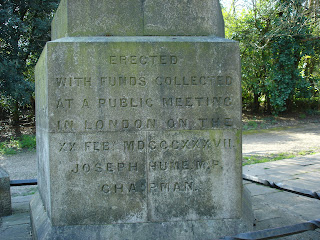 On the base of the Nunhead Memorial is the following inscription. 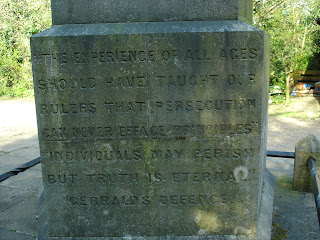 The experience of all ages should have taught our rulers that persecution can never efface principles. Individuals may perish but truth is eternal.

These resounding sentiments come from the speech which one of the martyrs, Joseph Gerrald, made in his defence. One of the other faces of the base lists the names of the five martyrs: Thomas Muir, Thomas Fyshe Palmer, William Skirving, Maurice Margarot and Joseph Gerrald. 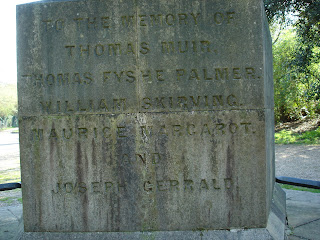 The final face records their crime and punishment. 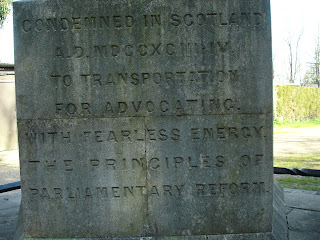 Condemned in Scotland AD 1793 to transportation for advocating with fearless energy the principles of Parliamentary reform.

A useful information board fills in the historical details for those, like me, who have only the sketchiest idea of what was going on in Britain at the time of the French Revolution. 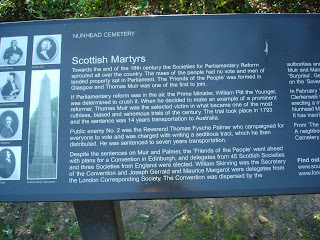 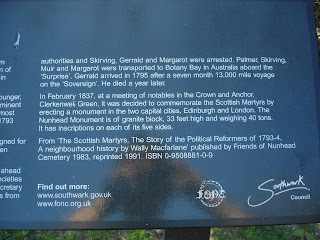 However, although I did not realise it at the time, I had heard something of Thomas Muir a few years before, through the powerful song Thomas Muir of Huntershill, as performed by Dick Gaughan, for the  story of Muir has become part of Scottish folk history. Stupidly, it was some time before I made the connection between the song and the memorial at Nunhead Cemetery. I had also had a vague awareness that there was a secondary school somewhere in the west of Scotland called Thomas Muir High School. However, again, I had kept this information in a completely separate compartment of my brain.

So who was Thomas Muir? Muir was an able and eloquent lawyer who campaigned for legal and Parliamentary reform. He joined the Scottish Association of the Society of the Friends of the People, an organisation started in England in support of the principles of the French Revolution. The Scottish wing had a broader membership than the English partly because of the lower subscription rates but also because of the higher levels of education in Scotland, and included industrial, though not agricultural, workers. In the words of the song:

Yes, I spoke to Paisley weavers and addressed the city's youth
For neither age nor class should be a barrier to the truth

The Scottish Association was in touch with a republican group called the Society of United Irishmen. Despite some unionist supporters, members of the Friends of the People in Scotland were to all intents and purposes Scottish republicans. Spied on by agents placed within his household and community, Muir was soon tried for sedition and, like others, given the punitive sentence of 14 years transportation. The jury was packed with Tory supporters and the judge, Lord Braxfield, was notoriously biased in his conduct of the trial and final sentencing.

Robert Burns' song Scots wha hae wi Wallace bled, although ostensibly about the words of Robert Bruce before the battle of Bannockburn, were written at the time of Thomas Muir's arrest and are believed by some to be a covert reference to Muir and what he stood for.

In 1794, Muir was duly transported but escaped after two or three years. He tried to reach America but ended up in Mexico and then Cuba as a prisoner of the Spanish. He had part of his face blown off in an encounter with a British man-of-war and was eventually released into the care of the French authorities. France welcomed him like a hero but he died as the result of his injuries, in January 1799.

Shortly before he died, Muir made this statement:

We have achieved a great duty in these critical times. After the destruction of so many years, we have been the first to revive the spirit of our country and give it a National Existence.

Eventually, last month, I tracked down the Edinburgh monument to the Scottish Martyrs. 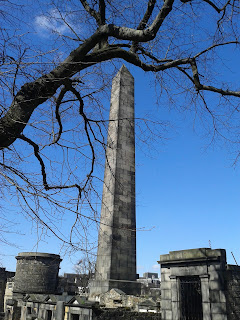 The obelisk, very similar to its Nunhead counterpart, is in the Old Calton Cemetery on Waterloo Place, a few yards from the junction between Princes' Street and Leith Street and next door to the old Governor's House. 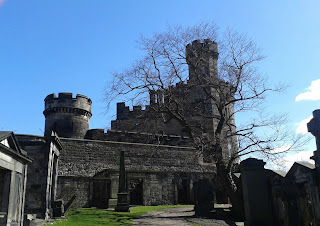 This crowded city-centre graveyard could not be more different from the grassy tree-covered walks of Nunhead. The Old Calton Cemetery was established in 1718 at the request of the inhabitants of the village of Calton who until then had had to take their dead to Leith for burial. It is the last resting place of several Edinburgh notables, including David Hume, the philosopher. 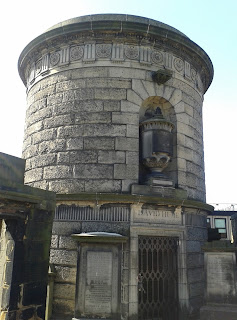 The memorial to the Scottish Martyrs is the most prominent monument in the graveyard, towering as it does above the low structures around it, and is visible for quite some distance. You can just make out the names of the five Scottish Martyrs on the base of the plinth, although you have to do a bit of clambering to get close. 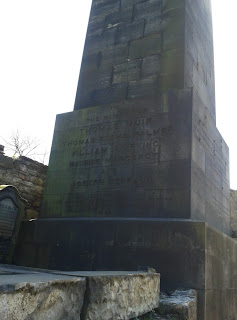 To The Memory Of Thomas Muir, Thomas Fyshe Palmer, William Skirving, Maurice Margarot and Joseph Gerrald. Erected by the Friends of Parliamentary Reform in England and Scotland, 1844

Strangely, Edinburgh City Council, which has listed the key burials and memorials on a board at the entrance to the graveyard, has not thought to include the name of Thomas Muir and his colleagues, hence my difficulty in locating exactly in which graveyard the monument had been erected. At that time I didn't really know what I was looking for. 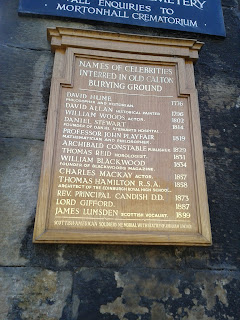 Here above is the list of these notable establishment figures with, at the bottom, a reference to the memorial to the Scottish soldiers who fought for freedom on the side of the Union during the American Civil War. 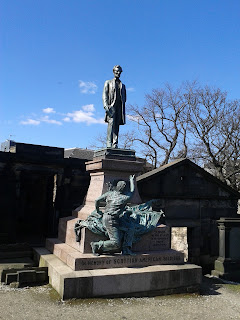 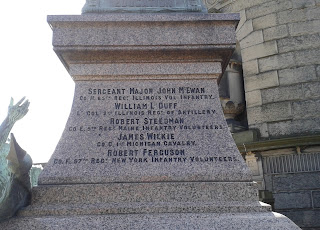 It is good to see recorded the cause for which these soldiers gave their lives. 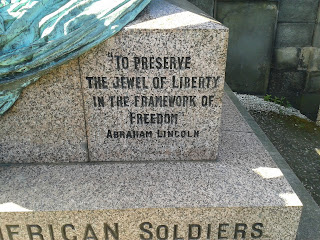 That cause, the fight for liberty, resonates with the earlier struggles of the Scottish Martyrs. On the base of their memorial are carved words from the speech Thomas Muir delivered during his trial. 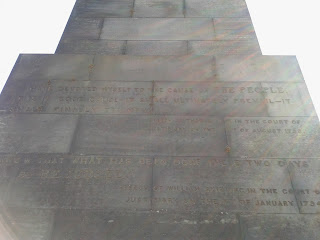 I have devoted myself to the cause of The People. It is a good cause - It shall ultimately prevail - It shall finally triumph.

Also on the plinth are these words, delivered by his fellow Martyr, William Skirving:

I know that what has been done these two days will be Re-Judged.

Skirving may have been referring to his Maker. However, following the passing of the Scottish Reform Act in 1832, the Martyrs were themselves pardoned by the State.

It is is a pity that the council has made little attempt to guide locals and visitors towards the memorial, or to explain its significance. Is it because Muir was such an anti-establishment figure? Is it because he was tried and sentenced by his fellow countrymen rather than the dastardly English, although they no doubt approved? Still, he has been appropriately remembered by East Dunbartonshire Council who contributed to the building of a memorial at Huntershill in Bishopbriggs.

The website of Bishopbriggs Academy, the school formed from a merger between Bishopbriggs High School and Thomas Muir High School in 2003, bears as good as no reference to Thomas Muir. I was expecting to see some reflection of his principles in the school's vision and its statement of what it was aiming for in educating its young people. The nearest there is to any recognition is an account of plays about Thomas Muir written by S2 pupils a couple of years ago.

I have already mentioned my own ignorance about the events of the late 1700s, so perhaps this limited public recognition is not so surprising. After all, these early reformers are not as romantic as Bonnie Prince Charlie. At school we learned about the Chartists and the Reform movement of the 1830s and 40s. However, I do not recall any references to the Radicals of fifty years earlier. I also don't know whether study of their activities form part of the history and/or modern studies curriculum currently followed by Scottish school children. I do hope so.

Why my concern that young people should know something of  Thomas Muir and what he stood for?

Let's go back to the last verse of the song I referred to earlier.

Gerrard, Palmer, Skirving, Thomas Muir and Margarot
These are names that every Scottish man and woman ought to know
Remember Thomas Muir of Huntershill
When you're called for jury service, when your name is drawn by lot
When you vote in an election when you freely voice your thought
Don't take these things for granted, for dearly were they bought


For more information, refer to:
The guide to the Scottish Political Martyrs published by the Friends of Nunhead Cemetery.
The Scottish Nation 1700-2007 by TM Devine, or one of his other books.
You will find Dick Gaughan's rendering of Remember Thomas Muir of Huntershill on Spotify or on one of the CDs listed on his website.

Posted by Elisabeth Ritchie at 18:05