Glenelg, the Highland village at the end of the road 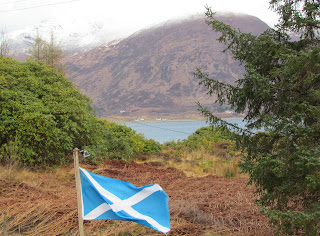 Glenelg is not a place one comes across by accident. Your journey there is marked by purpose not serendipity. You see, Glenelg is a village you have to try very hard to get to.  Yes, get to, not find. For Glenelg is very easy to find: one road in and the same road out, unless you go over the sea to Skye, of course. 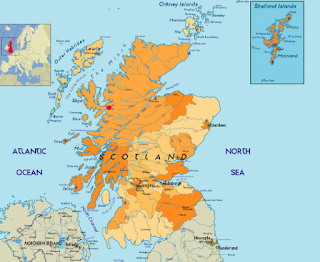 The red dot on the map above shows Glenelg's rough position, facing Skye across the narrow Kyle Rhea straits: so narrow, that until the end of the nineteenth century, the small black Highland cattle from Skye used to swim the crossing before being driven south to market. Each cow is said to have held the tail of the cow in front in its mouth to stop them panicking and swimming away from the herd. In the photo below you can see the water-meadows of Glenelg in the foreground. If you follow the road round the hill beyond, you reach the ferry across the sea to Skye, now the only ferry since the building of the Skye Bridge at Kyle of Lochalsh.. 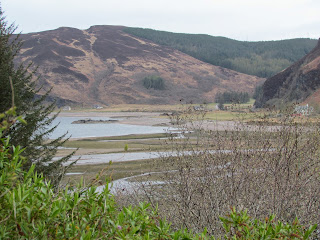 Handsome red Highland cattle, like this one from Arnisdale along the road from Glenelg, are far more common than the old black cattle these days, and no doubt their motorised transportation meets a string of European Union rules and regulations. 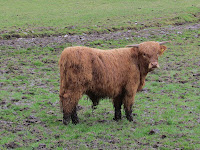 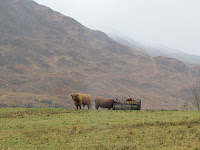 I have been making periodic visits to Glenelg for the best part of twenty years now. The journey is wonderful. From Inverness, you drive down Loch Ness and turn right through Glen Morriston, along Loch Cluanie and then down to Glen Shiel. (From Edinburgh, it's up the A9, turn left at Dalwhinnie to Spean Bridge, turn right along Loch Lochie and then down through Glen Garry to join the same road.) Keep going until you see a sign to the left at Shiel Bridge, shortly before you reach Eilean Donan Castle at Dornie. The sign directs you to the spectacular - and hair-raising - Mam Ratigan pass, the only way into Glenelg. On an enlarged version of the map below you may just be able to make out a faint blue line running from the east to the red dot of Glenelg in the west: the Old Military Road. 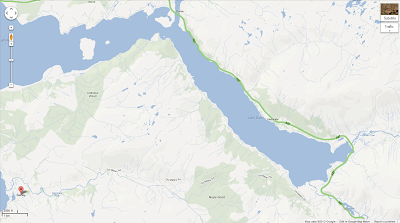 The road to Glenelg was built by General Wade in the 1720s as part of the strategy to pacify the Highlands. Bernera Barracks, one of four linked sets of barracks built at a similar time, are still mouldering into the turf of Glenelg. (The other barracks are Ruthven on the A9 near Kingussie, Fort George near Inverness and Fort Augustus at the south-west end of Loch Ness.) The purpose of the Bernera Barracks was to control the crossing from Glenelg to Skye.

The eastern end of the road (the Mam, as it is called) climbs up steeply from Loch Duich, 339 metres in no time at all, with magnificent views back to the Five Sisters of Kintail. The road then clings to the hillside high above Glen Mhor, gradually descending to Glenelg. My calm rational description of this journey belies the gibbering wreck I have usually become by the time I have reached the end of the Mam. However, the drive is worth it, believe me. And the road has significantly improved over the last couple of years. It has, I assure you. This year I managed it (as a passenger!) with scarcely a twinge.

So, why would one bother to go to Glenelg given all the trouble it takes to get there?

Well, people have been making the journey for thousands of years. Two thousand years ago, a tribe which probably originated in Ireland to the west, left the shore on which they landed and moved up Glen Beag, past the waterfall and into the broad flat strath. 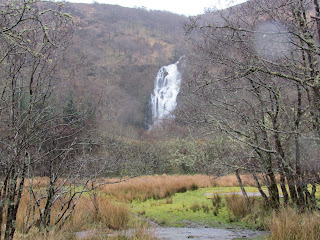 There they built three beehive-shaped homesteads in a line down the glen. The best preserved of these, Dun Telve, is the most complete example of a broch on the Scottish mainland. (Dun Carloway in Lewis and Mousa Broch in Shetland are excellent examples of brochs on islands.) 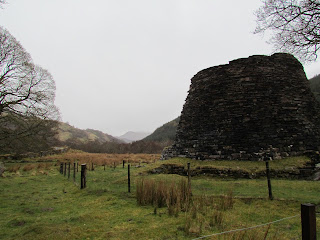 Dun Troddan, further up the Glen Beag, is just a ruckle of stones.

It is very easy to imagine people and animals sheltering within Dun Telve's tall drystone walls, below what was probably a turf roof. The double-skinned structure makes for a solid building, one which only started disintegrating in the 18th century as the result of stone being removed for use in construction elsewhere  (probably the barracks). 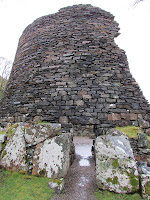 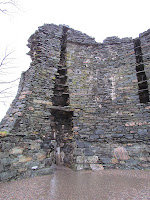 There was probably at least one wooden floor above ground level supported by stone ledges. 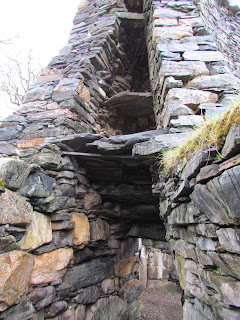 With good views up and down the glen, the residents would have been well prepared for any trouble. 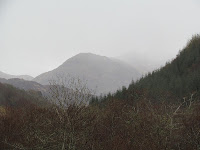 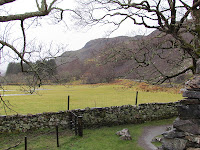 So much for the prehistoric population. What about now, though? Who lives in such an 'out-of-the-way' place as Glenelg and the nearby settlements of Arnisdale and Corran right at the end of the road?

Well, all along the shoreline of Glenelg Bay and round into the fjord of Loch Hourn lies a string of low white cottages, clustering at the foot of mountains still topped with snow in May. 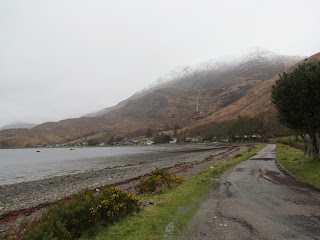 Deer graze around the crofts, driven off the hillsides by thin grass and winter hunger. 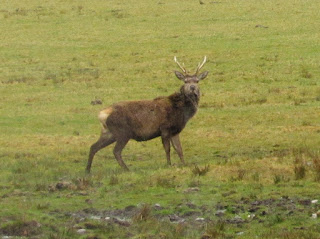 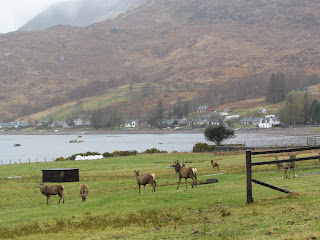 Spring lambs scamper around their mothers. 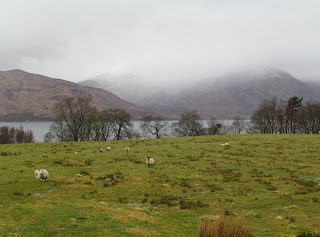 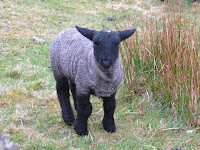 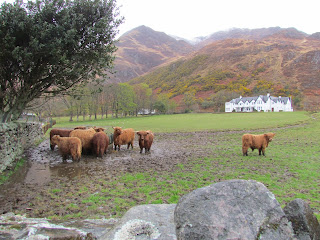 Gavin Maxwell, author of Ring of Bright Water, once lived along the coast from Glenelg, giving the fictional name Camusfearna to his croft at Sandaig. The Sound of Sleat dividing the mainland from Skye is scattered with small islands, many not much more than rocks.. 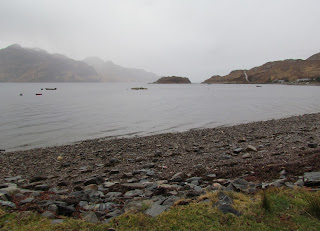 Across the Sound, the mountains of Skye rear up, rising straight  from the sea. Not many people live on their bare slopes. 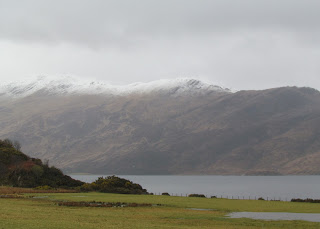 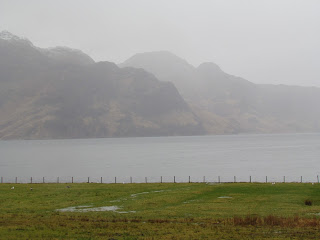 Soon we are at Corran. Here we have to stop for the road goes no further. 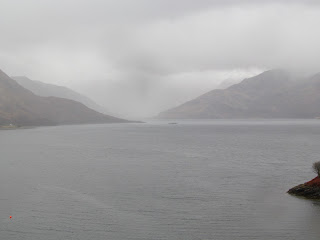 We peer through the mist down Loch Hourn. Only Knoydart lies beyond and there are no roads there. All we can do now is turn back.


Postscript
Last year, much to the irritation and, indeed, fury of many of its inhabitants, Glenelg in the Highlands was officially twinned with Glenelg on Mars, a site which NASA decided its Curiosity Rover would visit twice. The name Glenelg was considered appropriate because it is a palindrome: the same letters in the same order whether spelt backwards or forward.

Posted by Elisabeth Ritchie at 17:22