A day out from London: Canterbury, its cathedral and a very famous murder

As soon as you reach Canterbury, a cathedral town fifty miles south of London, you can see that it has escaped much of the blandness which afflicts so many British towns. The city walls may be surrounded by car parks, but they sit just as solid as they always did. 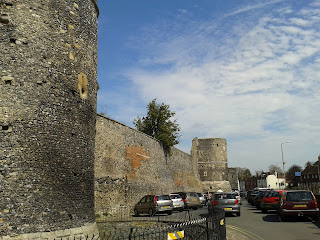 And, of course, the cathedral remains the same as it has for centuries. 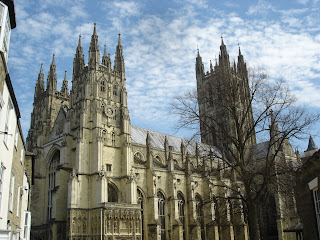 The Cathedral has a special role as Mother Church for the worldwide Anglican Communion. Its history, if not its building, goes back more than 1,500 years. So much so distinctive, then.

The story goes that Christianity entered Britain when St Augustine, leader of the missionaries sent from Rome by Pope Gregory I, landed in Kent in AD 597 and established his base in Canterbury. From here the rest of the island was converted.

In actual fact, Christian churches had already existed in the British Isles for many years when St Augustine arrived, some 'planted' by earlier missionaries from Rome and some 'home-grown'. The Celtic (or Insular) Church practised forms of Christianity which were quite distinctive from the Roman variety. However, it was no match for the huge power and influence of the Roman multi-national. The slow confident march of St Augustine's church was unstoppable and within a few centuries Wales, Scotland, Cornwall, the Isle of Man and Ireland had lost their distinctive regional brands of Christianity.

The town of Canterbury itself retains many of its distinctive features, not too much homogeneity here. The streets are winding and narrow, and the buildings lean over towards each so that in some places they almost touch. 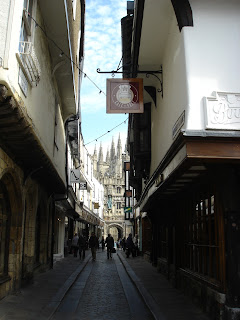 Canterbury is a douce town, to use a Scottish term. Old structures rise up among the modern shops - here an elaborate church gate, almost fortified in appearance. 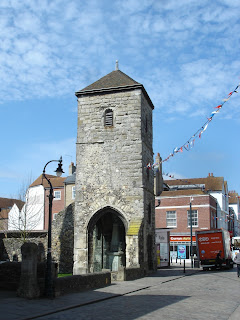 However, even Canterbury suffers from the inevitable advance of national and international brands. A lorry from the international carrier TNT took 10 minutes to manoeuvre itself  round this attractive square. 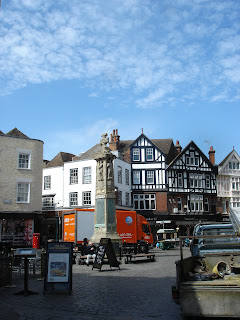 Even the Edinburgh Woollen Mill has found its way this far south, and in the tourist shop below, one of the shelves sports a row of shisha pipes: very international! 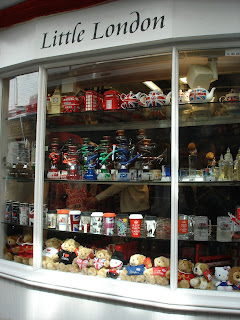 Perhaps this gradual loss of local identity within the blandness of the international and multi-national is inevitable. On a trivial level, we all end up eating tikka masala and lasagna.

However, Canterbury also stands for the assertion of important rights and principles. It was here, in Canterbury that one of the most violent conflicts in the Middle Ages came to a head. A huge multi-national company, the Catholic Church, decided to take on the King of England, Henry II, and his council. Under its English chief executive, Archbishop Thomas à Becket, the Church refused to acknowledge the sovereignty of the monarch over matters it considered fell within the Church's control.

Thomas was the son of a Norman tradesman. That meant that in origin he was halfway up the social scale: not as powerful as the Norman aristocrats above him but with a great deal more freedom than the Saxon peasantry. Having received a basic education at his London grammar school, he was taken on by the Church as a promising administrator, worked his way up and became Henry's Chancellor. They clearly got on together very well so Henry decided to appoint Thomas as the new Archbishop of Canterbury. In this way the wily king hoped to rein in the Church, which was answerable almost entirely to the Pope in Rome and was very difficult to influence, let alone govern. Henry found it extremely difficult to get the Church to pay its dues, for example. What was worse, he needed the money to pursue his own European ambitions.

Alas, no sooner was Thomas in post than he seems to have decided to take his arch-episcopal role seriously, much to Henry's displeasure. Thomas relinquished the Chancellorship to give himself room for manoeuvre and challenged Henry head on.

And what were the grounds on which Thomas based his confrontation? One was the right of priests who had broken the country's law to be tried and punished by the Church rather than the civil authorities. To us this may not seem that much different from 20th century Church authorities in Ireland, Britain and the USA protecting their paedophile priests from arrest and trial under their country's legal systems. Not a cause most of us have much sympathy with, then.

Another issue on which Thomas challenged Henry was his right to crown Henry's successor, another Henry. (In those days, a son could be crowned while his father was still alive and work as a regent under him.) Henry had given the responsibility to the Archbishop of York as Thomas had been abroad in France at the time. He had fled from the English authorities and had remained abroad for seven years.

Thomas' response to these slights on the Church was to excommunicate the people he found responsible. And he ended up excommunicating a lot of people. We may not regard excommunication as all that important, these days. However, in mediaeval times, people believed that if they died outside the spiritual comforts of the Church, they would be damned. And sudden death was an ever-present possibility. In a culture which had plenty of nasty physical punishments, the psychological punishment of excommunication was terrible.

So, looked at from a 21st century perspective, Thomas was fighting the 'wrong' battles. He was leading the Starbucks of his day in opposition to the accepted governance of the country.

It all ended horribly. Four of Henry's knights took it upon themselves to interpret some rash words of his as permission to assassinate the Archbishop - targeted assassination. Even worse, the crime took place within the Cathedral itself.

Soon afterwards, the inevitable miracles started happening and Thomas was made a saint by the Pope - a very clever move. Thus Thomas won the post-mortem struggle hands down. Henry, however, suffered the mortification of having to do penance by his dead Archbishop's tomb.

And then the tourists started coming: pilgrims, thousands and thousands of them, many, like Chaucer's pilgrims, starting their journey at Southwark on the outskirts of London. Others were international pilgrims, fitting in Canterbury after a trip to Santiago de Compostela, much as modern twenty-somethings trek from Thailand to Peru. Thomas' shrine was destroyed by Henry VIII but is marked by a candle burning in the Trinity Chapel, behind the choir and high altar. 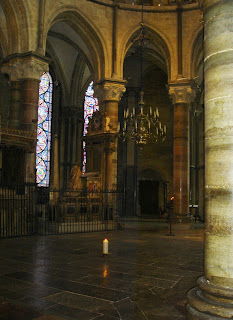 The money the pilgrims bought rebuilt the Cathedral, and magnificent it certainly is. Light floods the nave and illuminates the graceful columns and arching roofs. 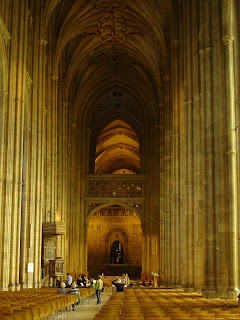 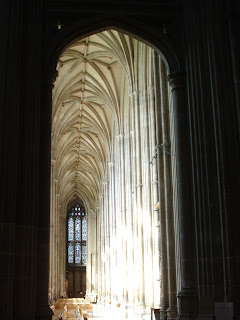 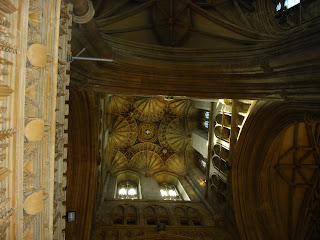 Canterbury has the largest Chapter House in Britain, a long room with a wonderful ceiling where decisions about the business of the Church were made by the Dean and canons, each of whom had a stone seat round the walls. 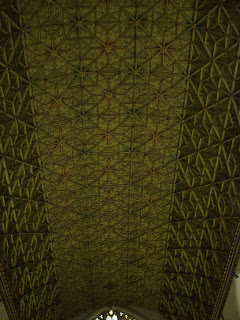 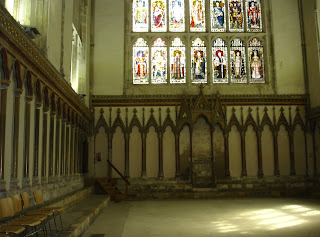 The Great Cloister is an oasis of peace. 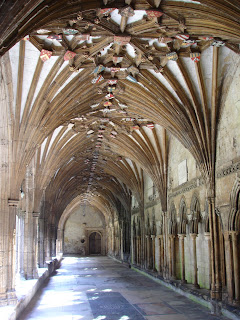 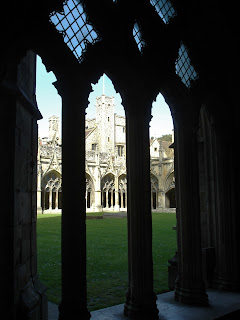 Yet, there is another way of looking at things. Canterbury is more than a monument to an outmoded view of the Church as God's Multi-national Company on Earth. Canterbury marks the point at which Church leaders who may have, up till then rightly made an accommodation with the State, decide that they can compromise no more. It marks the spot where Christians make a stand. It may not always be the right stand, taken at the right time and made in the right way, but it is a stand.

The Corona Chapel where Thomas' head used to be kept as a relic was in 1978 rededicated to the Saints and Martyrs of our own Time. 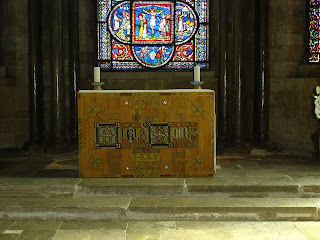 Here are remembered people like Dietrick Bonhoeffer, Archbishop Romero and Archbishop Luwum of Uganda, among many others. 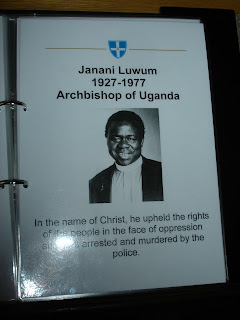 Thomas à  Becket took the stand he knew he had to take within the context, culture and political environment of his time. It was a similar stand to that taken by Thomas More four centuries later: Church versus State. Both Thomases were flawed men, despite the canonisation they underwent after death. Thomas More burned many 'heretics' at the stake; his stand was not about the right to freedom of thought and belief. The battle between More and Henry VIII was not just about divorce; it was about the jurisdiction of the Pope over the kingdom of England. This time the King won, and Canterbury became the foremost church in the new Church of England.

Many of us these days may have little sympathy with the cause of Thomas à  Becket. The organisation he represented was an international empire. However, it was an empire which rose above the hubris and political power struggles of individual kings and kingdoms - which does not mean, of course, that the Church was without hubris or political power struggles itself. The Church educated those from modest backgrounds and enabled the kind of social movement not possible within the secular feudal system. Great figures like Cardinal Wolsey rose from almost nothing. As did Thomas, of course. The Church educated women, though at a cost. However, life in a convent where you were fed and clothed and could study was not necessarily worse than a life shortened by constant pregnancy and childbirth. Would Julian of Norwich or Hildegard of Bingen have produced their great work if they had been married to great lords and spent their lives on embroidery? It was often from church-educated intellectuals that the great challenges to authority have come.

I suppose what places like Canterbury do is to invite us to think about the causes for which we ourselves would make a stand. Would we Dare to be a Daniel...? What is the modern version of the kind of stand Thomas à Becket made?

The words of Martin Niemöller, a member of the Protestant Confessing Church during the rise of the Nazis, are very well known, and appear in a number of different versions.


Canterbury is a place where we remember a man who spoke out.

Postscript
Two famous plays have been written about the martyrdom of Thomas à Becket:

Murder in the Cathedral by TS Eliot. You can also buy an audio CD.

Anouilh's play was made into a successful film now on DVD, also called Becket, starring Richard Burton, Peter O'Toole and John Gielgud. The DVD includes an interesting commentary by Peter O'Toole on the making of the film. The film is very much in tune with Anouilh's script although it makes Becket a Saxon in a Norman court.


Posted by Elisabeth Ritchie at 23:28