Exploring the secrets of the Royal Mile

What part of Edinburgh could be better known than the High Street, or Royal Mile, which runs from the Royal Palace of Holyrood up the 'tail' of the volcanic core to the royal fortifications on Castle Rock itself? What secrets can the crowded cobbles still hold for the visitor? Answer: more than you would think.

Tourists may crowd round the street artists, pounce on the tartan tat of the souvenir shops and photograph each other entwined with the nearest bagpiper. Locals like us may tut in irritation as visitors spill out over the carriageway, forcing us to weave our way among orange 'Jimmy' wigs and cut-price kilts. However, a few steps down a quiet close ('close': a lane 'enclosed' by buildings) stand the hidden mansions of executed aristocrats and a few metres below our feet lie the secret vaults of an underground city which once swarmed with the destitute and desperate. 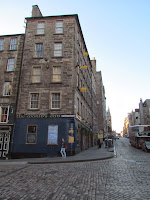 We are going to start our walk where we finished in Part 1 of this series of posts, At the foot of the Royal Mile: Abbeyhill, Holyrood and the Canongate, slightly illogical I know, but we made a detour up Calton Hill in the middle of it (Calton Hill, Greek temples and the Scottish struggle for democracy). So today's walk begins where the Canongate ends and the ancient City of Edinburgh begins, at the aptly named World's End pub, which stands on the corner of St Mary's Street and the Royal Mile. For most people these days, the name World's End brings back the memory of a notorious Edinburgh murder of twenty years or so ago. However, four hundred years ago one of the main gates into the city stood near here, the Netherbow Port. Originally constructed in 1513, though rebuilt a couple of times thereafter, it came complete with the regulation severed heads on pikes which no respectable city gate could do without in the sixteenth and seventeenth centuries. Usually adorned by criminals, in time covenanting preachers also donated their heads. They were not sufficient to scare away Bonnie Prince Charlie, however, who captured the gate in 1745.

This corner of the city really did represent the end of the world for the citizens of Edinburgh. They had been horrified and terrified by the defeat in 1513 of one of their greatest kings, James IV on Flodden Field. Having rashly attacked the English in defence of his ungrateful French allies, he paid with his life and the near-destruction of Scotland's capital city. The aristocrats living in the Cowgate which ran through a deep valley parallel to the High Street and at the foot of St Mary's Street, suddenly discovered that they were very vulnerable. 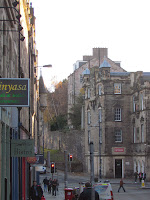 As the last of the dead were being cleared from the battlefield, the citizens of Edinburgh set to and built a defensive wall, the Flodden Wall. You can still see remnants of it in Greyfriars Kirkyard and here, at the bottom of St Mary's Street. If you look carefully at the photo on the left, you may just be able to make out the wall, in the centre of the picture just beyond the traffic lights. The wall took in Greyfriars as far as Lauriston and ran along what is now Bristo Square, down the Pleasance, up St Mary's Street crossing the High Street by the Netherbow before descending the other side down to the No'r (North) Loch, now Waverley Station and Princes Street Gardens. Inside is the area which is now known as the Old Town. 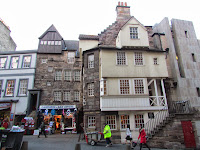 If you lived inside the city walls you were safe, so housing along the High Street was at a premium. Here is gabled Mowbray House built in 1462 and rebuilt in 1630. Daniel Defoe lived here in the early 1700s and became fearful of leaving it when he was accused of being an English government agent during the negotiations for the Treaty of Union. The white building to the right of it is John Knox House, built around 1472 and reconstructed in 1556. Knox, the great  church reformer, may have died here in 1572. This pattern of construction and reconstruction is typical of Old Town houses.

When every square yard had been occupied, the citizens resorted to building their houses higher and higher and digging out deeper and deeper cellars. Eight, nine or ten storeys were not uncommon, with commensurate layers of cellars within the foundations: the skyscrapers of the sixteenth and seventeenth centuries. Here aristocrats and beggars lived cheek by jowl in towering tenements, while the poorest of the poor squatted in the corners of chilly and waterlogged vaults, which stank of the sewage running down the walls. When the tenements burnt down, were abandoned, collapsed or became outdated, the landowners simply built on top. Gradually, the teeming dark tenements gave way to grander properties but underneath, the old city still persisted. 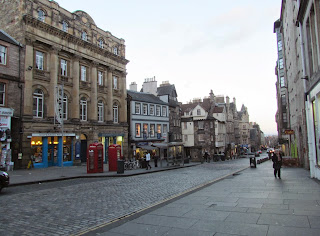 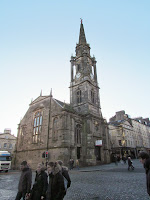 In time, the vaults and lower streets, now hidden below overhanging walls and covered over by walkways and more recent constructions, were forgotten. Only in the last twenty or thirty years have they emerged, sometimes when the current householders knock through a cellar wall and find a warren of passageways, underground lanes and dwellings of whose existence they had been blithely unaware. Beneath the floor of the Tron Church, for example, excavations have uncovered an underground street, Marlin Wynd, which ran from the High Street down to the Cowgate.It  was covered over when the church was built in 1637 to take in the congregation of St Giles when the latter became a cathedral. (Incidentally, the word 'tron' refers to the weighing machine which once stood here.)  The photo below  shows both church buildings, together with a lot of scaffolding, for the buildings which were built and rebuilt centuries ago, still need renovation. 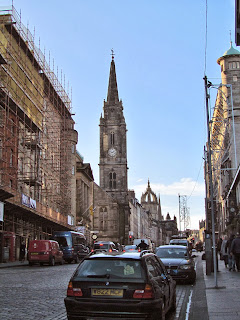 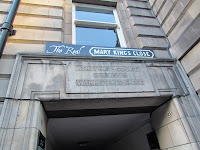 Further up the hill, you will see signs to Mary King's Close set into the façade of a grand Georgian building, part of Edinburgh City Chambers. Here steps lead down to a cobbled underground street which dates back at least two hundred years before the grand mansion above. The exit onto Cockburn Street (below) has long since been blocked off. These ordinary homes were occupied until the beginning of the twentieth century, their inhabitants living through plague, flood and fire. They are well worth a visit. 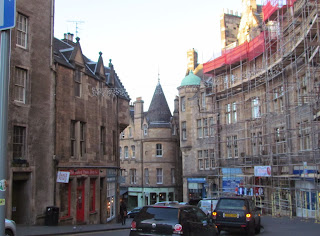 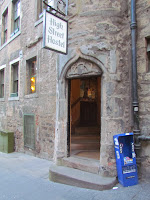 On the Cowgate side of the Royal Mile there are more secrets. Under South Bridge and down Blackfriars Street and its neighbours, the crowded tenements hide deep vaults, linked by a network of lanes. Originally used for storage, they eventually became the haunt of beggars, whores and thieves, as well as ordinary families which had fallen on hard times. People were born here and died here. Underneath the cobbles and floors of the capital was an alternative city, dark, threatening and foul whose inhabitants were almost as numerous as those of the streets above.

These buried Edinburgh streets inevitably attract tales of ghosts and ghouls, ruthlessly exploited for their publicity value by tour leaders whose stories you may find mawkish or macabre, depending on your temperament. You will almost certainly find them fascinating. 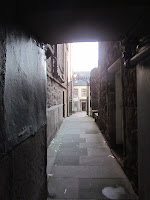 However, above ground the streets also abound in secrets. Don't be tempted to walk straight up and down the High Street. Turn off down the closes, follow the winding passage ways and vennels and you will come across unexpected treasures. For the Old Town is not just a tourist area. It still provides business accommodation and even family homes for contemporary citizens, often in the ancient mansions of the princes, dukes and prosperous merchants who preceded them. If you follow the narrow passageway of Tweeddale Close, for example, you reach Tweeddale Court, built for the daughter of the 1st Earl of Lothian and now occupied by the well-known publishers Canongate Press.

And so it goes on, close after close, lane after lane, some blocked off or filled with dustbins and the detritus of the local hostelries but others well preserved and well worth exploring, for hidden treasures abound. 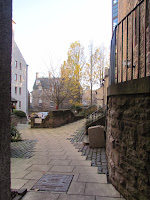 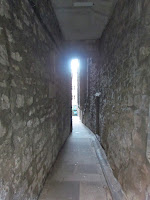 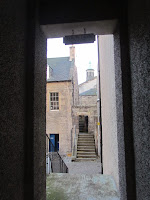 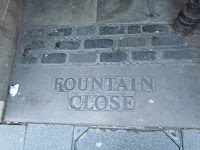 The names are worth noting as well. Fountain Close, for example, marks the location of the local water supply, subsequently moved across the road. You will see several of these old well-heads along the High Street. The first Bible published  in Scotland was printed in Fountain Close in 1574. 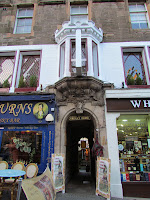 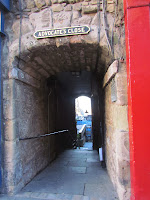 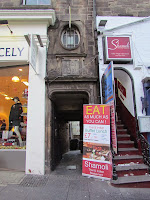 Many of the closes bear the names of the families who used to live there: Paisley Close, Bailie Fyfe's Close. 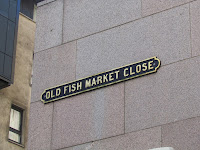 Some names mark the sites of earlier businesses and professions, such as Fleshmarket Close, Old Fish Market Close or Advocates Close. Where the original buildings have been demolished, those which replace them still bear the original names. 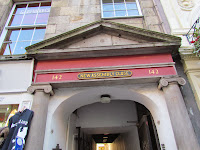 Enter New Assembly Close and you discover a beautiful Georgian building, once the Commercial Bank of Scotland. In the usual way of things, it had replaced the original sixteenth century mansion which stood there and the eighteenth century assembly rooms where dances used to be held.

Some of the closes on the south of the High Street lead you further and further into secret Edinburgh, while those to the north present unexpected vistas, sometimes extending as far as the Firth of Forth and the Kingdom of Fife. Occasionally, as below, you catch a glimpse of other architectural treasures, such as the Scott Monument. 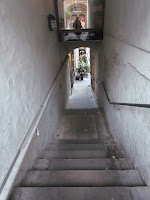 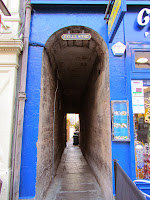 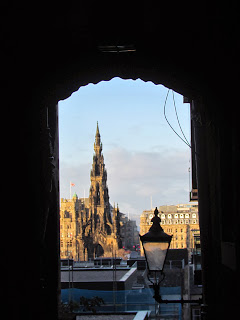 And always, behind the High Street itself, out of the sight of the tourists, lie the hidden mansions. 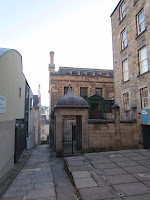 And, below their feet lie the decaying warrens of the poor.

There's more to the Royal Mile than immediately meets the eye.

You may find the following books of interest.

Posted by Elisabeth Ritchie at 19:25