A walk around Edinburgh's Parliament Square and St Giles: Power to the People, the Princes or the Prelates?

Today's walk is quite short, just a gentle amble around Parliament Square, the area around St Giles Cathedral. Some of the grandest buildings in Edinburgh stand here, and so they should for this was once the seat of Scottish government and the heart of many of the religious and political controversies which have made Scotland the country it is today. Here, over centuries, the Scottish people - or some of them - have attempted to wrest power from the Princes and the Prelates. Parliament Square may occupy a relatively small geographical area, but its cobblestones have witnessed some of the most significant events in Scottish history. 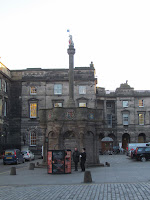 Here at the Mercat (market) Cross, Royal Proclamations such as the succession of a new monarch or the calling of a general election, are still made by heralds of the Lord Lyon. As always proclamations are made three days after they are pronounced in London. Three days are the time it takes a man on horseback to travel between the two capital cities. 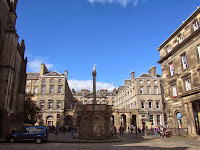 Sadly, the original cross, which was built in the 14th century or earlier, was demolished in 1756. Walter Scott managed to acquire five of its eight medallions and incorporated them into a garden wall at his home at Abbotsford, south of Edinburgh. The current cross, somewhat smaller than the original, was built in 1866 from some of the original stones, at the request of, and paid for by, William Ewart Gladstone, MP for Midlothian and the great 19th century British Prime Minister.

A few yards away from the current Mercat Cross you can see the site of the old one, marked as on the left. Here all manner of events have taken place over the centuries, some trivial everyday occurrences and some notable events. Ordinary wrongdoers underwent routine punishments here; were hanged or burnt alive for theft, forgery or murder. Those who fell foul of the shifting political and religious allegiances of 16th and 17th century Scotland were also punished here, for example, for saying Mass, after its ban in 1560. Ringleaders of various conspiracies and rebellions were executed here, as were the chief and leaders of Clan Gregor, notorious outlaws.

Here the accession to the throne of Charles II was proclaimed in 1649, despite the anti-Royalist Parliamentarians having taken power in England. When Cromwell's army occupied Edinburgh, the King's Arms were hanged from the public gallows and the inclusion of Scotland in the Commonwealth proclaimed at the Cross. Royalist leaders such as George Gordon, 2nd Marquis of Huntly and James Graham, 1st Marquis of Montrose were executed here. 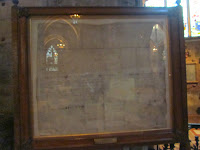 After the Restoration of the Monarchy in 1660, the retribution began with the execution of Archibald Campbell, 1st Marquis of Argyll. The Solemn League and Covenant, agreed in 1643 between the English Parliament and Scotland was burnt here in 1682. The Covenant stated that the reformed religion in Scotland should be preserved and the rights of popes, bishops and kings to determine religious practice removed. You can see signed originals of the Covenant in Greyfriars Kirk and here in St Giles Cathedral. Covenanters captured at the Battle of Bothwell Brig in 1679 were also executed at the Cross.

After the Monarchy had passed from the Stuarts to the Hanoverians, Charles Edward Stuart (Bonnie Prince Charlie) proclaimed his father King James VII and himself Regent of the kingdom at the Cross in 1745. Following his defeat at Culloden, the Jacobite colours were ceremonially burnt here. 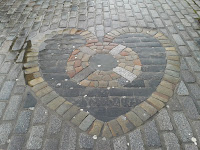 Scots traditions last long, well after the events which gave rise to them have lapsed from memory. I am always amused to see romantic couples posing for photographs on the Heart of Midlothian in West Parliament Square. The Heart marks the site of the Old Tolbooth, the prison from which those convicted of high treason after the Restoration were led to their deaths at the Mercat Cross. It is also, of course, the subject of the novel The Heart of Midlothian by Sir Walter Scott. Local citizens customarily spit on the Heart, a fact of which the brides whose voluminous skirts skim the cobbles seem to be entirely oblivious. 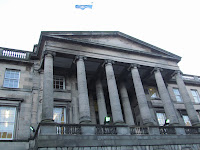 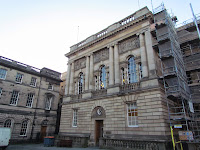 Until the adjournment of the Scottish Parliament in 1707, when the Act of Union came into force, Parliament Square was an important meeting place for politicians and lawyers, as Parliament House (built 1639) also contained the Court of Session. In a corner of the Square was the Signet Library. 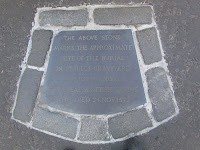 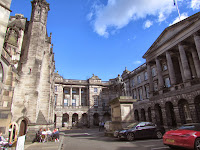 In front of the magnificent façade of the Law Courts stands a statue of Charles II, on of the first lead statues in Great Britain. One intriguing story is that the body of the great religious reformer, John Knox, lies beneath the car park at the foot of the statue, for Parliament Square was built over the old churchyard of St Giles. It seems an undignified, indeed unlikely, resting place, as the remains of all those buried here would have been removed at the time that Greyfriars Kirkyard became the main resting place of the worthies of Edinburgh. At Knox's funeral, the Regent said, 'There lies one who neither feared nor flattered any flesh.' Such pride and steadfastness have often been said to characterise the attitudes and actions of many Scots. 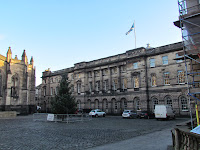 The wide space in front of the west end of St Giles is the finest part of Parliament Square - or so I think. On the left you see it complete with Christmas tree, but normally the only interruption to its cobbled expanse is the statue of the 5th Duke of Buccleugh.

Stand back a moment to admire the beautiful façade of St Giles, the High Kirk of Edinburgh, the winter sun turning it a warm honey colour. 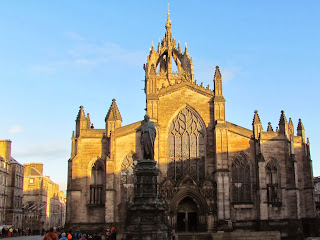 St Giles is the High Kirk of Edinburgh, but is commonly termed 'Cathedral' because for two short periods in the 17th century after the Restoration, Episcopalianism (a form of church government based on the rule of bishops, as in the Church of England) was reintroduced into Scotland. Edinburgh now had bishops whose see was St Giles. Before the Reformation, St Giles was not a cathedral because it fell within the diocese of St Andrews in the Kingdom of Fife. Although it now belongs to the established Church of Scotland, a bishop-less Presbyterian denomination, the term 'cathedral' has stuck. 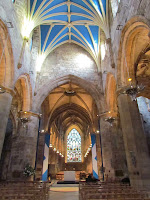 The St Giles you see today is a lovely uncluttered building. The building is light and airy, punctuated by solid stone pillars, the oldest of which go back to the original foundation in the 12th century. The roof soars, criss-crossed by delicate arches. It wasn't always like this, however. 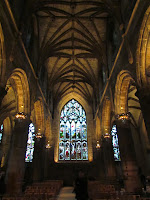 Before the Reformation, it had fifty individual chapels, endowed as chantries for priests to pray for the souls of the wealthy departed. The relics, including the arm bone of St Giles himself and other costly treasures are long gone, melted down or burnt. 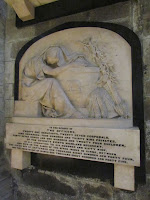 A couple of centuries later, several different Protestant congregations used to worship within the walls of St Giles, each behind their individual partitions. Presbyterians have often found it as difficult to agree with each other as to agree with members of other Churches. This independence of mind, indeed 'thrawnness', are characteristics not far removed from the 'pride' and 'steadfastness' I mentioned earlier. However,the encumbering dividing walls and attitudes have now disappeared, opening the building to light and air. 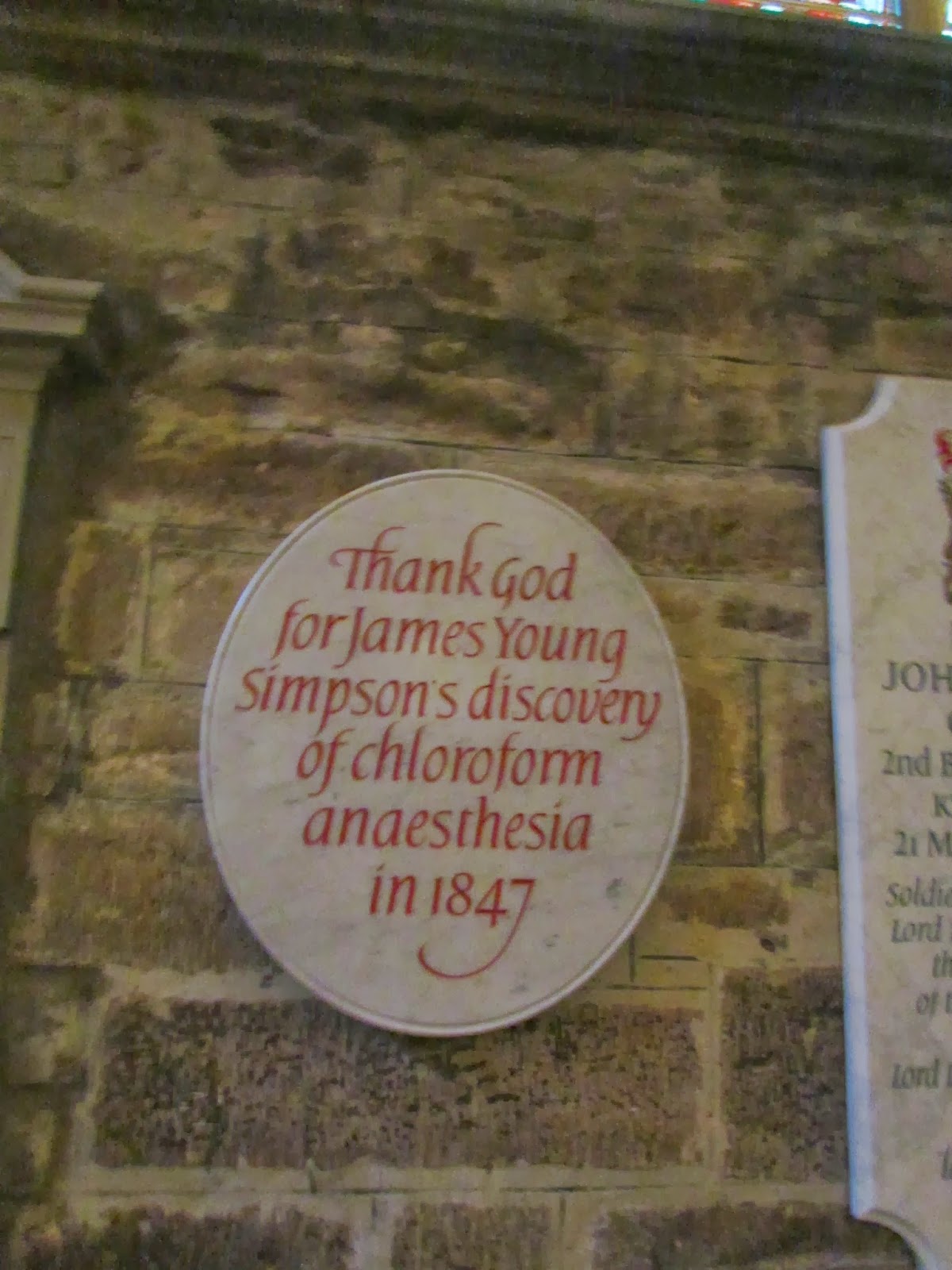 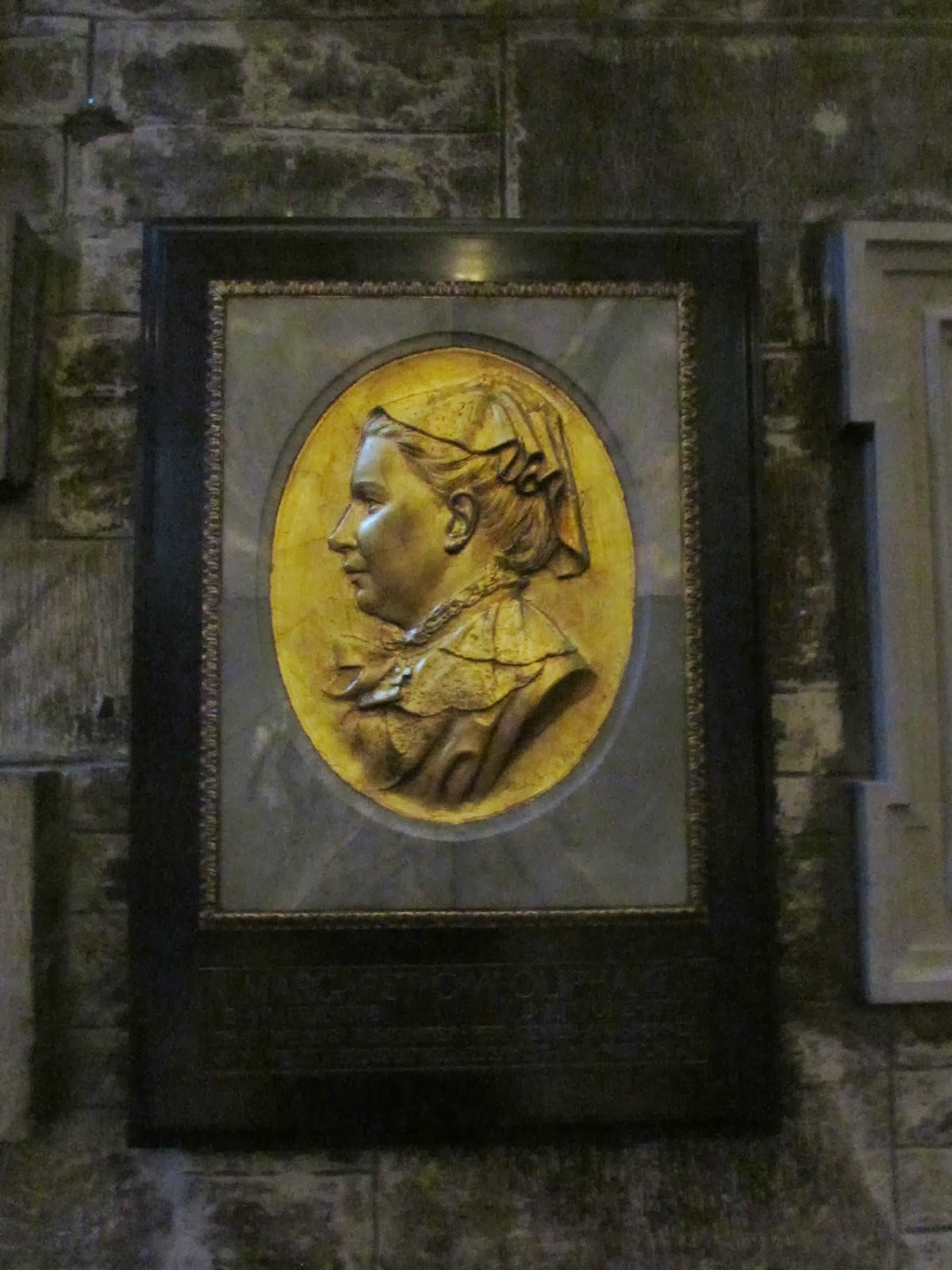 In its role as the High Kirk of Edinburgh, St Giles has its fair share of services for, and memorials to the Establishment and its famous figures. Here are tablets commemorating the terrible waste of young lives during empire-building 'adventures' in India and elsewhere. Robert Louis Stevenson is remembered here, the playwright Aphra Behn, university academics and practical scientists. In the Preston Aisle are row after row of military banners, some going back centuries. 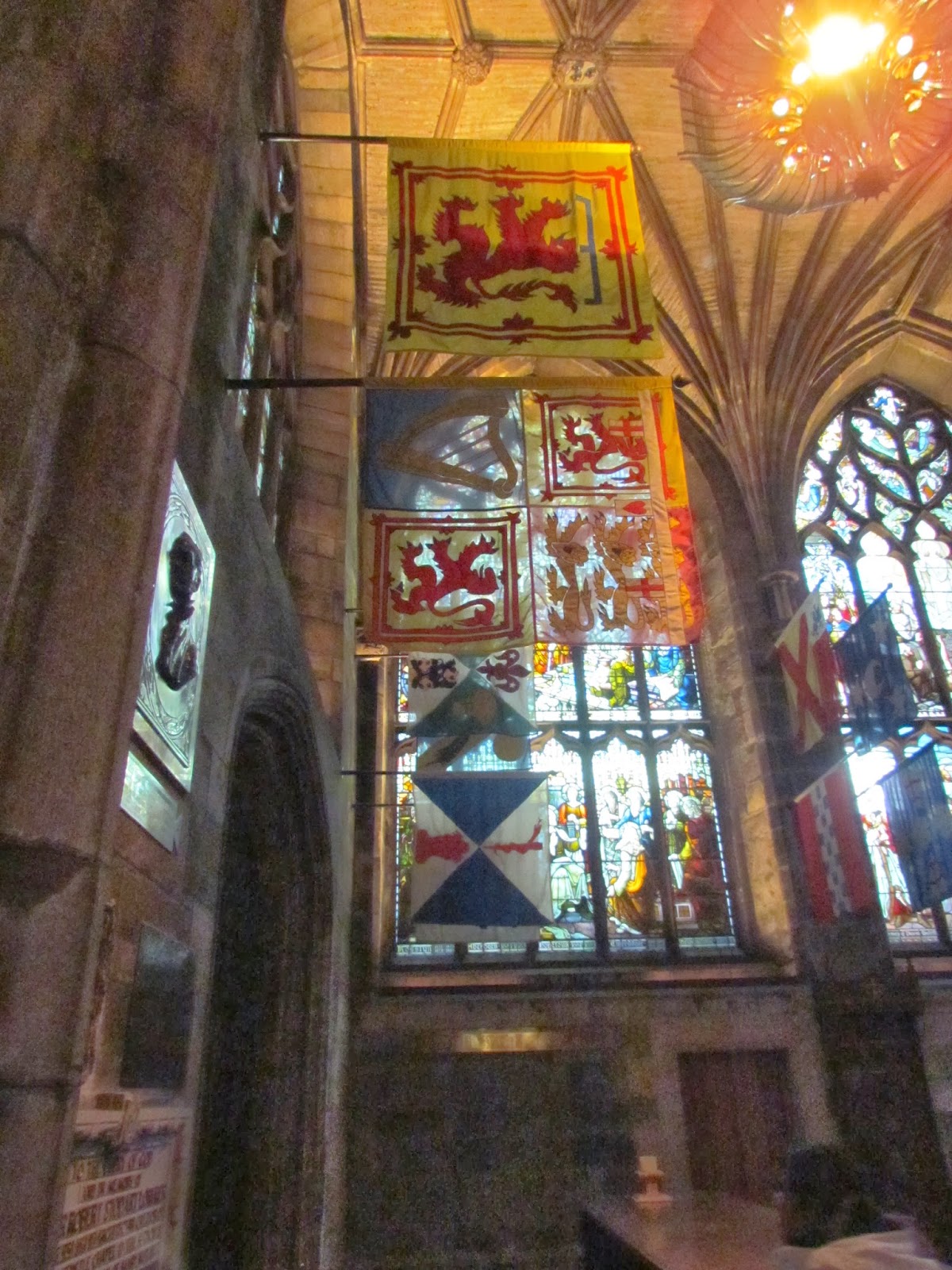 And at the east end of the Kirk, next to the door, is a wonderful treasure: the Thistle Chapel, where the Queen's Knights of the Thistle congregate before they process into church during St Giles' great set-piece celebrations. The chapel is not old: it was finished in 1911. The workmanship, however, is stunning. 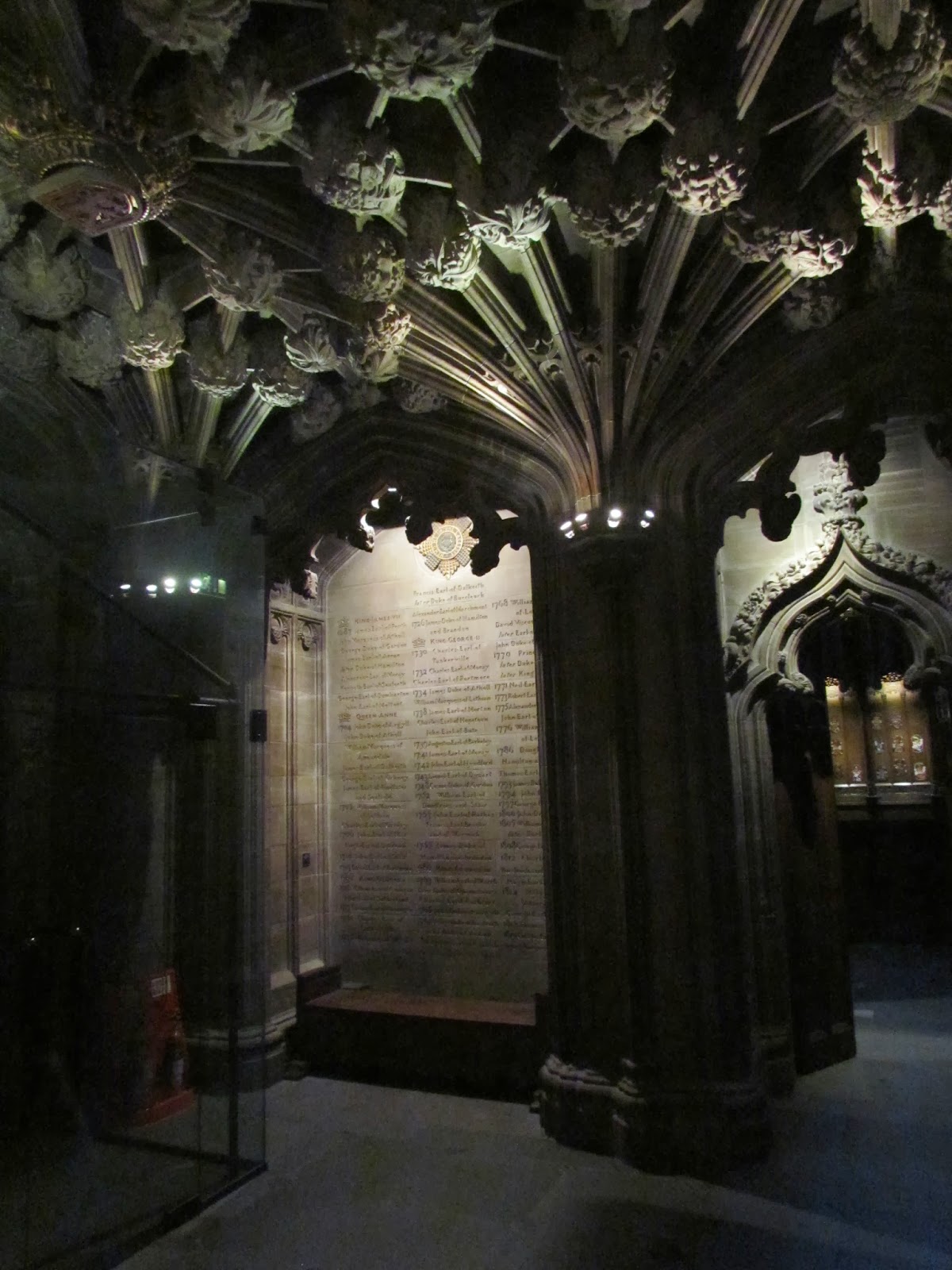 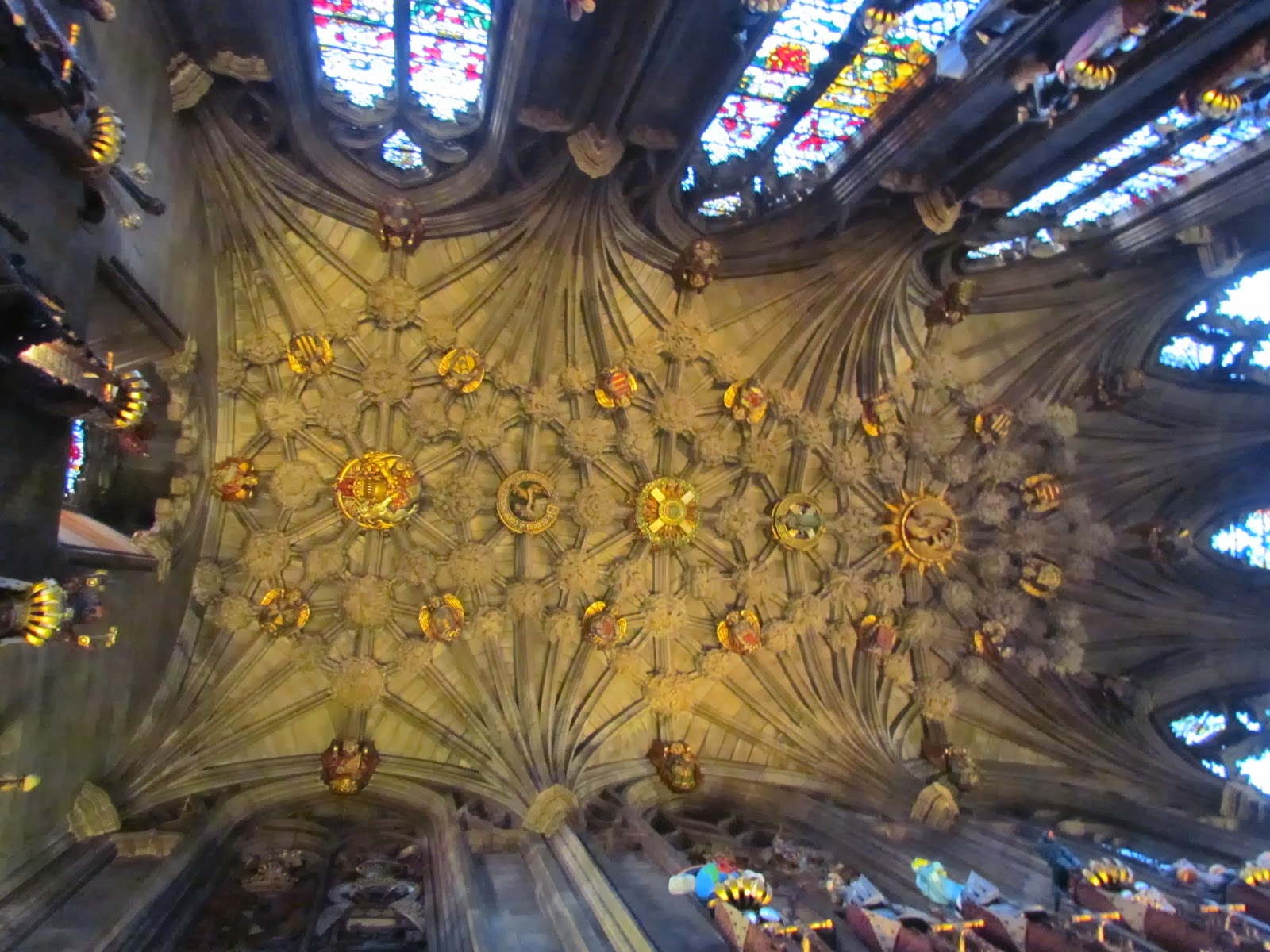 Stone bosses finish the 'branches' which appear to grow out of the pillars. The fine woodwork glows in the candlelight and the ceiling is studded with gilded heraldic devices.

So much, so Establishment. However, you don't need to walk far before you come across some of those great intransigents of the past. Here is John Knox himself in an early 19th century representation. 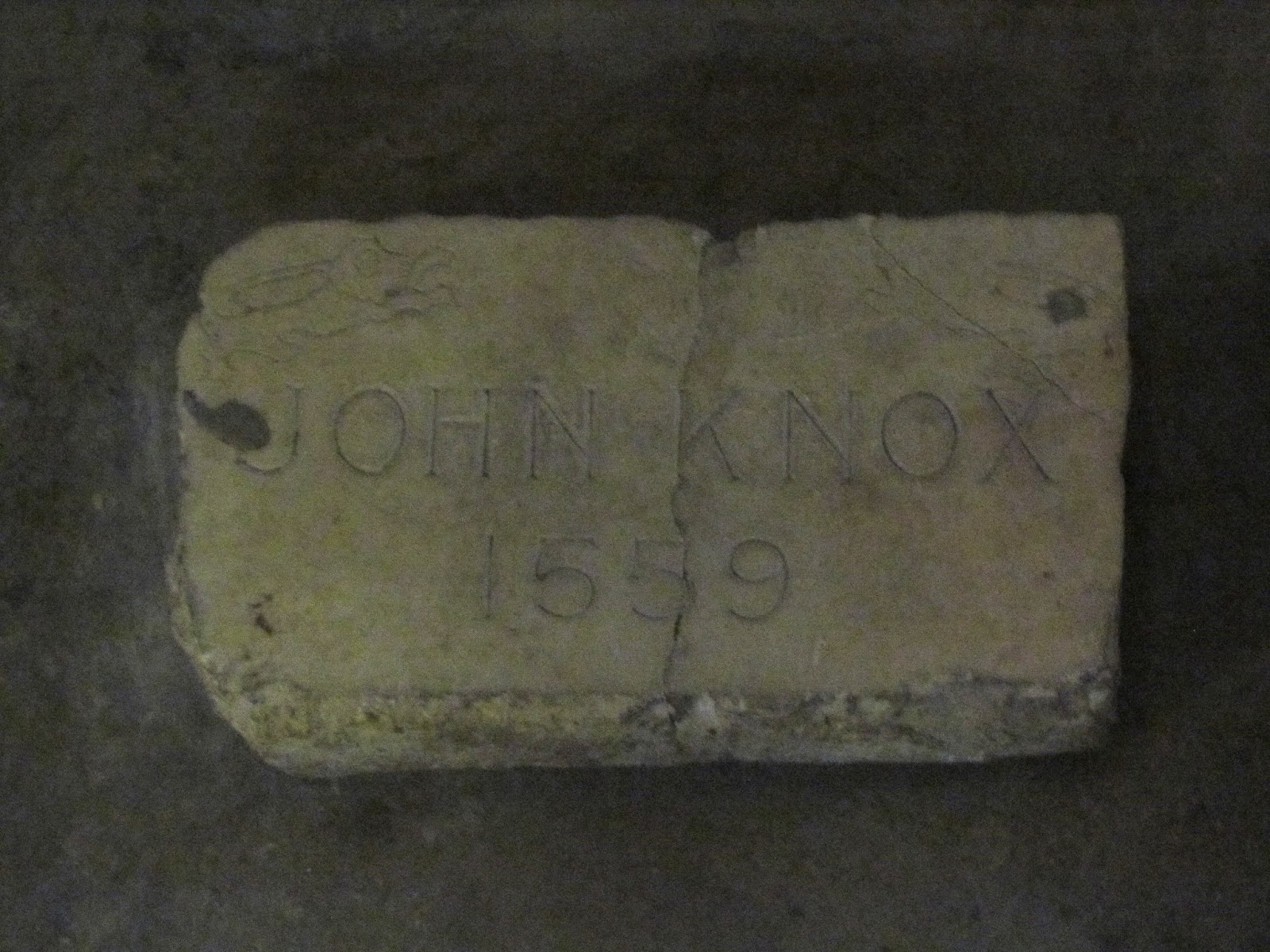 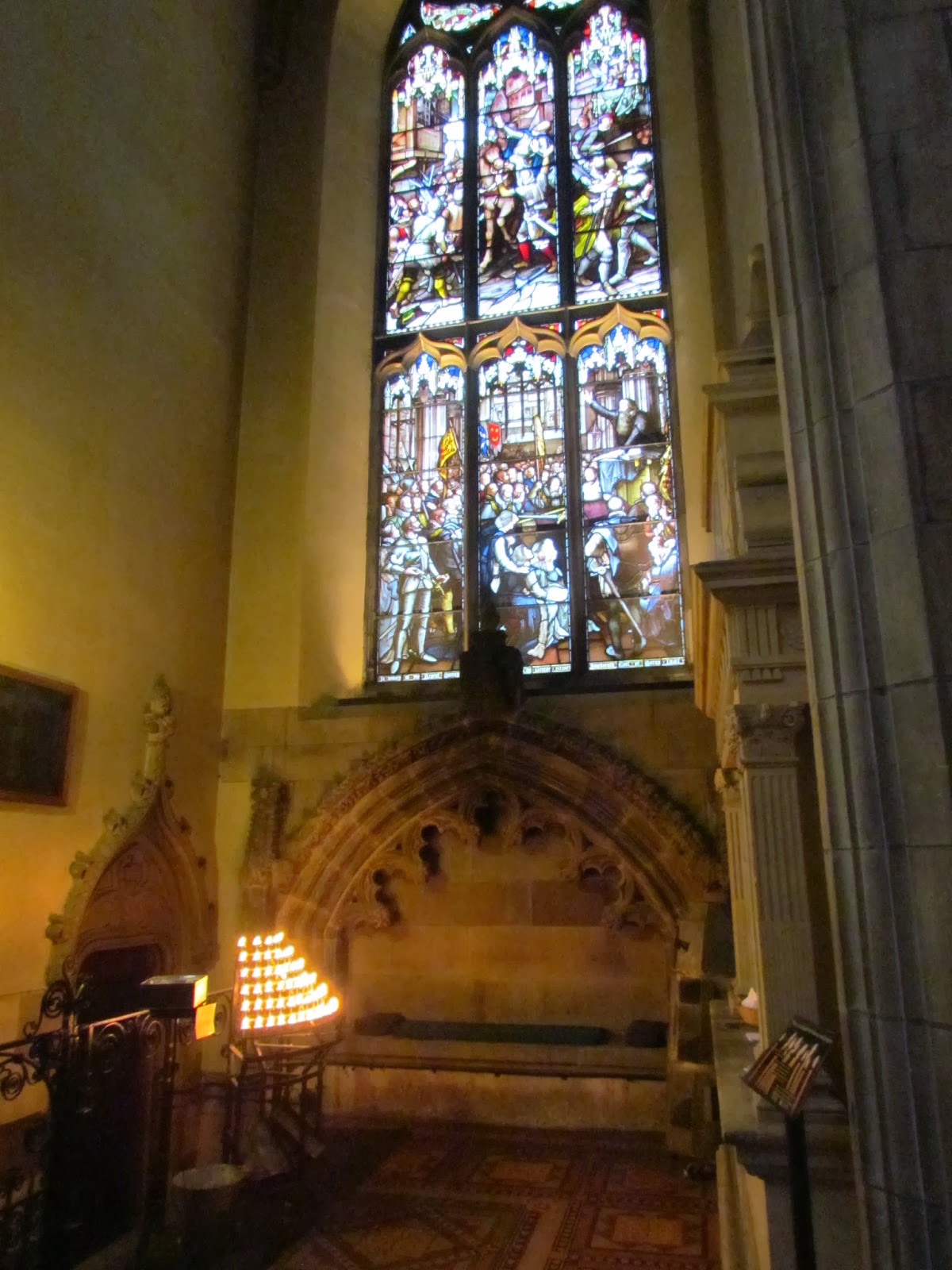 And here also is his friend James Stewart, Earl of Moray Regent of Scotland who was assassinated in 1570.

Here too are those two great 17th century enemies, each commemorated by late 19th century memorials: one (on below left) erected by Clan Graeme to James Graham, the Marquess of Montrose, leader of the Royalist cause, who was executed in 1650, and one (below right) erected at the suggestion of Queen Victoria  to the nemesis of Montrose, Archibald Campbell, the Marquess of Argyll, who supported the covenanting church and was executed in 1661. 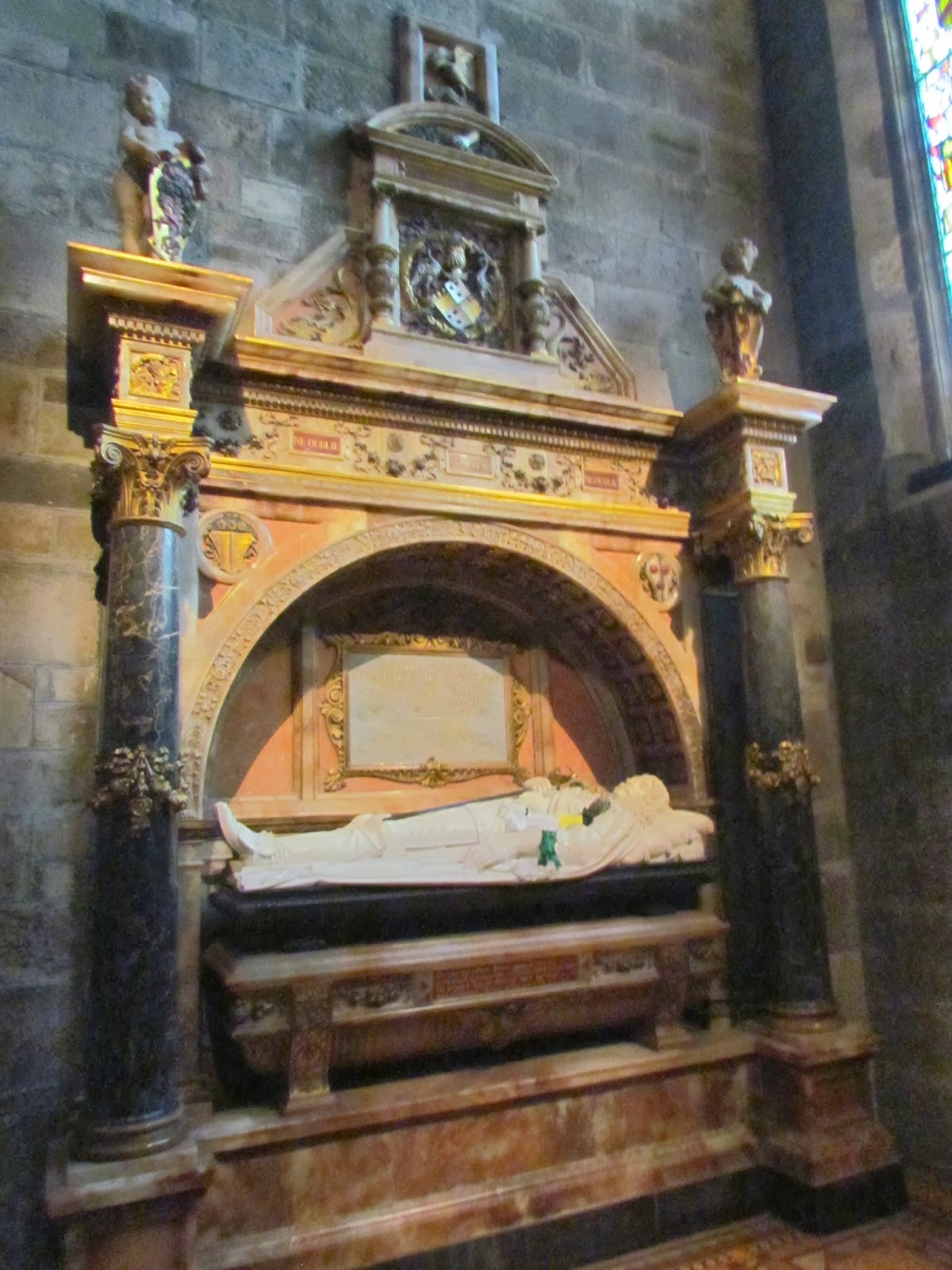 So much, so divisive, and so emblematic of Scotland's great conflicts between religious factions. However, we cannot leave St Giles without a reference to the single female figure for whom St Giles is most commonly remembered: Jenny Geddes. Unsurprisingly, there is no memorial to Jenny, a Luckenbooth wifie, ie a poor stallholder from the market held in the square outside St Giles. In 1637, King Charles I issued a proclamation that all churches in Scotland should use the Book of Common Prayer prepared by the Church of England and promoted by Archbishop Laud. The king had made no attempt to gain the support or agreement of either the Scottish clergy or the Privy Council. The conflict was between the Monarch with his bishops and the People of Scotland. When the Dean of Edinburgh began to read the service from the new prayer book, Jenny and her friends screamed their disapproval. When the bishop tried to calm things down, Jenny threw her stool at him, triggering a wholesale riot against episcopacy, 'papacy' and the monarchy.

The 18th century historian William Maitland concludes his account as follows: 'Thus began those horrible troubles, which ended in the destruction of the King, subversion of the Church and State, and loss of the rights and liberties of the people.'

There may be no official memorial to Jenny Geddes in St Giles Cathedral, however there is a fitting commemoration, a cutty (short) stool, carved by Meriryn Smith (2002).

The plaque by it reads: 'Dedicated to Jenny Geddes 1637 by Scotswomen.' A great memorial to 'thrawnness'.


Leaving the Kirk, the visitor arrives opposite the grand civic building on the other side of the High Street, built in 1760 by John and Robert Adam and originally intended as the Royal Exchange. 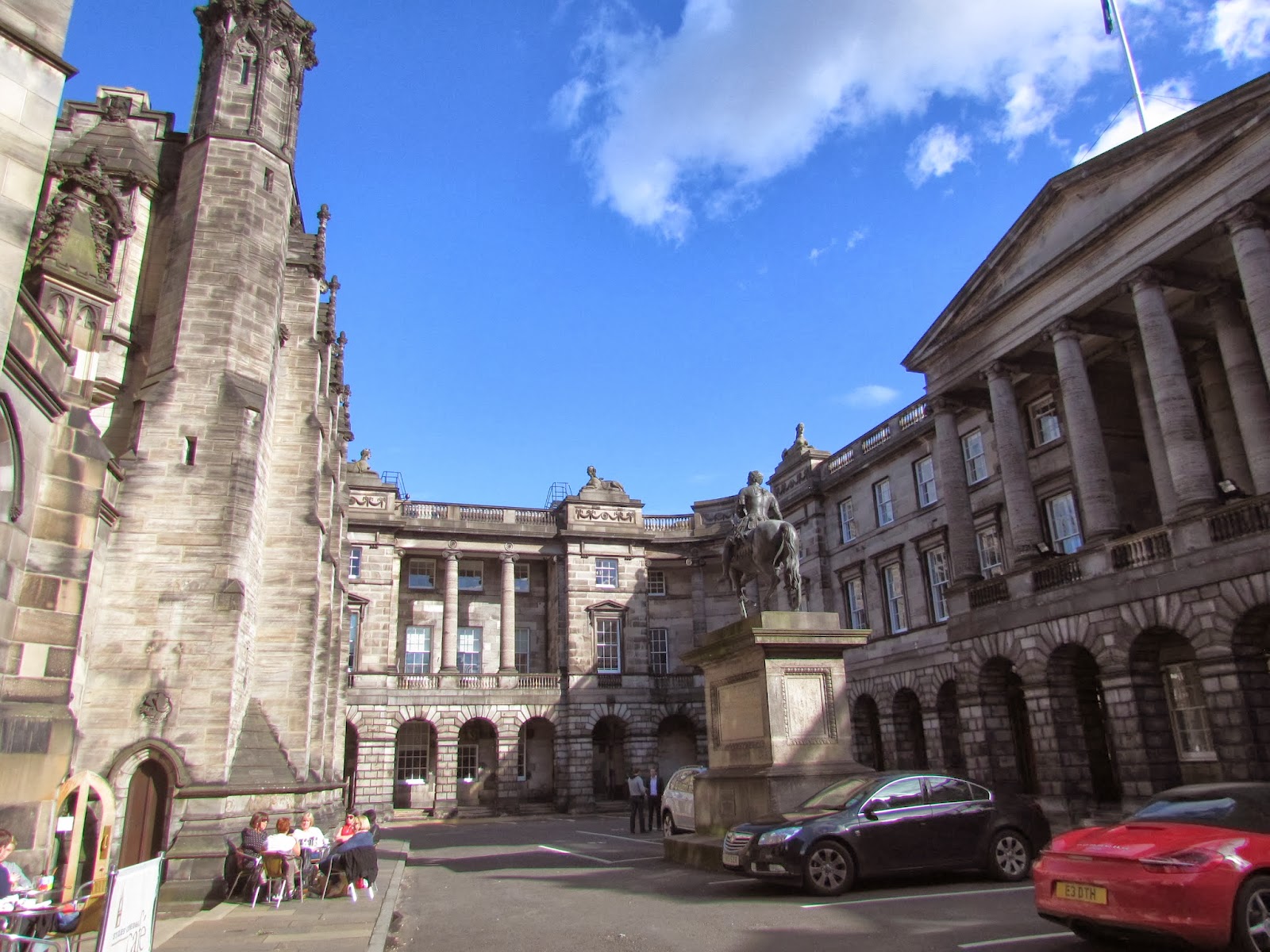 Scots being Scots, however, and not caring to be told what to do, the merchants apparently continued to carry out their business at the Mercat Cross, where we started this post. The impressive building above was then bought by Edinburgh City Council, who use it still: a great building in which the people of Edinburgh exercise their power, with not a prince or prelate in sight.


You may also be interested in these other posts about Edinburgh's Old Town:

At the foot of the Royal Mile: Abbeyhill, Holyrood and the Canongate

Exploring the secrets of the Royal Mile


Posted by Elisabeth Ritchie at 22:33