A day out from Edinburgh: St Andrews

It was December when we last visited St Andrews. Why, you may ask, has it taken me till late May to upload the photographs? Indeed, many events have intervened, not least a lengthy trip to Malawi. So, here at long last is an account of our visit. Just keep in mind that the photographs were taken in the dim light of one of the shortest days in the year. What looks like evening is, in fact, early afternoon!
S Andrews is a favourite day out, not least because Stuart can salivate over the golf course(s). You reach the town by means of a pleasant drive of an hour and a half across the rolling farmland of the Kingdom of Fife. Golf, however, despite its importance, does not entirely define St Andrews. After all, the Royal and Ancient, which oversees the conduct of golf across the world (except in the USA!) has only been there since 1754. Christianity, however, was founded something like thirteen hundred years ago, making church-going a rather more established tradition than sport. The University, for which the town is also famous - and not just because the Duke and Duchess of Cambridge went there - is the oldest in Scotland, having been established in 1410.
St Andrews is a surprisingly small town. You can walk from one end to the other of the centre in roughly half an hour, and that's at a tourist's sauntering pace. During term time, a third of the people you pass in the street will be students. St Andrews has largely retained its old tow architecture. Where ancient buildings cosy up to more modern neighbours, the latter tend to be nineteenth rather than twentieth century, thank goodness. 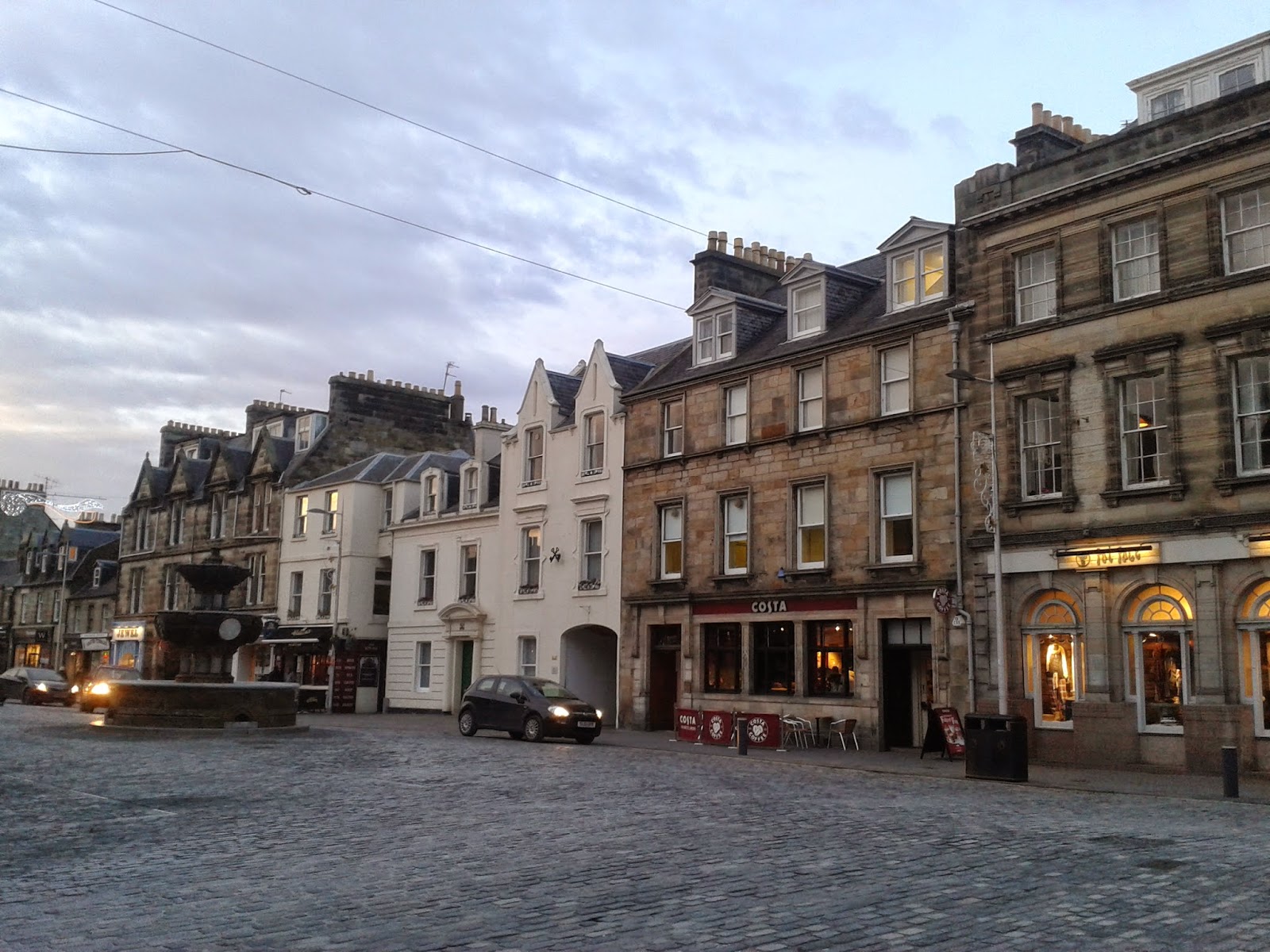 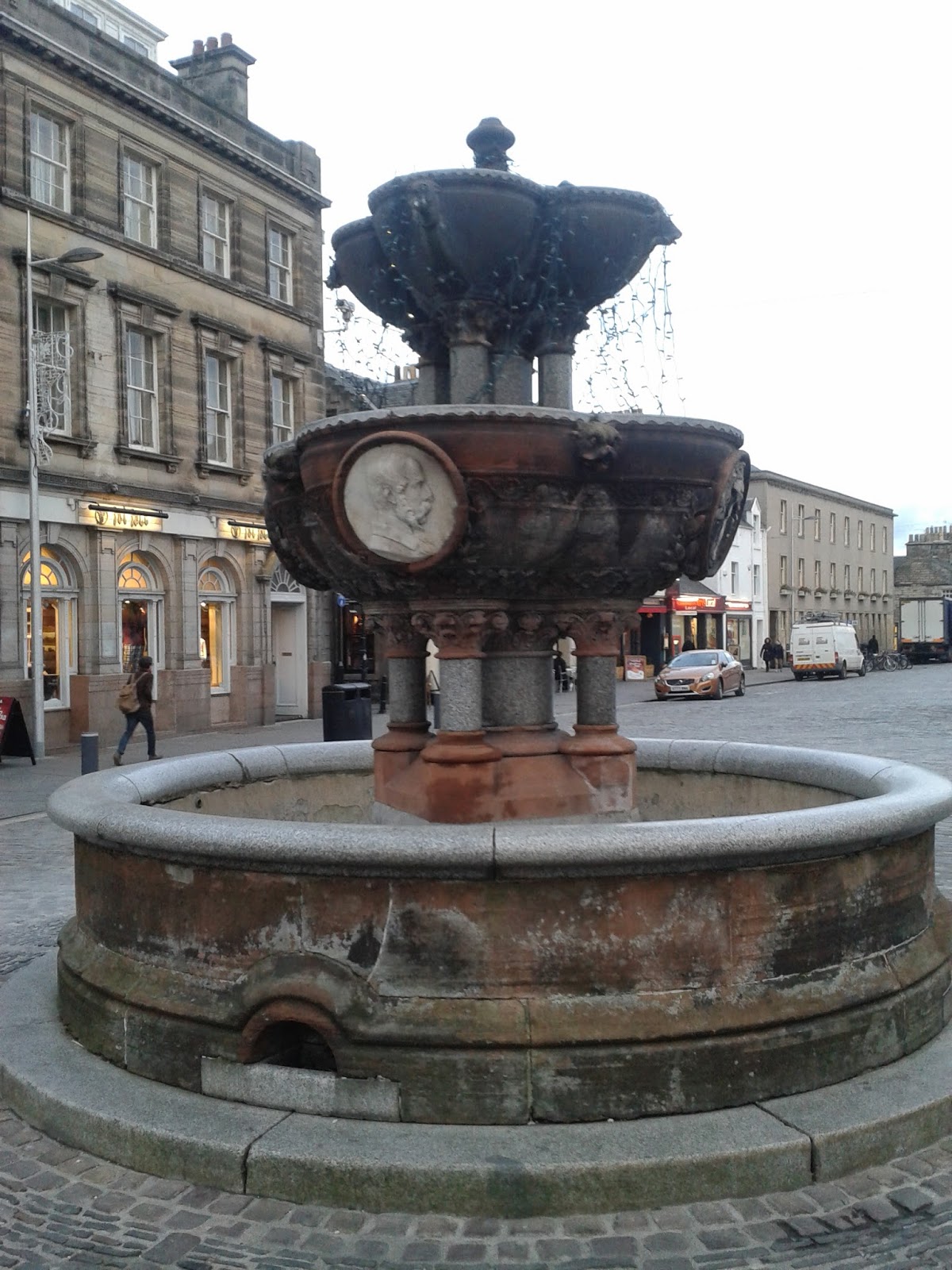 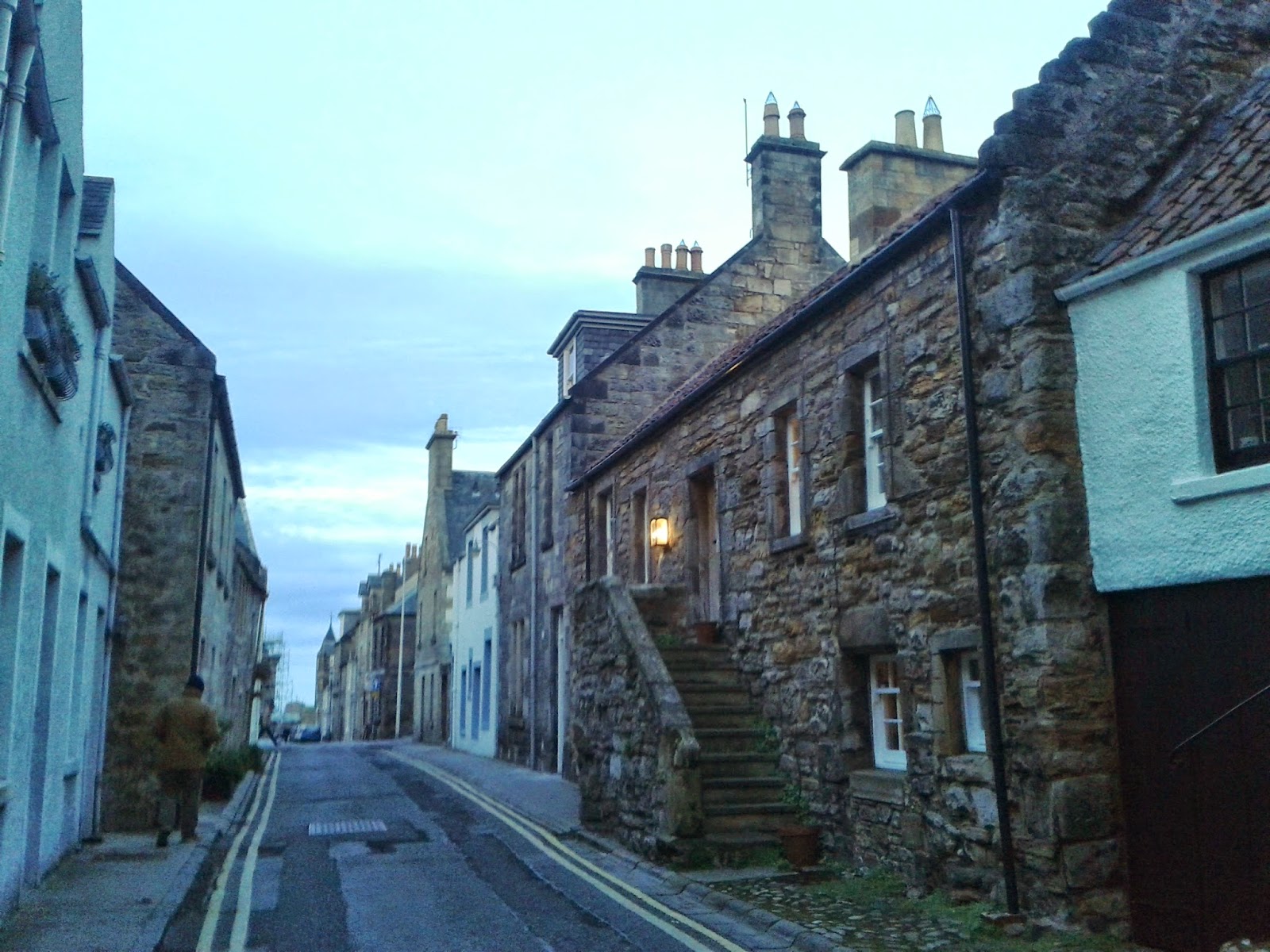 The town is also attractively residential, with old tenements and ancient cottages lining the side streets.

St Andrews was a very busy place in mediaeval times, with pilgrims coming from all over Europe to pray at the shrine of St Andrew, whose bones were considered to have miraculous qualities. The twelfth century cathedral, once the most important in Scotland, lies to the east of the town next to the abbey, both ruined following violent destruction during the Reformation. The cathedral is no longer the seat of any bishop. 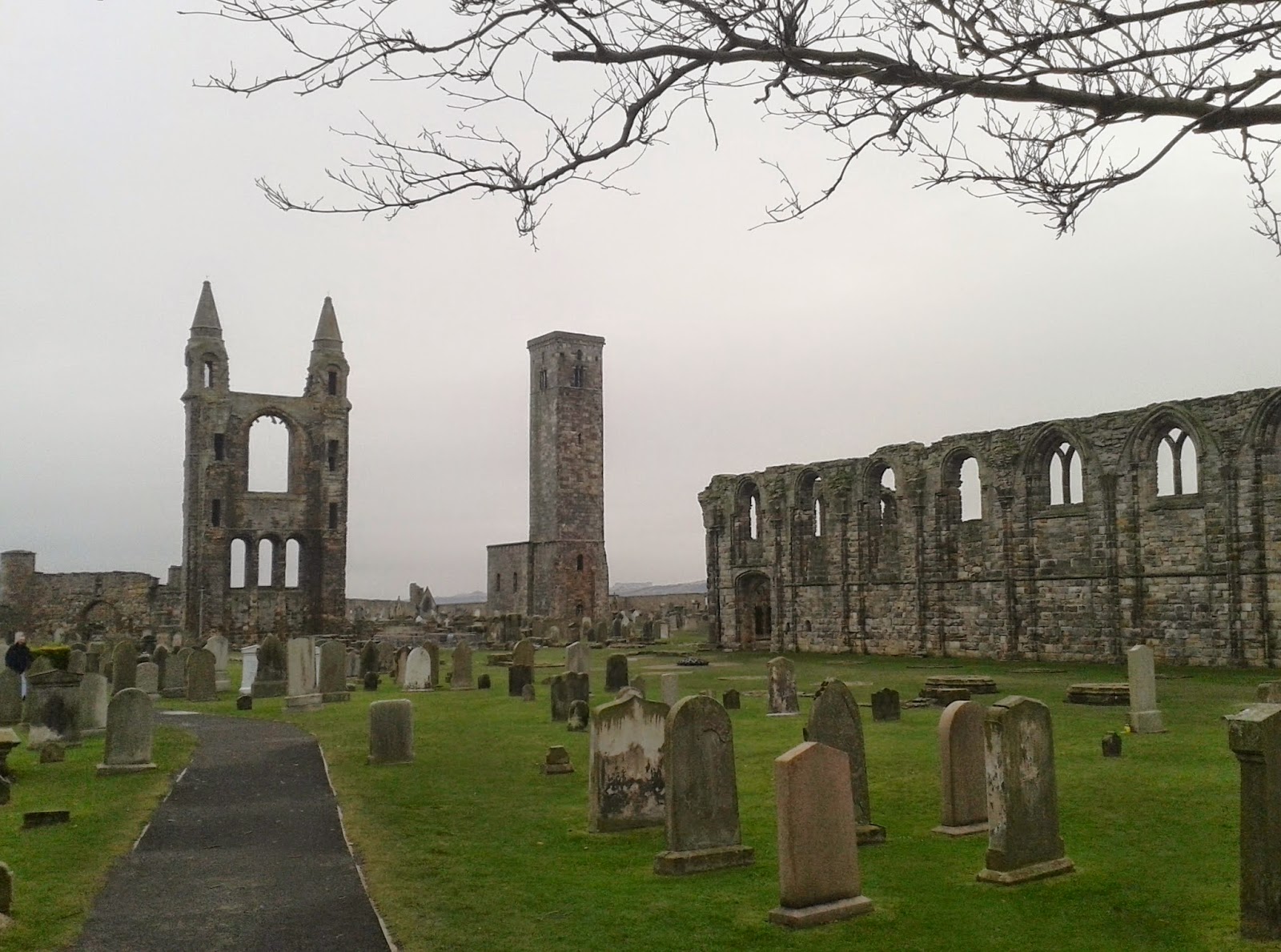 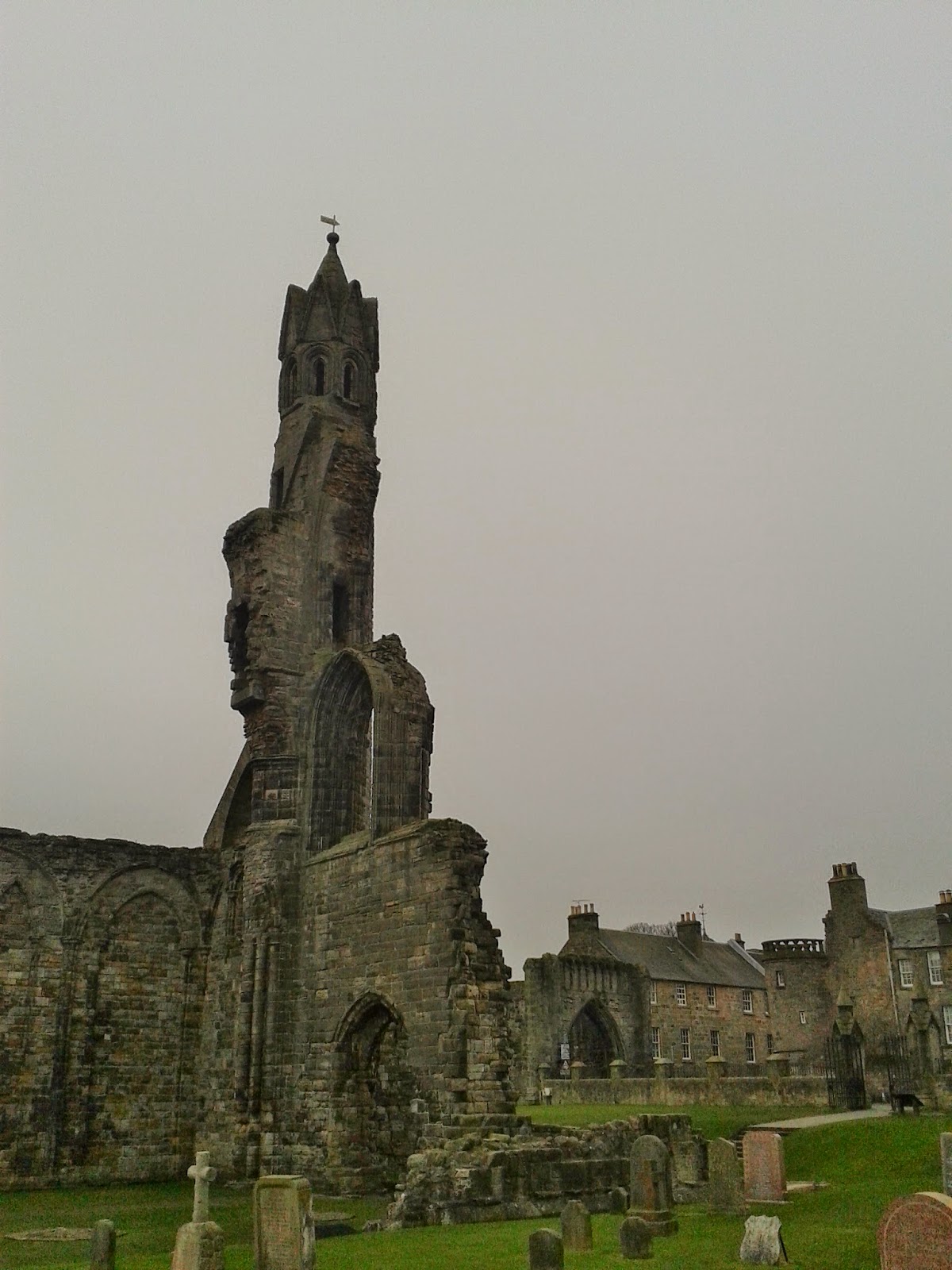 Just round the corner from the cathedral, is one of the surviving gates (ports) into the town, both still in use. 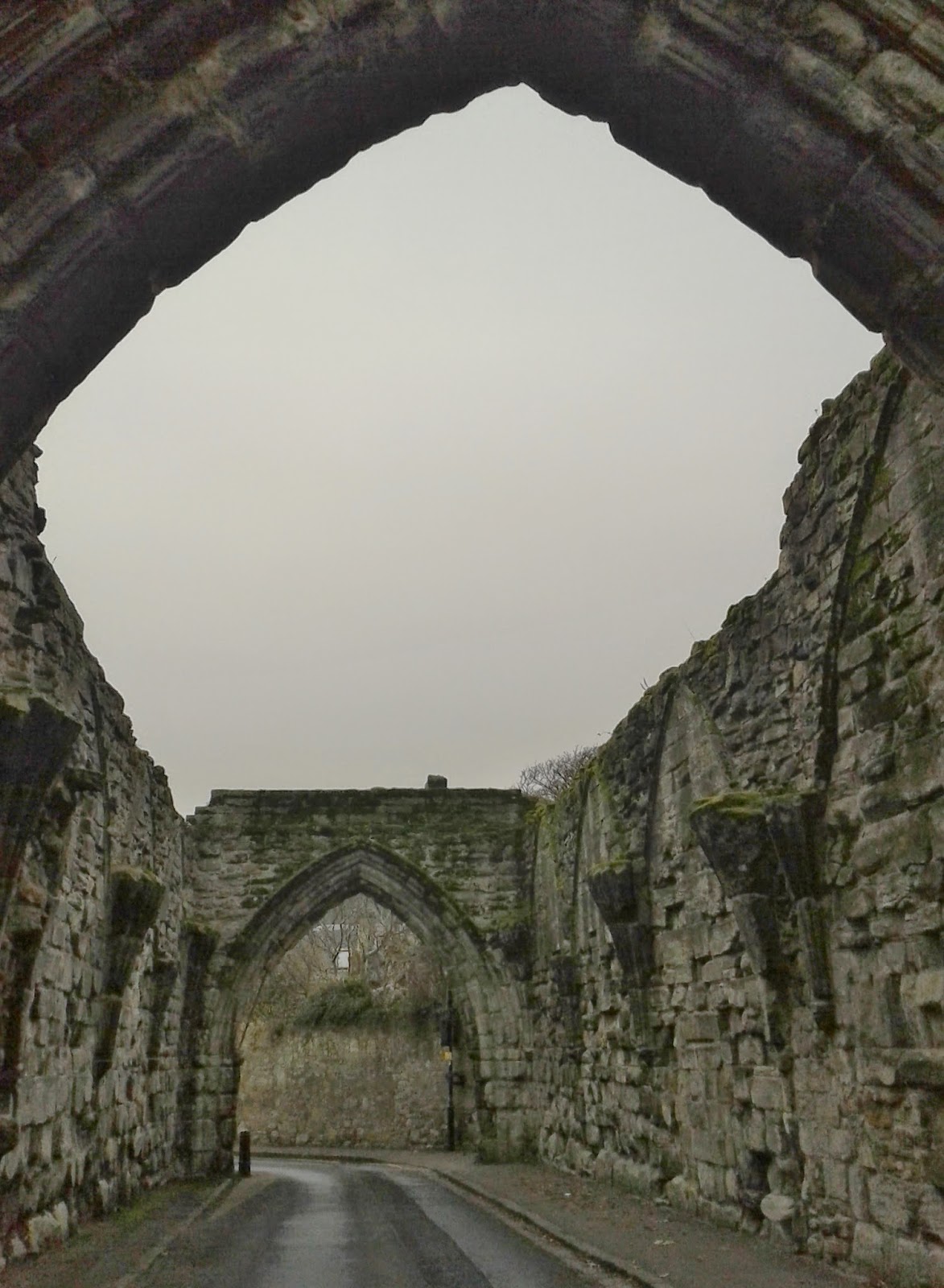 The other old archway - West Port - is at the far end of the town. 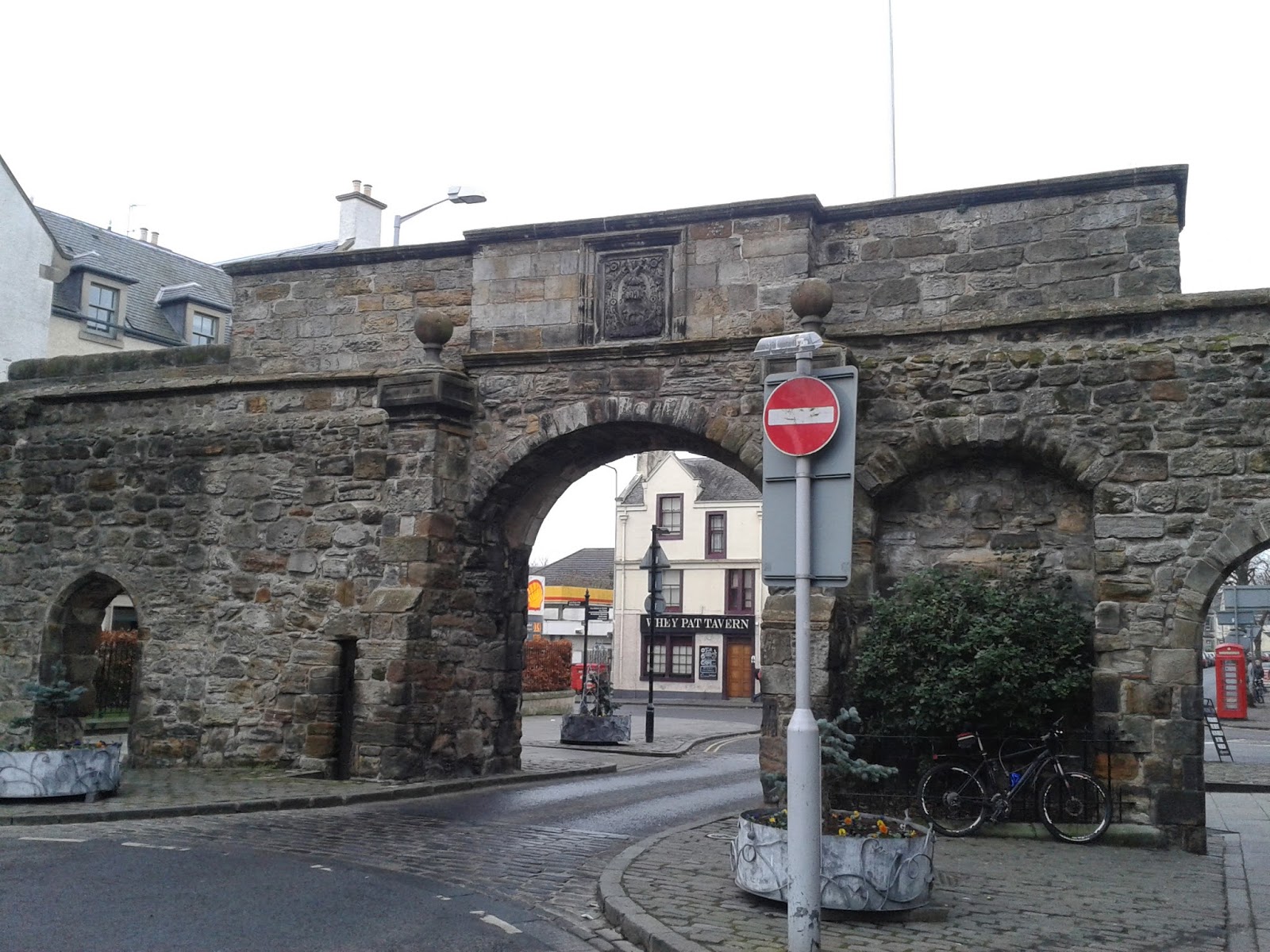 Many of the oldest buildings in the town have religious associations. You can see the ruins of another religious establishment on South Street in the town centre: the apse of the church belonging to the friary of the Dominicans, Blackfriars. Behind it is the old building of Madras College, founded in 1833 by an educational pioneer, Dr Andrew Bell, who introduced the system of older pupils teaching younger children. It was a system he had come across in Madras, where he used to work. It was a relatively cheap system to run, which enabled poor children to enrol and learn alongside their more fortunate peers. The school gained a national education, attracting pupils from all over Britain who used to lodge in the town, a common approach to boarding in those days and one which persisted in Scotland until relatively recently. 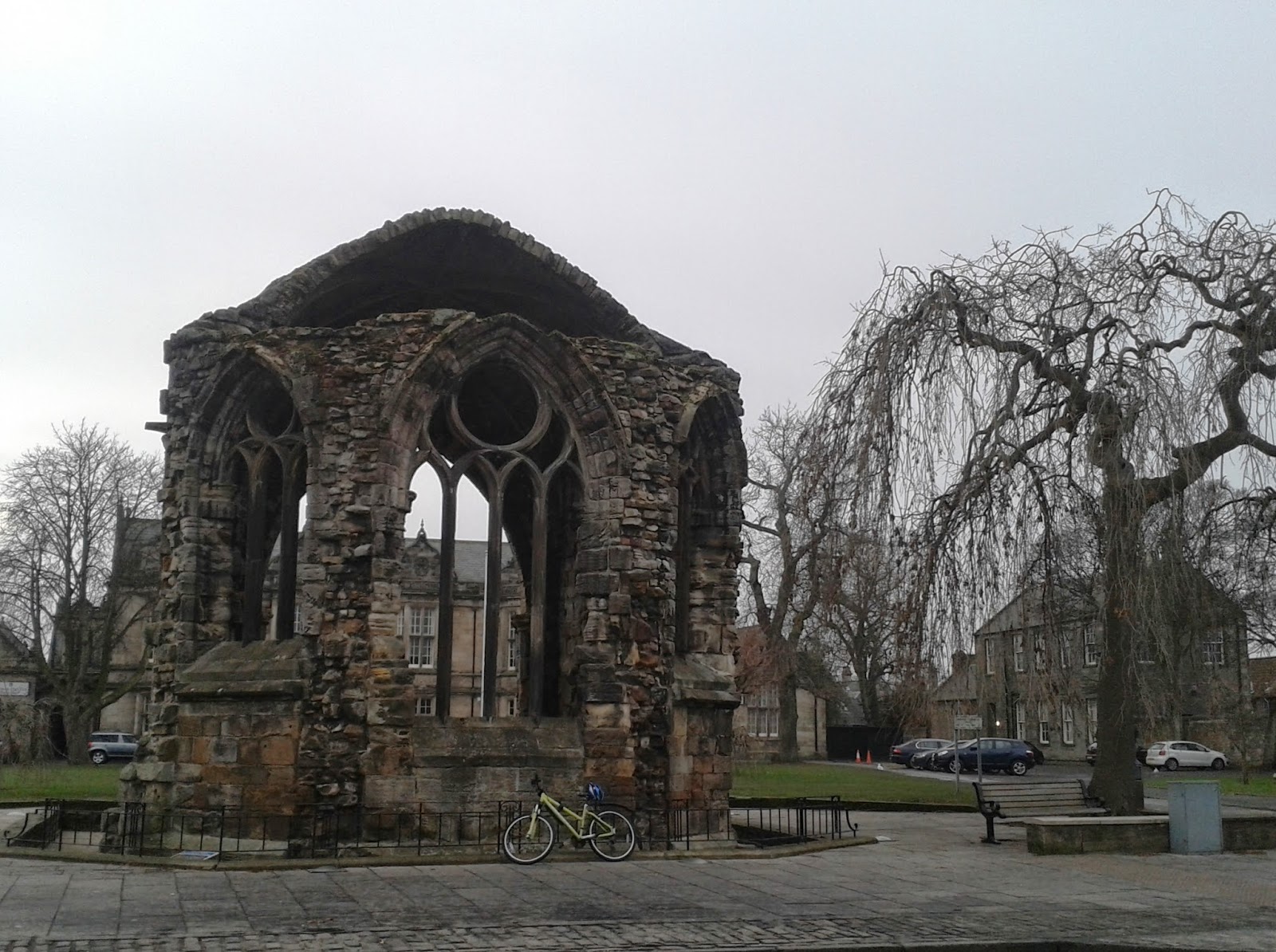 Not far from the cathedral, hanging on to the cliffs to the west of it is the castle, once the bishop's palace and the prison for his enemies. 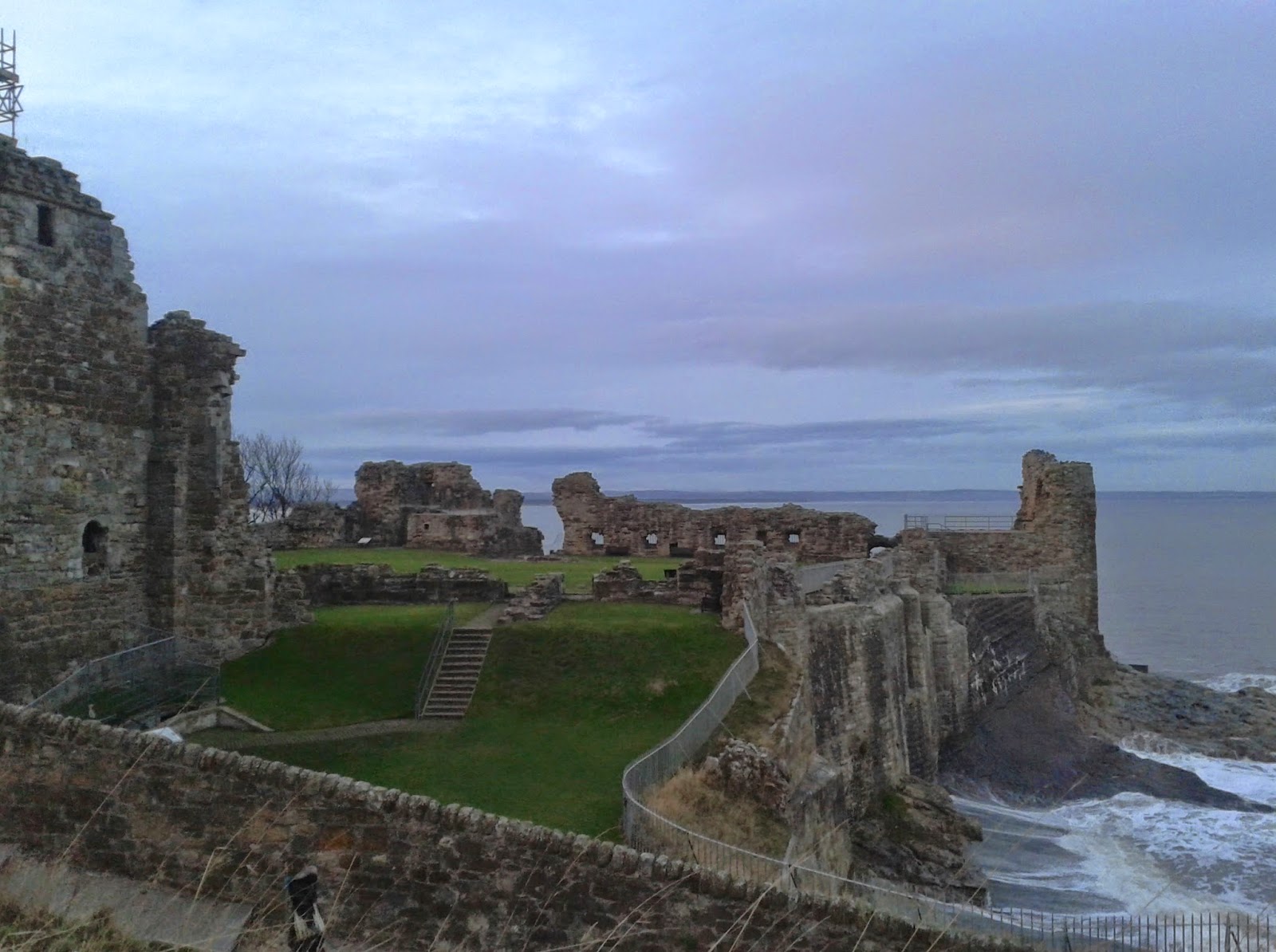 The castle was besieged, stormed and badly damaged during the Rough Wooing, when Henry VIII of England sent his army into Scotland following the Scottish Parliament's rejection of the marriage proposed by the Treaty of Greenwich between his son Edward (later Edward VI) and the infant Mary, Queen of Scots. Such an alliance raised the prospect of a union between the two countries, not a universally popular idea. Civil War ensued which lasted from 1543 until 1550 with one faction in Scotland preferring an alliance with Catholic France. In 1544, Holyroodhouse, the Royal residence, and its Abbey were burnt, the city of Edinburgh looted and villages across East Lothian and the Borders sacked and destroyed. Some influential Protestant Scots, however, suspicious of the French ad their Catholicism, sided with the English.

In 1546, following 18 months of peace, George Wishart, a radical Protestant preacher, was imprisoned in the sea tower by the Archbishop of St Andrews, Cardinal Beaton  and then burnt at the stake. Wishart's supporters, a group of Protestant nobles, attacked the castle in retaliation, killed the Cardinal and hung his body from the battlements. The castle was rebuilt after the conflict was over, but fell into disrepair during the years after the Reformation, when it was no longer the seat of the bishop.

However, religious conflict and martyrdom had begun long before the Rough Wooing. Following the line of the cliffs to the west of the castle and walking through a street of attractive university buildings,  you see ahead of you a tall monument. 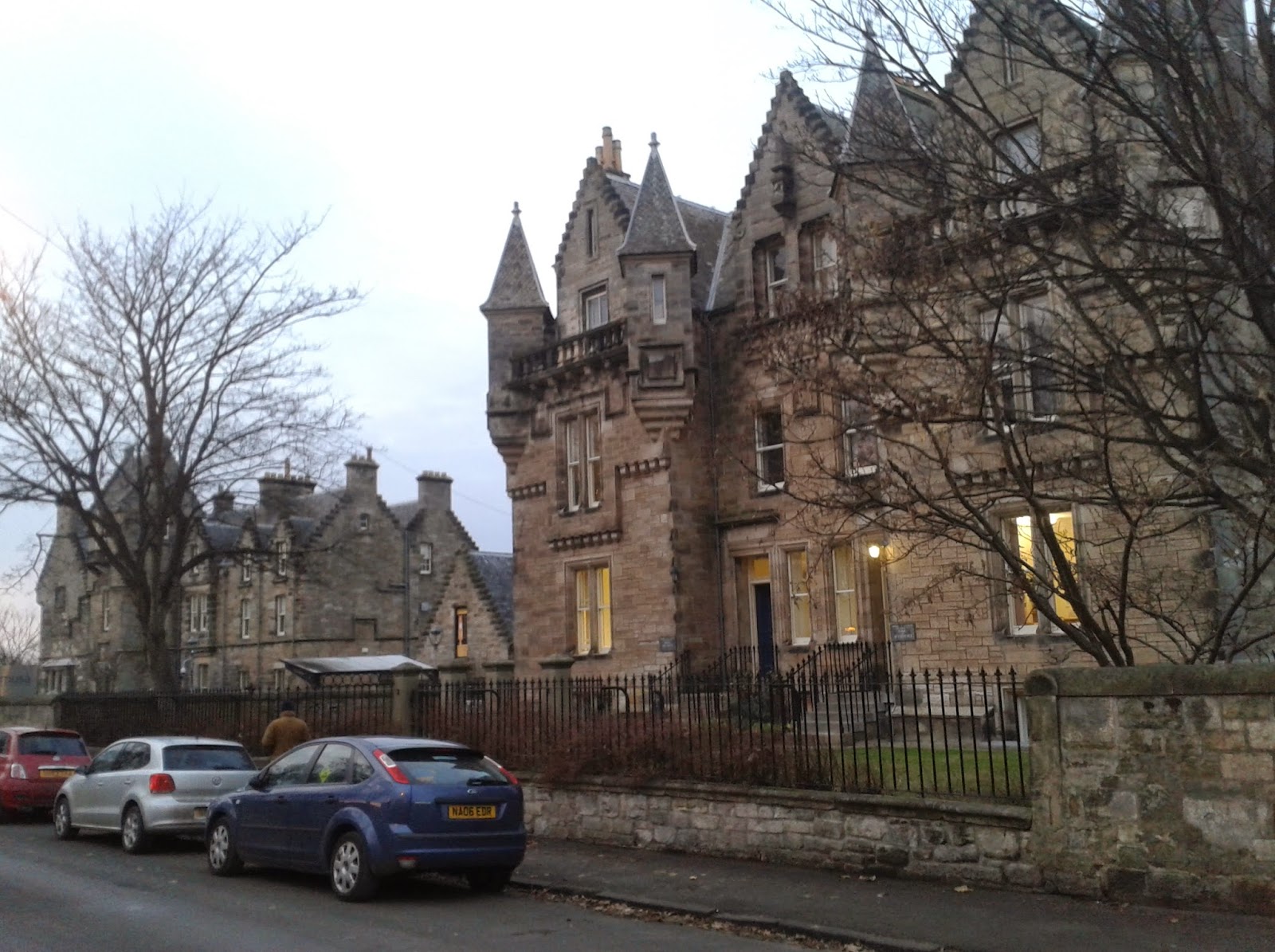 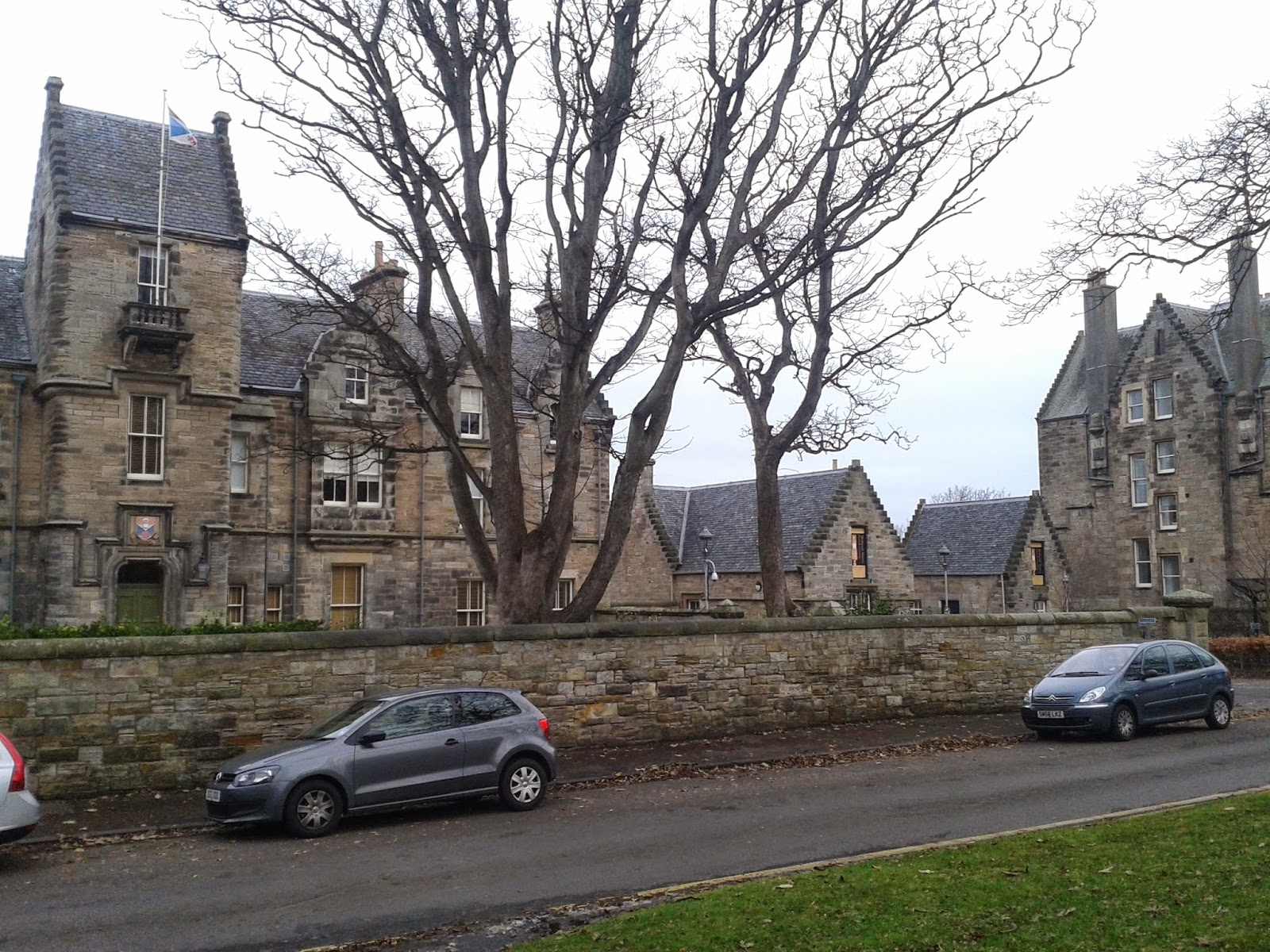 The column is located where the street opens onto a wide open space, called the Scores, looking over the sea. 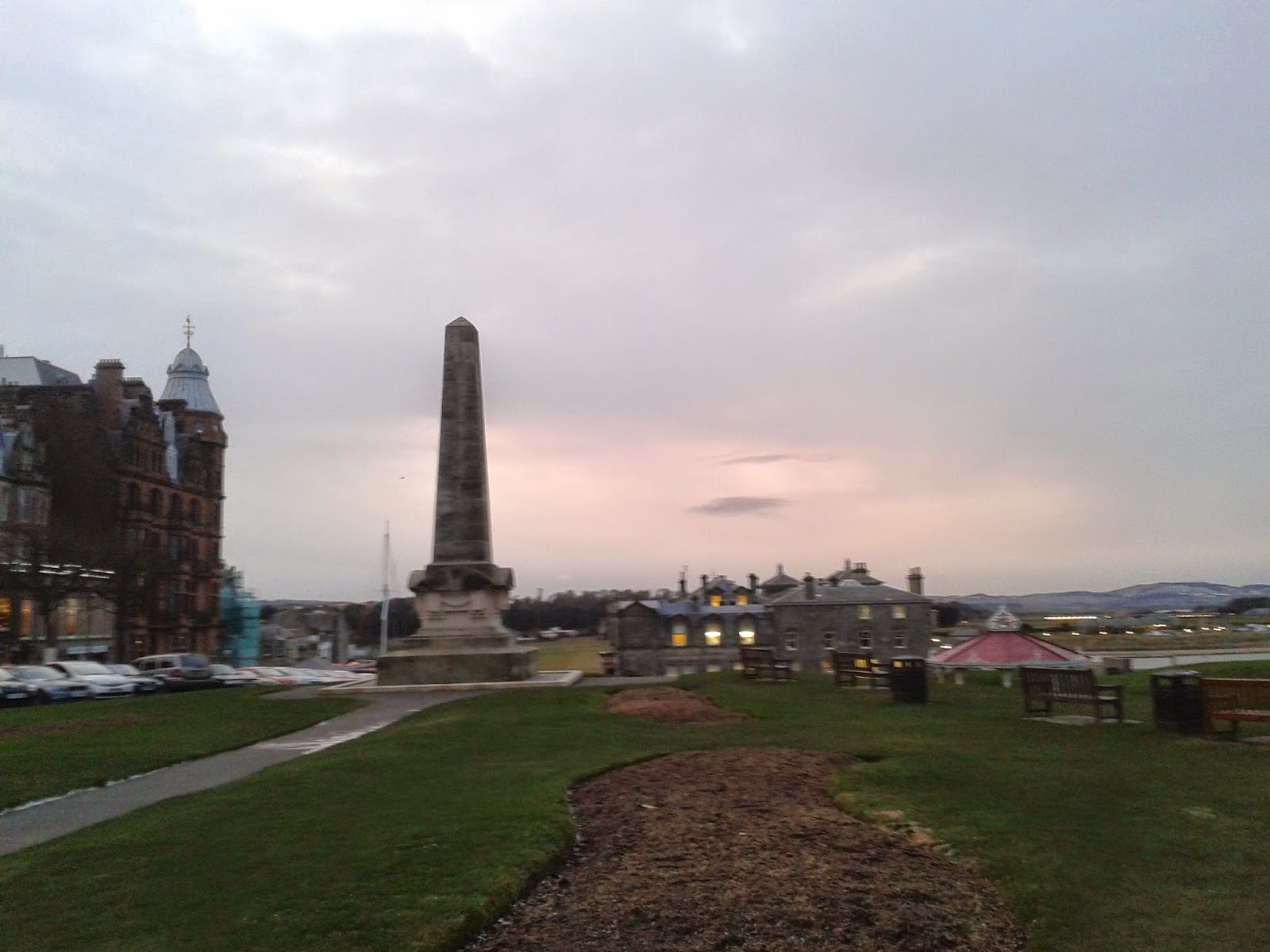 The monument commemorates the deaths of four Protestant martyrs: George Wishart (above) in 1546, Patrick Hamilton, Henry Forrest and Walter Mill. Hamilton was burnt in 1528 for preaching the new Lutheran ideas. Forrest was killed in 1533 for supporting Hamilton and owning a copy of the New Testament in English. In 1558, Mill, or Miln, was burned to death at the age of 82 for supporting Protestant beliefs and practices, including the marriage of priests and preaching in private.

The cliffs here are quite high and if you look to the right you can see where women accused of being witches used to be thrown down to test the accuracy of the theory. If they survived, they were guilty and carted off to be burnt at the stake. Those who died from the fall were, ironically, innocent. 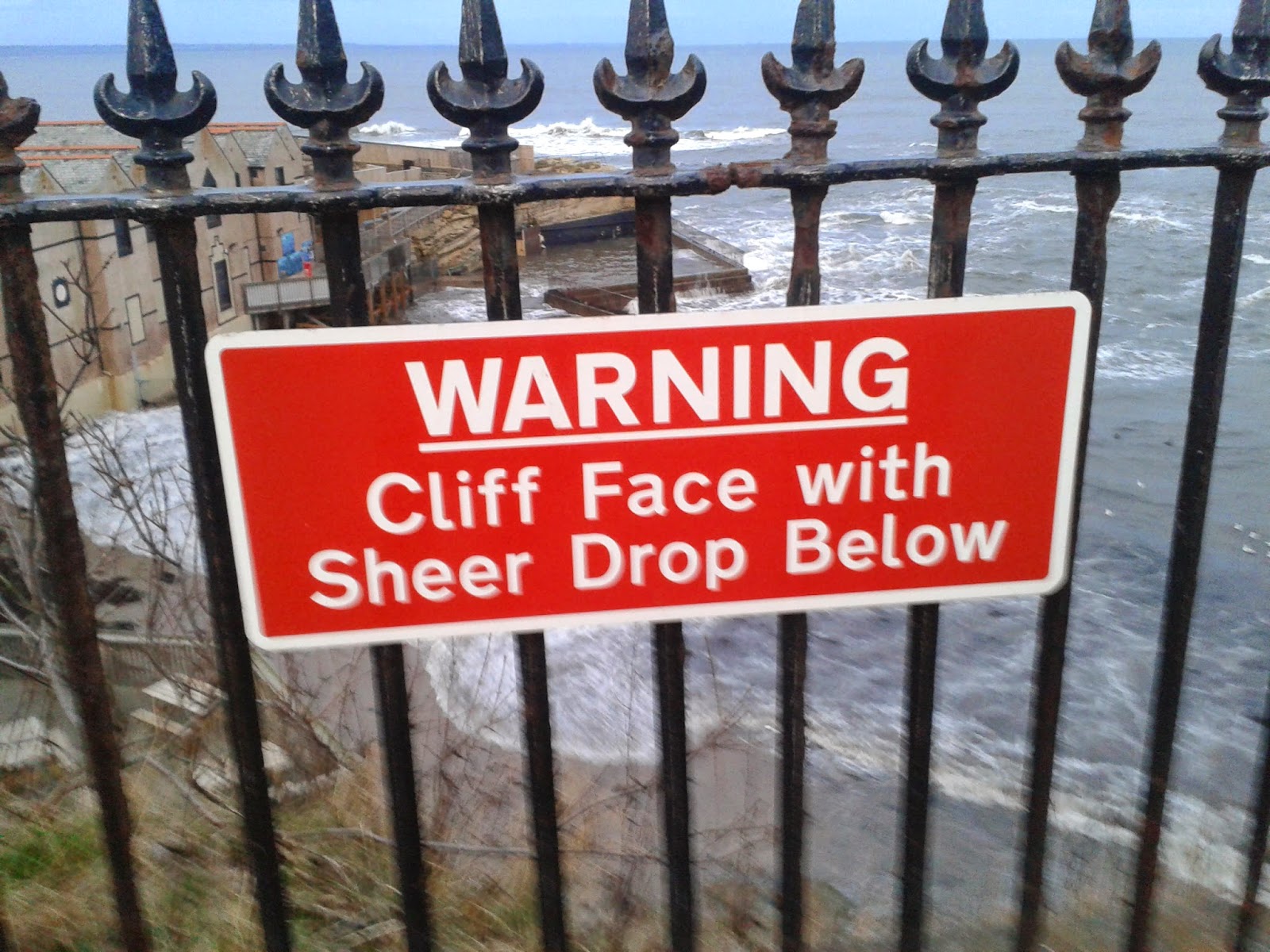 From near this spot, you may also be able to make out the remains of the old open-air sea-water swimming pool. The tide was out when we were there, so you can see it quite clearly, next to the harbour area and aquarium. 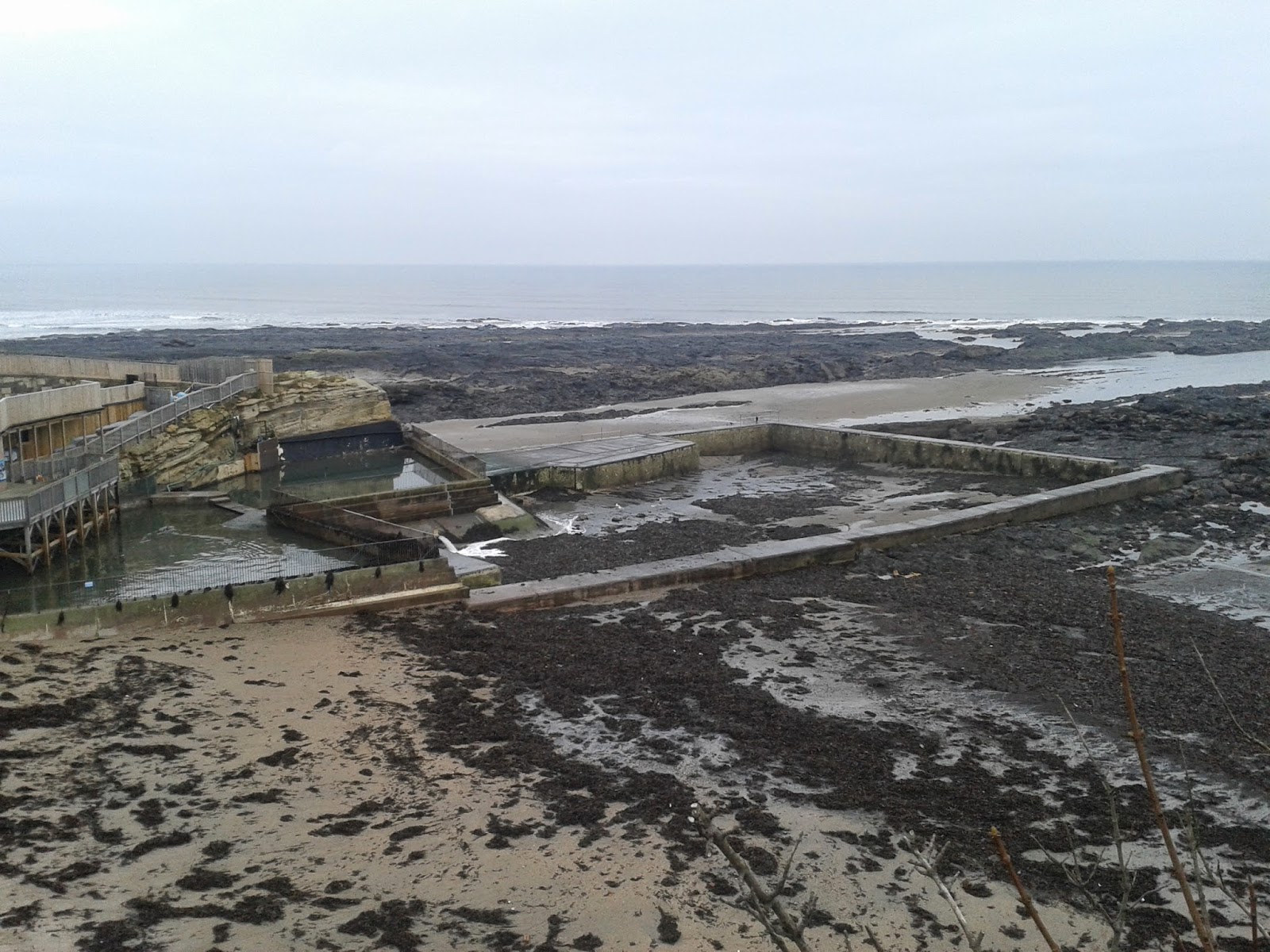 If you look back the way you have come you get a good view of the terraces overlooking the sea and the town beyond. 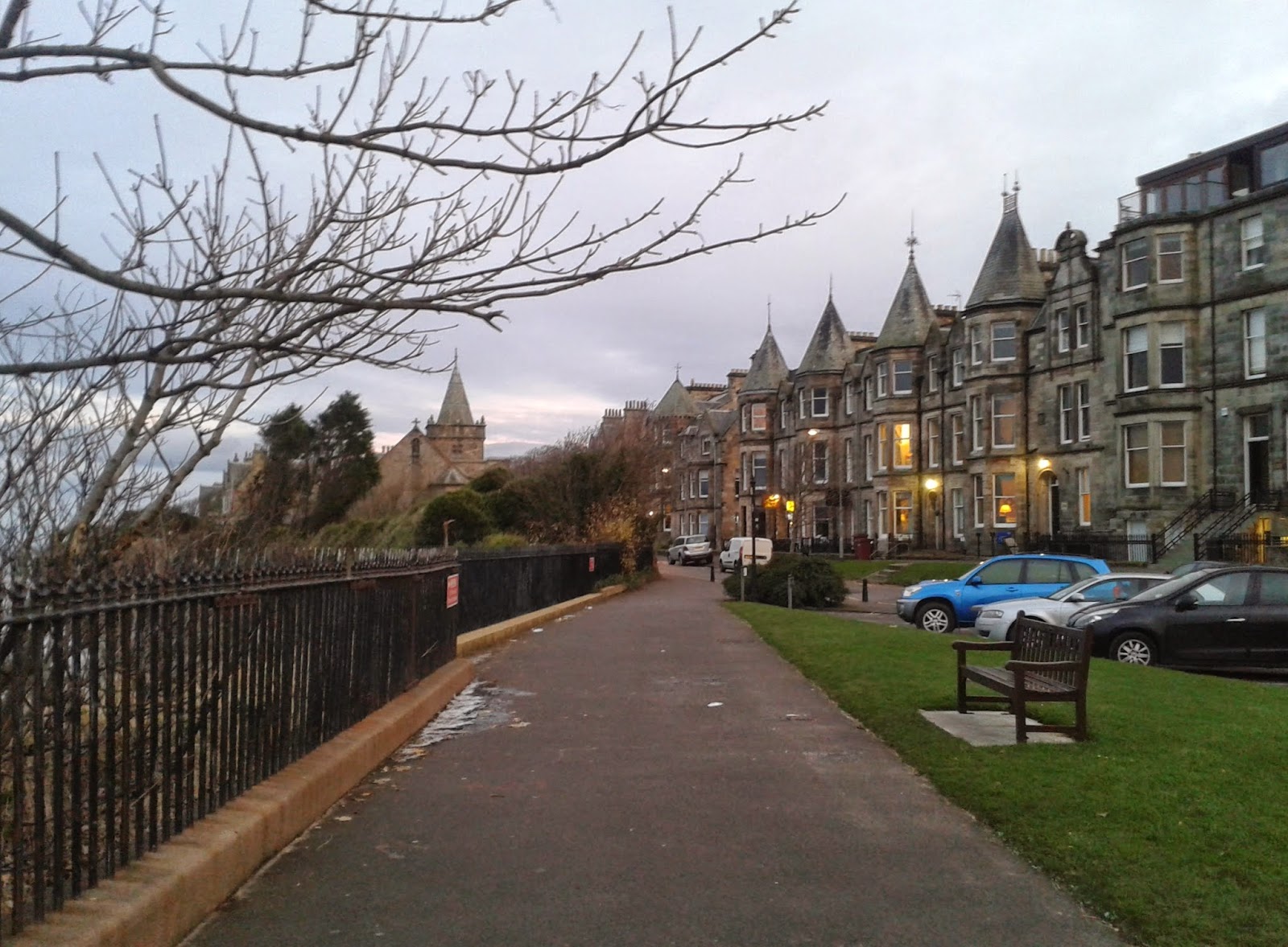 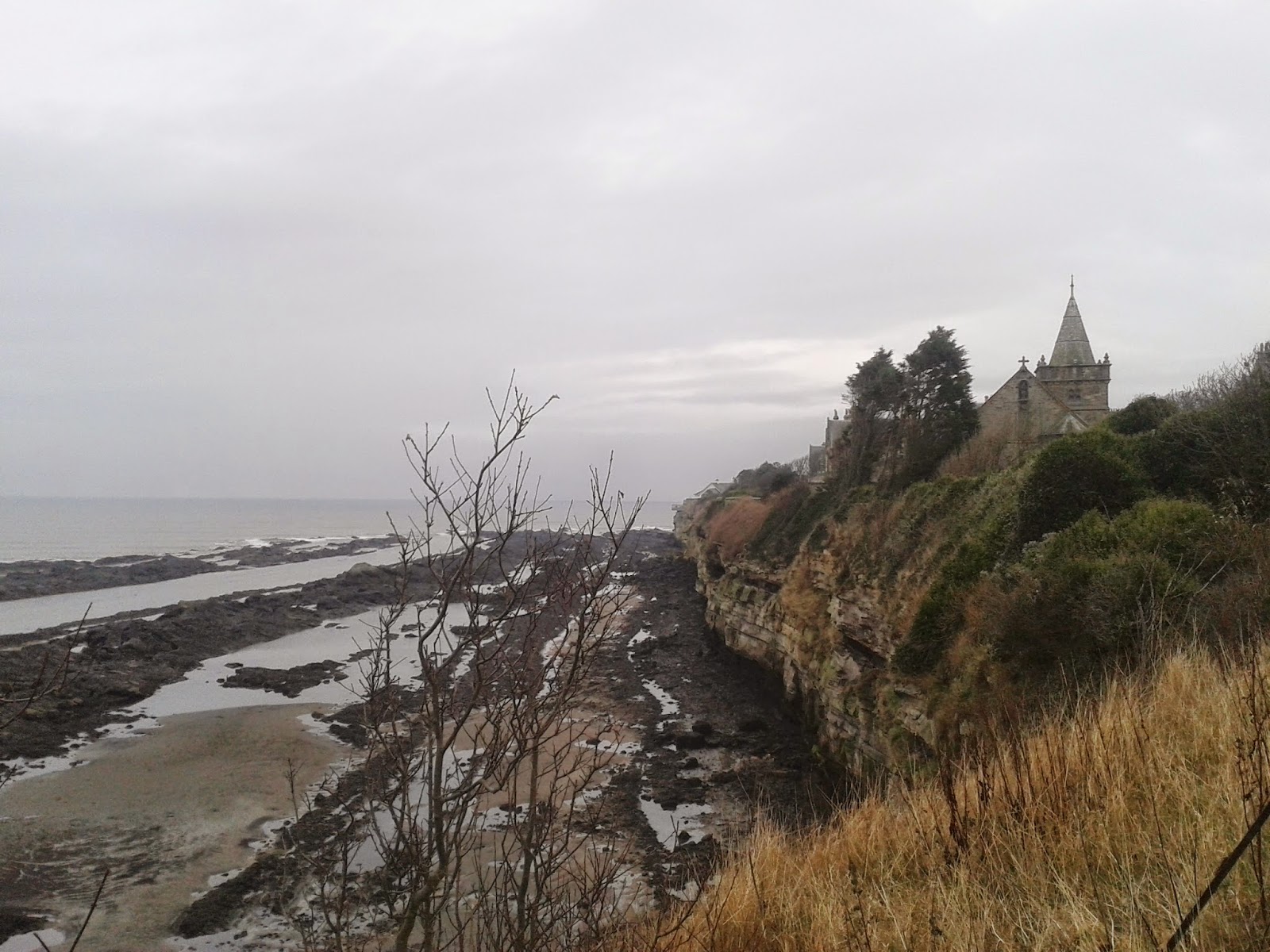 Looking to the west, you can see the West Sands, where scenes from Chariot of Fire were filmed, apparently. More important are the Links. Here is the most famous of St Andrews' seven golf courses, the Old Course, where the Open Championship was first played in 1873. 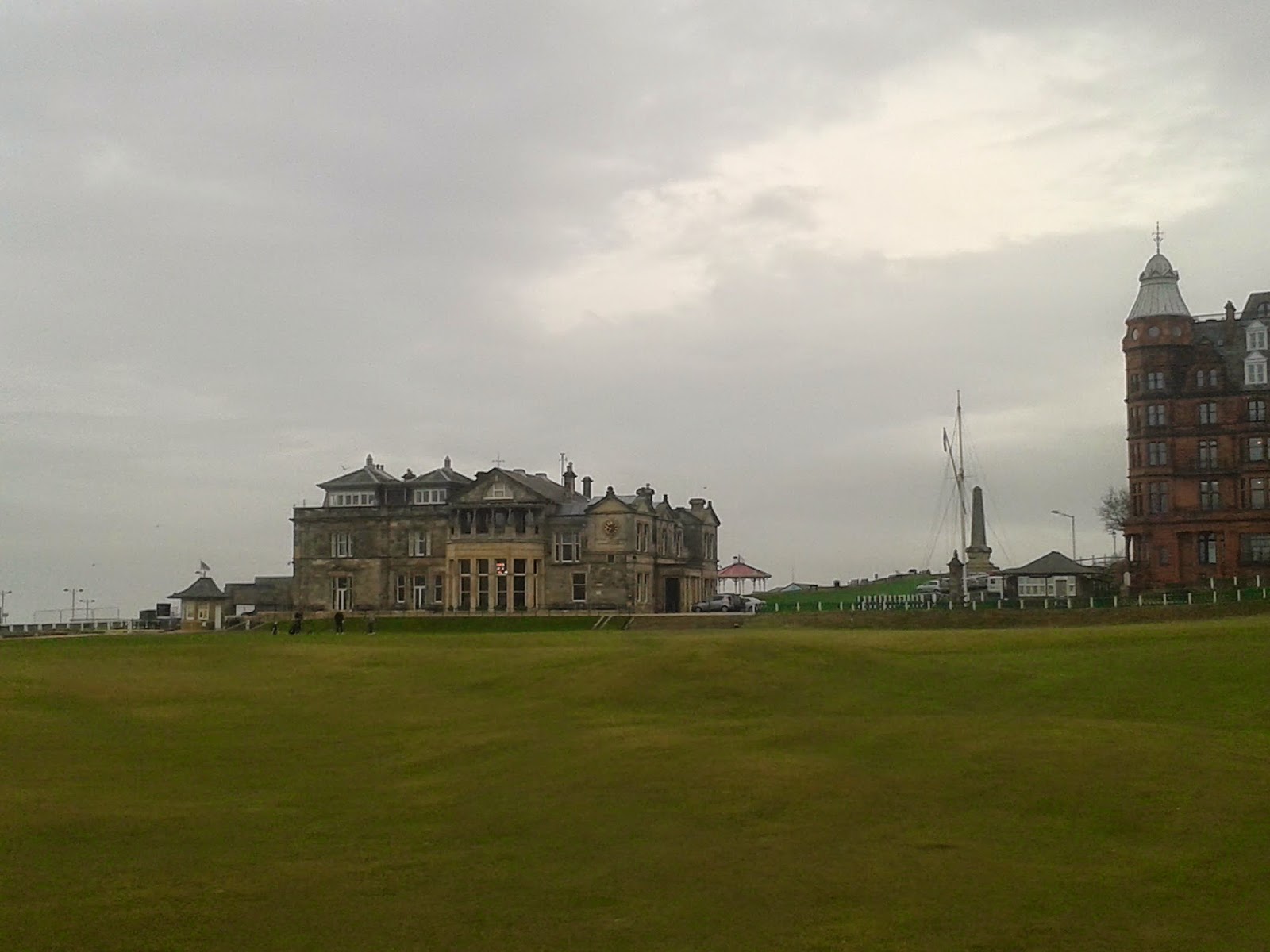 Returning through the town, along South Street, you will come across the The Parish Church of the Holy Trinity, originally built in the twelfth century but restored since then. It was here that John Knox, who was educated at St Andrews University, preached his first public sermon in 1547. Knox had acted as bodyguard for George Wishart (above) but was persuaded to return home by Wishart on the latter's arrest. In 1559, a particularly provocative sermon on the key Protestant principles resulted in the sacking of the cathedral. A year later, Scotland became officially Protestant. 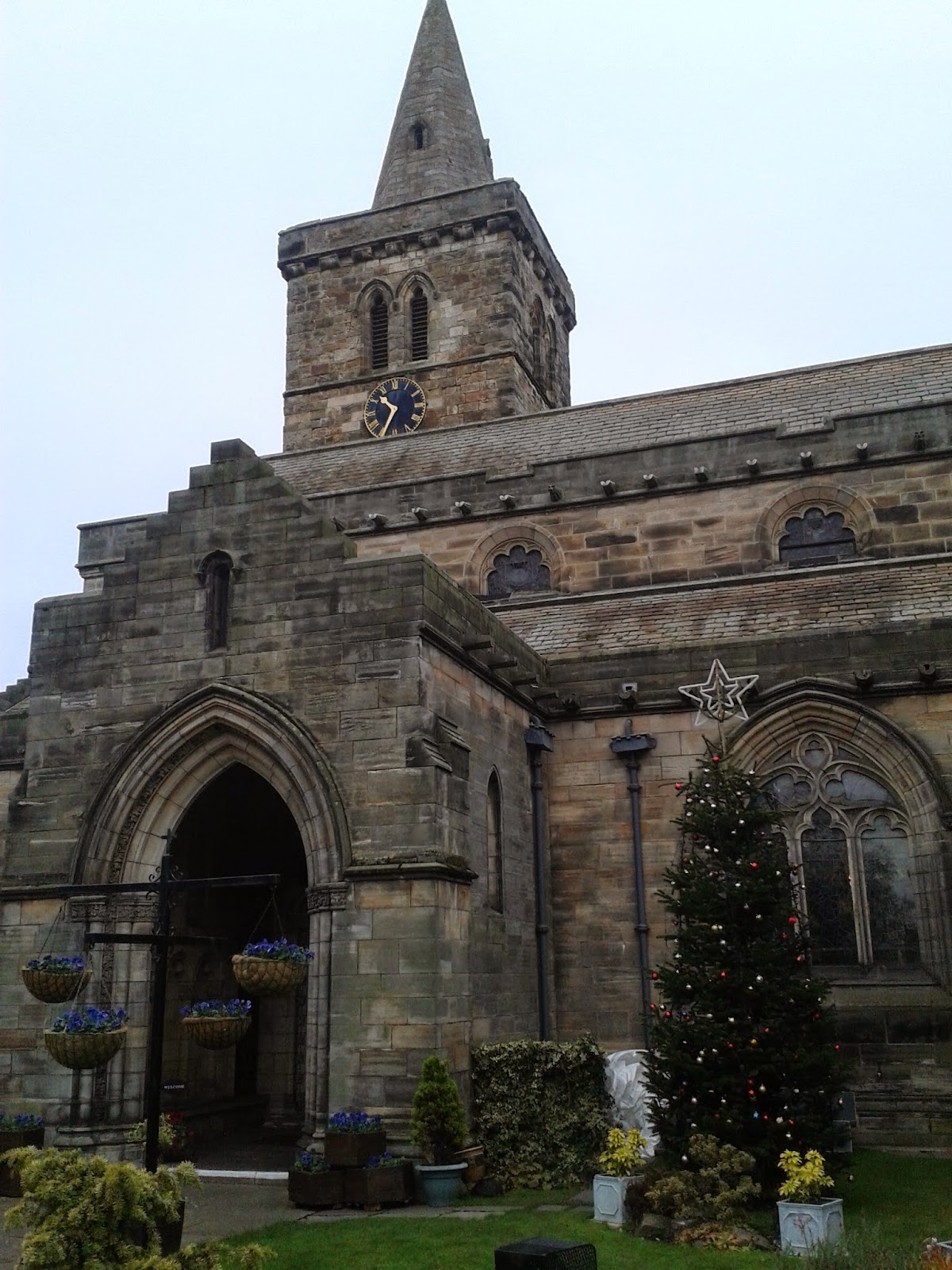 We will leave our brief tour of St Andrews here. We have skimmed over the golf and more or less ignored the ancient university. However, I find the St Andrews' role in the history of Scotland during the sixteenth century fascinating, though I have only touched on one or two key events in this post. We will return on a summer day in the sunshine next time!

Posted by Elisabeth Ritchie at 11:30