The last stretch: a walk by the Water of Leith, from Stockbridge to the sea

I have just re-read my earlier post, Mills, millionaires and monstrosities: a walk by the Water of Leith from Roseburn to Stockbridge, in preparation for embarking on this one, about the lower reaches of the river as it flows towards the Firth of Forth. How the river banks change as they approach the port of Leith! At Stockbridge we leave behind the stately Georgian buildings and solid Victorian urban architecture described in my earlier post. 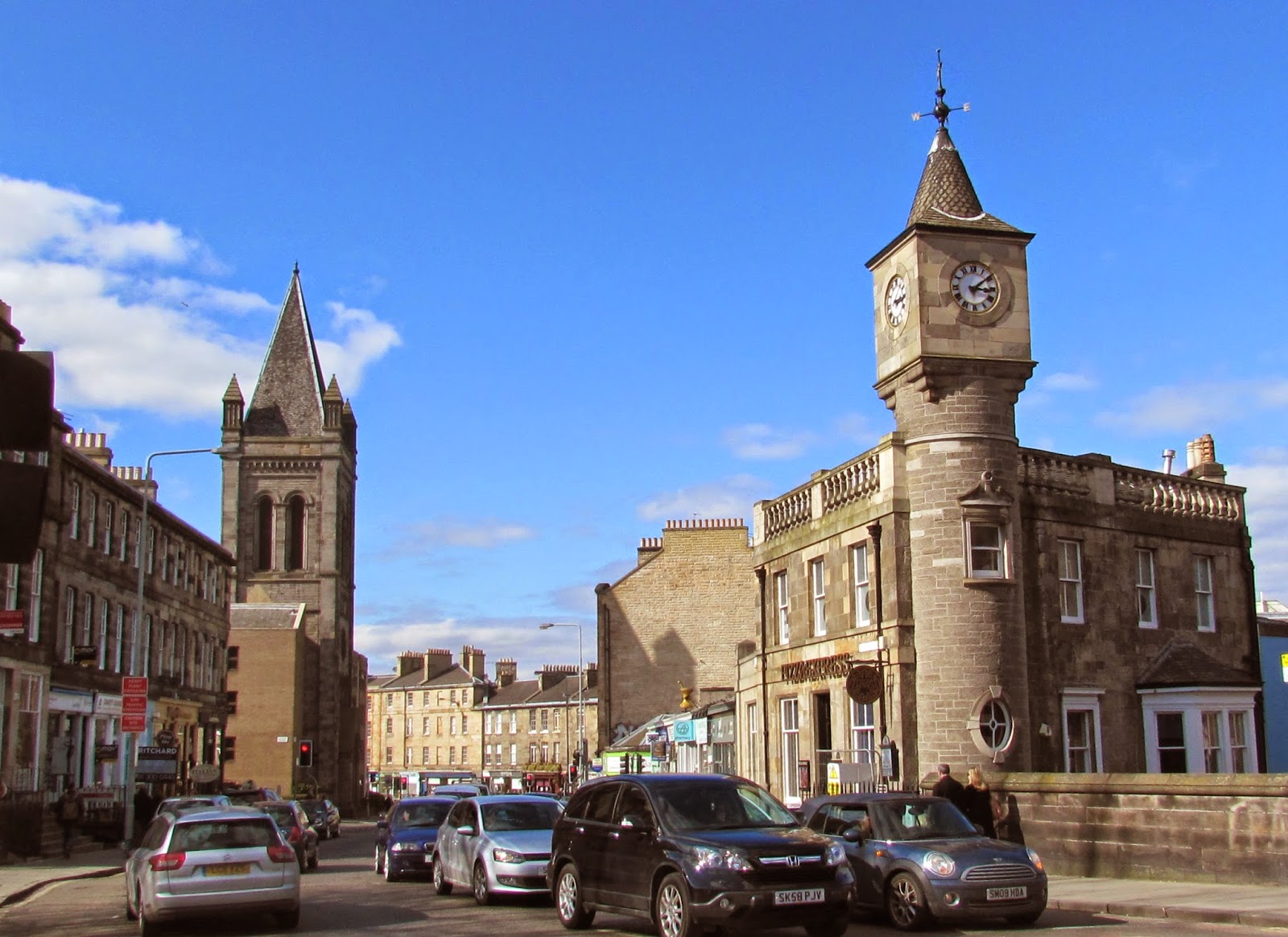 Beyond the New Town, the land shows more and more evidence of industrialisation. However, it is the houses which first show the differences. Here are the back gardens of some grand Georgian terraces at Stockbridge, seen from the Deanshaugh footpath just below the 'stock bridge' itself, rebuilt in 1786 in stone to replace the timber constructions which preceded it. 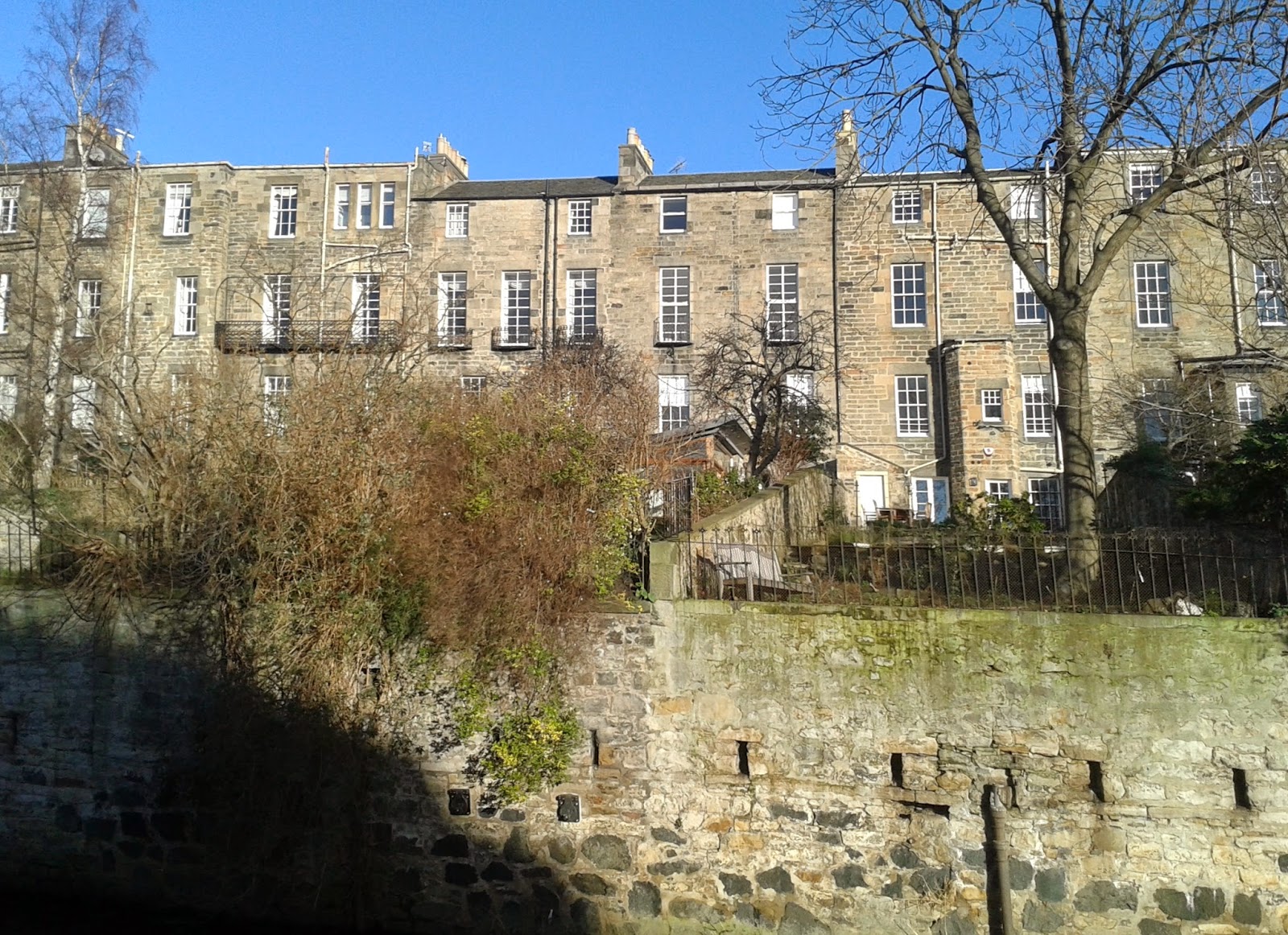 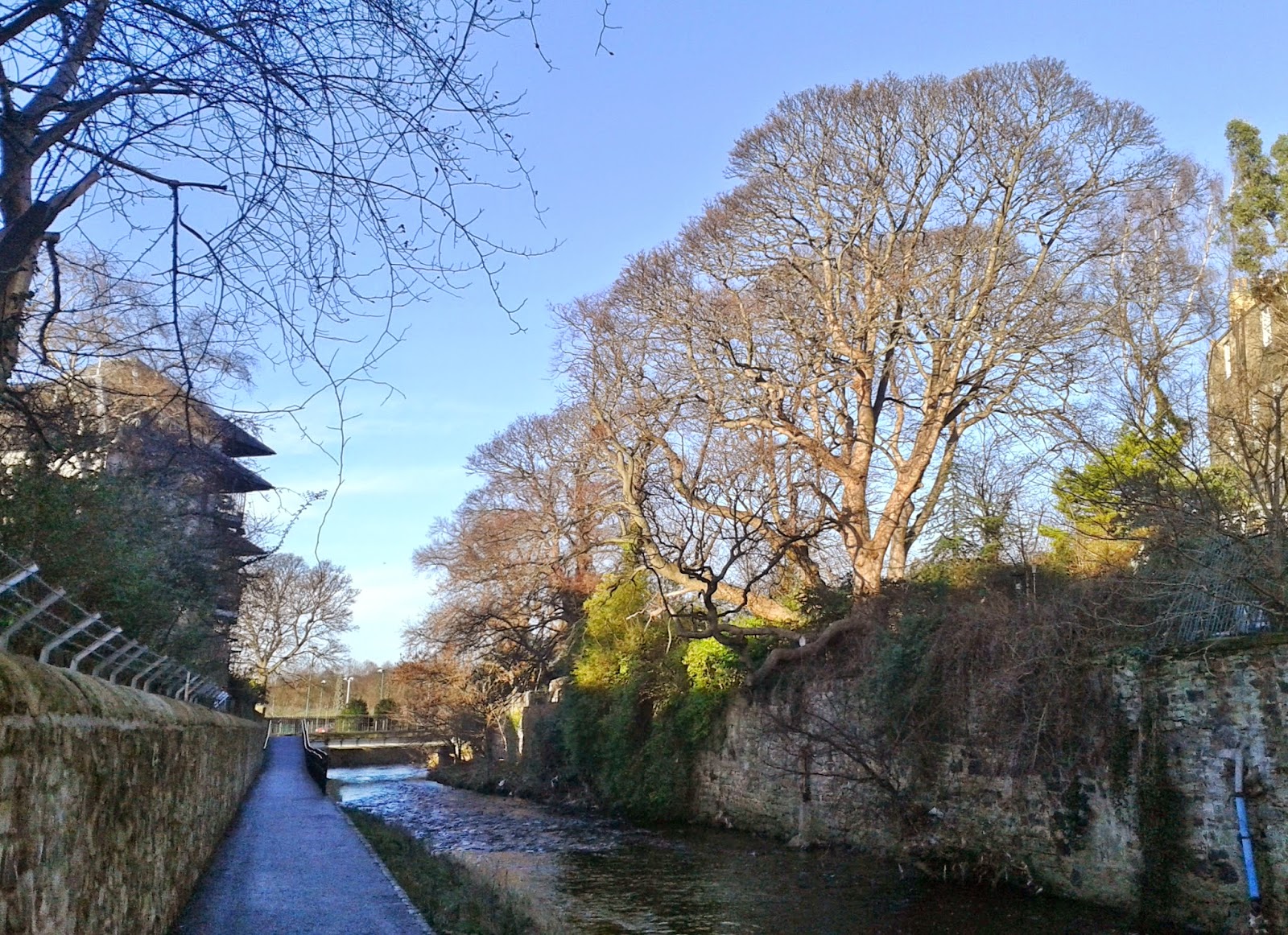 Gradually, the winter trees begin to reveal landmarks which would normally be hidden. The Rocheid footpath, named after the family which used to own the land which later became the Royal Botanic Gardens, follows the north bank of the river, skirting the edge of the Gardens. On the south bank, we can see rows of colonies, a style of workers' dwelling which is unique to Edinburgh. 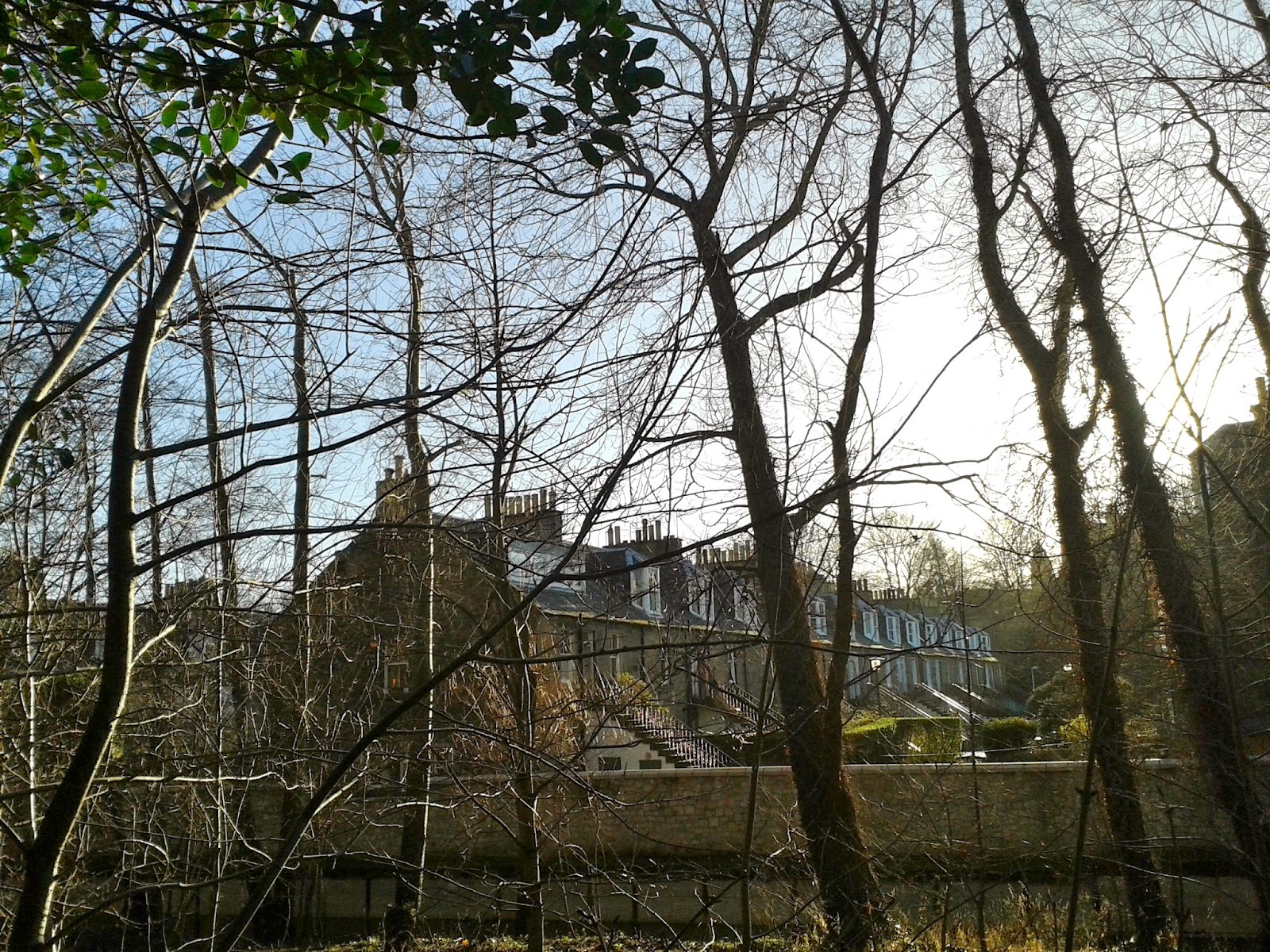 The first area of colonies housing was built here in the environs of Stockbridge in the second half of the nineteenth century, the foundation stone of the first house being laid in 1861. Thereafter, further streets of similar housing were built in various parts of Edinburgh. There are colonies houses near where we live in the Holyrood area and you can also find them over to the south west. The colonies by the Water of Leith were built by the Edinburgh Building Cooperative Company, whose aim was to provide low cost housing for workmen and their families. The stonemasons who were the founders of the colonies development, had been 'locked out' by their employers for demanding a shorter working day. The Company aimed to enable working people to own shares and to build their own houses. In twenty years, enough houses were built for 2000 people in this area of Stockbridge.

Colonies housing was built in relatively salubrious areas, well away from the squalour of the Old Town (the High Street, Canongate, Cowgate and Grassmarket area). Colonies houses comprise two apartments, the smaller on the ground floor and the larger on the first floor and roof area, reached by an external staircase. You should be able to make out the staircases on the photo above. Not visible at this distance, are carvings of tools typical of different trades on the gable ends of each block. 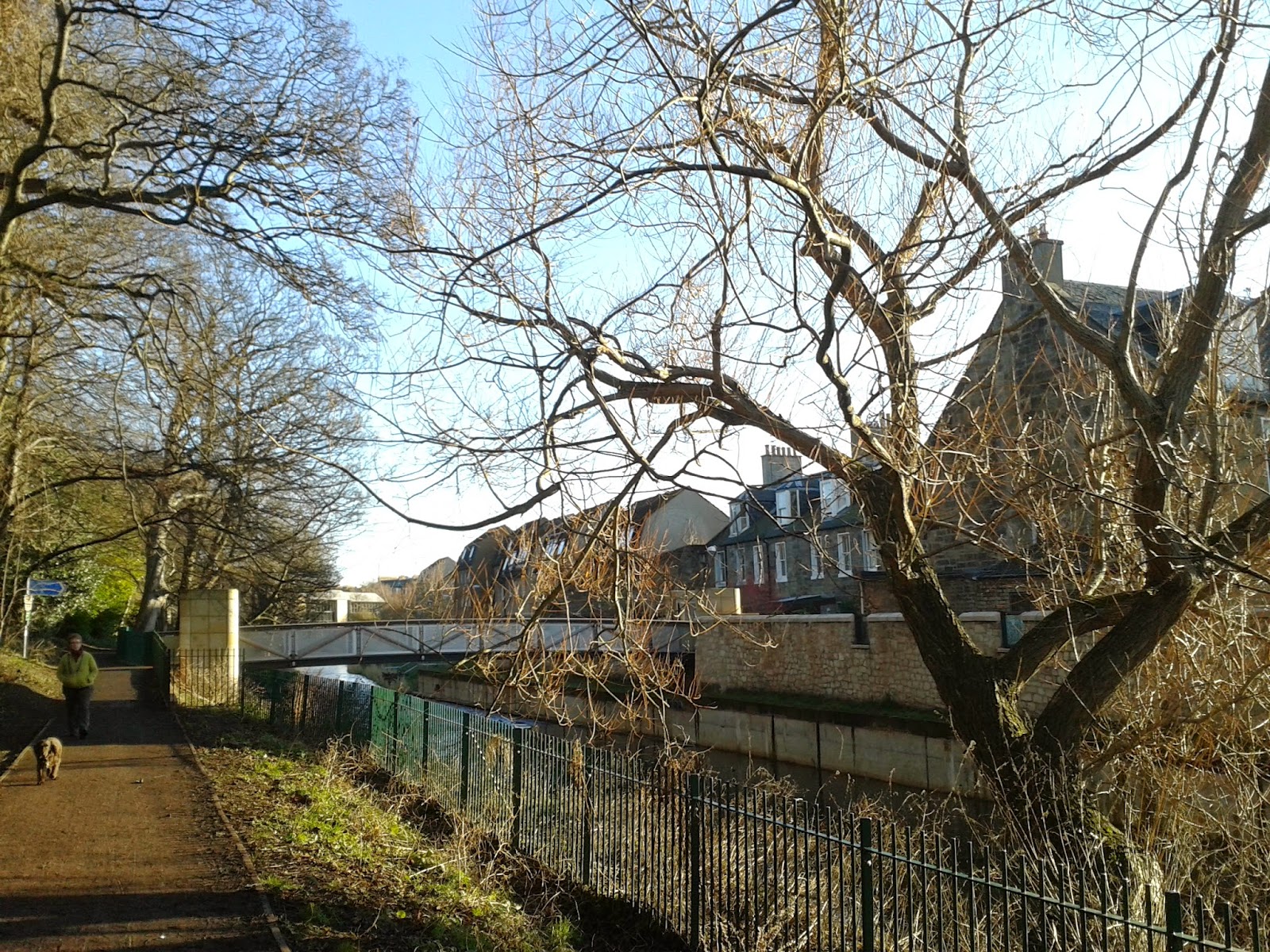 The path now follows a line of residential housing, interspersed with commercial property and leading to the village of Canonmills on the southern bank. This once rural settlement was so called because the canons of Holyrood Abbey were granted the land by King David I for the construction of mills which used the flow of the river to power the machinery. Robert Louis Stevenson was born in Howard Place and went fishing in the River Leith, as have many boys before and since. 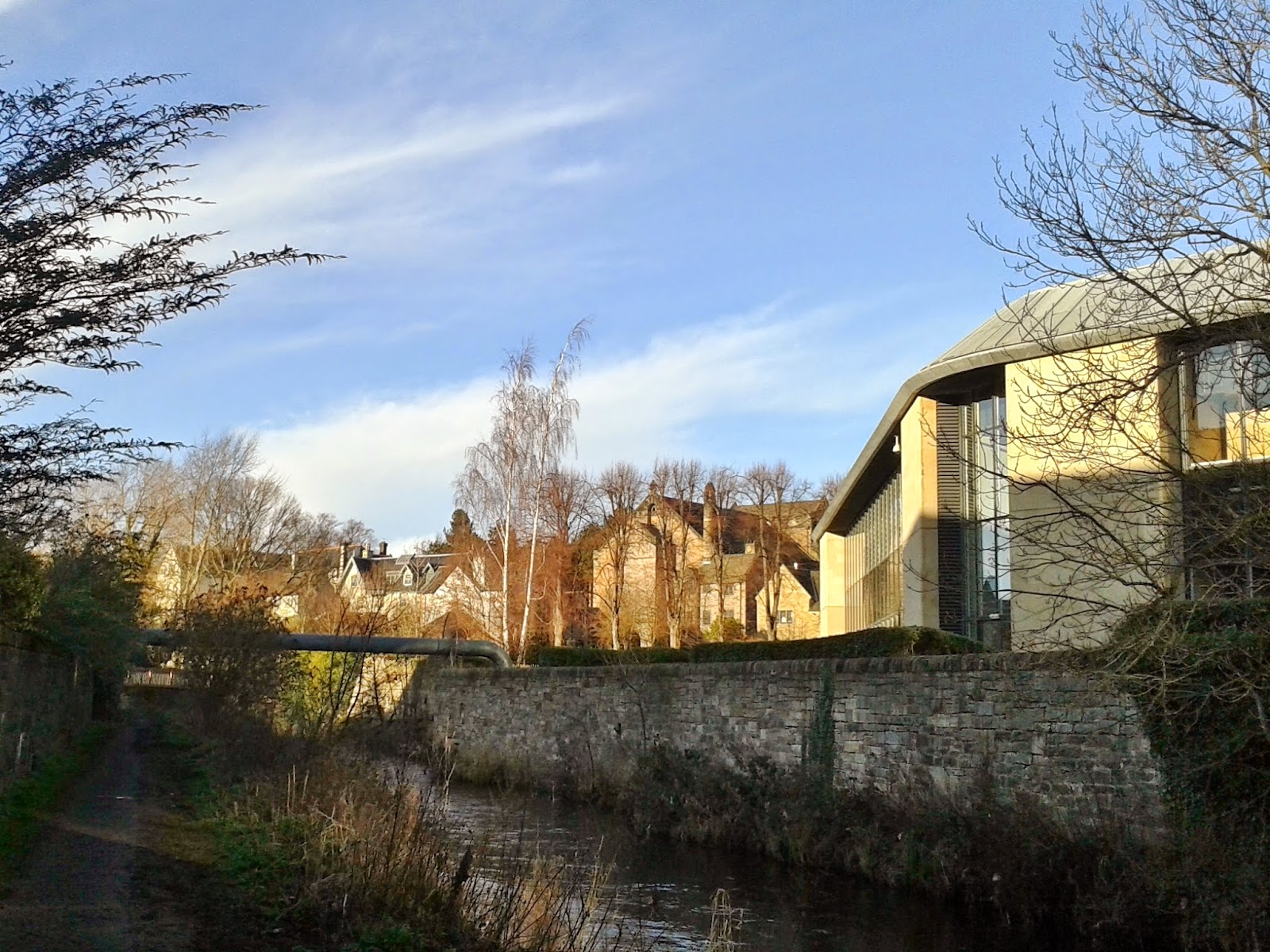 On the northern bank, the path skirts the back of Warriston. 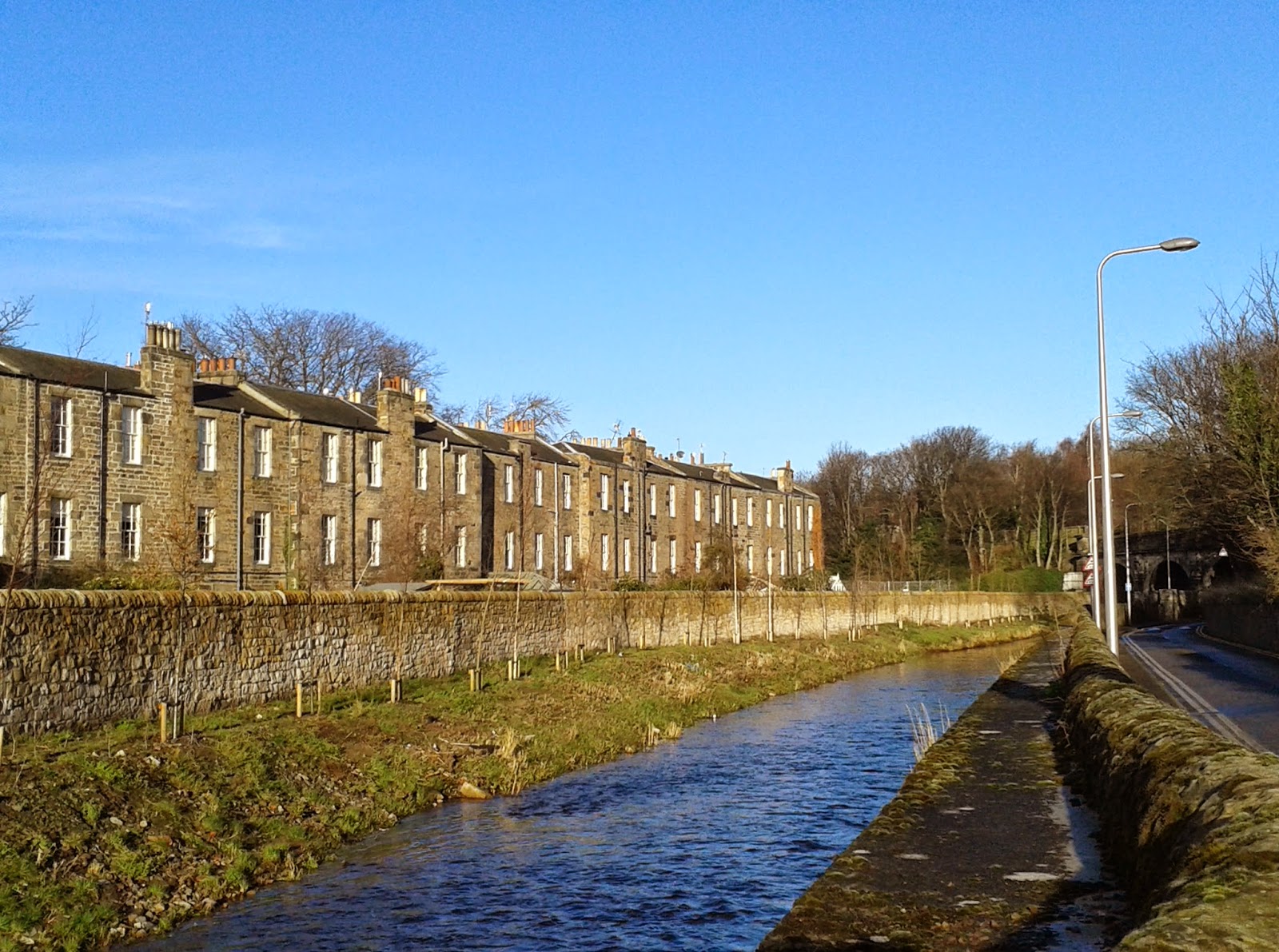 Across the river, lies the Powderhall area, once the site of a well-known stadium where the sprinter Eric Liddell once competed and which was associated with various sports. There are various theories as to how the village may have got its name. One suggestion is that it was the site of a gunpowder factory. Another that it derives from the name Paddock Hall, one of many grand houses in the area in the seventeenth and eighteenth century. This stretch of the river is called Puddockie probably from a similar derivation rather than the Scots word for a frog, puddock. See the Powderhall Village Owners' Association website for an interesting account of the history of the area and its place names. 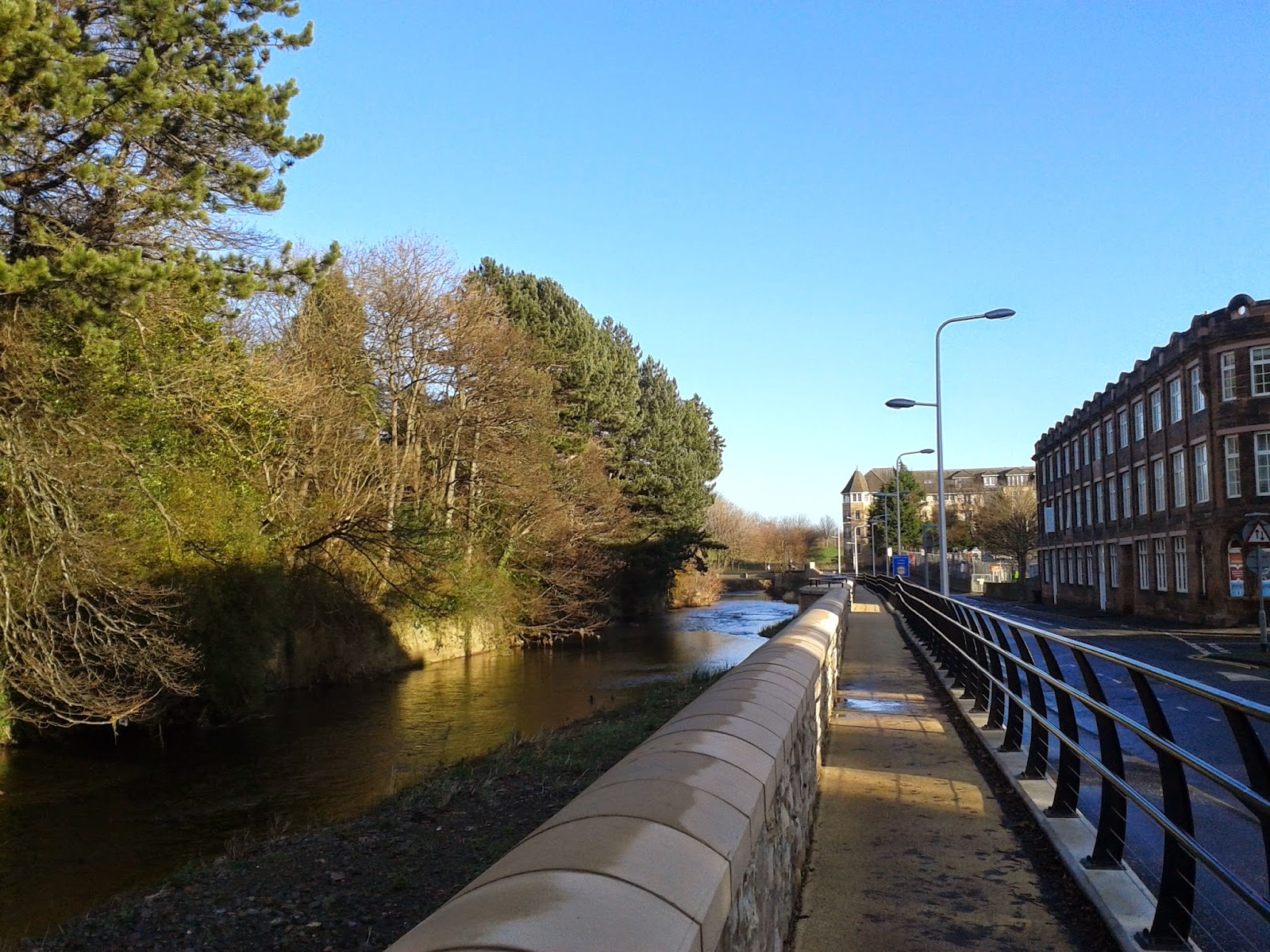 On the right of the photo above, you can see commercial property and beyond it the first of several large blocks of modern flats built on the area of the old stadium. Several industries operated here over the years, including tanning and grain and paper mills, for which the mill lade below, Redbraes Weir, supplied power. 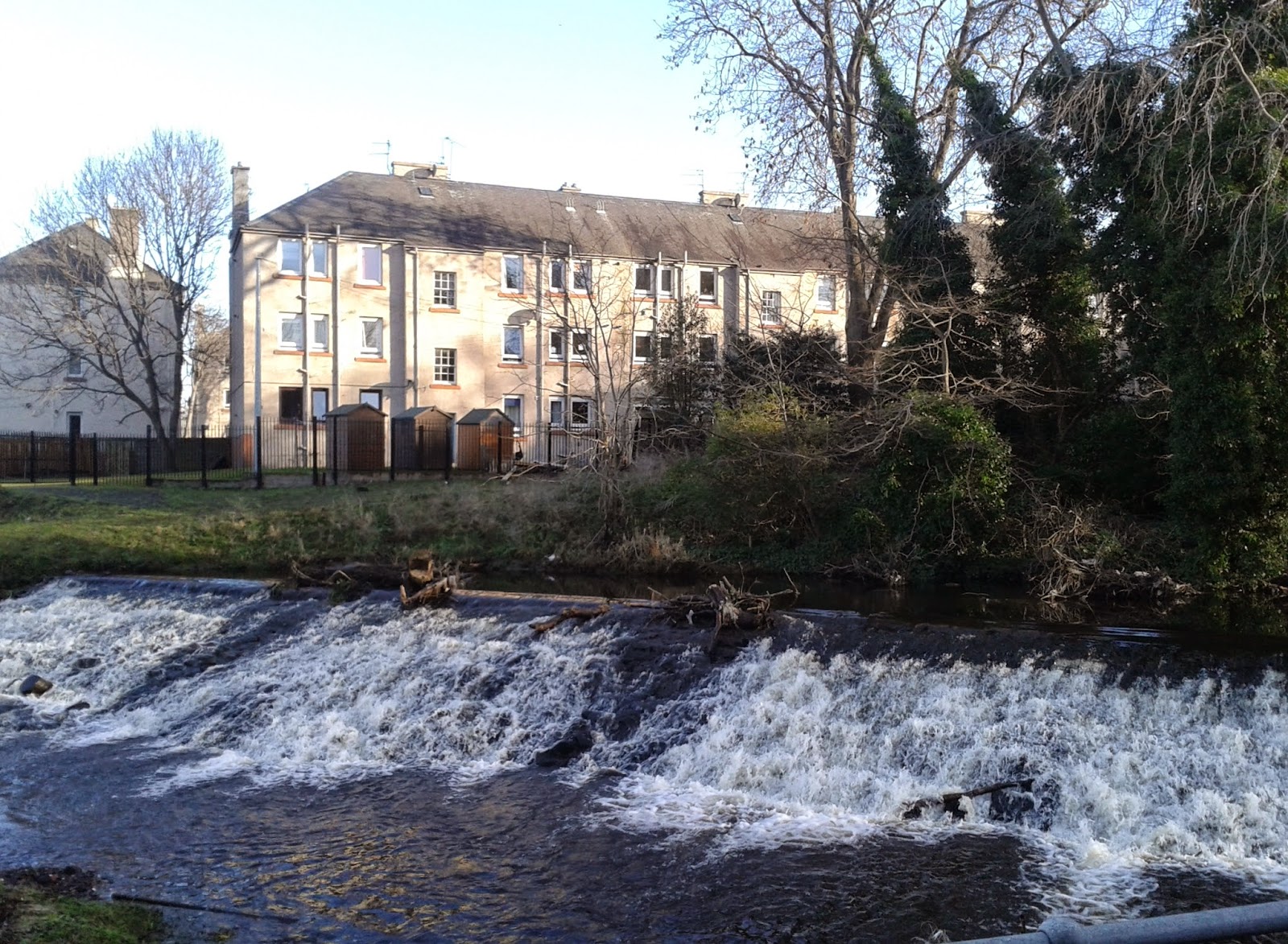 Here, in the village of Bonnington, the river crosses the border from Edinburgh to Leith, a town in its own right. 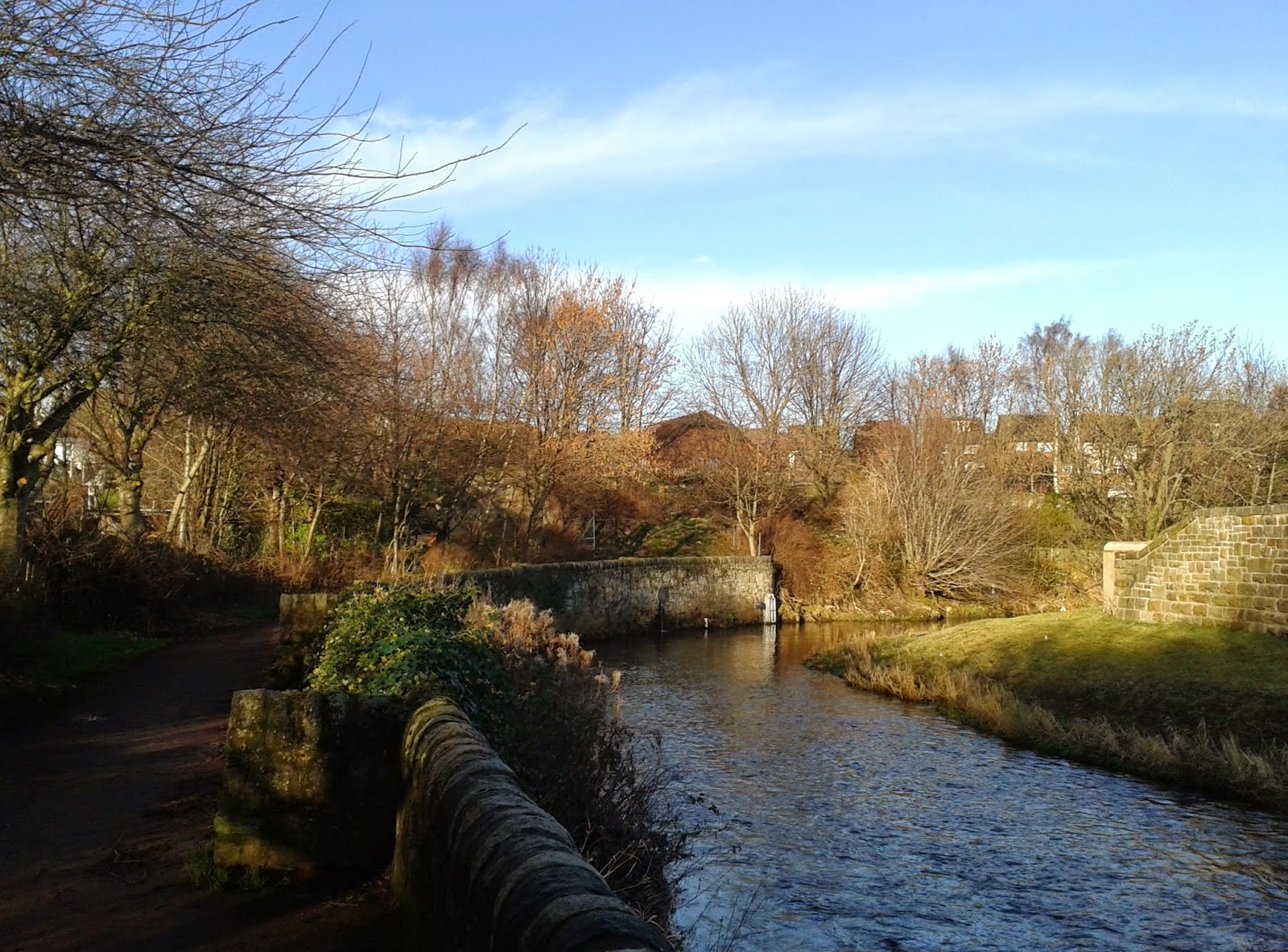 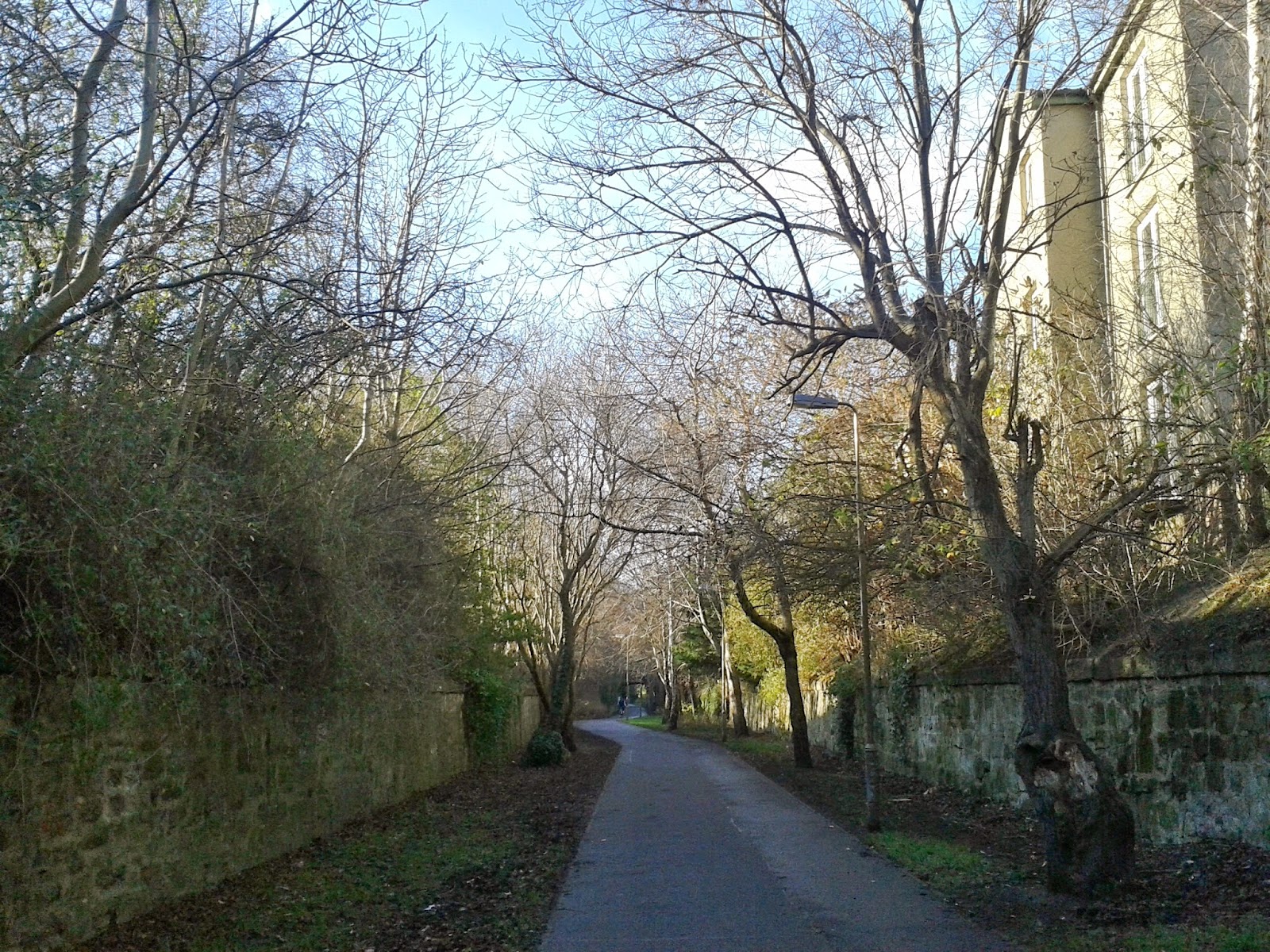 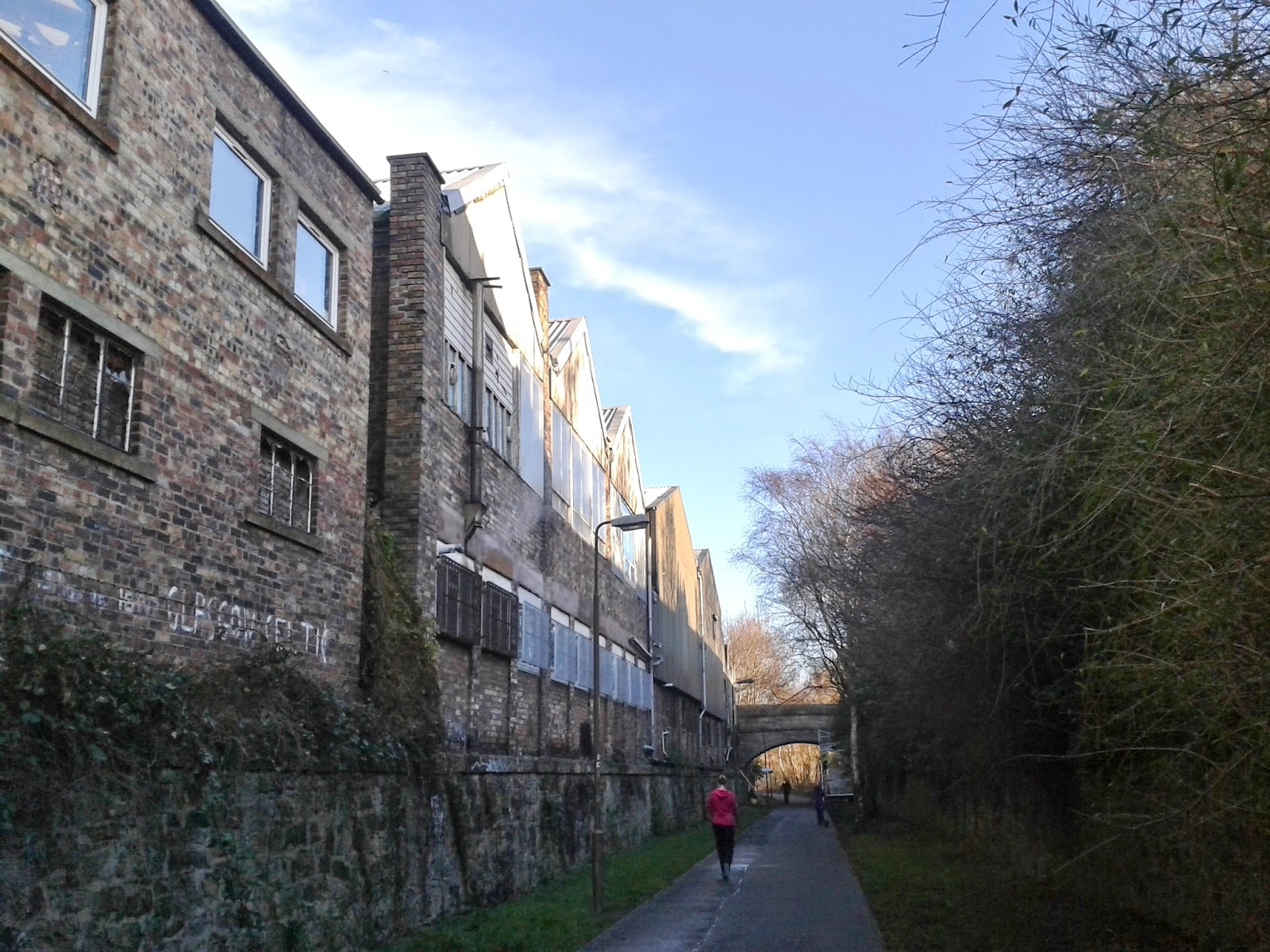 It soon starts to follow an old railway line. 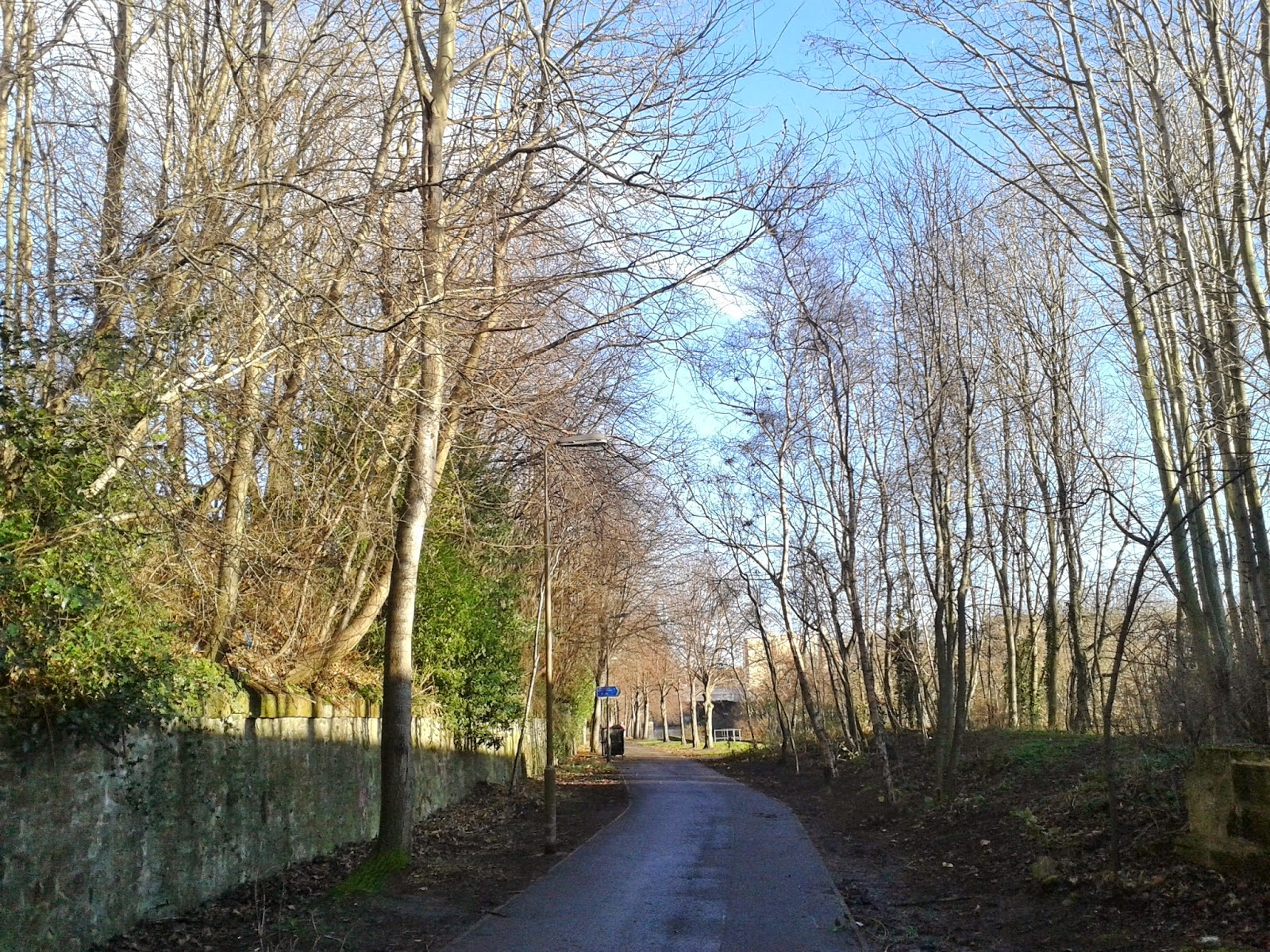 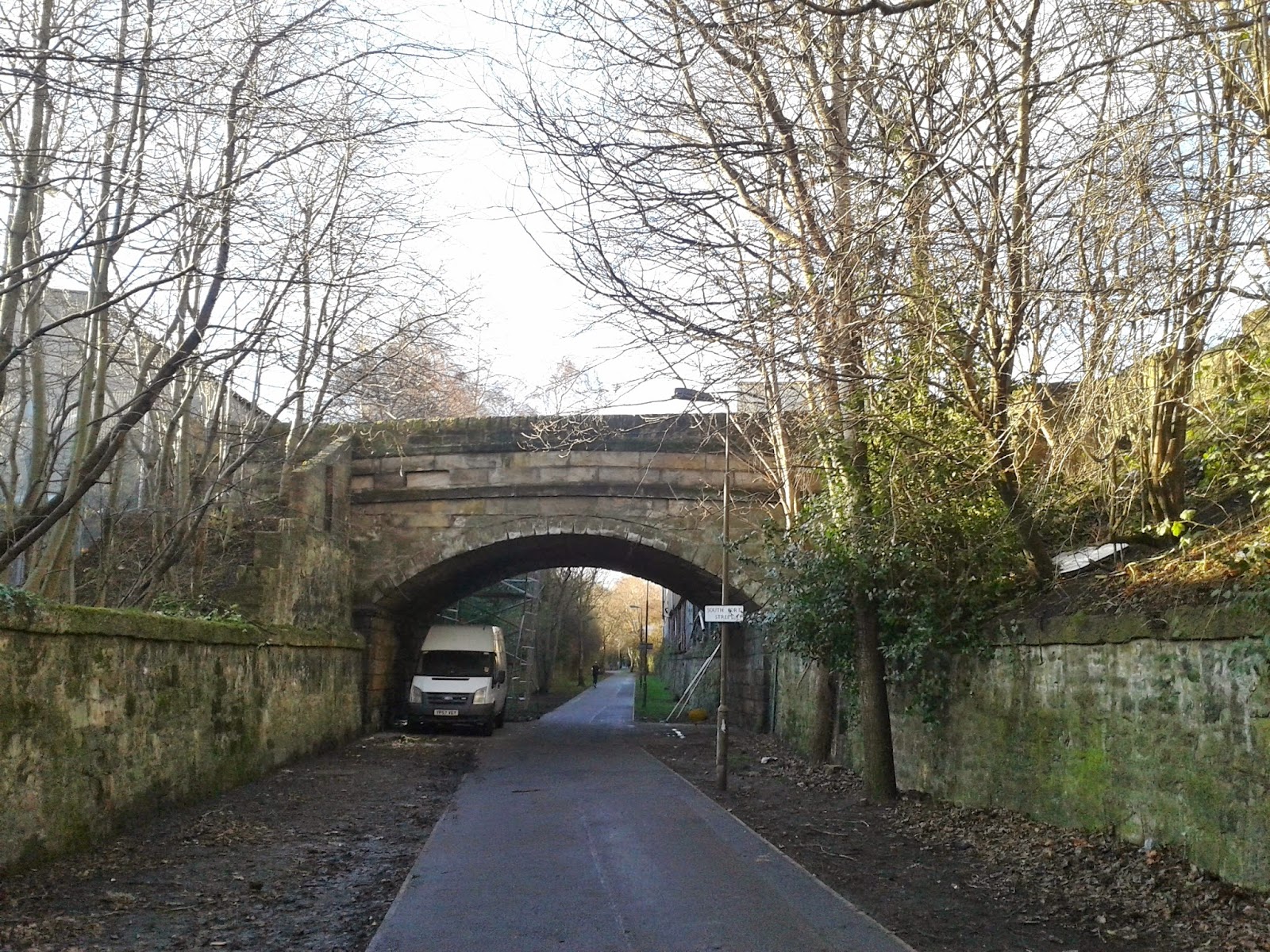 Soon the river broadens out. 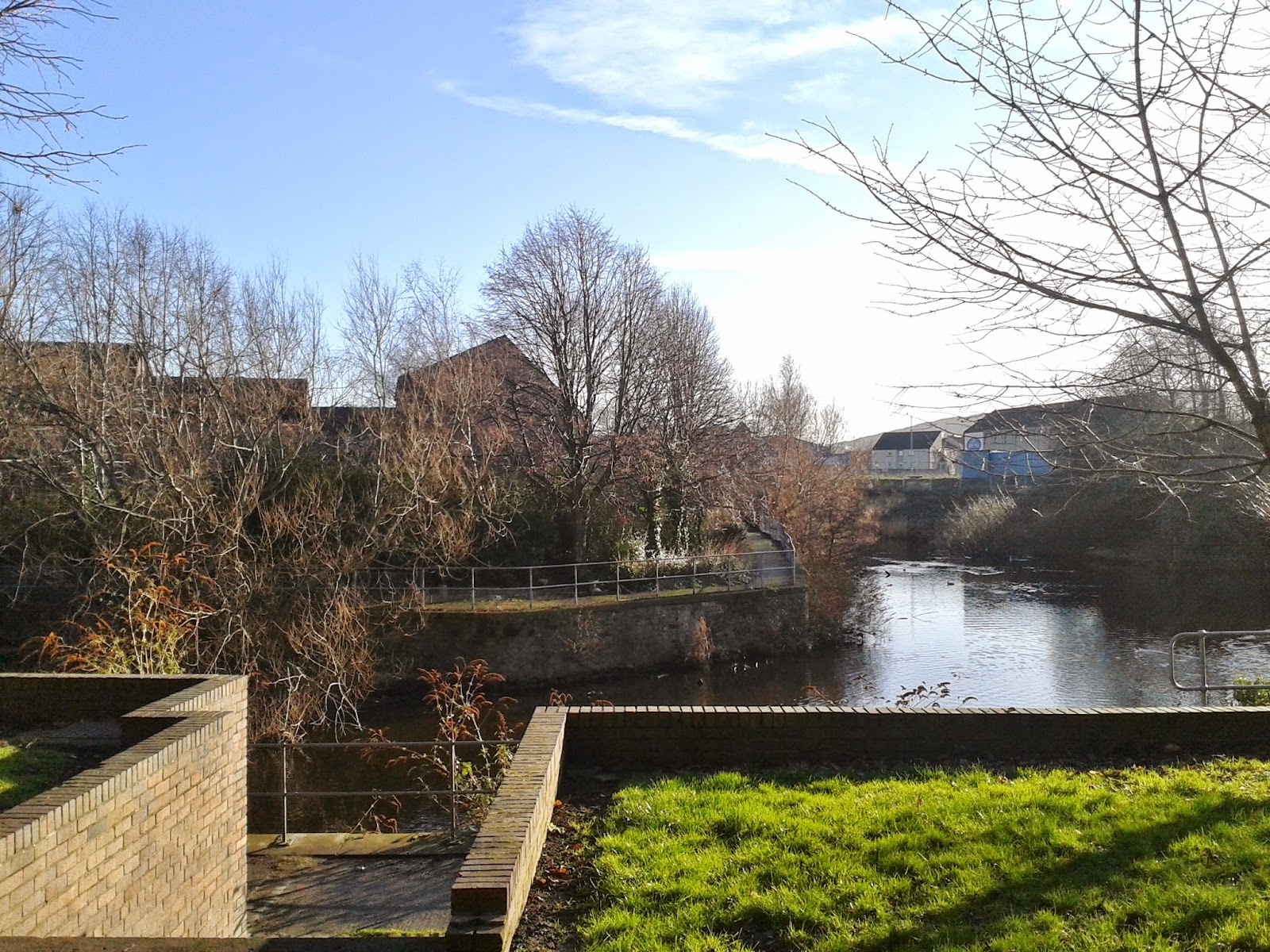 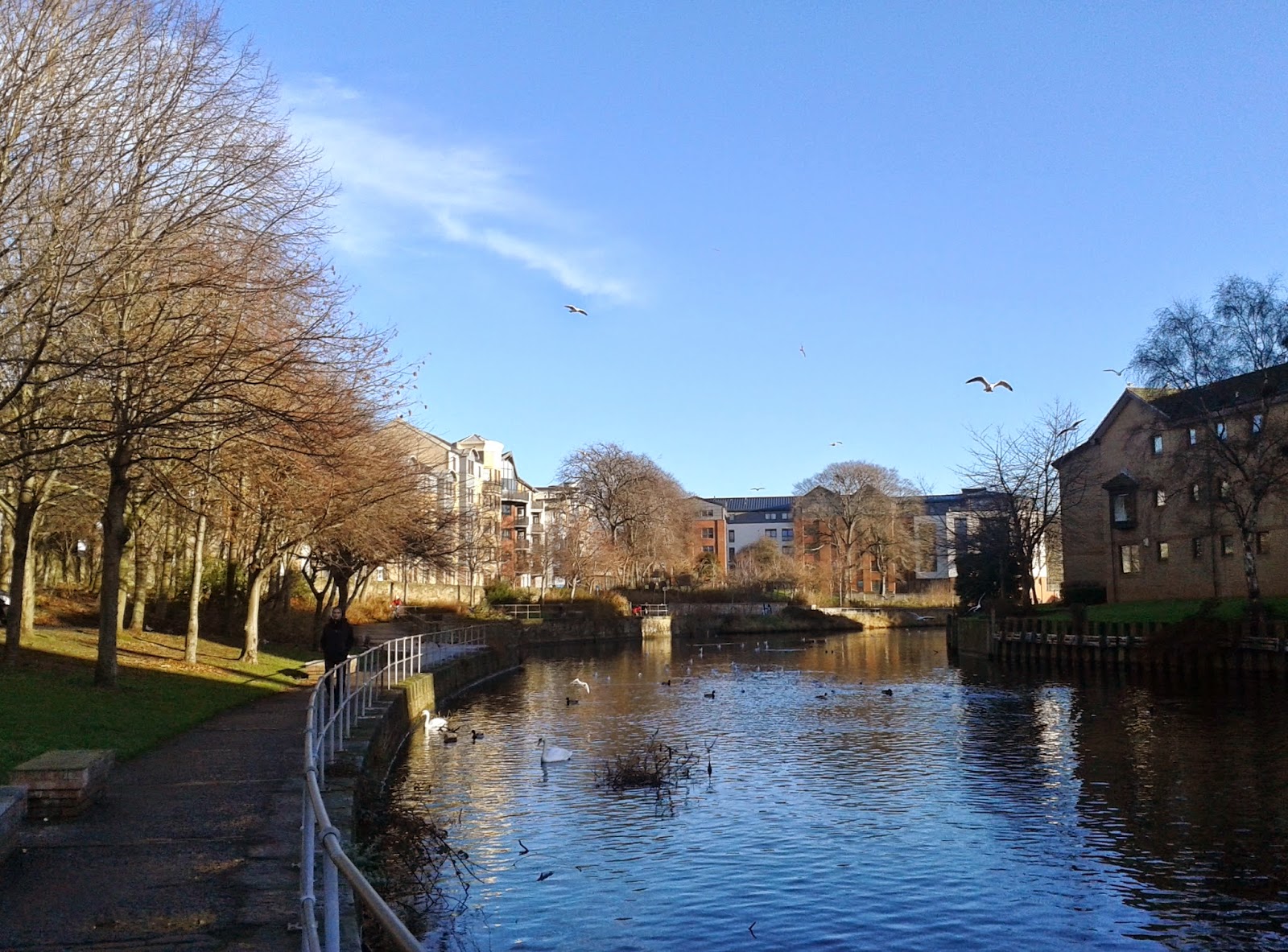 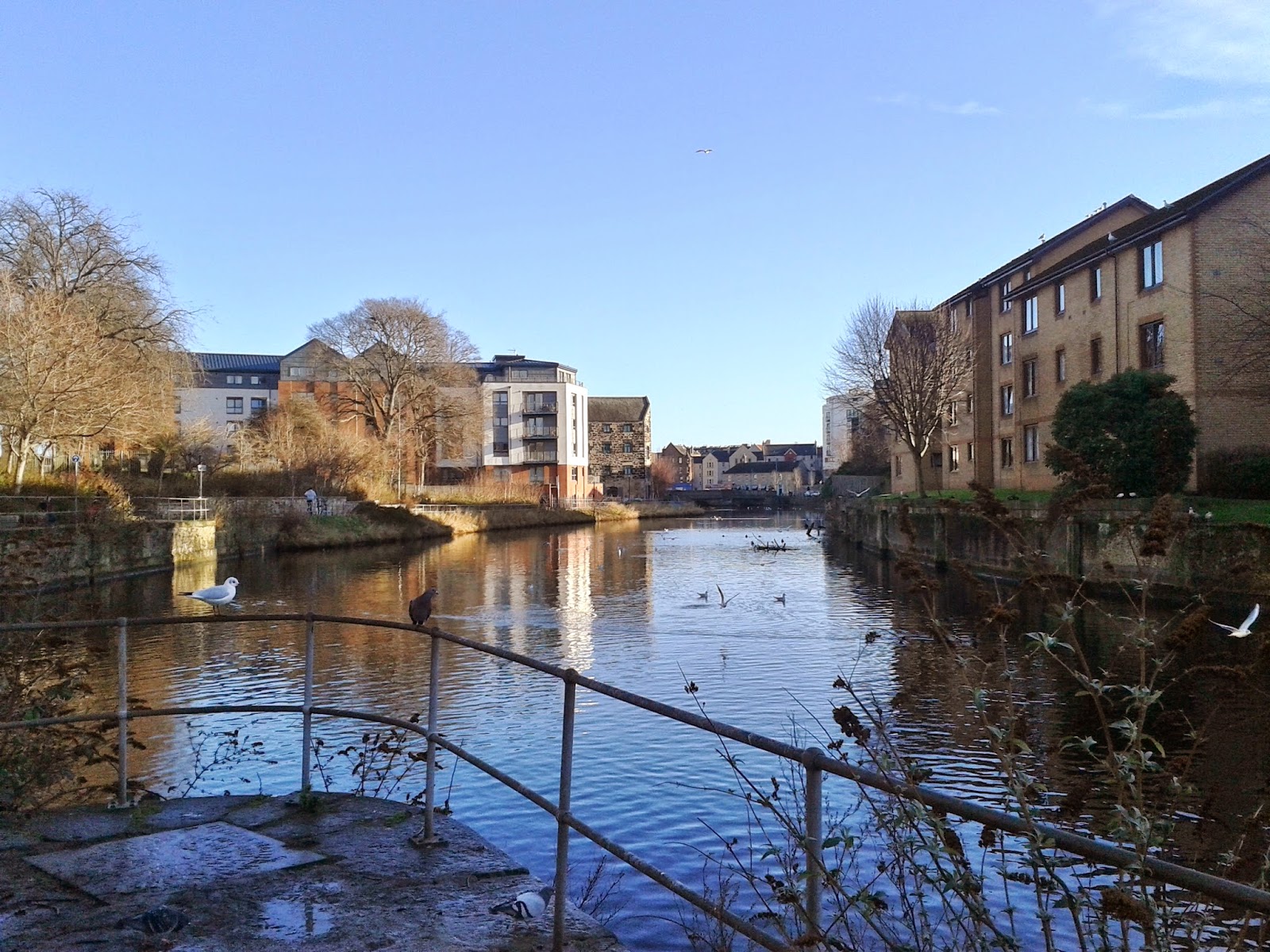 From here onwards, warehouses begin to line the banks, some of them converted into attractive flats and interesting restaurants. 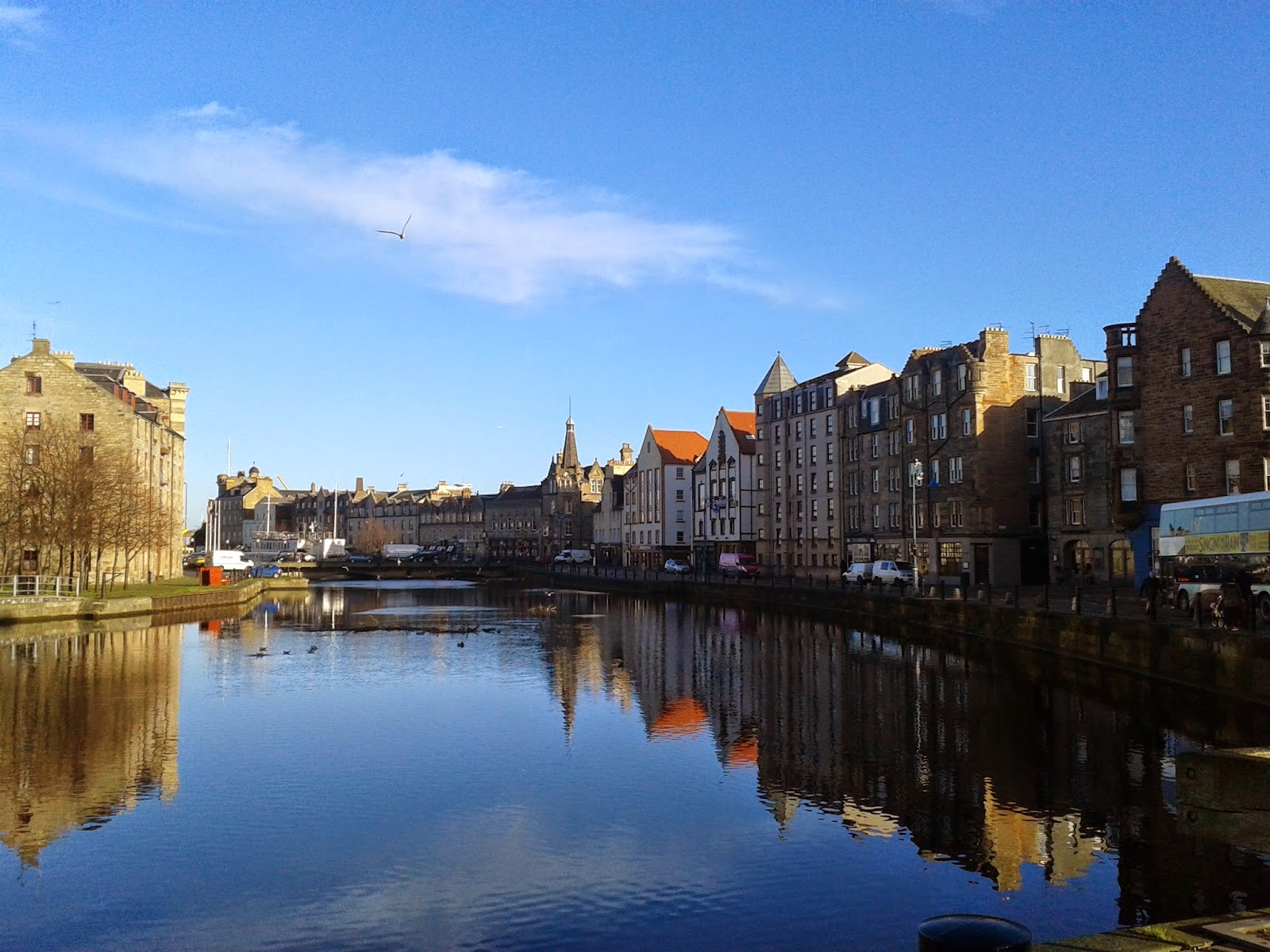 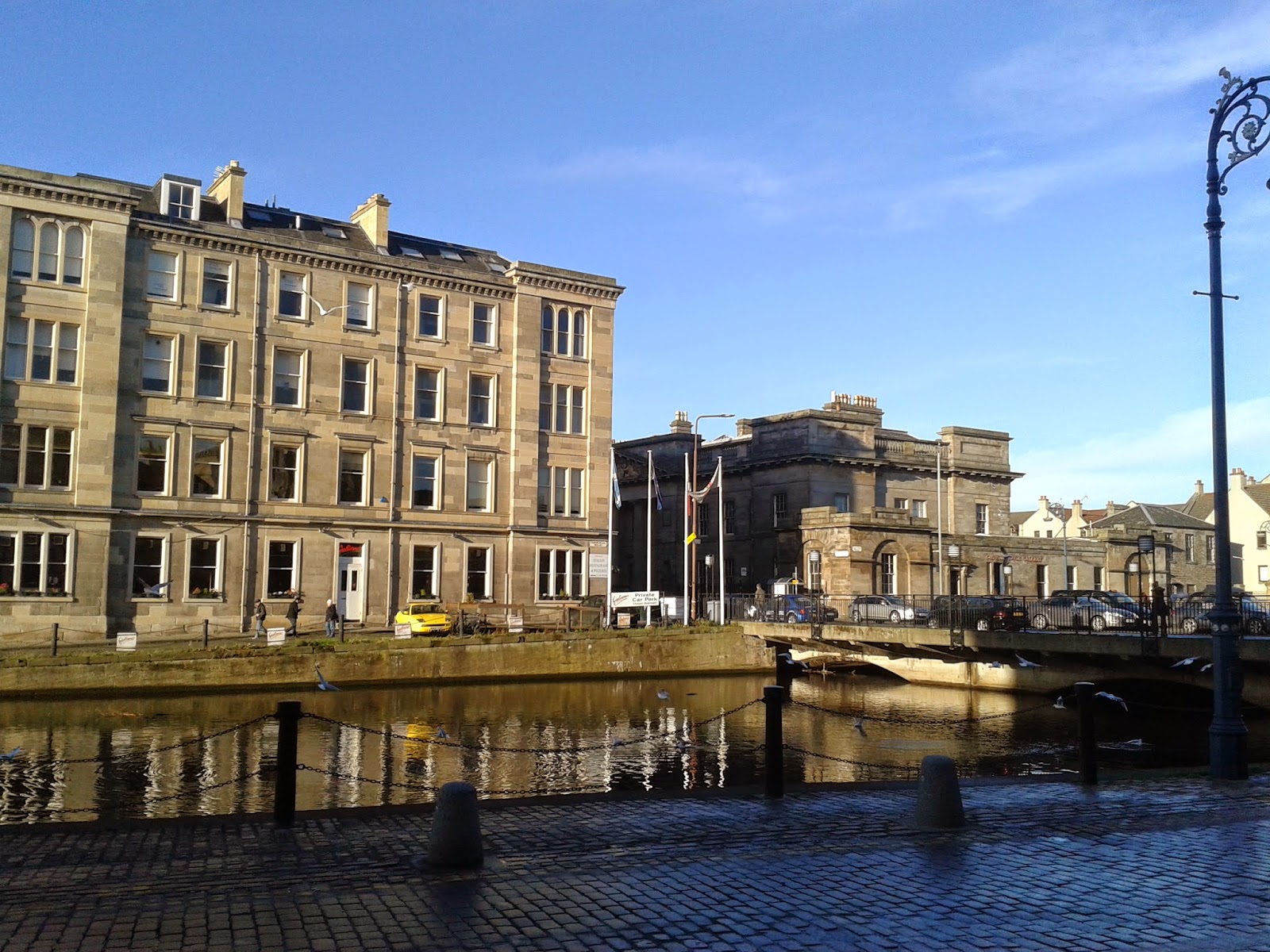 Grand doorways and turrets demonstrate their origins as civic buildings. 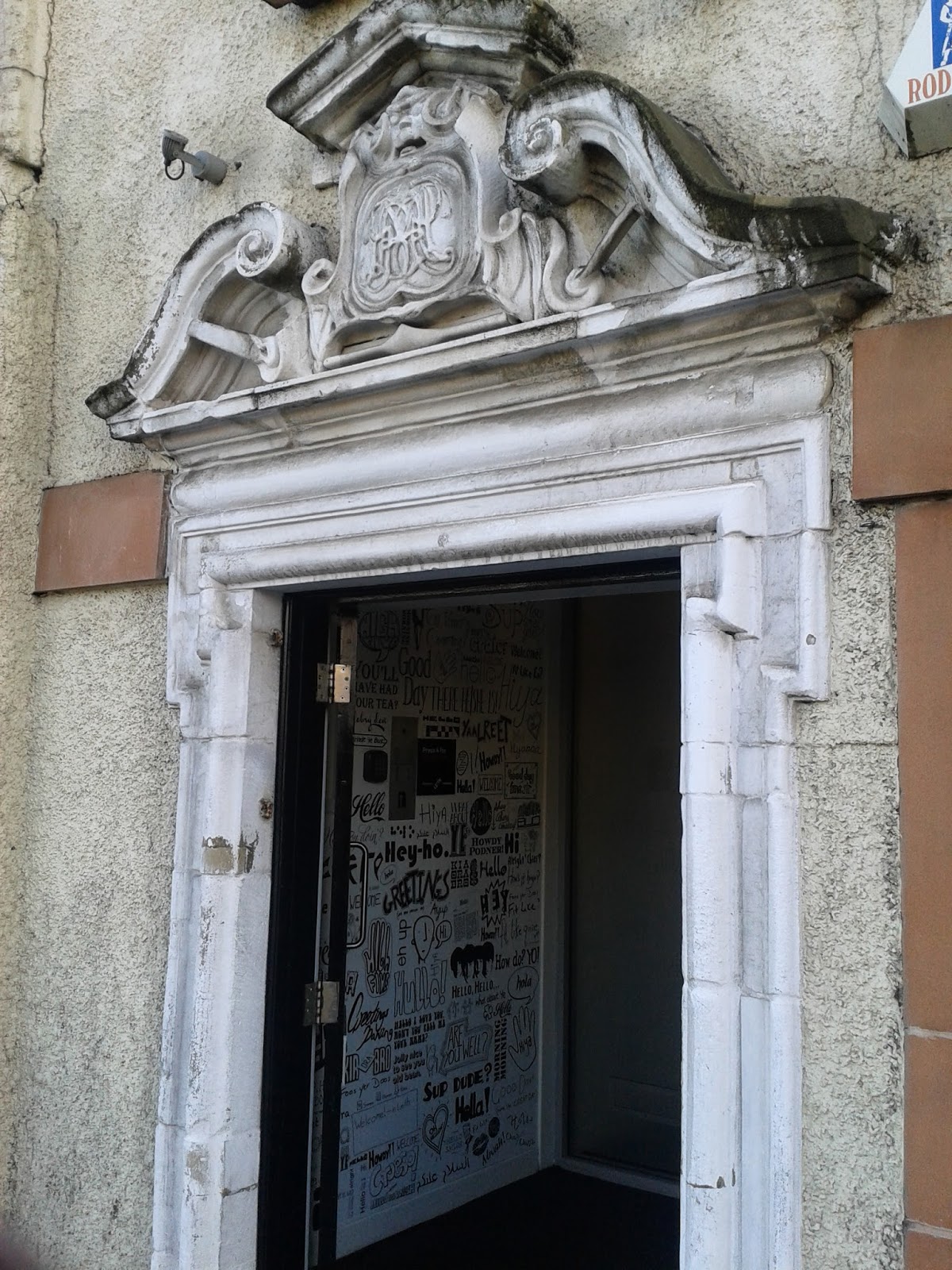 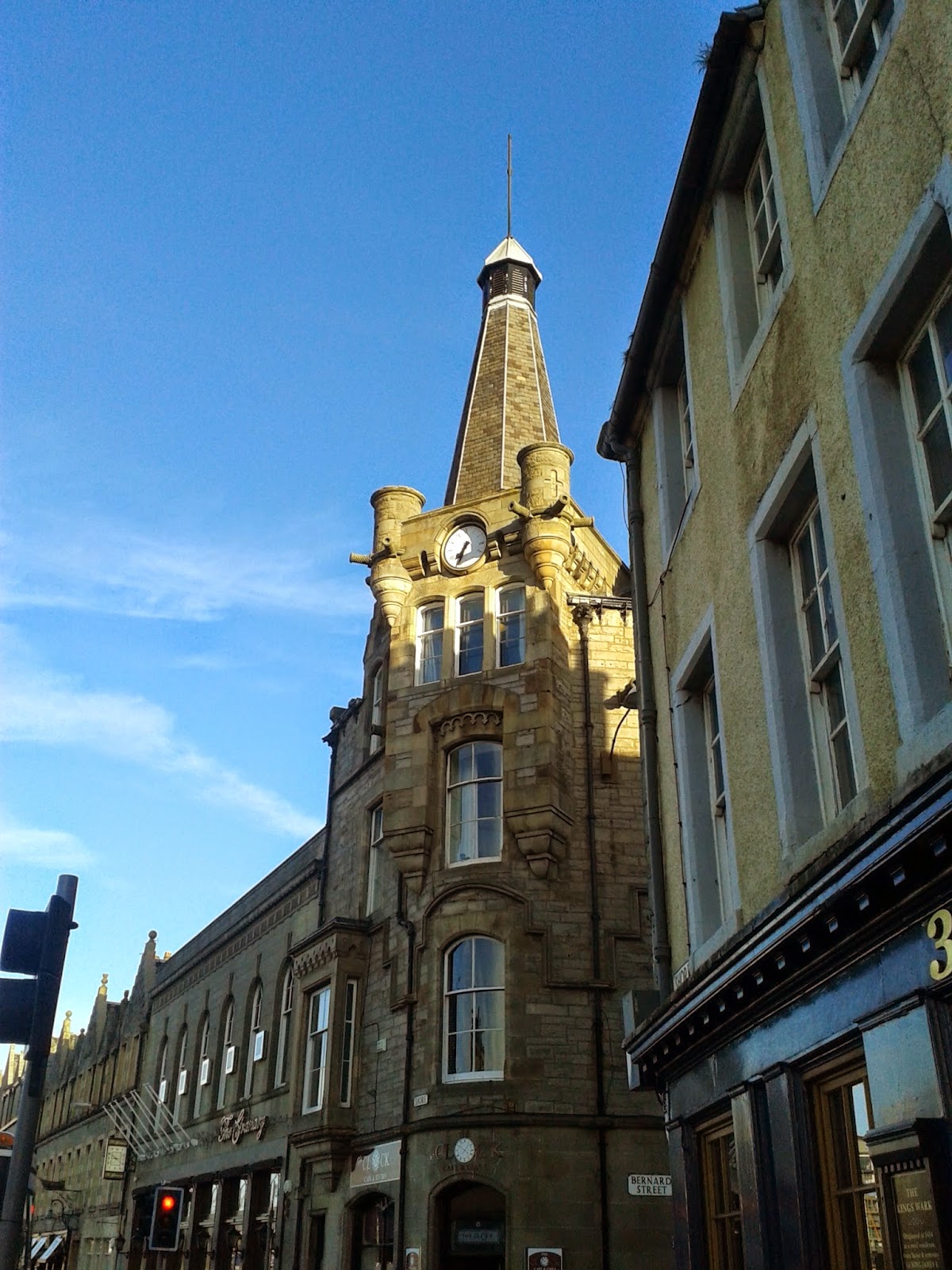 Soon we are at the Shore area, renowned for its restaurants and nightlife. And here we will stop. We haven't followed it to where the river joins the docks, or, indeed, looked at what remains of the old Leith docks or admired the recently constructed government, commercial and leisure buildings which have replaced them.The proud town of Leith deserves better than to be tacked onto a post about its river. In due course we will focus on its wonderful architecture and fascinating history in their own right.

In the meantime, we will leave this country river now it has meandered its way - almost - to the sea. The Water of Leith doesn't brag about its presence; it doesn't force itself on our attention. It creeps quietly round the backs of houses, its thick tree cover evidence of its essentially rural nature. Edinburgh has a lovely river. It may not be as immediately impressive as the powerful Tay in Perthshire or the broad reaches of the River Dee in Aberdeenshire. However, it brings considerable pleasure to its citizens and life to the places where they live and work. The Water of Leith is one of Edinburgh's treasures.


Much of the information on which this post draws comes from a guide published by The Water of Leith Conservation Trust.

Other information has been taken from the Powderhall Village Owners' Association website.

You may also be interested in other posts about the Water of Leith:

A walk by the Water of Leith from Roseburn to Stockbridge: mills, millionaires and monstrosities

Posted by Elisabeth Ritchie at 19:55