A day out from Edinburgh: Jedburgh

Just an hour or so down the road and yet a whole world away. No sooner have you crossed Edinburgh's ring road following the A68, than you are in another landscape altogether. Gently undulating fields stretch on both sides. 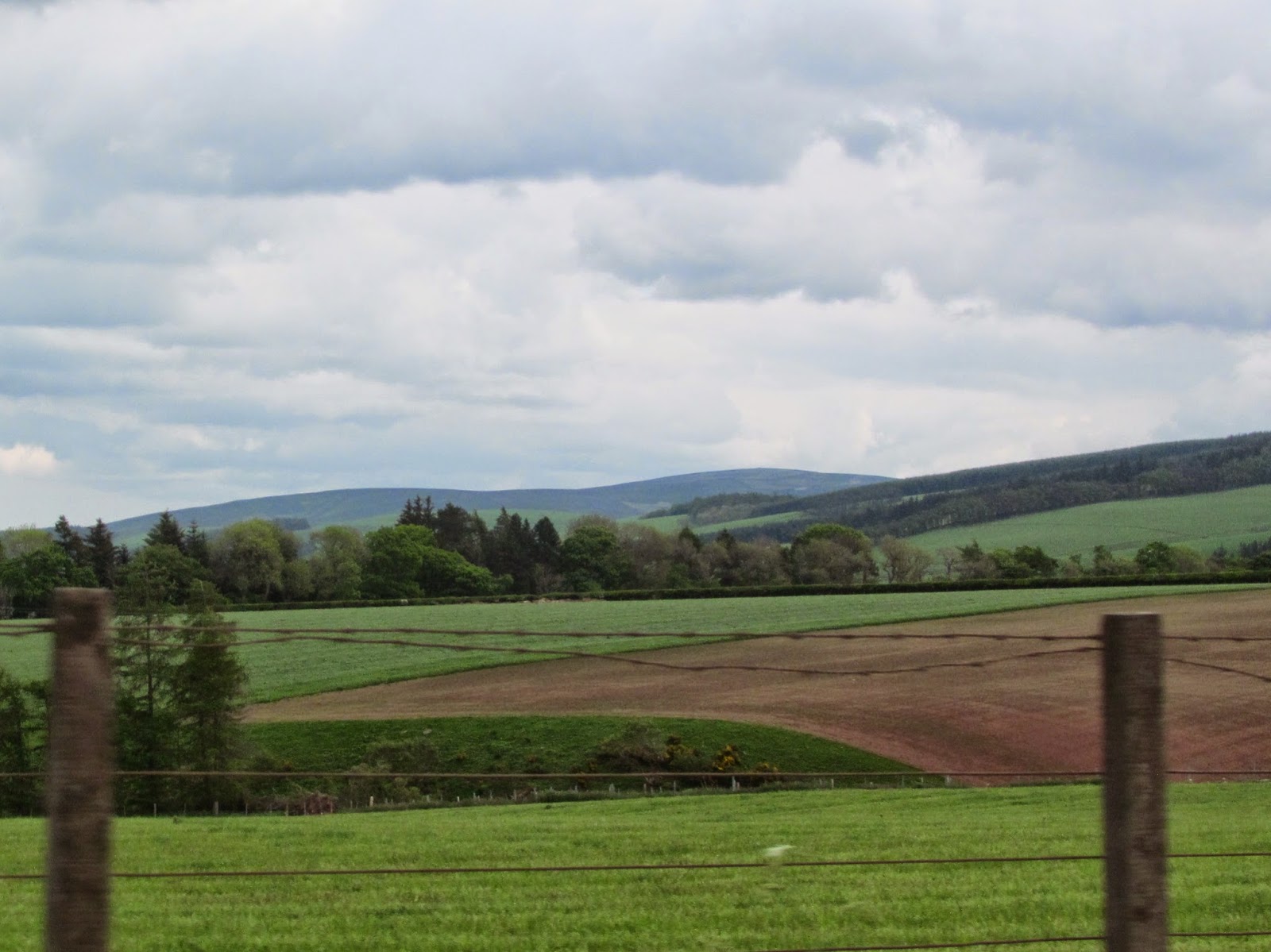 Beyond Dalkeith you start climbing slowly, then more steeply, leaving the volcanic crag of Arthur's Seat behind you. Looking towards the sea on your left, you see Berwick Law, remnant of another ancient volcano, hazy in the distance. Down below lies the flat coastal land of East Lothian. 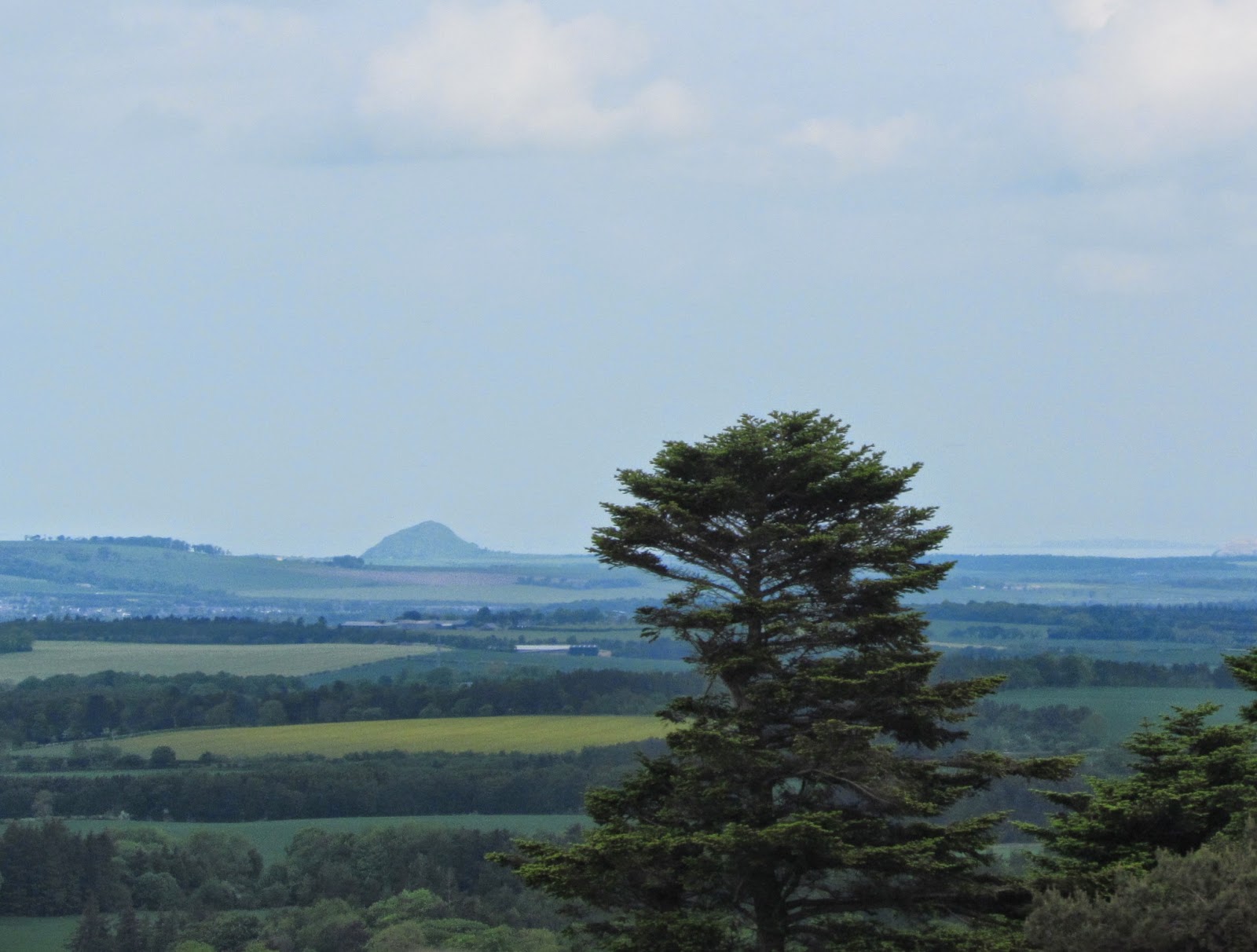 Nothing much grows up here except grass, sheep and wind farms. 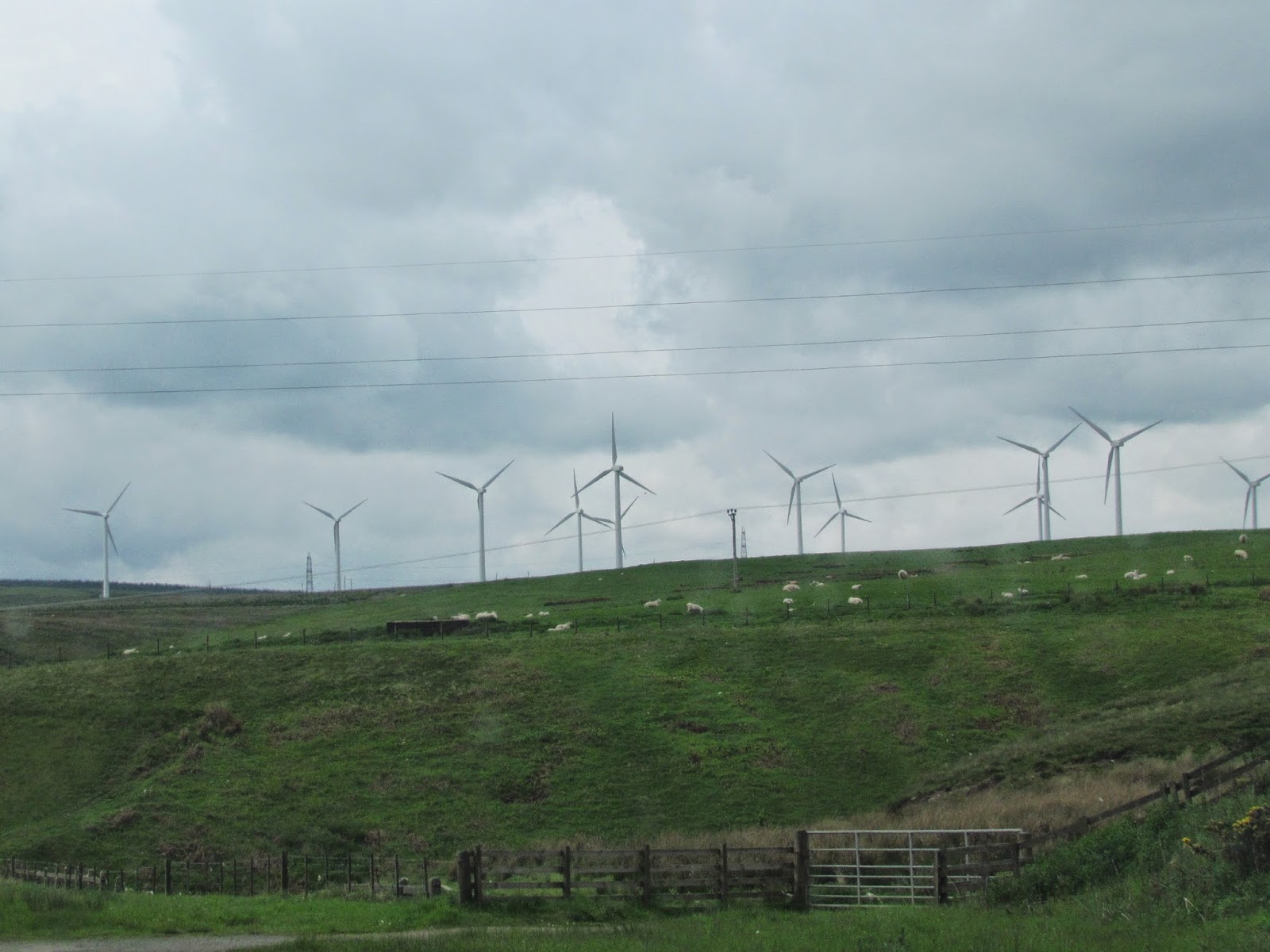 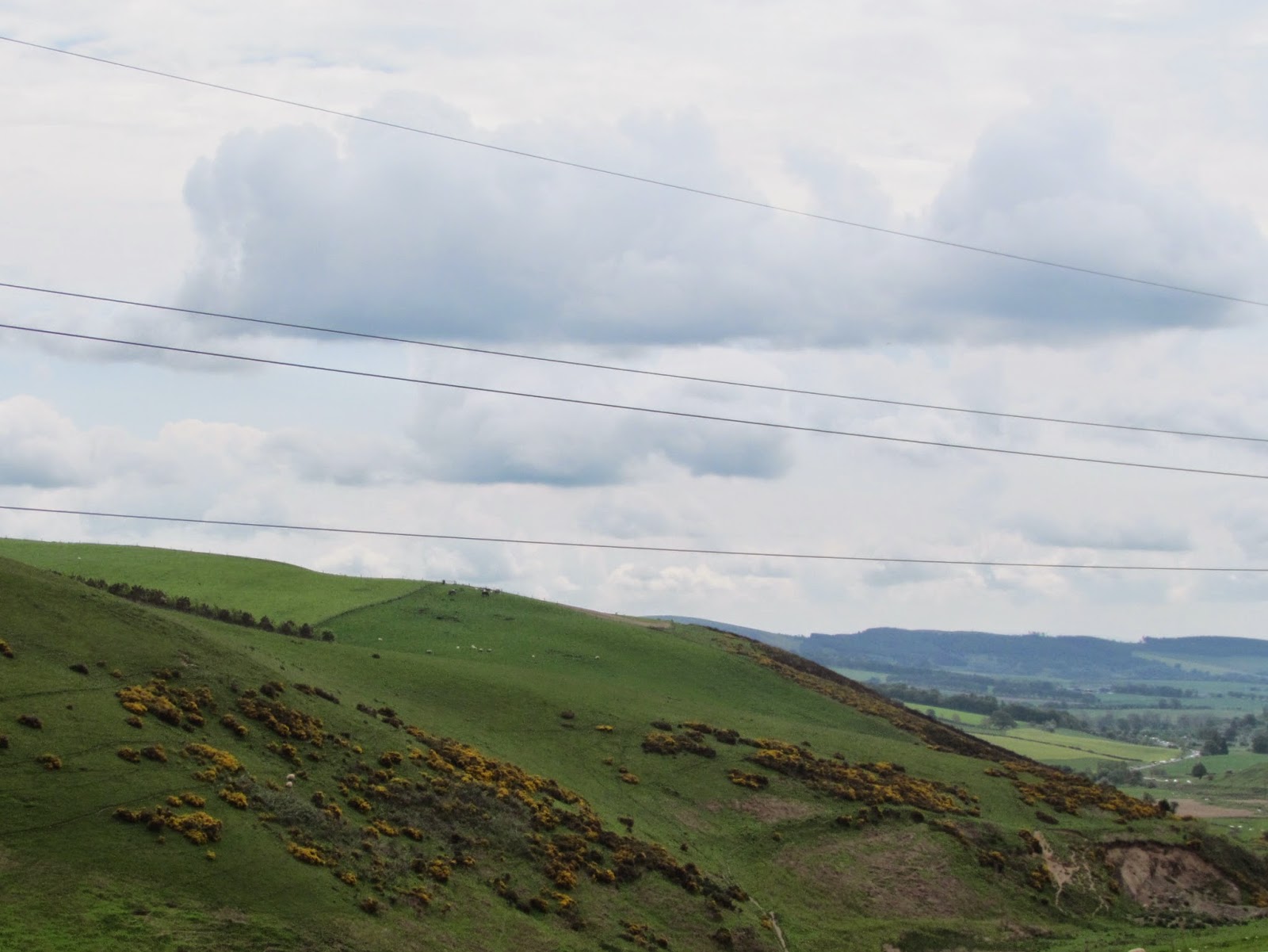 The hills become steeper and more rugged and beneath them snuggle farmhouses - and more sheep. 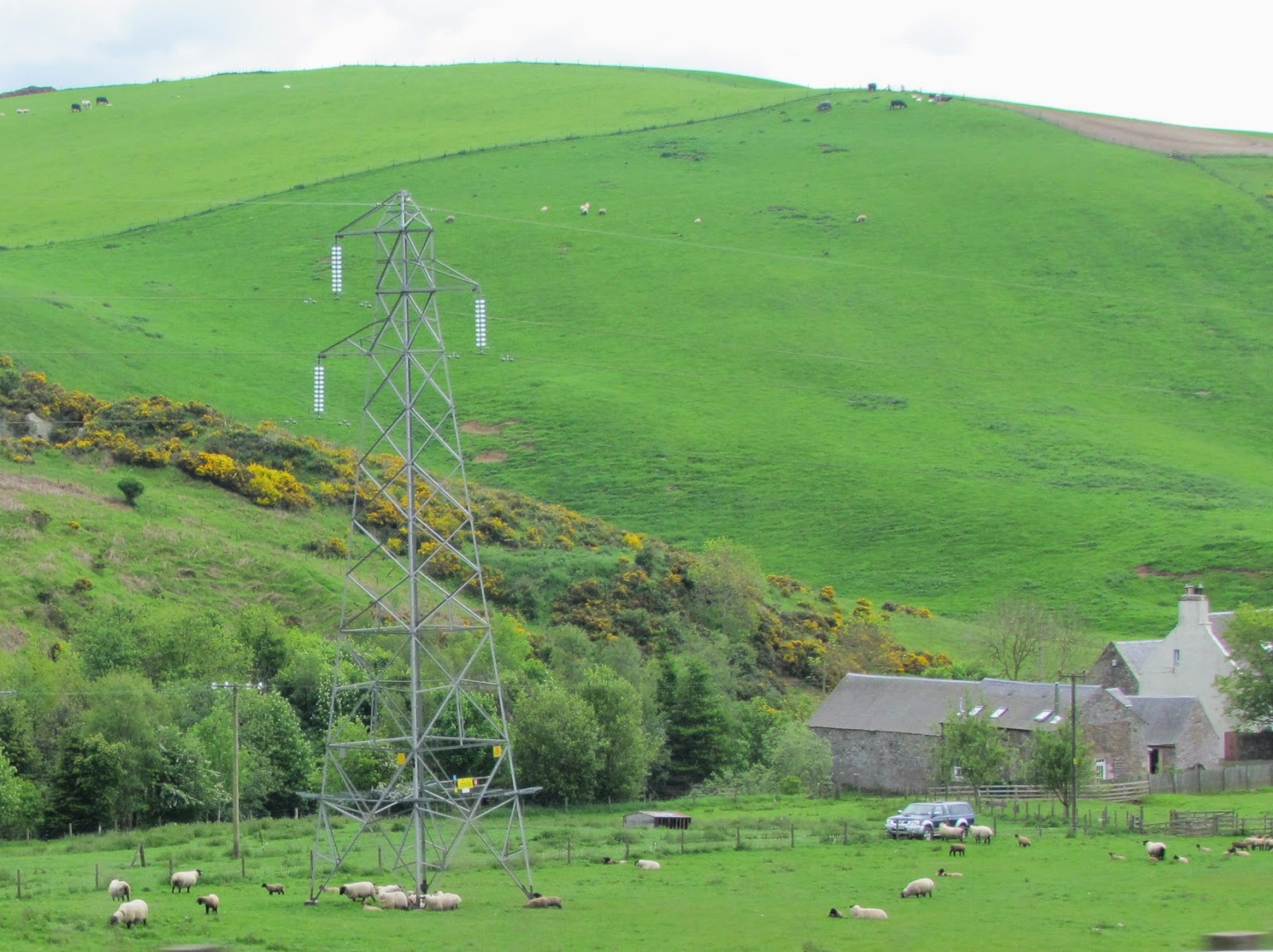 Then we reach Lauder, a small market town with pleasant old buildings. Not long now.

The may was out as it should be, for it was May after all. Hedgerows of hawthorn bushes in full flower lined the road. 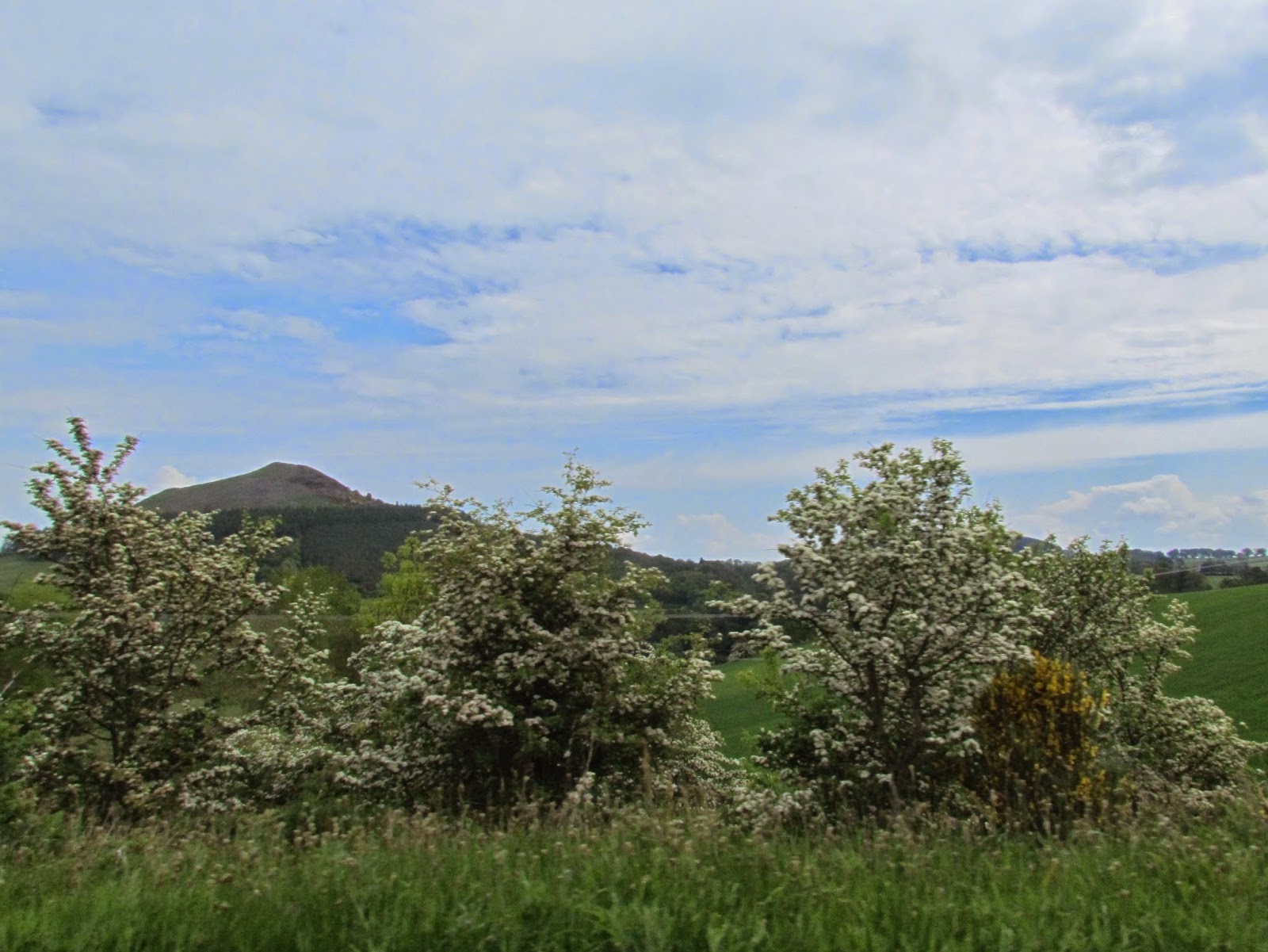 And then we reached Jedburgh. 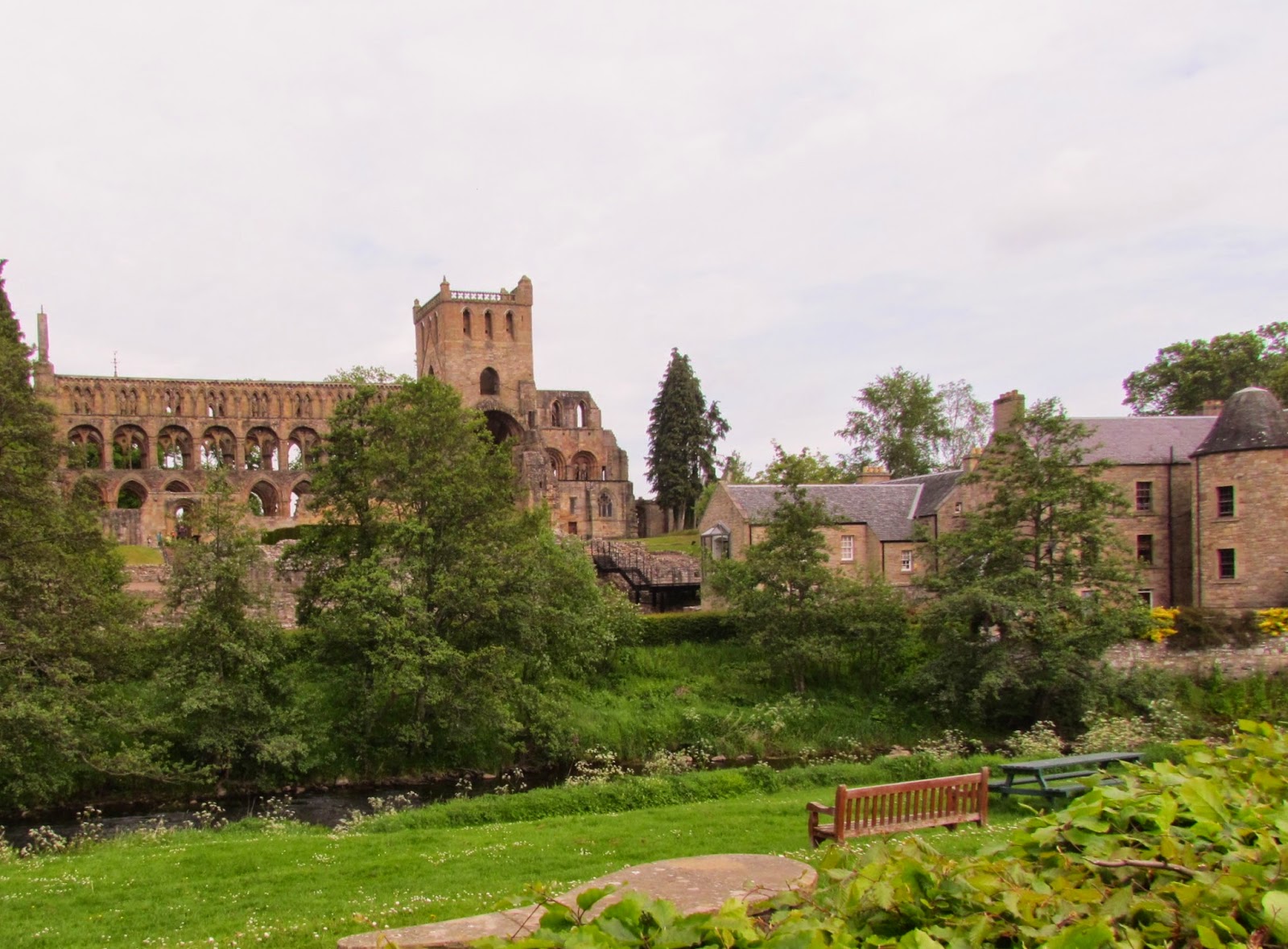 As is right, the first thing you see on parking your car, is the magnificent Abbey, and so you should for that is what Jedburgh is famous for.

However, we'll get to the Abbey in a minute. First, a slight diversion.

On the other side of the car park is an information board about James Hutton who died in 1797, two years after the publication of his book Theory of the Earth. In this book he expounded his view, based upon the vertical and horizontal rock formations on his land, that these layers were caused by earth movements over many thousands of years, a revolutionary idea at a time. You are not able to go and see the rock formations, but the council has helpfully erected a rock structure to demonstrate what he discovered. 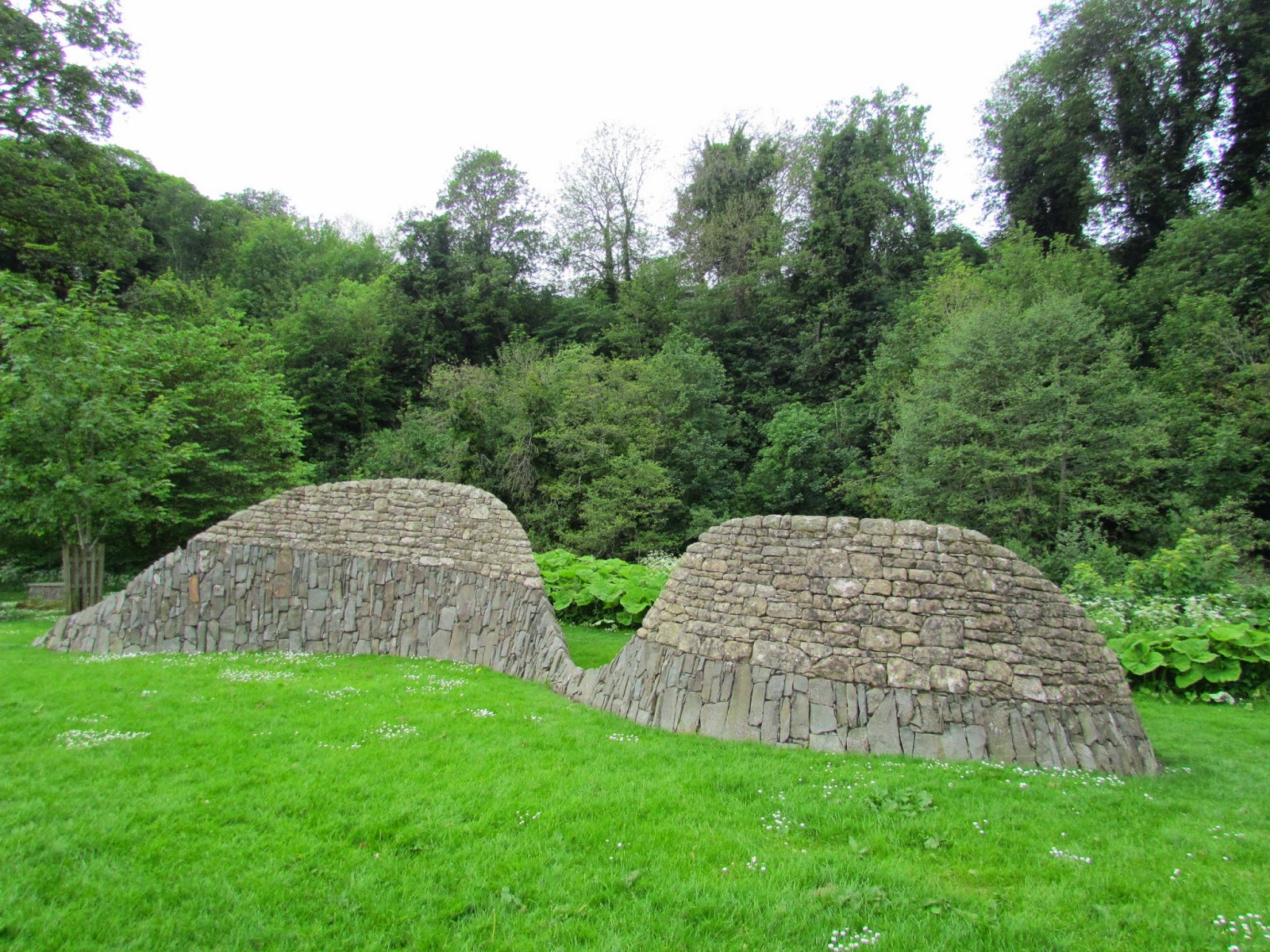 Yes, they do look like a pair of breasts.

But what about the Abbey which you came all this way to see?

As you approach it, you see what a well chosen site it was built on, overlooking the River Jed. 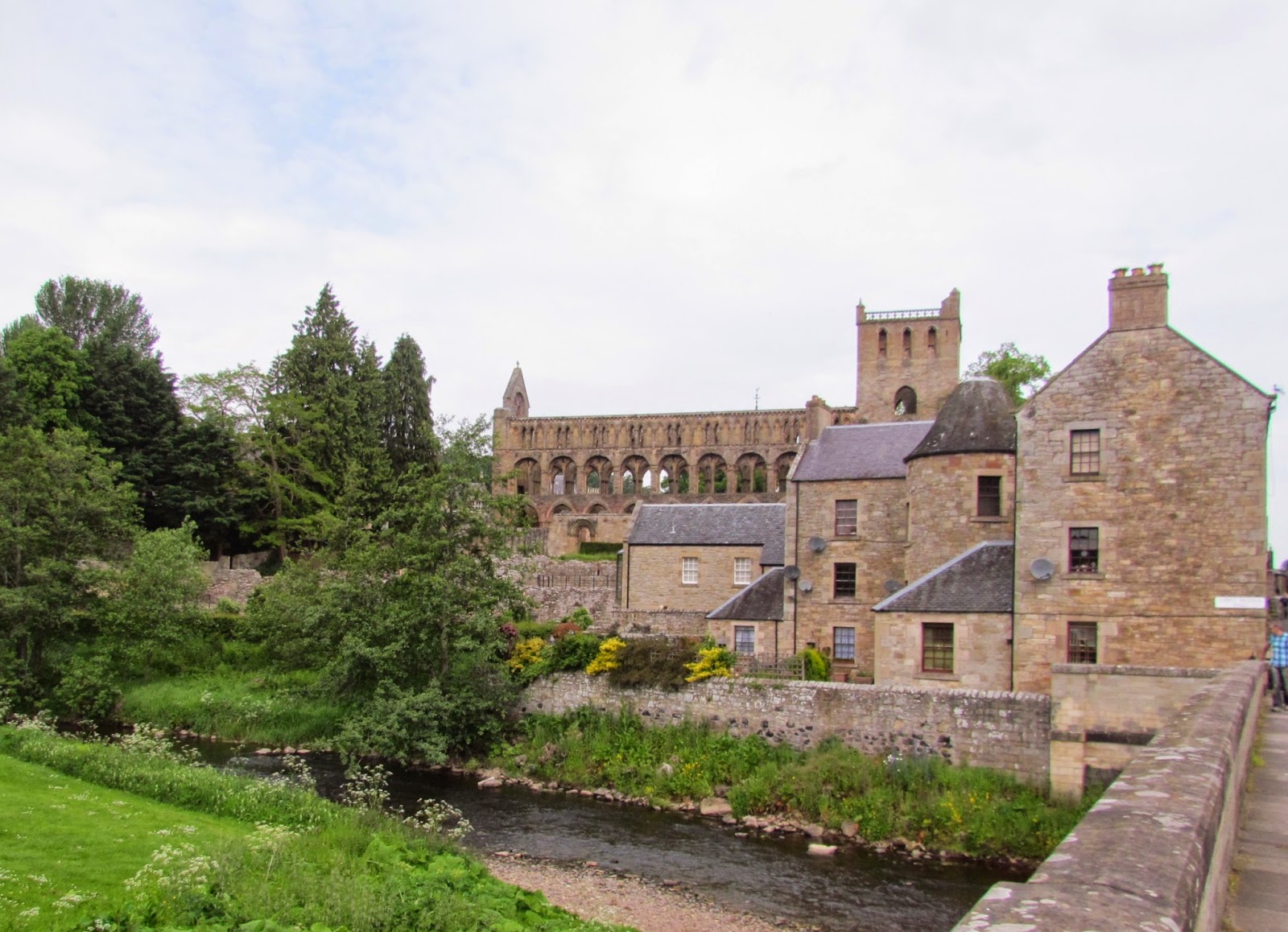 The monks were not the first to settle there, however. The site has been occupied at least since the 9th or 10th century, as this roughly carved crucifix and other more intricate carvings suggest. 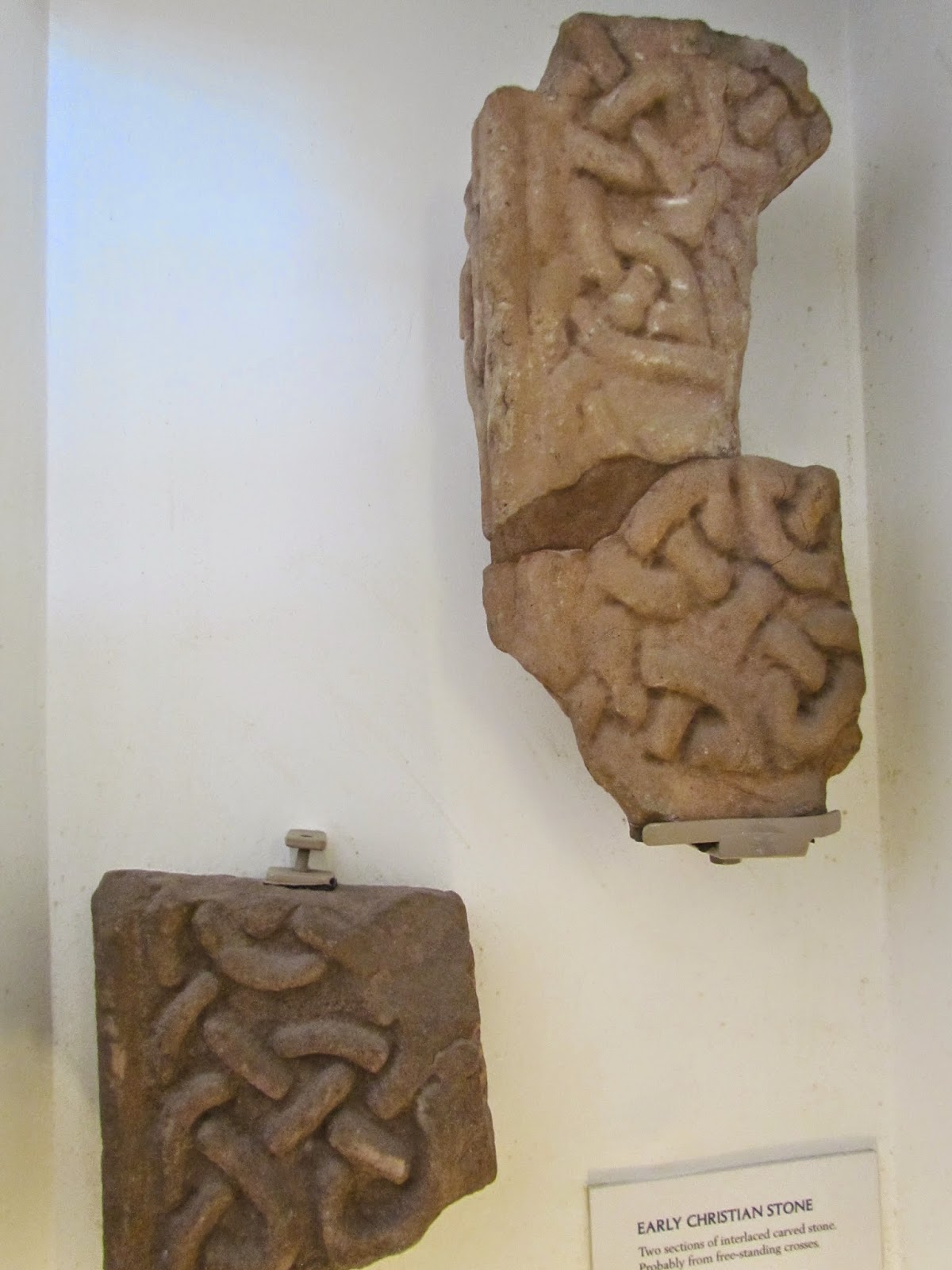 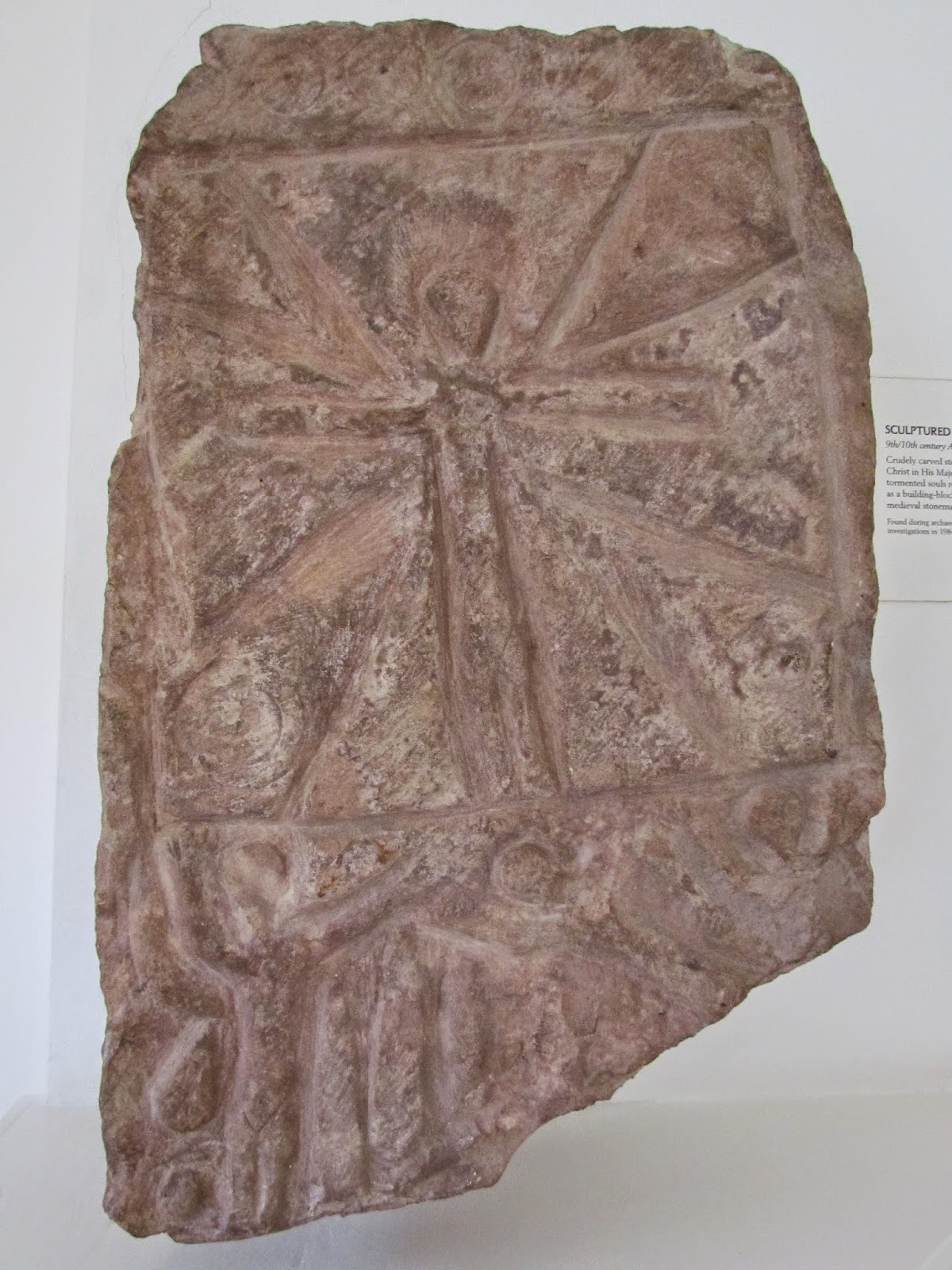 From even earlier come some stunning fragments of a shrine designed to hold the body of a saint. I love the delicacy of the intertwining tendrils and the little mice and birds peeping through and nibbling at the fruit. 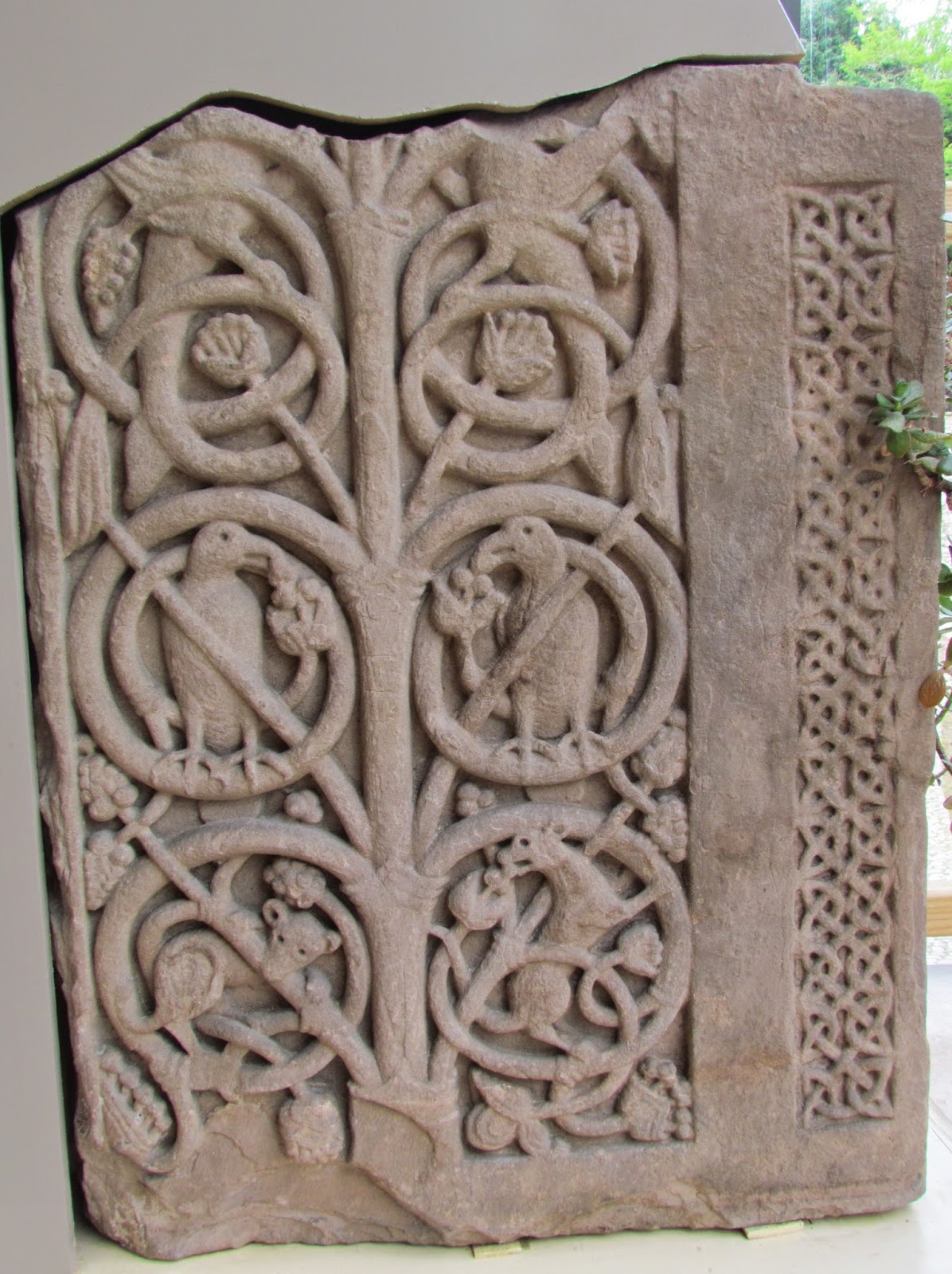 It was a couple of centuries after this period that the abbey itself was founded by King David I and Bishop John of Glasgow, who used to be his tutor. The first monks, Augustinians, probably came from France but the abbey grew to become one of the most important and richest foundations in Scotland. The magnificent three-tier nave is an indication of the resources available and the abbey's ability to employ highly skilled architects and builders. 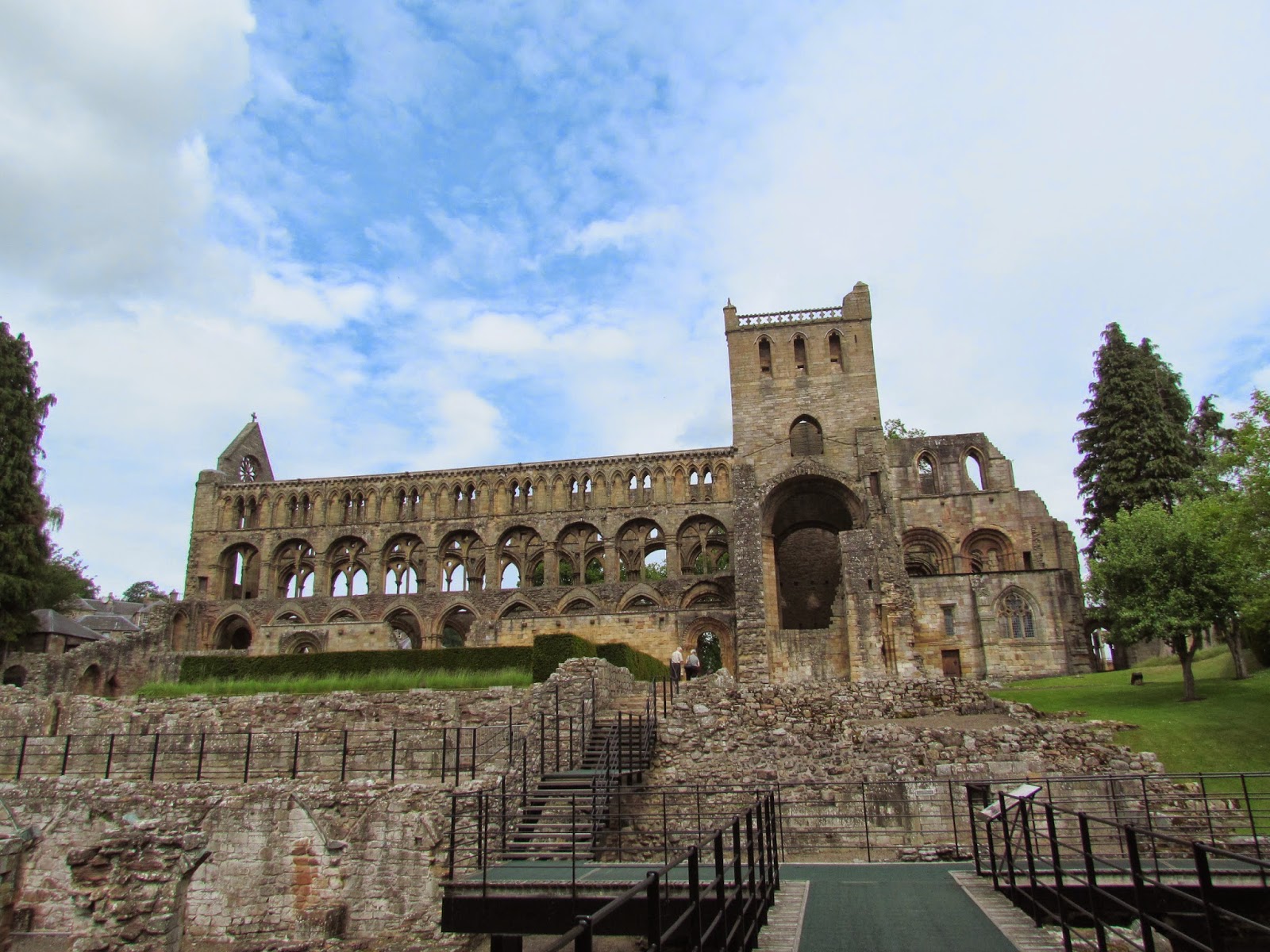 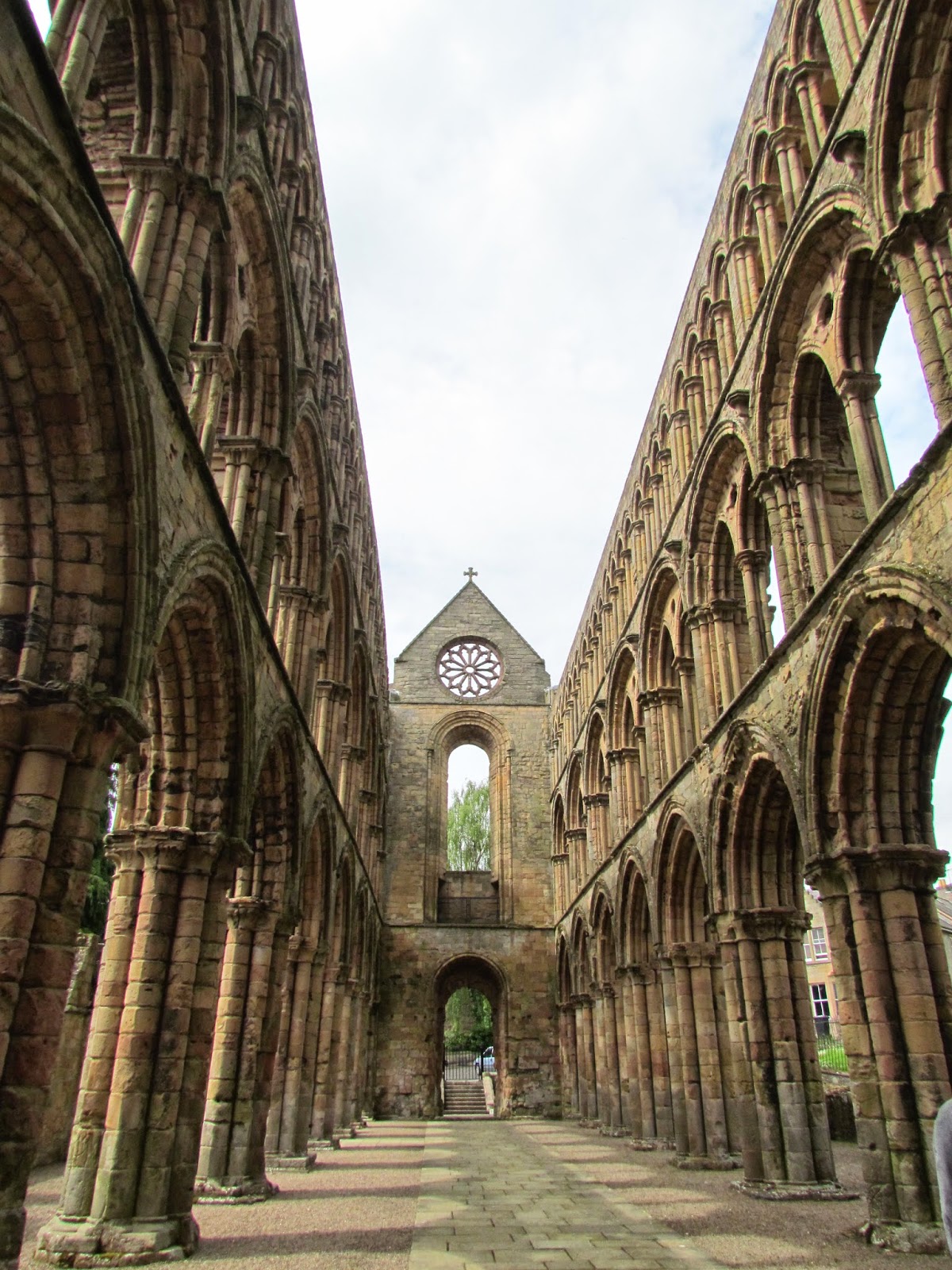 However, Jedburgh's geographical position on the border between Scotland and England meant that it was also extremely vulnerable to attack. In the sixteenth century it was sacked several times, including during the Rough Wooing. It eventually closed after the the Reformation took hold of Scotland. By that time, in the 1560s, only a handful of monks remained. However, despite the building's gradual collapse into ruin, lovely details remain such as the East Processional doorway below. 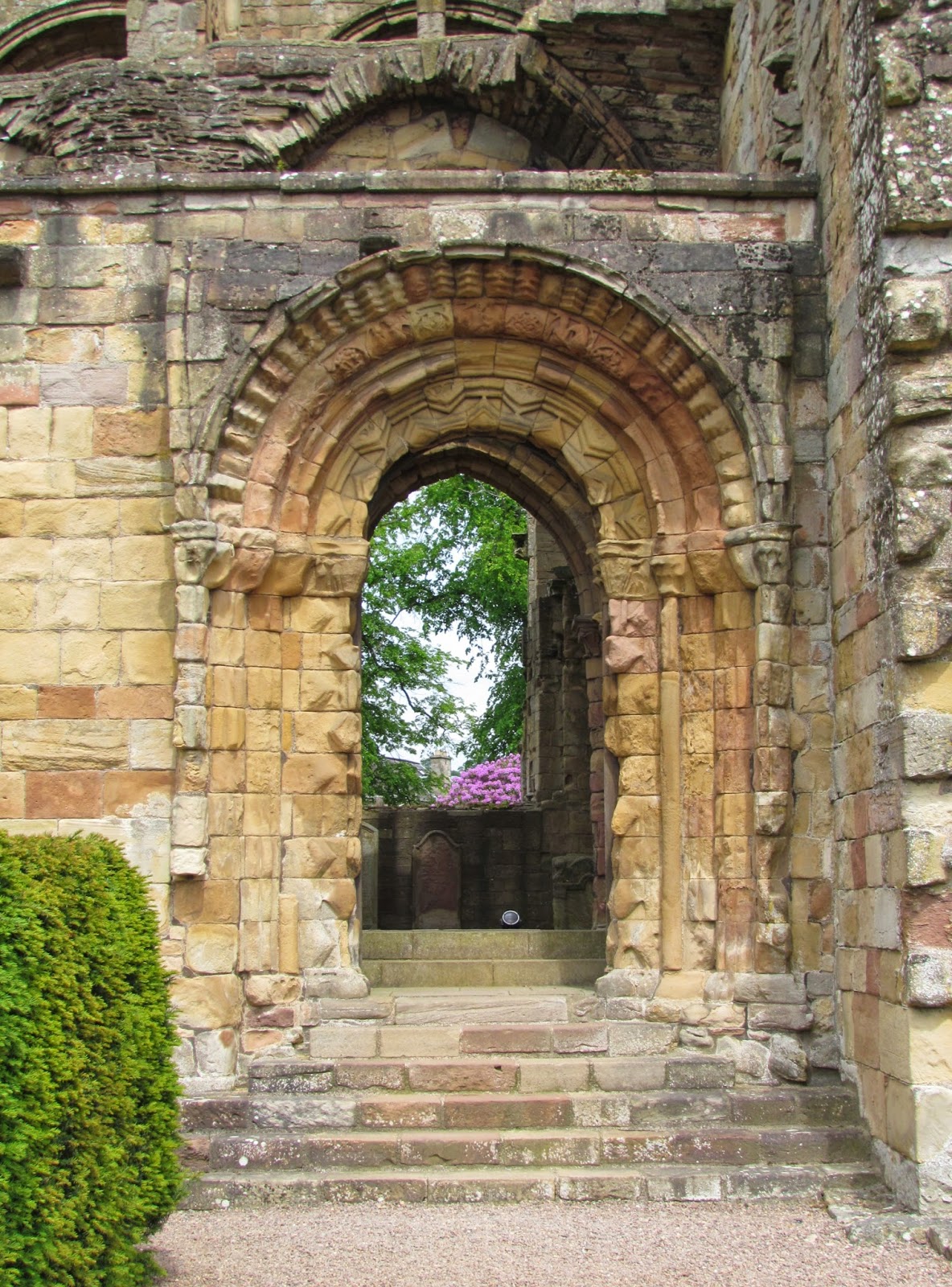 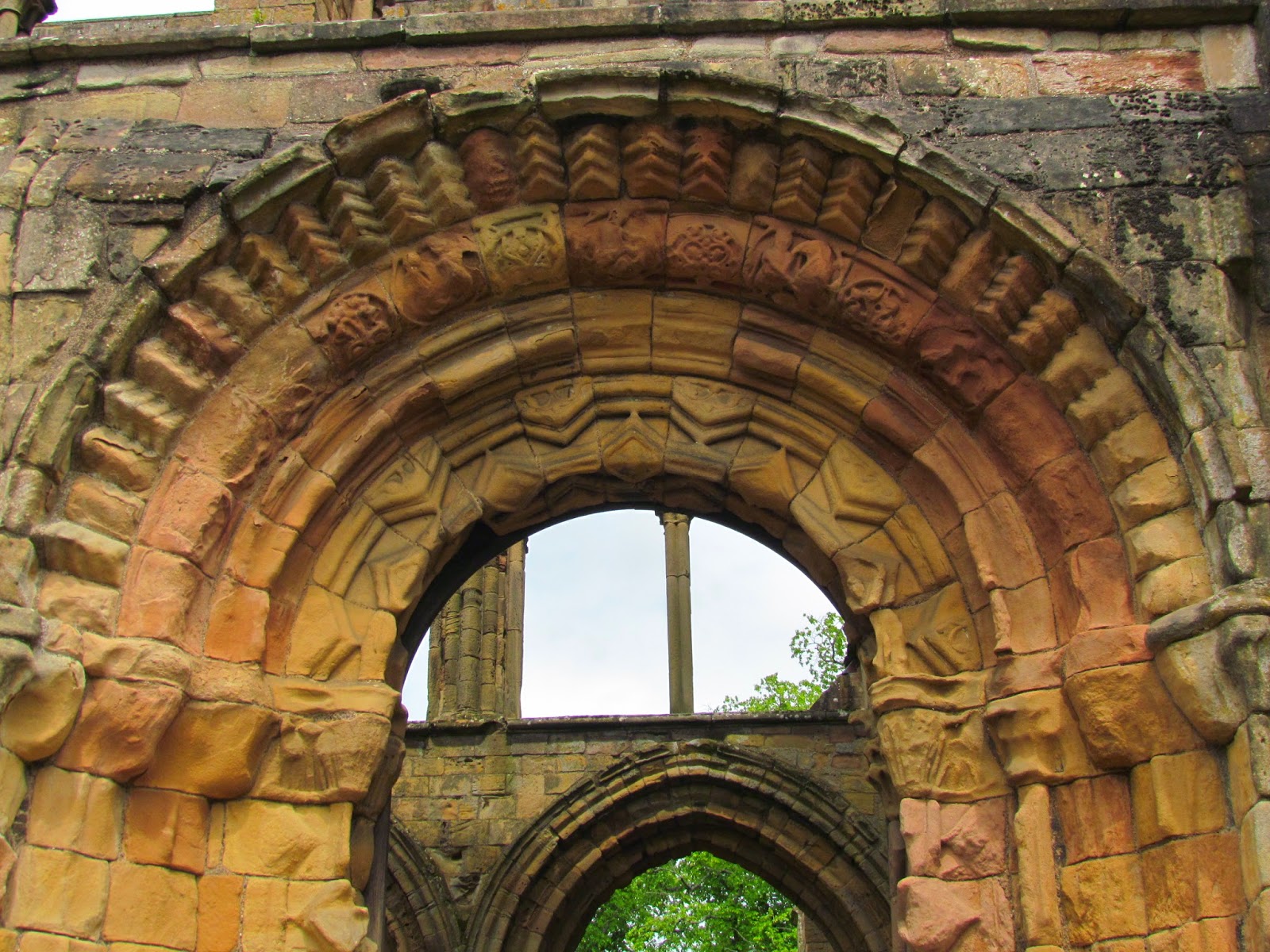 Beautifully-executed  stonework such as this grand tomb draw the eye to the detail of the lacy frieze at the top level. 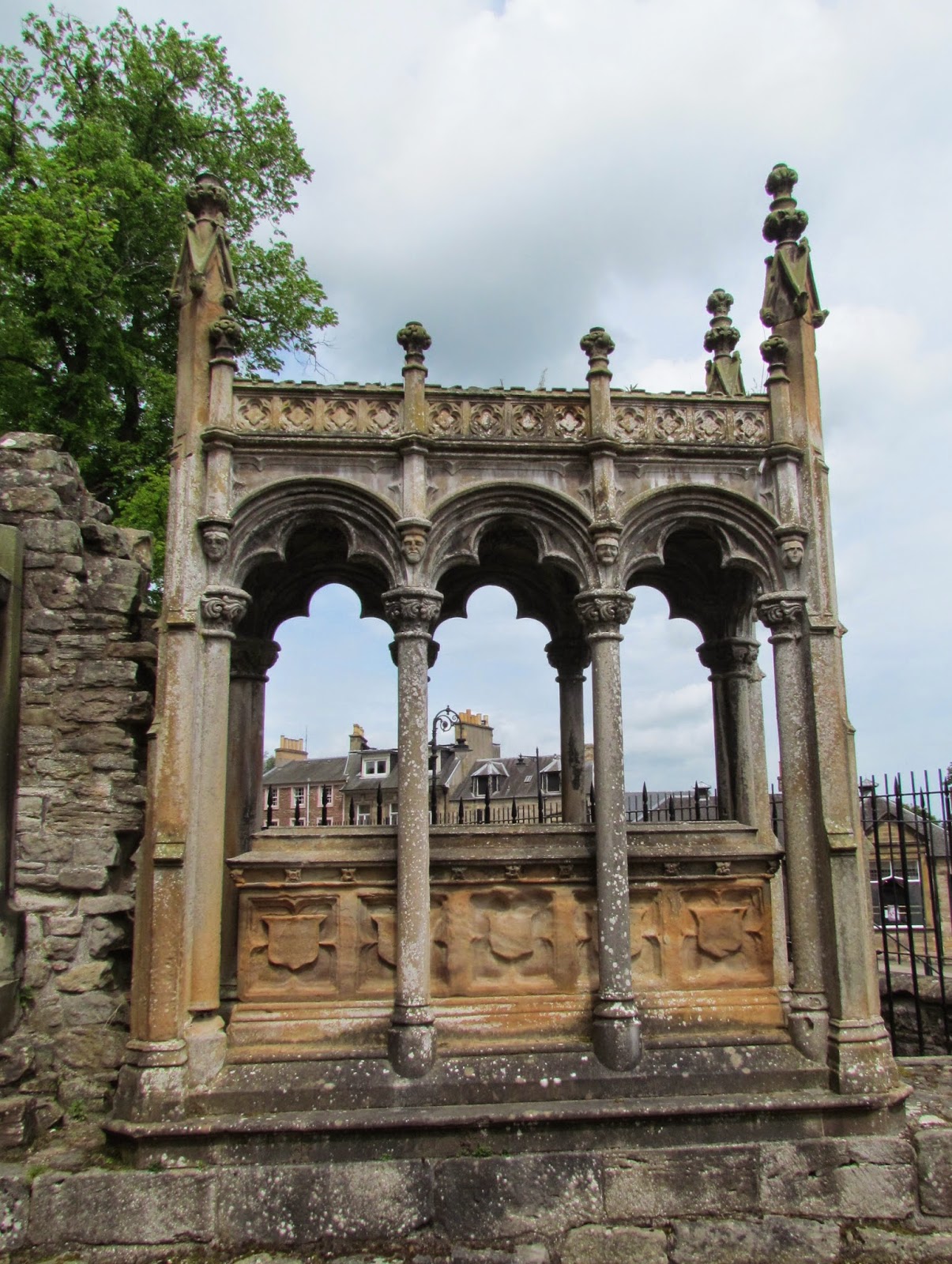 Here you can see clearly the different stages in which the abbey church was built, each age choosing the style of arch which was most up to date at the time. As in many church buildings, old stones are reused, regardless of their apparently 'pagan' origins. Sometimes these stones go back centuries before the establishment of the abbey itself, such as this Roman altar stone which has been built into a staircase. For Jedburgh was Border territory during the times of the Romans. Spare a thought for those cold continental soldiers shivering on Hadrian's Wall half a dozen miles south. 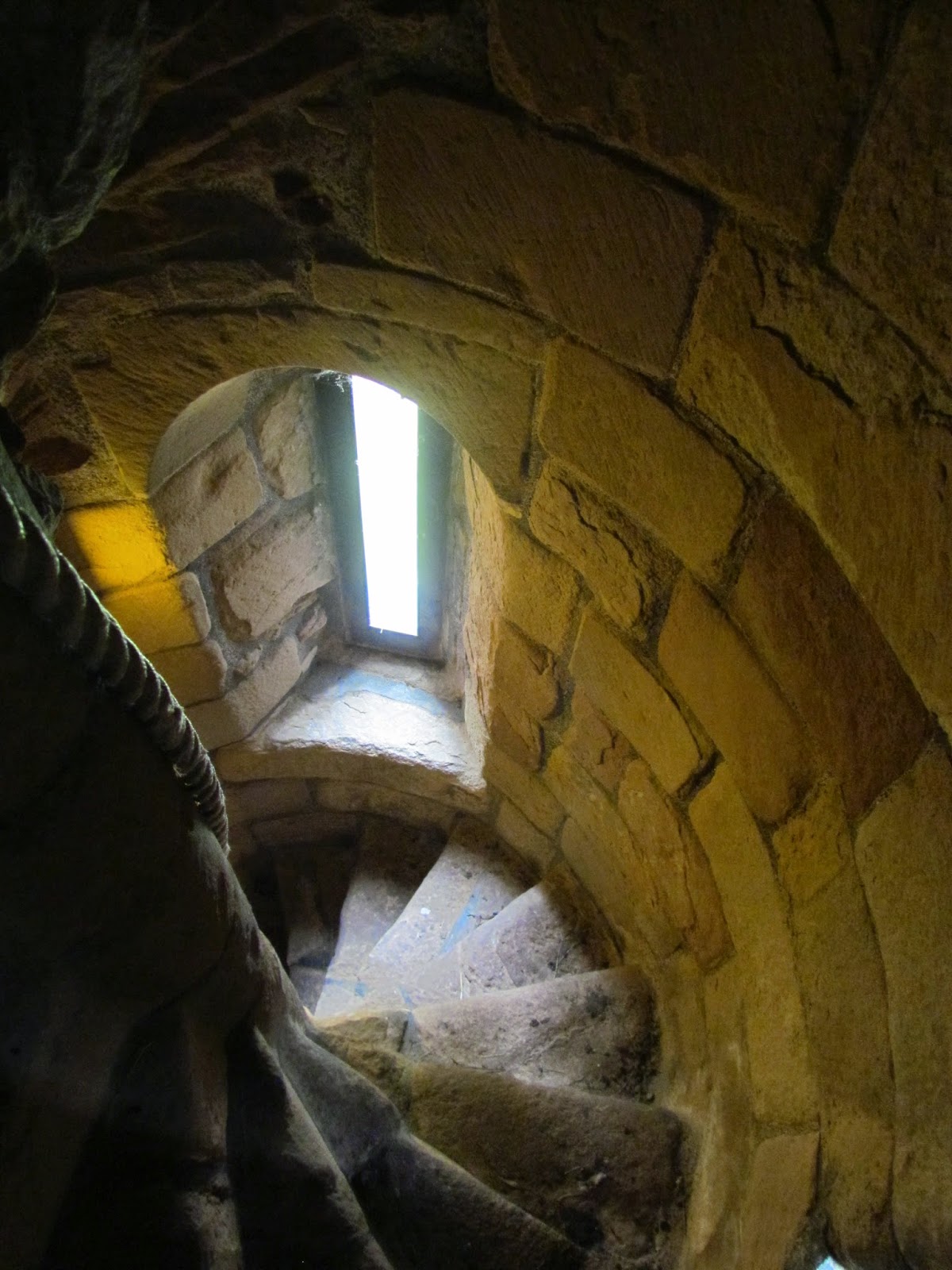 After the Reformation, the east end of the church was retained as the town's parish church, though it continued to deteriorate. 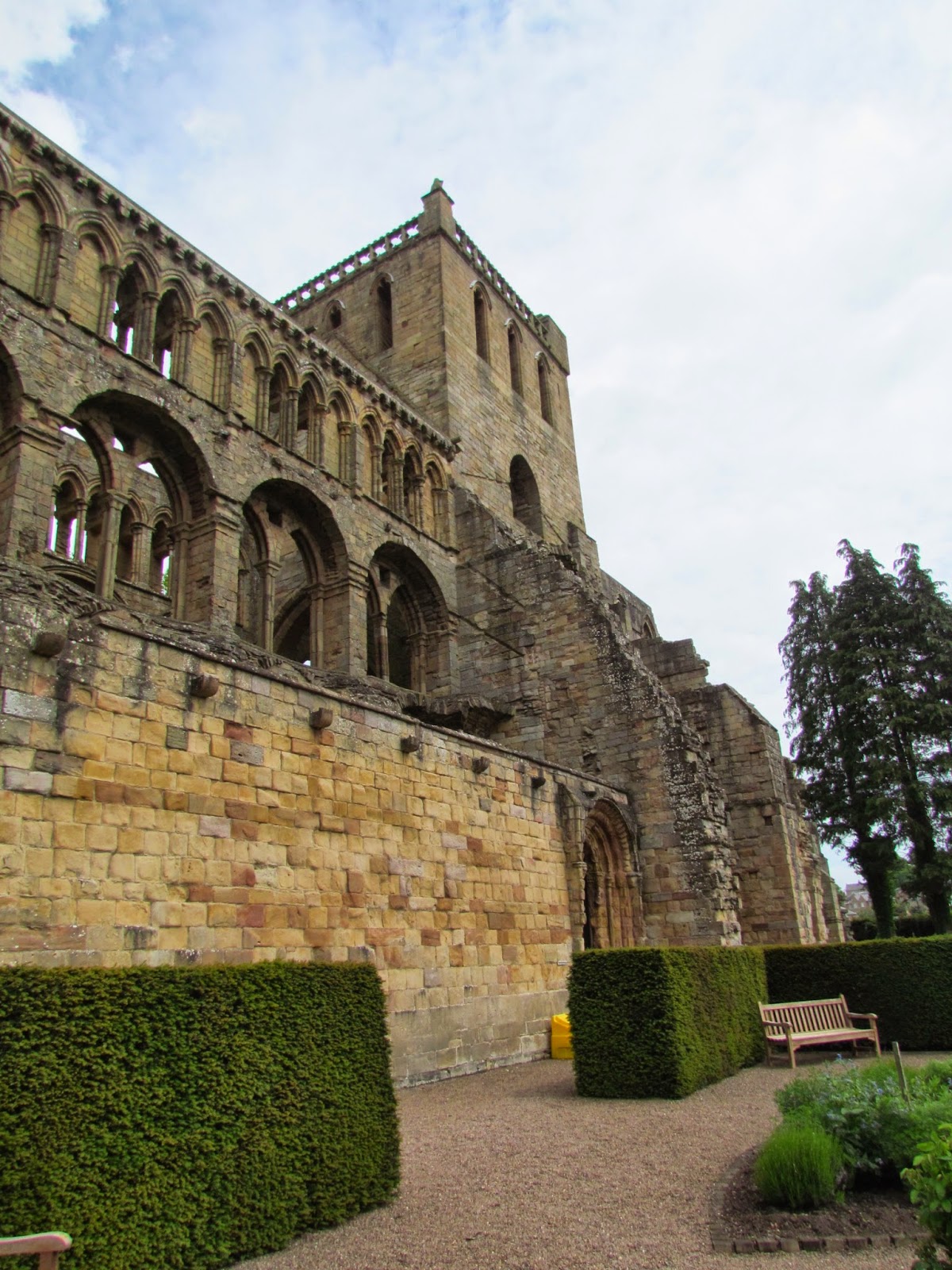 Over the centuries, the townsfolk made it their own, with more recent memorials joining the medieval coffins in the choir and sanctuary. 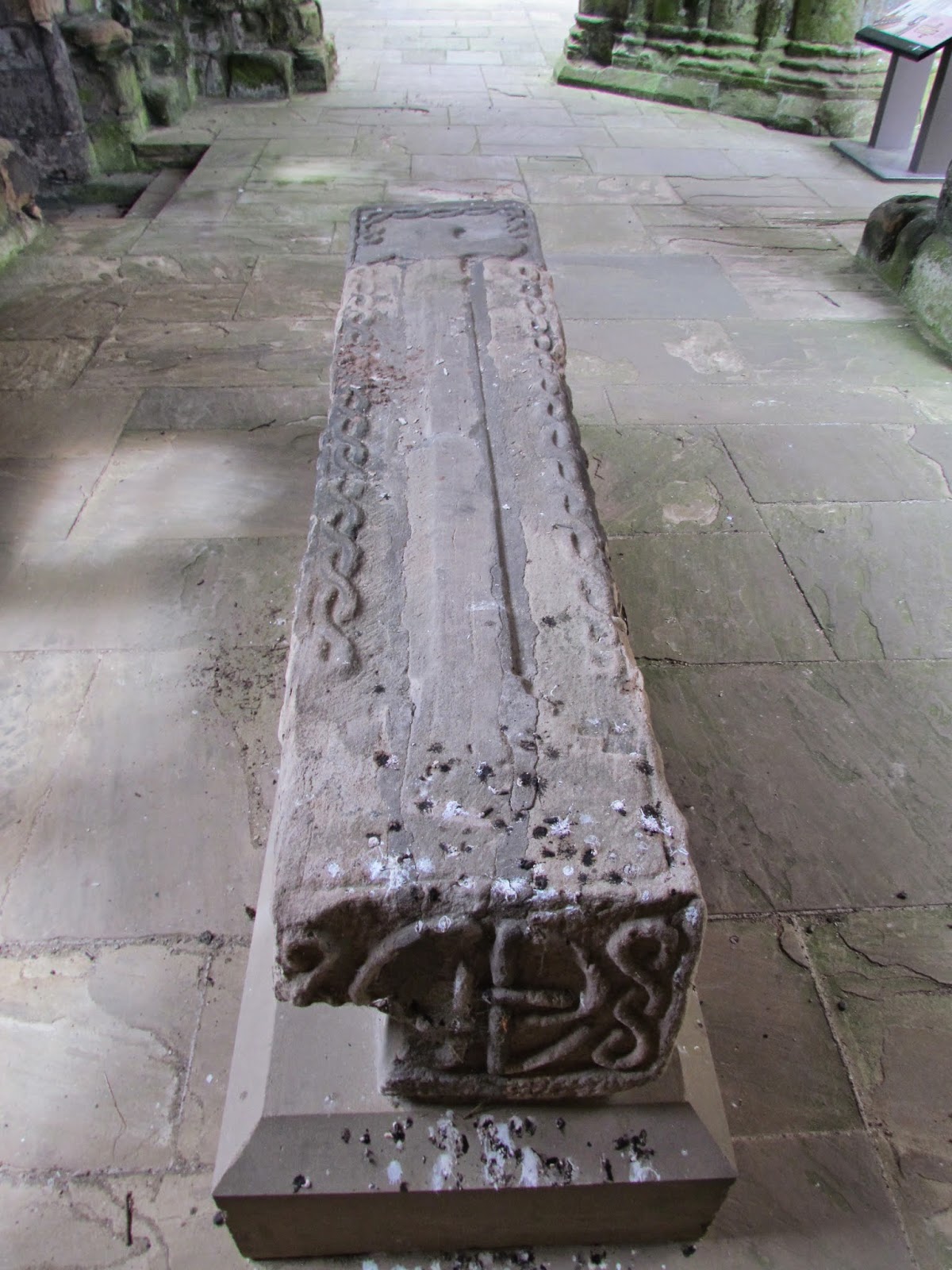 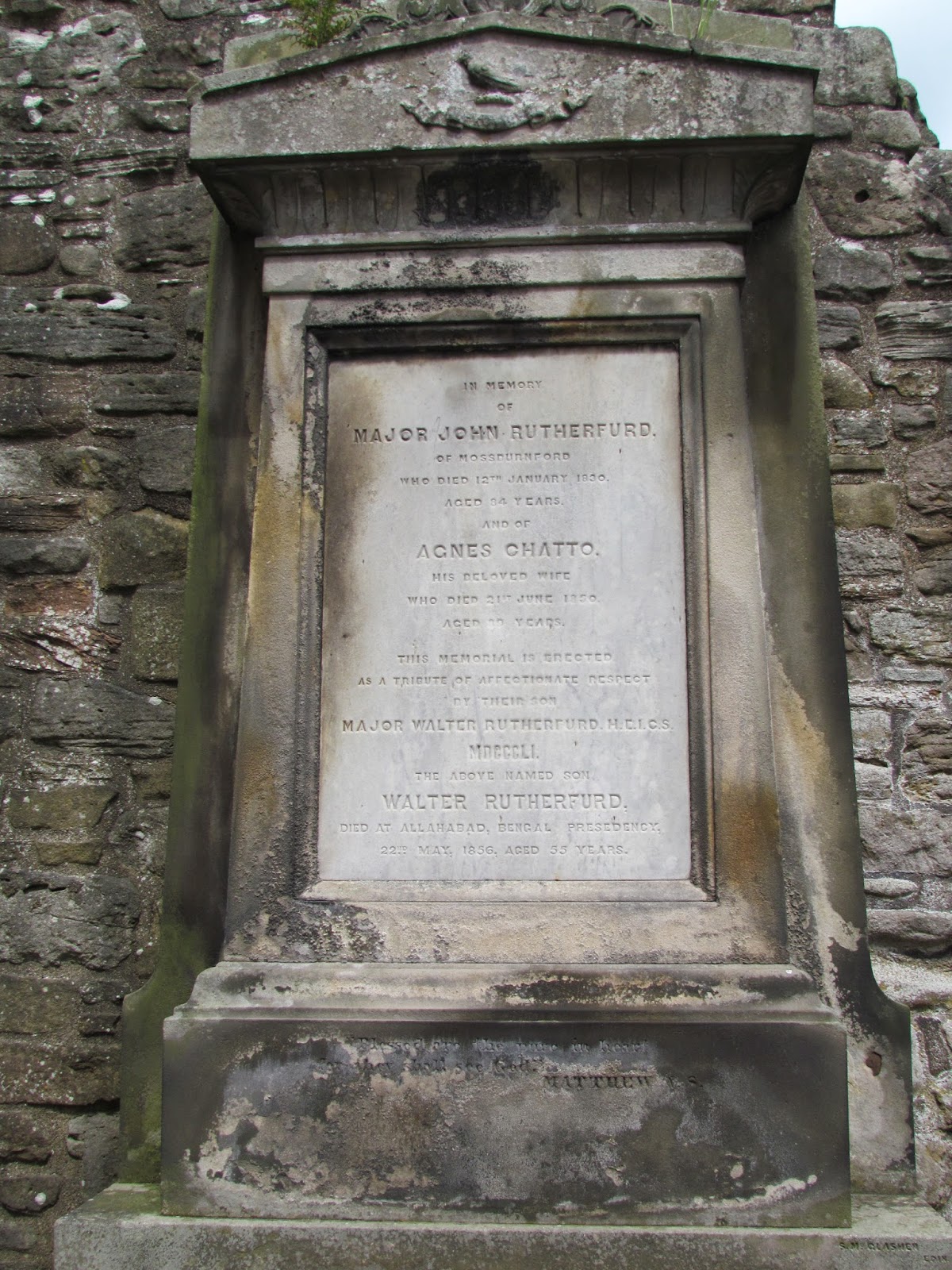 In the nineteenth century, the abbey was finally abandoned as a place of worship and was replaced by a new parish church across the road. 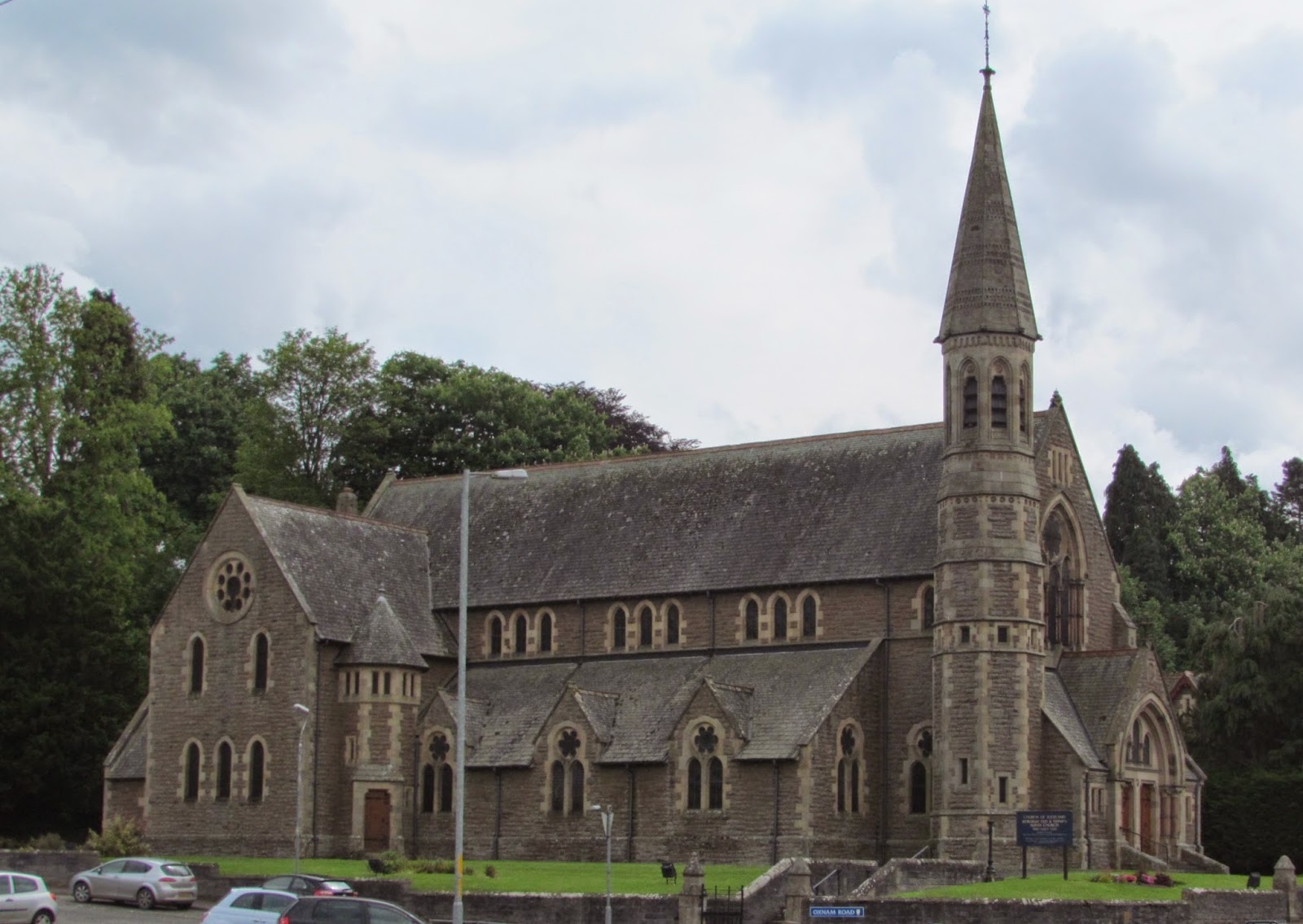 Around the abbey the town continued to grow. The town has its own Canongate, where the monks used to walk. Pleasant market town architecture grew up, banks and coaching houses, the latter these days serving  excellent lunches.


The abbey site itself has continued to develop over the years as excavations continued, with the abbey's domestic buildings only being uncovered relatively recently. 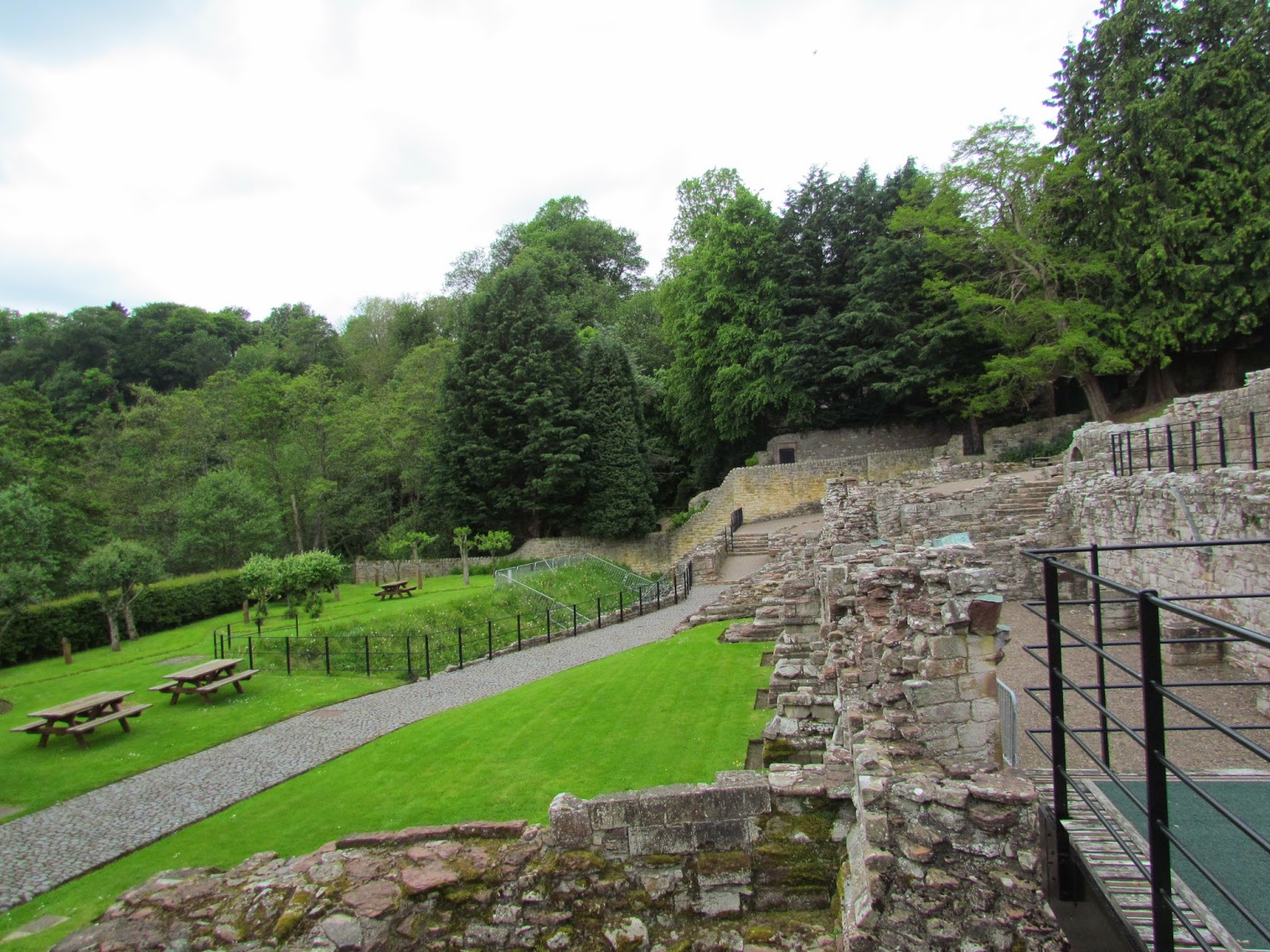 Also rediscovered at the time were fascinating reminders of life in earlier centuries, such as this game of Nine Men's Morris. 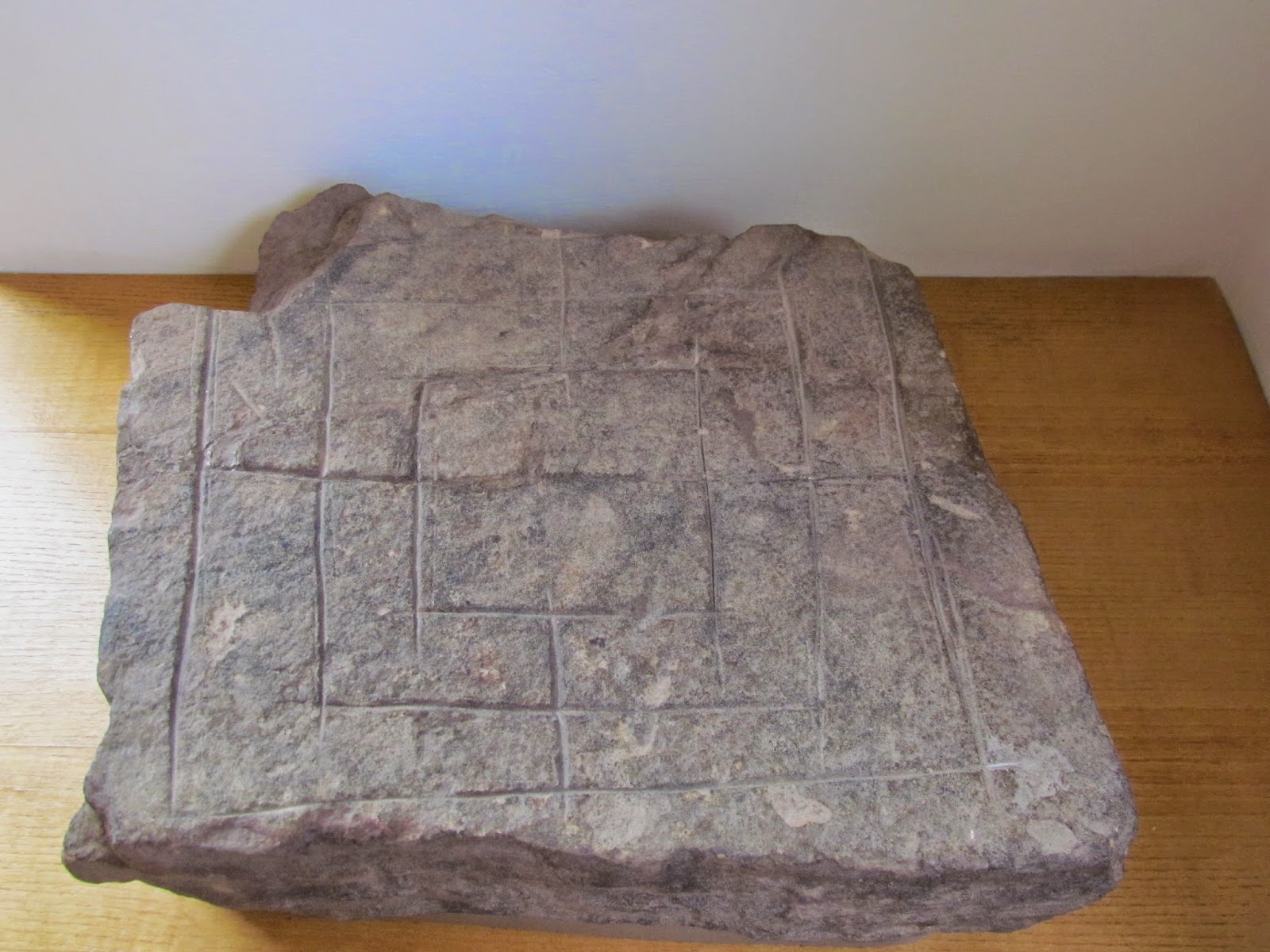 We have visited this great abbey many times and never fail to discover yet more treasures. Jedburgh may just be an hour or so from Edinburgh but it is almost another world: wild Borders territory far from the douce respectability of the capital city.
Posted by Elisabeth Ritchie at 19:03