A day out from London: Eltham Palace, a Royal hall for the nouveau riche

Eltham Palace sounds very grand and very royal. Well, it certainly is quite grand and, from my perspective anyway, the most interesting period of its history was distinctly royal. The Palace is also a building of startling contrasts. Indeed, the greatest surprise strikes one the minute one walks through the entrance hall.

One's first view of the Palace, however, is just what one would expect from an ancient royal palace. 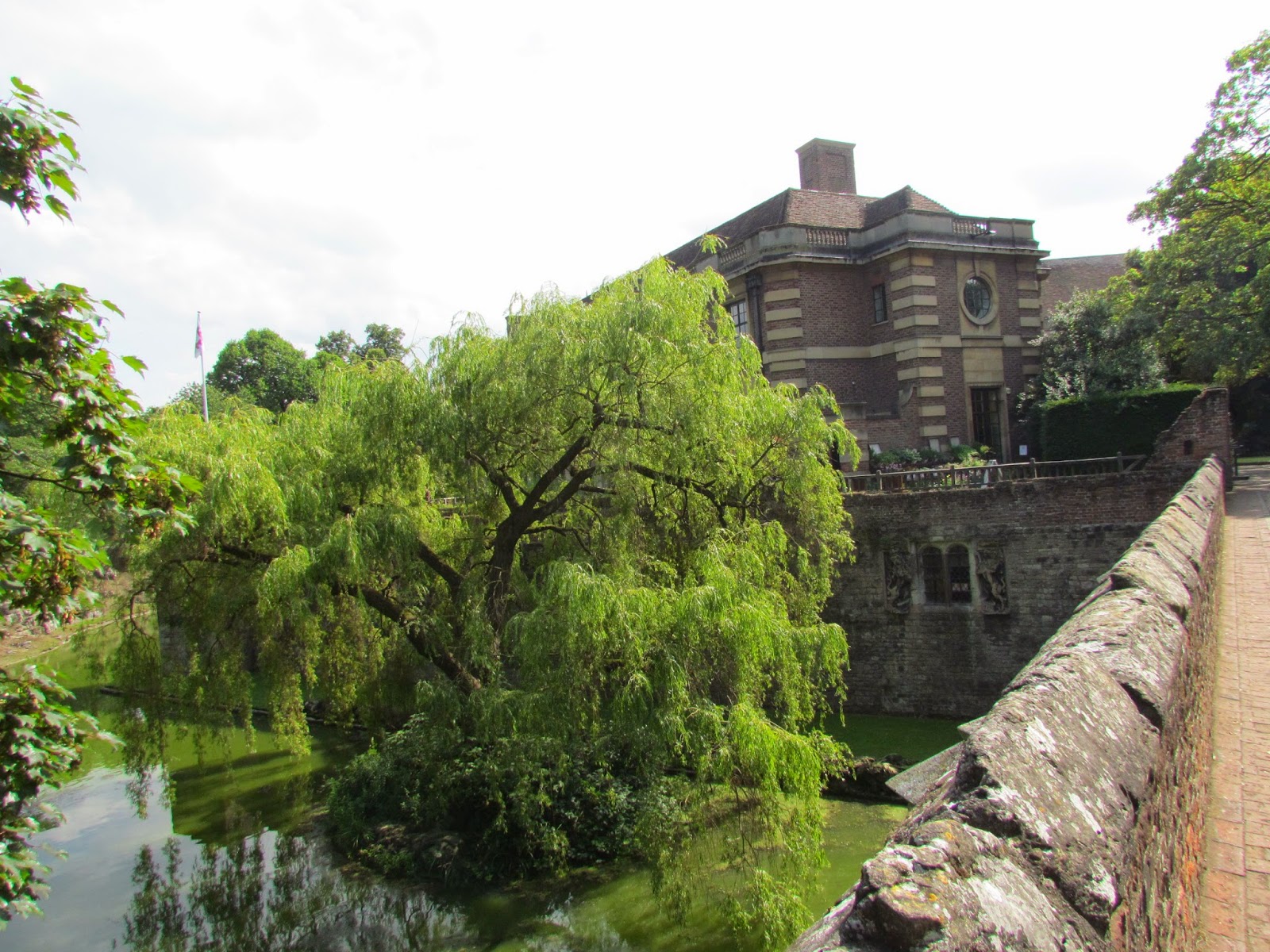 As you walk across the bridge, you see that down below lies the moat, its languid green depths looking particularly uninviting. despite the heat of the day. Ahead of you stands the Palace, from this view appearing similar to what you would expect of a grand Tudor house. In fact, the building originally went back to mediaeval times, acquired by Edward I for his wife. Edward IV built the Great Hall in the fifteenth century, and that is now all that remains of the great palace which became the boyhood home of Henry VIII and his siblings.

As you turn the corner towards the formal entrance, you catch a glimpse of the Great Hall out of the corner of your eye. 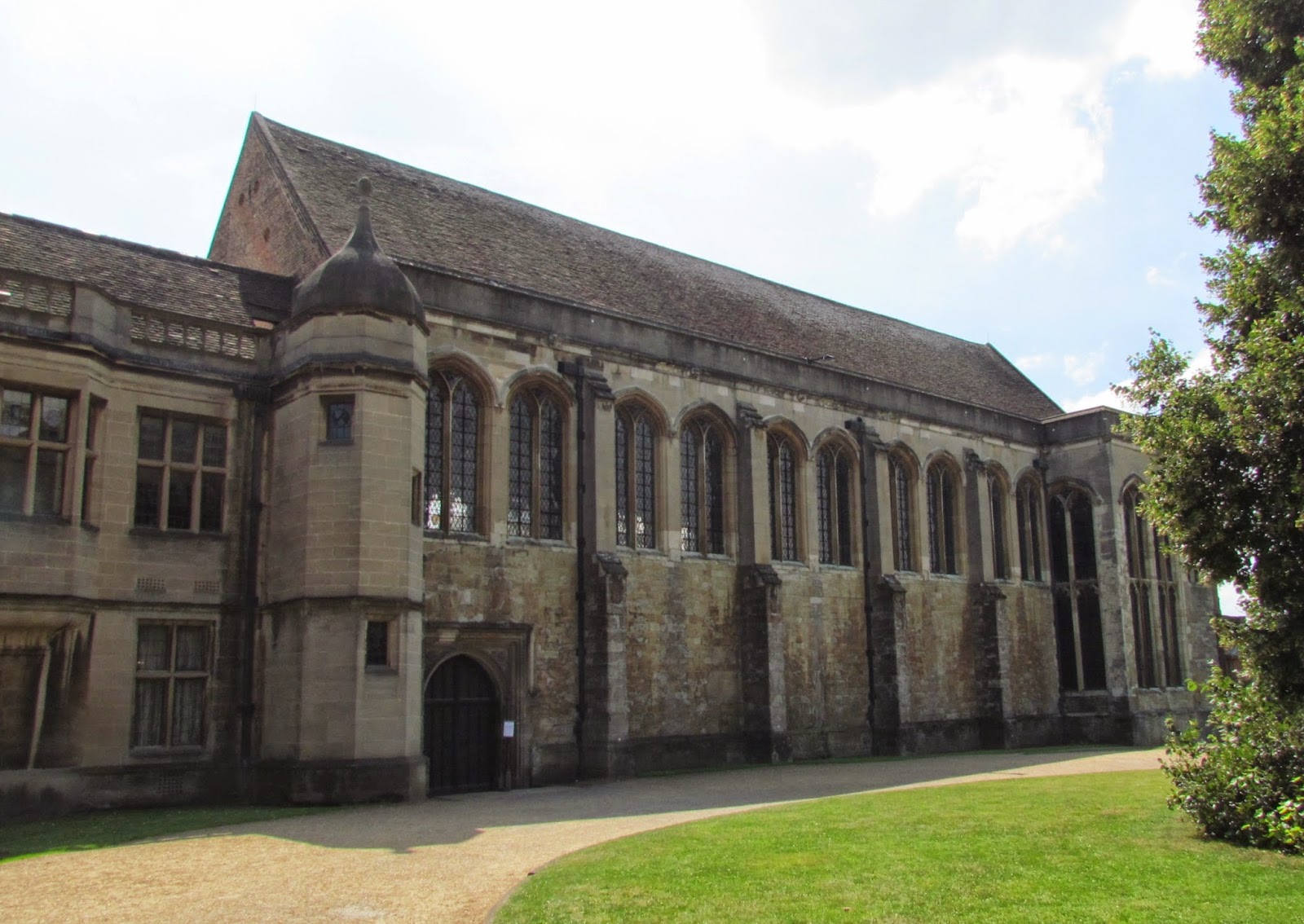 However, first you go through the impressive entrance hall. 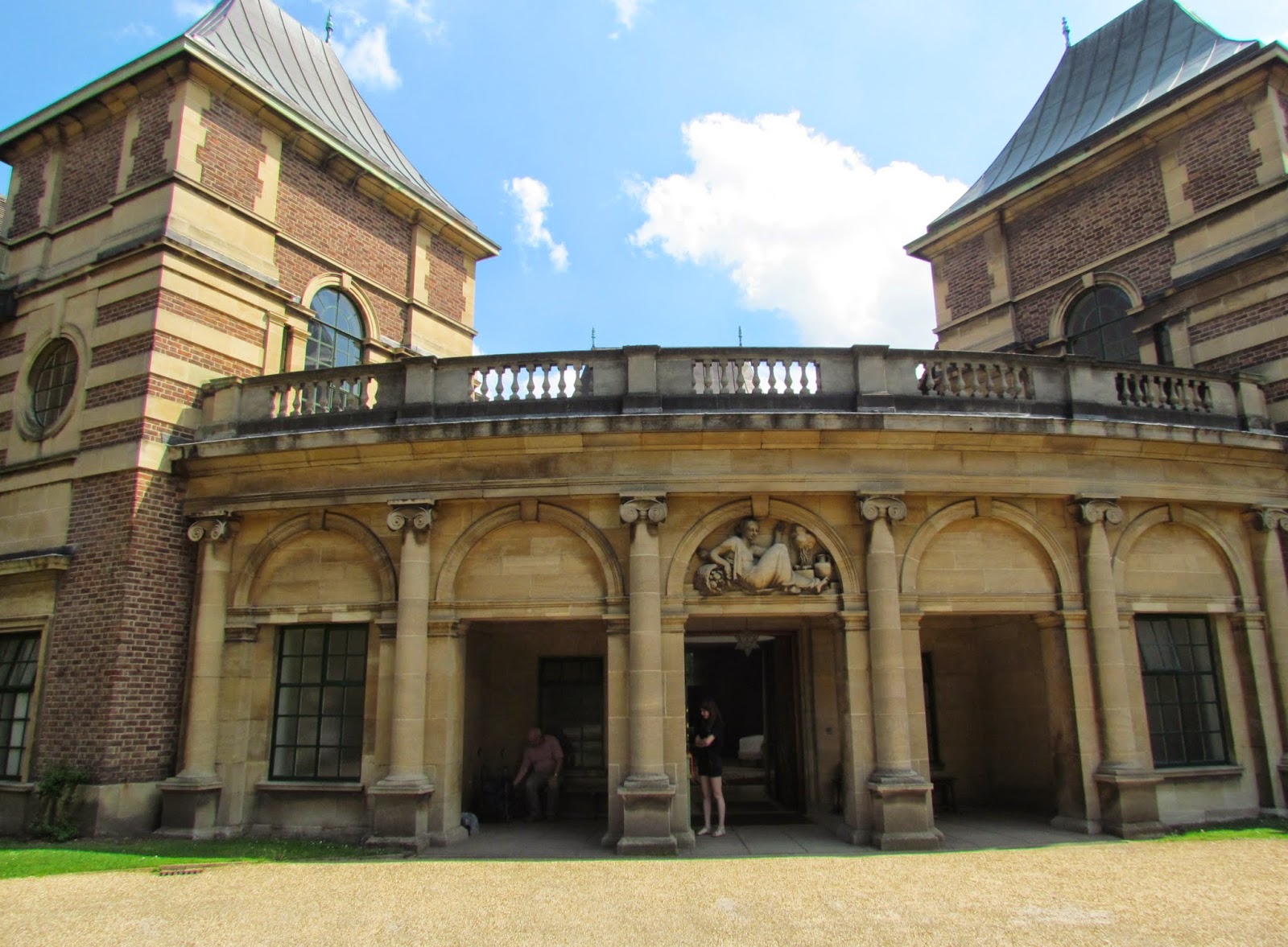 What a shock! Instead of a palace, you find you are walking through what looks like a suburban 1930s sitting room. The large round space is occupied by Scandinavian furniture, familiar enough to us today but quite strikingly modern back then. Curving stairs rise on each side. Follow them and you are taken through comfortable room after comfortable room filled with plush expensive furniture and tasteful artistic objects. [I couldn't take any photographs as it is not allowed.]

The house adjoining the Great Hall was lived in by the Courtauld family. We have them to thank for the fact that we can now wander round and see how the uber-rich used to live - and still do, no doubt. You can watch their antics and those of their fortunate guests on home film and marvel at how far removed their lives were from those of their contemporaries during the nineteen thirties.

During the war, the house was taken over for use as a hospital and, to be fair, members of the family did their patriotic duty in various ways. In 1950, the family set off for Southern Rhodesia, where, under its restrictive colour bar, they would be able to continue to live lives of great privilege and luxury. Dull post-war Britain was no longer the kind of place for such obvious distinctions of social class. Still, the Courtaulds left their home for ordinary people to enjoy and for this we must thank them. And visiting it is indeed an enjoyable experience. After the visitor has got over the surprising lack of any evidence that this was once a palace for one of the most famous royal families in England, you find the twentieth century building mildly interesting. This is how the very rich lived in the 1930s, among their rather dull though expensive furniture and with their bathrooms inlaid with semi-precious stones.

The remains of the Great Hall still astonish, however, Looking down from the 'minstrels' gallery', it is its size that at first astounds. The fact that the Courtaulds used the hall as a kind of overflow sitting room is also astonishing! Although the gallery itself was a twentieth century addition, the hall is still spectacular. The huge beams of its wooden roof curve high above the floor.

However, much of the pleasure the visitor receives from visiting Eltham Palace comes from wandering round the formal gardens. 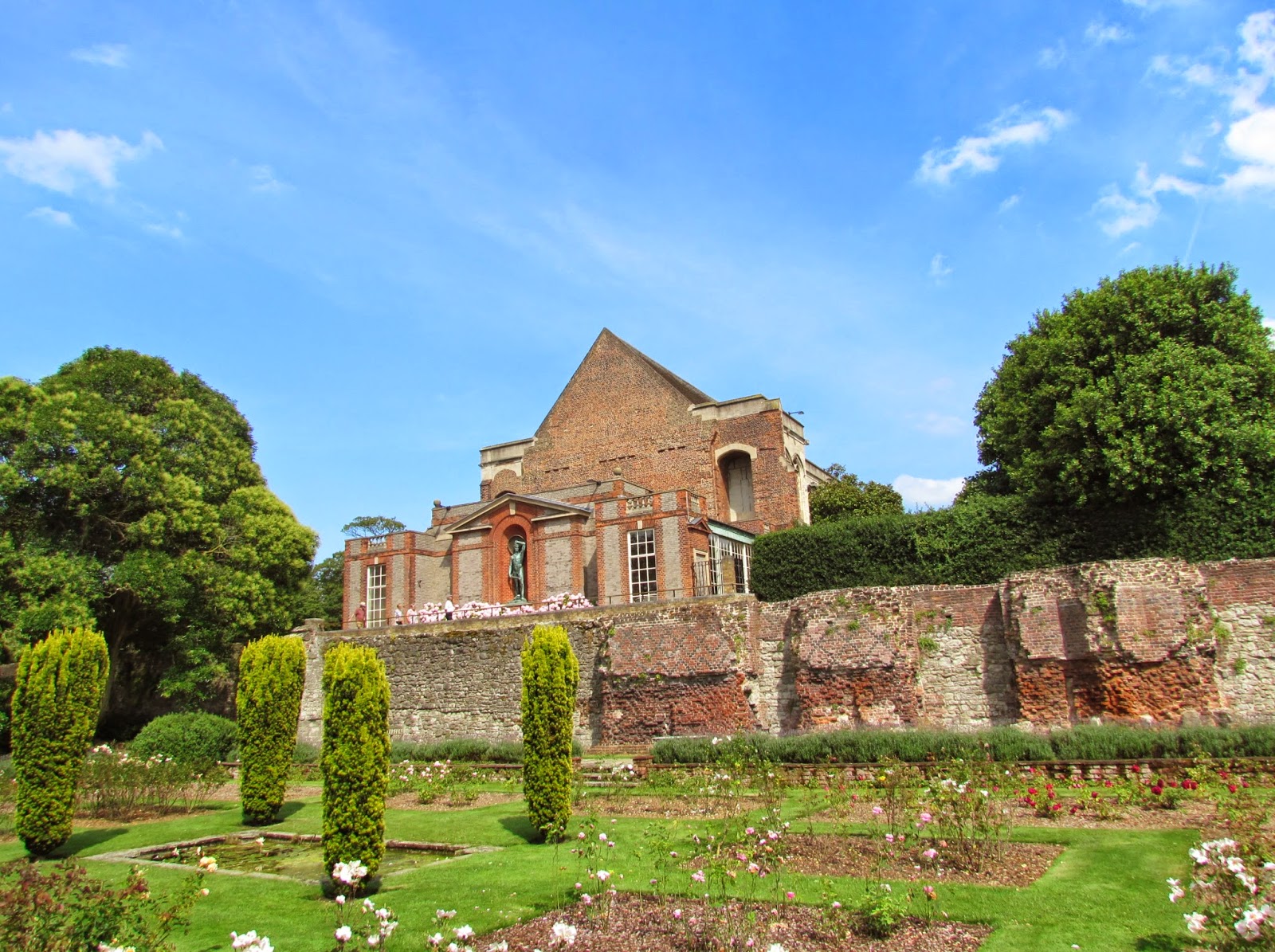 Above you can see the rear of the Great Hall, its wall acting as backdrop to an old-fashioned rose garden. 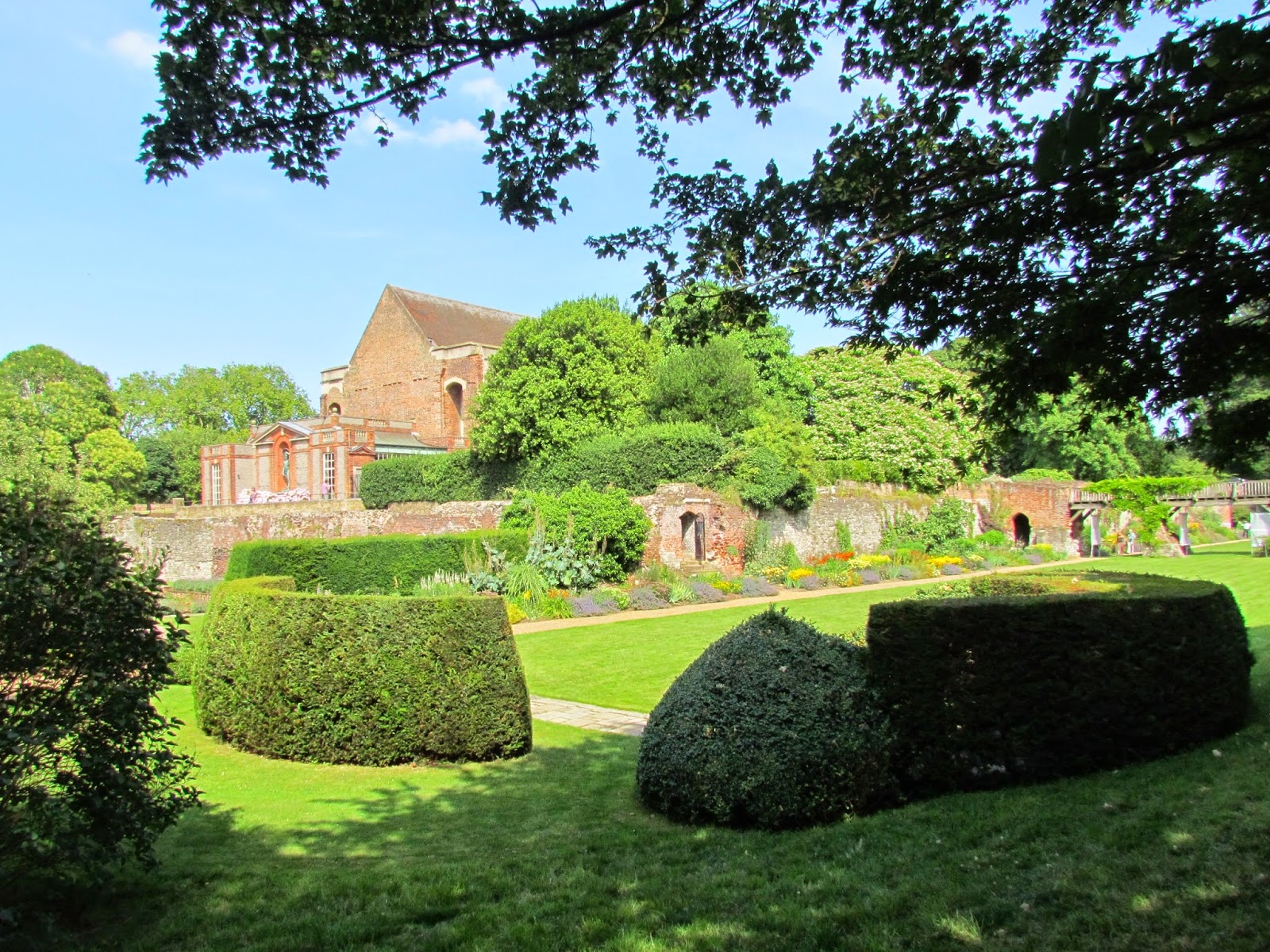 Relics of the old palace thread through the garden. Between the trees, vistas open out, the grand house peeping through the foliage and intriguing the eye. 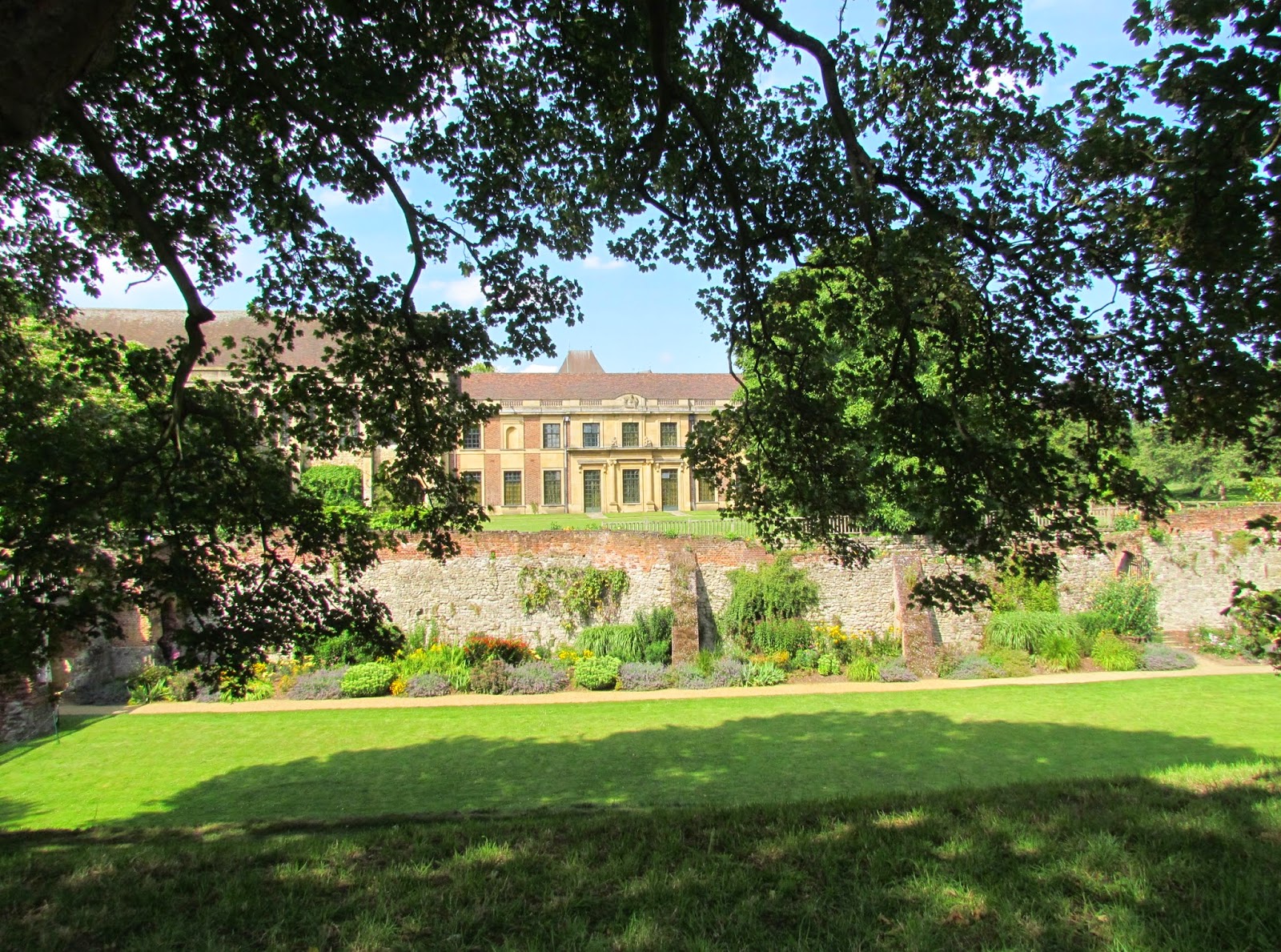 These are not extensive gardens. After the palace fell into disuse following the rise of Greenwich as the favoured royal home, Eltham's royal parks were turned into farmland and the Great Hall into agricultural buildings. 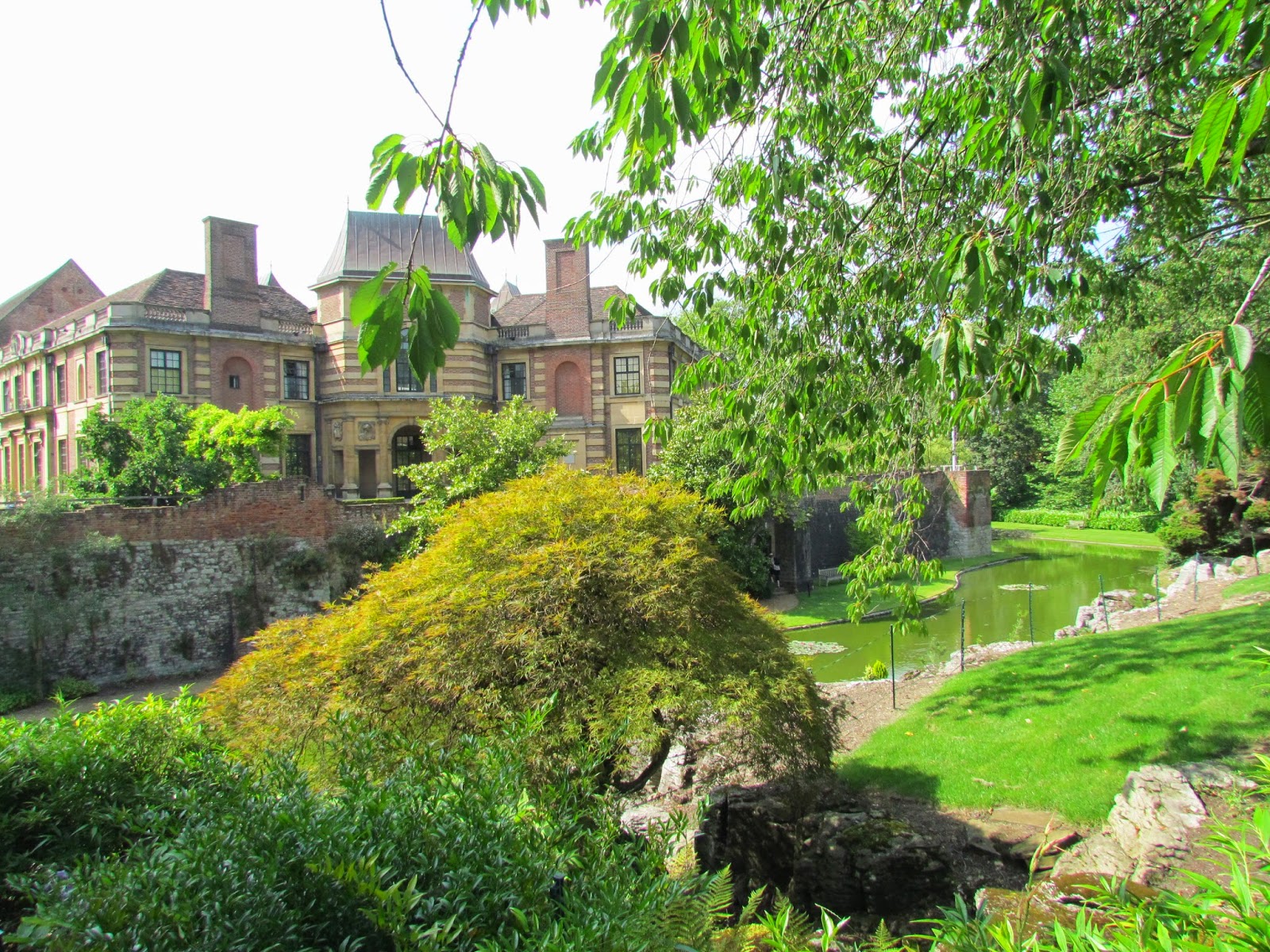 Gradually the land was eaten up by the developing town, so what was left when the estate was rescued is a relatively modest garden for a great house. However, it is just extensive enough to make a very pleasant afternoon outing, especially if you make a point of visiting the excellent tearoom. 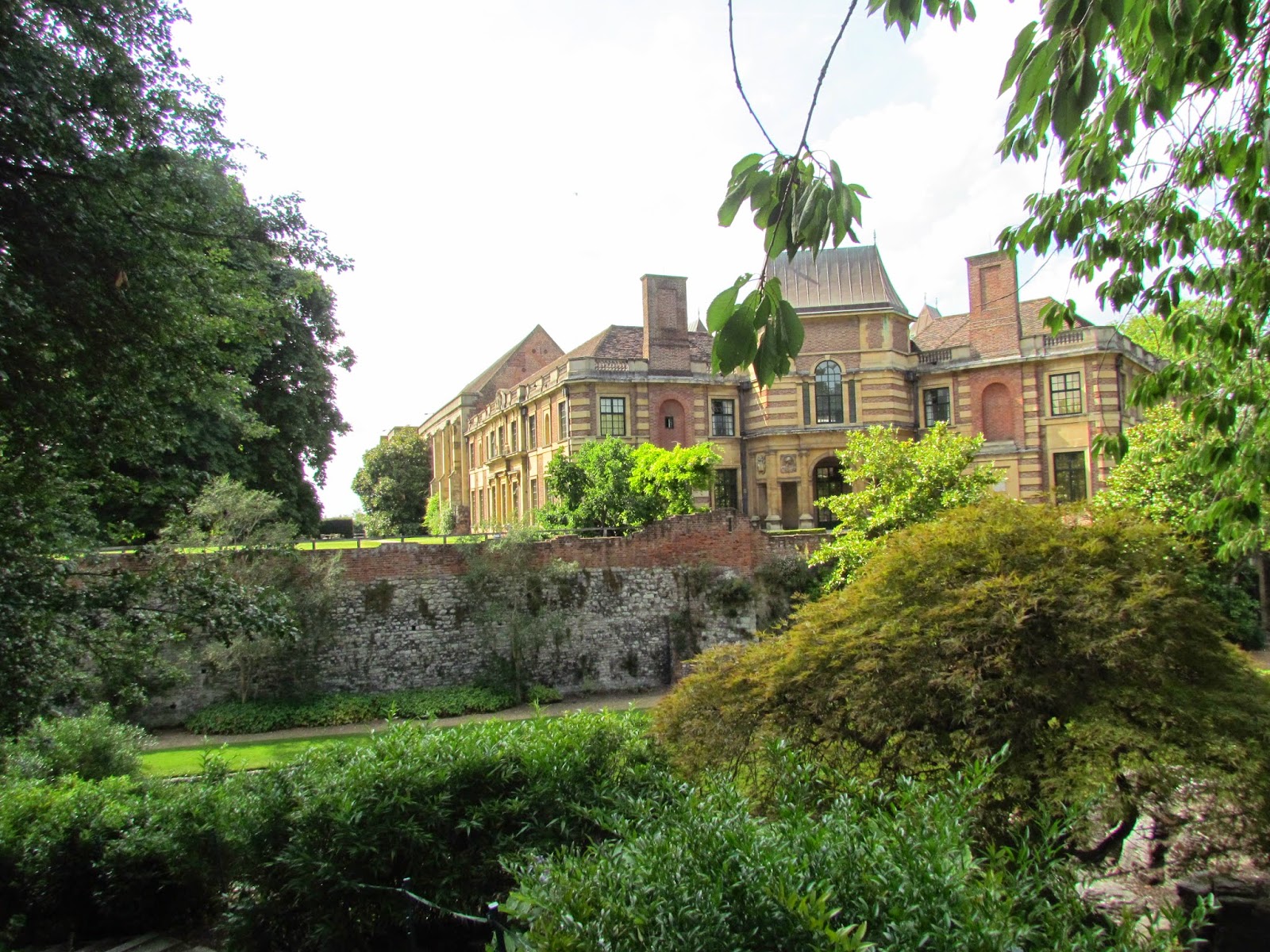 The garden is also a wonderful setting for the various activities organised for youngsters during the school holidays. There is plenty here to set their imaginations racing. 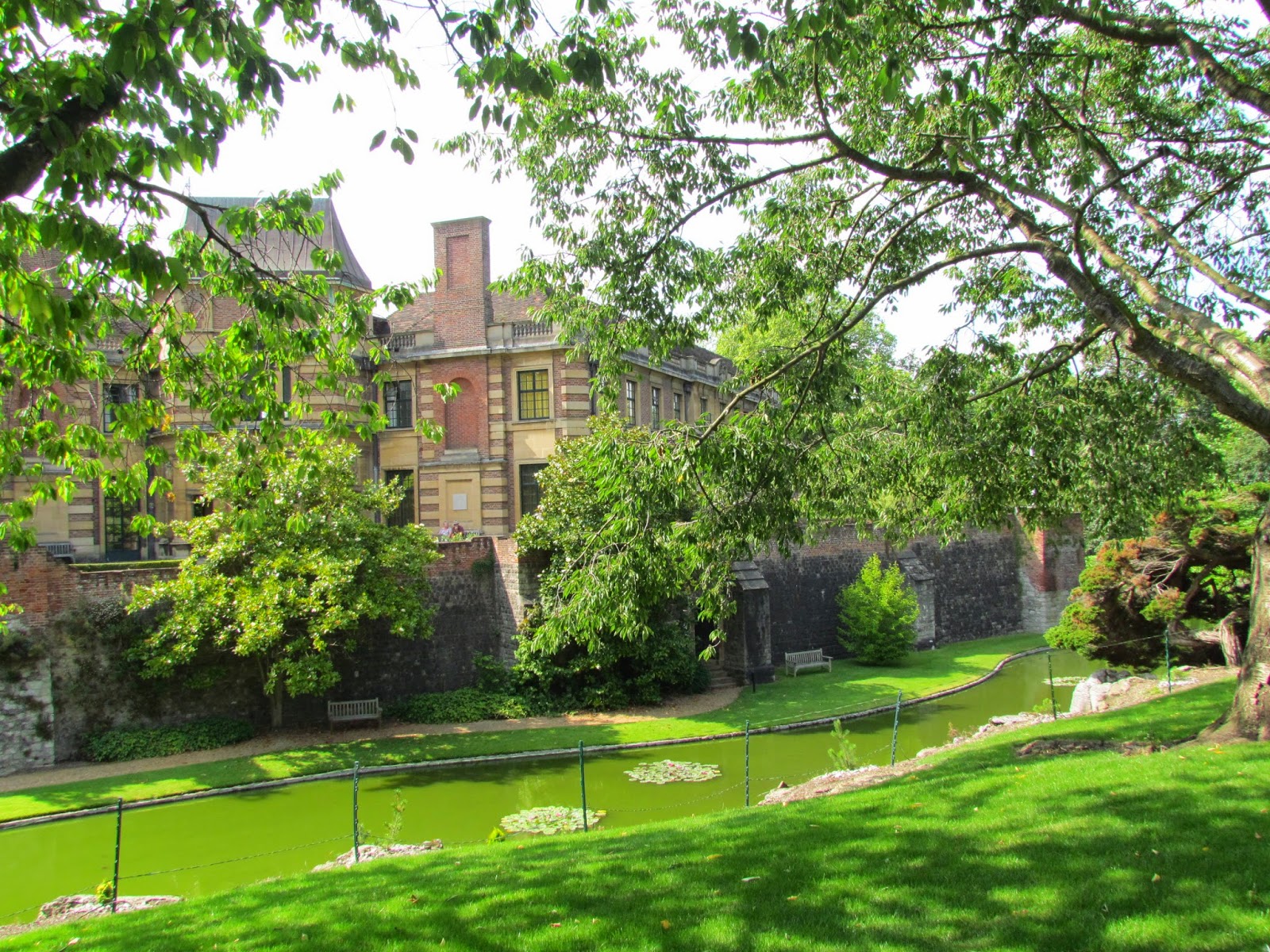 However, on a hot summer's day, it was enough for us oldies to amble along by the moat, admire the water lilies and watch the ducks diving for insects. 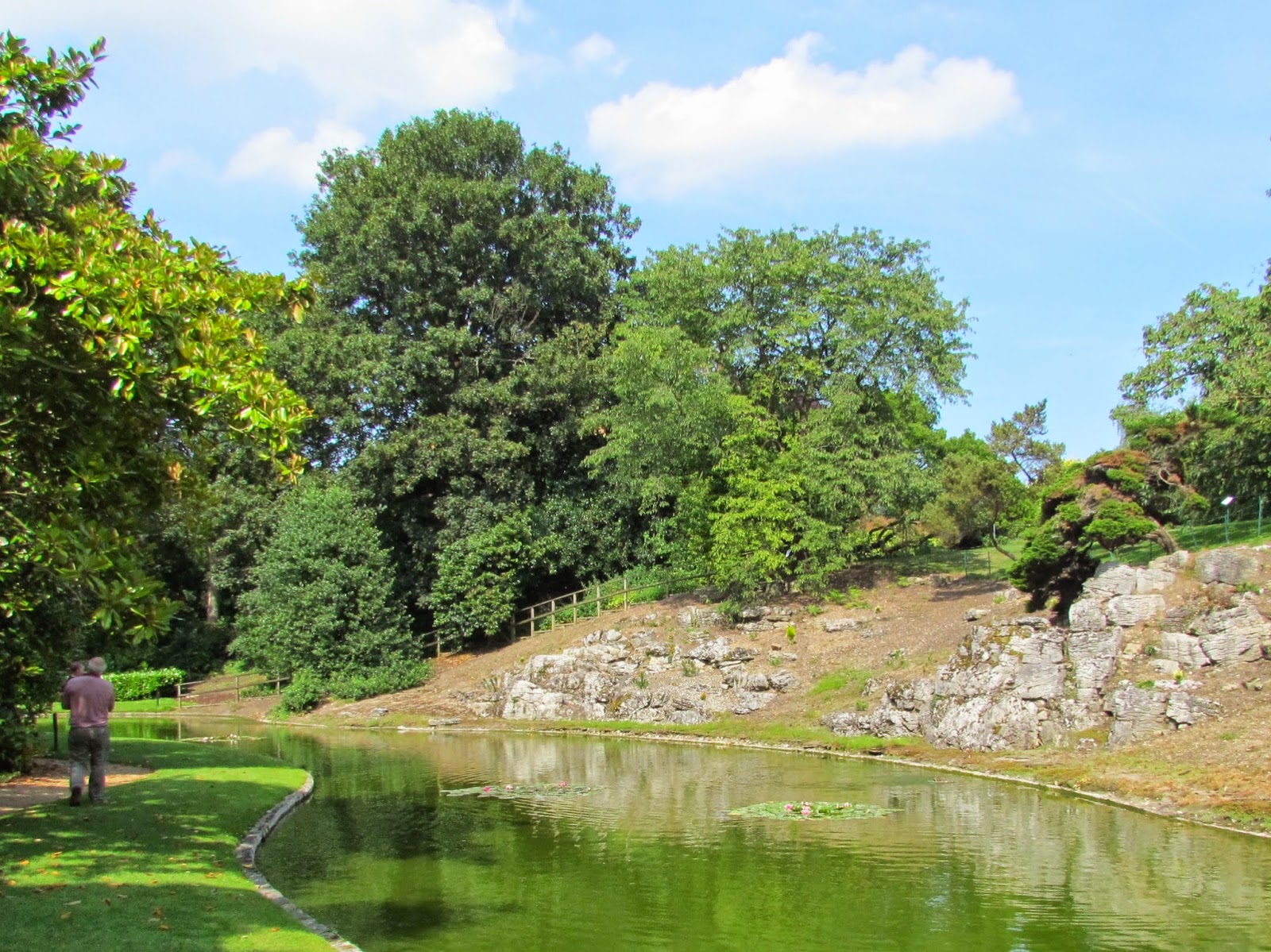 What a lovely afternoon out, and only a few miles from the Thames and the busy borough of Lewisham. Eltham Palace is a quiet haven of green grass and bright flowers, and with a wonderful Great Hall to remind us of the past.

Posted by Elisabeth Ritchie at 23:25