Following the Radical Road on a sunny Sunday evening

The Radical Road along Salisbury Crags in Edinburgh is a regular walk of mine. I first wrote about it in the very first post on this blog, To begin at the beginning, where I explained how the path was made by out-of-work Lanarkshire weavers, at the suggestion of Sir Walter Scott. It runs at the foot of the Crags, which you can see on the right of the photograph below. Walkers can look up at the bare rocky cliffs and then down the steep grassy slopes of the outcrop at the city of Edinburgh stretched out below them. Edinburgh Castle is on the left of the picture. 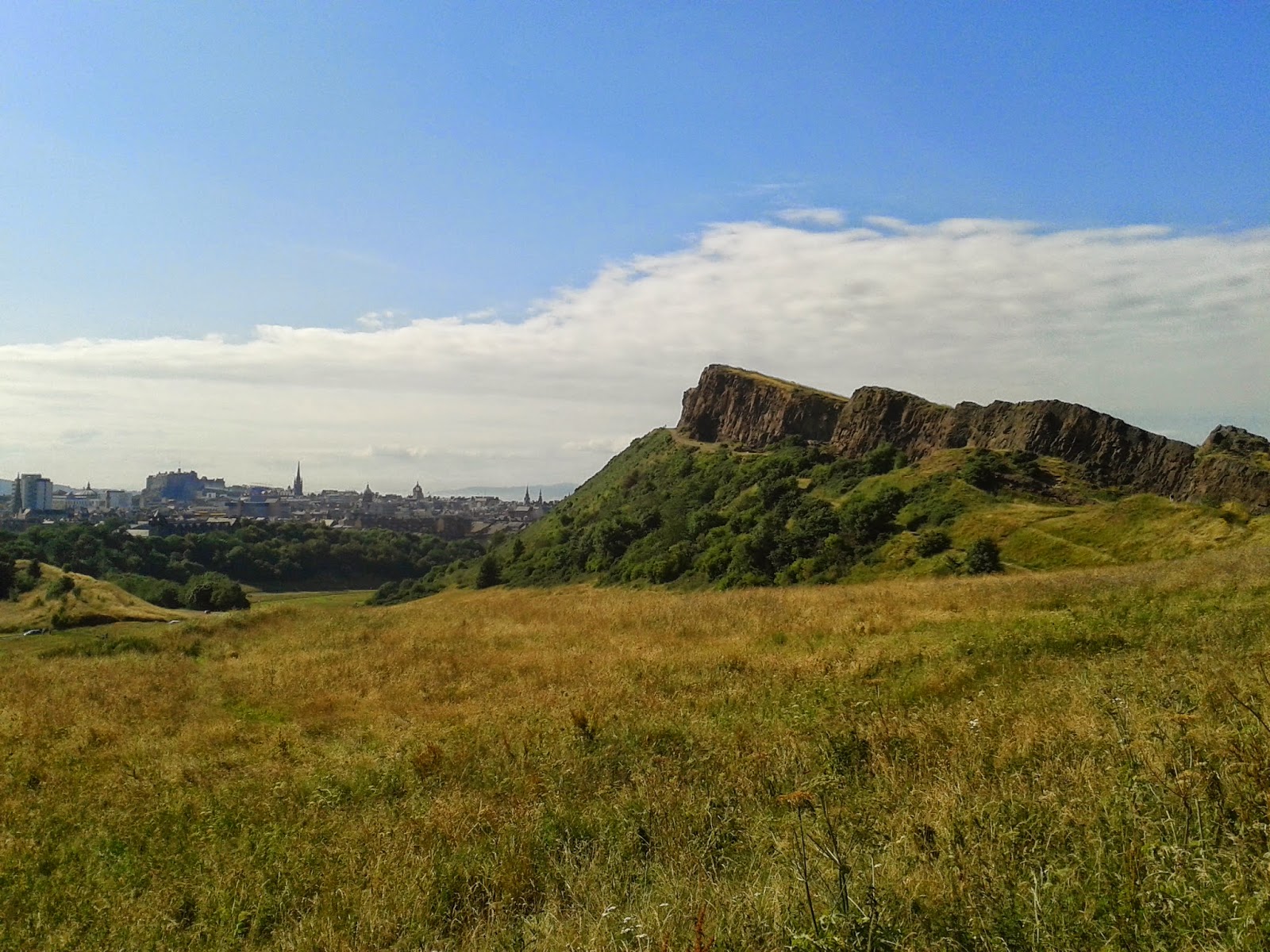 I usually start my walks from St Margaret's Loch in Holyrood Park, follow the tarmac road to Dunsapie Loch, then the curve of the hill above Duddingston village and loch and then join the Radical Road just before the quarry. However, today I did a shorter version, following the valley below Arthur's Seat and then making a sharp hairpin bend. I had intended to make for the Radical Road immediately I reached Salisbury Crags. However, just by chance I came across a little path which led me right into the quarry at the foot of the Crags. Here the rock formations are quite striking. You may be able to make out the clearly delineated horizontal and vertical layers of rock in the photograph below. 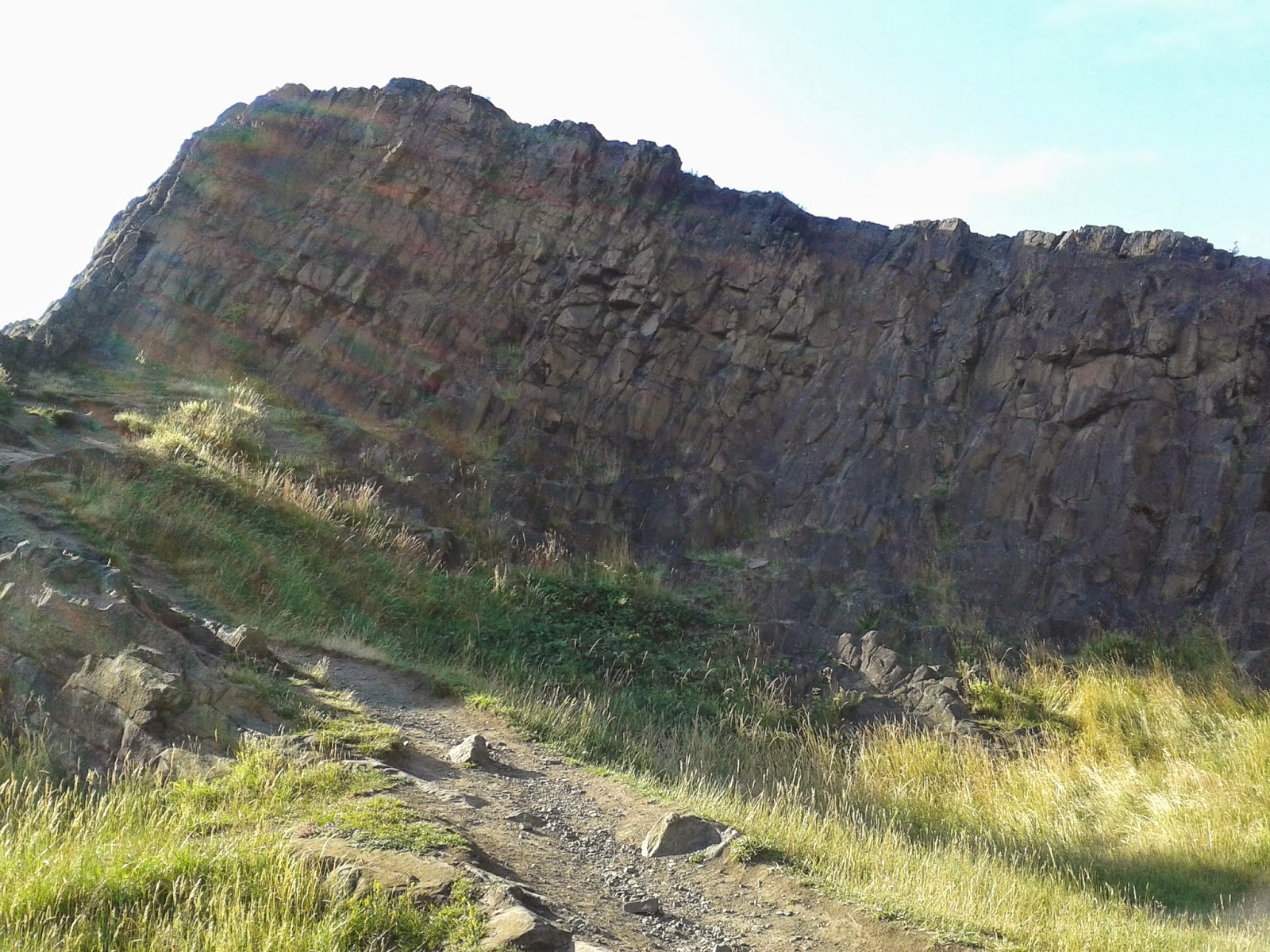 It was on Salisbury Crags that James Hutton, a key figure in the Scottish Enlightenment, made some of the discoveries which led him to develop his theories about the origins of the rock formations he saw around him in Edinburgh and elsewhere in Scotland. He wrote about them in his book The Theory of the Earth, published in 1795, two years before his death in 1797. He is buried in Greyfriars Kirkyard. You can find out more about Hutton's discoveries at Dynamic Earth, a museum of natural history just below the Crags. We also came across his theories when we visited Jedburgh and wrote briefly about him in A day out from Edinburgh: Jedburgh. A key aspect of his work was his realisation that rocks are formed over many thousands of years, more than the 6,000 years a literal reading of Genesis proposed. He believed that the formations he observed had come about because of three processes: erosion, sedimentation and uplift. On Salisbury Crags he observed how layers of rock had been squeezed to form waves and had then been eroded. Other layers had then formed on top. As the resut of his contribution to scientific thought, Hutton is considered to be one of the fathers of modern geology. 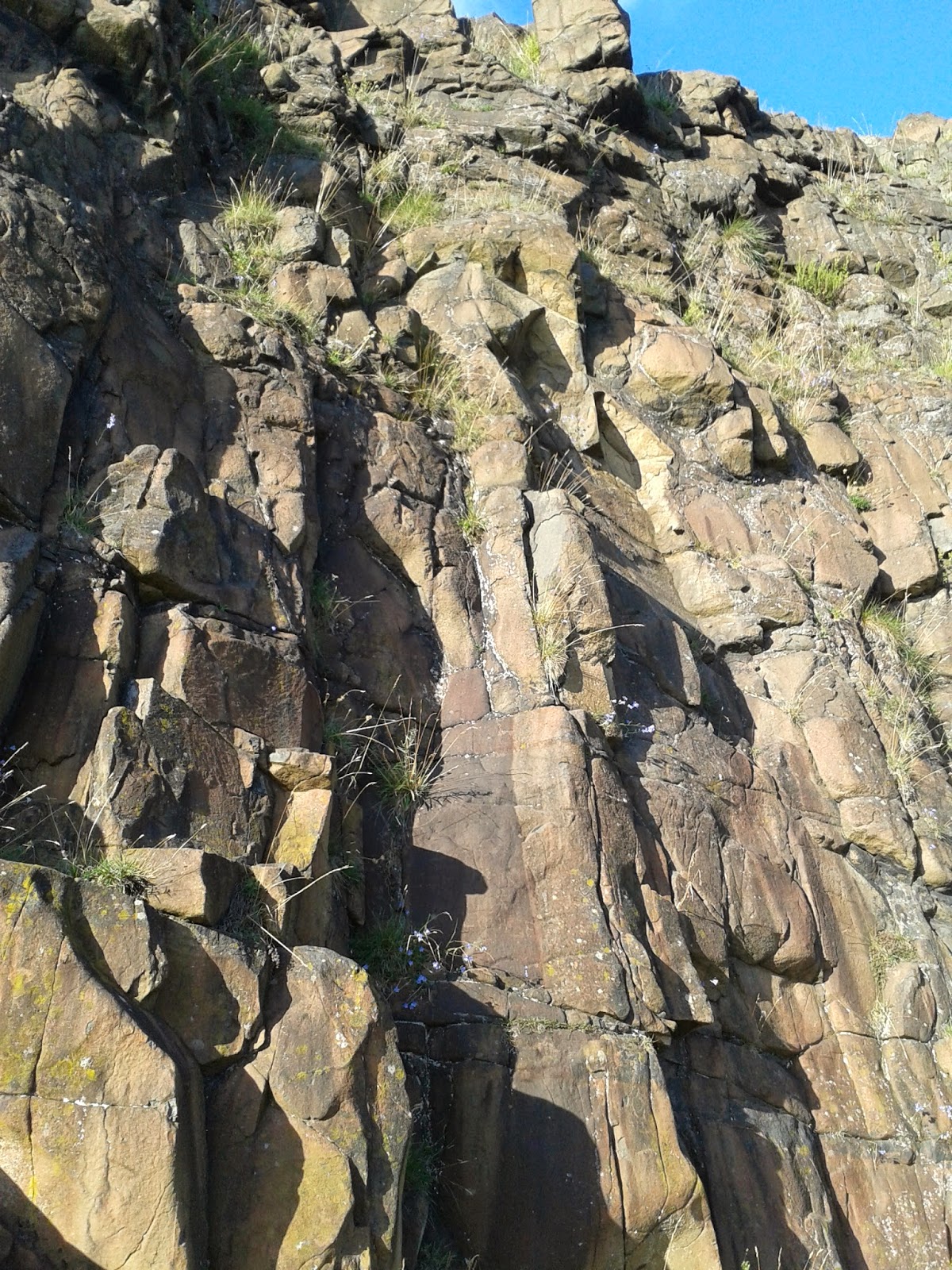 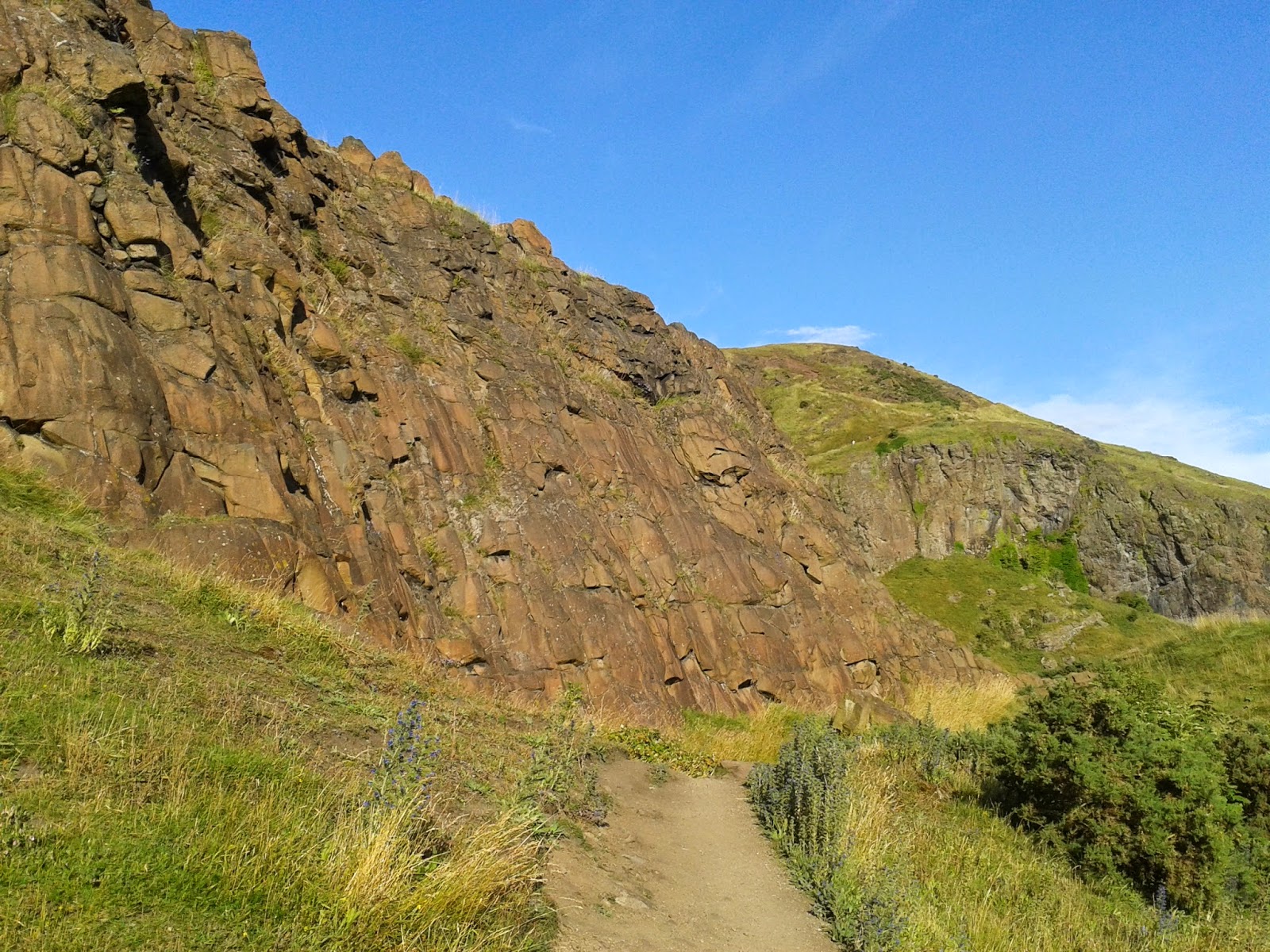 Today the quarries where Hutton carried out his observations are no longer in use, and the cliffs have been much reduced since his day. Nevertheless, the area attracts many happy picnickers as well as enthusiastic amateur rock climbers. 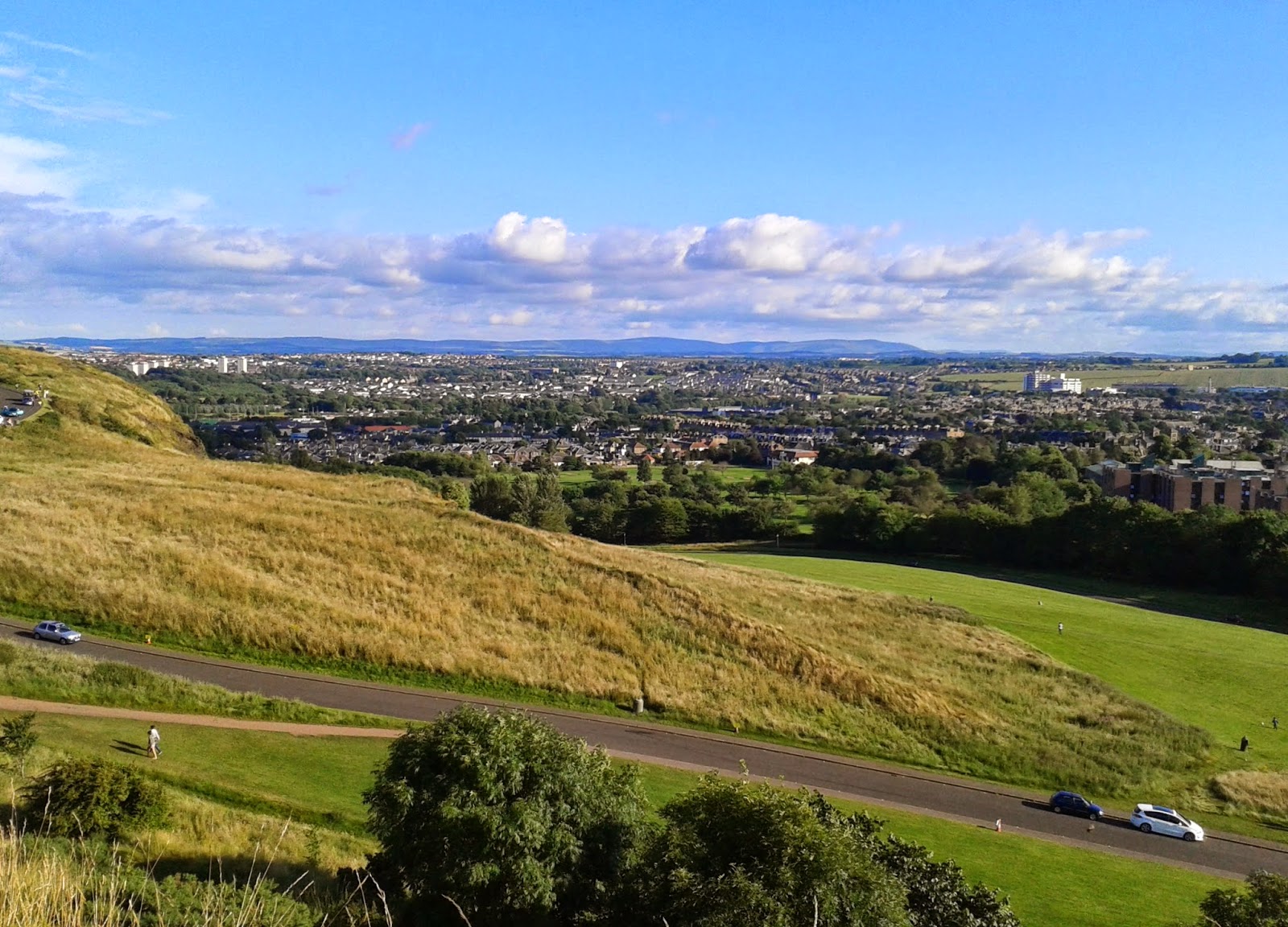 From the Radical Road, which skirts the cliffs, you can look south towards the Pentland Hills. 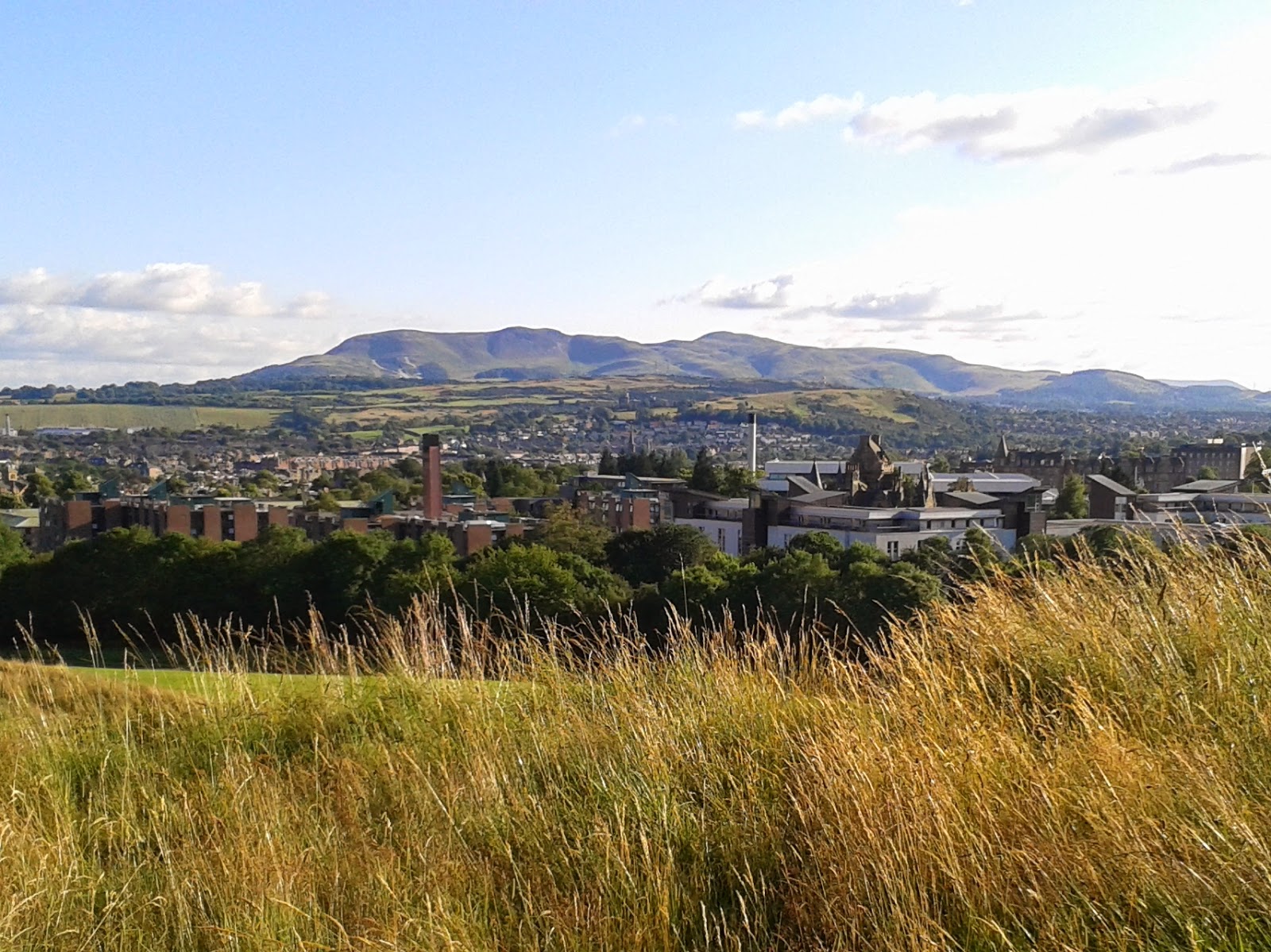 As you climb the slope, you can see more cliffs ahead of you. 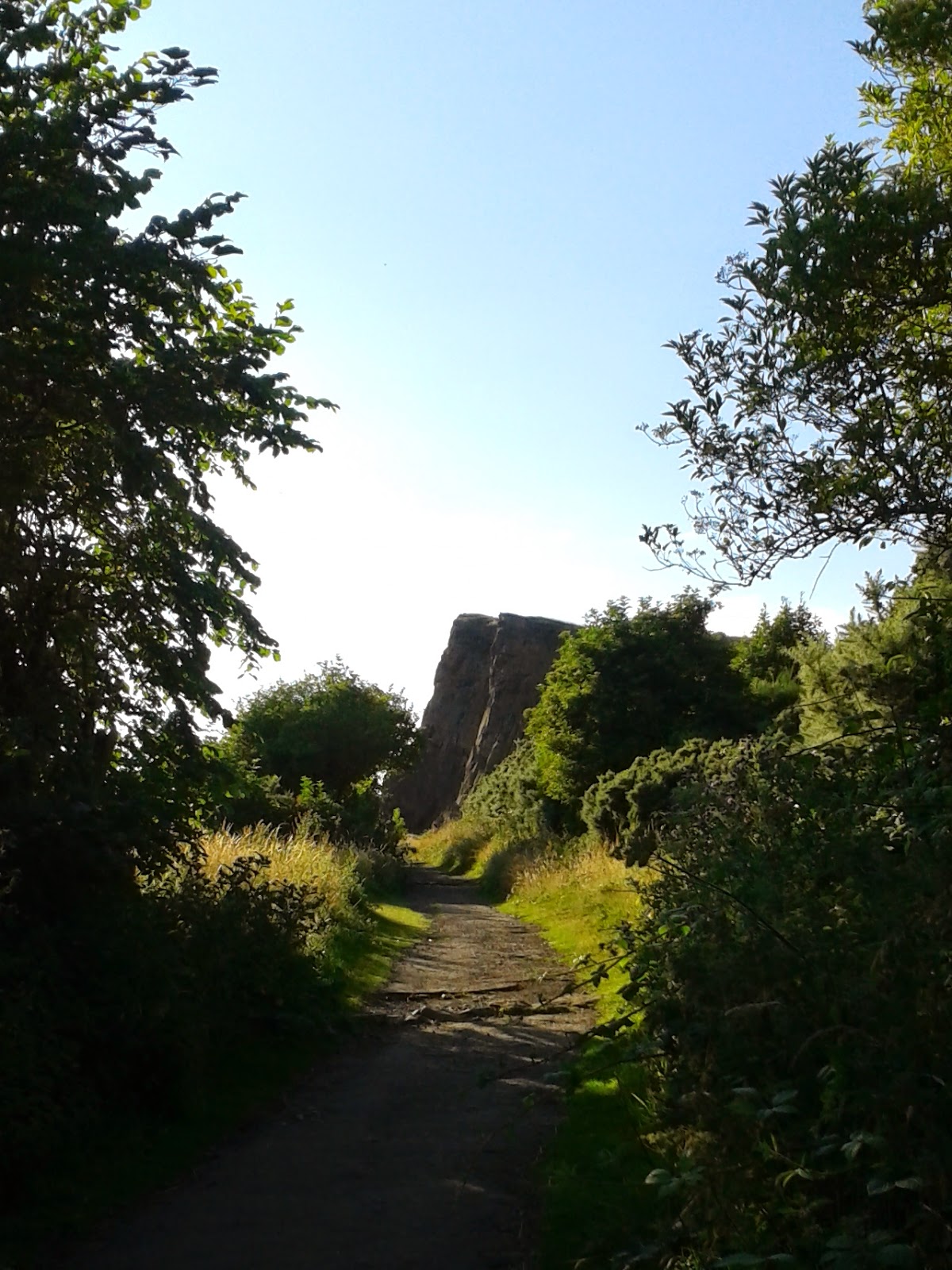 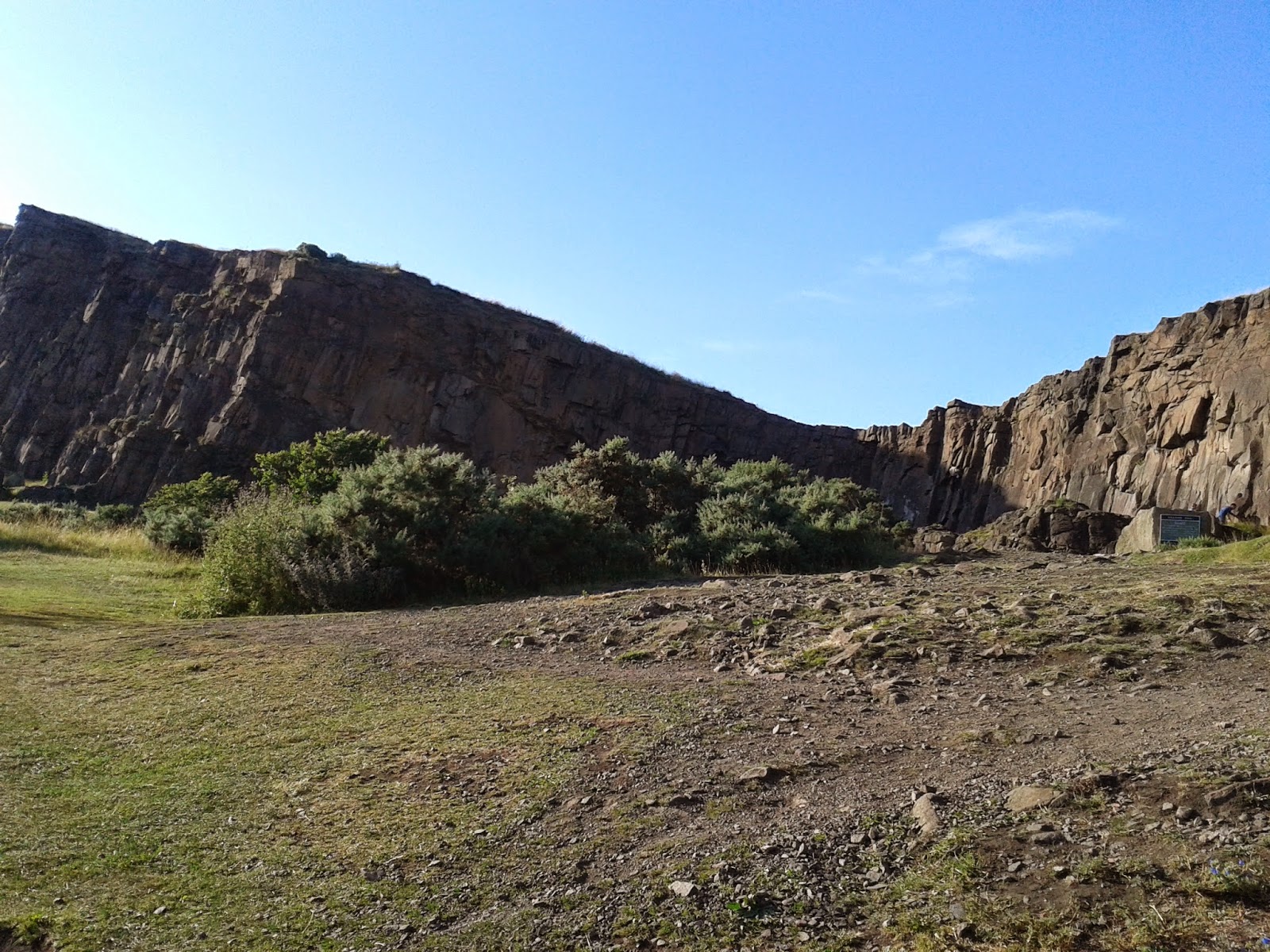 Be warned though, rock falls are frequent and the park has erected a number of signs to tell you so. 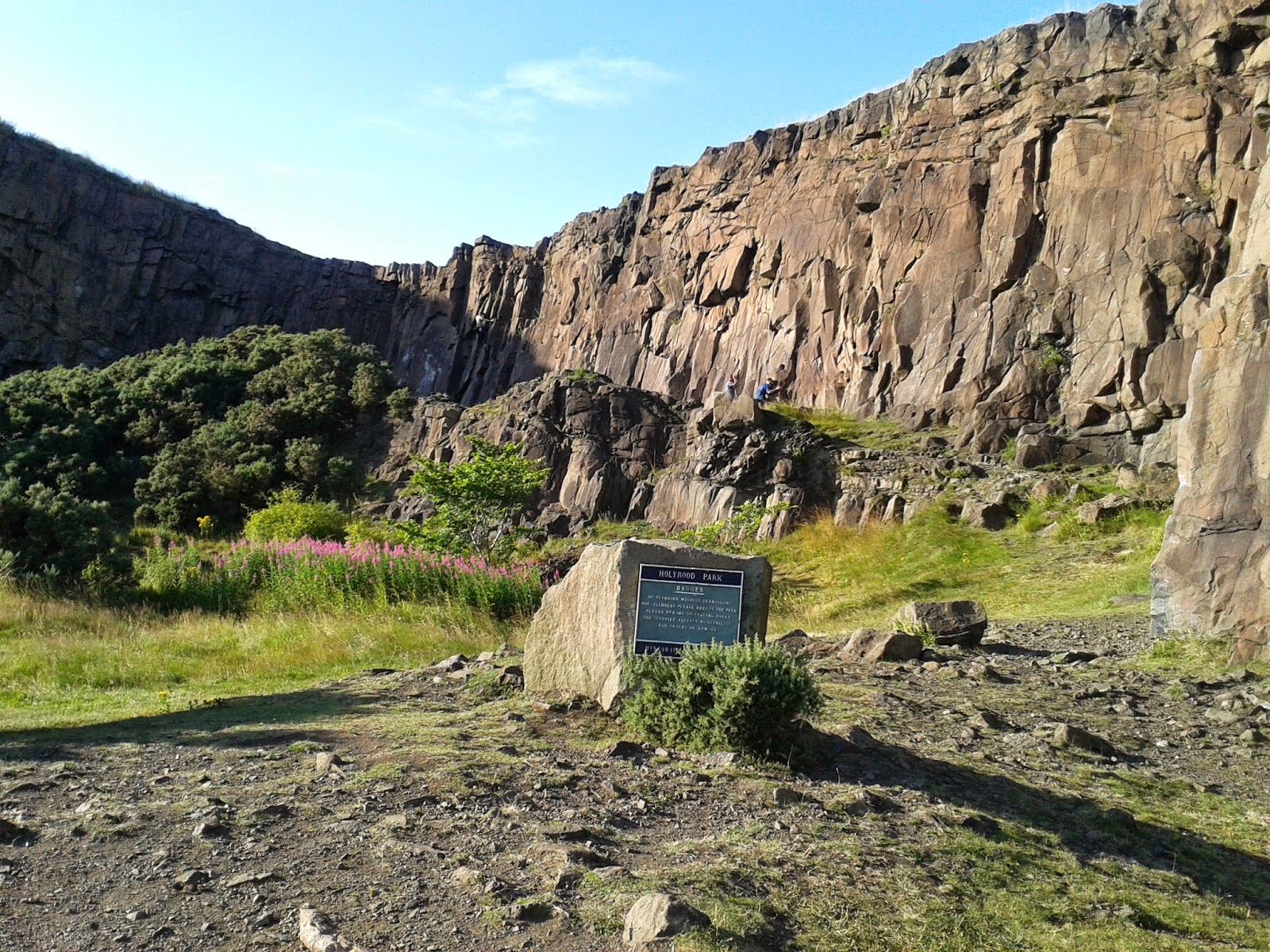 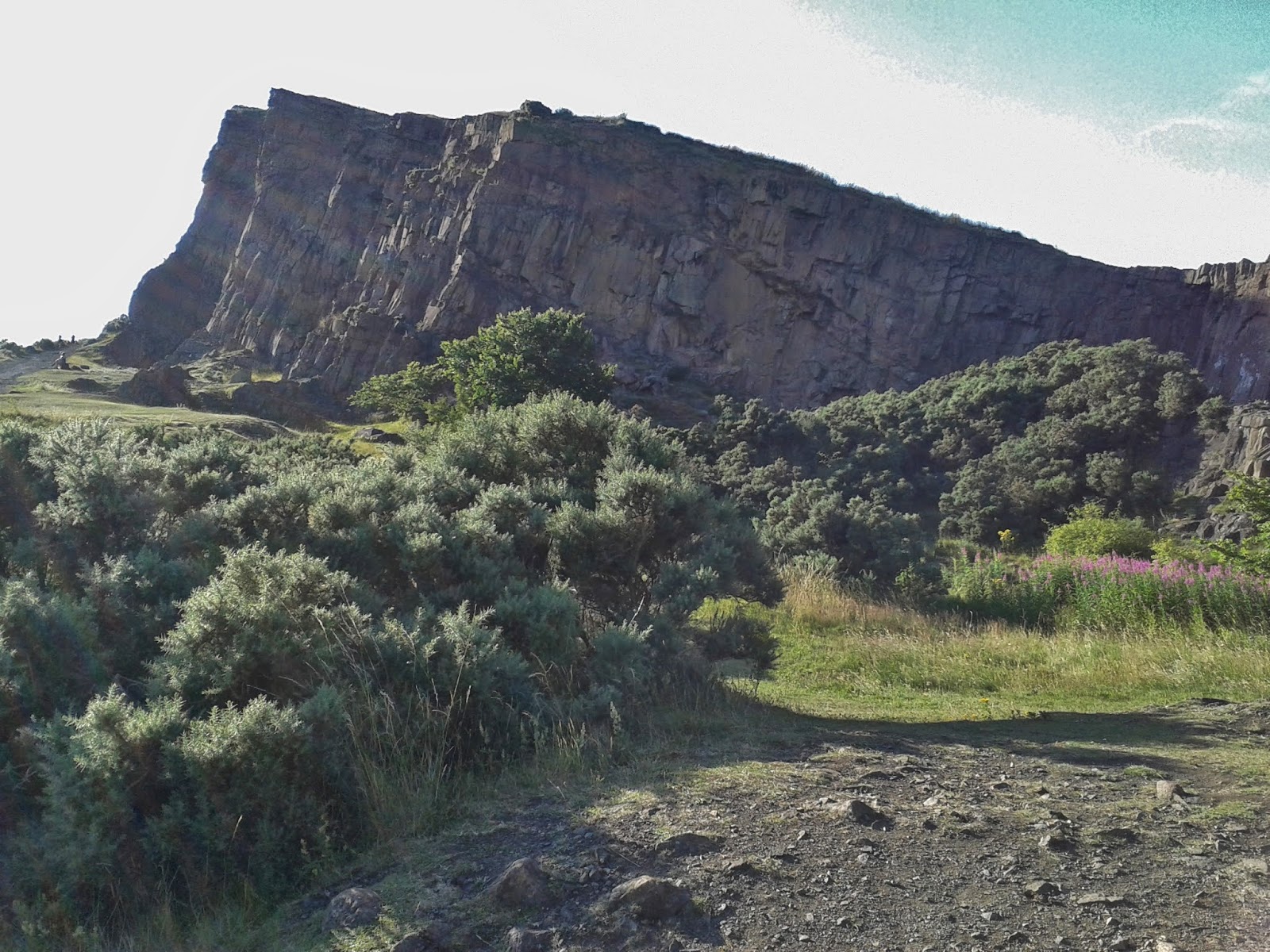 To the north east, the walker can look out over to the castle, hazy here in the early evening sun. 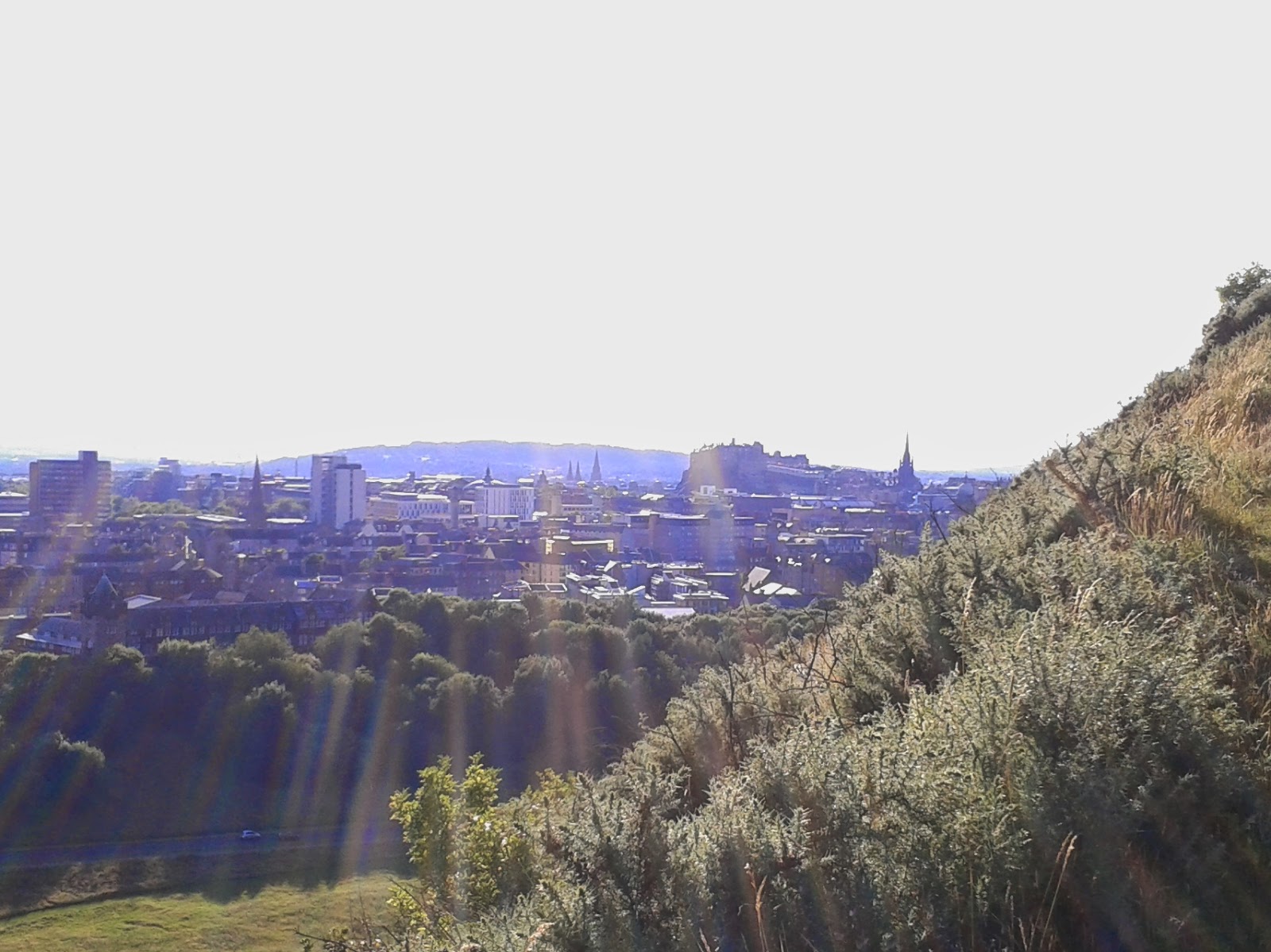 Above you, as you glance back through one of the gaps in the cliffs, you can catch sight of Arthur's Seat. 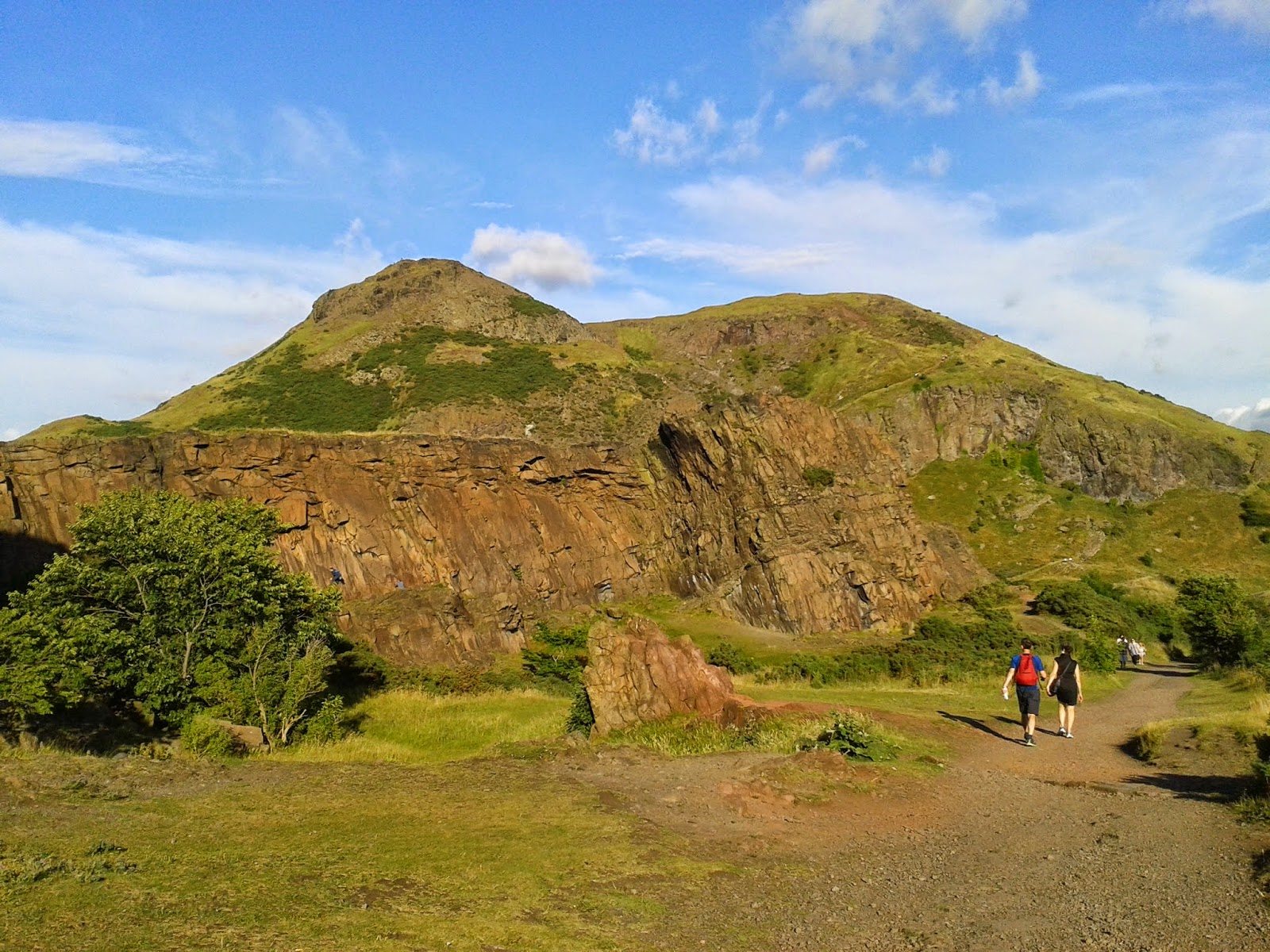 Today, there were hundreds of Scottish bluebells (harebells to the English) in the vertical cracks of the cliff. Sadly they didn't come out on the photos, but believe me, they were there. There were also pretty pale pink vetch, bright pinky-purple thistles and many other wild flowers of whose names I have no idea. 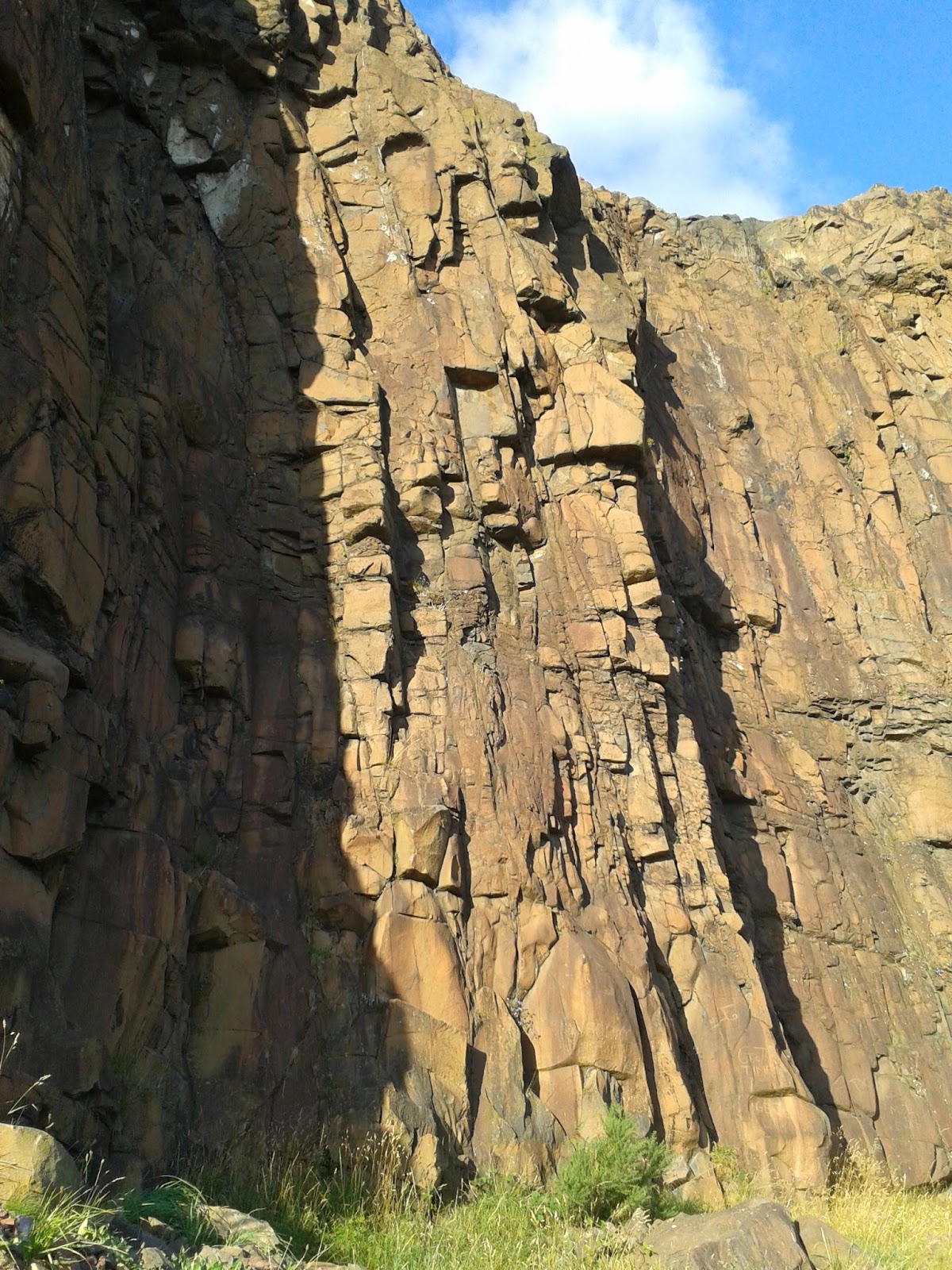 At the top of the cliffs is one of Holyrood Park's four Iron Age hill forts, an ideal viewing point from which you can really get a 350 degree view of any potential aggressors. Not to be attempted with small children in tow, however. 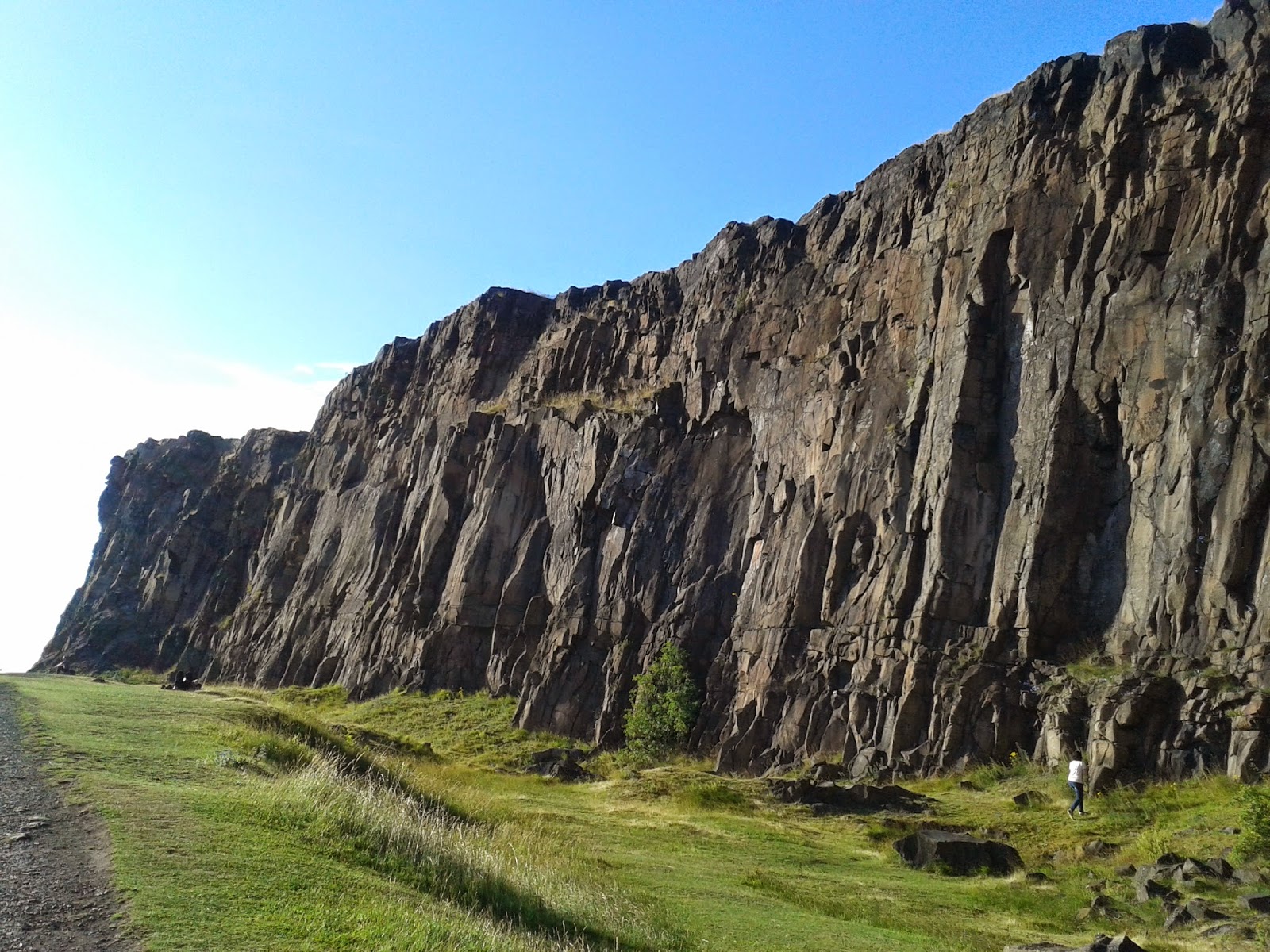 As the Road climbs and turns, you face north, across the Firth of Forth, with the hills of the Kingdom of Fife before you. Down below, in the foreground, are the notorious flats of Dumbiedykes, now refurbished by Edinburgh City Council. 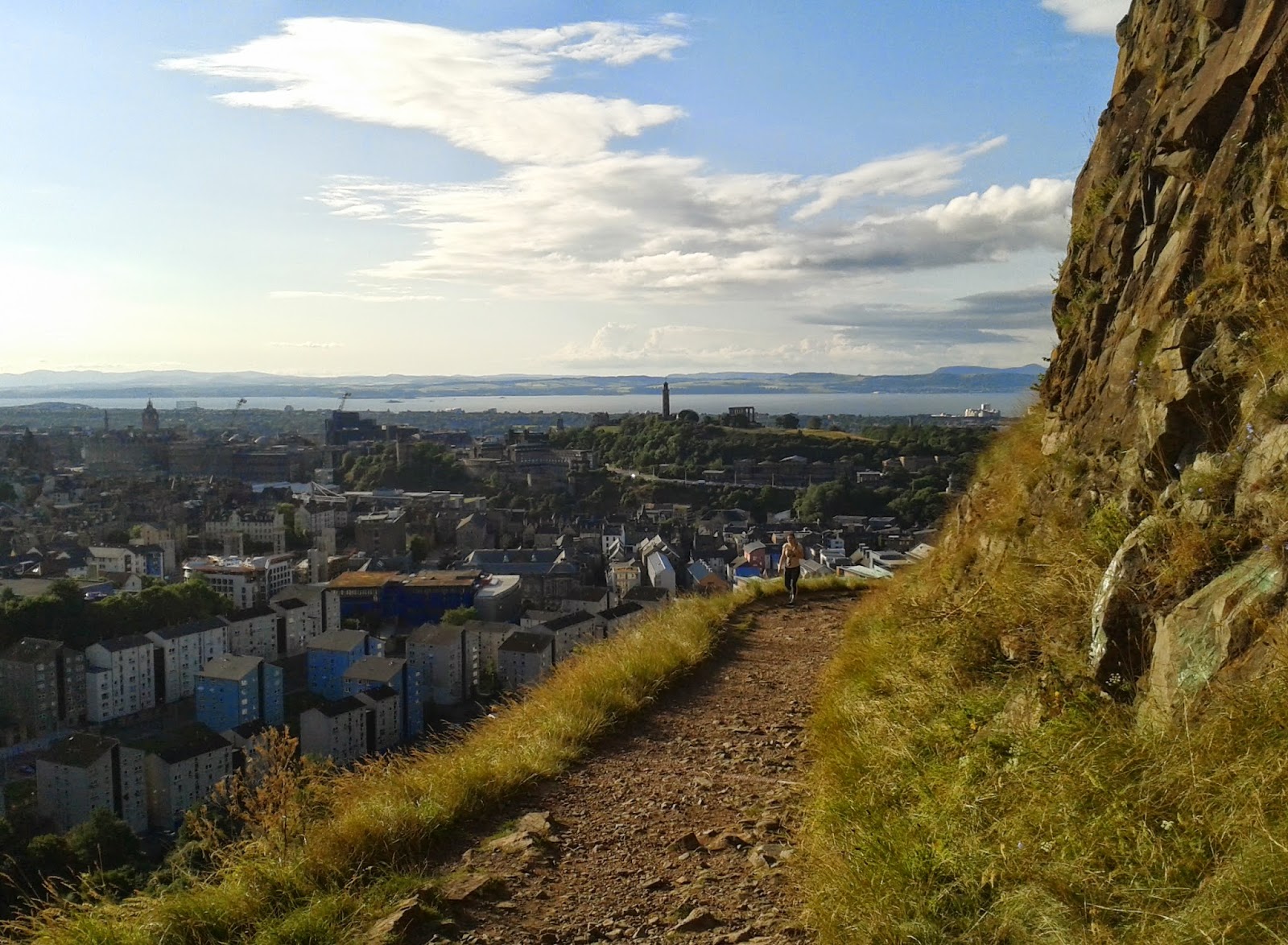 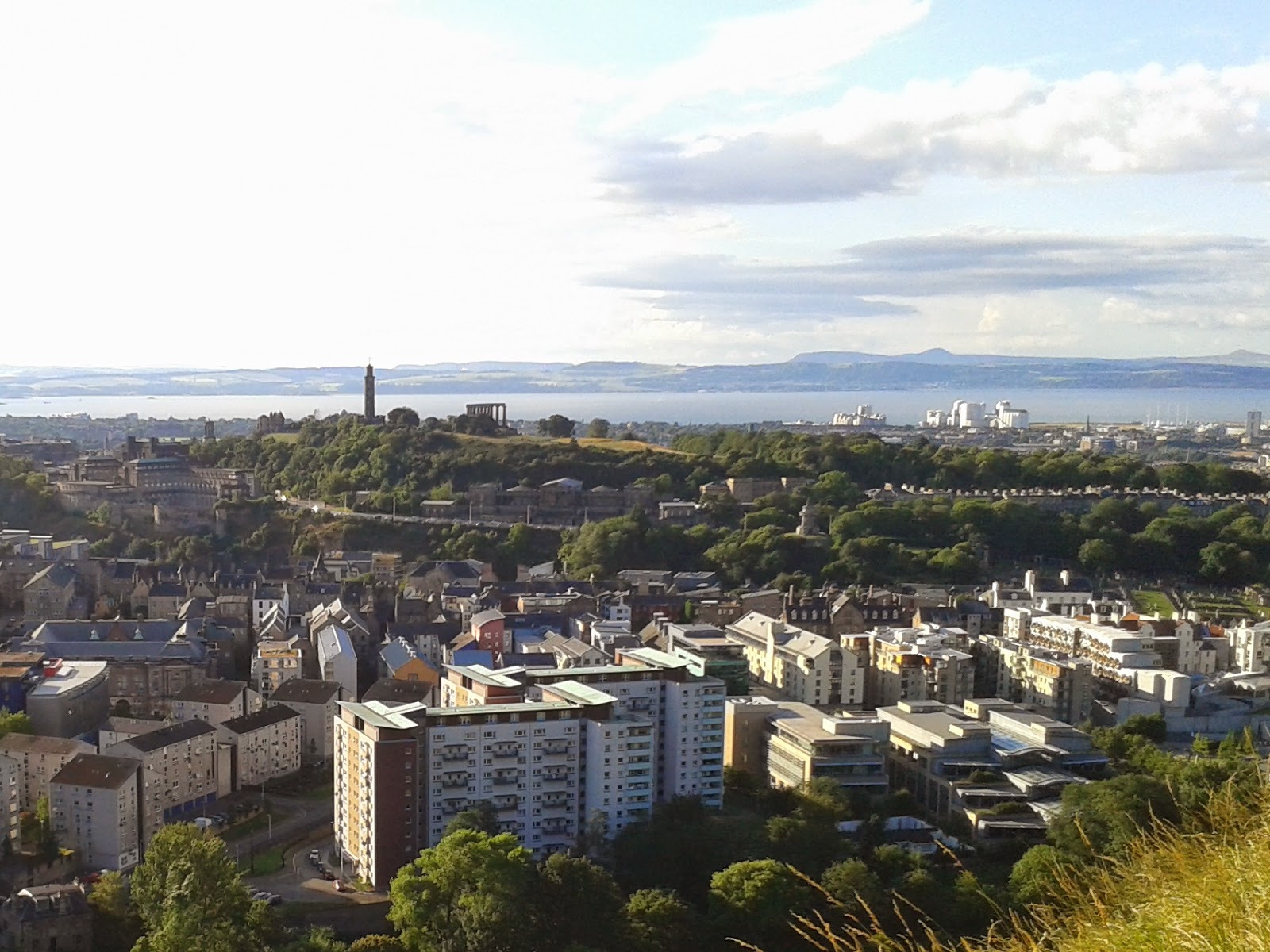 In the distance, you can make out the National Monument and the Nelson Monument on Calton Hill, an insignificant mound when observed from  Salisbury Crags. 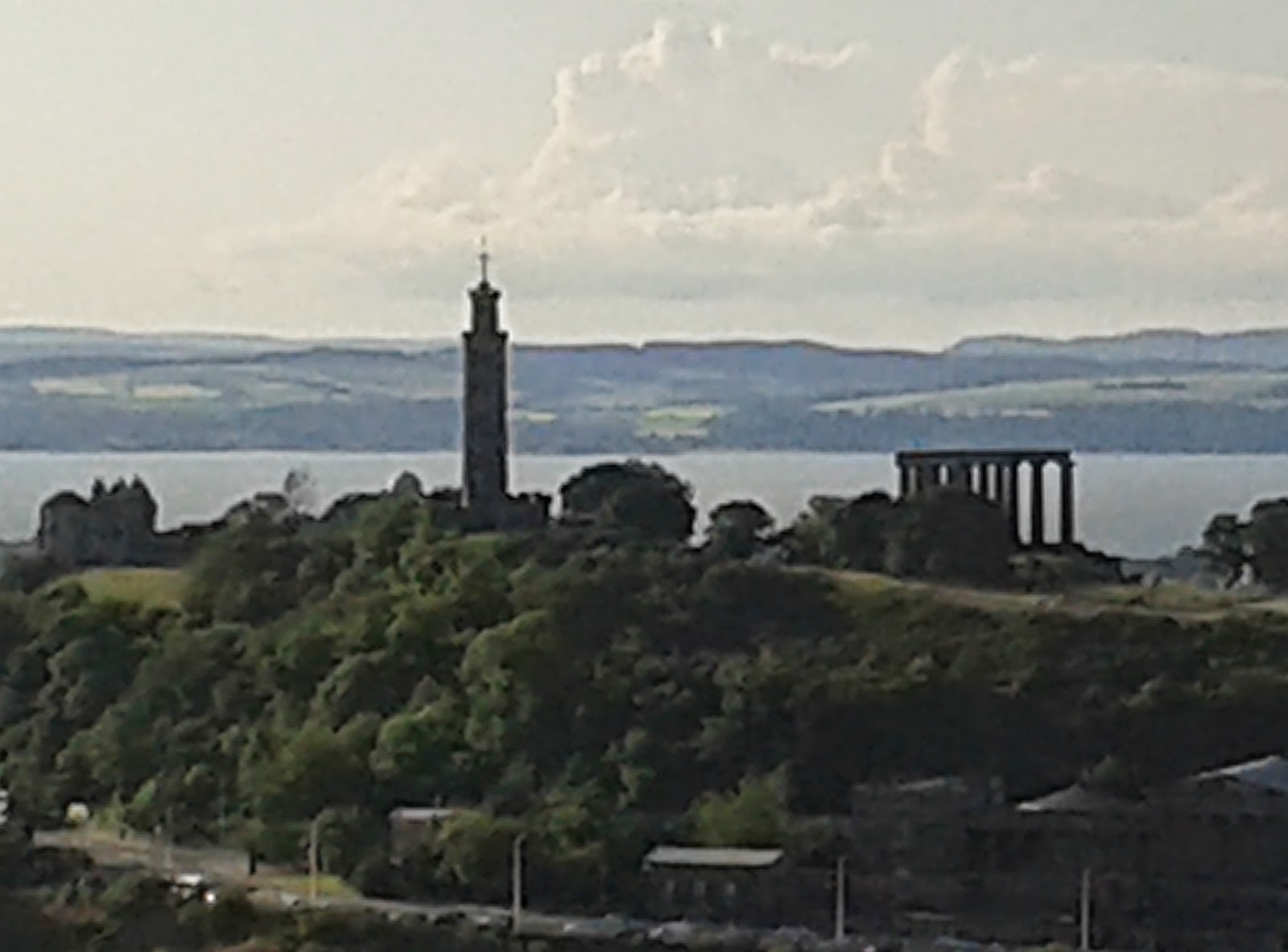 Beyond the flats is Dynamic Earth, its unmistakable spiked shape like a languid armadillo stretched at the foot of the Crags. 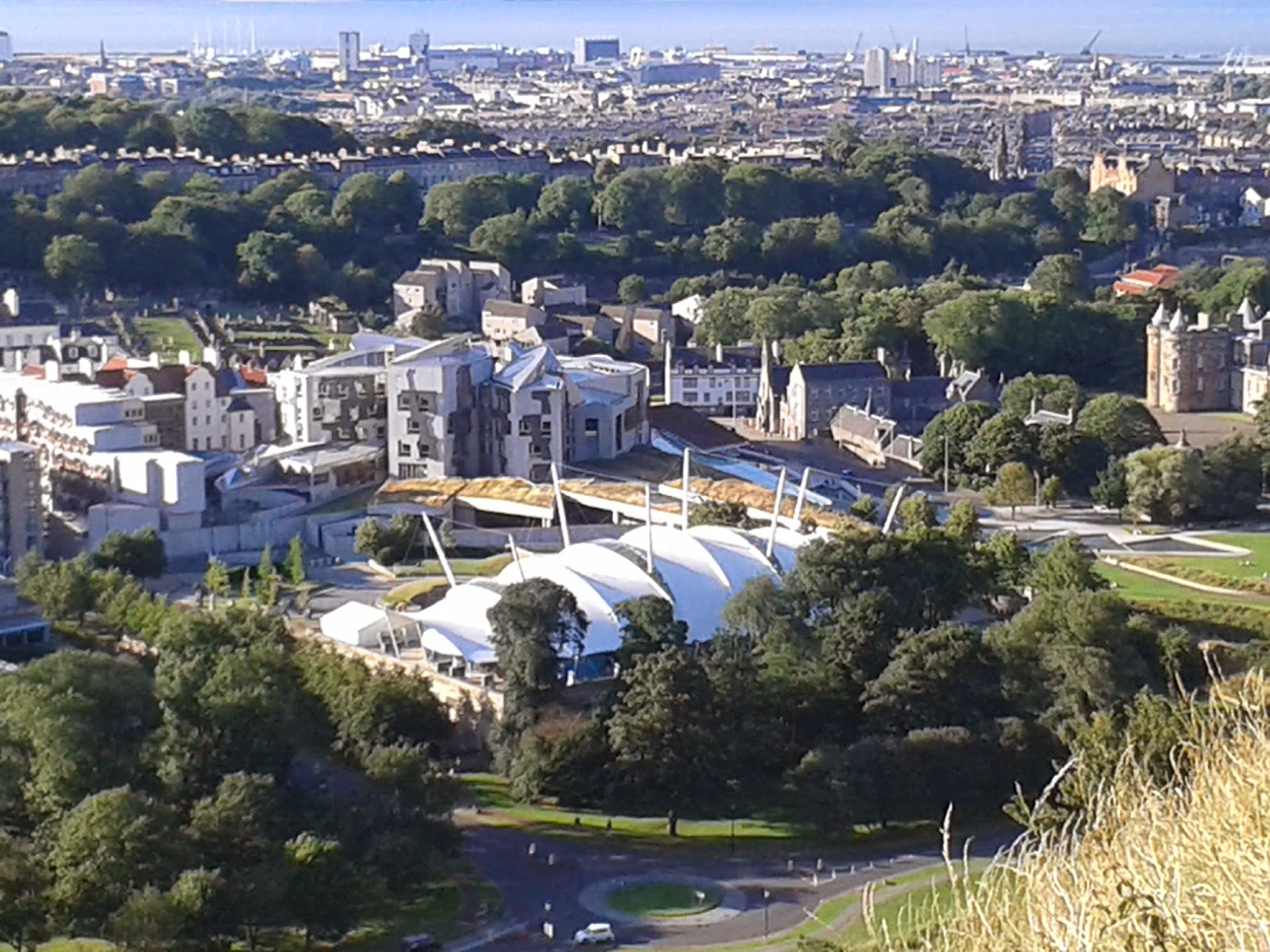 Behind it lies the Scottish Parliament and, across the road, Holyrood Palace, the Queen's official residence when she visits Edinburgh. 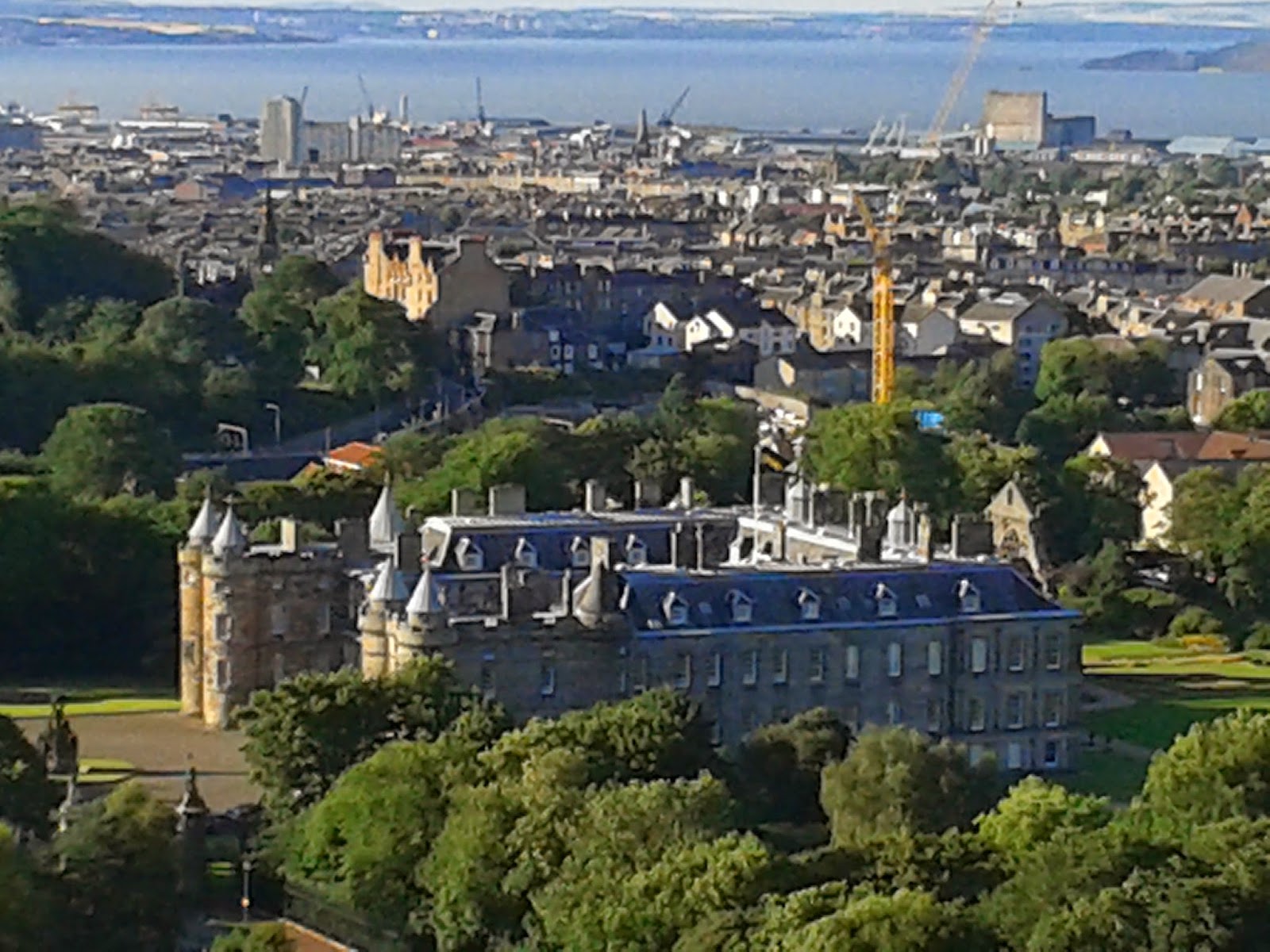 The Radical Road makes a last bend and the steep and rather slippery descent begins. 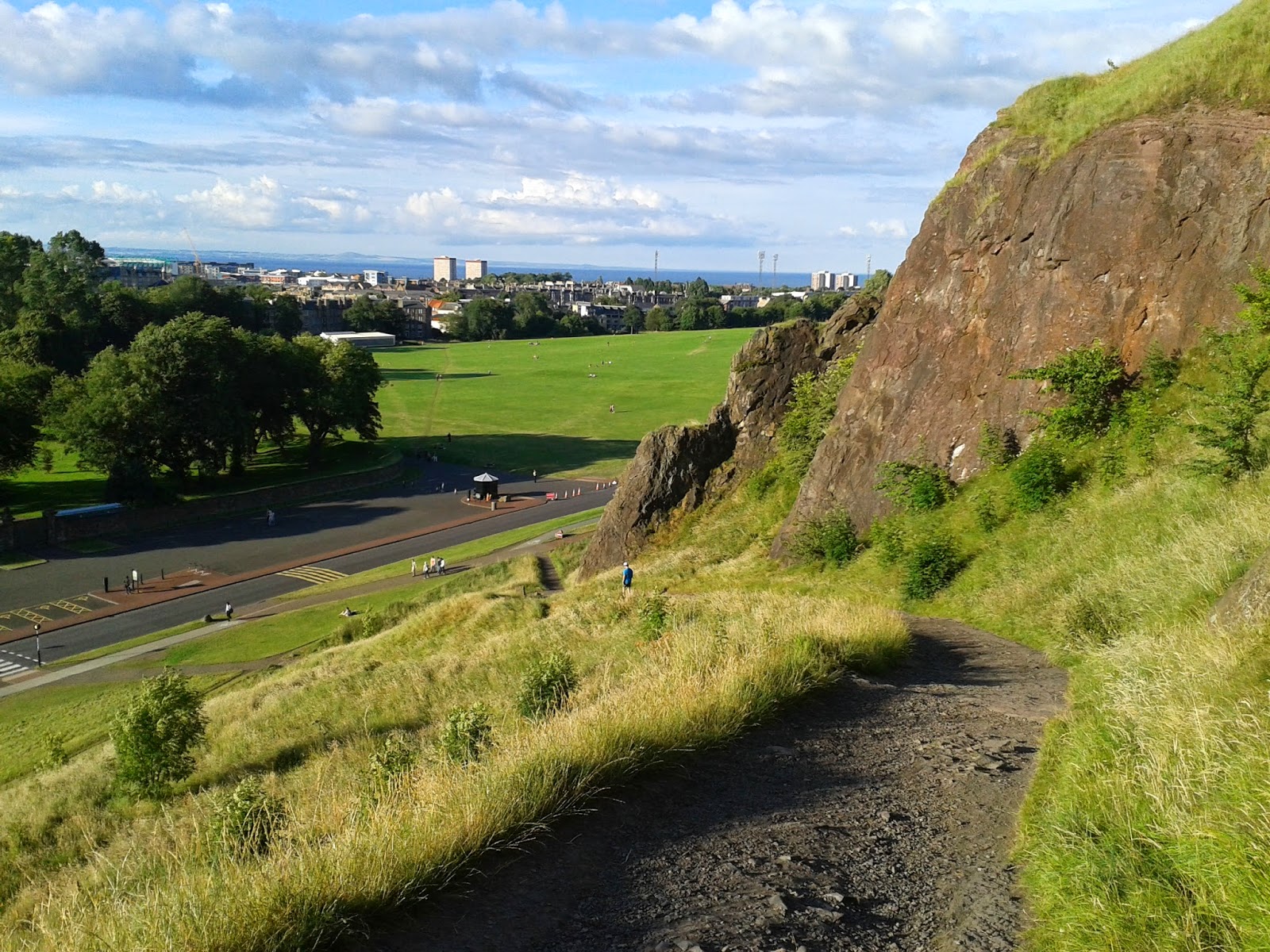 In the distance lie grassy fields. In fact, millions of years ago, these fields lay below the sea. They are the remains of two fossilised beaches, which explains the rather odd shelf-like plateaux stacked above each other. 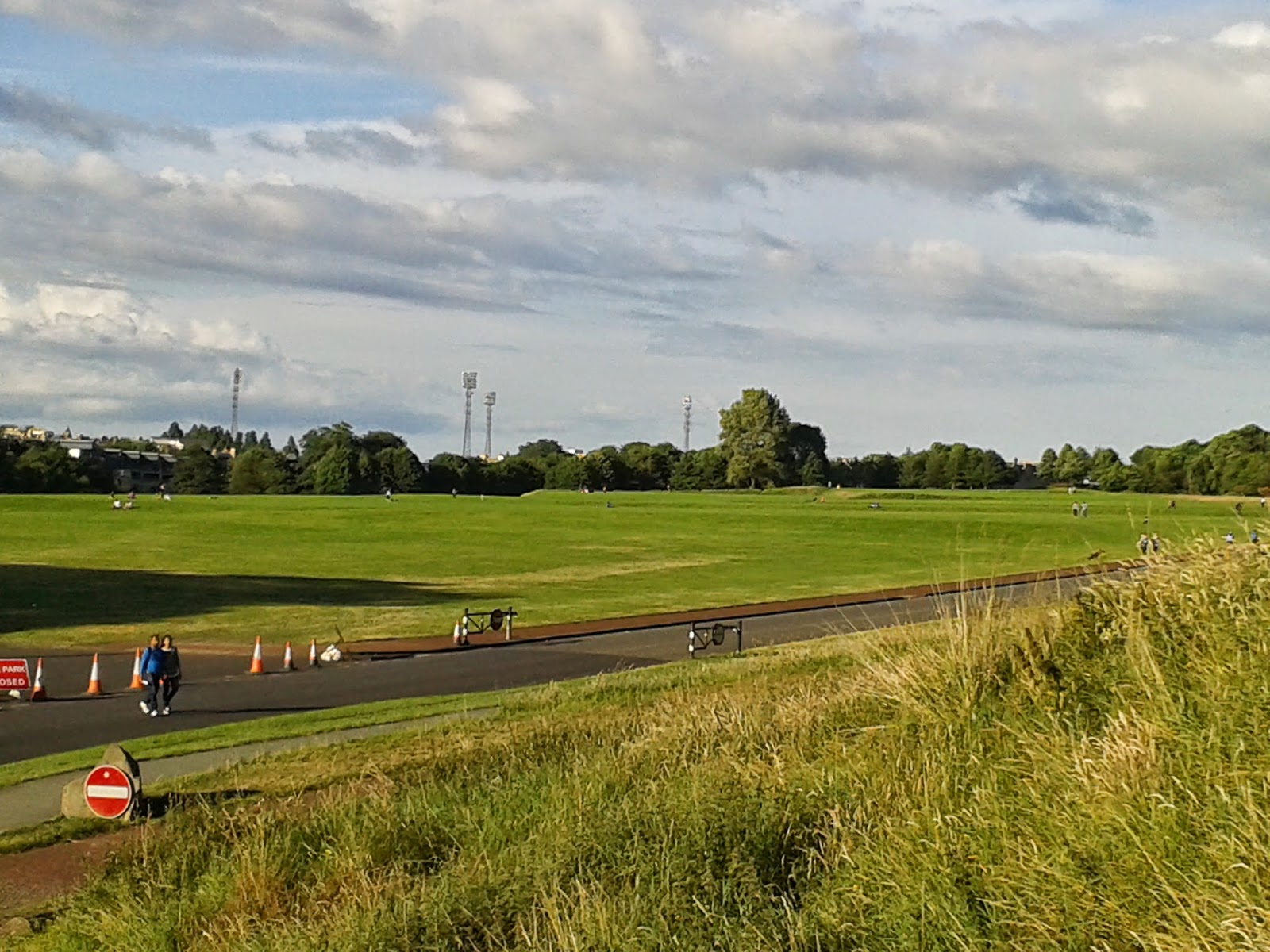 The path descends towards the car park. Here you can now see the Palace from close up, the residential quarters on the left and the ruined abbey on the right, behind the Queen's high walls. 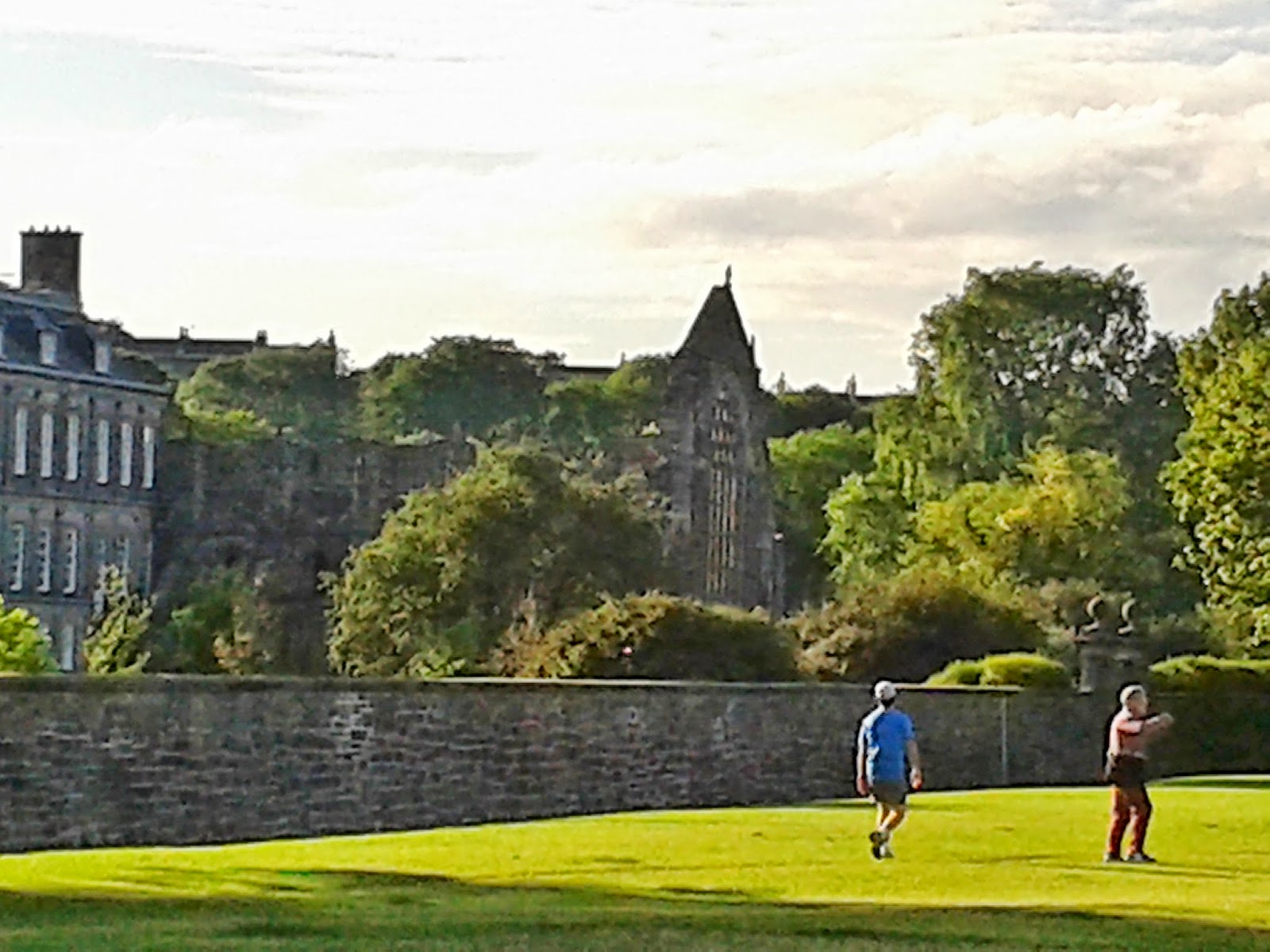 Right at the bottom of the Road lies St Margaret's Spring, a natural water source going back to mediaeval times. 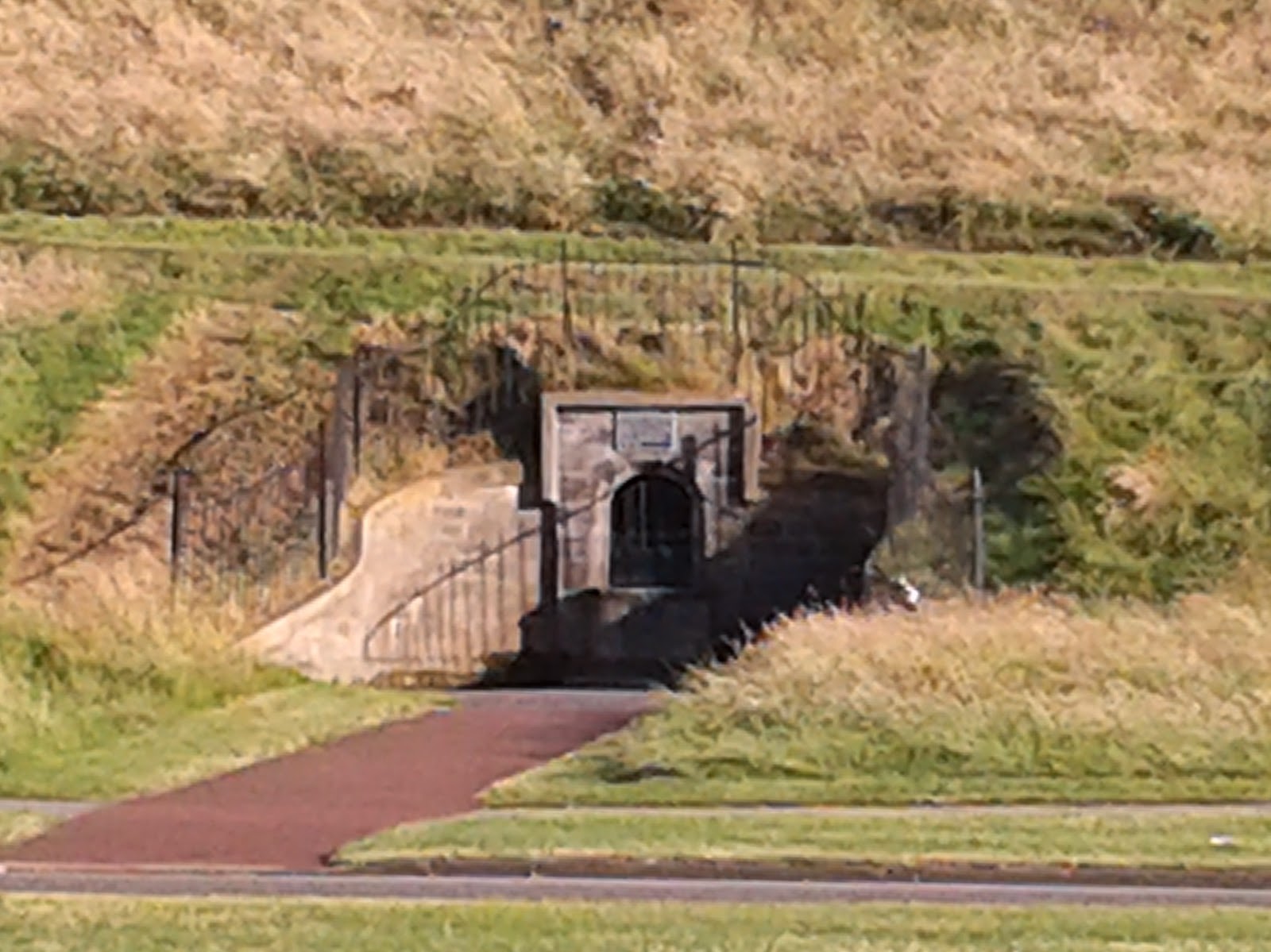 Time for us to make our way back home though. Looking back over your shoulder, you see Arthur's Seat rearing up again, a 'mountain' in the middle of a city. 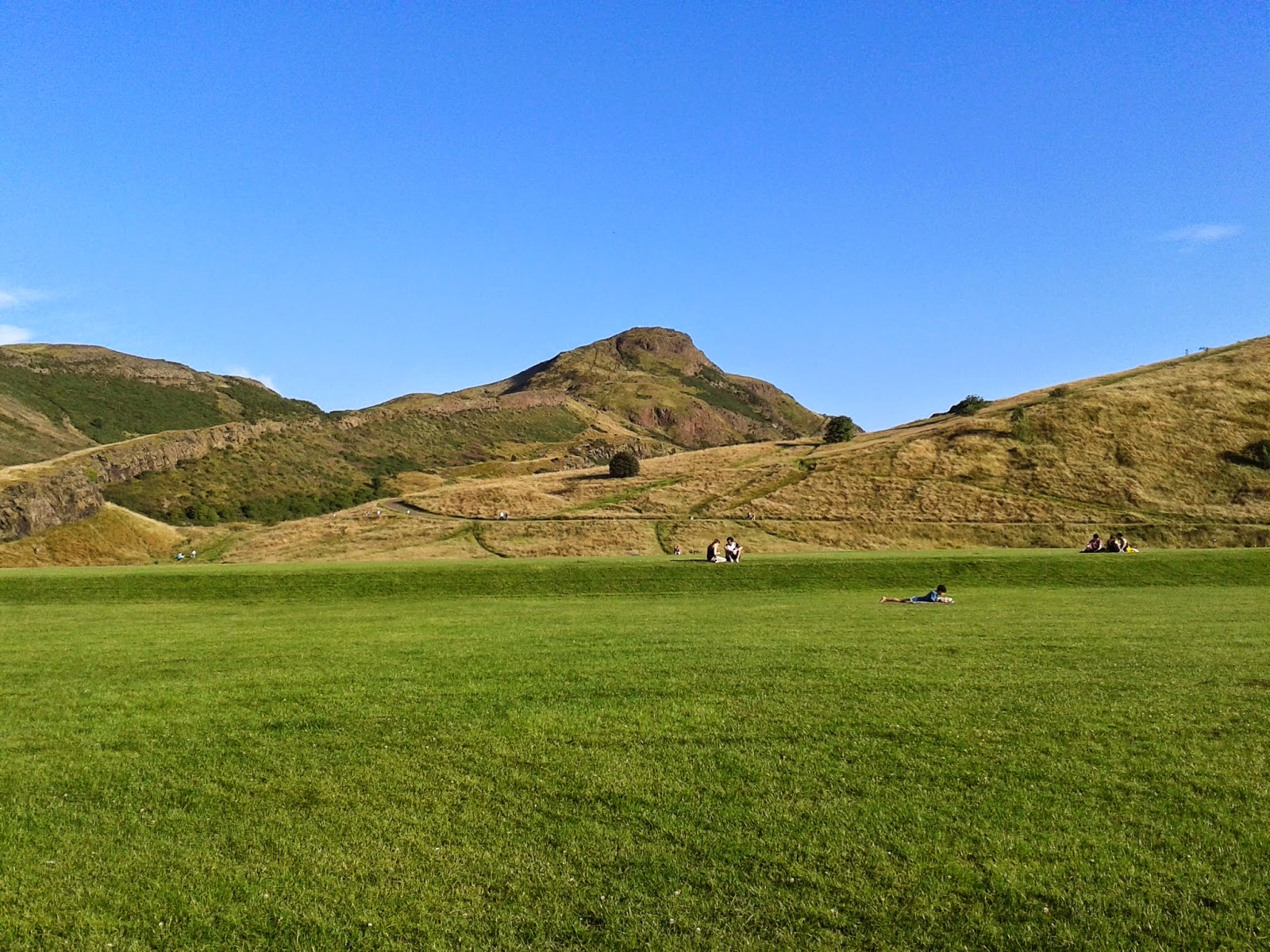 Our walk is at an end. I hope you have enjoyed it for I never fail to see something different every time I follow the Radical Road.

Posted by Elisabeth Ritchie at 23:32