At this time of year the High Street, the upper section of the Royal Mile, is bustling with tourists. The solid buildings lining the road look as if they have been there for centuries and could still be there in another 500 years. In fact, structures have frequently been knocked down and replaced and, in fact, many are built on top of each other, as we described in an earlier post: Exploring the secrets of the Royal Mile.  Indeed, what we see in much of the Royal Mile today is lucky to have survived. By the end of the nineteenth century, the Old Town  was an insanitary slum. Developers had started demolishing some of the most ancient and crumbling tenements, which had towered over its overcrowded squares and squalid closes for centuries.

Fortunately for us, a man of great foresight and imagination, Professor Patrick Geddes (1854-1932), halted the process of dilapidation and destruction and saved some great architectural treasures for the nation.

The area we are going to walk around today is associated with this pioneering work on architectural restoration and civic regeneration. Geddes thought that the ancient buildings of the Old Town, many of which went back to mediaeval times, should be rehabilitated and take on new uses as living buildings. To prove his point he and his wife moved into one such flat in James Court in order to prove that even very old buildings could become pleasant family homes. 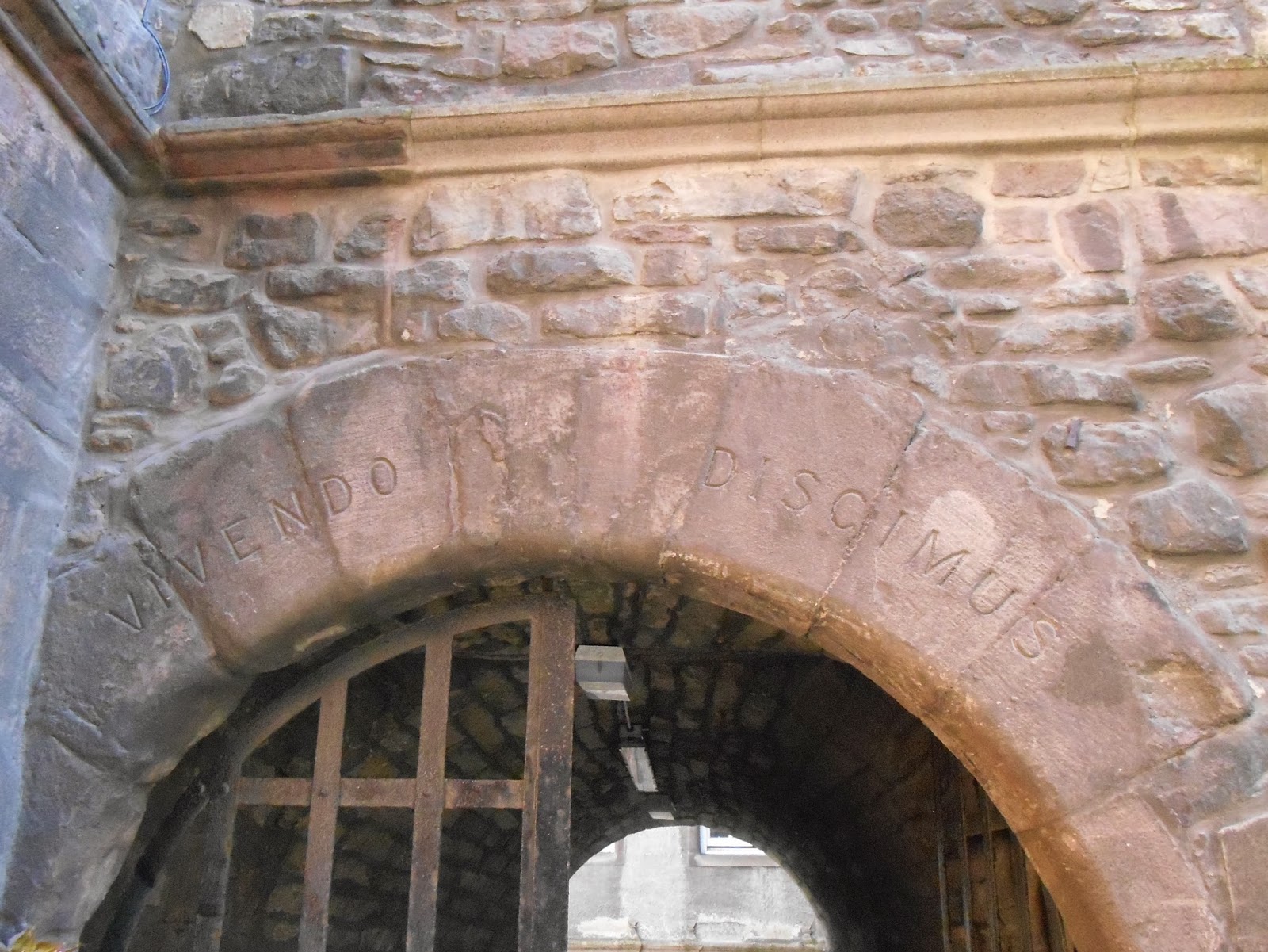 Geddes carried out renovations up and down the Royal Mile, saving magnificent buildings like Chessel's Court, Huntly House, Moray House, and Whitehorse Close, which you can read about in an earlier post: At the foot of the Royal Mile: Abbeyhill, Holyrood and the Canongate. Many of the rescued buildings, like Chessel's Court, became family homes, great mansions being sensitively converted into individual flats. Go down any close in Edinburgh and you will see people living right at the heart of a World Heritage Site. Some grand houses, like Huntly House, became museums. Moray House became an internationally famous teacher training college, now part of Edinburgh University. Others buildings became student accommodation (lucky students!), for at that time Edinburgh University had no hostels.

At Riddle's (or Riddell's) Court you can pick up a leaflet setting out a Heritage trail which takes you to the rescued buildings: nineteen in all. Patrick Geddes' motto - vivendo discimus (by living we learn) - is carved into the arch of the doorway at Riddle's Court, an apt sentiment from a man who did much to teach people about the value of the our inheritance. 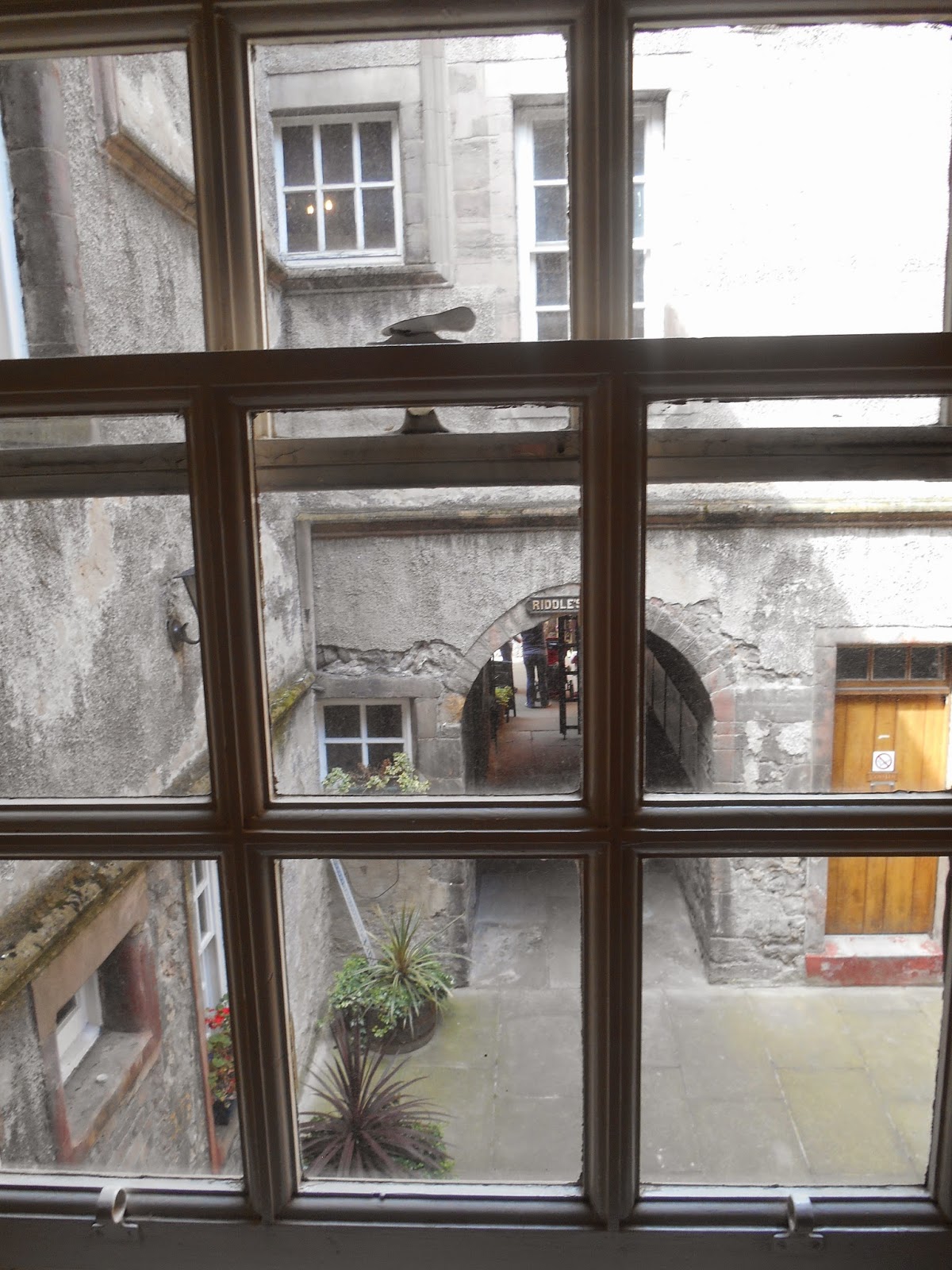 As with most of the grand houses of the High Street, the close by which you reach Riddle's Court is quite a modest low affair, the mansion itself being set well back from the filth and noise of the road. 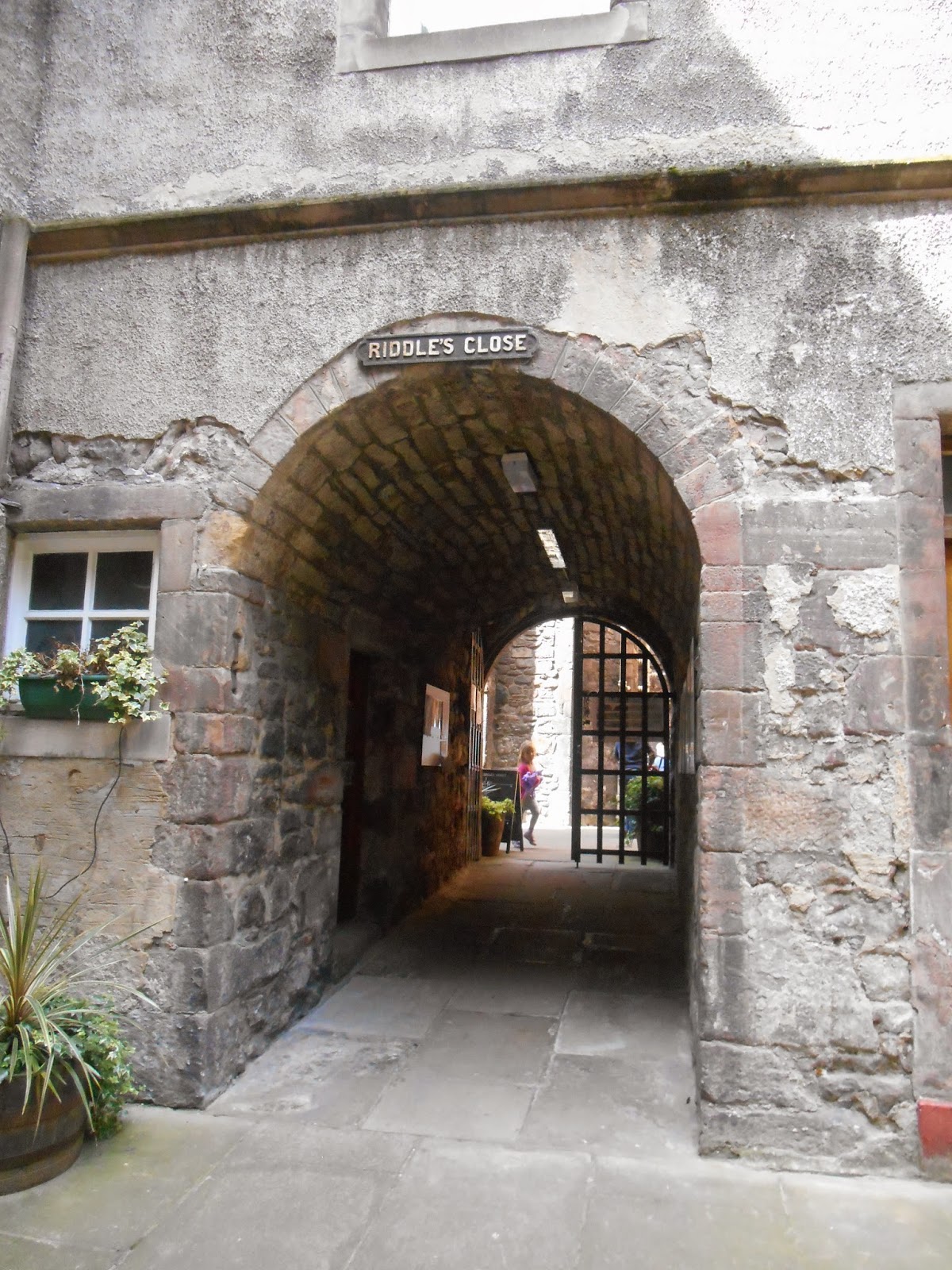 As you might expect, it has been rebuilt, modified and extended many times over the years. The earliest buildings go back to mediaeval times and were largely destroyed during the Rough Wooing of 1544, when the English had attempted to force a marriage between Henry's son and heir, later Edward VI, and Mary Queen of Scots, then just a baby.  The army of Henry VIII of England had sacked Edinburgh and laid waste the Borders.

On this site, in 1590,  Bailie John Mac Morran, the richest merchant in Edinburgh, built the grandest house on the Royal Mile. Only Holyrood House, the Royal palace, surpassed it in magnificence.

Mac Morran extended the existing buildings to make a great house to which he could invite the rich and powerful. Indeed King James VI and Queen Anne of Denmark dined at a banquet here in 1598. Sadly for Mac Morran, he came to a violent end when the pupils from the High School rioted over reduced holidays. 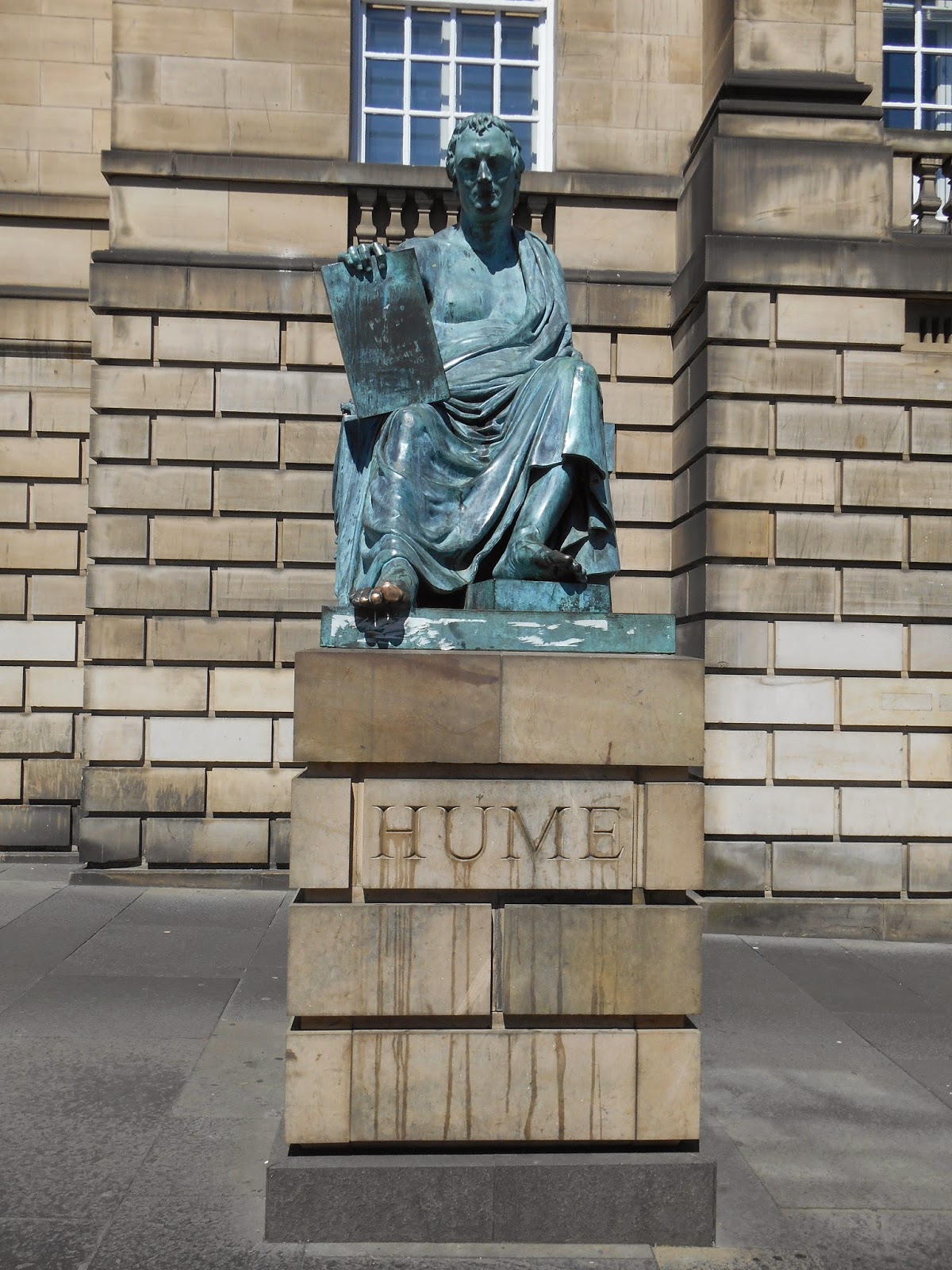 In 1616, Alexander Seton, Chancellor of Scotland lived at Riddle's Court, which at that time had a beautiful formal garden. Various other aristocrats and merchants lived here over the years, including David Hume, the renowned philosopher of the Scottish Enlightenment, whose statue sits on the High Street down the hill and on the opposite side of the road from Riddle's Court. The house, however, takes its name from George Riddell, a craftsman and burgess of Edinburgh, who rebuilt the land in front of the house in 1726. 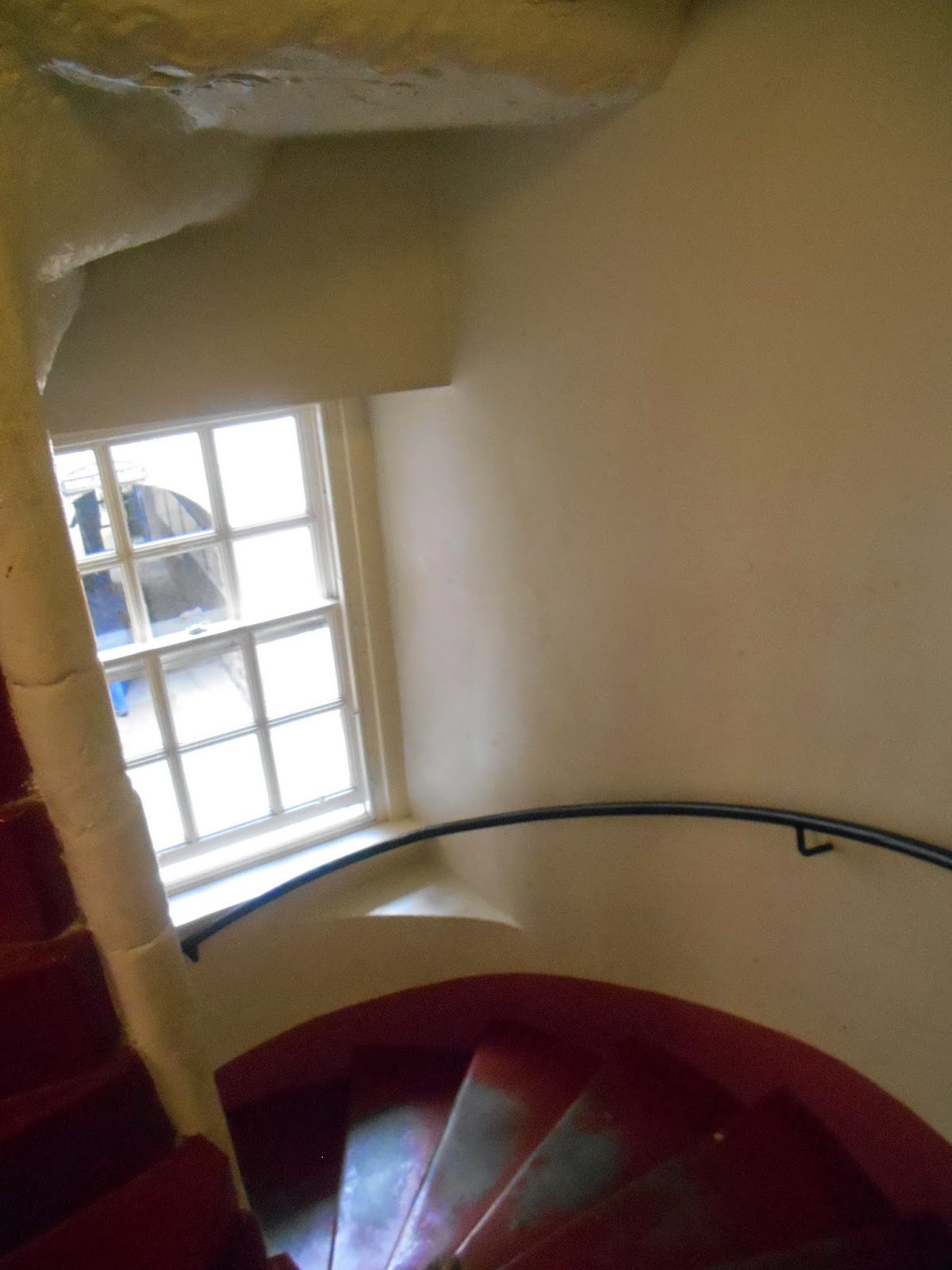 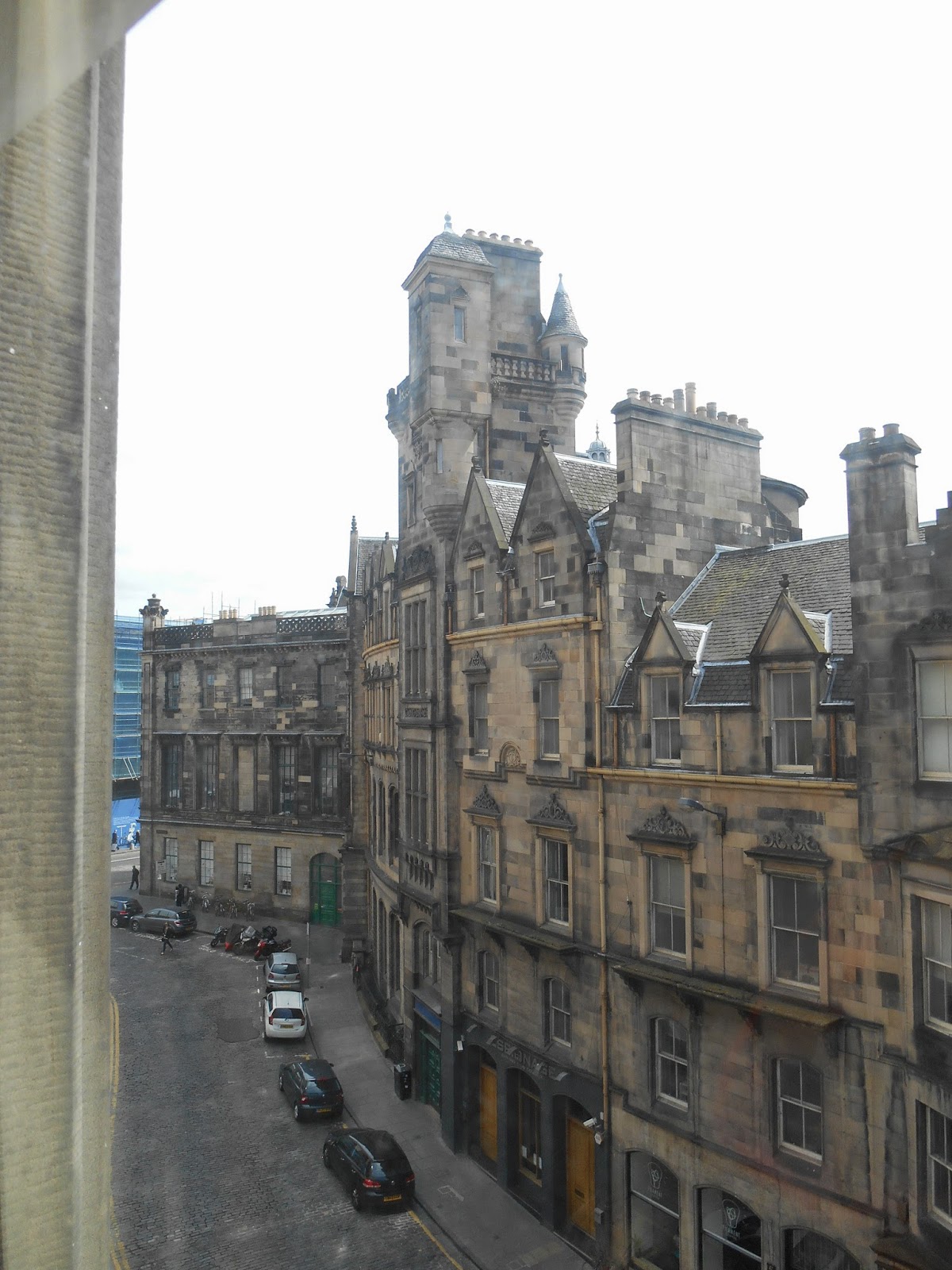 Riddle's Court fell into disrepair in the nineteenth century. Victoria Terrace and Street were built below it, cutting through the garden, which now no longer exists. Ironically, Victoria Terrace is now considered one of the most attractive streets in the Old Town. You can peer down at it out of the windows of Riddle's Court.  Despite the renovations of Patrick Geddes who converted it for use as a hall of residence, the building fell into disrepair again in the late-twentieth century. The Scottish Historic Buildings Trust rescued it in 2005 and is currently raising money to renovate it. A few rooms are open to visitors and the building as a whole is used by the Workers Education Association.


To reach the formal rooms, you climb the traditional spiral staircase. 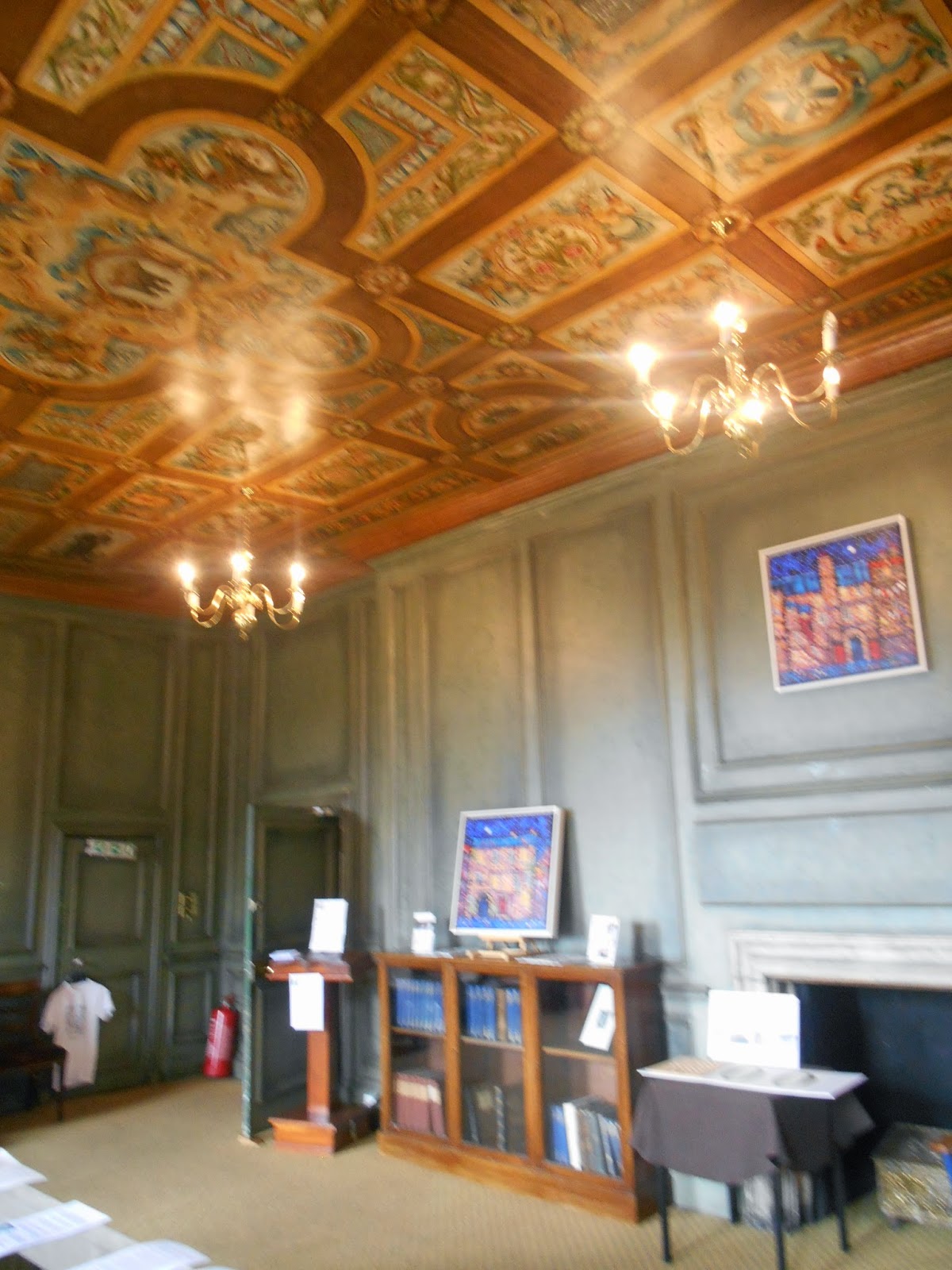 There are sixteenth century painted ceilings in the building but I haven't seen them. One of the rooms open on the day I visited had a splendid ceiling painted in 1895 for Patrick Geddes (right). On the ceiling are represented key figures in the history of Riddle's Court. The room next door has a lovely plaster ceiling. 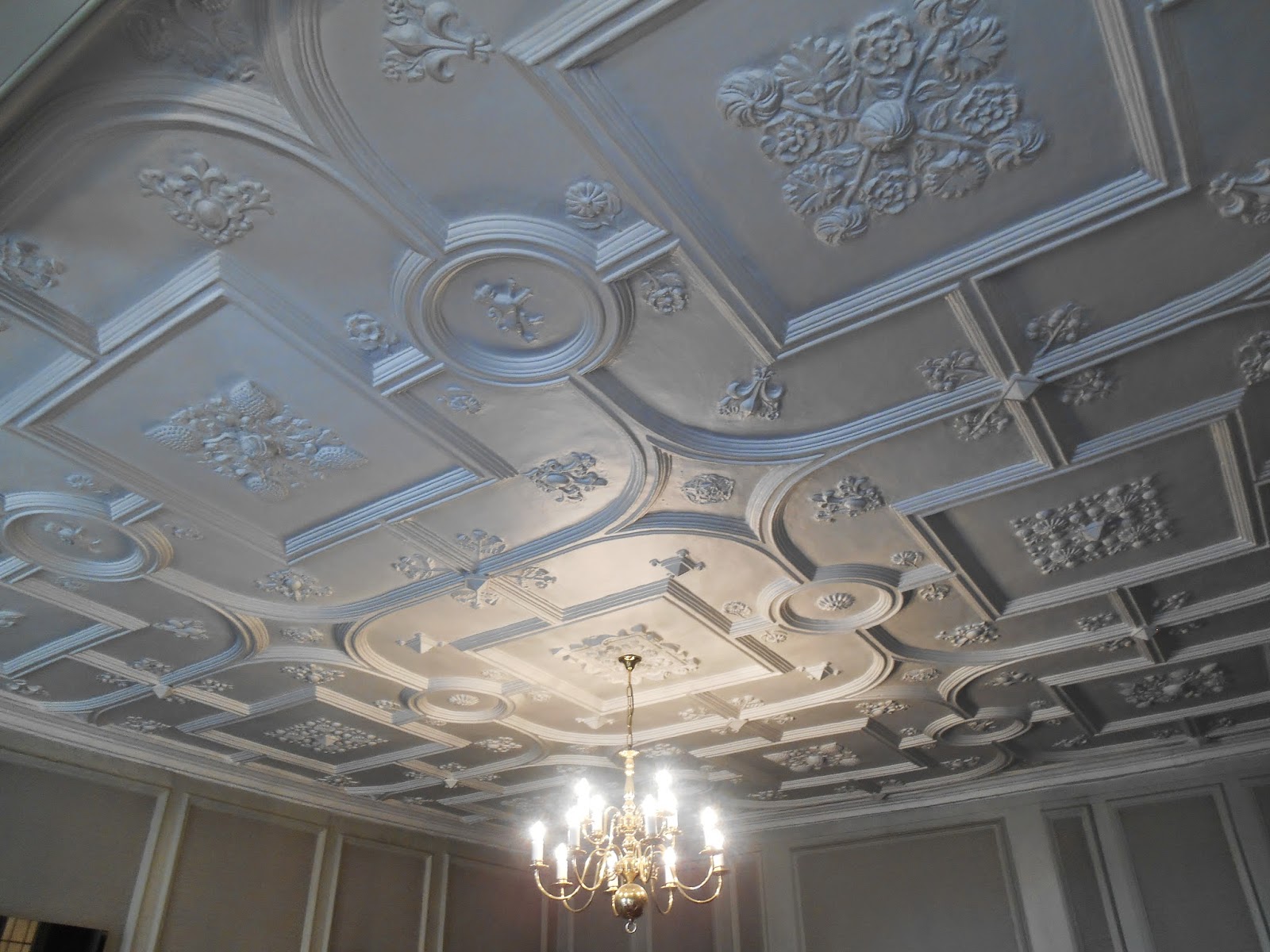 Entry is free and the guides are very welcoming. By visiting Riddle's Court you are supporting the renovation of one of the greatest houses in Edinburgh's Old Town.

On coming out of Riddle's Court you see Gladstone's Land across the Lawnmarket, with an arcade behind two arches. This sixteenth century merchant's house used to be lived in by different families on each of the various levels. The ground floor was the shop. The middle floors were occupied by the prosperous landlord, Thomas Gledstanes and the upper floors by the poorest tenants of all. It has been beautifully restored and furnished by the National Trust so that you gain a real sense of what it must have been like to live in it all those years ago. However, they don't allow photography, so no pictures, I'm afraid.

As you go up the hill, you come across a Victorian Gothic church, originally called the Tolbooth Kirk, built in 1844 by the renowned architects Graham and Pugin. It has the tallest spire in Edinburgh and stands opposite the General Assembly. As services were held in Gaelic, it came to be known as Highland Tolbooth. The church went into disuse in 1981 when it joined with Greyfriars Kirk. Twenty years later, the empty church building gained a new lease of life as The Hub, which provides a restaurant, performance and exhibition space and ticket offices for the Edinburgh International Festival. 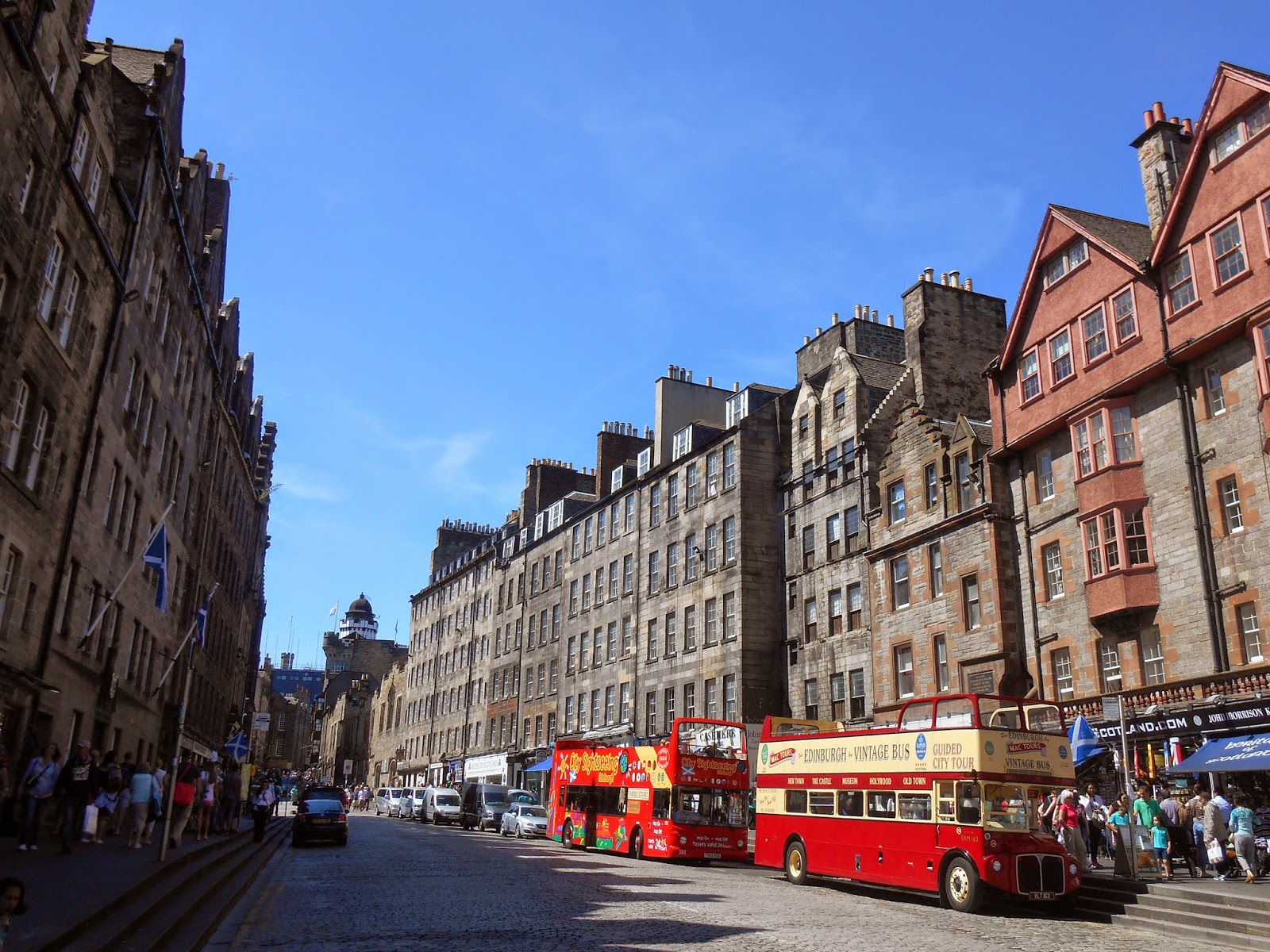 You may just be able to make out on the right hand side of both the previous photographs The Outlook Tower, an octagonal dome on the top of  a Victorian structure which itself was built on reconstructed 17th century tenements. This building, also rescued by Patrick Geddes, now holds the Camera Obscura.

A wonderful Geddes-inspired building stands at the top of the Royal Mile: Ramsey Court. It is best seen from Princes Street Gardens. It incorporates the house in which the poet Allan  Ramsey lived in the 1740s and was developed in the Scottish Baronial style to contain a hall of residence and a block of flats for Geddes himself and other occupants. Today it contains a highly desirable set of apartments for those who are not disturbed by the one o'clock gun or, in August, the sounds of the Military Tattoo from the castle next door.

Coming back down the hill, you see wynds and closes opening off the street between the buildings. 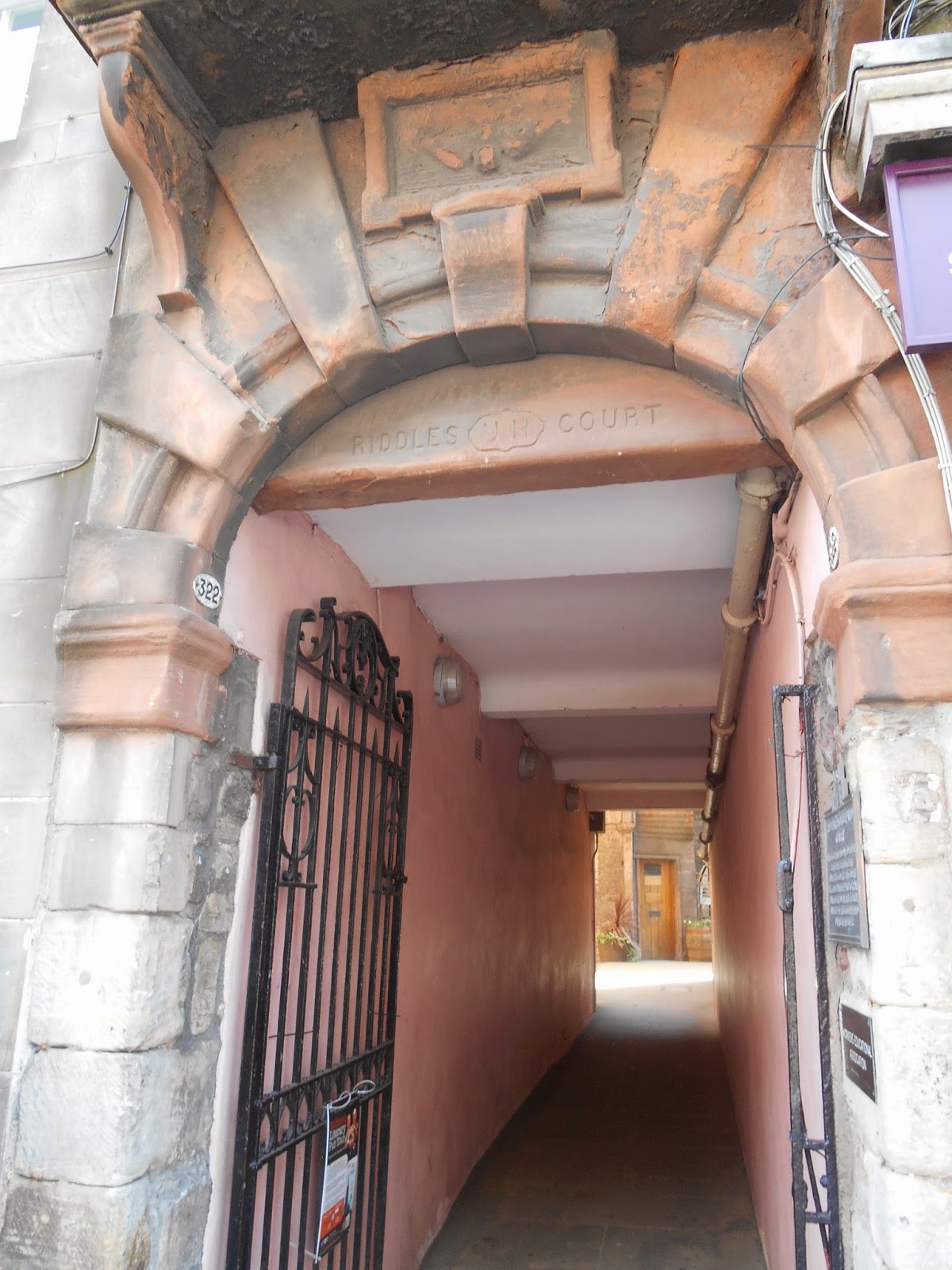 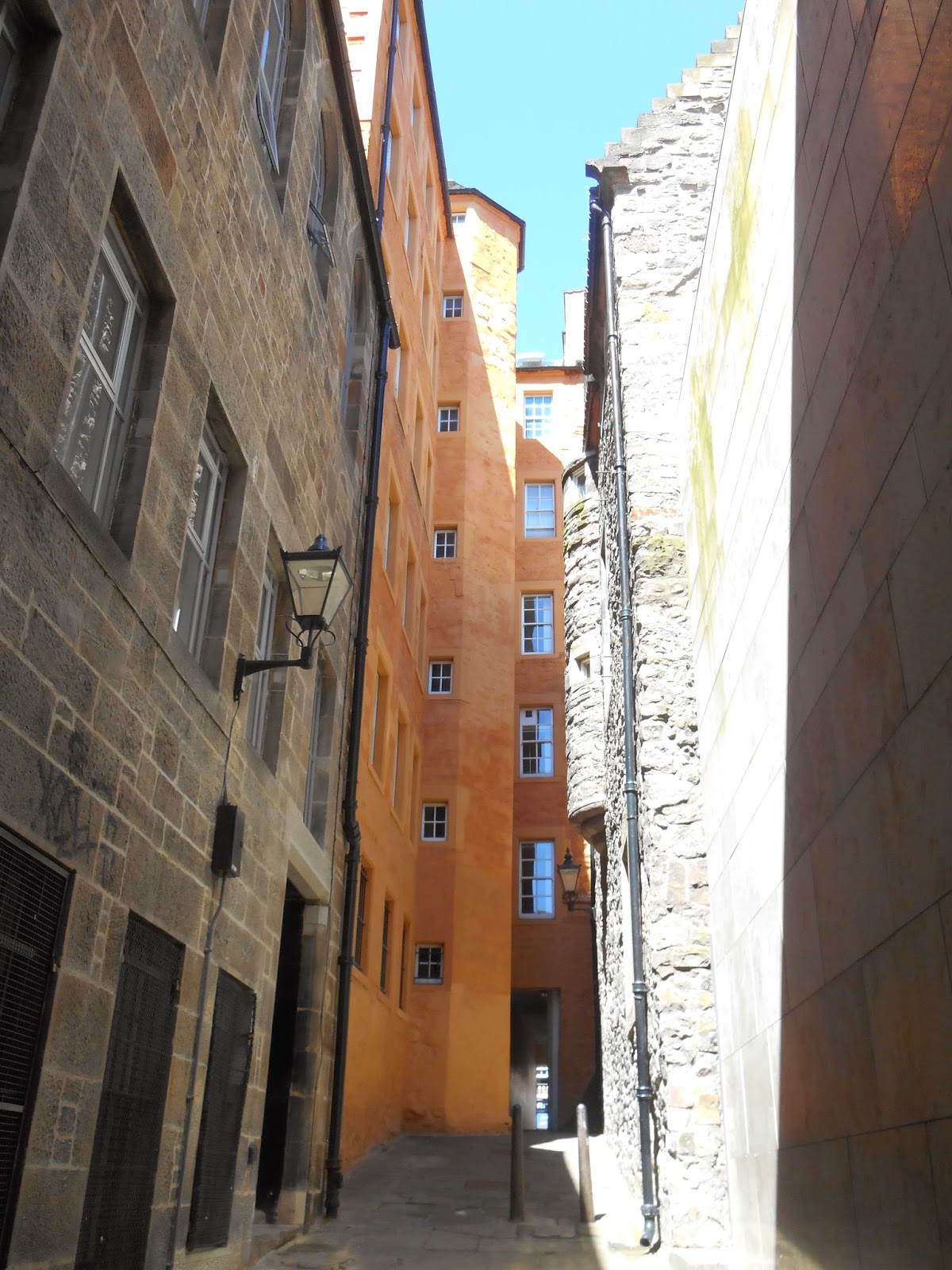 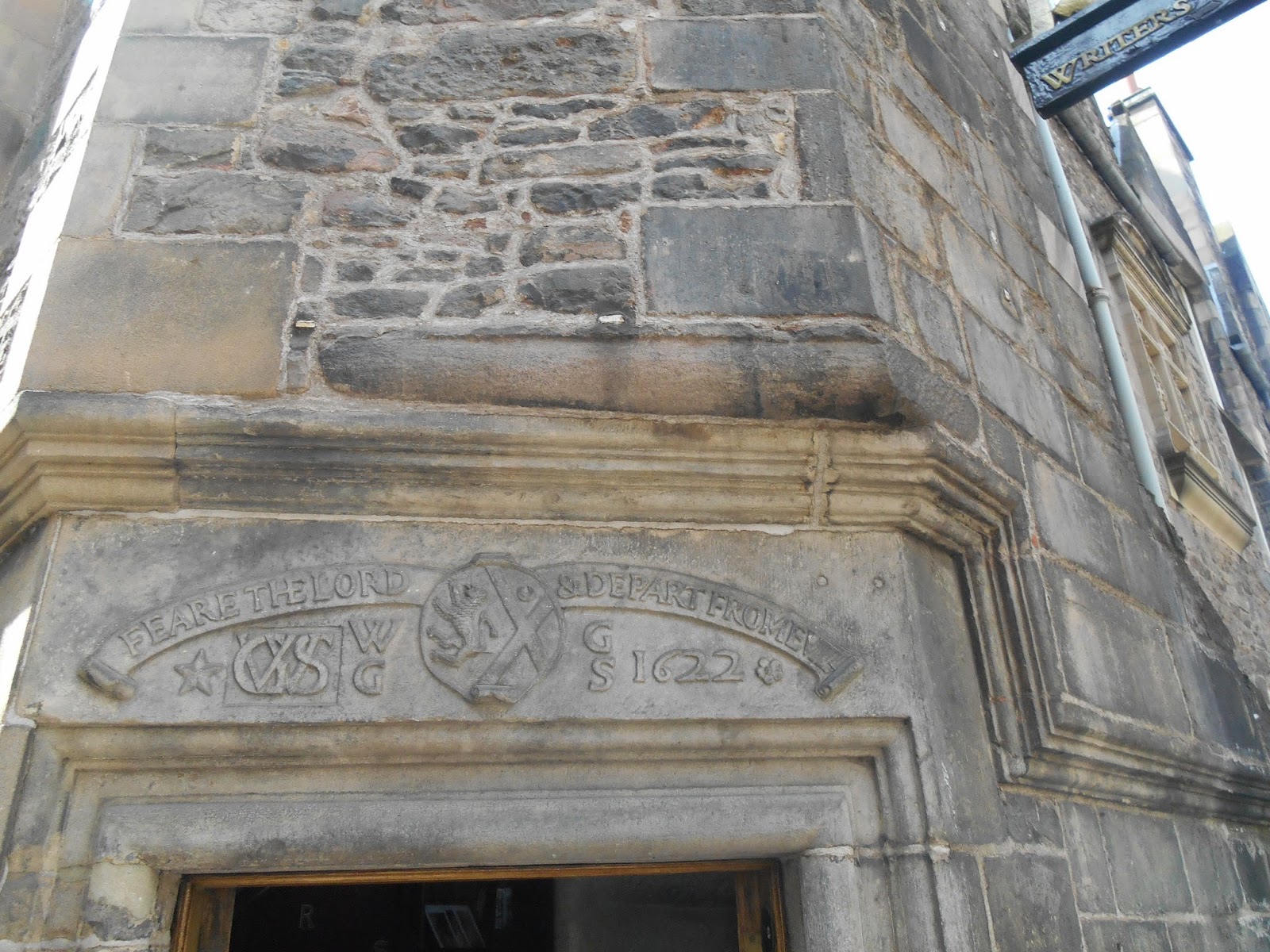 One of the most attractive of these closes is Lady Stair's Close. The House was built in 1622, fell into disrepair and became one of the first buildings to be rescued by Patrick Geddes. The initials of the first occupants are carved above the door, with a motto Feare the Lord and depart from evil. The internal staircase has uneven steps to deter burglars. The building is now used as The Writers' Museum and focuses on the work of Robert Burns, Robert Louis Stevenson and Sir Walter Scott. 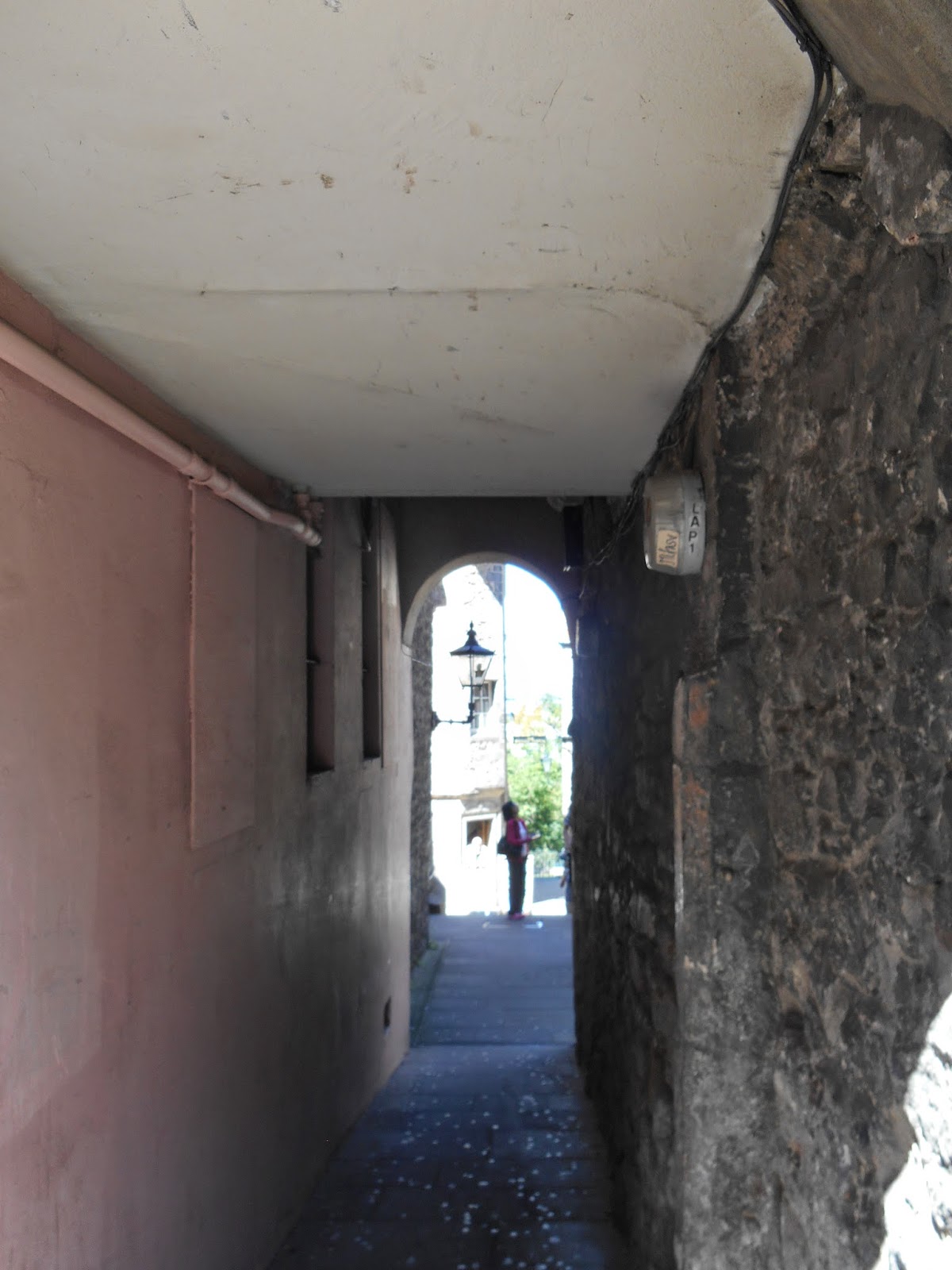 Coming out of Lady Stair's Close, and turning left you see the Deacon Brodie pub. The pub commemorates the original model for RL Stevenson's story of Dr Jekyll and Mr Hyde, though in fact, Deacon Brodie used to live in the building opposite. This is now a cafe with a vaulted ceiling built in 1420. Deacon Brodie's apartment is the one with an elaborate ceiling constructed in 1645. Diagonally opposite the pub you can see a brass H on the pavement which marks the spot where the gallows stood and where Deacon Brodie was hanged in 1788. 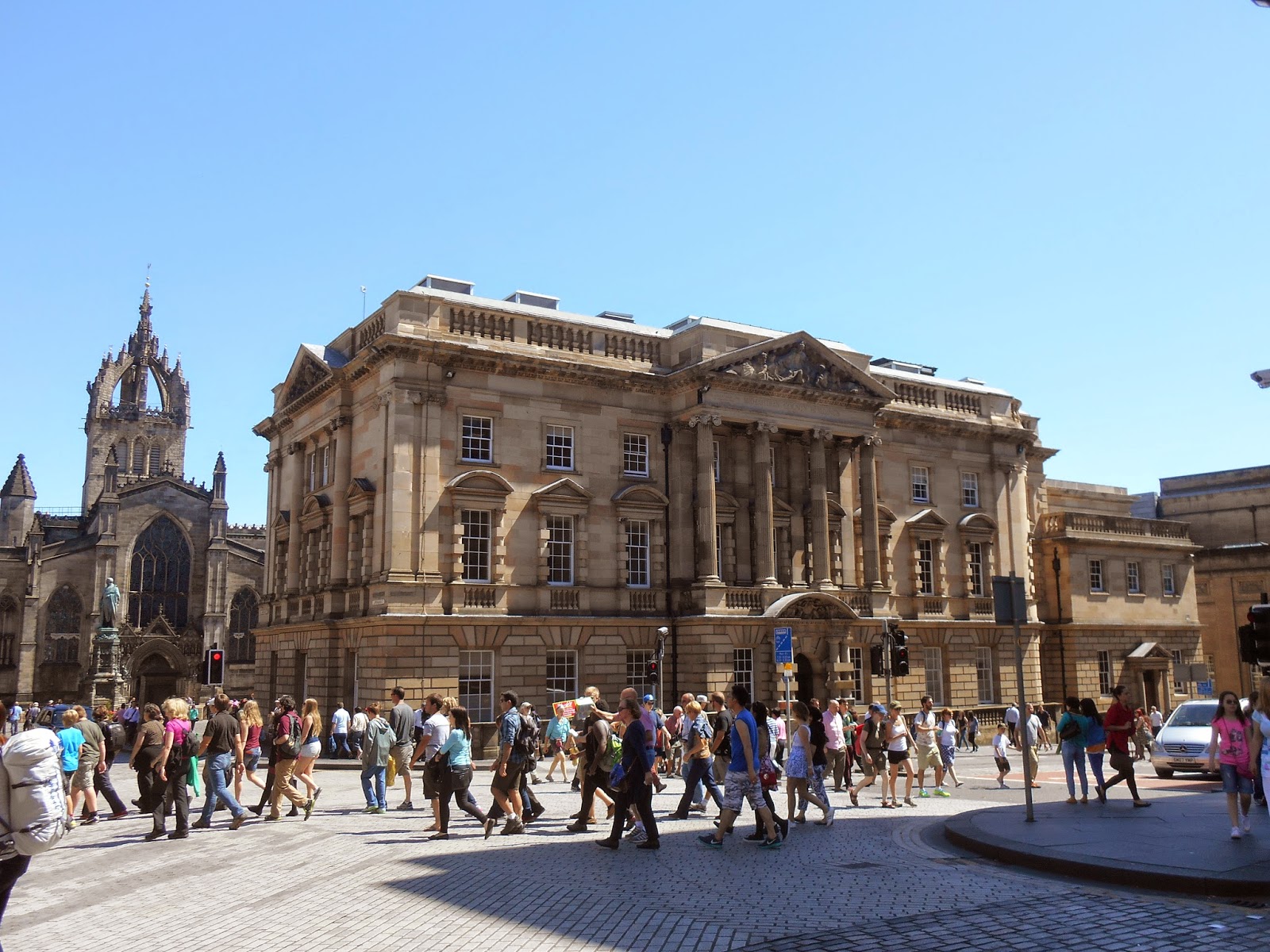 Look left and admire the great Georgian building of the Bank of Scotland on the Mound. Opposite it, on George IV Bridge are the very grand Edinburgh City Council offices.

Take your time walking down the hill. Ahead of you is St Giles and there are more wynds and closes to explore all around you. 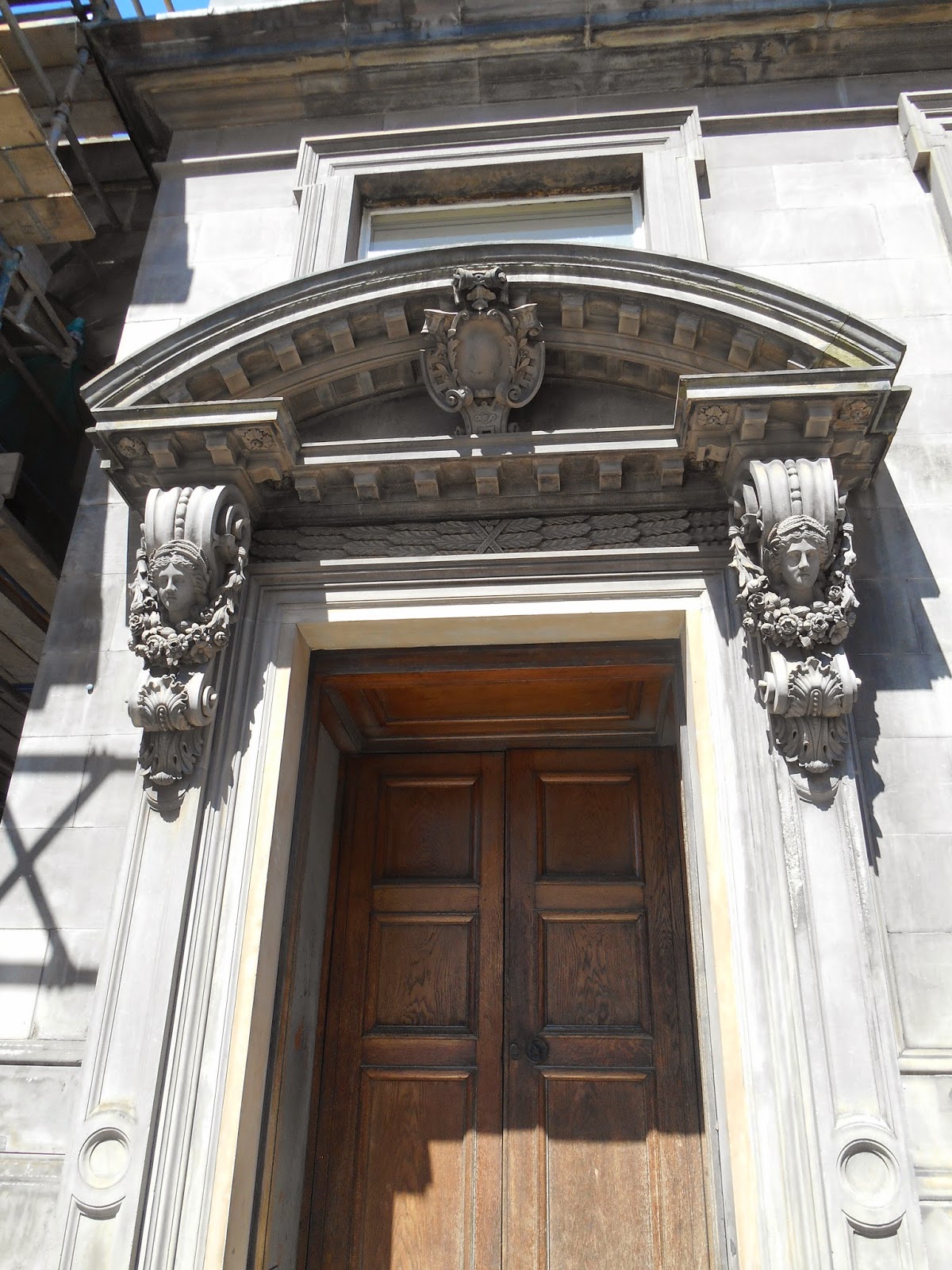 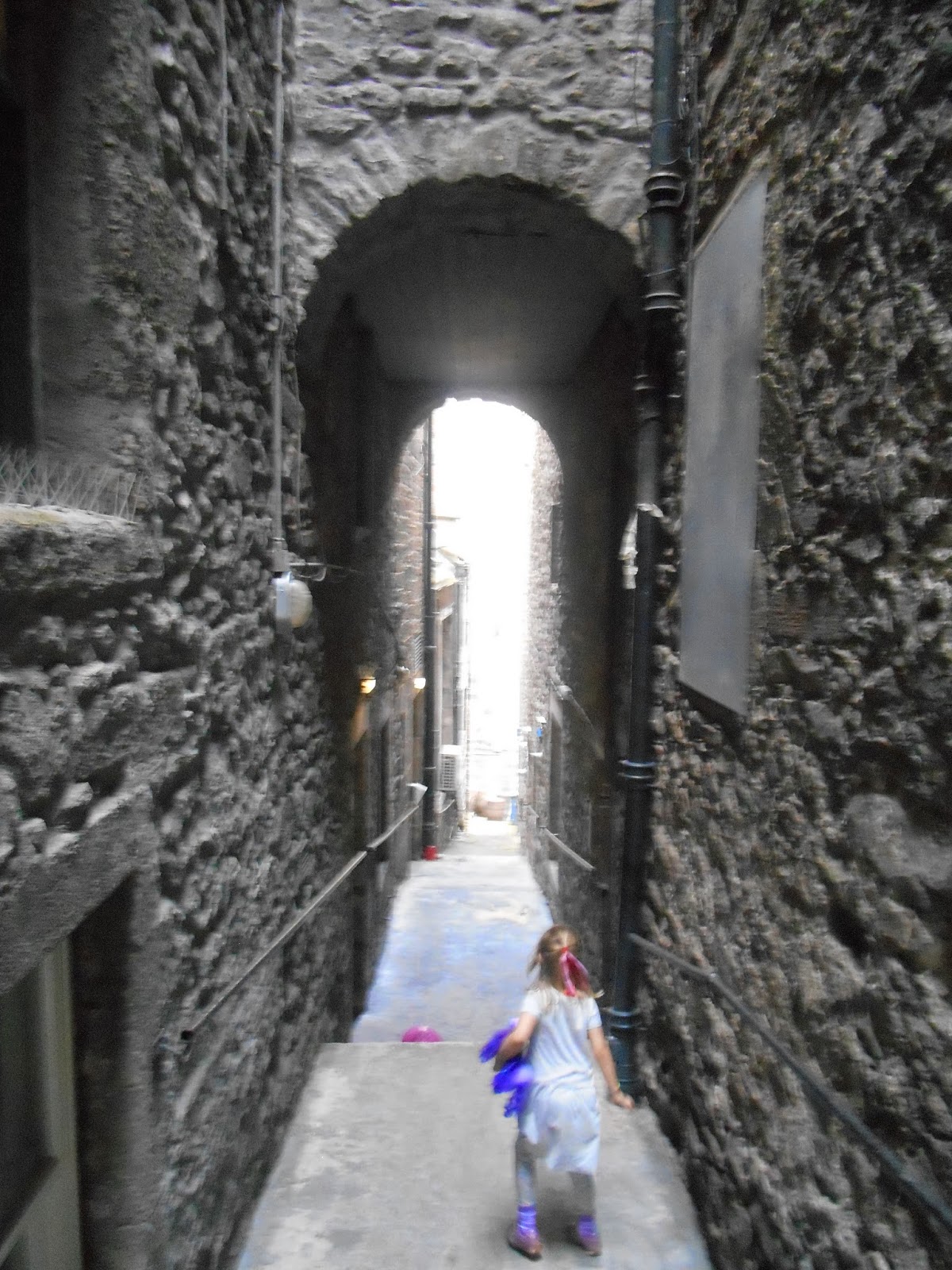 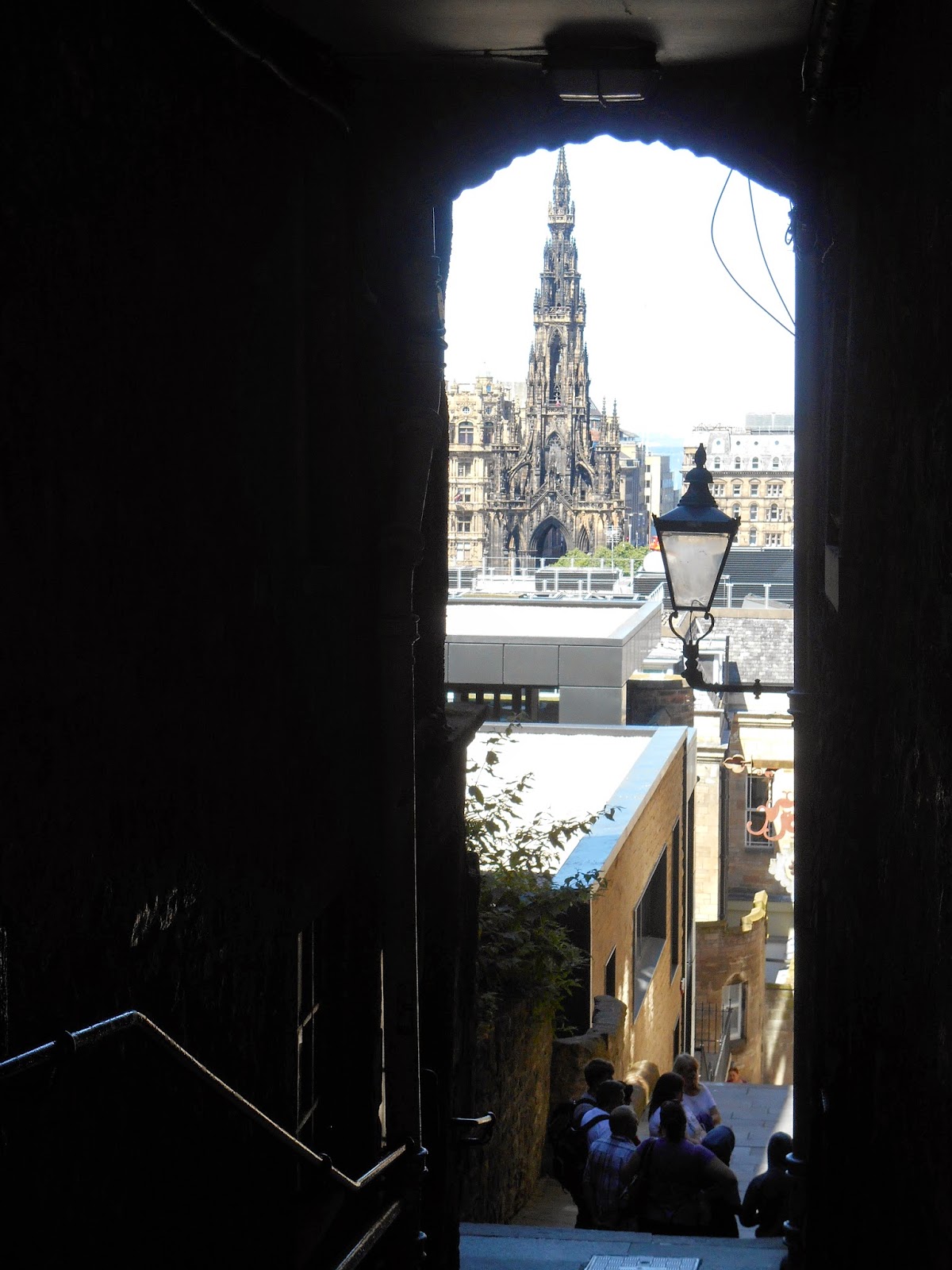 As you walk, consider that if it were not for the work of men like Patrick Geddes and their influence over others, many of the wonders you see round you would just no longer exist.

Posted by Elisabeth Ritchie at 21:38