There can be few Scottish churches which have influenced the course of Scottish history quite so significantly as Greyfriars Kirk. 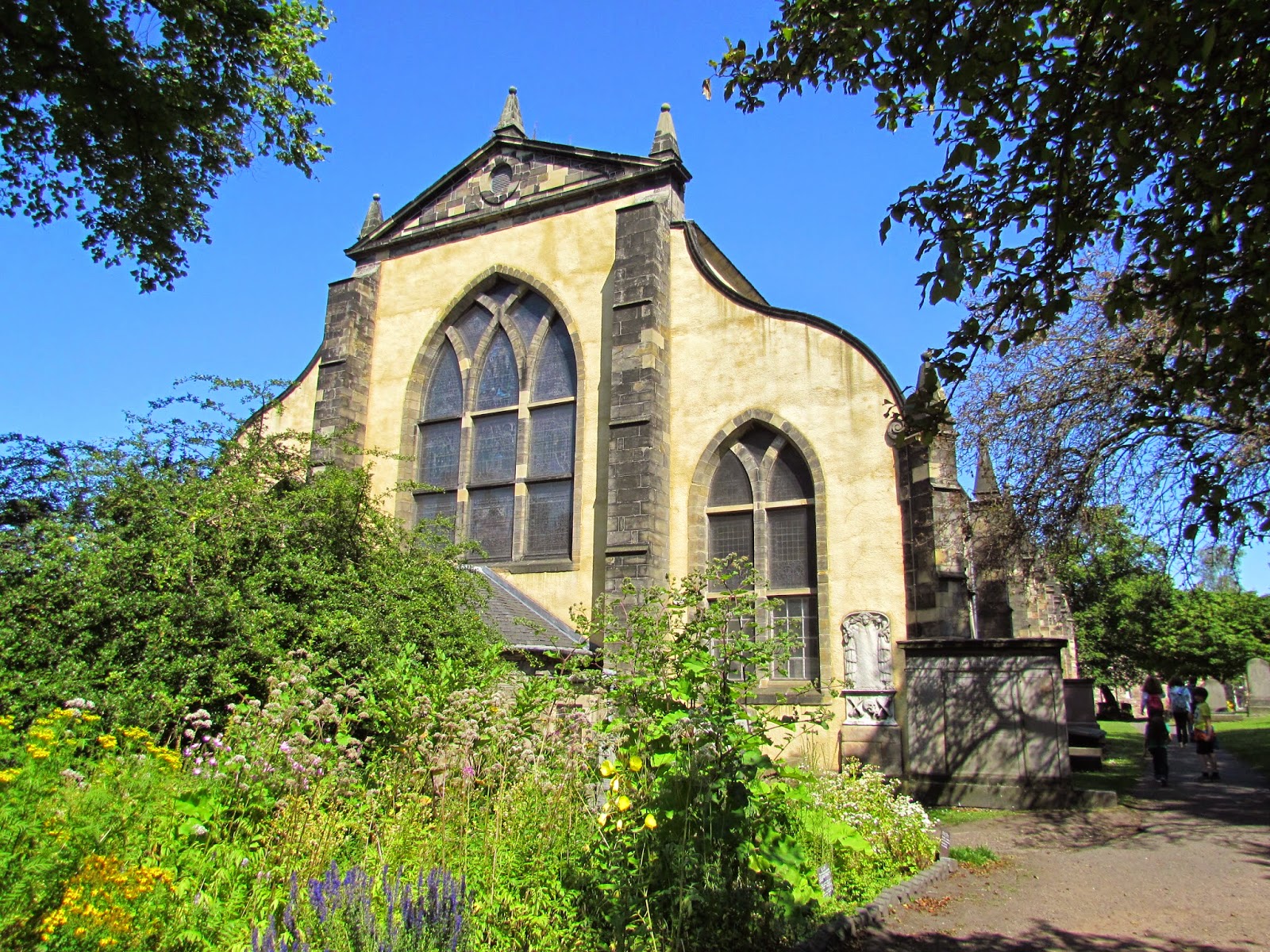 Perhaps only St Giles, half a mile or so away, can dispute my claim The High Kirk of Edinburgh, where Jenny Geddes threw her stool at the bishop in protest at the use of the English prayer book, sits on busy Parliament Square, scene of political struggle and opposition to authority. In contrast, the beauty of Greyfriars' setting, surrounded by herb gardens, wild and cultivated flowers and ancient tombstones, suggests a peacefulness which belies the rebelliousness of its past. 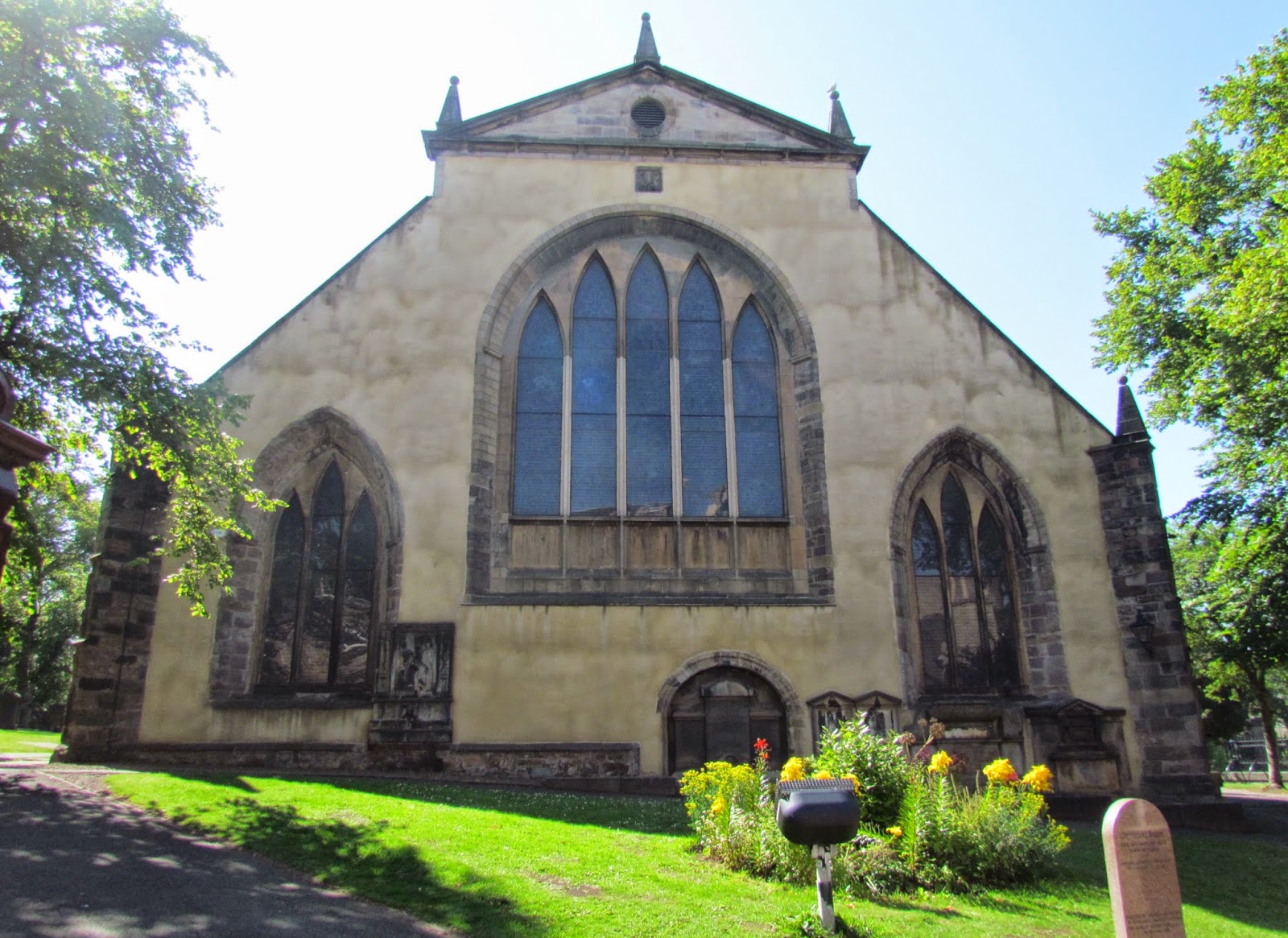 The name Greyfriars bears the memory of a Franciscan friary which stood downhill from the current church building, at one end of the Grassmarket. The current church stands within the friars' garden. It has been attractively planted by members of the Grassmarket project, a support group set up by the current Greyfriars congregation for vulnerable members of society, with the kinds of herbs and flowers which the friars would have grown and used in their medical work with the poor. The Grassmarket project also runs courses on practical skills and has a very good cafe. 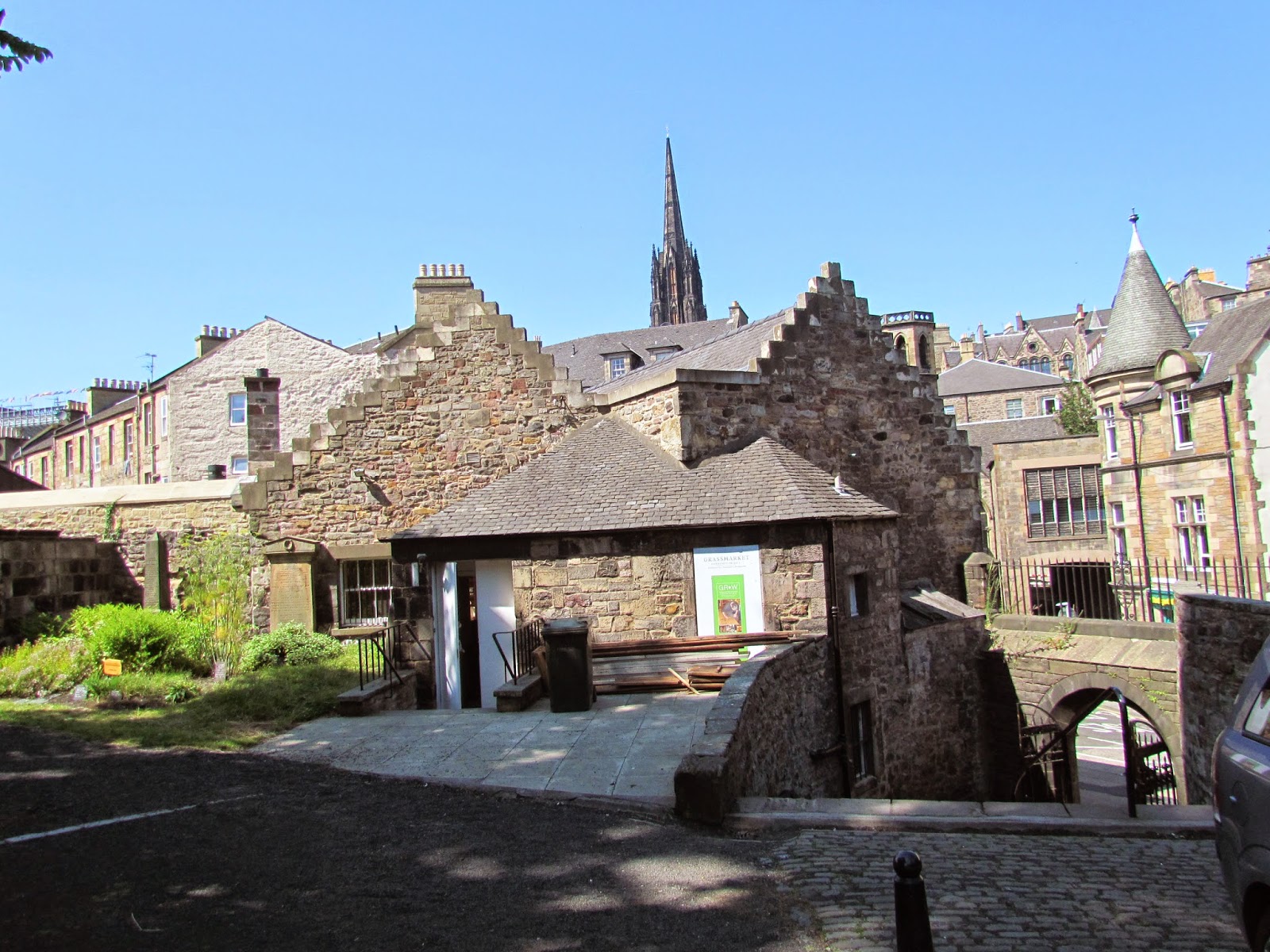 The only other reminder of the friars is a modern representation of the crossed hands of St Francis, with the stigmata, which stands above the cross behind the communion table at the east end of the church. 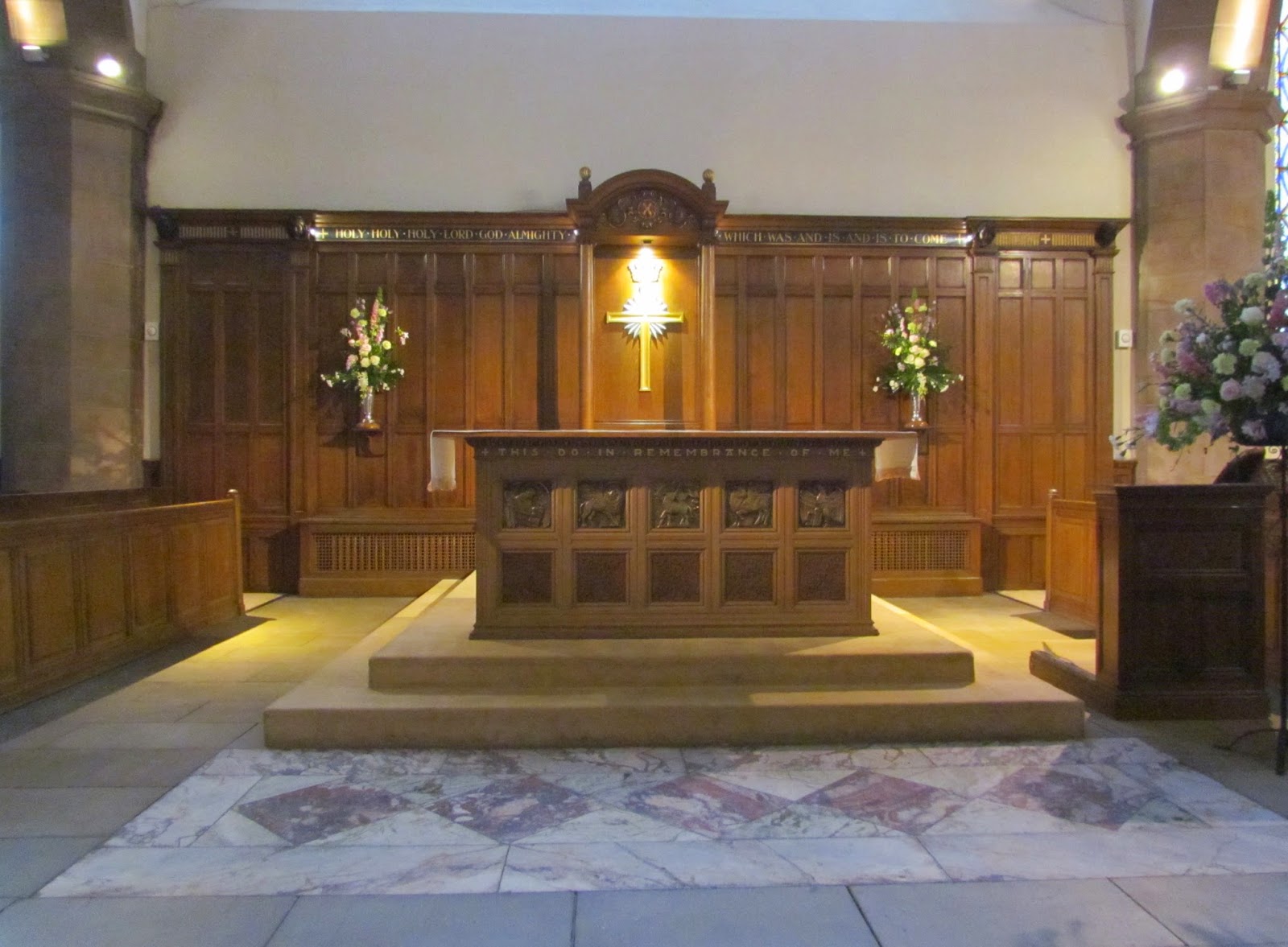 The friary was dissolved in 1558 after being ransacked by a mob of Reformers. Its burial ground lay unused for four years until Mary Queen of Scots allowed the town council to take it over, as the churchyard at St Giles had become dangerously overcrowded.  It was more than sixty years before the current building was erected, the first church to be constructed in Scotland following the Reformation. It stands within the narrow confines of the city walls: 140 acres for 10,000 people. The Flodden Wall, built in 1513 to protect the city from the English after the disastrous battle in which James IV was killed, just skirts the west end of the church. 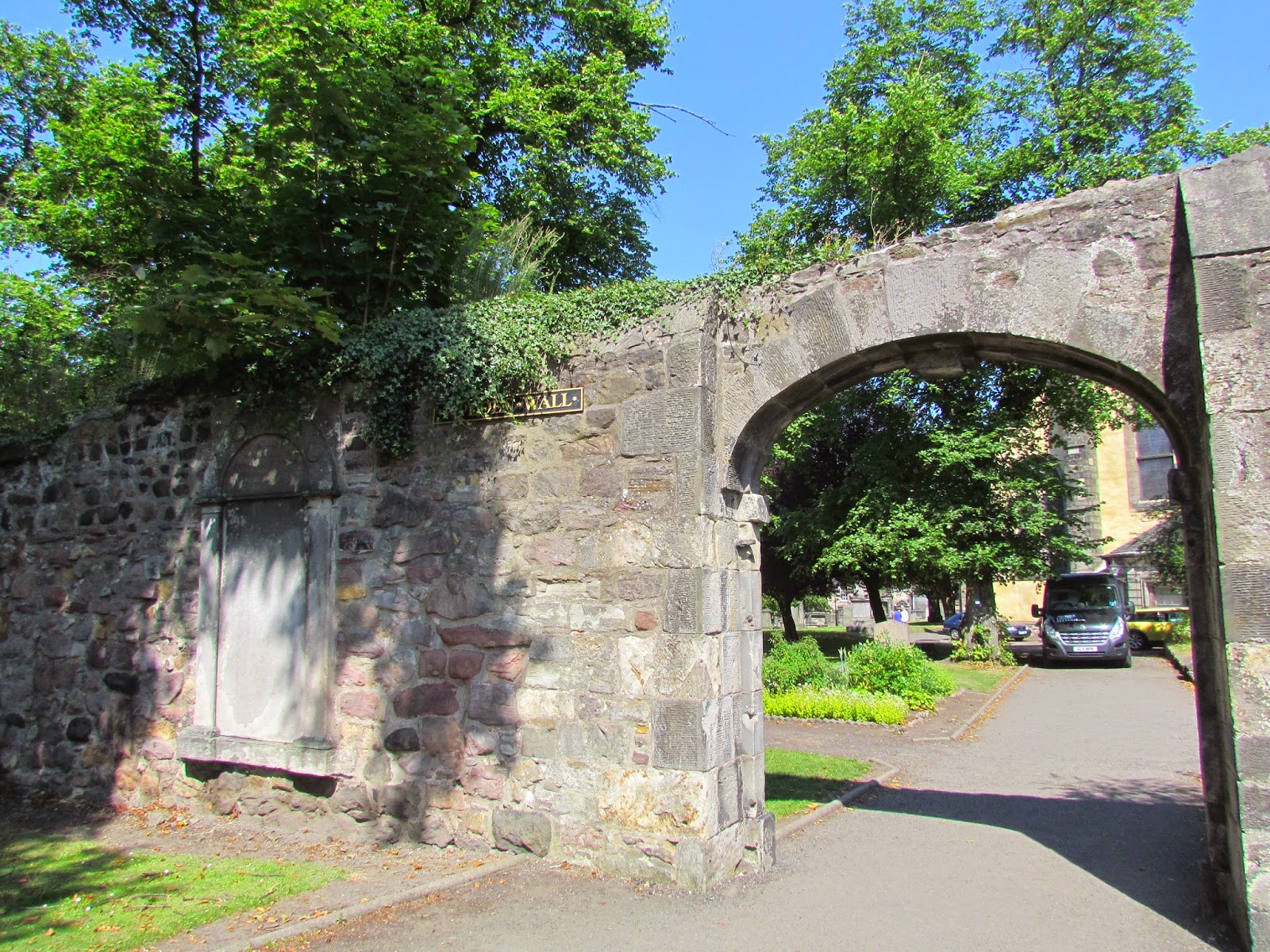 Greyfriars Kirk was opened in 1620, at the same time as the Pilgrim Fathers landed in America, a fitting coincidence for the congregation of Greyfriars proved as strong-minded and independent in their religious beliefs as the English protestants who sailed from Plymouth on the Mayflower. The church building stands solid and plain, like the faith of those who worshipped there. 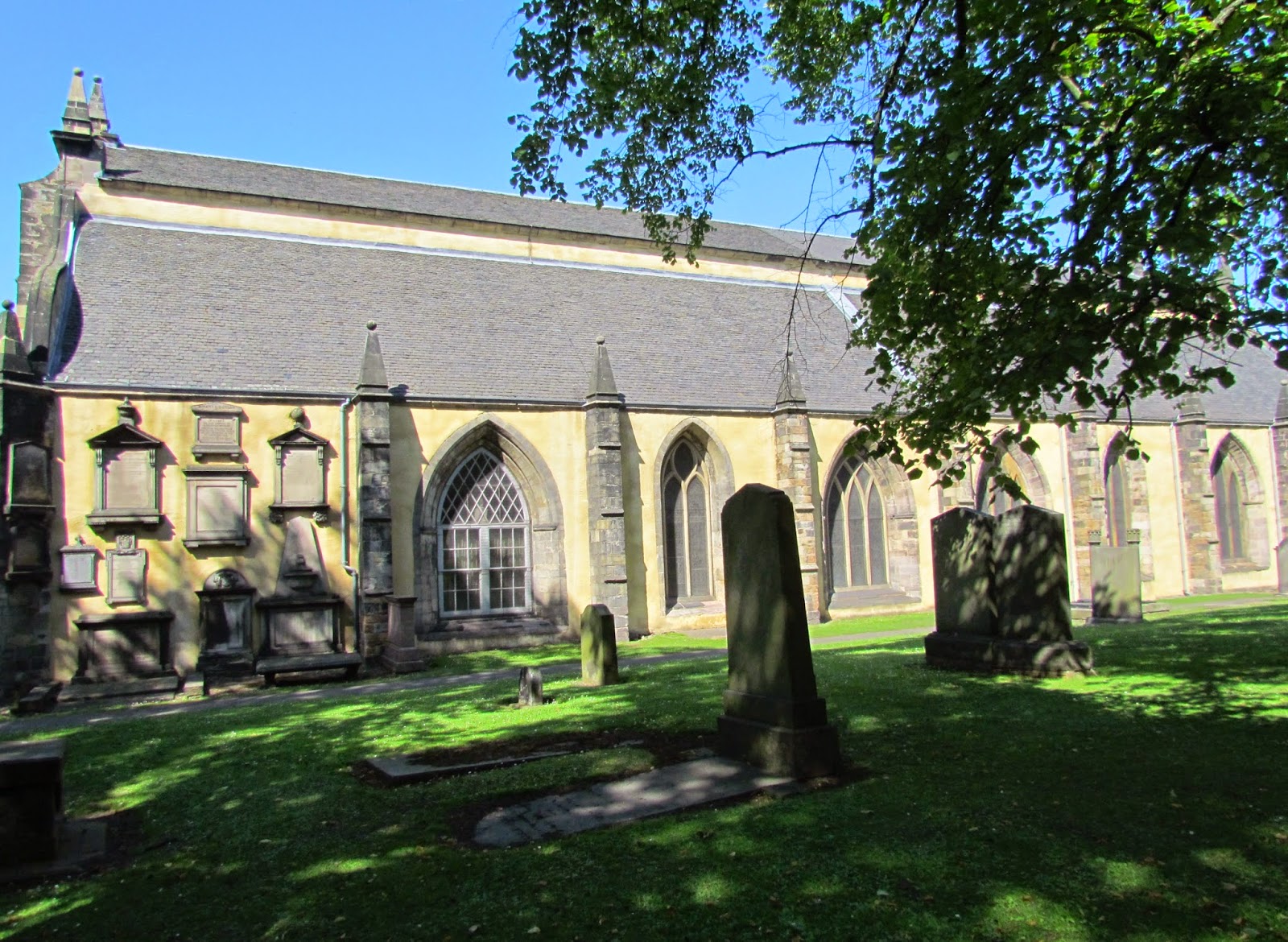 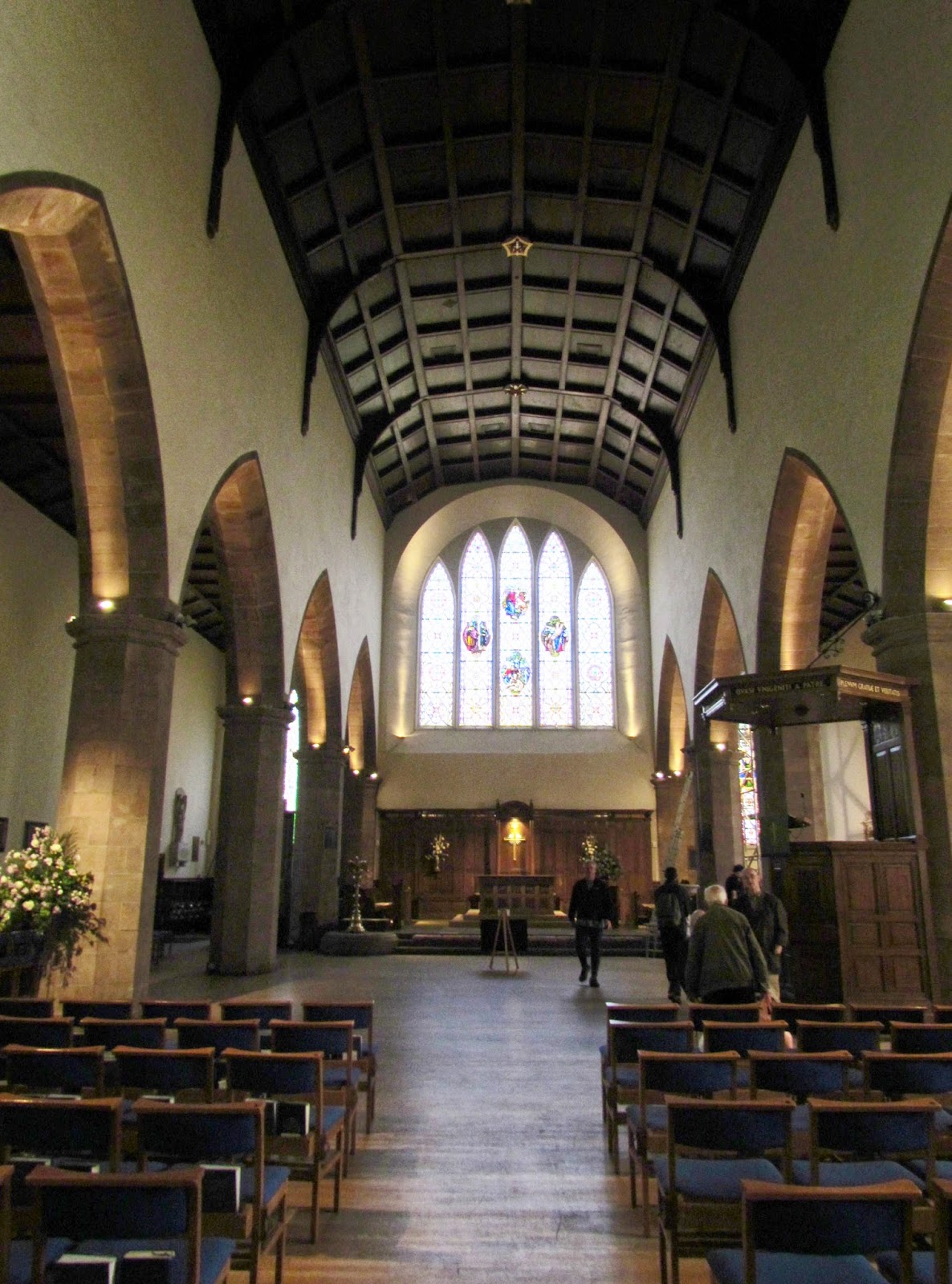 At the time it was built, the interior would have been similarly lacking in unnecessary decoration and, indeed, furniture. Anyway, what furnishings it did have were burnt when Cromwell's English cavalry used it as a barracks in the early 1650s. The interior of the church was burnt again in 1845, though this time because a boiler overheated.

The light would have flooded in through its clear glass windows, reflecting off its unadorned plastered walls. 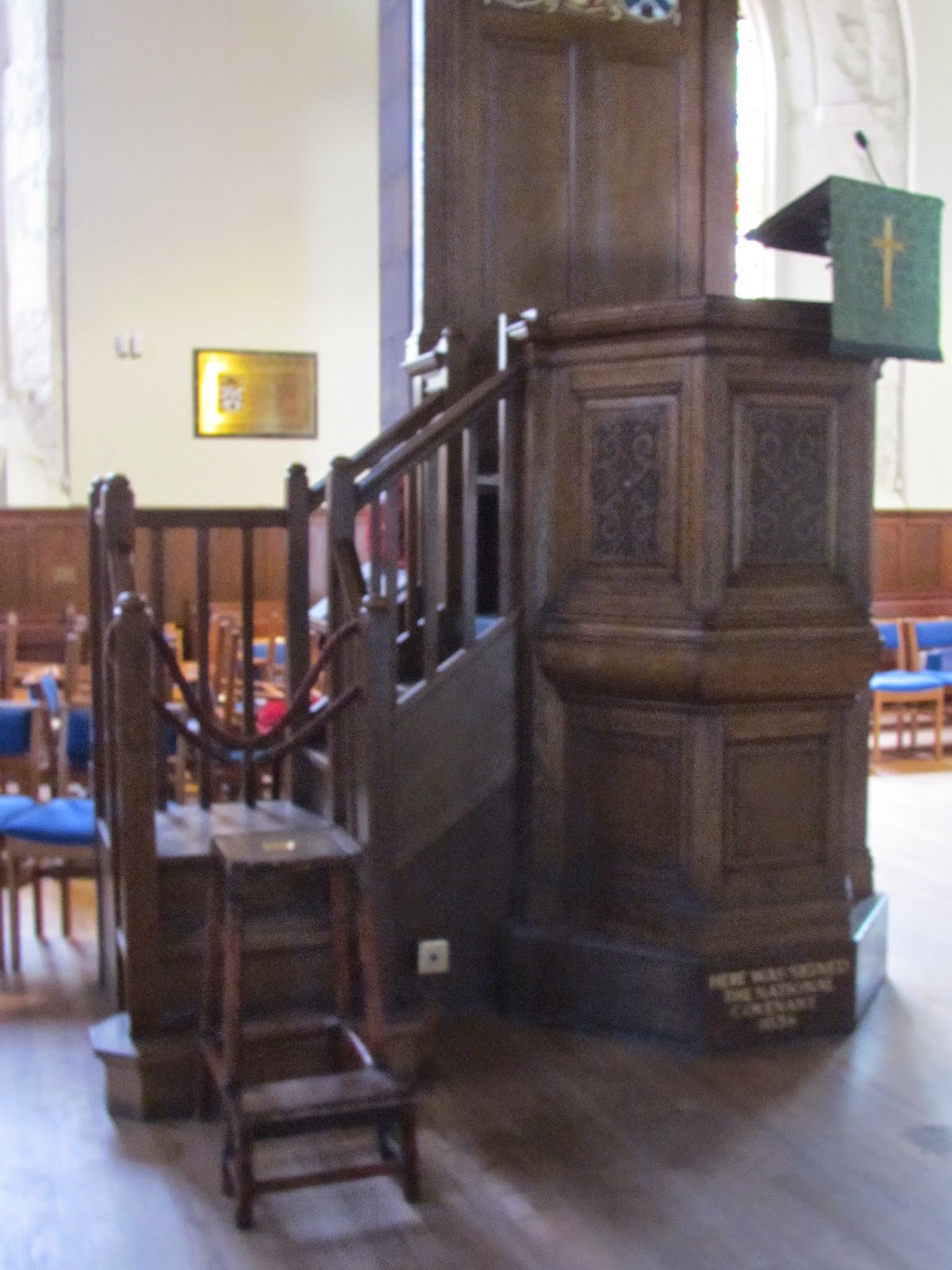 The momentous event which thrust the church into the religious and political limelight was the signing within its walls of the National Covenant of 1638, commemorated today by a simple note on the base of the early twentieth century pulpit. Next to the pulpit you can see the cutty stool - where you sat as a sign of public repentance for your sins. These sins were often to do with sex, like giving birth to an illegitimate child, or committing adultery. However, irregular attendance at church could also result in this humiliating penance. The original of the stool is now in the Huntly House Museum.

Following the Reformation,  bishops had existed alongside presbyterian church government. In 1637, Charles I, however, king of both England and Scotland, decided to introduce a prayer book, anathema to the righteous Protestants of Scotland. There were riots in both St Giles and Greyfriars, Jenny throwing her stool in St Giles and the minister of Greyfriars having to flee from a mob of screeching women. 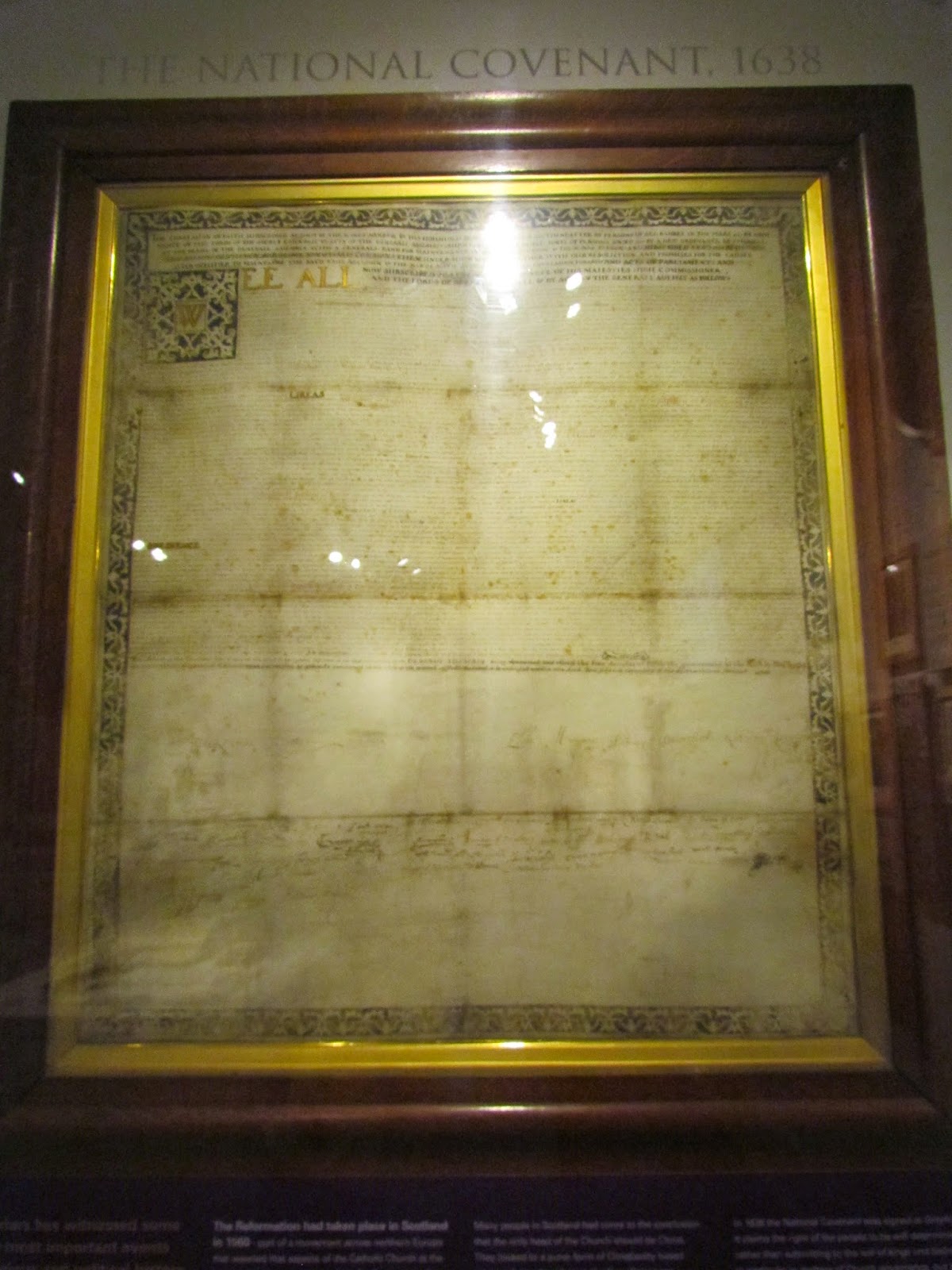 A year later, The Covenant was read from the pulpit of Greyfriars and signed by the nobles attending the service. Ministers and council representatives added their names the next day, down the hill in the Tailors' Hall in the Cowgate. Some people, it is said, even signed their names in blood.

The document was then taken all over Scotland, where it was greeted with more or less enthusiasm depending on the political and religious allegiances of the local population.

You can see an original copy of the Covenant, made at the time of signing, in the small museum in Greyfriars Kirk. There is another in St Giles and one in Huntly House in the Canongate, now the City Museum.

The Covenant asserted that the Scottish Church was independent of the state, and, indeed, of the monarchy. Our current Queen may be Head of the Church of England, as her ancestors were before her, but she has no role in the Church of Scotland. The Covenant rejected 'innovations' in church governance and, despite insisting that the signatories were loyal to the king, also asserted that they were united in their opposition to the changes they abhorred. Whatever shall be done to the least of us for that cause, shall be taken as done to us all, and to every one of us in particular.

By celebrating their unity, the Scottish Protestants also asserted their rebelliousness. Although the Covenant was about church governance, by implication it was also stating the right of the Scottish people to self-determination. The Covenant and the Protestant Reformers challenged the practice of having divinely appointed kings and bishops and gave rise to new ideas about the rights of ordinary people regardless of their social background.

The signing of the Covenant ushered in decades of instability and conflict, including the Bishops' Wars, when the Covenanters took control of Edinburgh Castle and the port to prevent the Royalist army attacking the capital. Then followed the signing of the Solemn League and Covenant with the English Parliamentarians which involved Scottish troops in fighting battles in England alongside Parliamentarian troops. Cromwell invaded Scotland in 1650, abolished the Scottish Parliament, made Scotland part of the Commonwealth and ended up running the country until he died in 1658.

When the monarchy was restored, Charles II abolished all the acts passed by the Scottish Parliament, including the one making the Scottish church presbyterian. Bishops were re-established and a new Prayer book introduced. Ministers were required to to swear an oath of allegiance to the bishops and the King.

Many Scots chose to resist, including a third of Scottish ministers, 262 in all. Robert Traill, minister of Greyfriars was arrested, imprisoned and later banished for refusing to sign the oath. The ministers were locked out of their parishes and went on the run, holding illegal services whenever they could. Ordinary Scots  rose up against authority. To the left, you can see the sword belonging to Robert Traill and another belonging to a Daniel Macmaster. Rebels were executed and some were transported to the New World and the Caribbean.

After years of conflict, the so-called Killing Time, in 1679 the Covenanters were defeated at the Battle of Bothwell Brig. Over the winter, 1400 prisoners were held in open cages in a field next to Greyfriars Kirkyard in the hope they would recant. Some died of exposure and malnutrition, for they were allowed only 4 ounces of bread each day, though local citizens could bring them more.  You can visit the Covenanters' Prison, although in 1705 the original field became part of the graveyard. 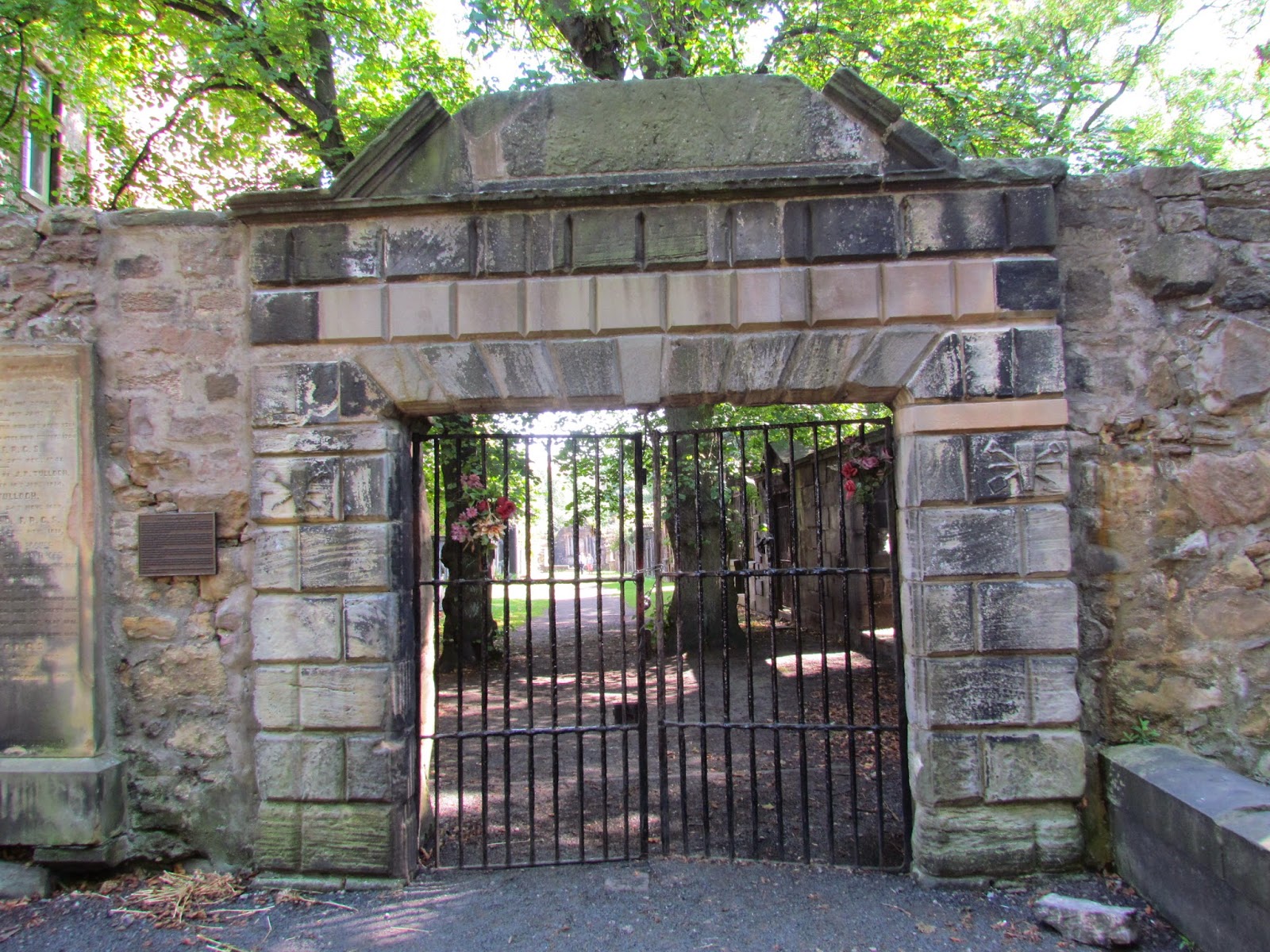 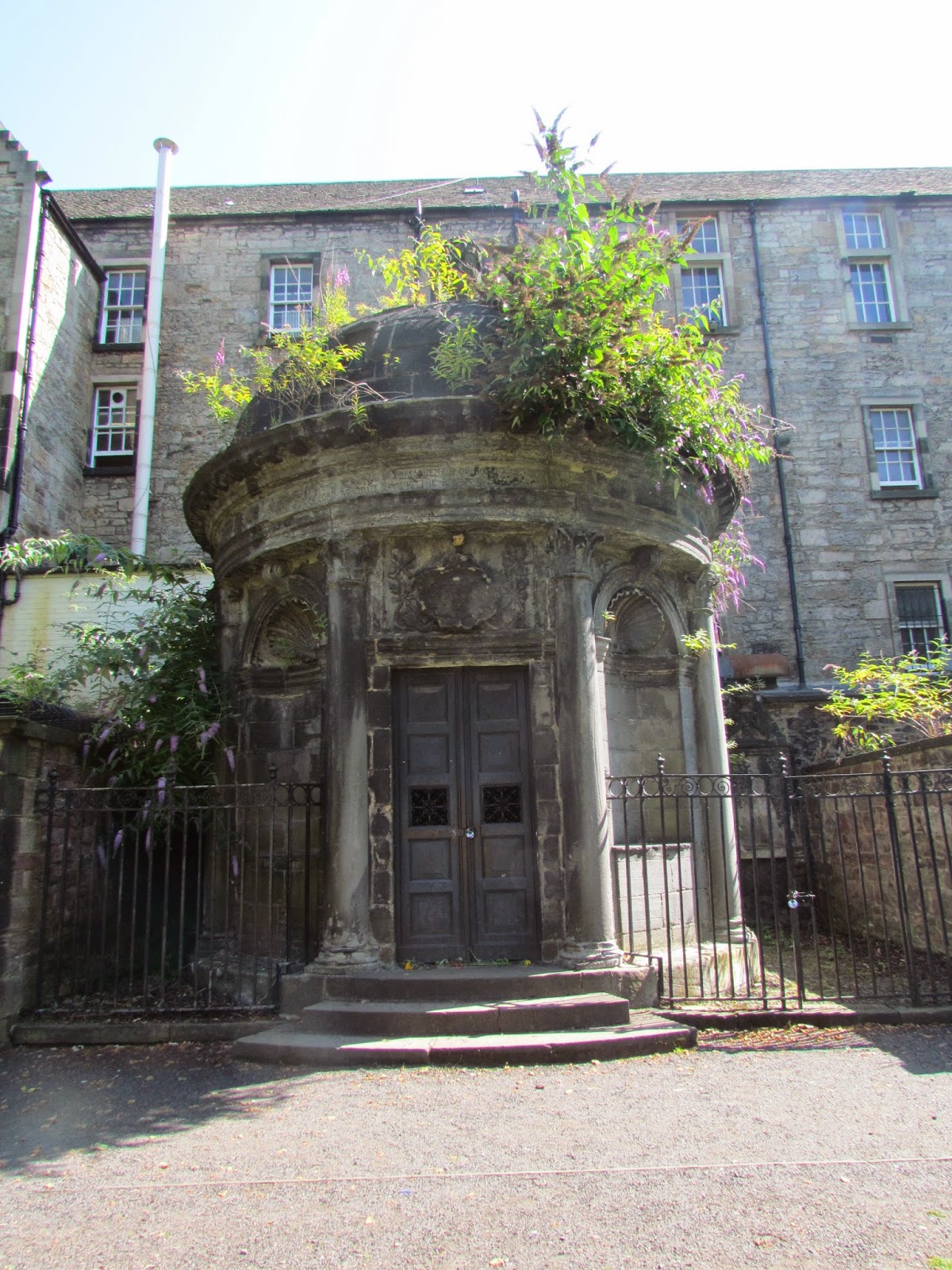 A hundred prisoners were executed in the Grassmarket, the warrants signed by Sir George (Bloody) Mckenzie, whose grave you can see on the left. 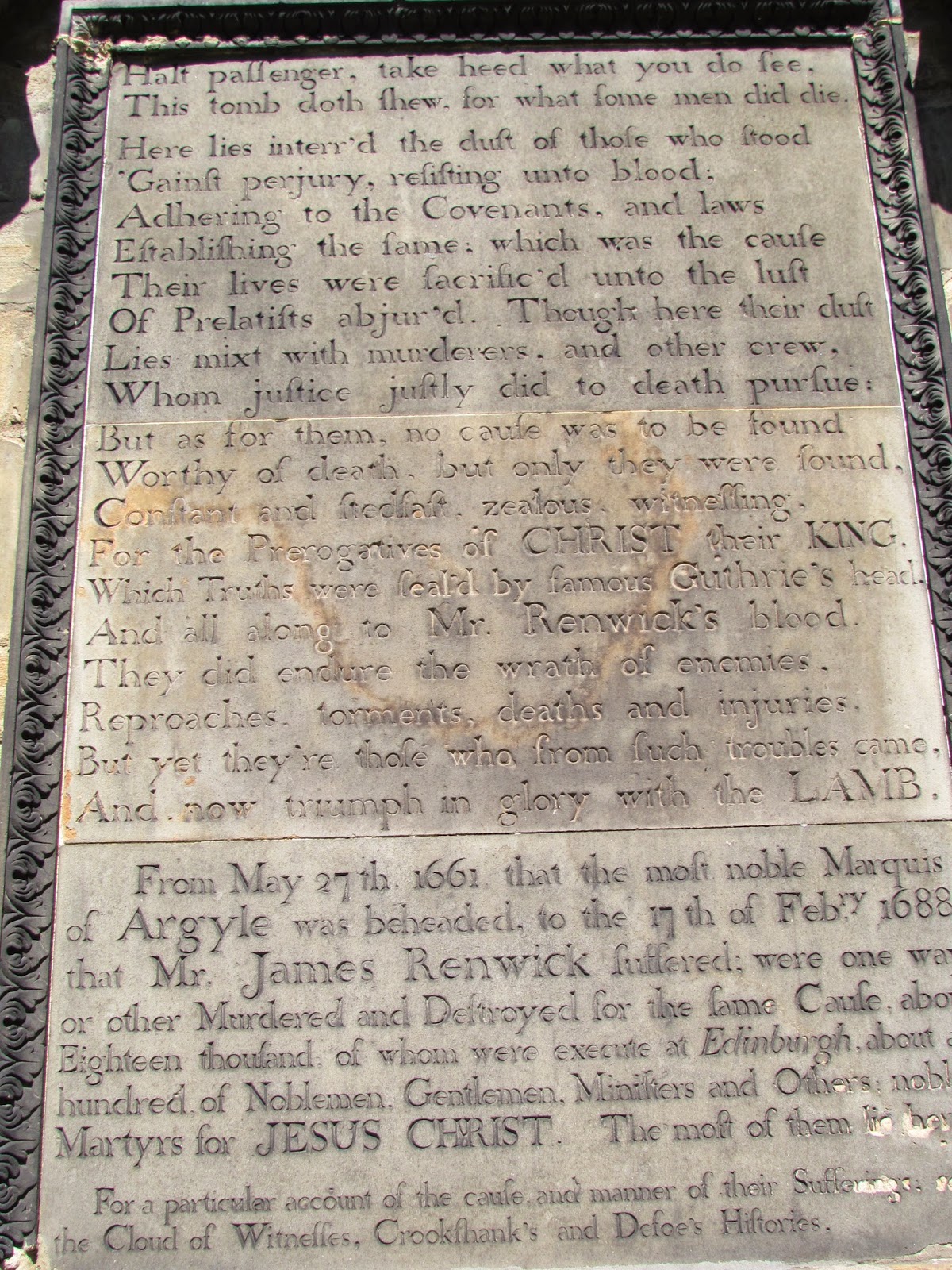 The remaining 257 prisoners were sent to Barbados and South Carolina, a topic for an earlier post. Those who survived the shipwreck off the Orkney Islands were among the first white slaves to work the plantations. In the Kirkyard, you can see a memorial to the Covenanting martyrs. 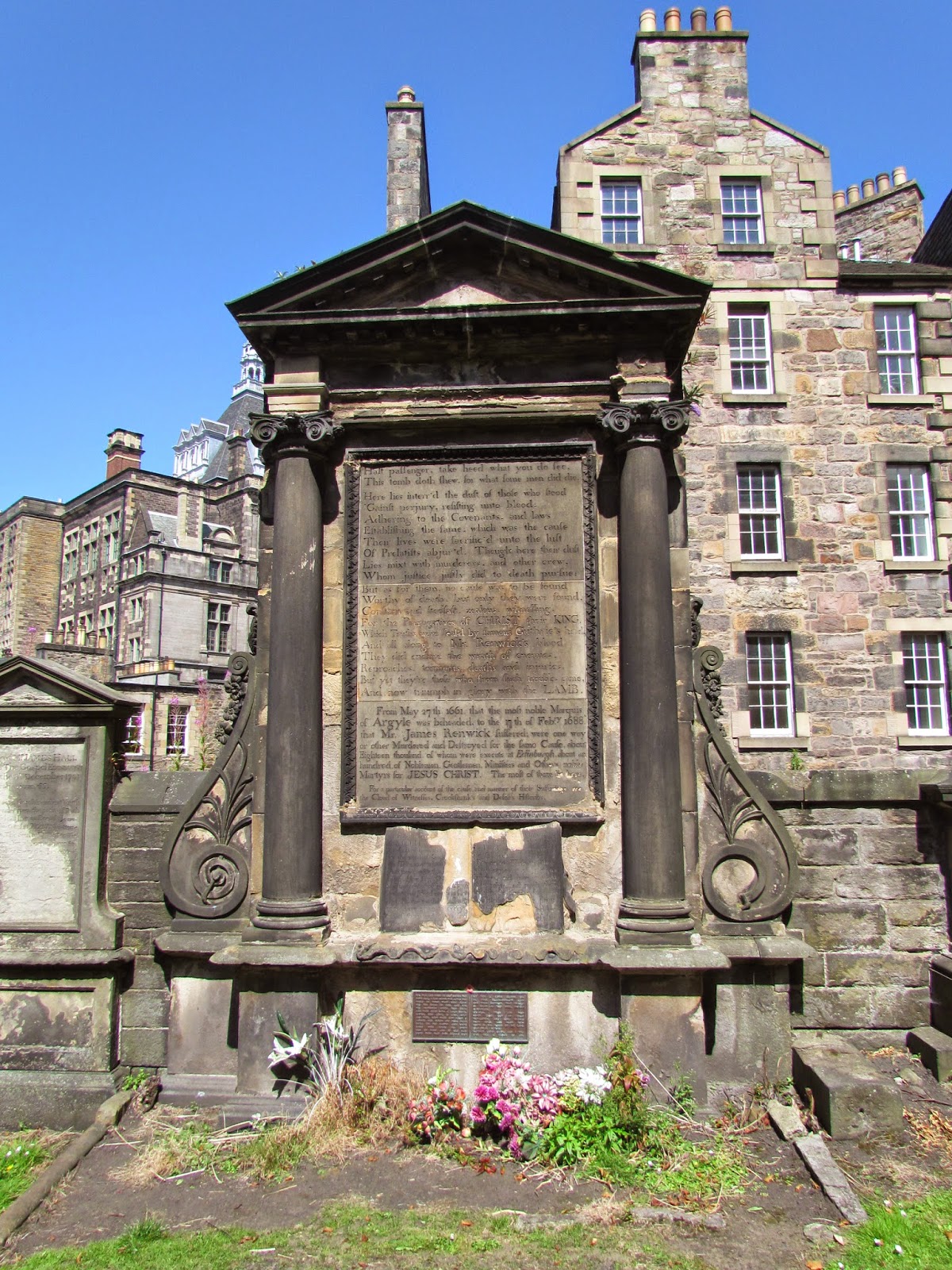 Greyfriars continued to serve the local community after the Covenanting years were long over although, strangely enough, as two churches, one at the east end, Old Greyfriars, and one at the west end, New Greyfriars. 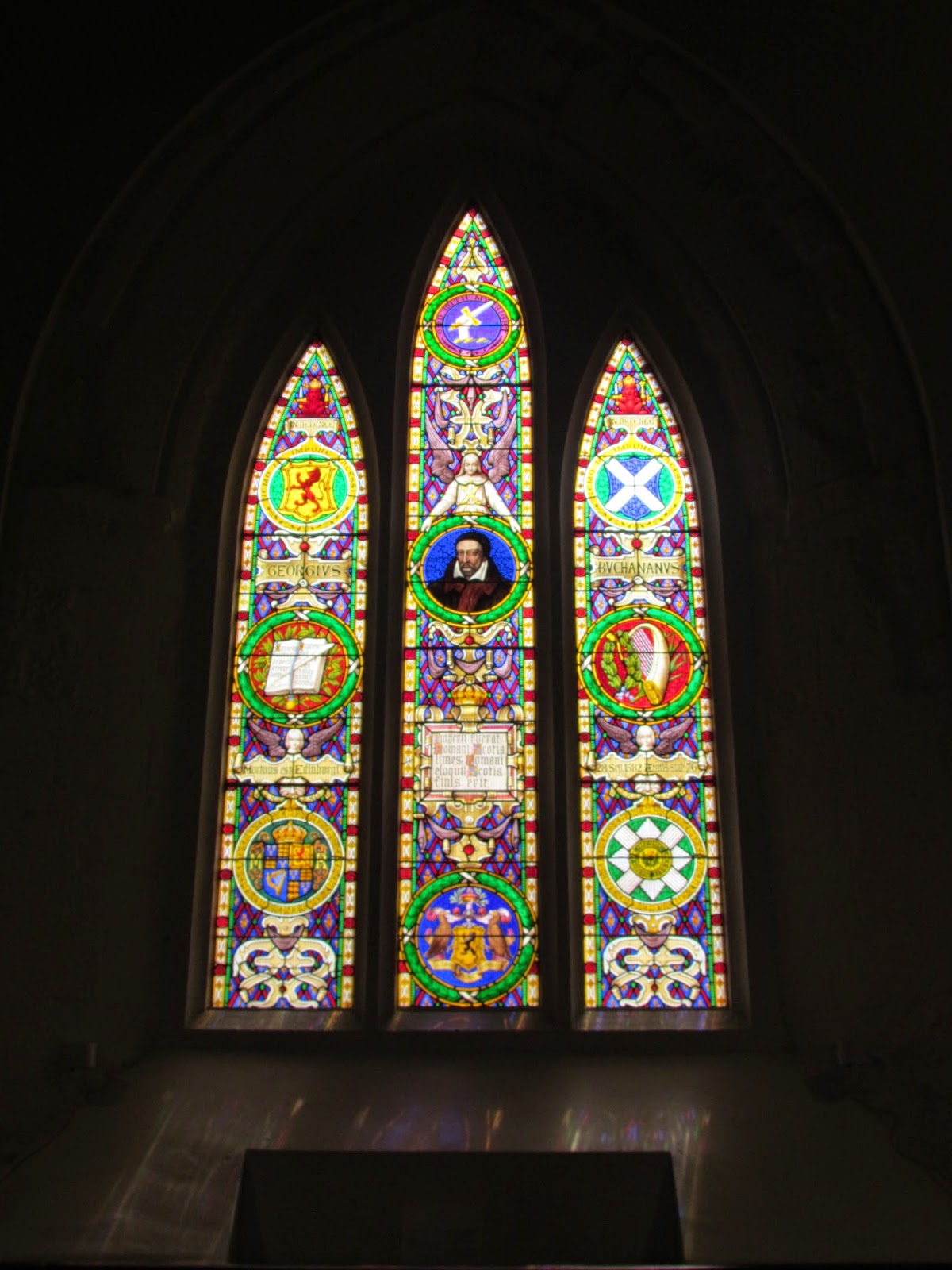 After the fire in 1845, the church was restored. The austere appearance of the interior was transformed by the introduction of stained glass windows, the first in Scotland. Here is the window dedicated to George Buchanan, poet, historian and tutor to Mary Queen of Scots. He also oversaw the education of her son the future King James VI/I. He is buried in the Kirkyard.


The Minister at the time, Dr Robert Lee, also began to modify the Puritan style of the services. He introduced a harmonium to accompany the singing and then an organ, the first to be installed in any Presbyterian church in Scotland. 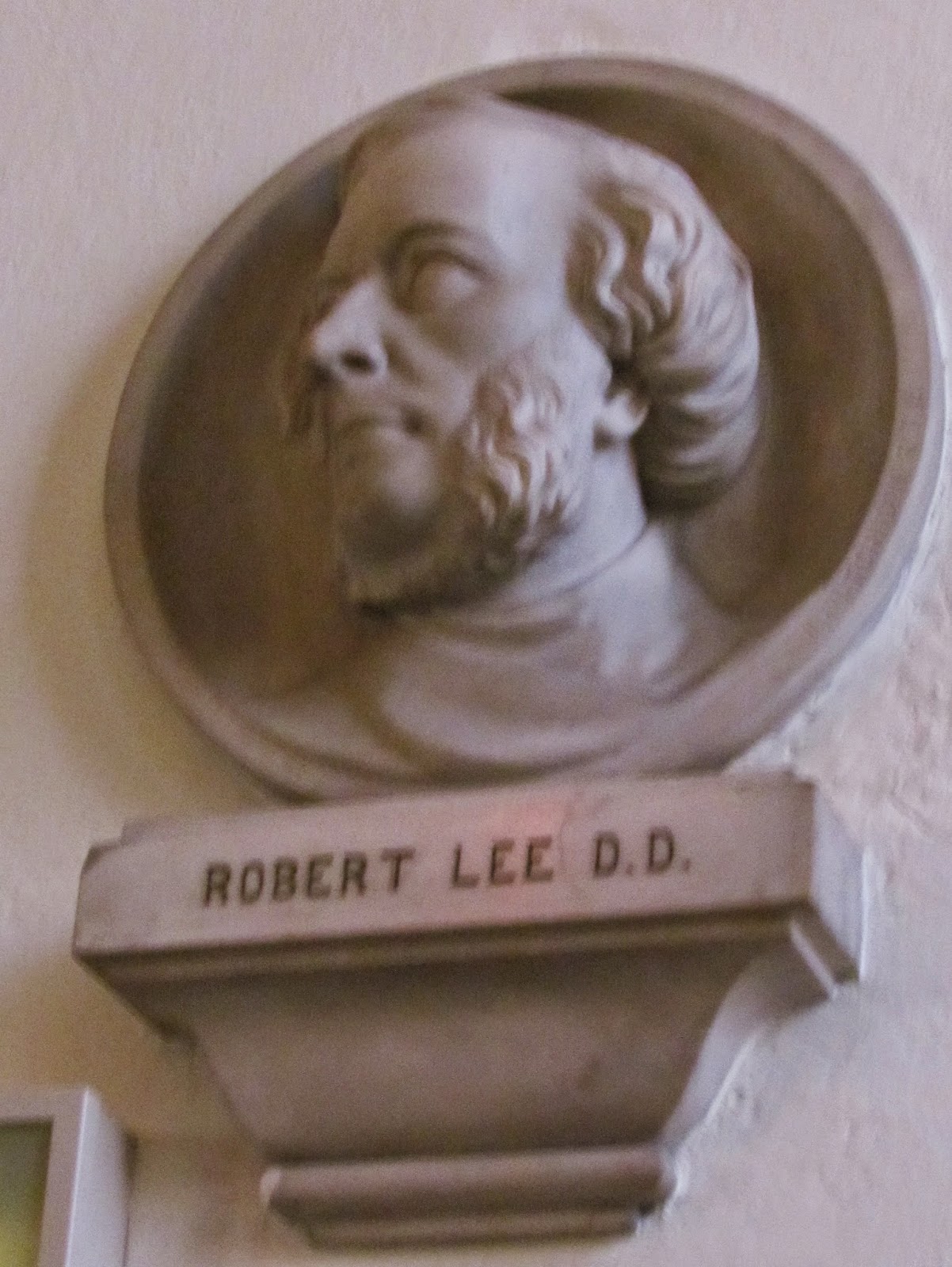 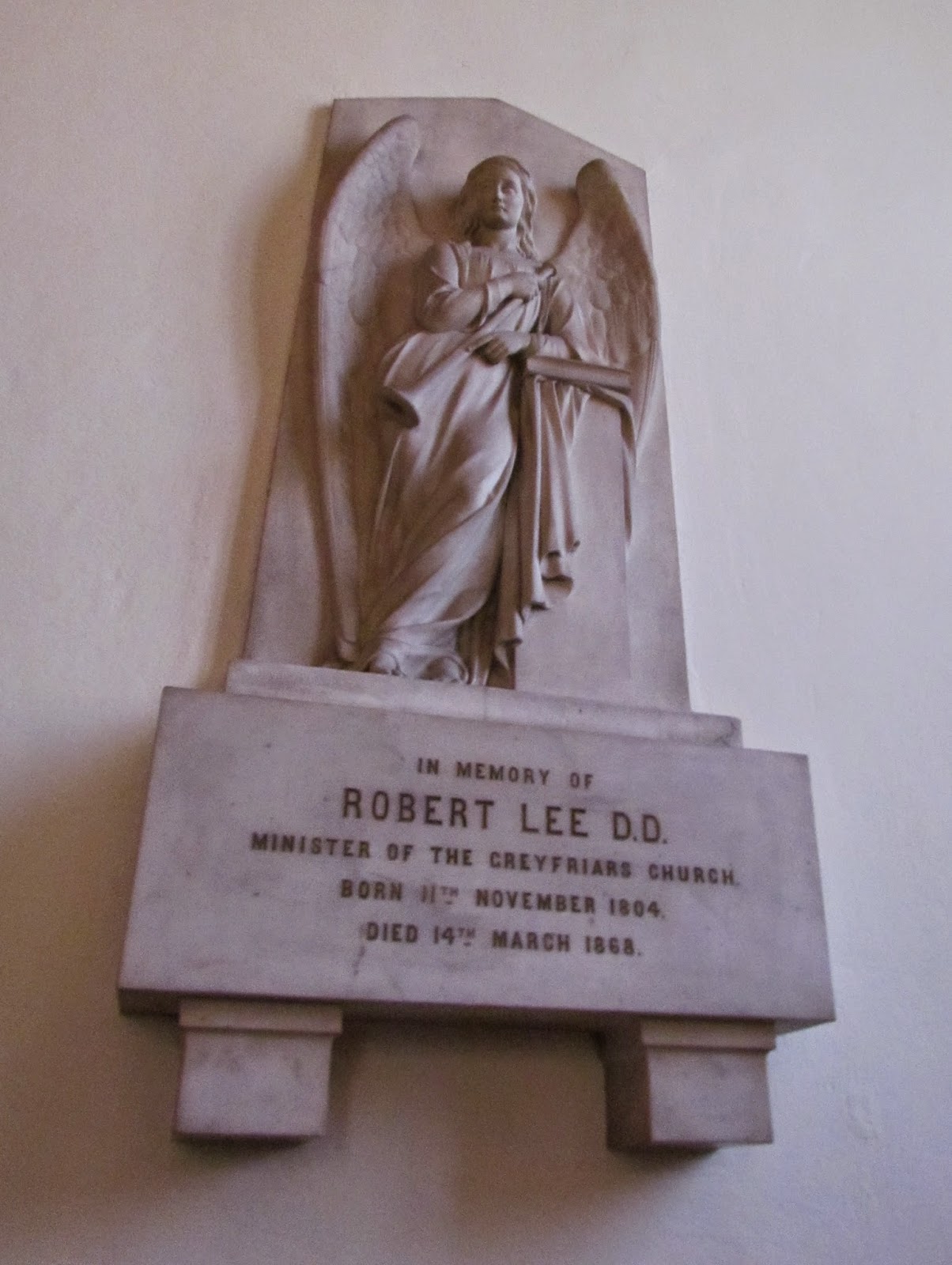 Ironically, another of Dr Lee's changes was the introduction of a prayer book. In fact, he went even further and encouraged the congregation to kneel when they prayed and stand when they sang. Dr Lee was taken to the Church court for these scandalous innovations, but died before the case was heard. His changes, however, remained.

The church houses a number of interesting memorials: to Walter Scott's father and to Robert Adam, both of whom have tombstones in the kirkyard.

In the early 1929, the two congregations were merged, the dividing wall knocked down and a beautiful ceiling erected, made of Californian red wood. 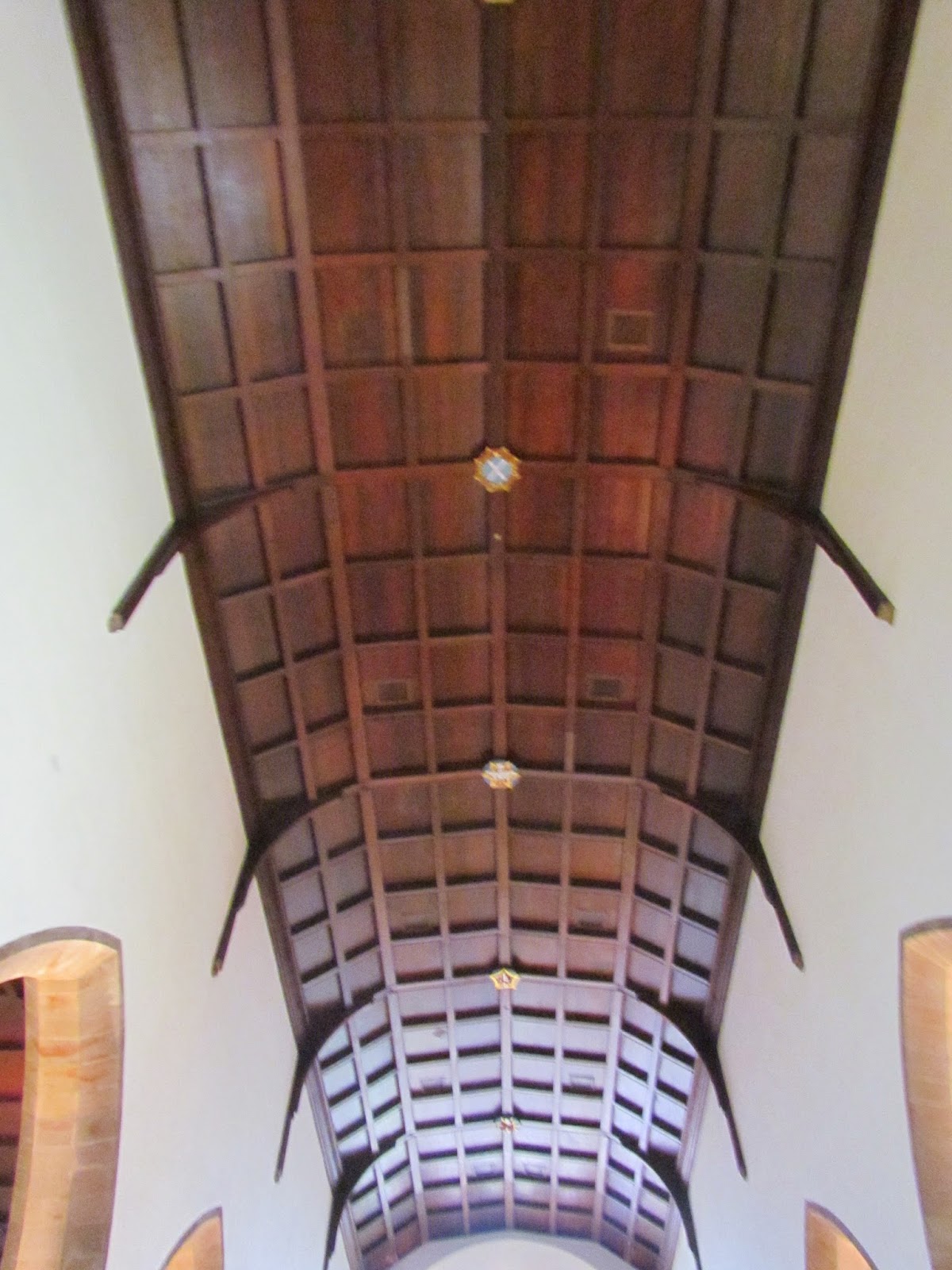 Improvements have continued to be made, one of the most recent being the installation of a new organ in 1990. It not only produces a glorious sound, but is beautiful to look at. The wood carvings represent key symbols of Scottish life and the history of Greyfriars. 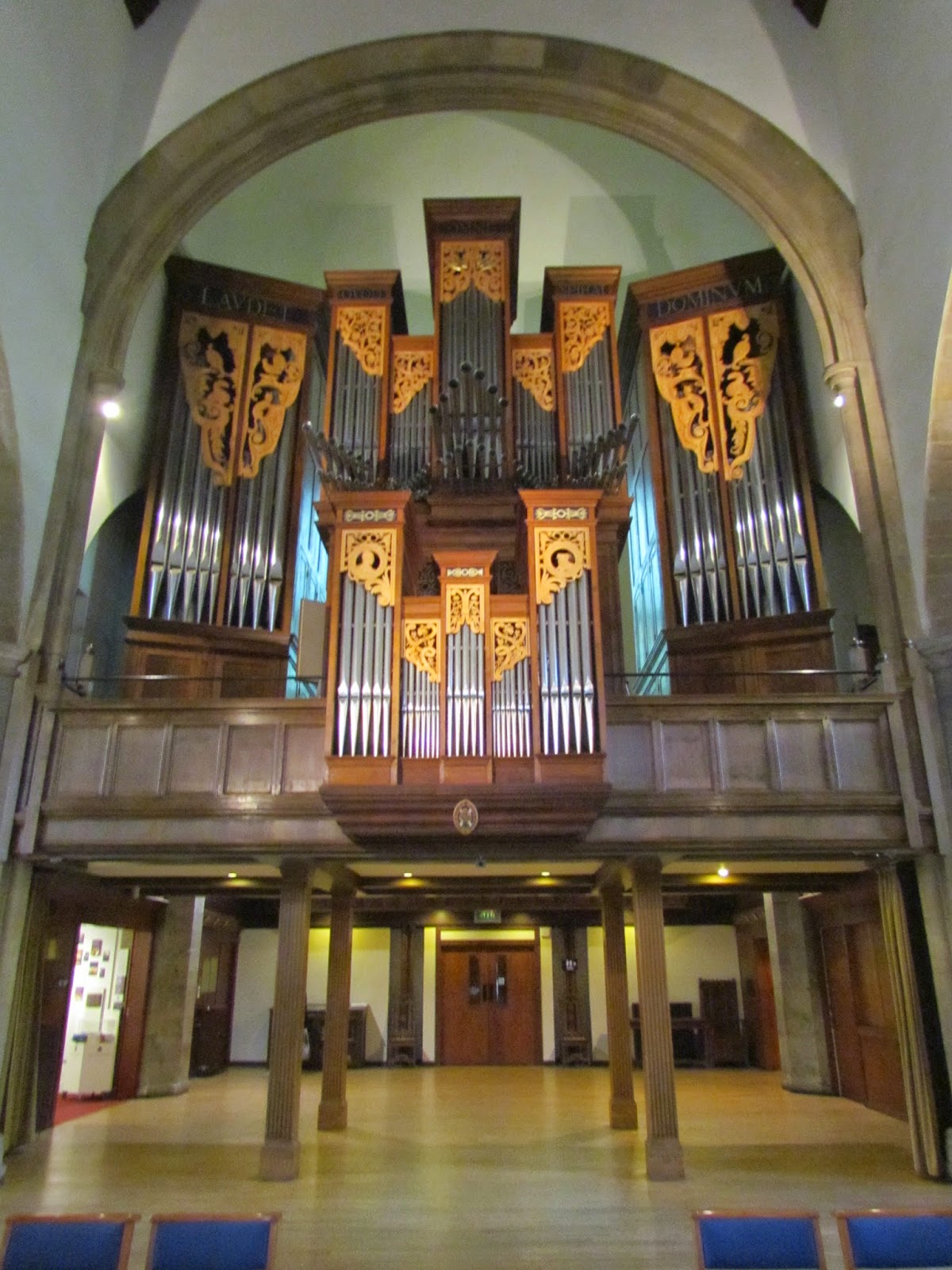 The church has become a favourite concert venue because of its excellent acoustics and an attractive space for art exhibitions.


However, Greyfriars Kirk will always principally be known because of its unique role in Scottish history and in the development of the distinct identity of the Scottish people. 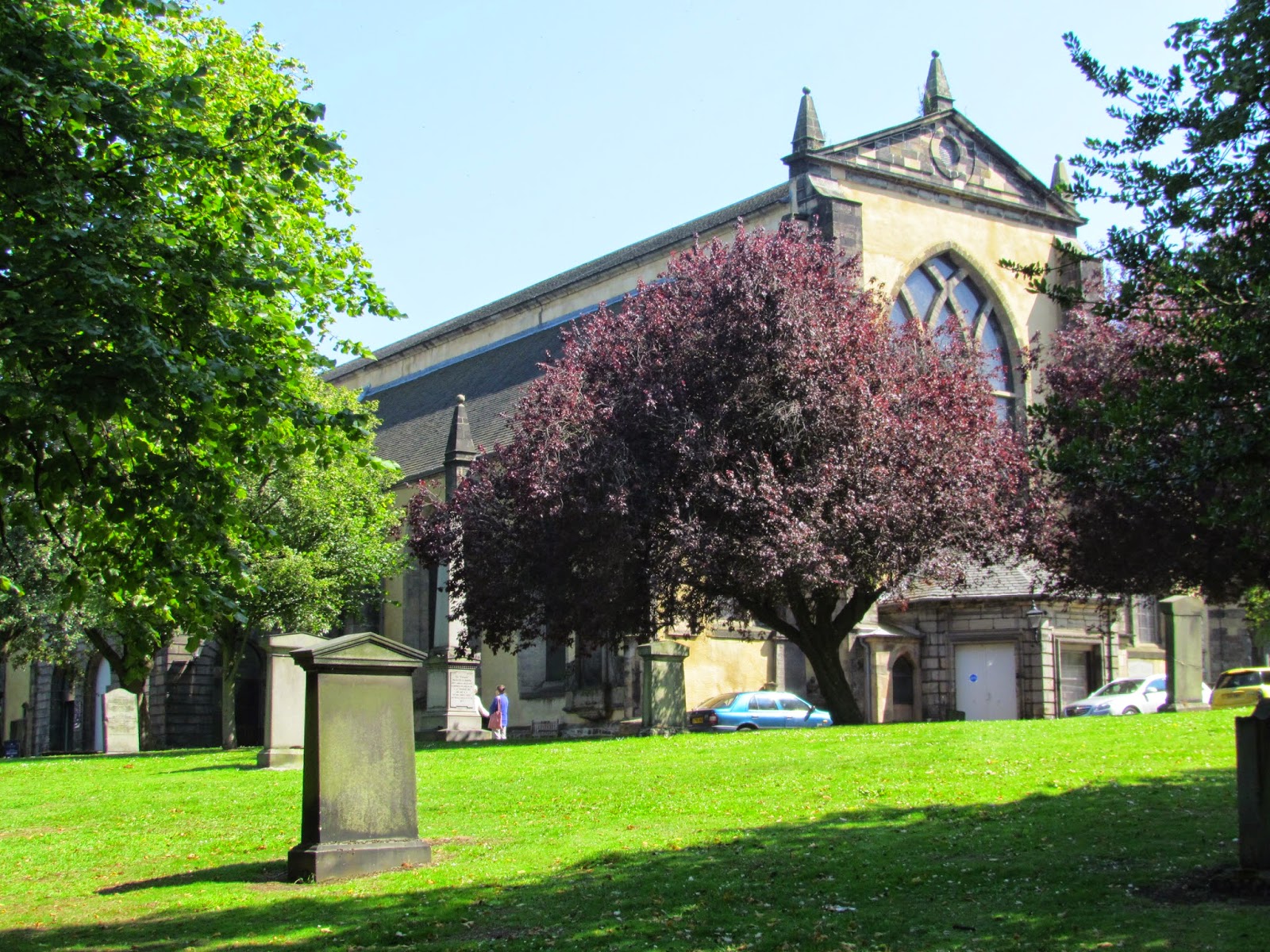 You may also be interested in the following posts:

A walk around Edinburgh's Parliament Square: Power to the People, the Princes or the Prelates?

What were the Scots doing in Barbados and how did they get there?

Posted by Elisabeth Ritchie at 22:09