A day out from London: Hever Castle, where Anne Boleyn changed the course of history

What could be more typically English than this first view of Hever Castle in Kent? It looks so quiet and peaceful, yet what happened here not only transformed the way England worshipped and was governed, but also had a significant influence on the course of Scottish history. 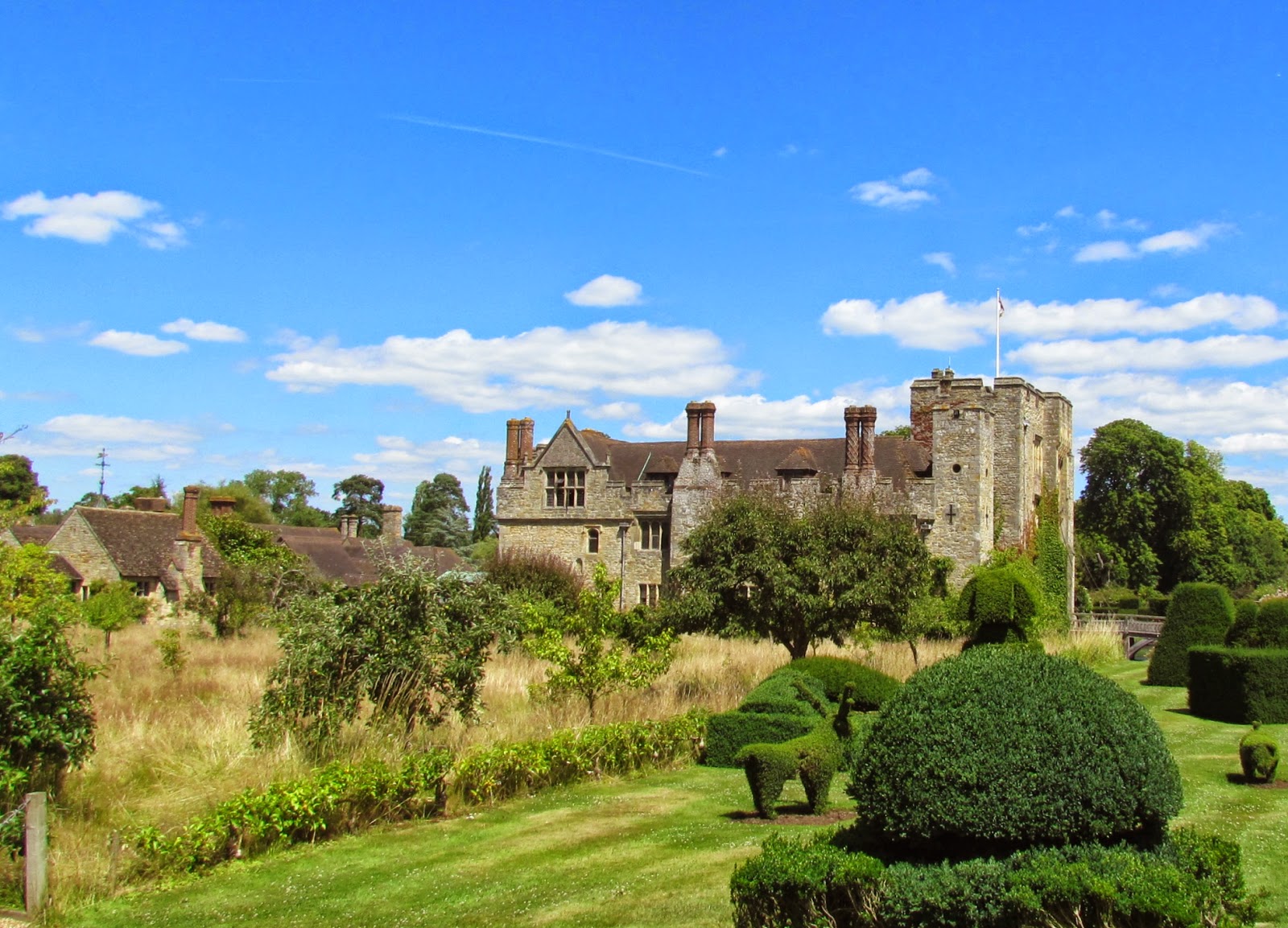 Yet, Hever is not one of the great palaces of the ruling class. It is not a fortified castle like Harlech or Edinburgh. It's not The Tower of London. Nobody governs a country from Hever. 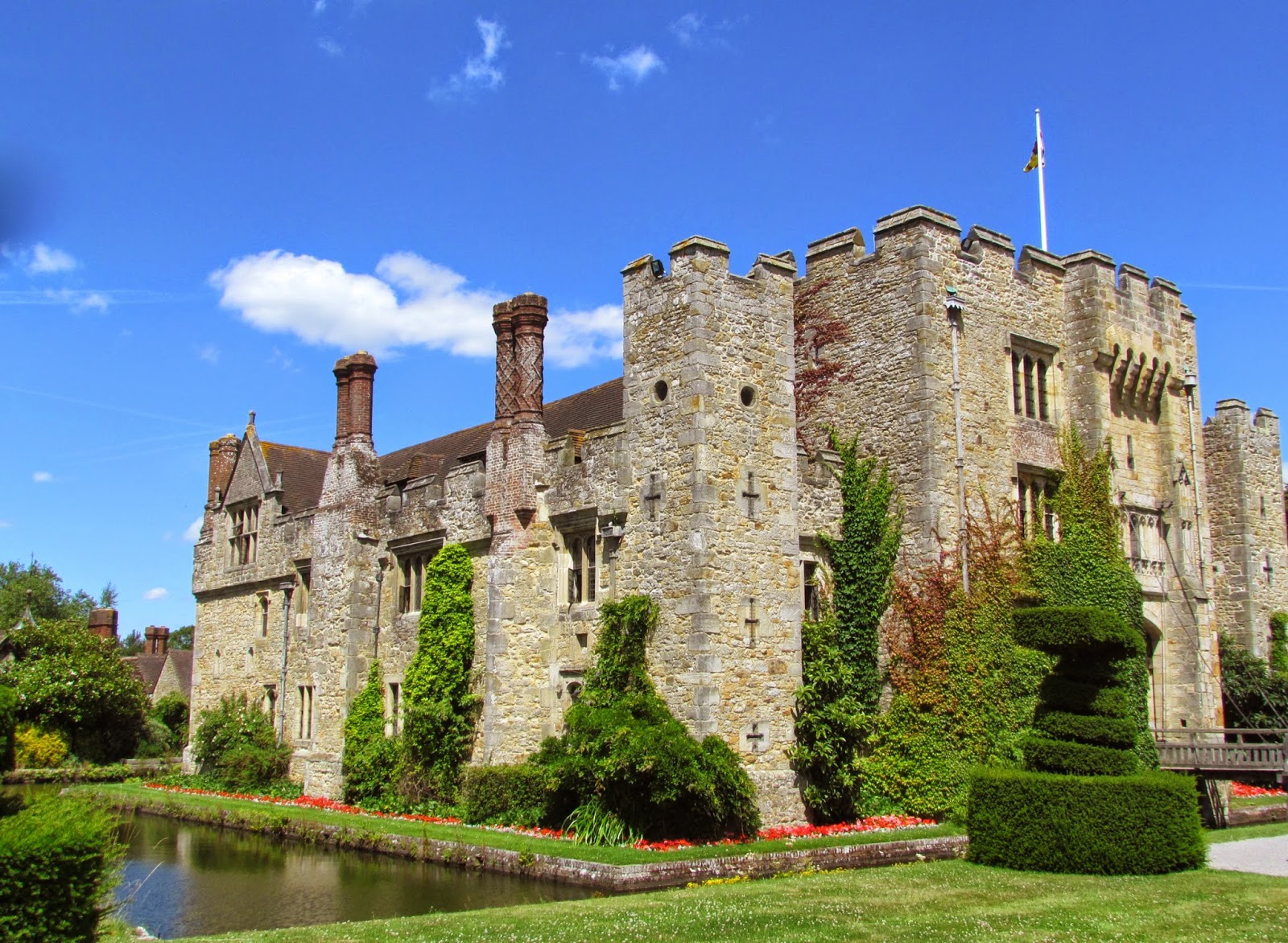 Hever is a typical Tudor house with just enough in the way of fortifications to enable its gentleman owner to raise his portcullis (which is still in place), pull up his drawbridge and confront his neighbours across the moat, if necessary. 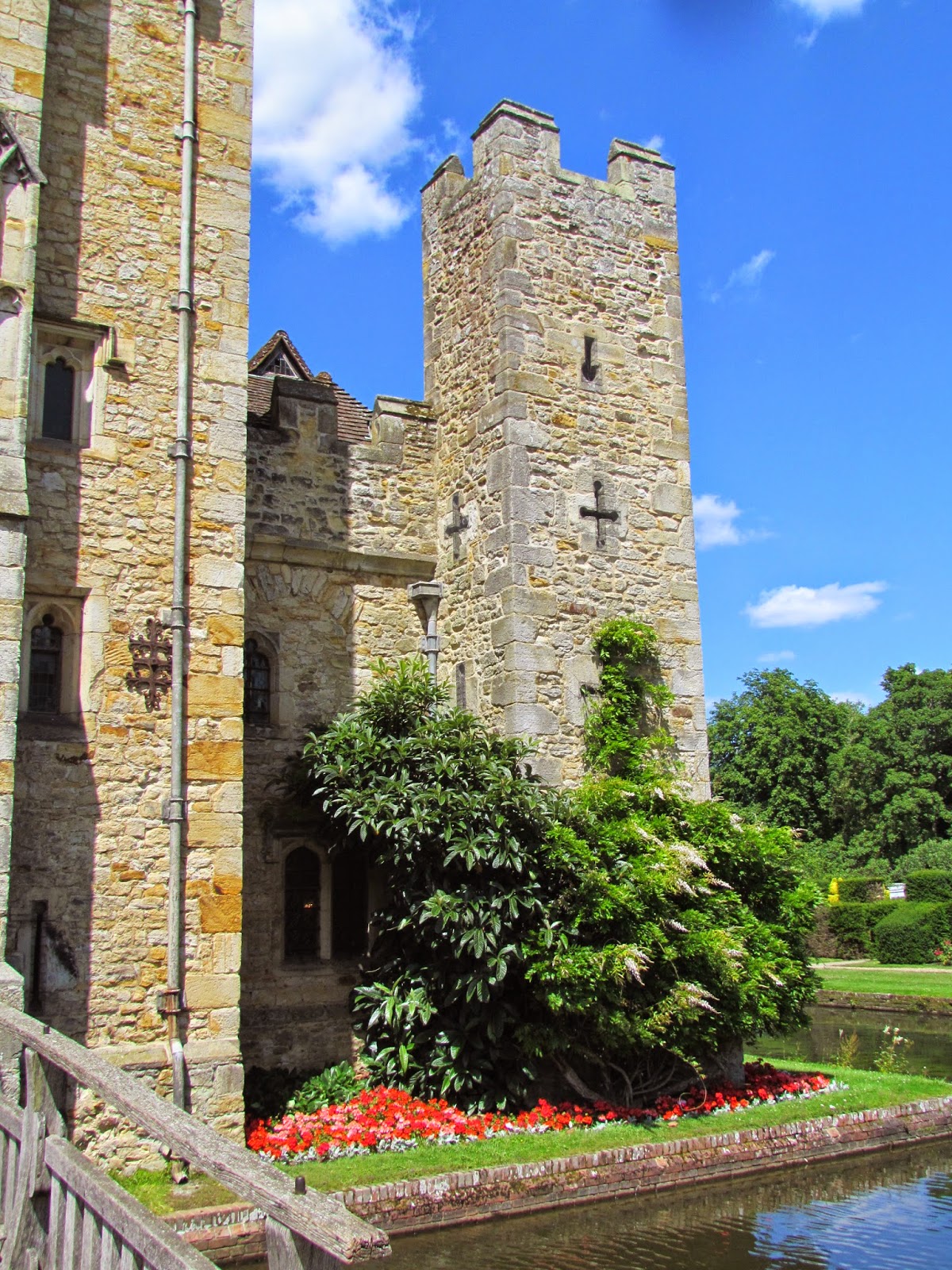 Yet, at the same time Hever is quite clearly a home, a family dwelling with all the additions and improvements necessary to make life as comfortable as was possible at the time.

Built in the thirteenth century as a fortified keep with a surrounding wall, or bailey, Hever was rebuilt as a Tudor manor house two hundred years later. The owners responsible for its transformation were the Boleyn family.

It was here at Hever that Anne Boleyn was brought up, from her birth in c1501 until she was sent to the Dutch court at the age of twelve, to complete her education as a gentlewoman.

It was also at Hever that Anne lived on her return to England, when she was twenty one. She was there during her abortive betrothals and when her Royal mistress, Queen Katherine of Aragon, didn't require her presence at court.

It was to Hever that Henry VIII came to visit Anne. Such courtship outside marriage was not unusual for kings, who often had mistresses. Anne's own sister Mary was already Henry's mistress. One can only imagine the sisters' cosy chats! 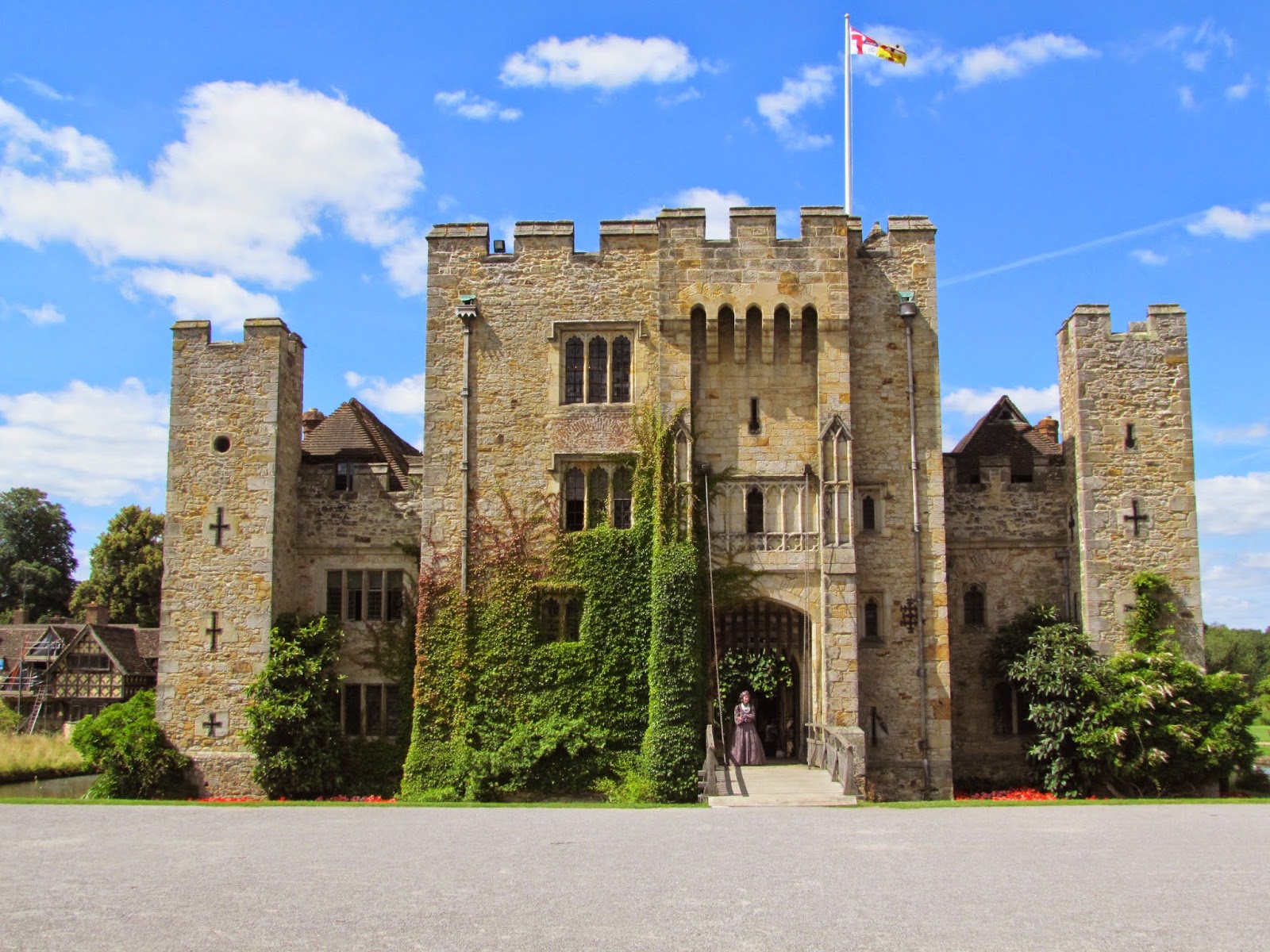 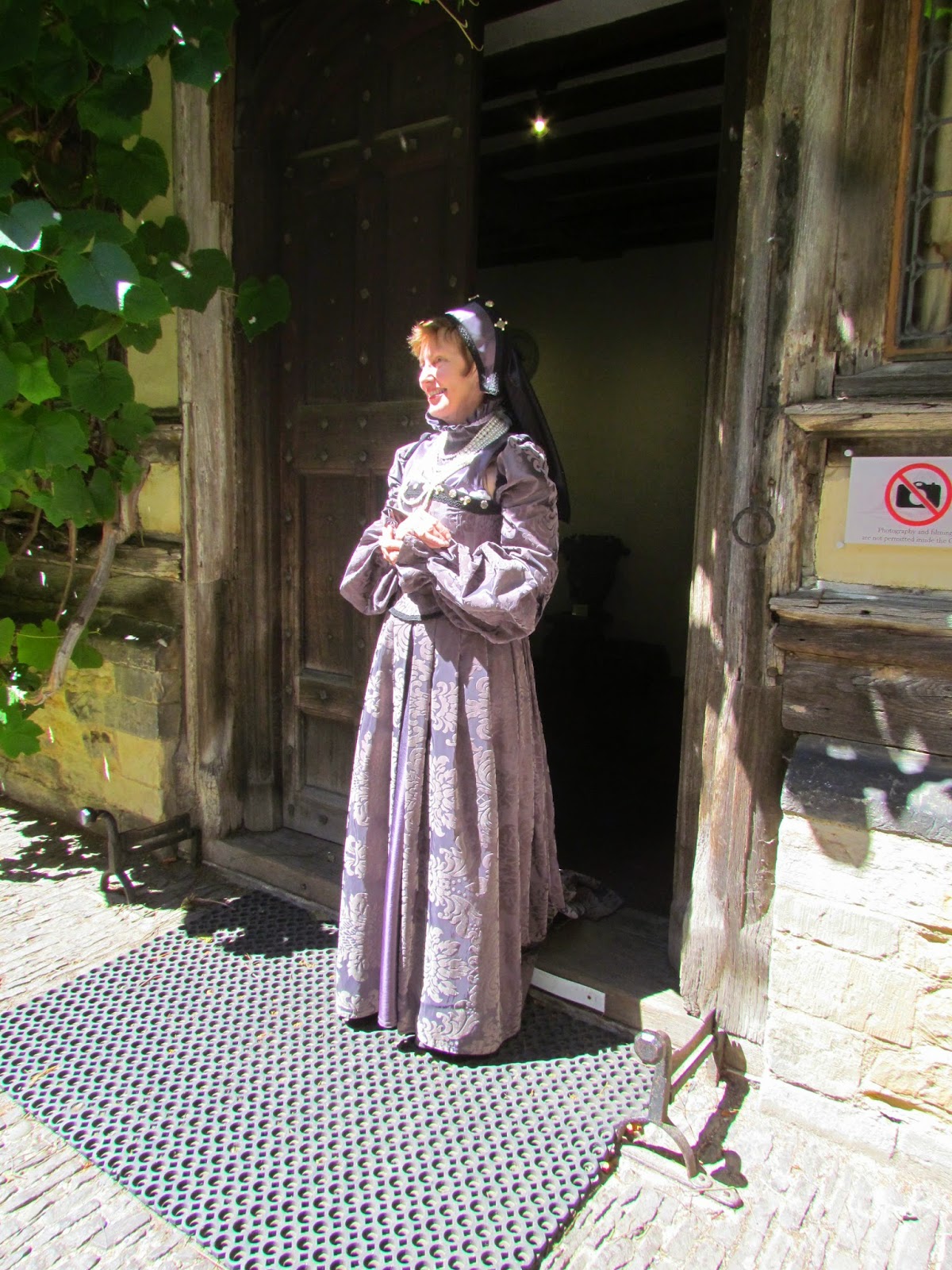 Henry would ride up to the castle from where he was staying in Bolebroke Castle, hand his horse over to a manservant and pass over the drawbridge of the fortified gatehouse to be welcomed into the courtyard.

Here the building changes from stone to timber, from castle to manor house.

The Boleyn family home looks very comfortable, once you're in the courtyard. Walk inside and that sense of comfort persists. The rich wooden panelling gives an impression of warmth. No photographs allowed, I'm afraid, so you'll just have to imagine the sun streaming through the small glass panes and lighting up the old portraits, armour and furniture. Indeed, the castle has the largest collection of Tudor paintings in the country.

Well, as we all know, she both welcomed Henry and held him off. She seemed to promise the fulfilment of desire but continued to delay by demanding a divorce from Katherine and marriage to herself. And that, of course is what happened. The ambitious Boleyn family of Hever seemed destined for greatness.

As a result of that divorce and remarriage, King and country were excommunicated, the Church of England was born and the nation became Protestant. England was now independent of Rome. At the same time Scotland remained torn between factions: between the new Protestant movement and the old Catholic ways. Mary Queen of Scots was Catholic. Her son, the future James VI/I, was brought up a Protestant and was surrounded by Protestant advisers. Anne's family had Protestant leanings yet she would have been brought up in the 'old' religion. You can see Anne's beautifully illuminated Books of Hours at Hever, which she inscribed with her name.

Once married, Anne gave birth, though somewhat disappointingly, to a daughter who eventually became Queen Elizabeth I of England.

Hever Castle, the scene of so much family promise, now witnessed terrible family tragedy. Anne had one miscarriage after another. Henry, disappointed by lack of a male heir, started wooing Jane Seymour. In 1536, he accused Anne of witchcraft, adultery and even incest with her brother, George. Both Anne and her brother were beheaded. One of the judges was their uncle, Thomas Howard. A family torn apart.

In time, after a childhood grieving for her executed mother and an adolescence marked by the loneliness and isolation inflicted by her sister Mary Tudor, Anne's daughter Elizabeth inherited the throne. And so, her parents' courtship at Hever led, eventually, to one of the most glorious reigns of any English monarch. 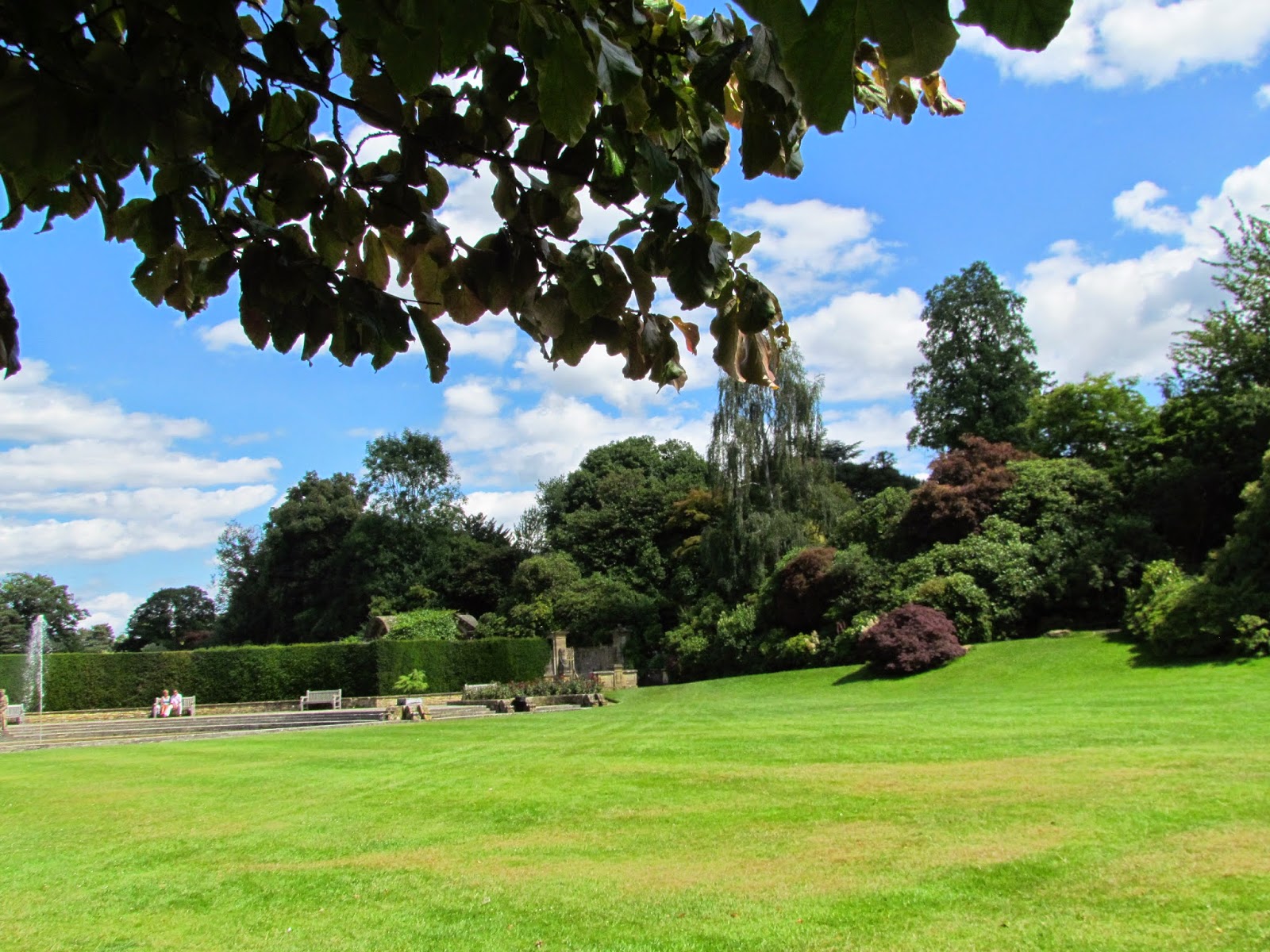 This brilliant, learned, charismatic woman had learnt the lessons of her childhood insecurity and her mother's sad end. She was also determined to avoid the disastrous marital mistakes of her cousin, Mary Queen of Scots. Elizabeth chose to die unmarried and childless, the Virgin Queen. She named as her successor Mary's son, by then King James VI of Scotland and now also King James I of England.

The determination of Anne Boleyn to become Queen Anne of England and the impact of her actions on her daughter Elizabeth could be said to have led  - indirectly, to be sure - to the Union of the Crowns of England and Scotland in 1603. Later, in 1707, both Parliaments passed the Act of Union between the two countries, England agreeing to bail out a Scotland bankrupted by the failure of the Darien scheme. And in 2014, in three weeks time, the Scottish electorate will decide whether to repeal that Union. But all that is another story.

As for Hever Castle, never again was it to witness quite such momentous events. Sir Thomas Boleyn died in 1539, three years after his son and daughter, and is buried in St Peter's Church, which lies at the end of the drive to his house.

On Sir Thomas' death, Hever Castle passed to Henry VIII, who gave it to Anne of Cleves, the fourth of his six wives, when their marriage was annulled in 1540.

Thereafter, the house passed into various noble hands until, eventually, at the turn of the twentieth century it was taken over by an American millionaire, William Waldorf Astor. 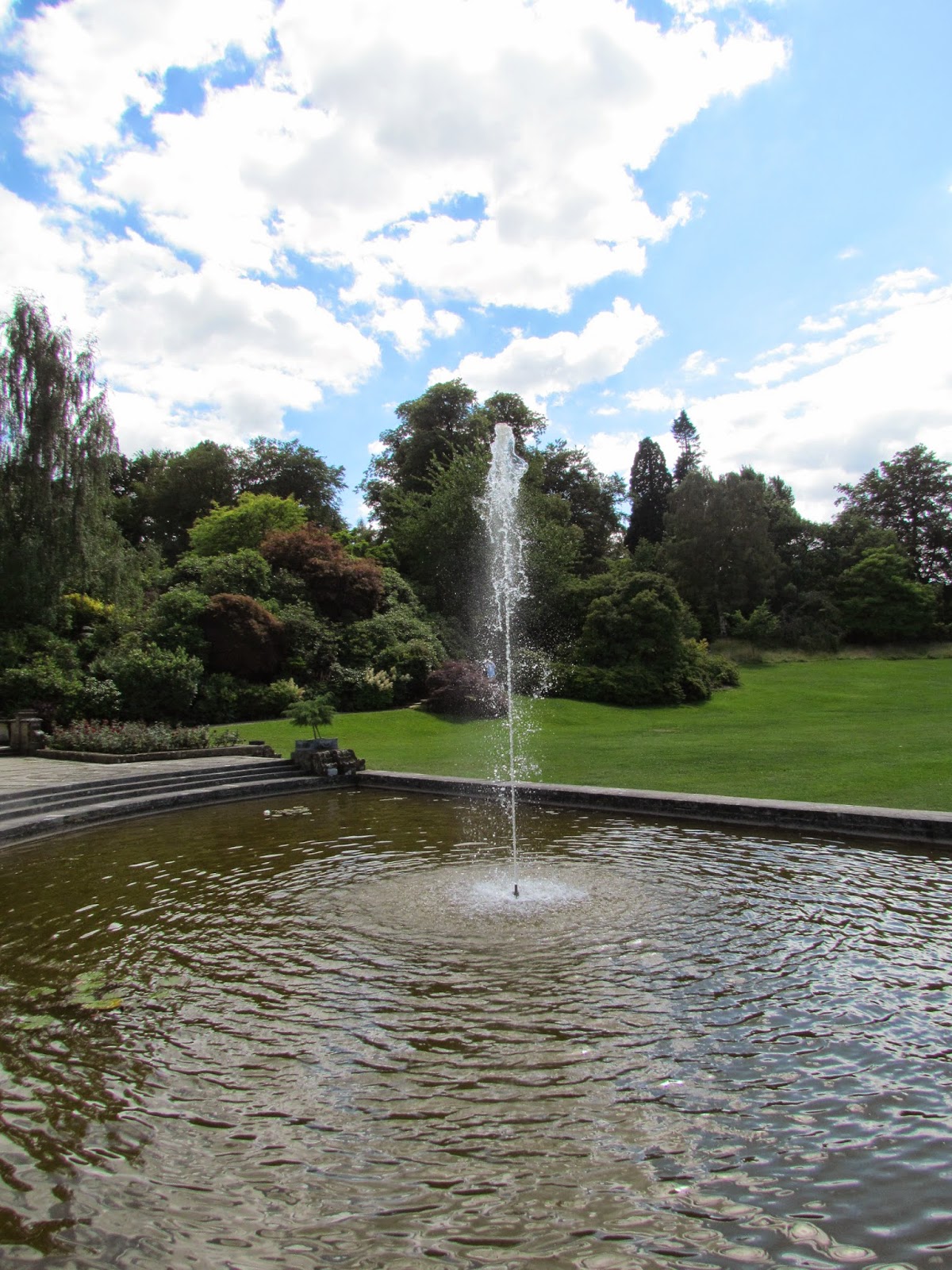 What you see nowadays before you enter the Tudor house, is Astor's beautifully created and managed landscape, with lawns, lakes and Italian statuary. You can wander through the maze he planted with traditional English yew. Astor even constructed a 'Tudor' village, just behind the house. 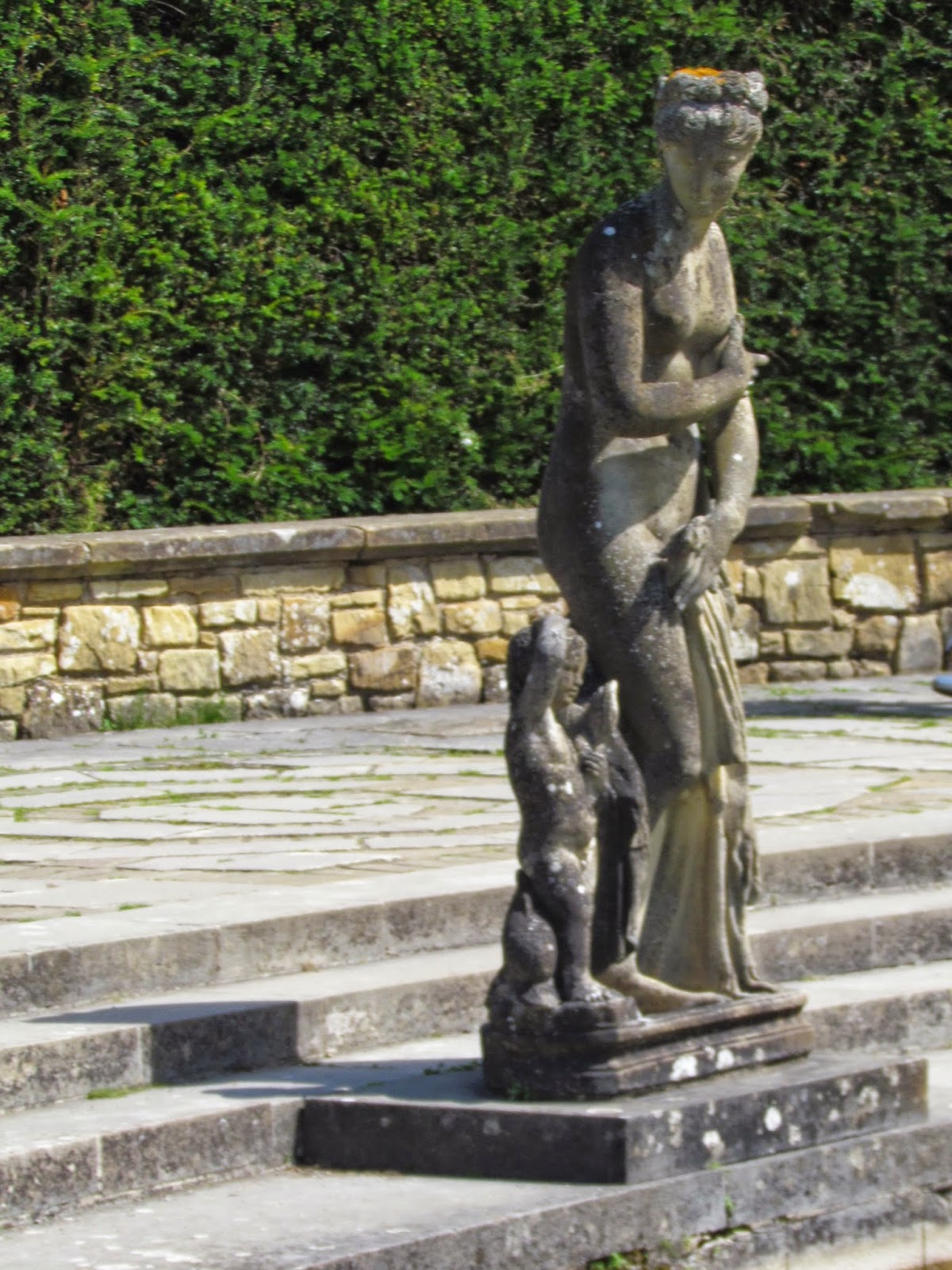 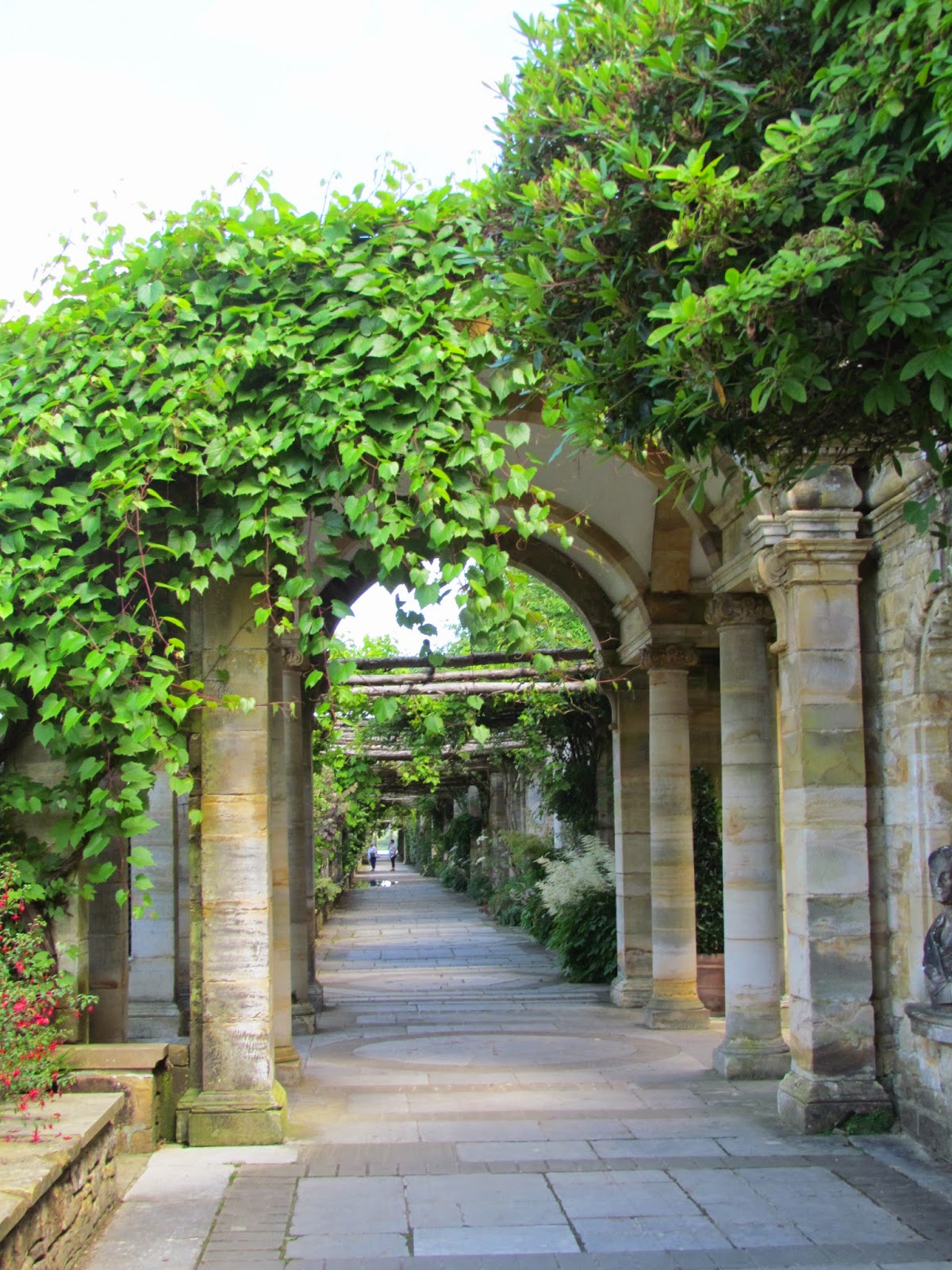 At Hever you can saunter around rose beds and cross elegant formal gardens.

You walk past intriguing pieces of garden statuary and discover that they are Roman. 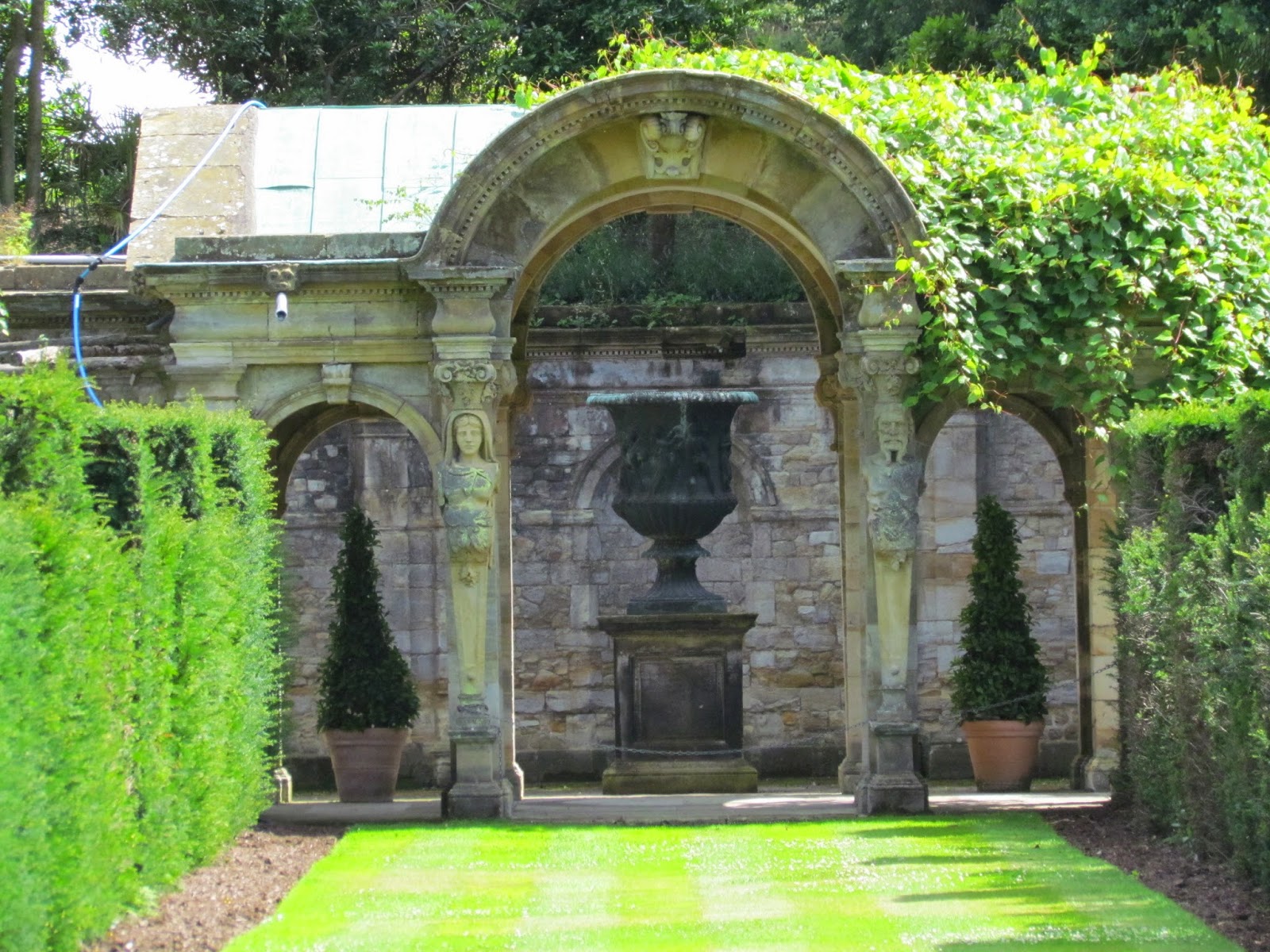 Sadly, Hever Castle is no longer in family hands, nor does it belong to the nation. It is run for profit by a company called Broadland Properties Ltd as a conference centre and tourist attraction. You can even rent residential accommodation at Hever.

However, perhaps we shouldn't sneer. To all appearances, the company runs the Hever estate well. When we were there, families were milling around enjoying the various activities on offer, the archery and the water maze. No doubt the jousting will be popular too. And if that brings even more people into the house to learn the story of Anne Boleyn, so much the better.

Posted by Elisabeth Ritchie at 17:26