Mary Queen of Scots made some very poor decisions. One of the poorest was her marriage to Darnley. Little surprise, therefore, that she sometimes wanted to get away from it all. 'Getting away' meant travelling from her palace at Holyrood, through the hunting park established by her father James V to her castle at Craigmillar. Craigmillar might be known these days as an unprepossessing Edinburgh housing estate, though much improved in recent years. However, in the sixteenth century the castle was right on the edge of the city. There Mary could get some much needed peace and quiet.

Well, it took me under an hour to walk the same route which Mary took in the 1560s, for it's only about three miles from Holyroodhouse (below) to Craigmillar. 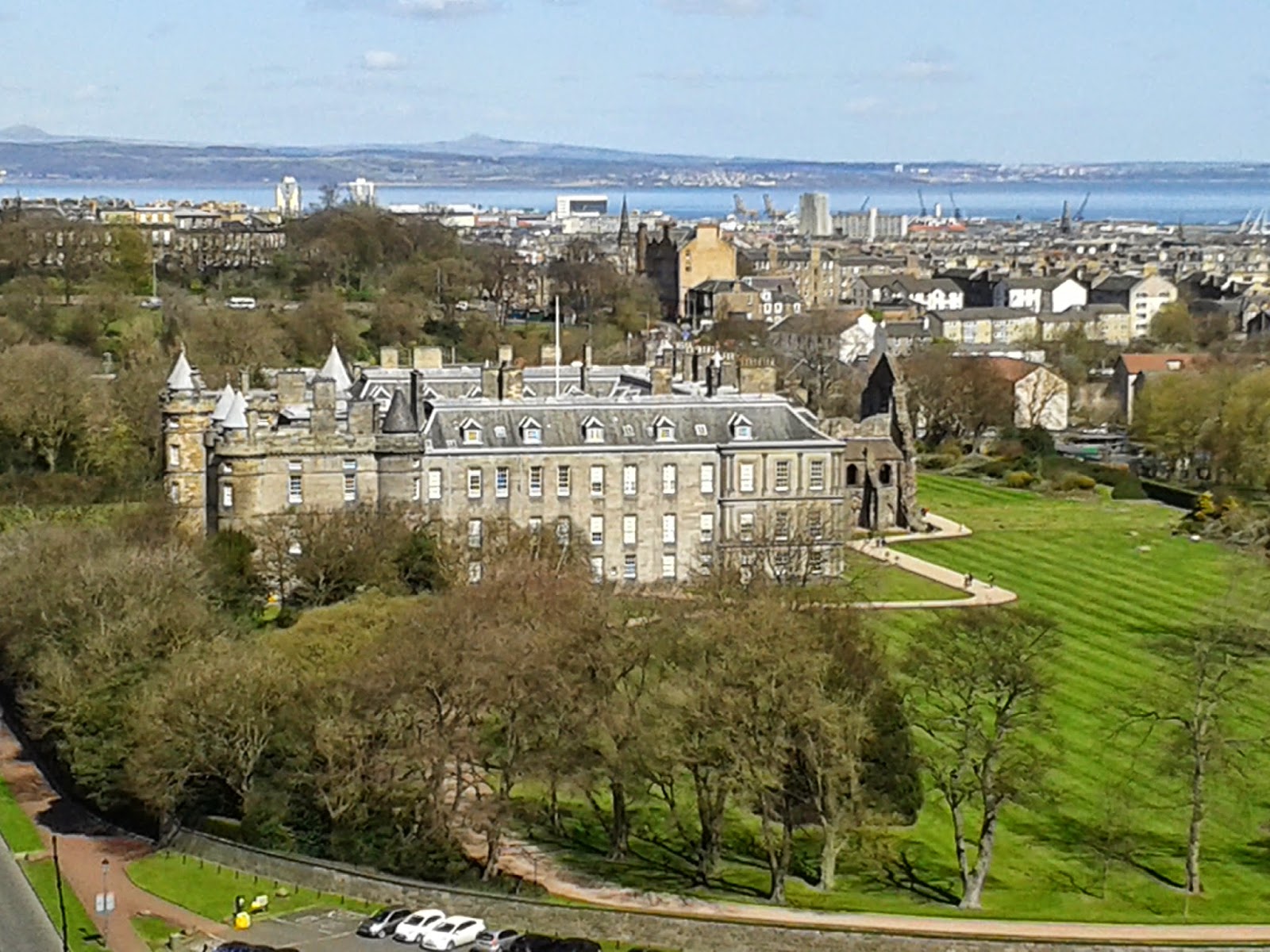 Leaving Arthur's Seat on her left and looking over to the Pentland Hills on her right, Mary would have taken the road towards Duddingston Village. 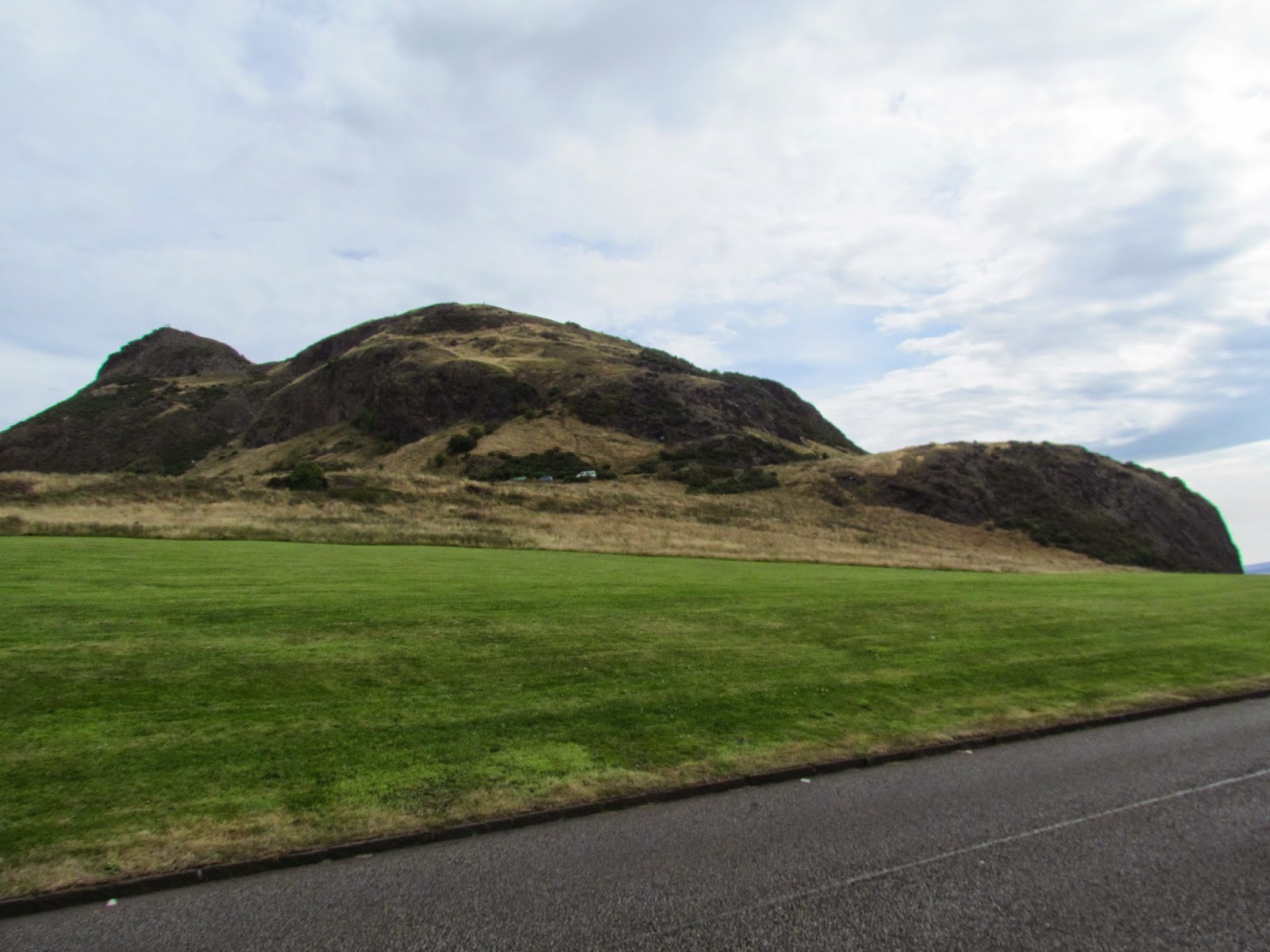 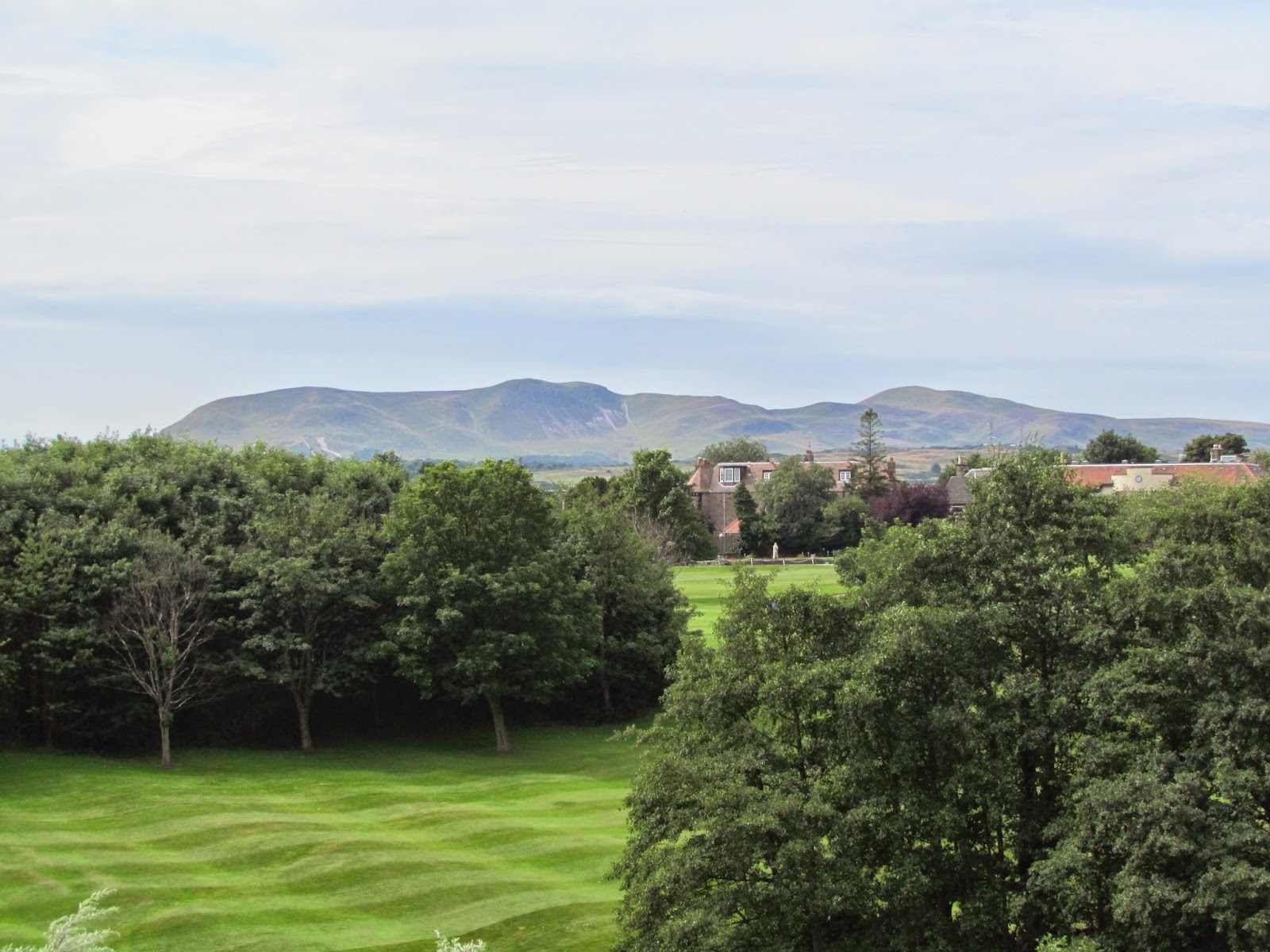 The road narrows as it passes a bend and there above her head on the left she would have seen the rock formation called Samson's Ribs. 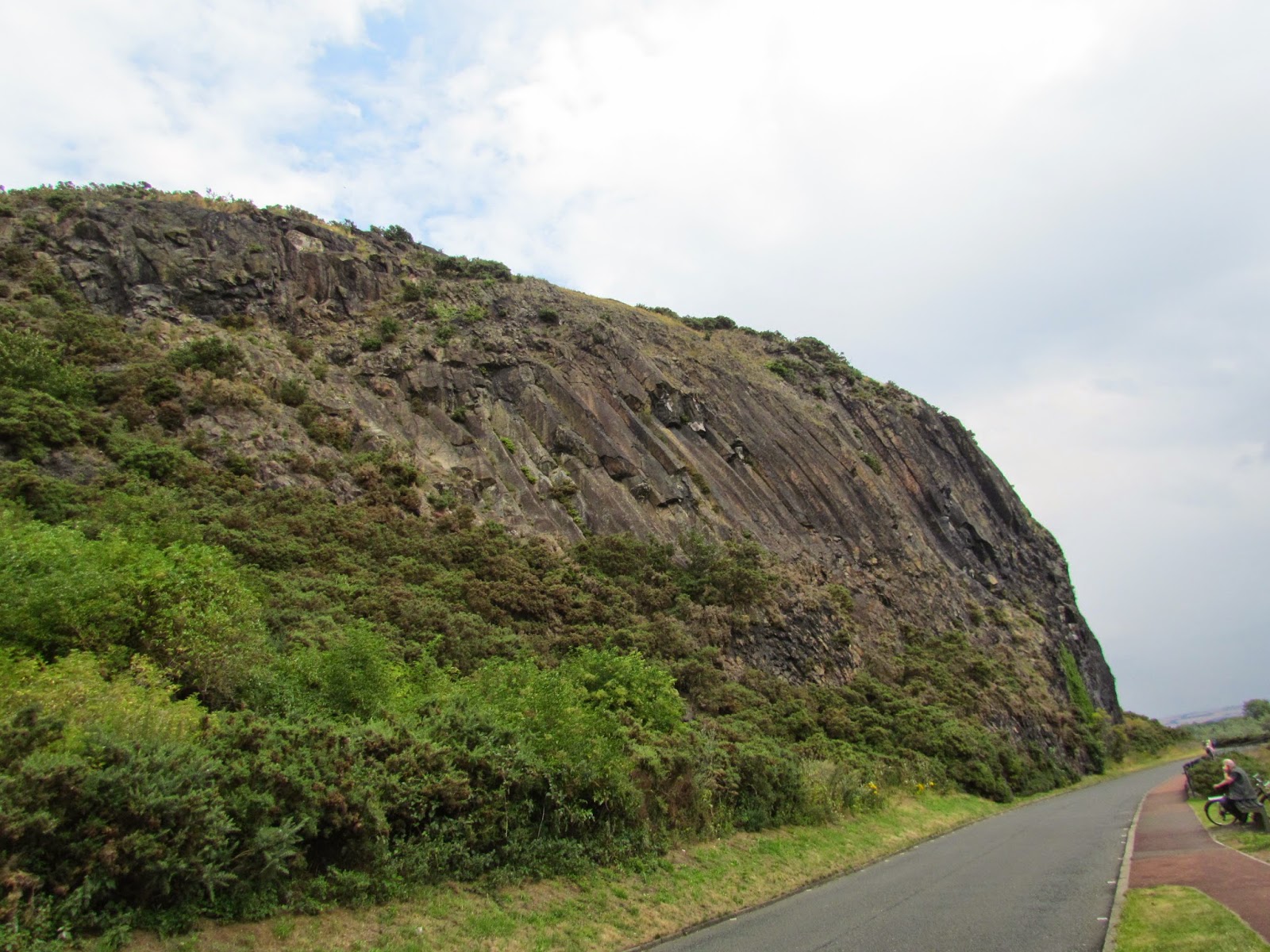 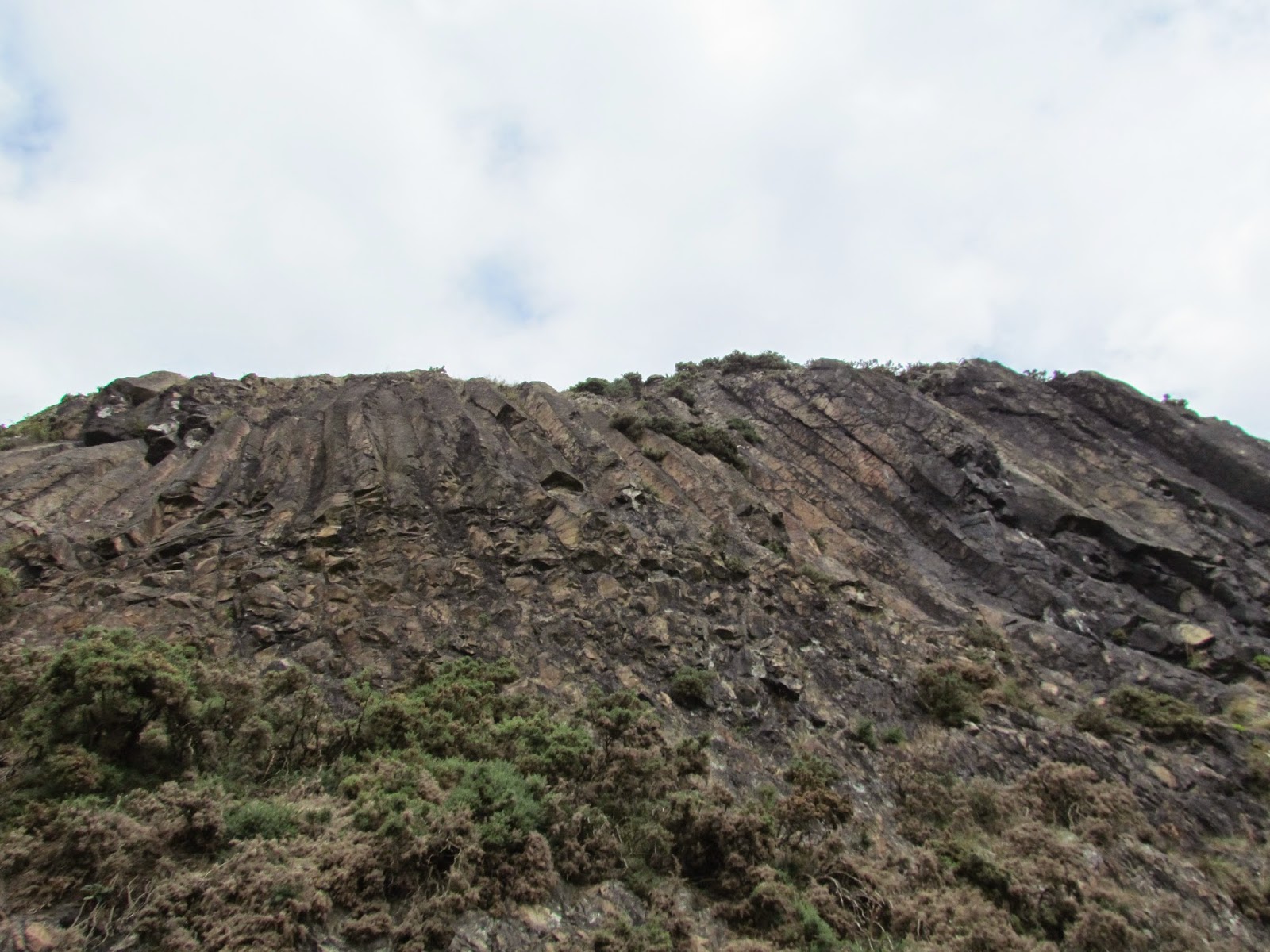 Soon she would have caught sight of Duddingston Kirk by the loch of the same name, its tower nowadays scarcely visible above the trees and the gravestones dating from some time after Mary's death. 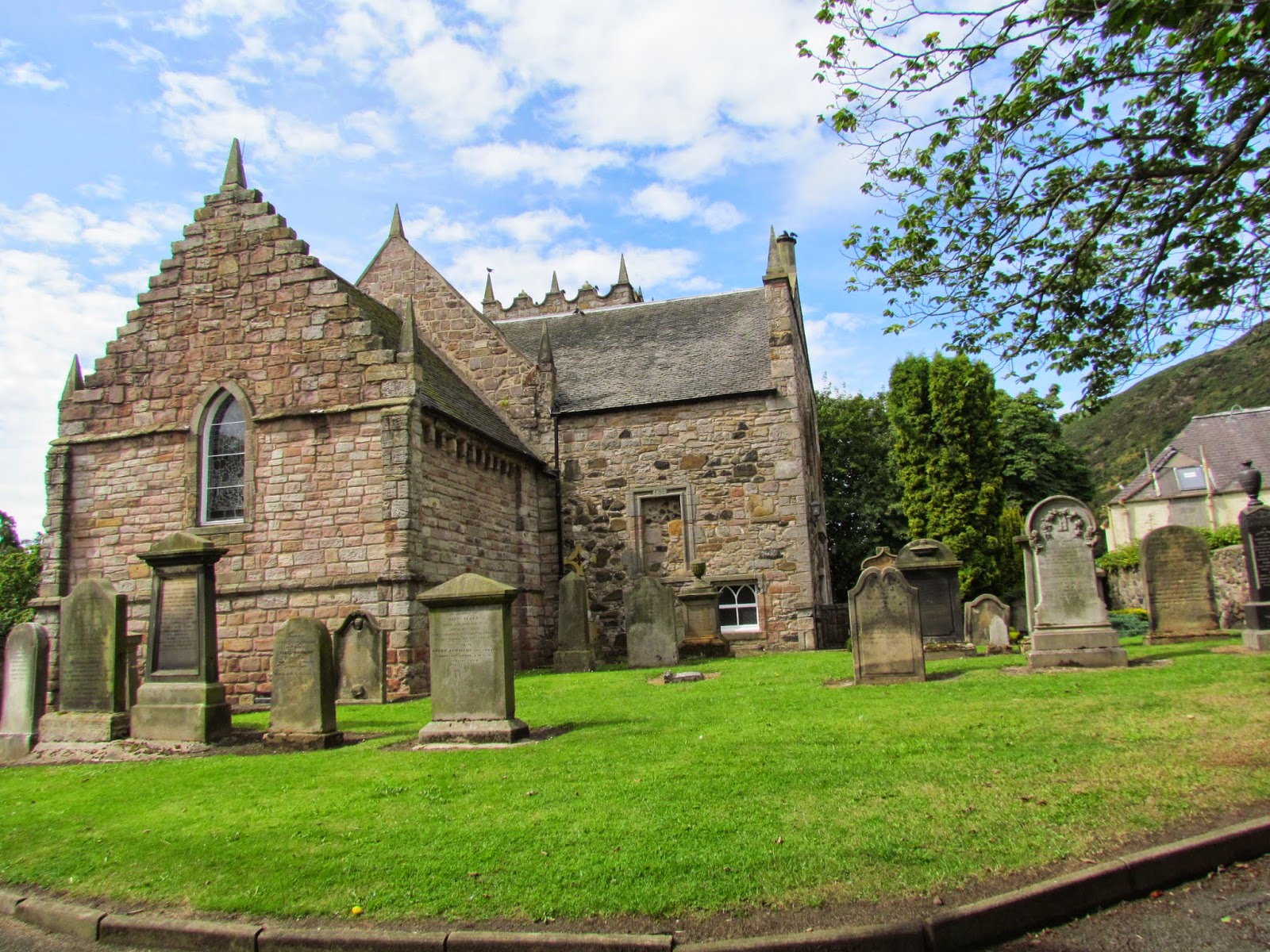 Turning right, she would have ridden through the settlement of Craigmillar, in Victorian times the site of half a dozen or more breweries, most now demolished. Spurring her horse up the hill, she would have seen Craigmillar Castle at the top of the wooded rise and, on looking back, Arthur's Seat (nowadays with two ghastly blocks of high-rise flats in front of it).

Although the castle is so closely associated with Mary, she did not build it. In the fourteenth century, the de Preston family had received the land from the King in return from providing an archer for the army. Prestonpans on the Firth of Forth also belonged to them. The Prestons started building Craigmillar Castle some time before 1400, starting with the tower house. The surrounding wall was built some years later.

The Preston family were closely involved with political and royal affairs, including some of the murkiest such as the murder in the Canongate in 1479 of the Earl of Mar, a brother of James III, who had earlier been accused of witchcraft and imprisoned in Craigmillar. You can still see signs of the family's occupancy: their coat of arms, held up by two monkeys, above a doorway, and a filled-in fish pond outside the castle walls in the shape of the letter P. 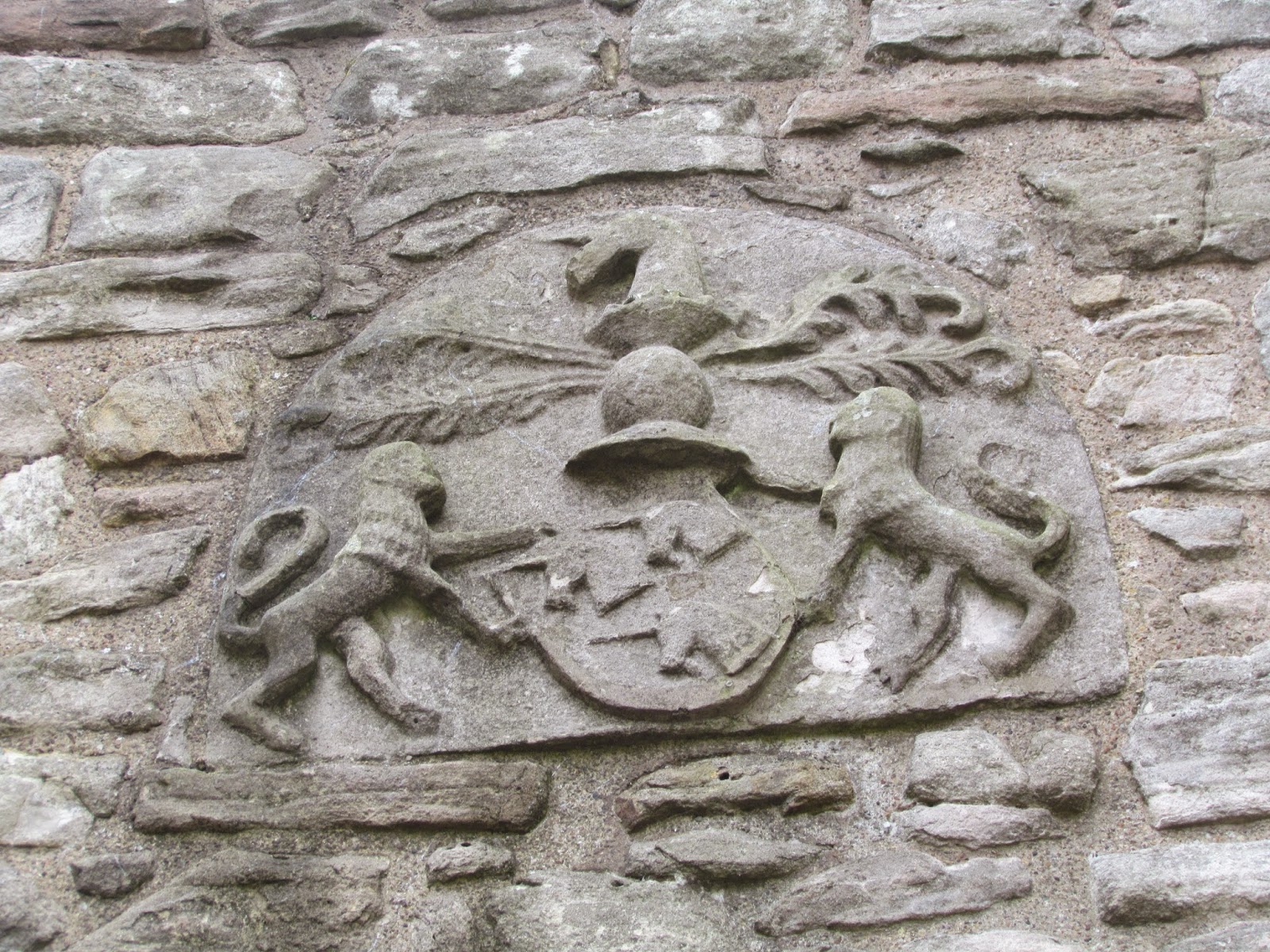 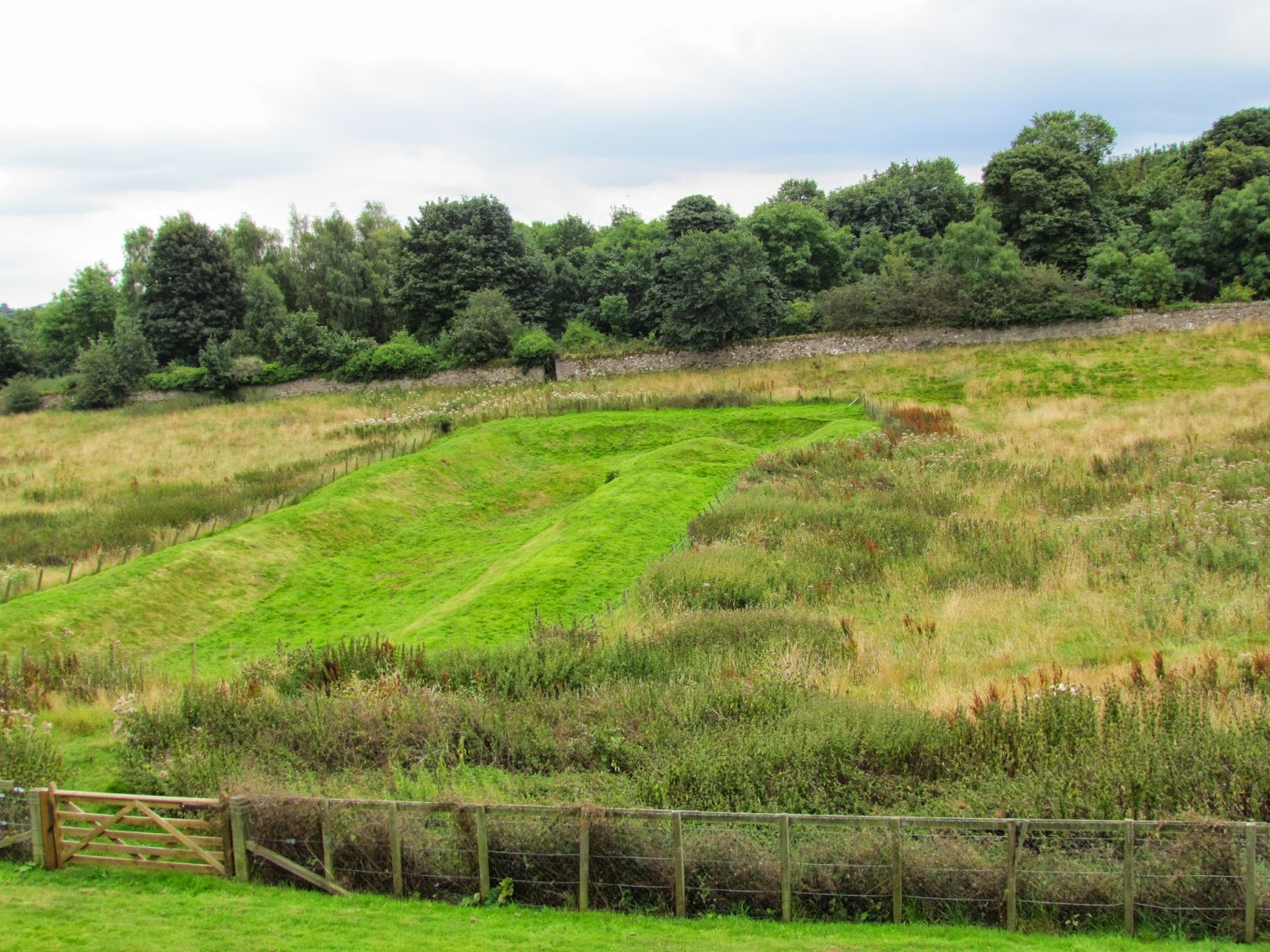 In 1544, the Prestons were caught up in the Rough Wooing, when the English landed at Leith in order to force a marriage between Mary, then just a toddler, and Edward, the young son of Henry VIII. Craigmillar Castle was captured and Sir Simon Preston, Baron Craigmillar, was imprisoned. 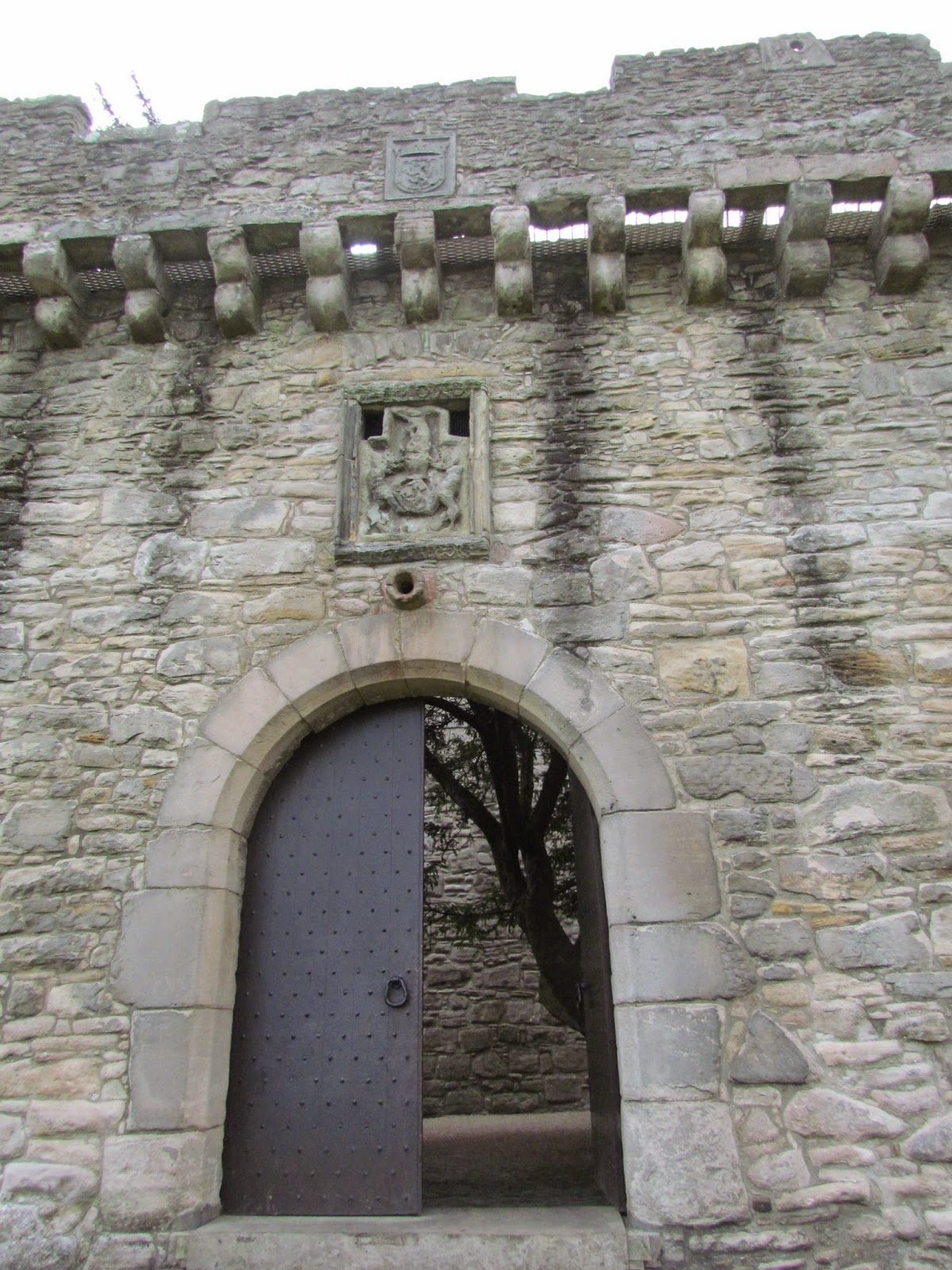 Once released, he remained a staunch supporter of Mary, following her to France when she married the Dauphin. So it is not surprising that when faced in 1563 with a momentous decision not only for herself but also for her country - the question of her remarriage - it was to her loyal friend Sir Simon Preston's country home that she went. 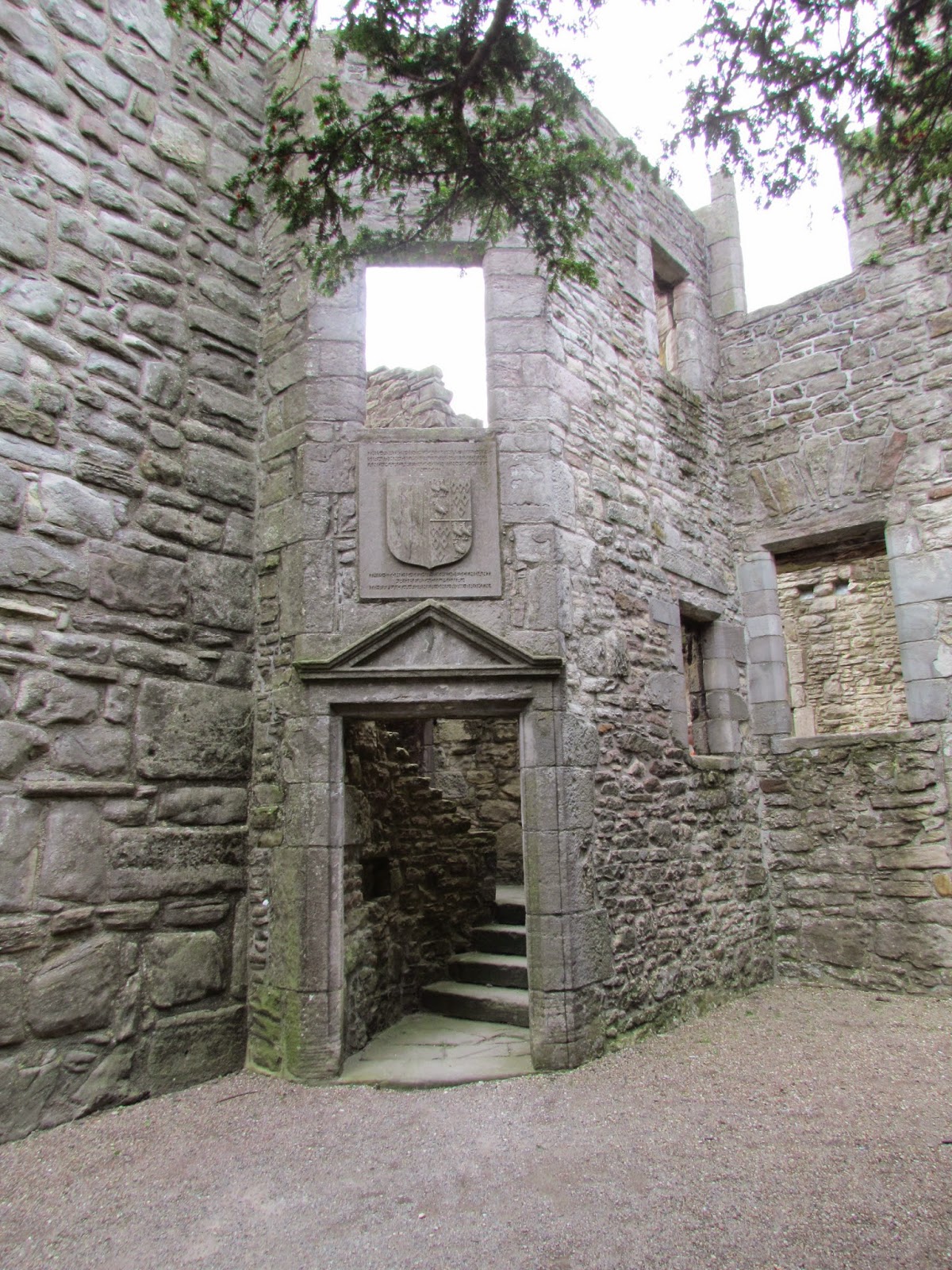 Sadly, her tranquil rural surroundings did not help Mary make a good decision. Instead she married Henry, Lord Darnley. And so the stage was set for the next act in Mary's dramatic life. Again, it was in Craigmillar Castle where the crucial decisions were made.

In 1566, Mary came back to Craigmillar in some distress. Her friend and secretary, David Riccio, had been murdered in Holyroodhouse by Darnley and his friends. Three months later she had given birth to her only child, James, shortly to become King of Scotland and then, much later, also of England. Nobody knows exactly which bedchamber she occupied as rooms changed their usages over time. The bedroom below left, which legend said was the one used by the Queen, became a kitchen later on, for example. 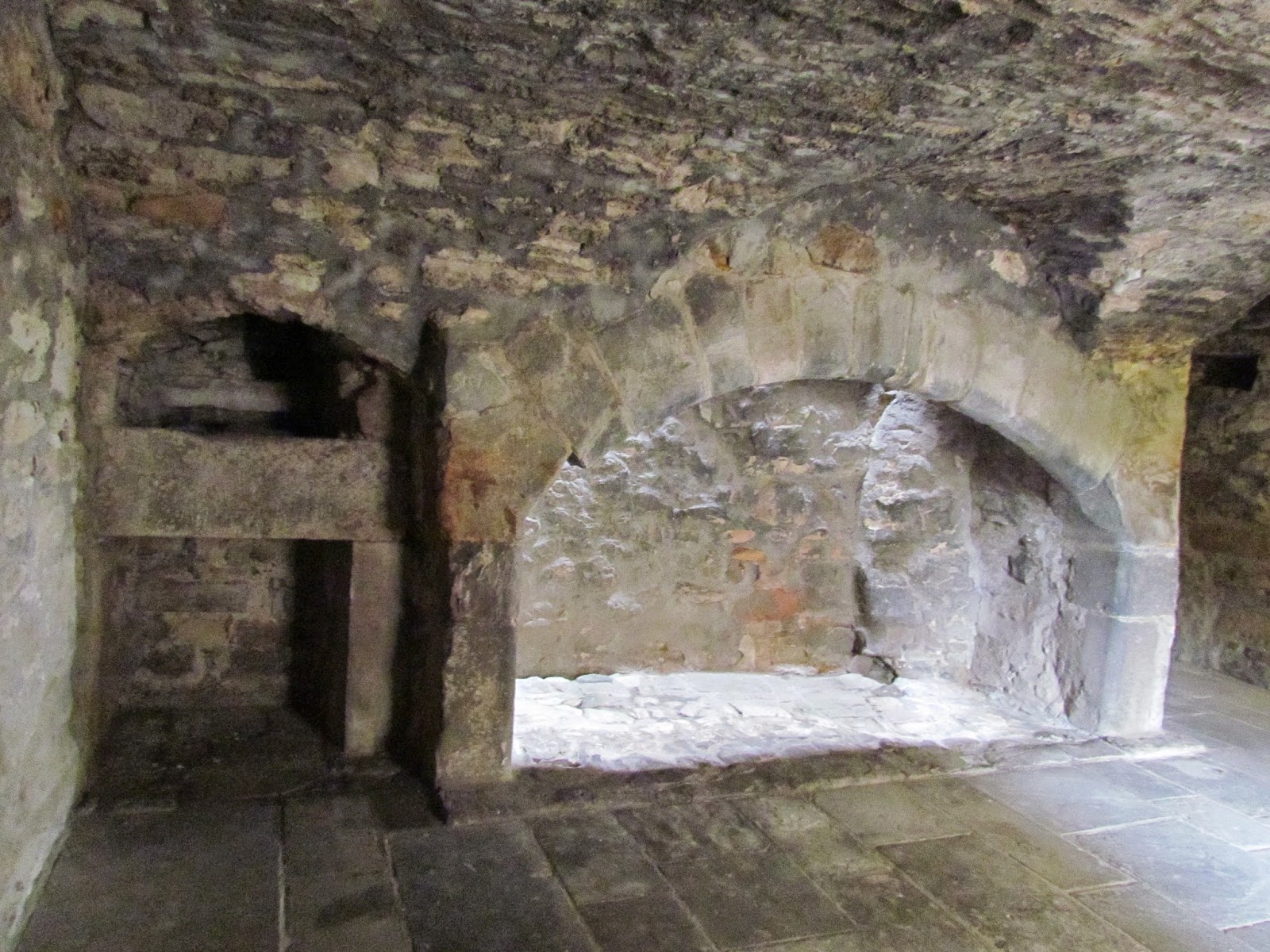 It is perhaps more likely that Mary slept in the East wing (right), a more recently constructed part of the Castle. 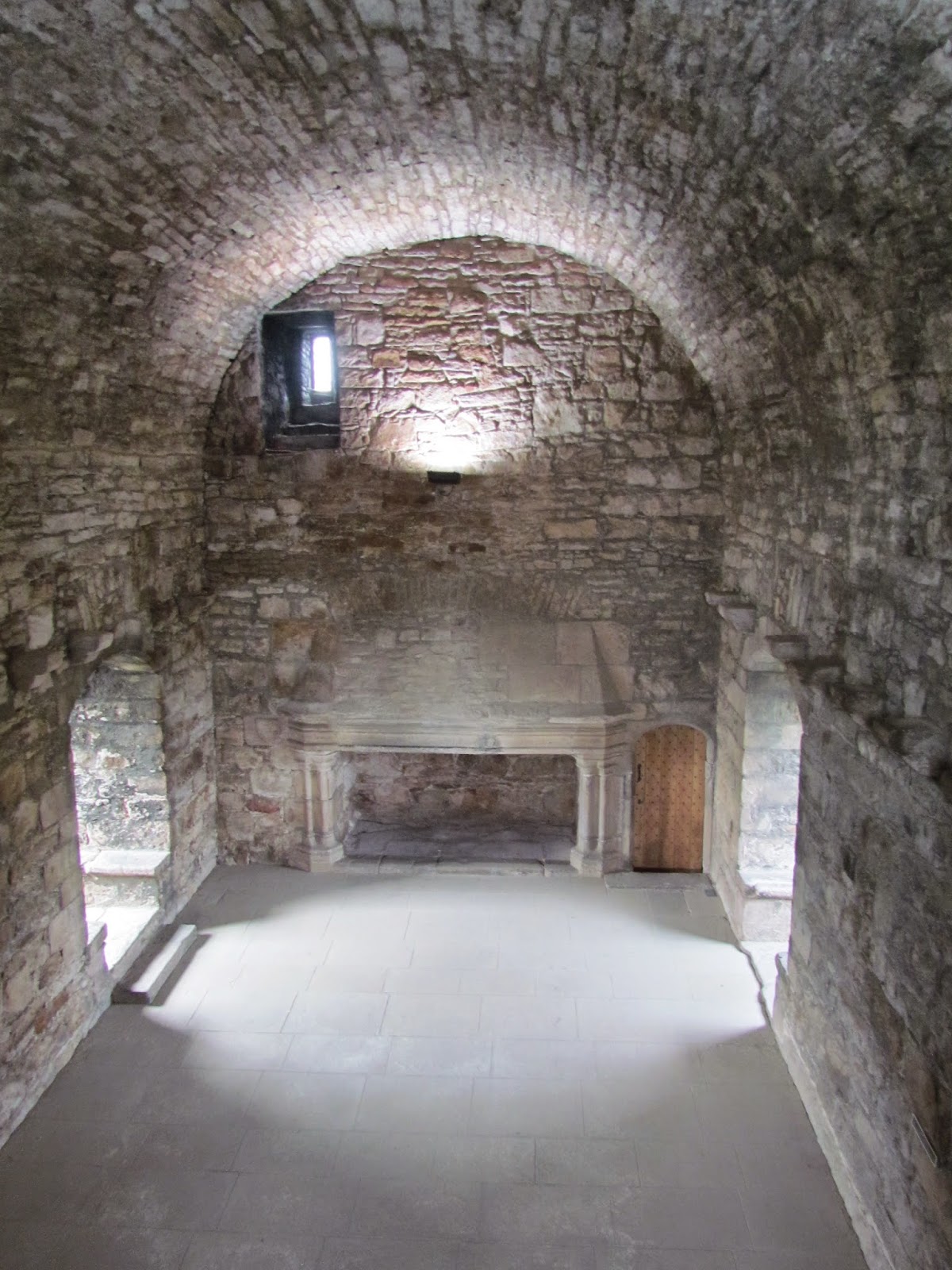 Wherever it was she actually slept, Mary was certainly heard weeping at night, appalled at her husband's out-of-control and domineering behaviour. We do know where she would probably have dined, on those occasions when she accepted the hospitality of Sir Simon. Here is the Laird's Hall, with its huge open fireplace. 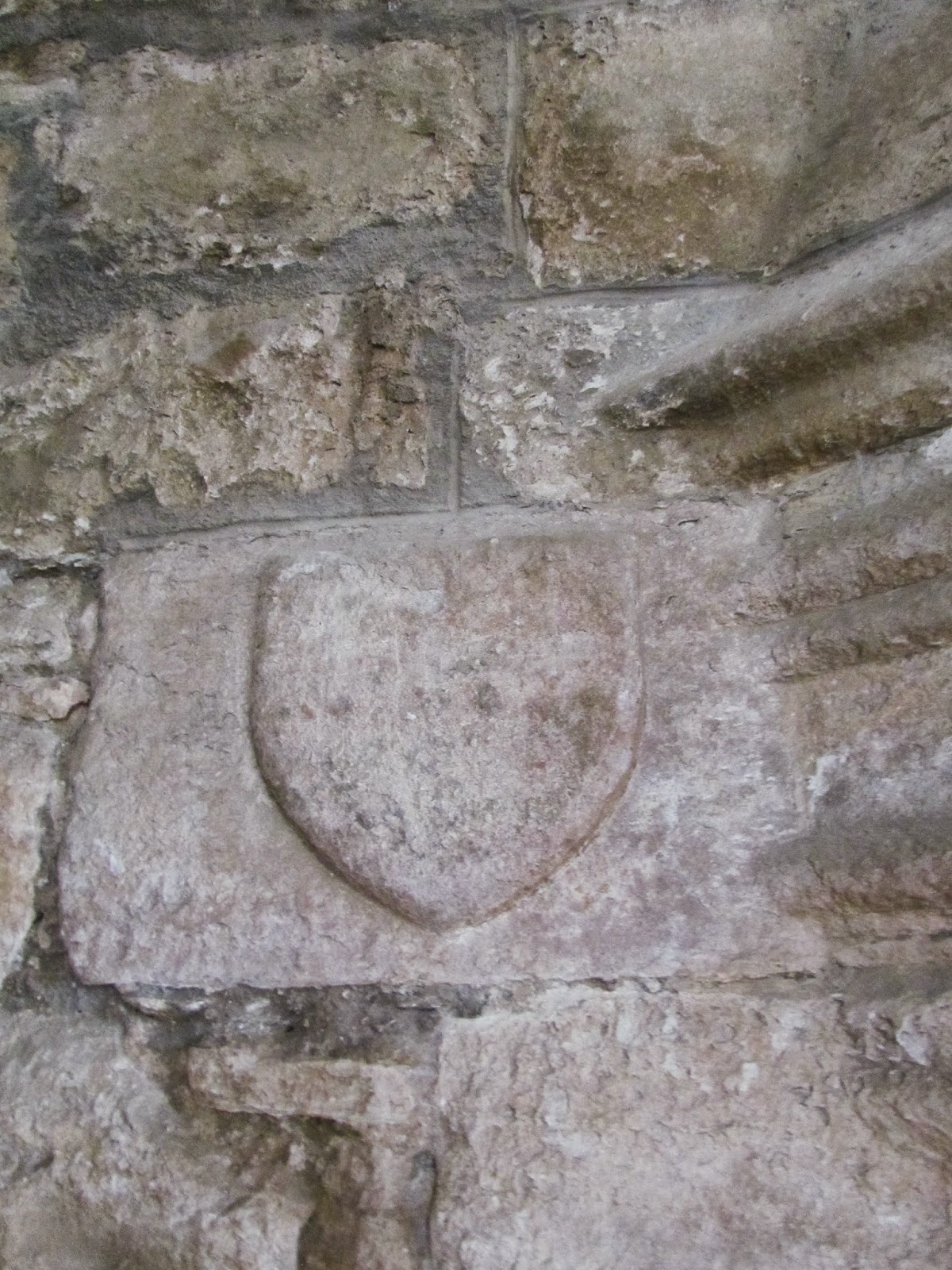 On the left of the fireplace, you can see a shield which was once painted with the Preston coat of arms. Above your head are the stone supports for the wooden ceiling along each wall. The walls would have been plastered and painted.

It was while she was here in Craigmillar that a group of Mary's advisers, the earls of Argyll, Huntly and Bothwell among them, met to decide what to do about her impossible husband. The decision was to murder him. Darnley was strangled at Kirk o' Fields in the Old Town, and his house then burnt down. Bothwell then married Mary.

Matters went from bad to worse. Captured by Protestant noblemen, Mary was actually imprisoned by Sir Simon Preston himself, her once-loyal supporter, in his own house on the High Street. He then took the Queen to her prison on the island of Lochleven near Kinross, where she remained until forced to abdicate in favour of her one-year-old son.  The rest of Mary's story, interesting as it is, does not belong here, so we will return instead to Craigmillar, the castle to which she retreated.

The walkways around the battlements would have made a pleasant place for Mary to stroll.  Looking out over the Preston's private chapel and the busy courtyard she would have been able to see as far as the coast on clear days. In the other direction, she could see the Pentland Hills and the area in front of them where her courtiers were living, which is still called Little France to this day. 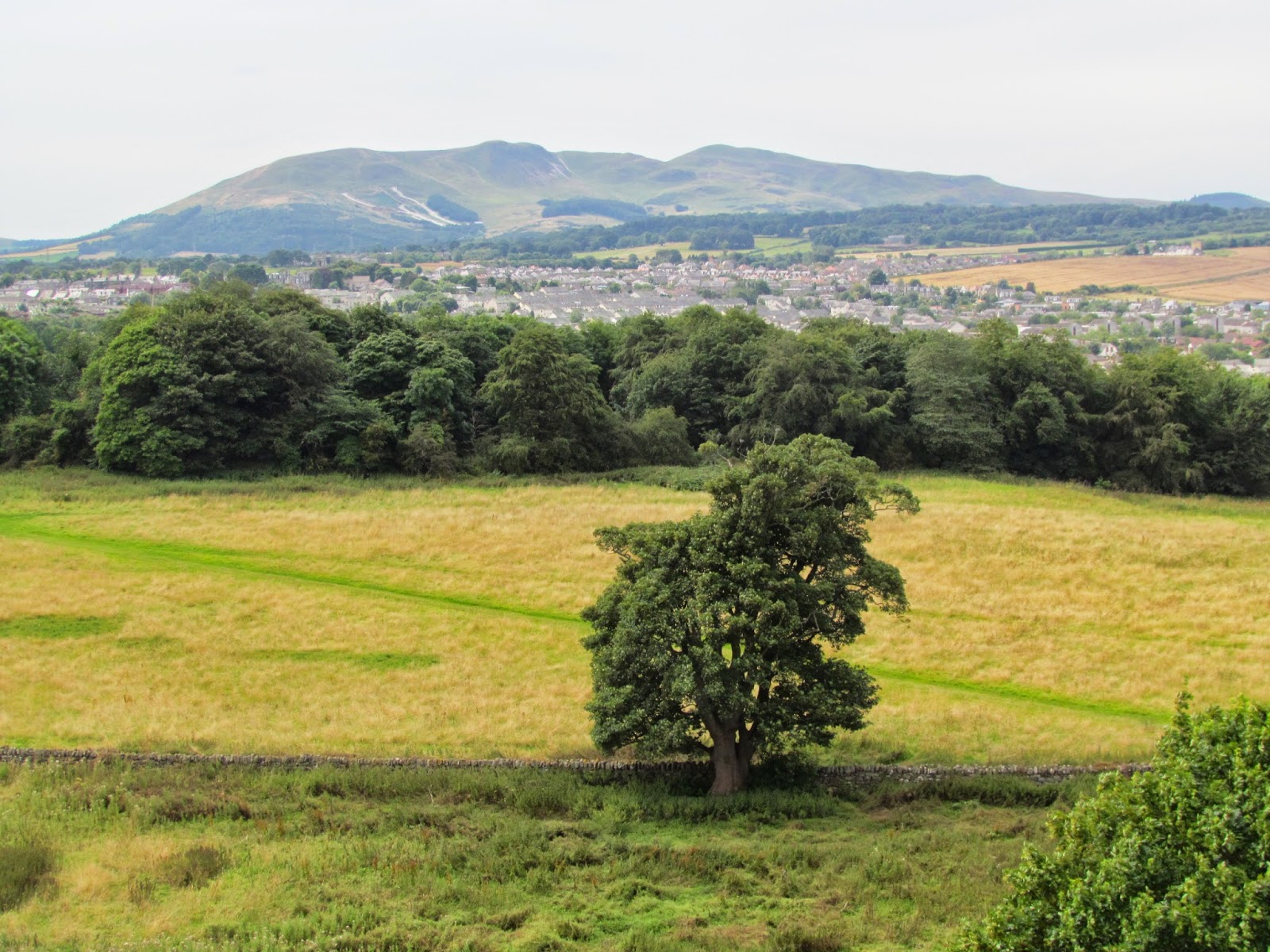 Yet, despite its pleasant prospects, Mary would have been left in no doubt that this was a fortified house and that she was being well protected. Not only did observers on the castle walls have a 360 degree view of the surrounding area, so that they could easily spot any unwelcome visitors, but the walls were thick and punctured every so often by arrow slits and gunholes. 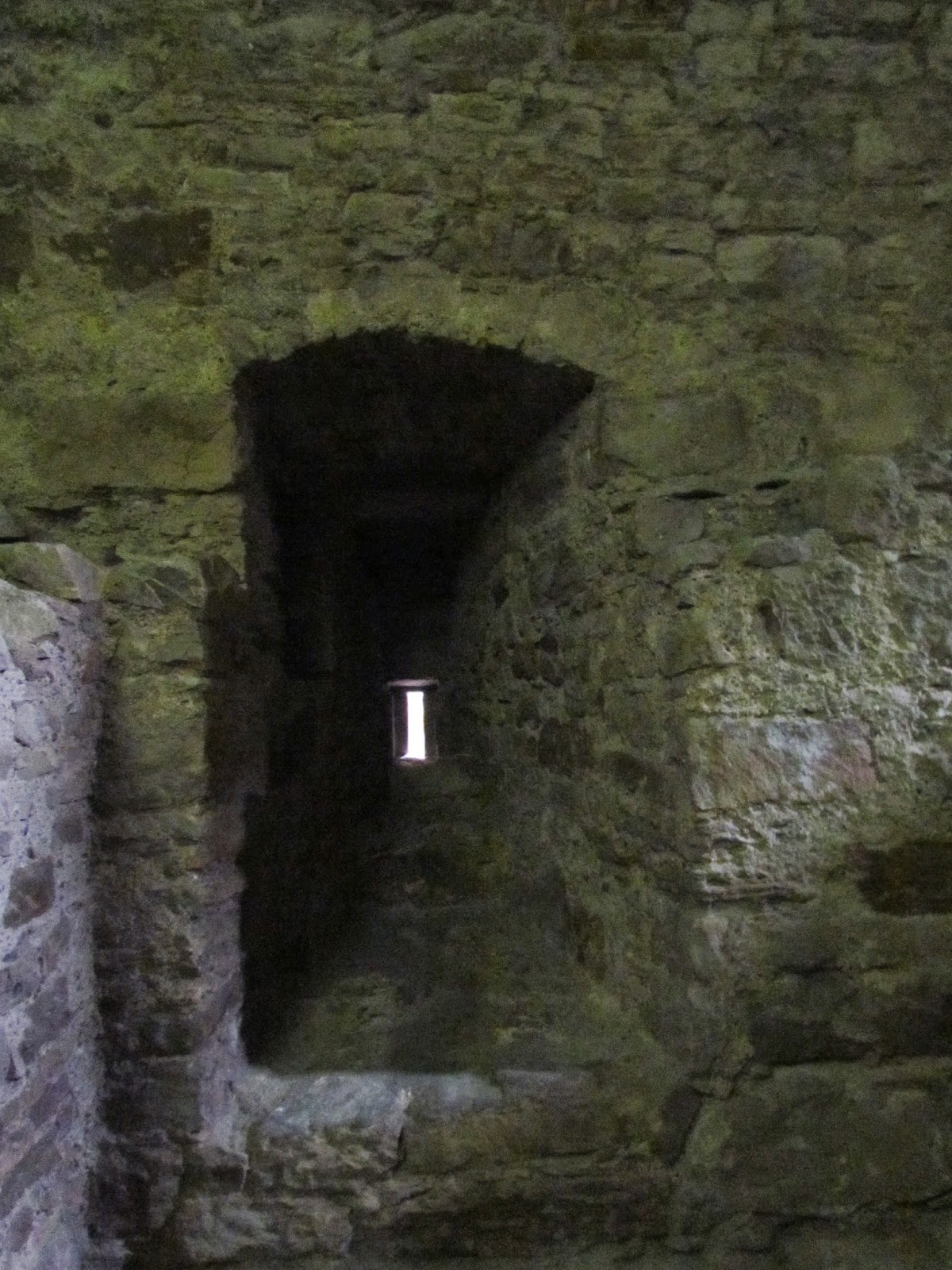 Difficult to see out of an arrow slit! Once within the castle, her best views would have been towards the internal courtyards. Don't be misled by the wide window below right. It was put in by a later owner of the castle. 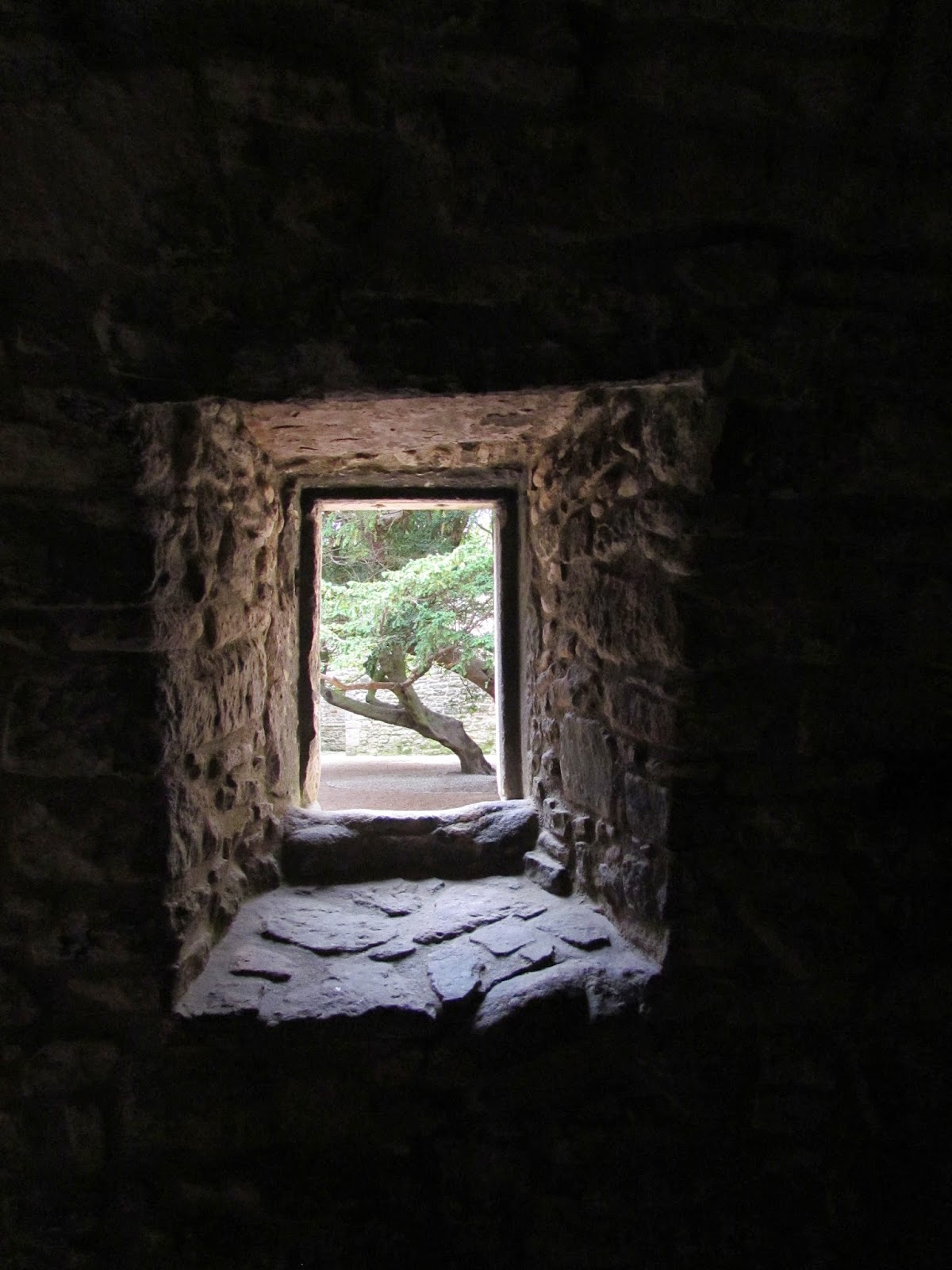 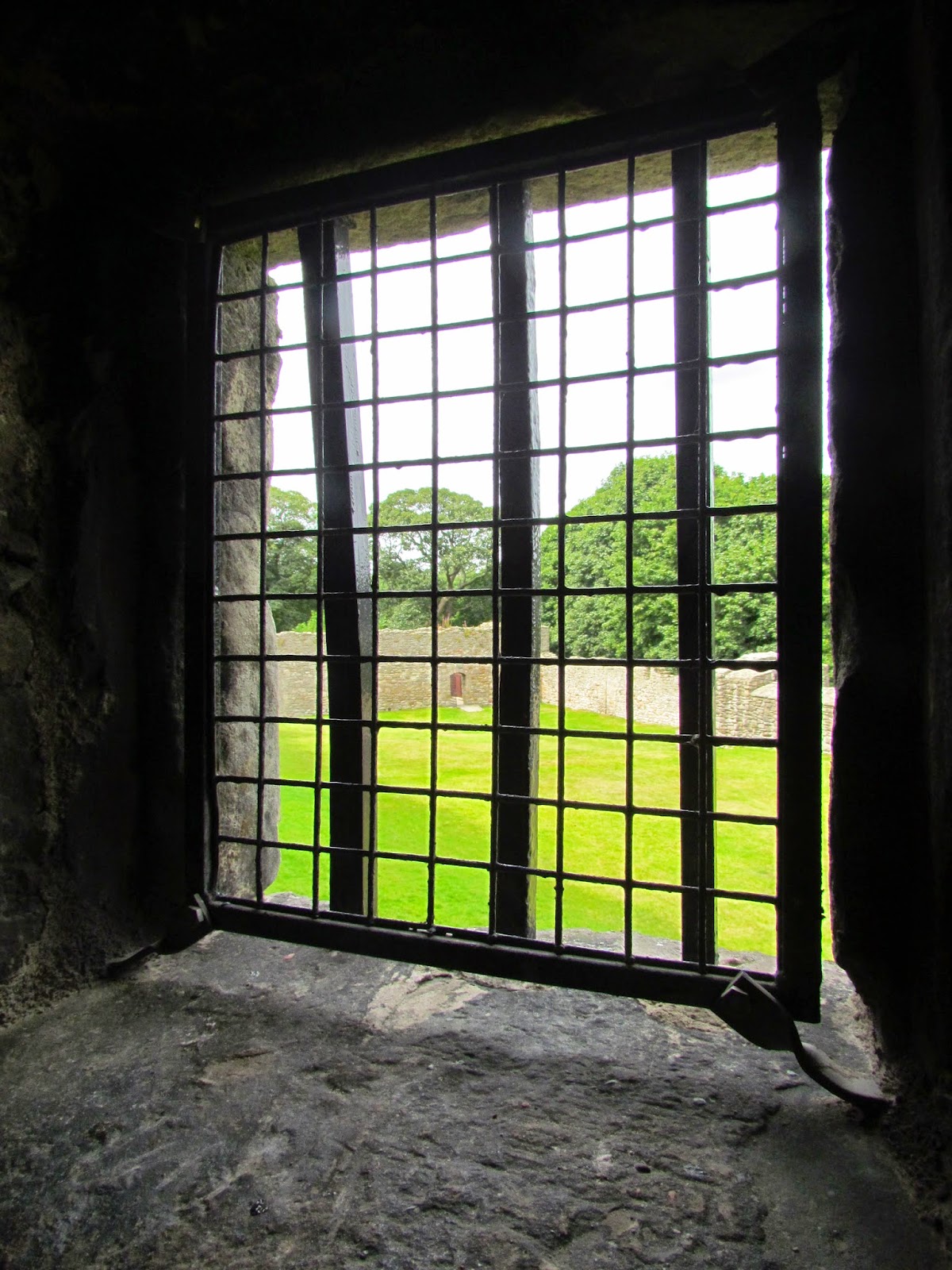 However, Mary left, in time the Prestons left and in 1660 the castle passed into other hands, those of the Gilmour family. Sir John was a lawyer rather than an aristocrat and decided that he needed something rather grander. Across the entrance courtyard from the doorway below, he built the West Wing. It had a splendid drawing room, a kitchen next door with an enormous fireplace and a spiral staircase down to an ample wine cellar. 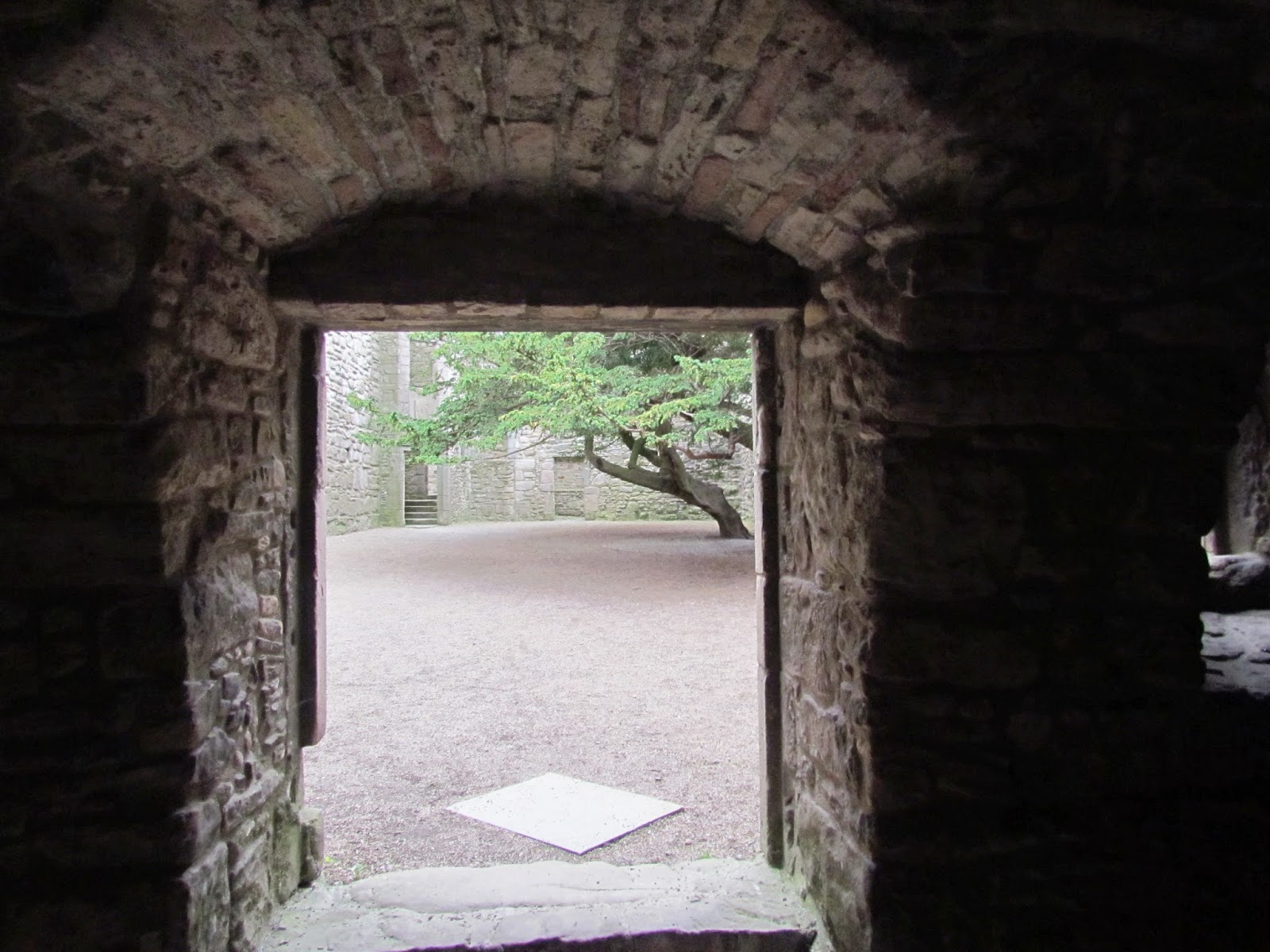 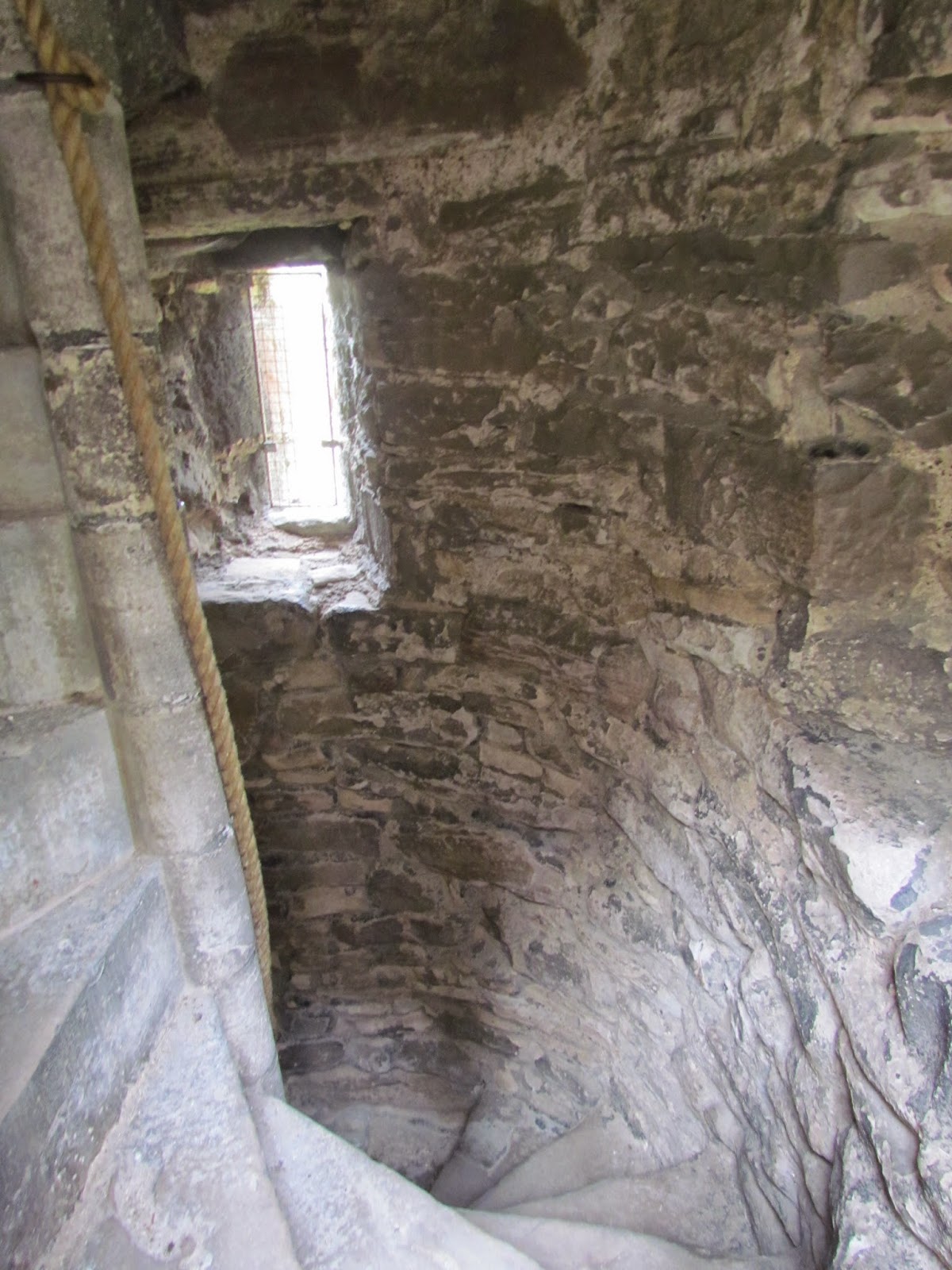 The Castle even acquired a Presbyterian Kirk for the use of the nearby community of Liberton.

And there we will leave Craigmillar Castle. It eventually fell into disuse as the upwardly mobile Gilmours moved on to another more impressive and more modern house at Gilmerton. However, the structure remains as solid as ever and, indeed, there is much more to see than the small selection of views I have shown you here. It took me a long time to get round to visiting Craigmillar as there are so many wonderful places to see in Edinburgh itself. Don't make my mistake. This splendid castle is well worth a visit. 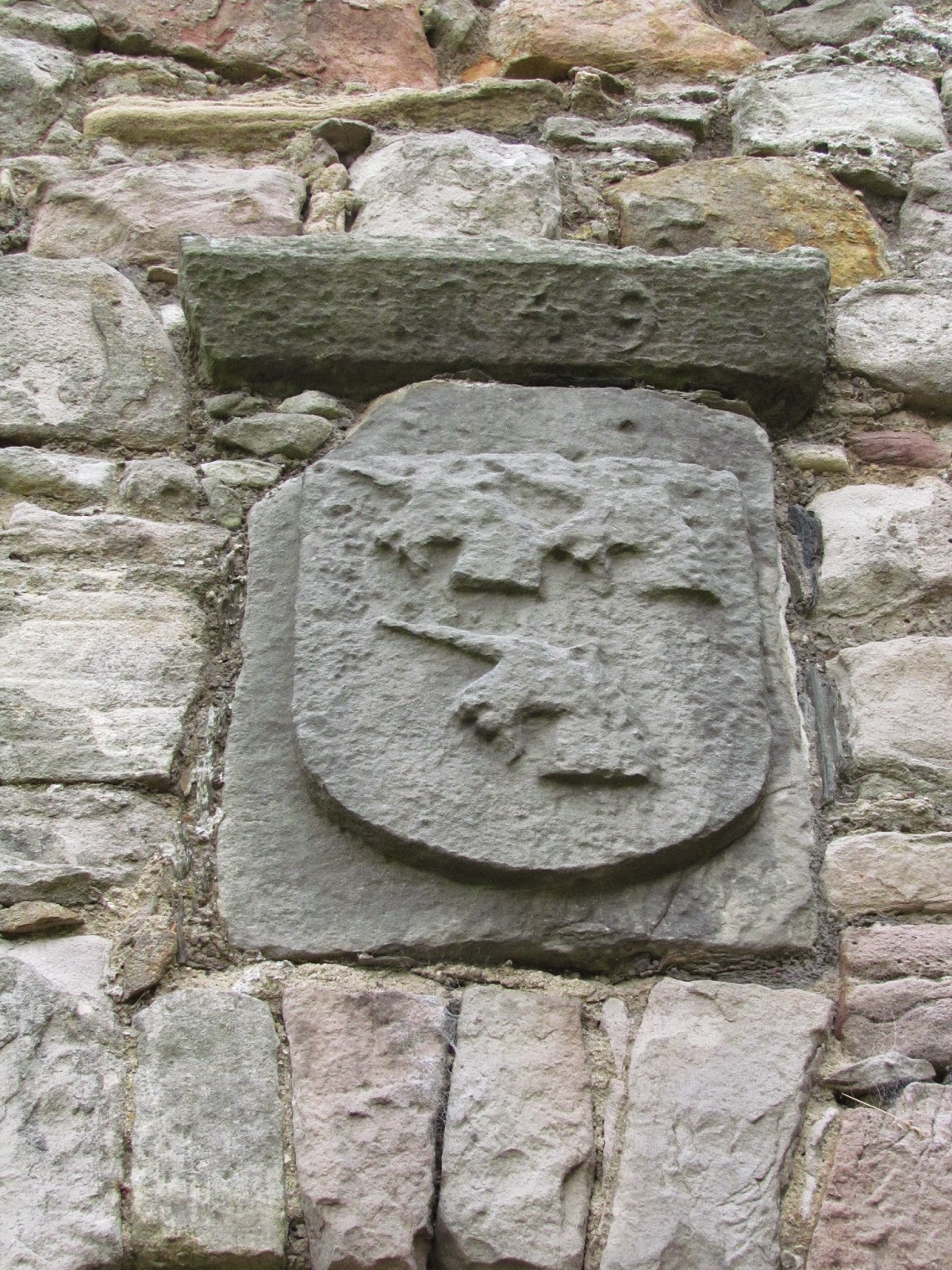 NB. This post is much indebted to the excellent guide to Craigmillar Castle produced by Historic Scotland.

Posted by Elisabeth Ritchie at 21:14