An unexpected encounter with two sad Queens in Peterborough

Bloody ethnic and political conflict, heart-breaking betrayal of family trust and loyalty and some adroit political manoeuvering. That is the story of Peterborough Cathedral over the ages. Much like our own era, then.

I knew very little about Peterborough when we turned off the busy A1M. I was aware that, once a rural market town, it was now a dormitory for London - so much so dull. I also had a vague memory of its cathedral. This post is therefore about our discoveries: some stunning architecture, a distillation of some of the most troubled years of English history in one small spot and a surprise encounter with two sad Queens: Queen Katherine of Aragon and Mary Queen of Scots, both very far from home. 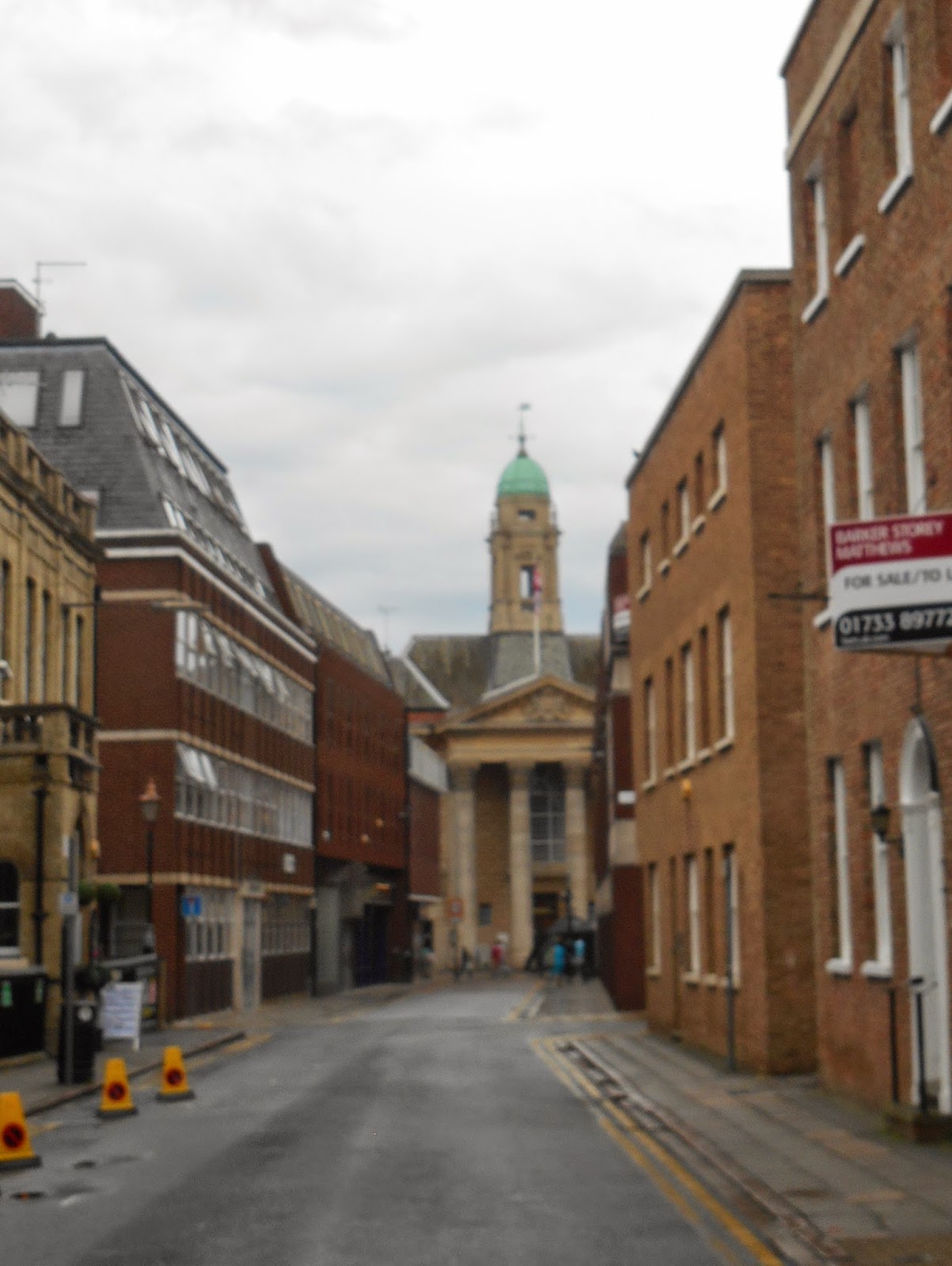 At first sight, there is little that is remarkable about the city of Peterborough. The streets are characterised by bland modern structures with, here and there, an interesting old building squeezed in between. 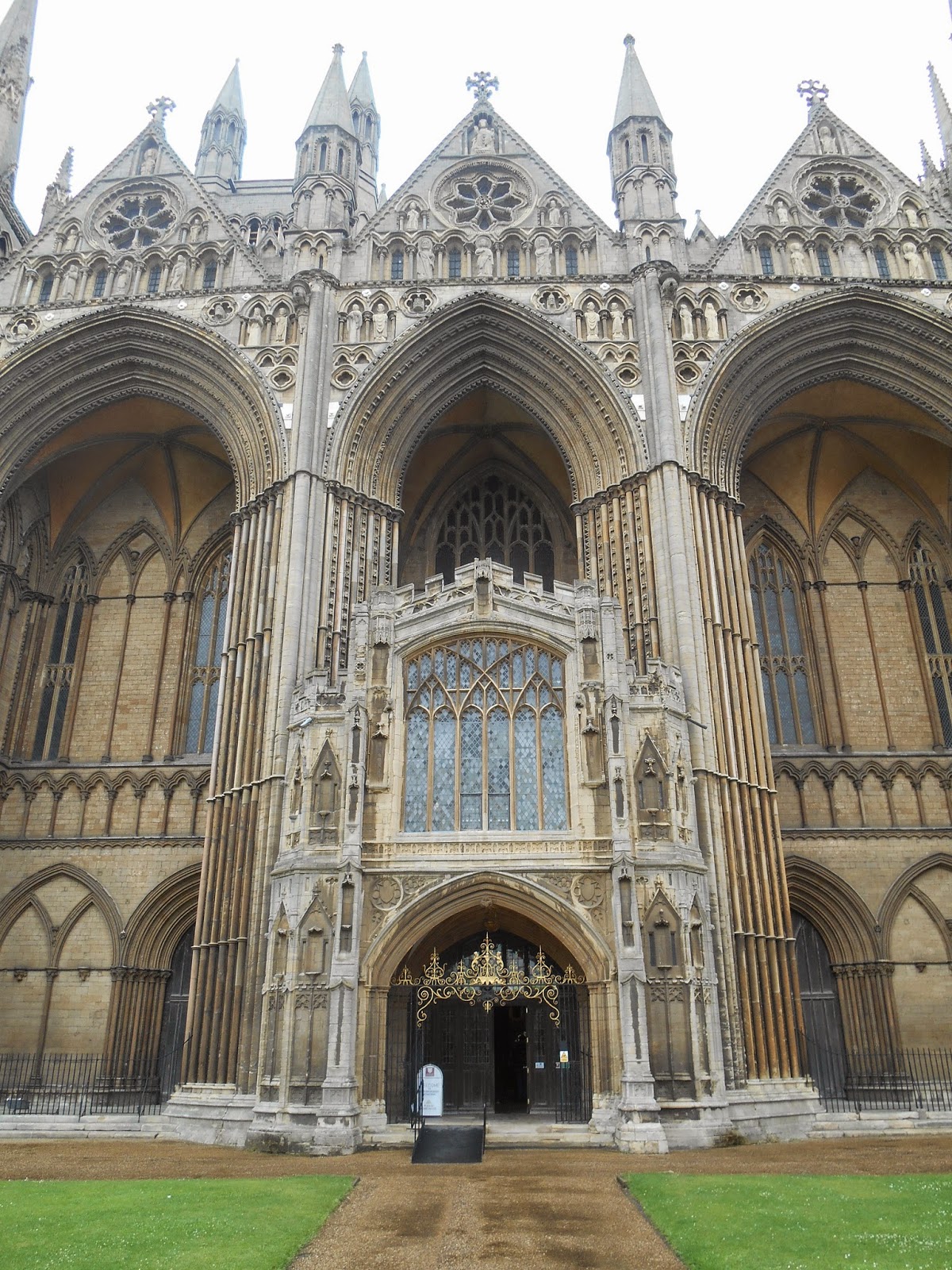 However, turn to the right at the market square and you are faced with one of the most wonderful cathedral facades in the British Isles. It was built in the early 13th century, seven hundred years after its original foundation as a Saxon abbey.

All that is left of those early days is the intriguing Hedda stone, used in the year 870 to mark the mass grave of Abbot Hedda and his monks, slaughtered by Vikings. 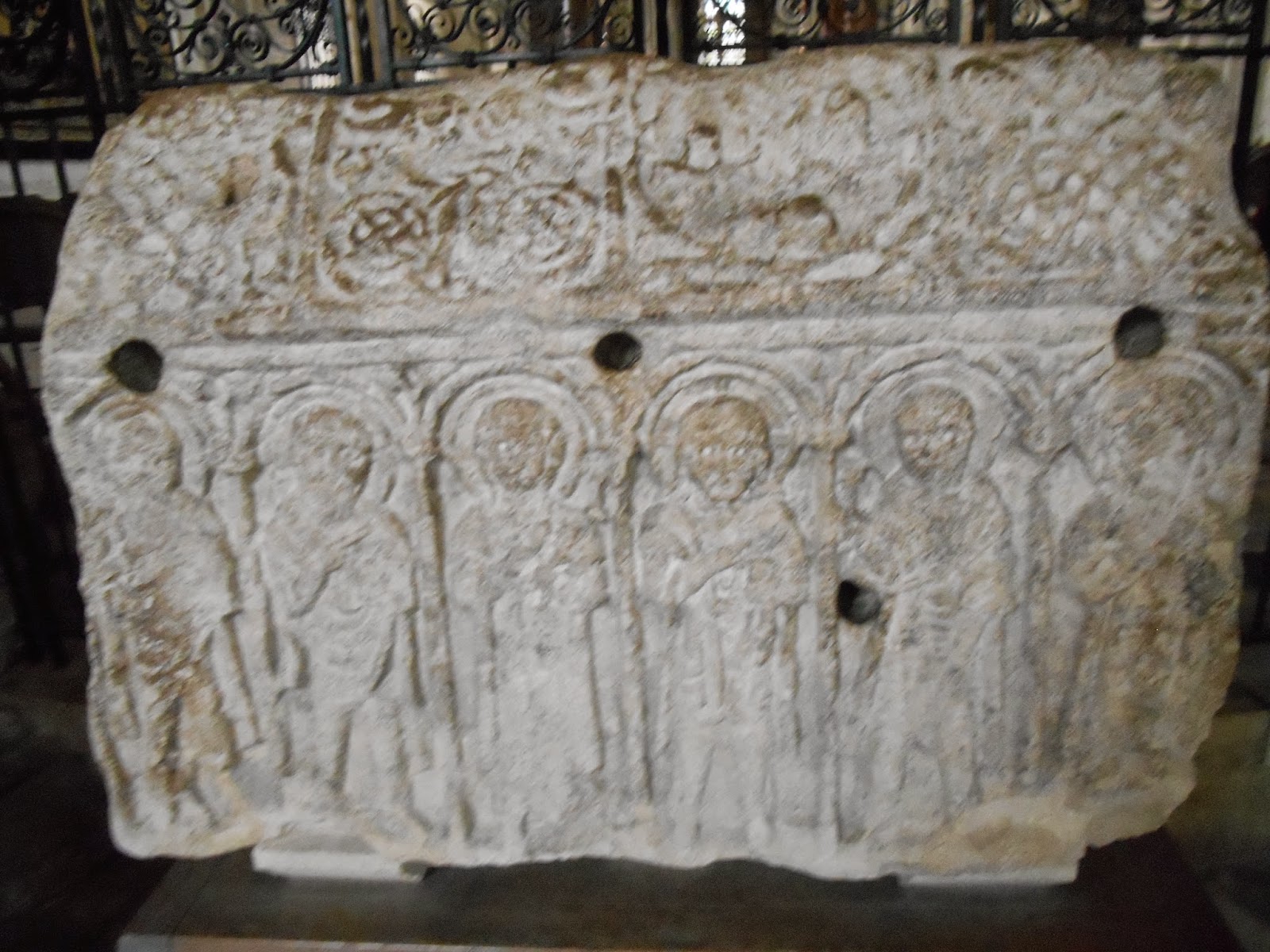 The abbey was rebuilt by Benedictine monks from France in the late 10th century, then attacked again in 1069, this time by the English freedom fighter, Hereward the Wake. Hereward led guerilla raids against the Norman French invaders from his powerbase in the nearby fens.

Judicious acquisition of a number of relics, helped Peterborough become a centre of pilgrimage. These relics included the arm of St Oswald, 7th century King of Northumbria, and a blood-stained shirt and two phials of the blood of St Thomas a Becket. (See the post on Canterbury). Other treasures included illuminated manuscripts like the Ramsey Psalter and a great deal of silverware.

None of the relics remain. Indeed, the abbey church itself was lucky to survive the Dissolution of the Monasteries. The sixth richest abbey in England, Peterborough was a very attractive prospect for cash-starved King Henry VIII. However, its wily abbot, John Chalmers, very sensibly decided to cooperate rather than resist. In 1539, he voluntarily handed over the abbey and its lands to the King who conveniently gave him the job of overseeing the property. In due course, the King made the town a city, the abbey a cathedral and Chalmers its first Bishop. He even founded a school. The survival of one of the loveliest churches in Britain was thus ensured. 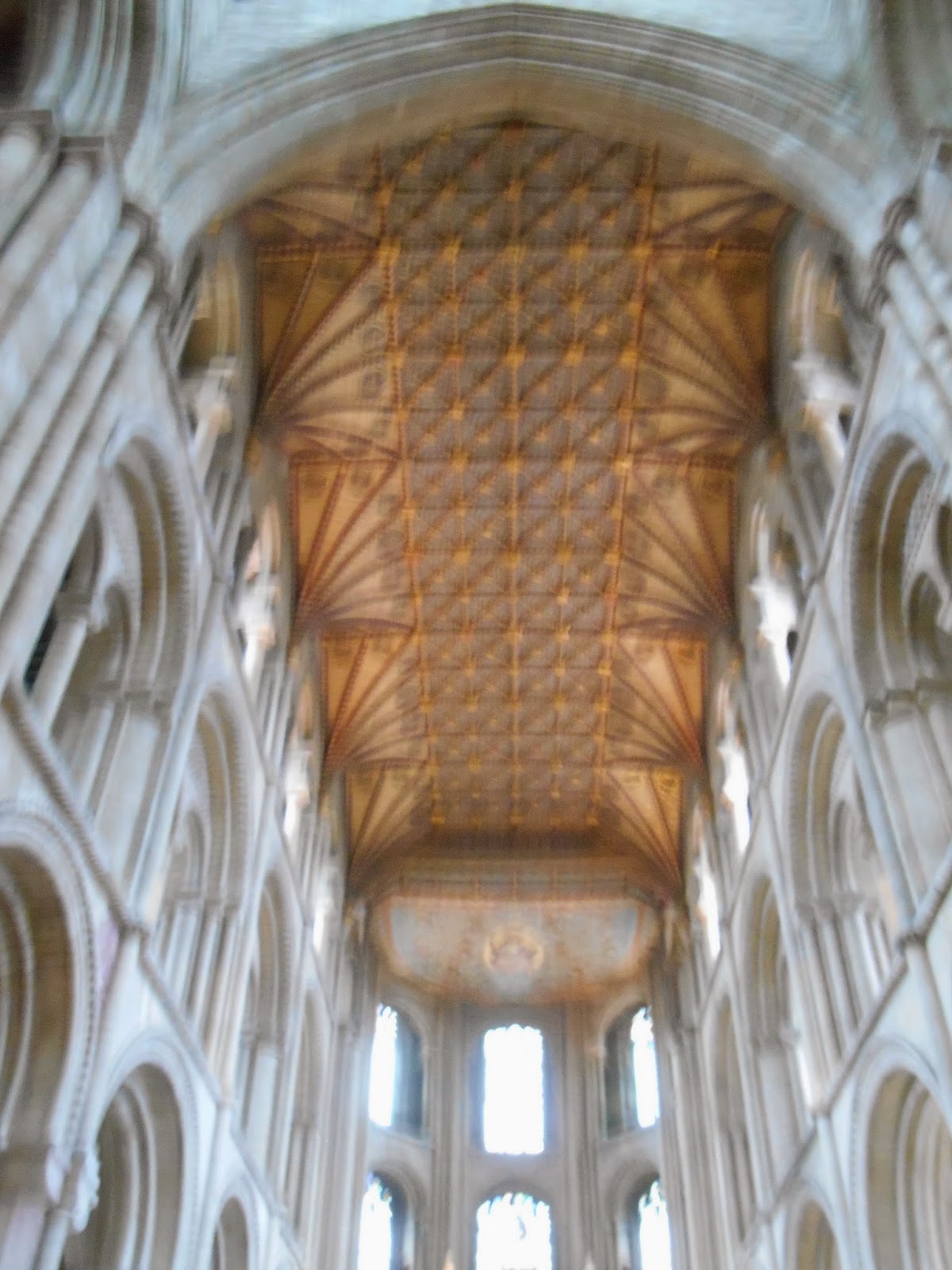 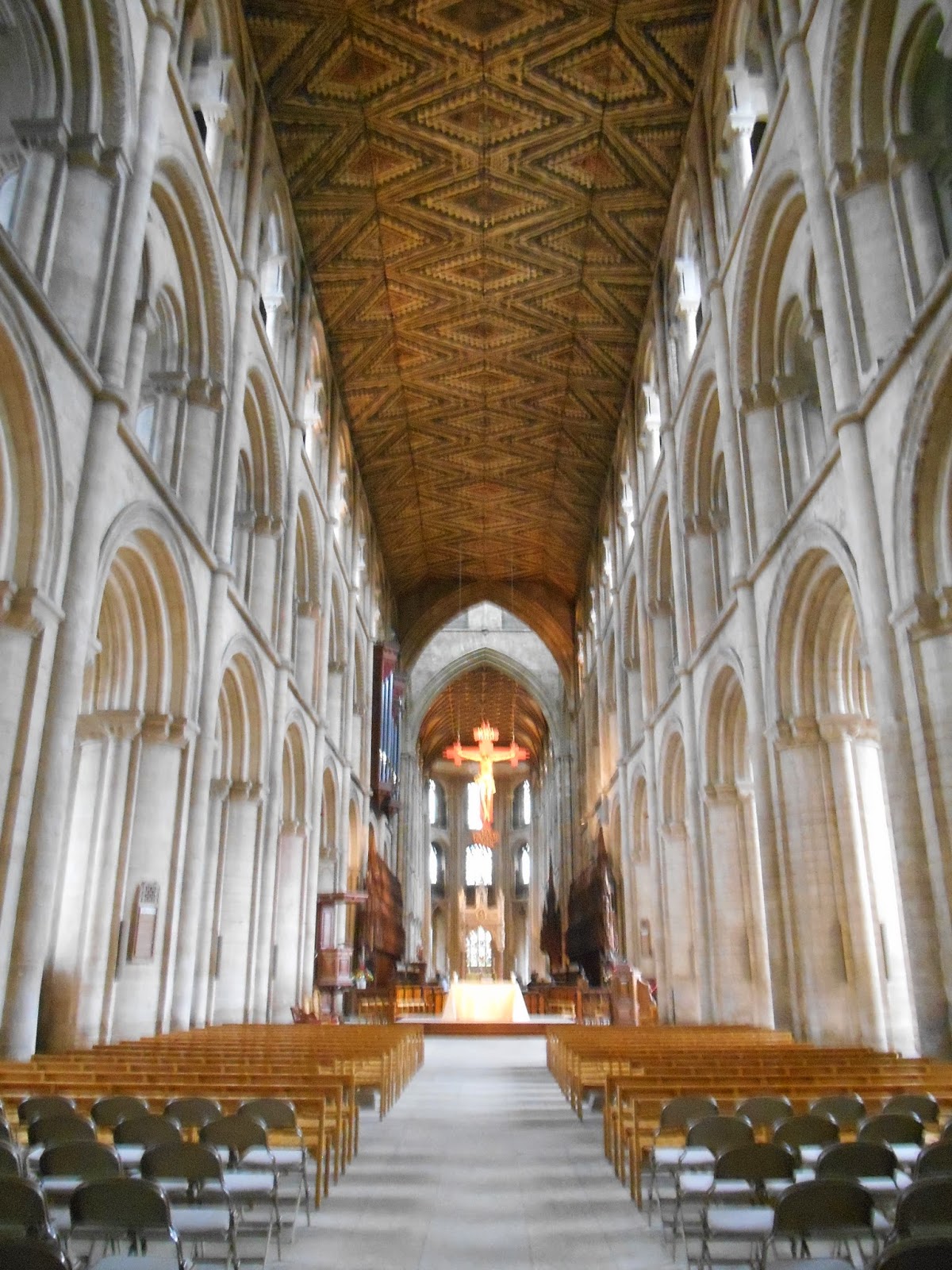 The beauties of Peterborough cathedral are all around you. However, don't forget to raise your head. The Nave (left) has Britain's only surviving 13th century wooden ceiling. The vaulted ceiling of the Presbytery (right) is early 16th century. 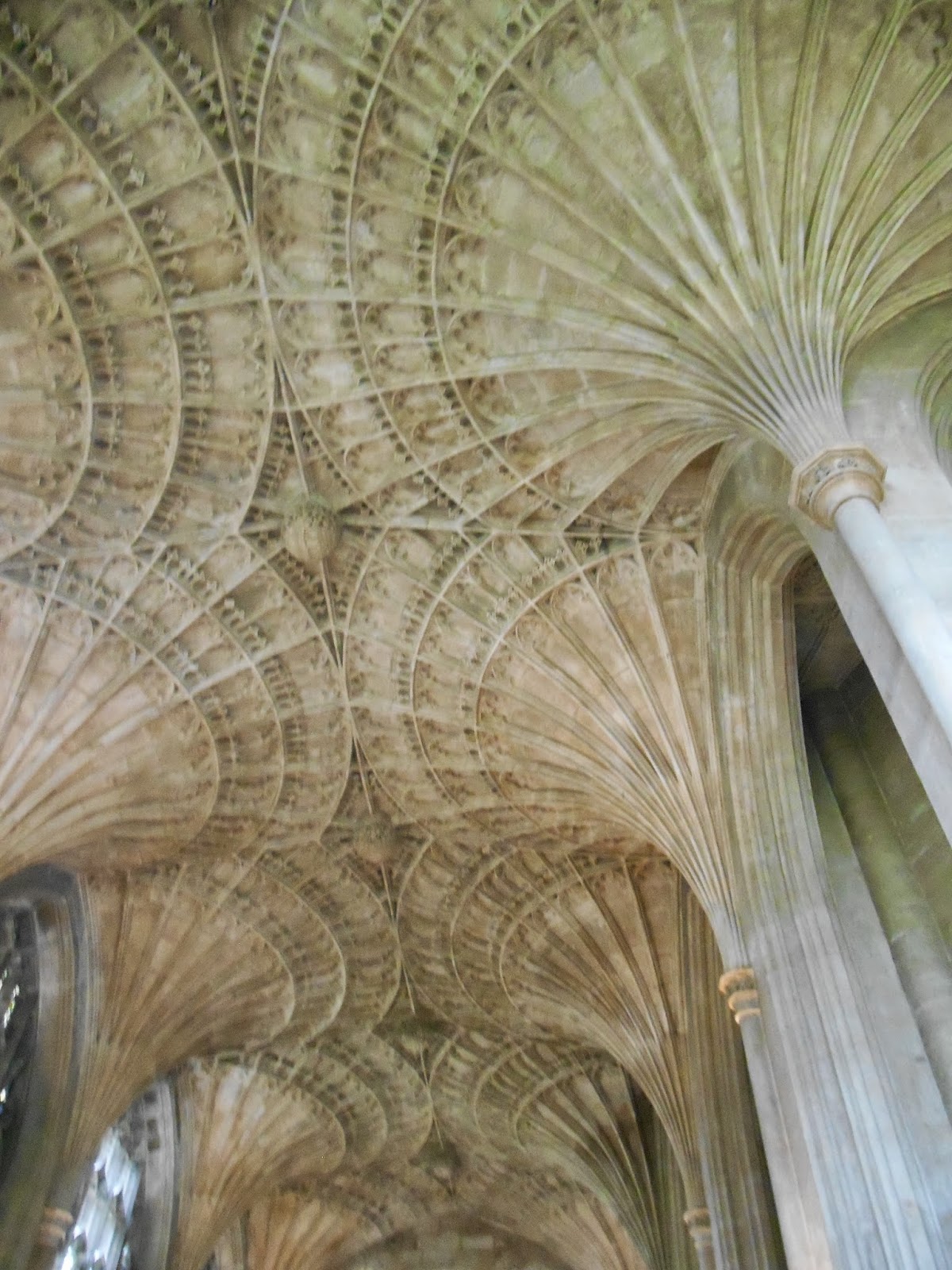 One of its glories, however, is in the 'New Building' (right). If the ceiling looks a bit familiar to, you, it probably is. The design of the delicate fan vaulting, constructed between 1496 and 1509, was reused and developed by its architect, John Wastell, in King's College Chapel, Cambridge.

The cloister still partially survives. Around its secluded quadrangle the monks used to pace as they read their prayer books. 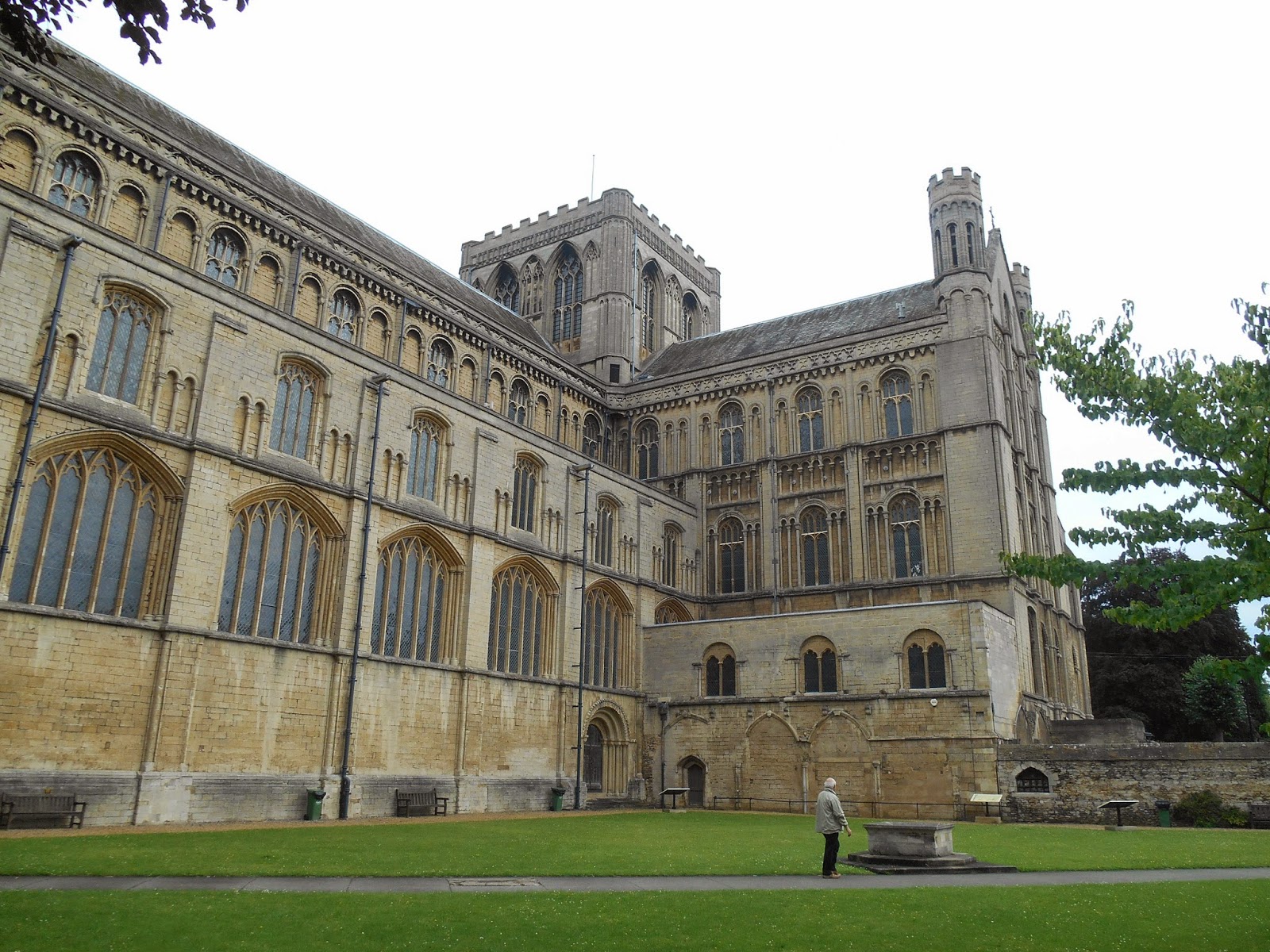 In time, the cloister was remodelled in a more modern style, with glass windows. It was finally completed in 1525, not long before the Dissolution. During the Commonwealth period, the cloister, chapter house and library were demolished, the stone and timber sold for use elsewhere. What you see here is all that remains. 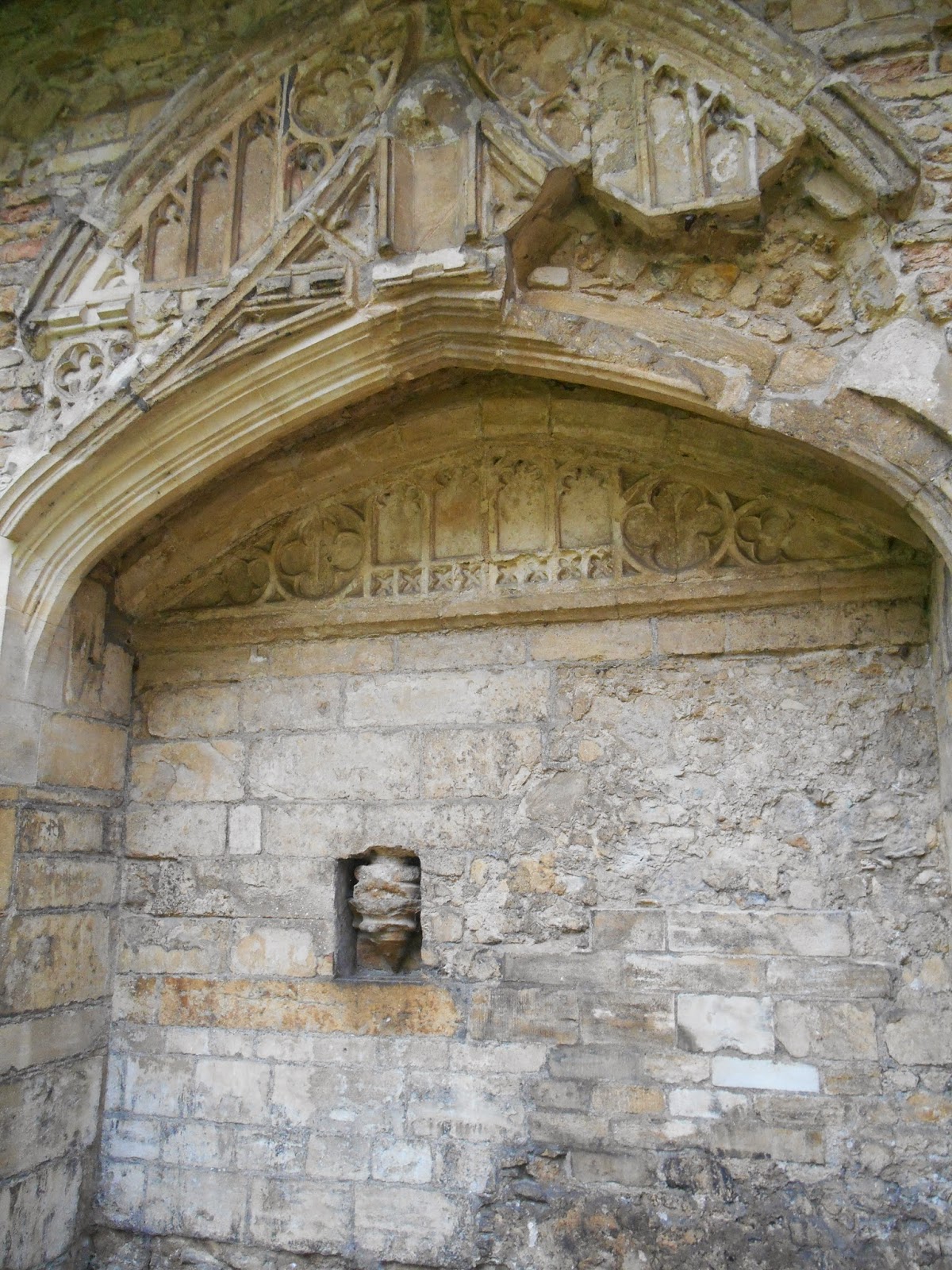 However, we still need to find our two sad queens.

The first queen is a Royal Consort, Queen Katherine, who lies in the North Aisle beneath her standards, thousands of miles away from her home in Aragon. Her family emblem, a pomegranate, lies on her tomb. 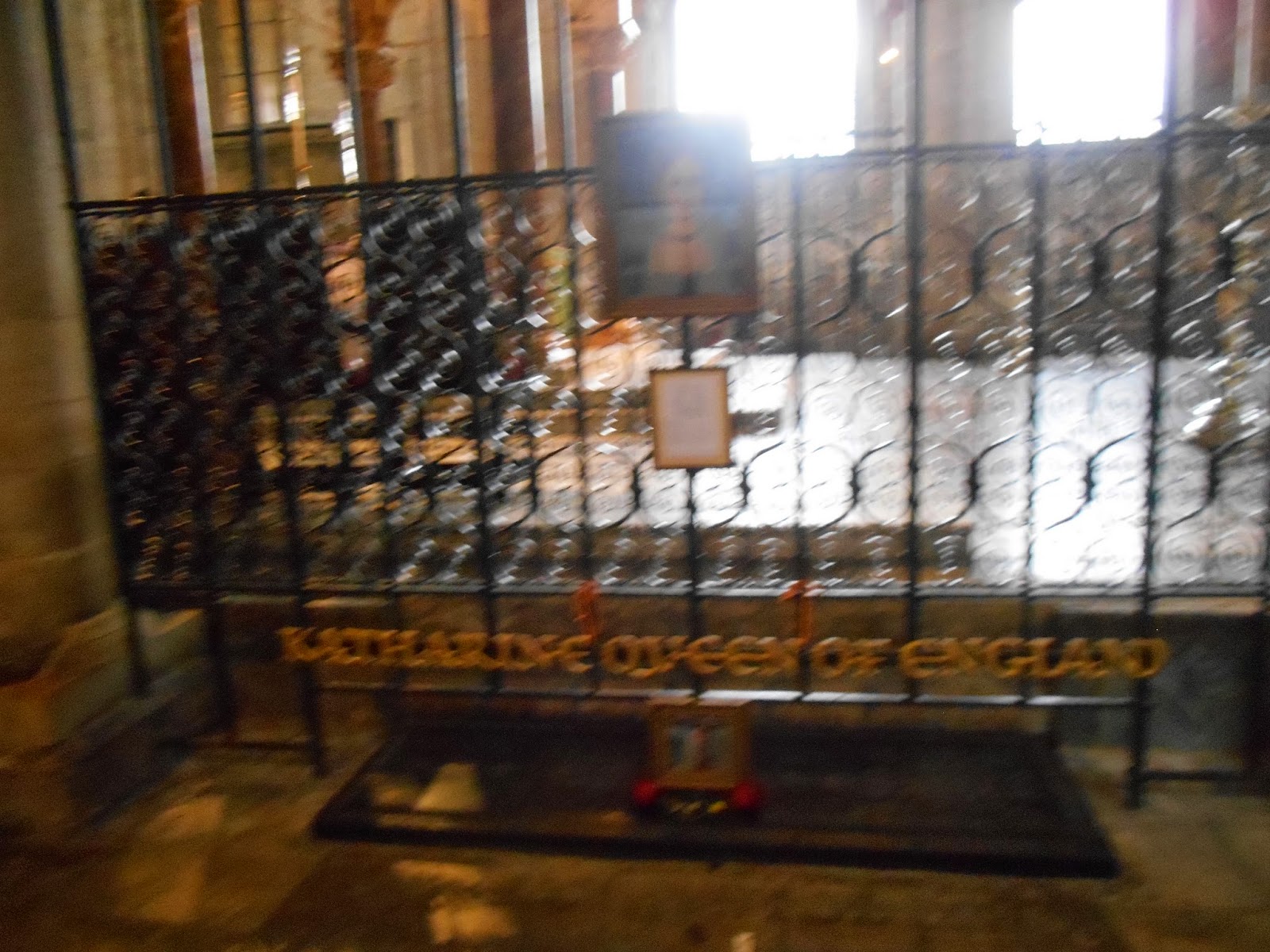 Katherine was married to King Henry VIII for 20 years, bore him a daughter and became his trusted right hand woman. In between seven pregnancies, miscarriages, stillbirths and funeral services for her newborn children, Queen Katherine visited the destitute, built a school for girls, established Christ Church College, Cambridge and founded the Royal College of Physicians. She brought lace making to her adopted land and introduced variety into her subjects' diets by showing them how to grow fruits and salads.

Henry trusted Katherine to substitute for him when he was away. In 1513, while her husband was away in France, she helped to plan and execute the Battle of Flodden in which the great Scottish King James IV was killed. In 1520, she accompanied Henry to the Field of the Cloth of Gold, a European summit meeting. 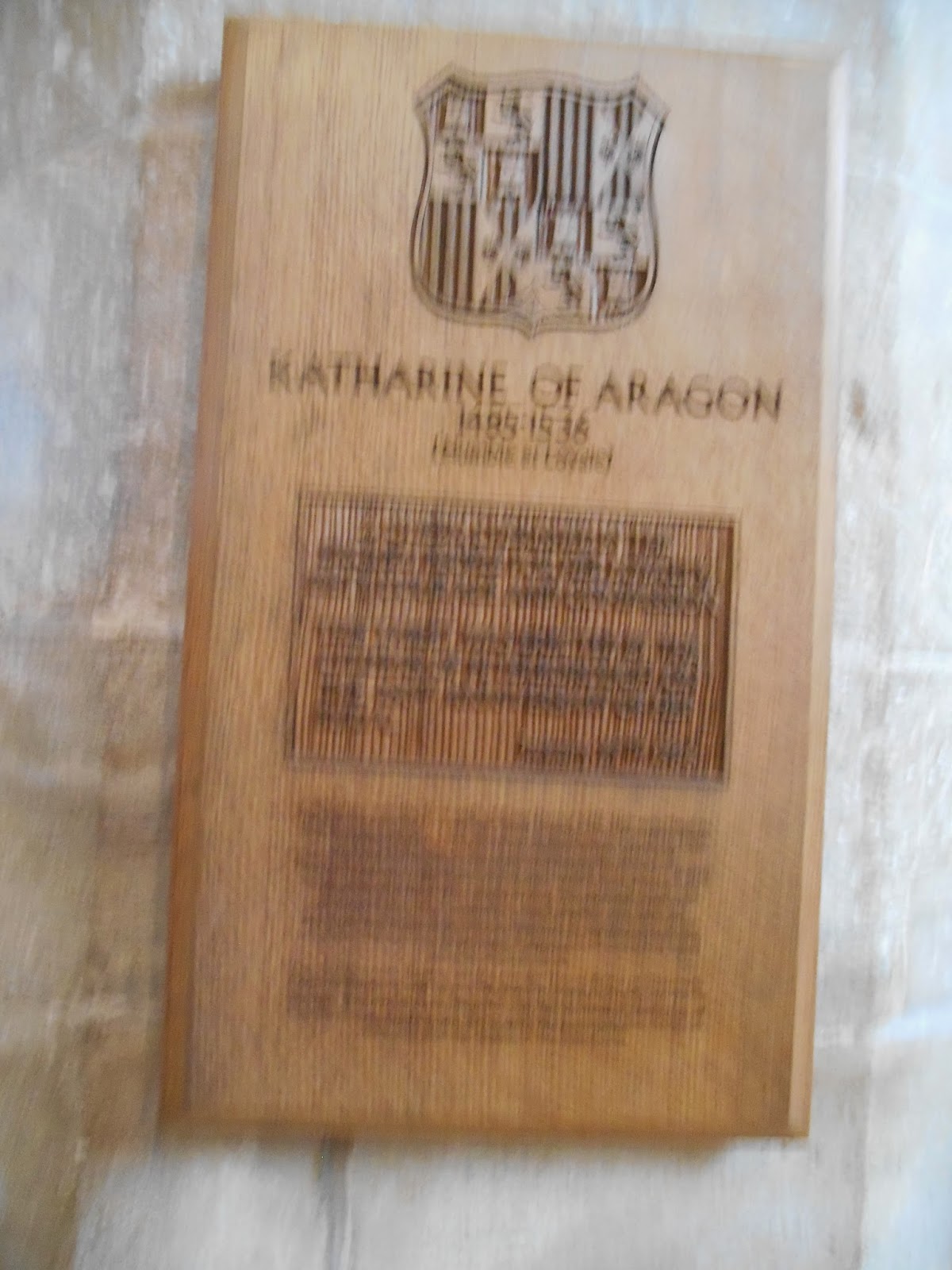 However, not even these formidable achievements were enough for an able woman in the sixteenth century. Katherine failed in the one thing which mattered: producing a male heir for Henry. Set aside for Anne Boleyn (see the post on Hever Castle), Katherine lived in seclusion, eventually moving to Kimbolton in eastern England. where she died in 1536.

Henry decided that a state funeral at St Paul's was too expensive. Instead, she was buried here in Peterborough Abbey, but, humiliatingly, not as the Queen, consort to the King, but as Princess Dowager, the widow of Prince Arthur, Henry's older brother to whom she was originally affianced before his premature death. Not only did Henry not attend her funeral, but he would not allow her daughter Mary to do so either.

Who knows what effect such emotional cruelty and public humiliation of Katherine's daughter Mary, later Mary Tudor, had on her psyche. They may, however, explain some of her own behaviour towards Henry's other daughter, her half-sister Elizabeth.

And, in due course, Elizabeth signed the death warrant of our other sad Queen, Mary Queen of Scots, buried opposite Katherine, in the South Aisle. 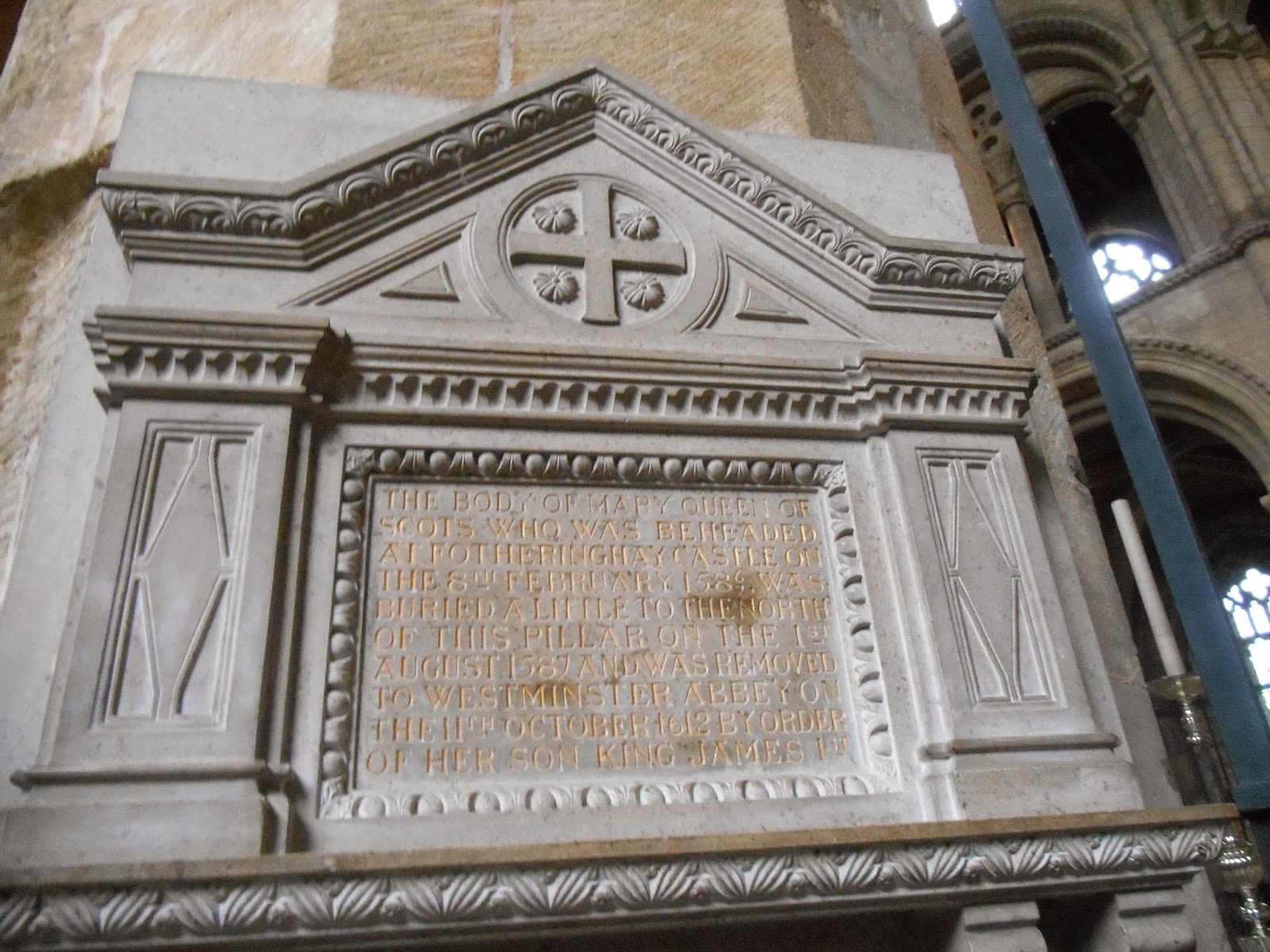 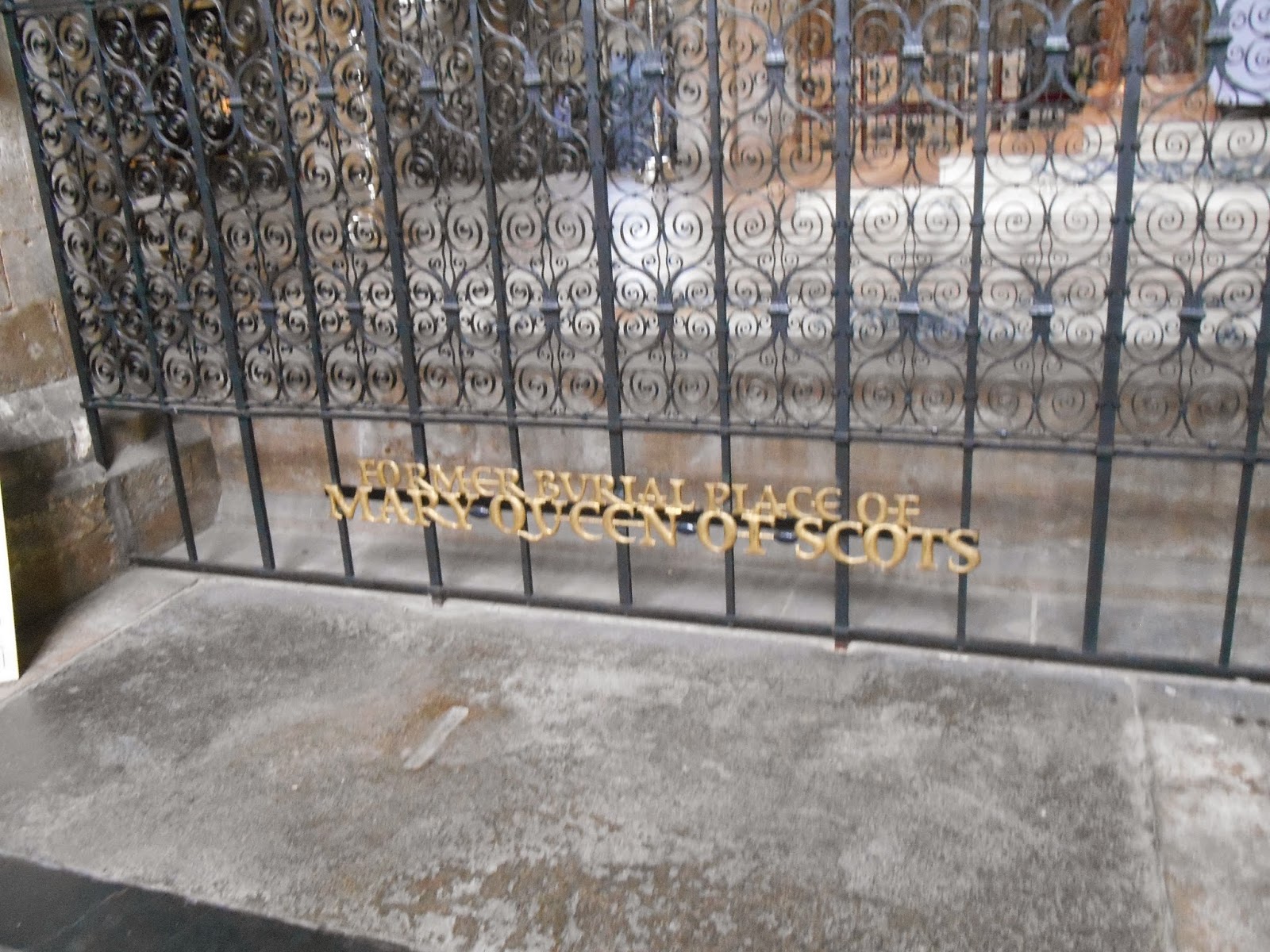 Mary had fled to England for safety after her own Scottish subjects imprisoned her on an island in Loch Leven. (See the post Following Mary Queen of Scots to Craigmillar Castle.) Queen Elizabeth had held her Catholic cousin Mary under lock and key for the best part of 20 years. She put up with various plots involving Mary which aimed to place her on the English throne to which she had a claim. Mary ended up imprisoned in Fotheringhay Castle, not far from Peterborough. Here, the Babington plot became the final straw. Having executed the other accomplices, Elizabeth dithered over Mary's fate, eventually and reluctantly signing her death warrant in 1587. It is difficult to know what else she could have done.

Following the execution, Mary's body was embalmed. Six months later, when people were thinking of other things, it was quietly buried here in Peterborough.

After her death, Mary did not stay long in Peterborough Cathedral, for in 1612 her son, James VI of Scotland and I of England arranged for her body to be removed to Westminster Abbey. However, the memorial to her remains, a little bit of England that flies the Scottish flag.


The  Cathedral Close looks peaceful now, but across this space once passed the funeral corteges of two sad queens, one Spanish and one Scottish.

Feeling a bit sad ourselves, we made our way back to the A1M and took the road to Scotland.

Posted by Elisabeth Ritchie at 23:36