Blackness Castle: guarding the Firth of Forth

It could be a bit tough being a Scottish earl in the 1440s, or indeed, in any century. There you are living in your new castle at Blackness, built to replace your old one at Barnton (recently burnt down by the Black Douglas), when before you know it the King takes a fancy to to your splendid new residence. You might belong to one of the most powerful families in Scotland, the Crichtons, but if the King wanted what you had got, then you really didn't have much of a chance. 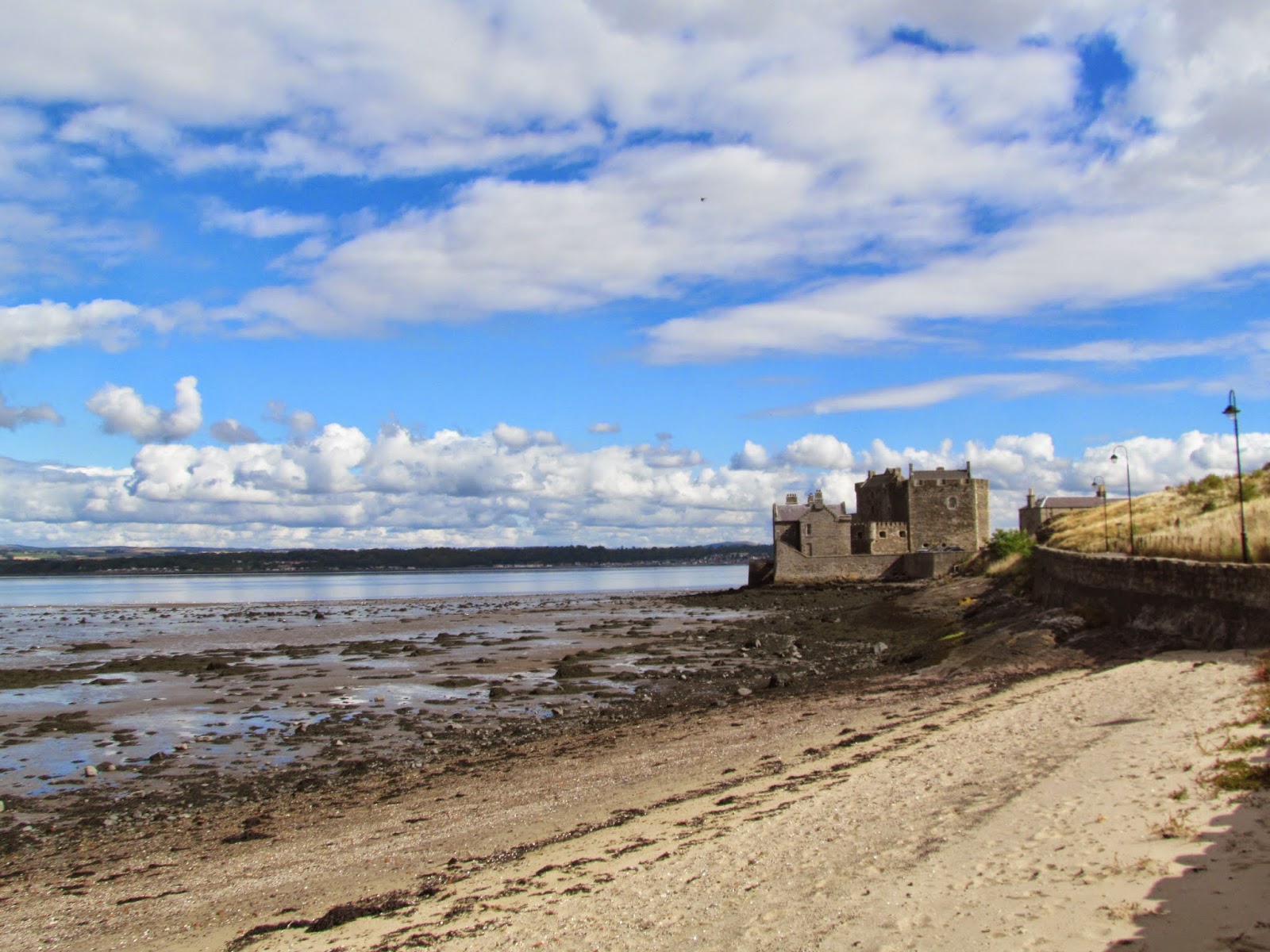 It wasn't surprising that James II had his eyes on Blackness. The castle was superbly situated on the Firth of Forth, just to the north of Edinburgh. A few miles to the west, lay the royal palace of Linlithgow; a few miles to the east was the sea. The word 'ness' is the clue. It means 'promontory'.


The best way for the King to get hold of the castle was to force its sick owner, George Crichton, Earl of Caithness and Admiral of Scotland, to leave it to him in his will: in fact not just the castle but everything George owned. Despite the best efforts of James, George's son and heir, to hang on to Blackness Castle, he eventually gave in. Two weeks of bombardment by the King's forces were pretty persuasive. The Castle remains Crown property to this day. 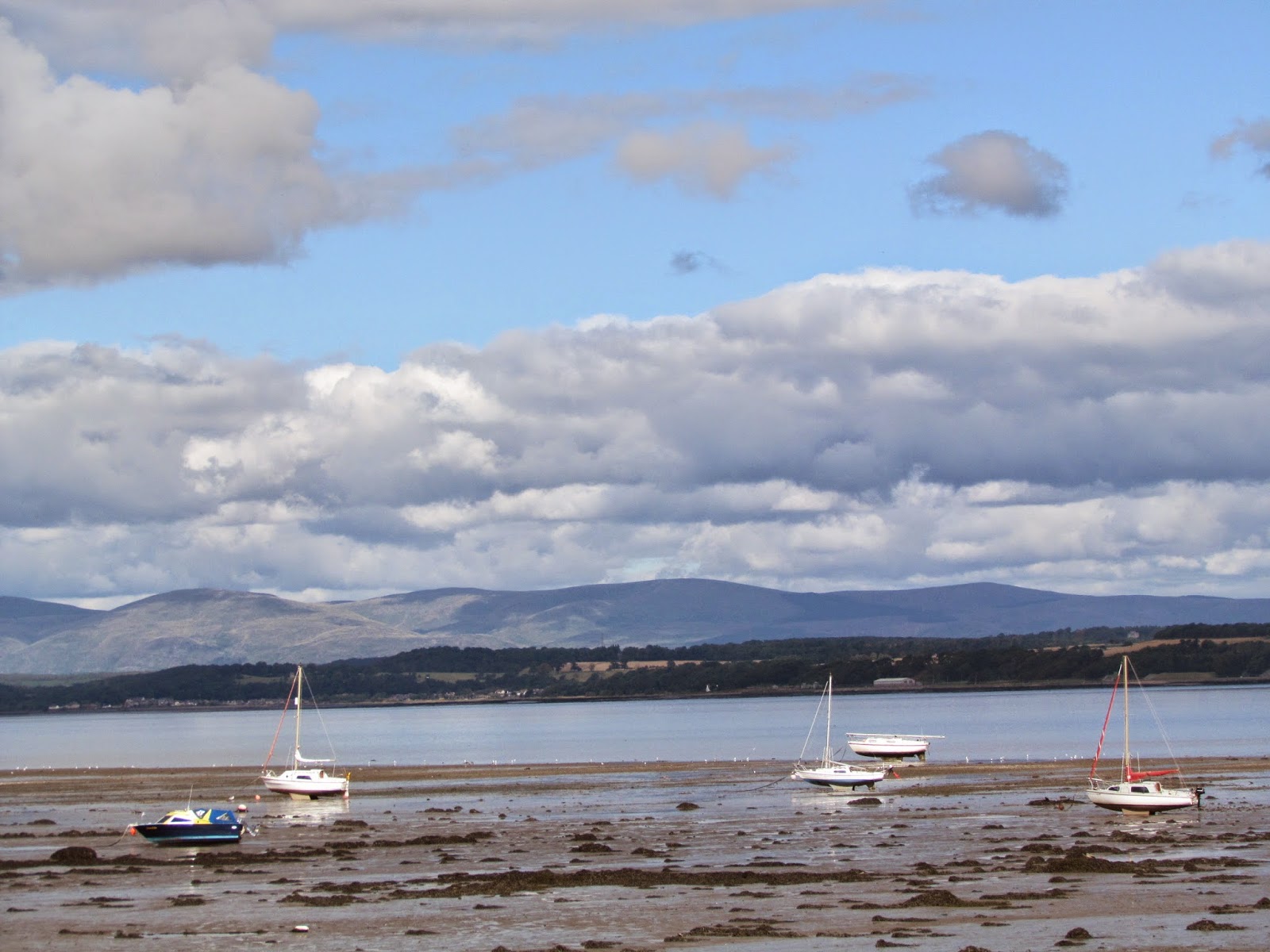 Today, the Firth looks quite peaceful, withthe hills of Fife hovering across the water. Even then, in a rather less stable political context than today, Blackness was not a bad place to live. Indeed, its Keepers generally found it quite a lucrative position. There was money to be made from fishing and salt-panning as well as the castle's own brewery and even its rabbit warrens. You must be ready to entertain the monarch at short notice; however, that rarely happened. The king no doubt had more comfortable residences to visit. 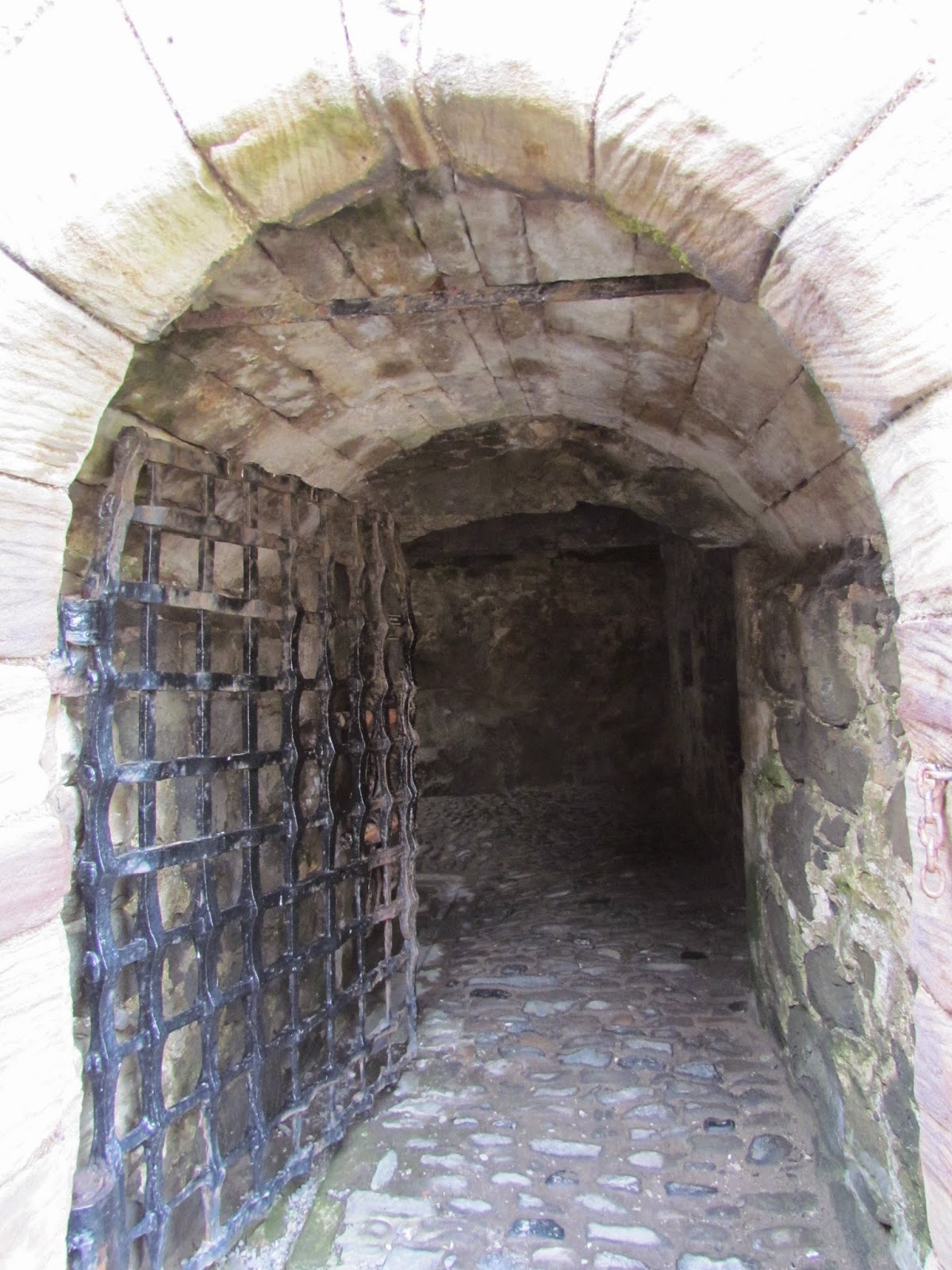 A dark tunnel, built during the reign of Mary Queen of Scots, about a century after the castle was first built, leads the modern visitor through to the main courtyard. Here you are faced with two tall towers.

The great central Tower House was the original castle building. It soon also became a prison, where several aristocratic and famous Scots were incarcerated, for example, Cardinal Beaton, an implacable opponent of Protestantism in the sixteenth century. Its grim heights make escape appear virtually impossible. Pity the poorer prisoners, however, who were consigned to the damp and freezing dungeons, unlike the rich who lived in relative comfort in the upper rooms. 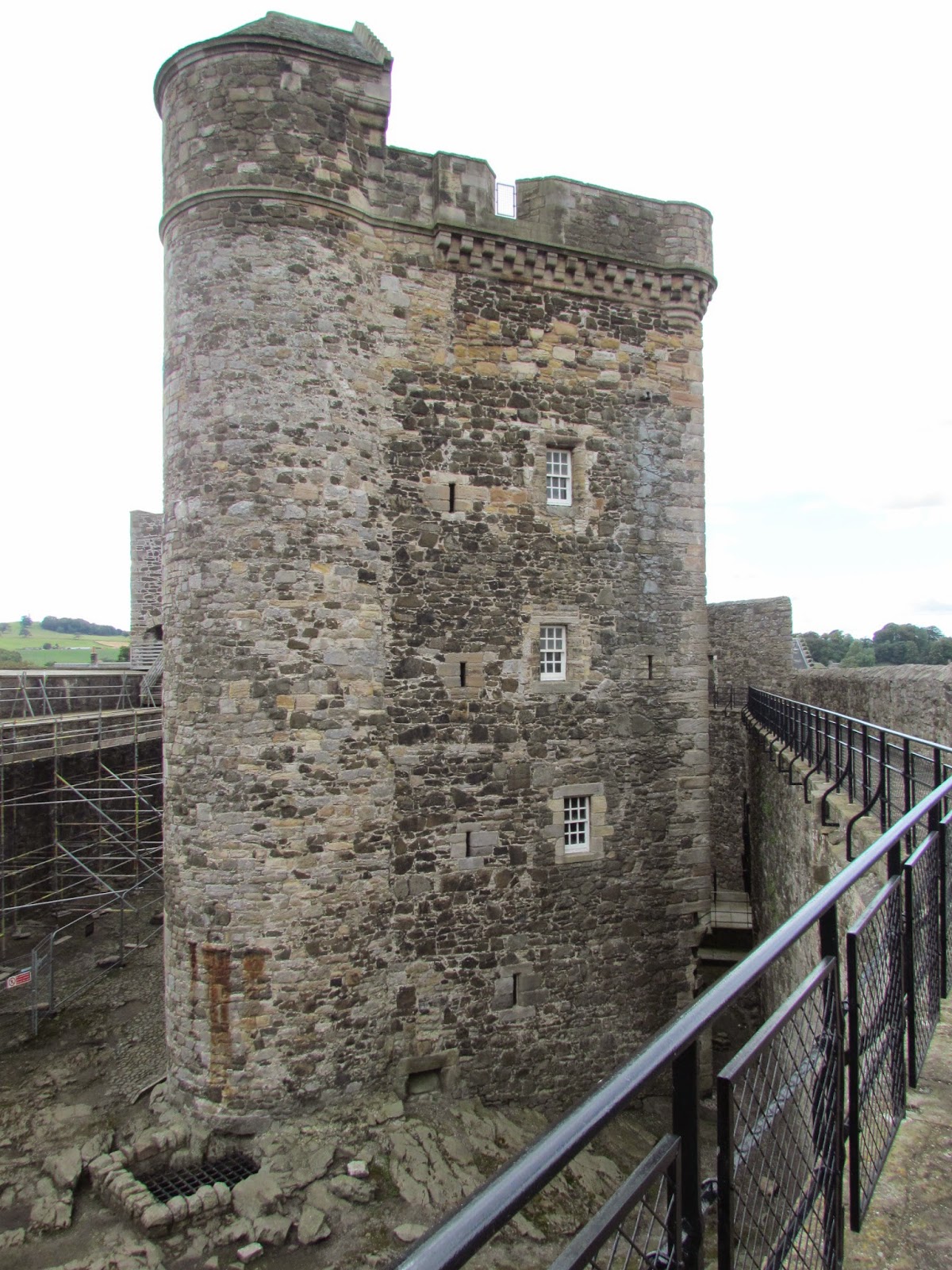 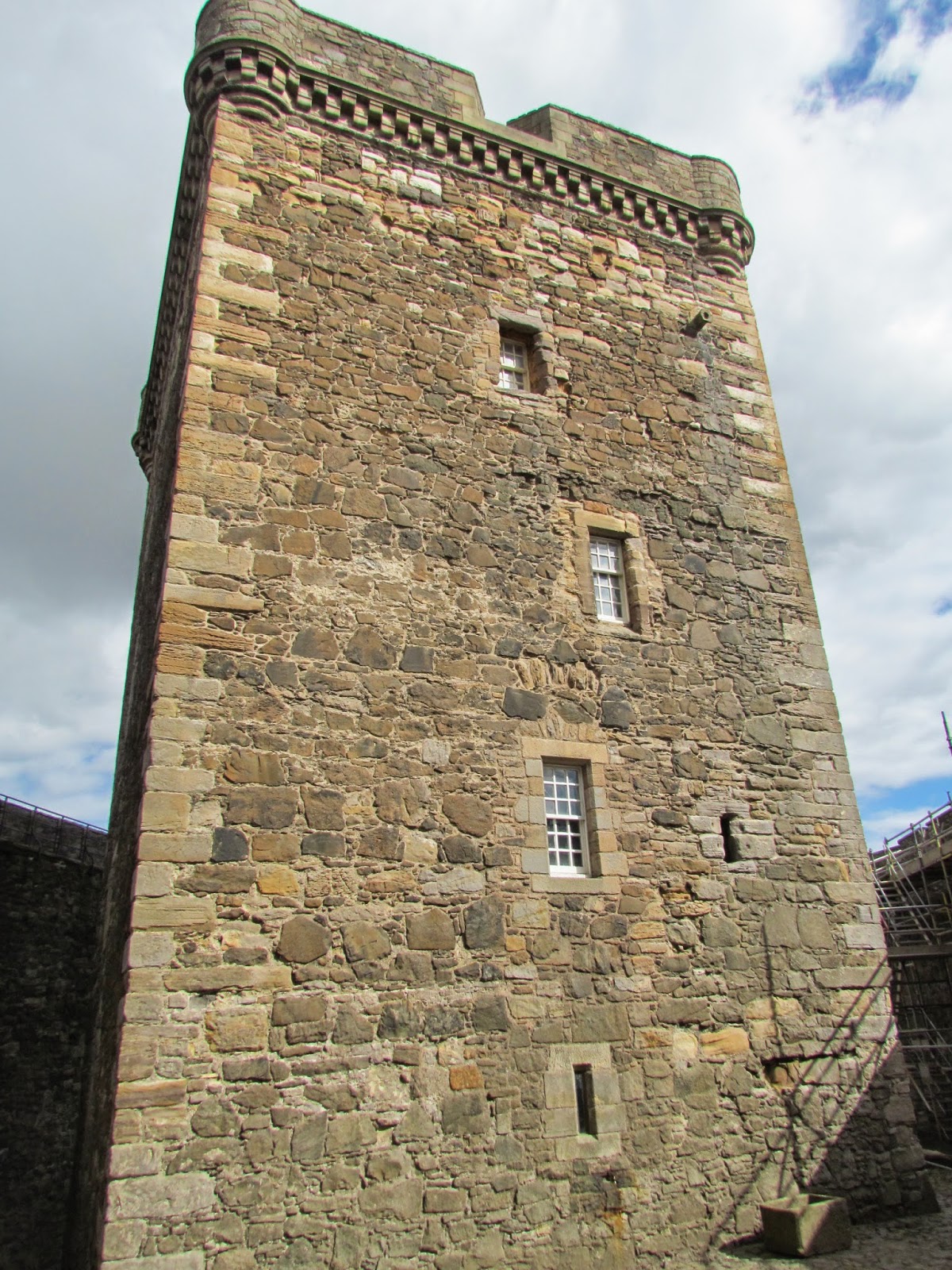 The castle was built to withstand a siege. Its small windows and arrow slits give it a formidable appearance. The walls are so thick that the stairs have been built within their thickness. The basement was probably used for storage. Its magnificent vaulted ceiling would have been piled high with foodstuffs and other necessities.


Further fortifications were added during the century after it was first built, among the most innovative in Scotland. However, such work finished when James V died. 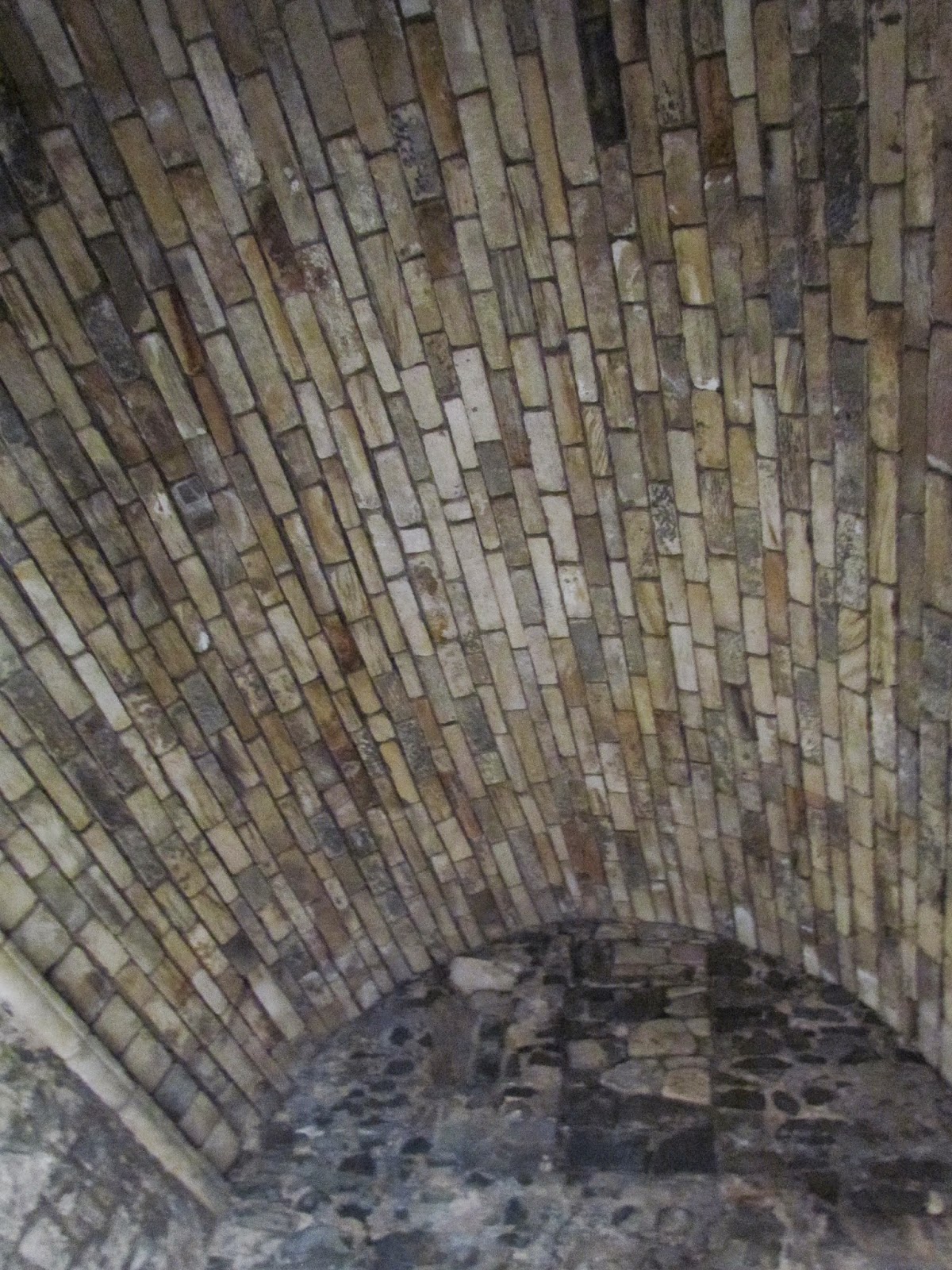 The castle certainly needed to be well prepared for conflict. Its Keeper was involved in the civil wars following the forced abdication of Mary Queen of Scots, though he later changed sides. He was not the only noble to do that, of course. The castle defended the Firth of Forth and made things extremely difficult for any ships attempting to skirt round it. 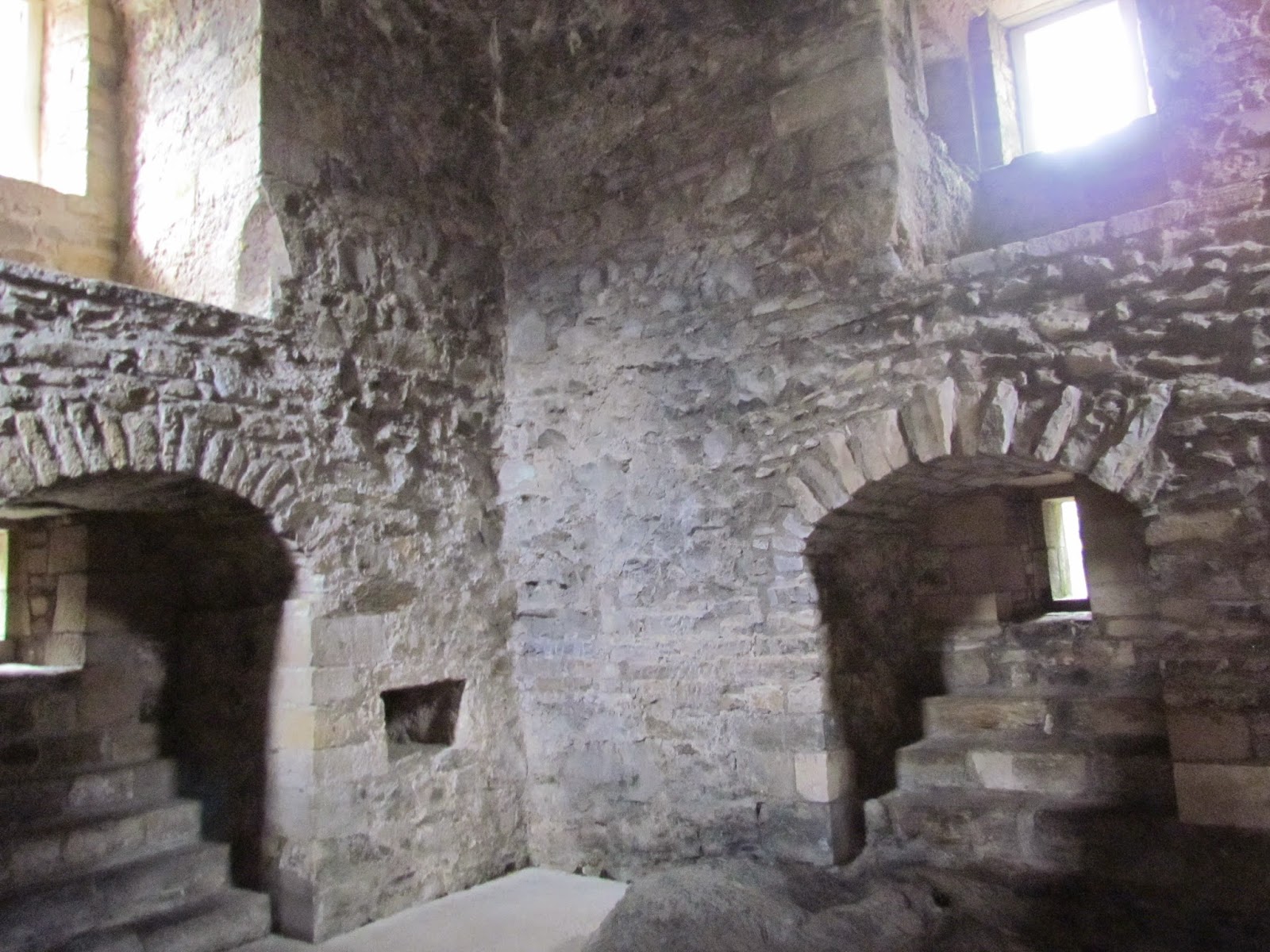 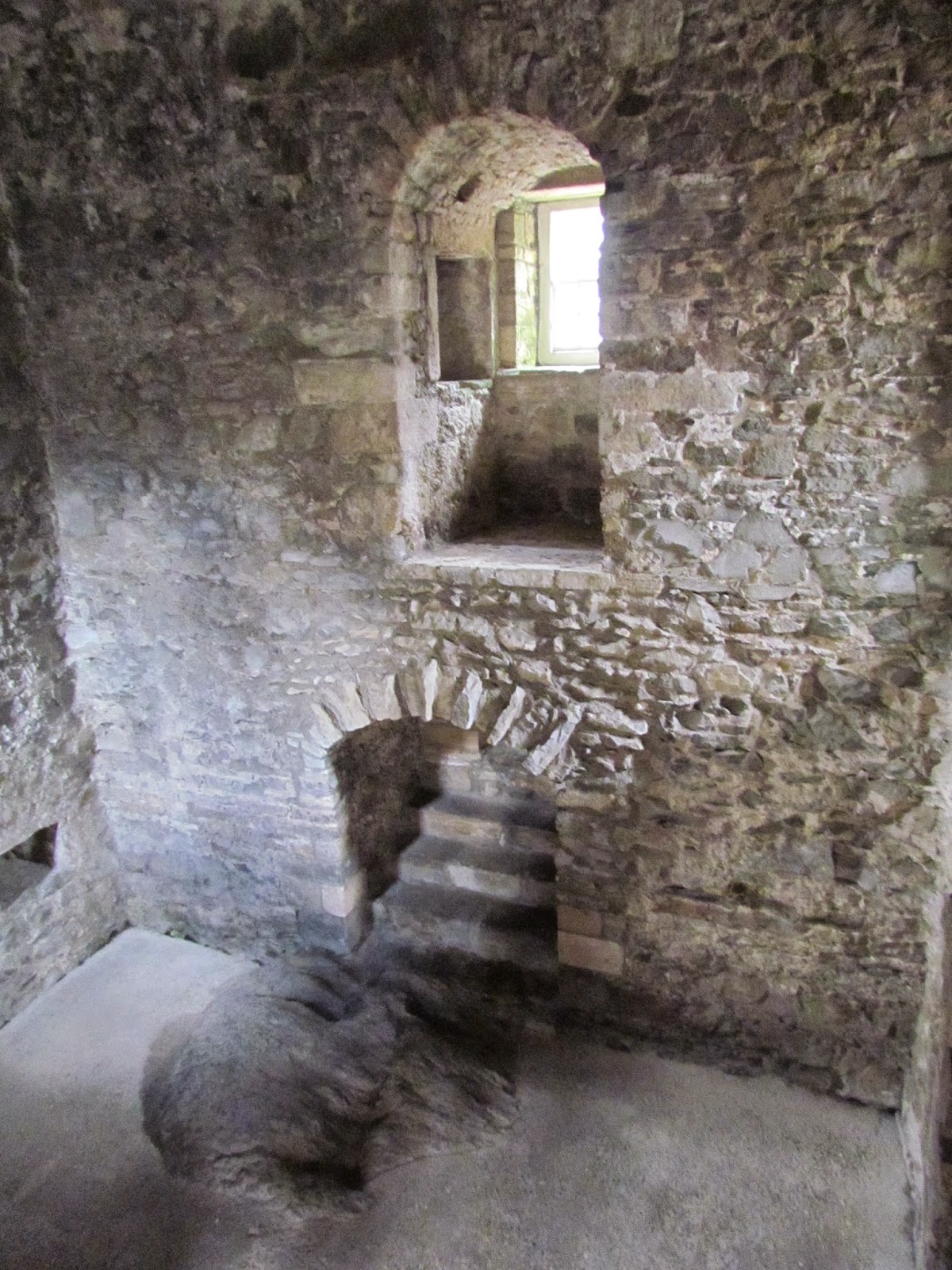 As elsewhere in the castle, the bedrock protrudes through the lower floors of the tower, not easy to walk on. Still, once you clamber to the top, you get a superb view of the Firth, and of any suspicious craft which happened to be sailing towards Linlithgow. Indeed, viewed from above, the castle itself looked like a ship, with the central tower as its main mast. 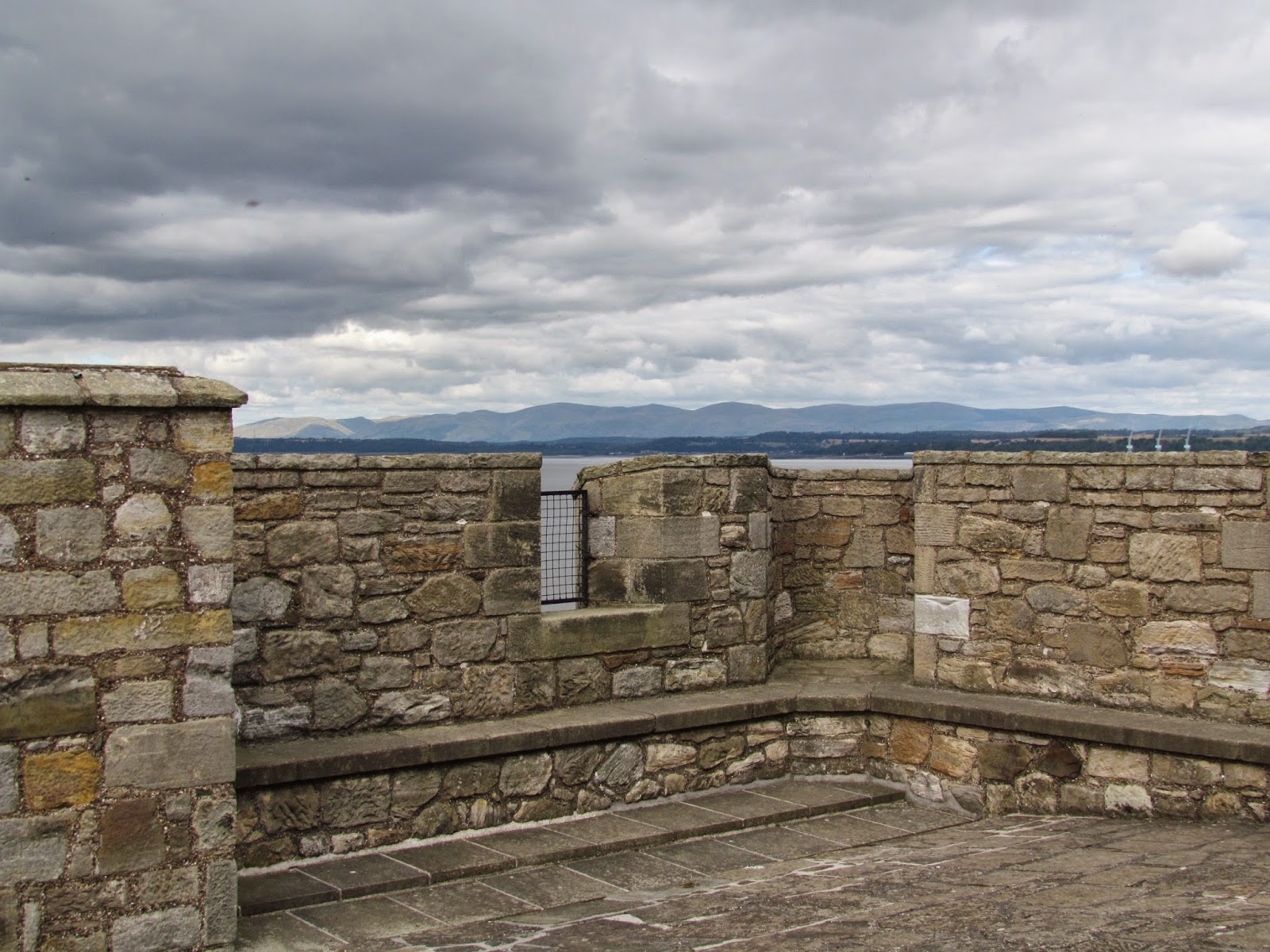 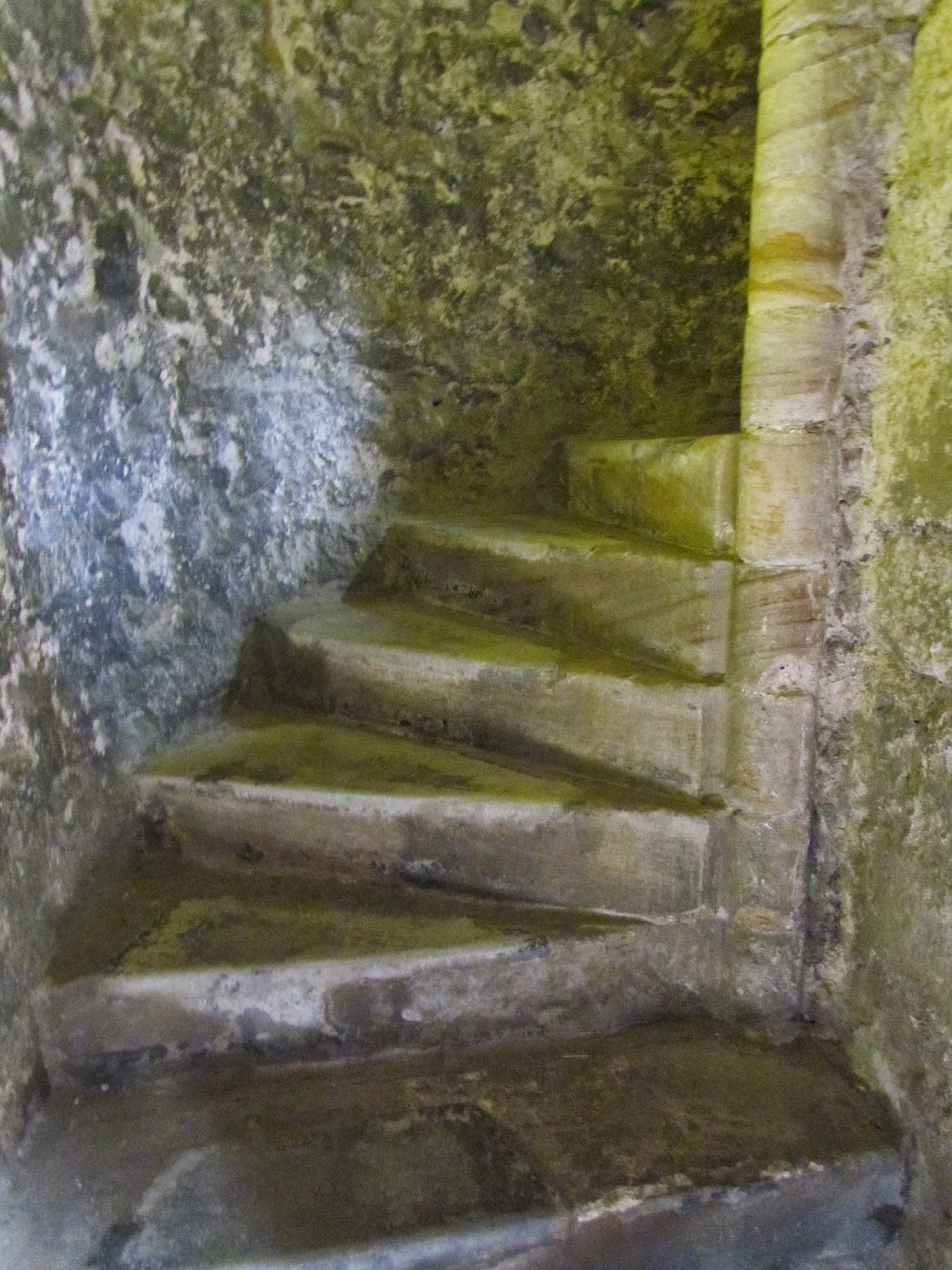 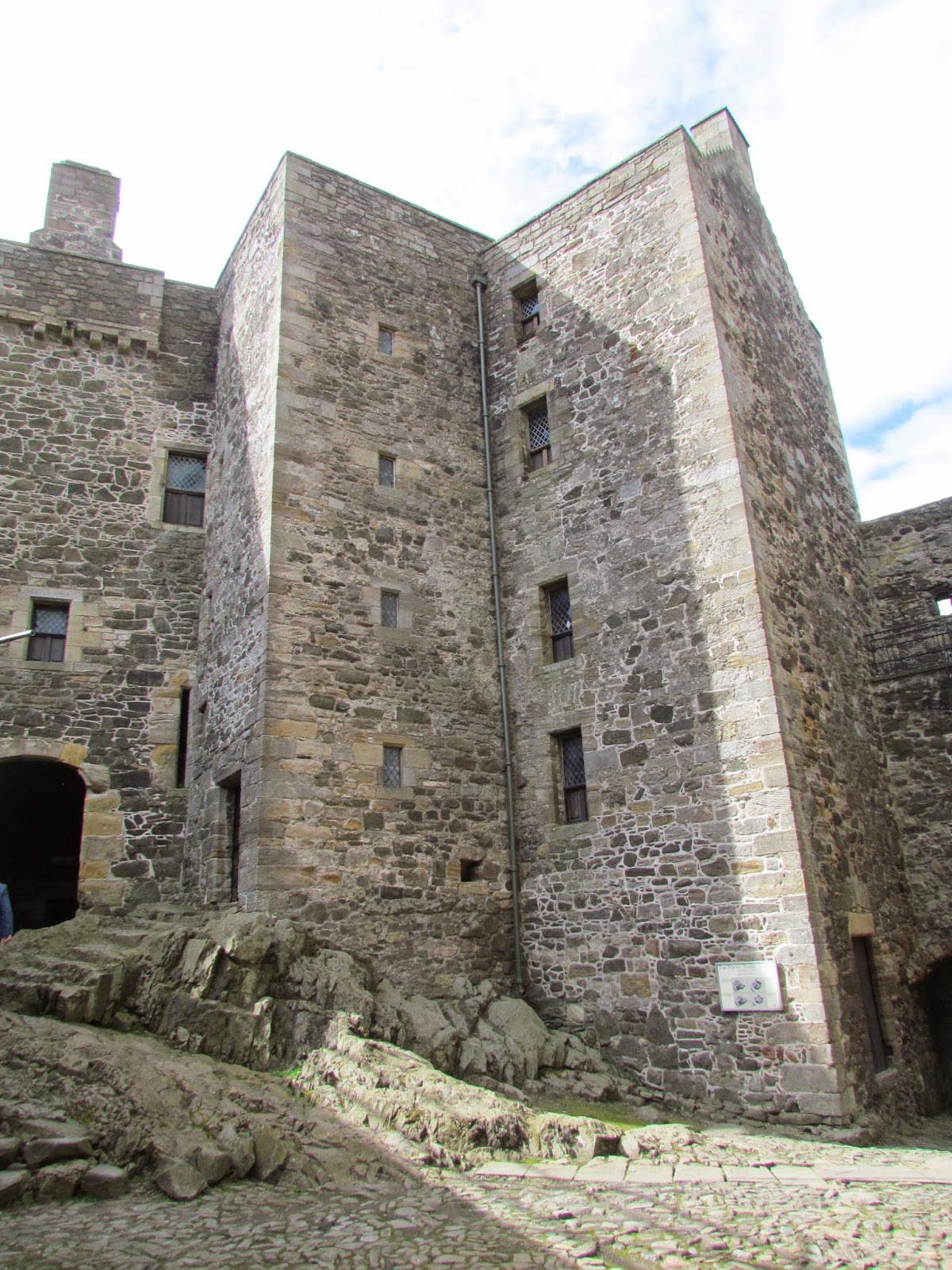 Complementing the central tower is the south or 'stern' tower, on the right of the entrance, a more 'modern' building which was probably where the Keeper lived. To enter the south tower you have to clamber up the rocks which still roughen the cobbles of the internal courtyard. 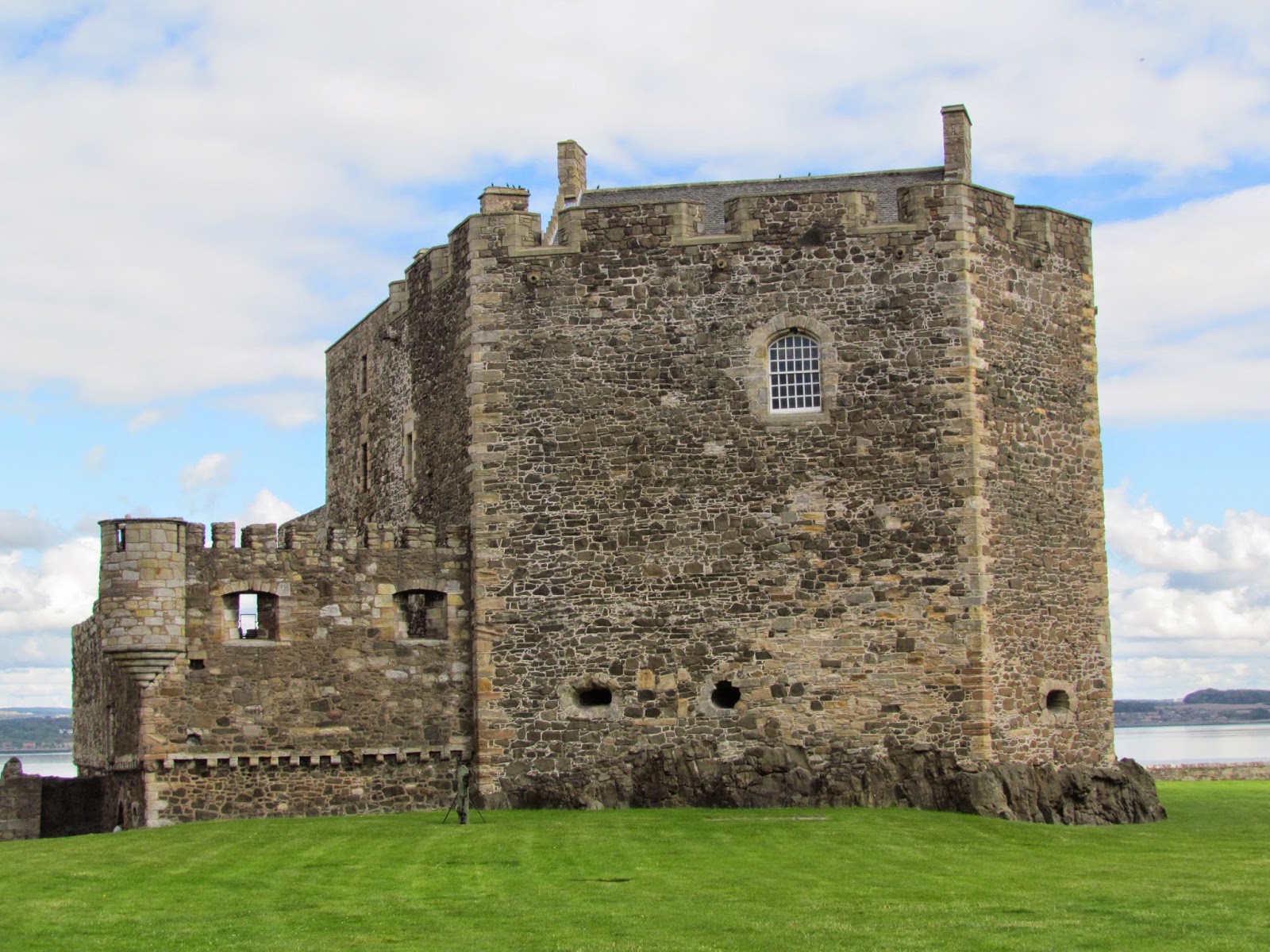 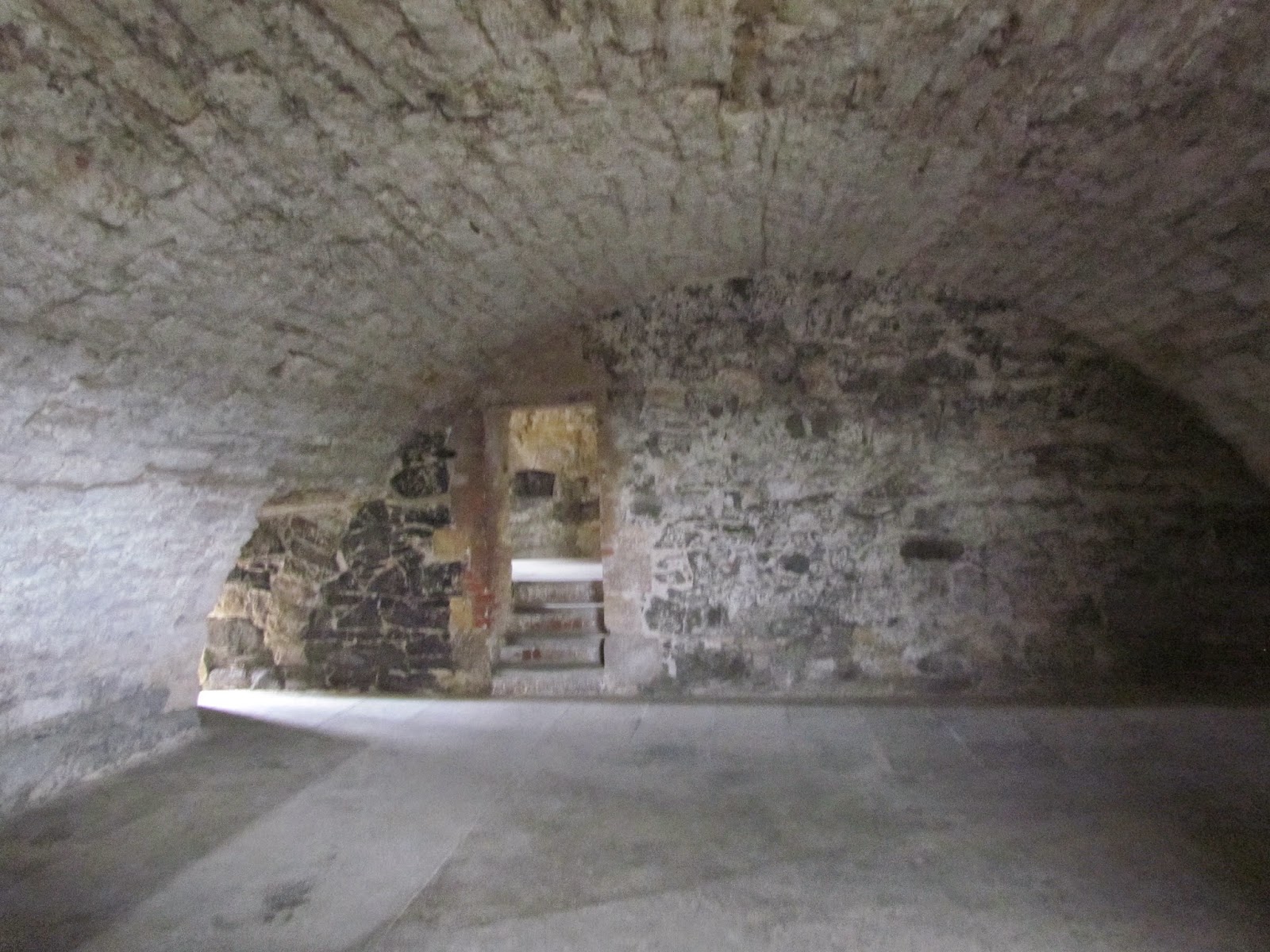 This building was rather more comfortable than the old tower house. On the ground floor was the guard room, again with an impressive vaulted roof. 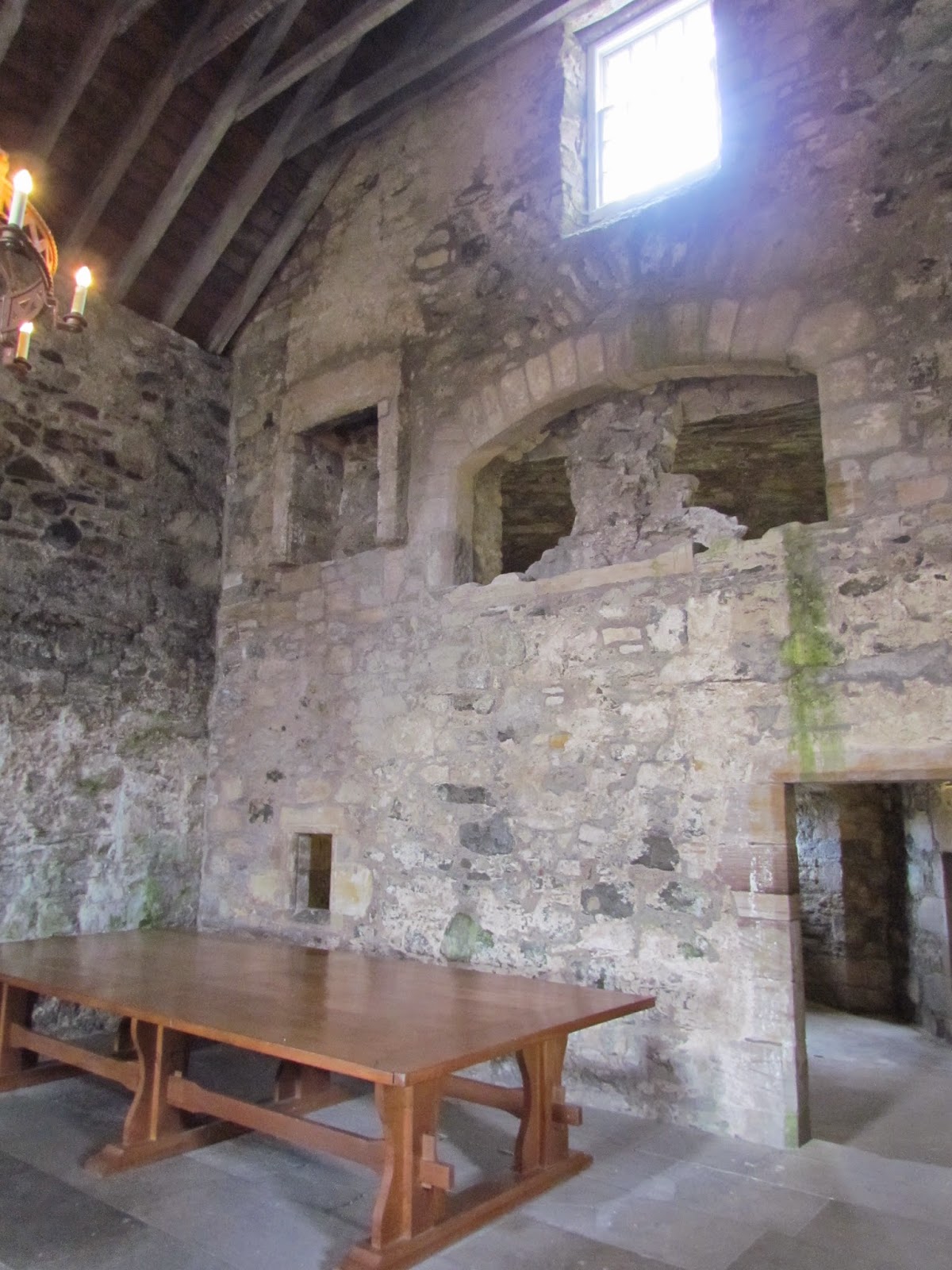 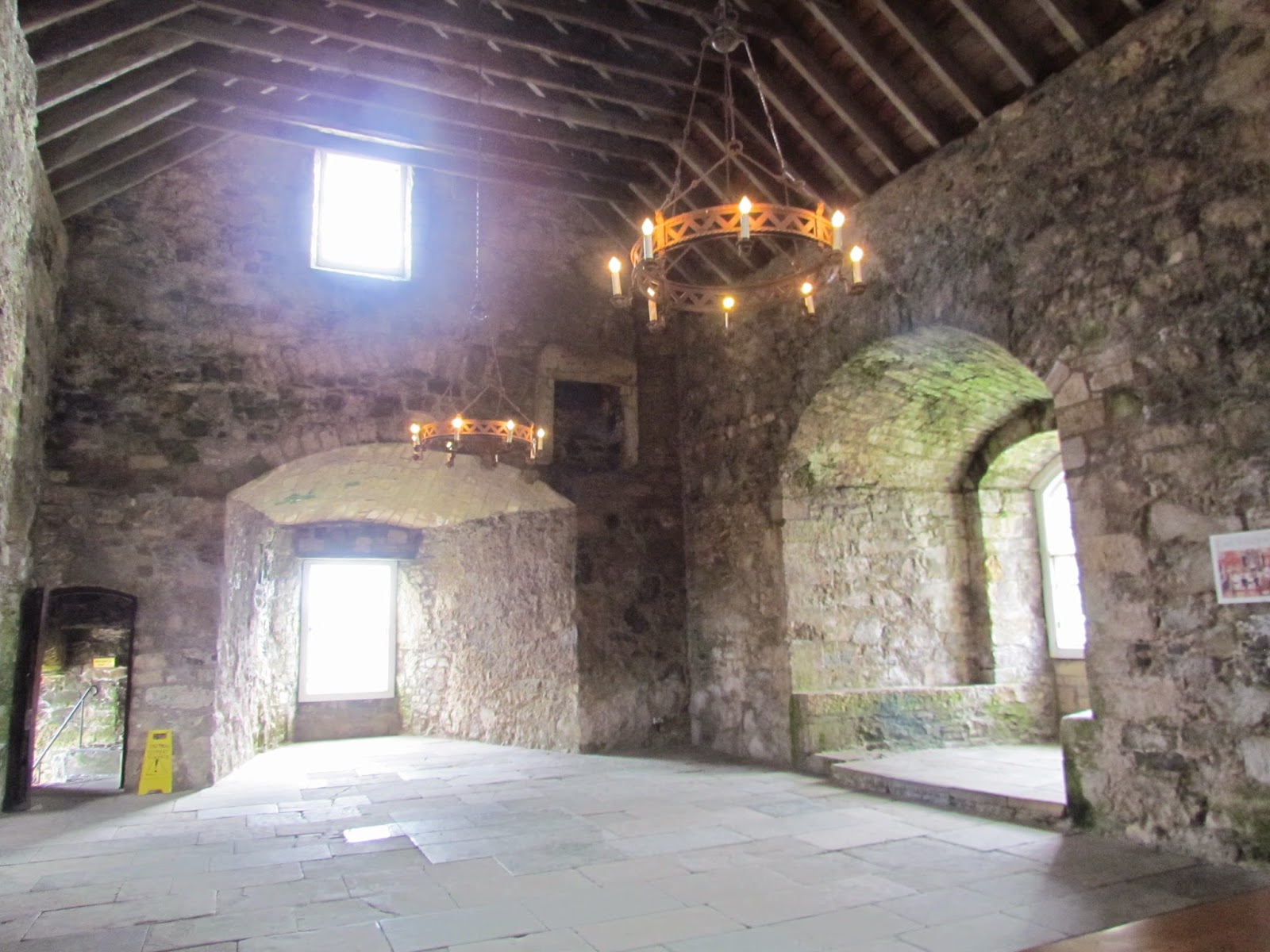 On the second floor was the great hall. Here the Keeper entertained James IV with feasting and music provided by musicians in the minstrels' gallery. Dishes would be passed through the serving hatches from next door,

In addition,there were several other rooms whose uses have been lost in time. 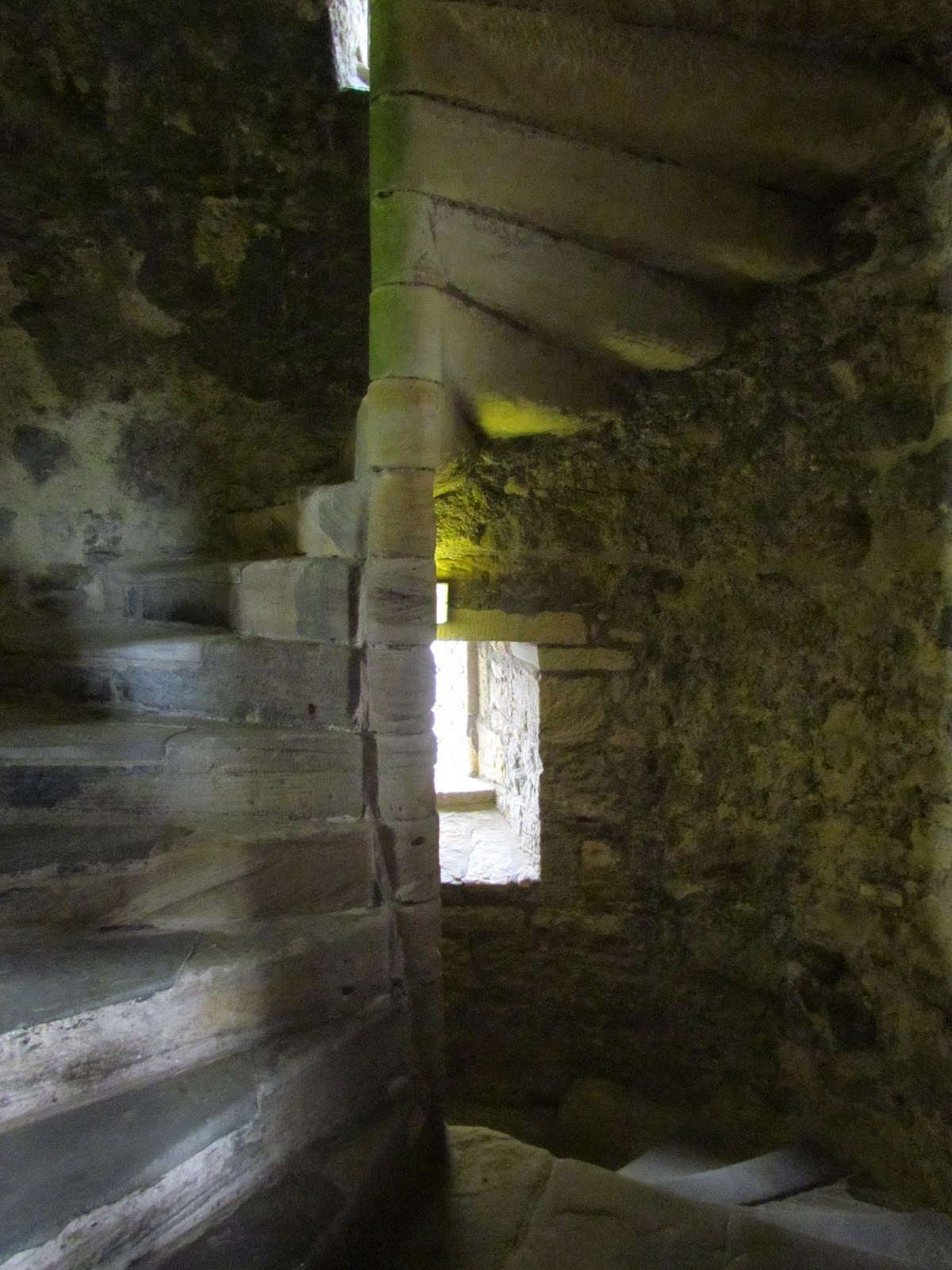 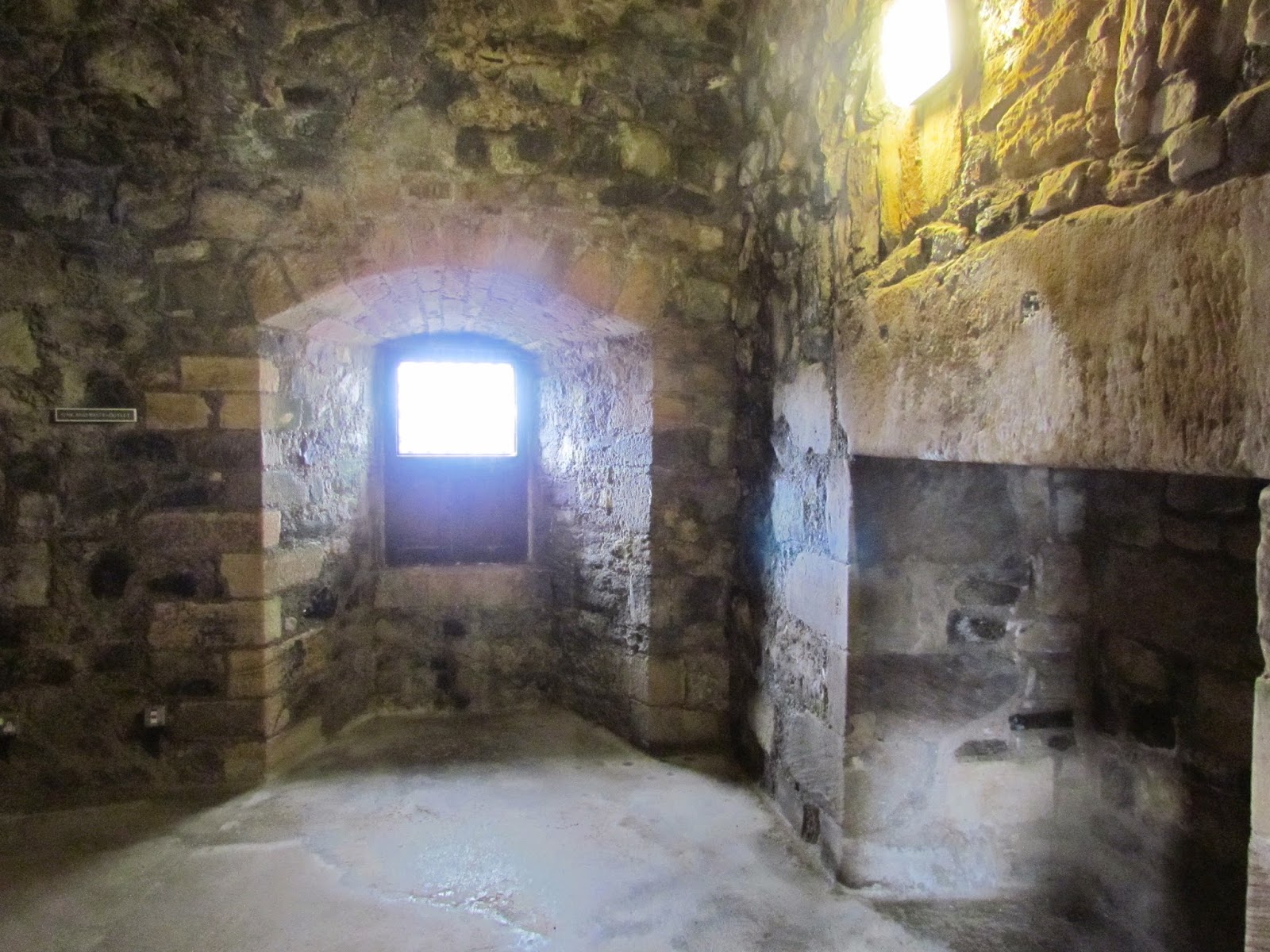 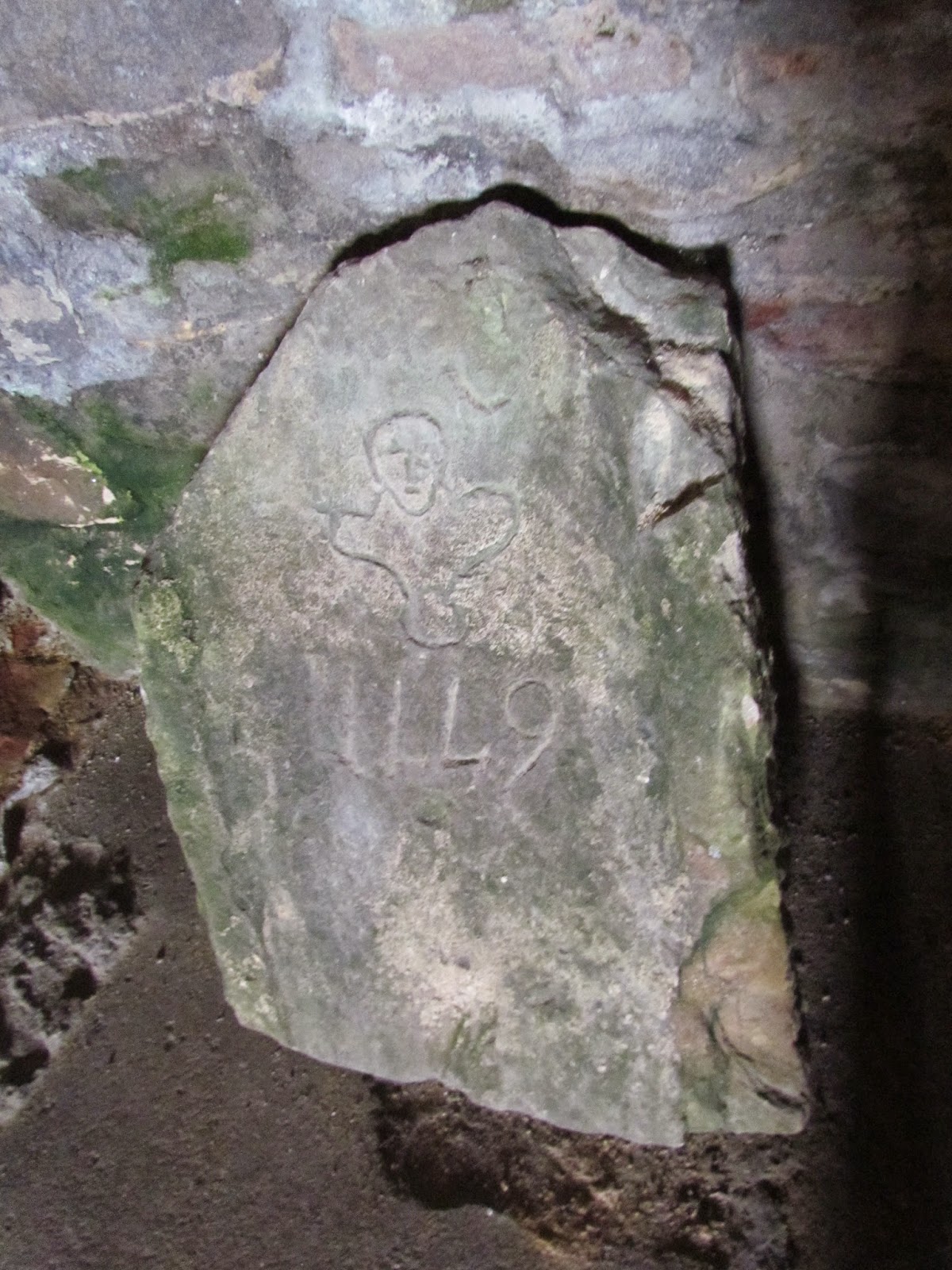 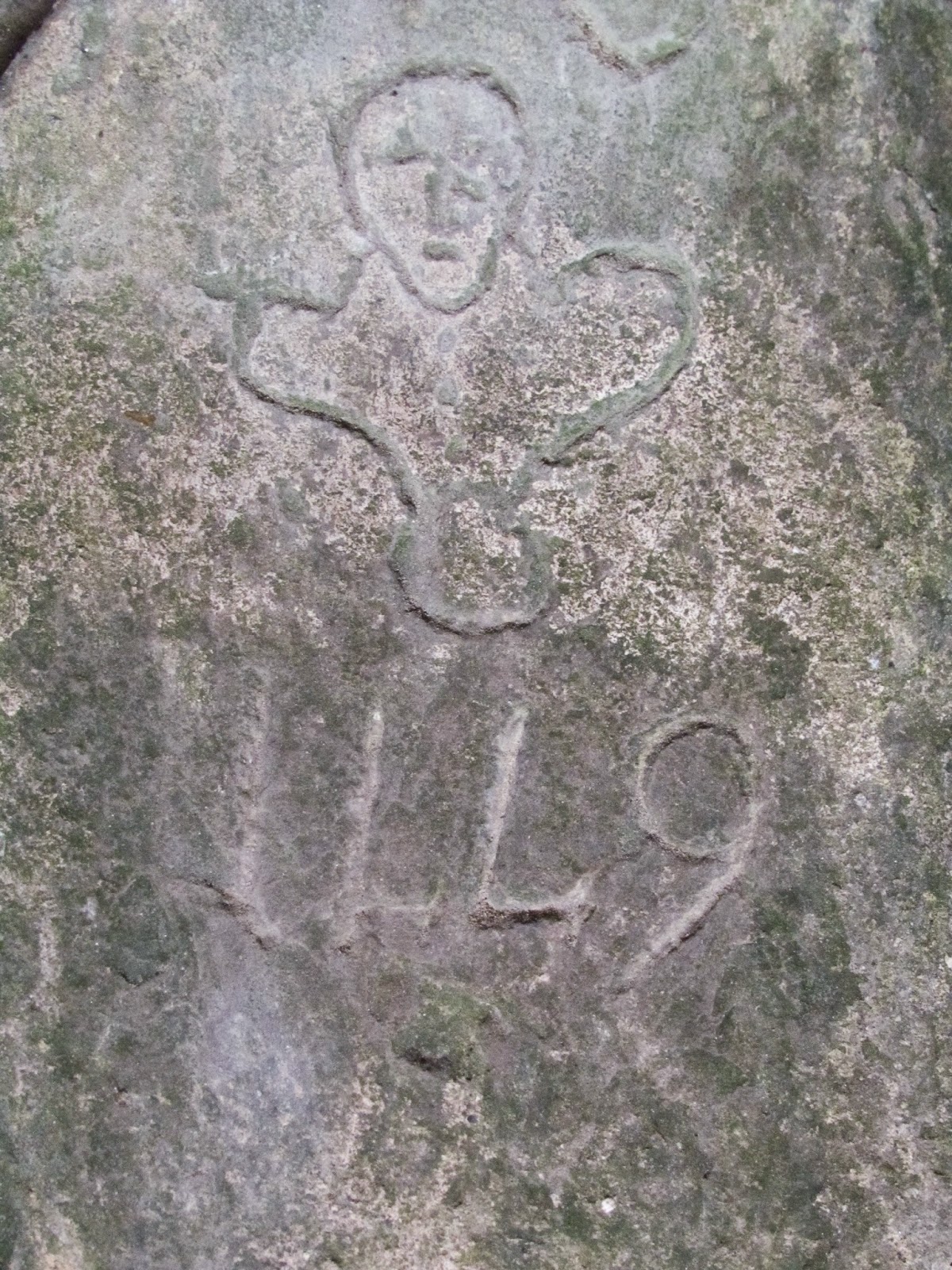 The furniture has long gone. Just a few remnants remain of the past, like this stone with its crudely carved inscription, 1449, probably dating back to the very earliest years of the castle. 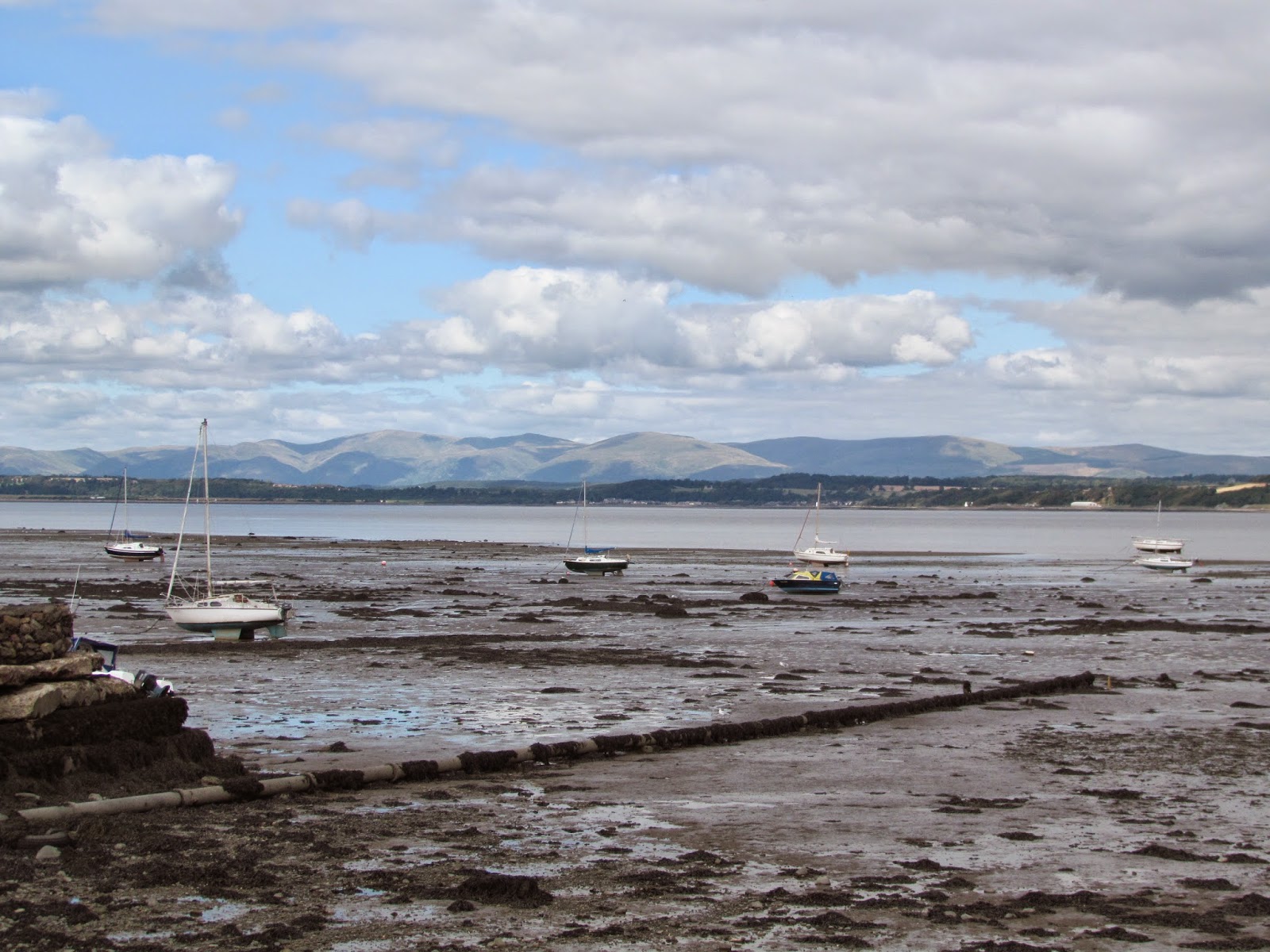 However, the most impressive views from and of Blackness Castle are from the top. You get a wonderful sense of its strategic importance. 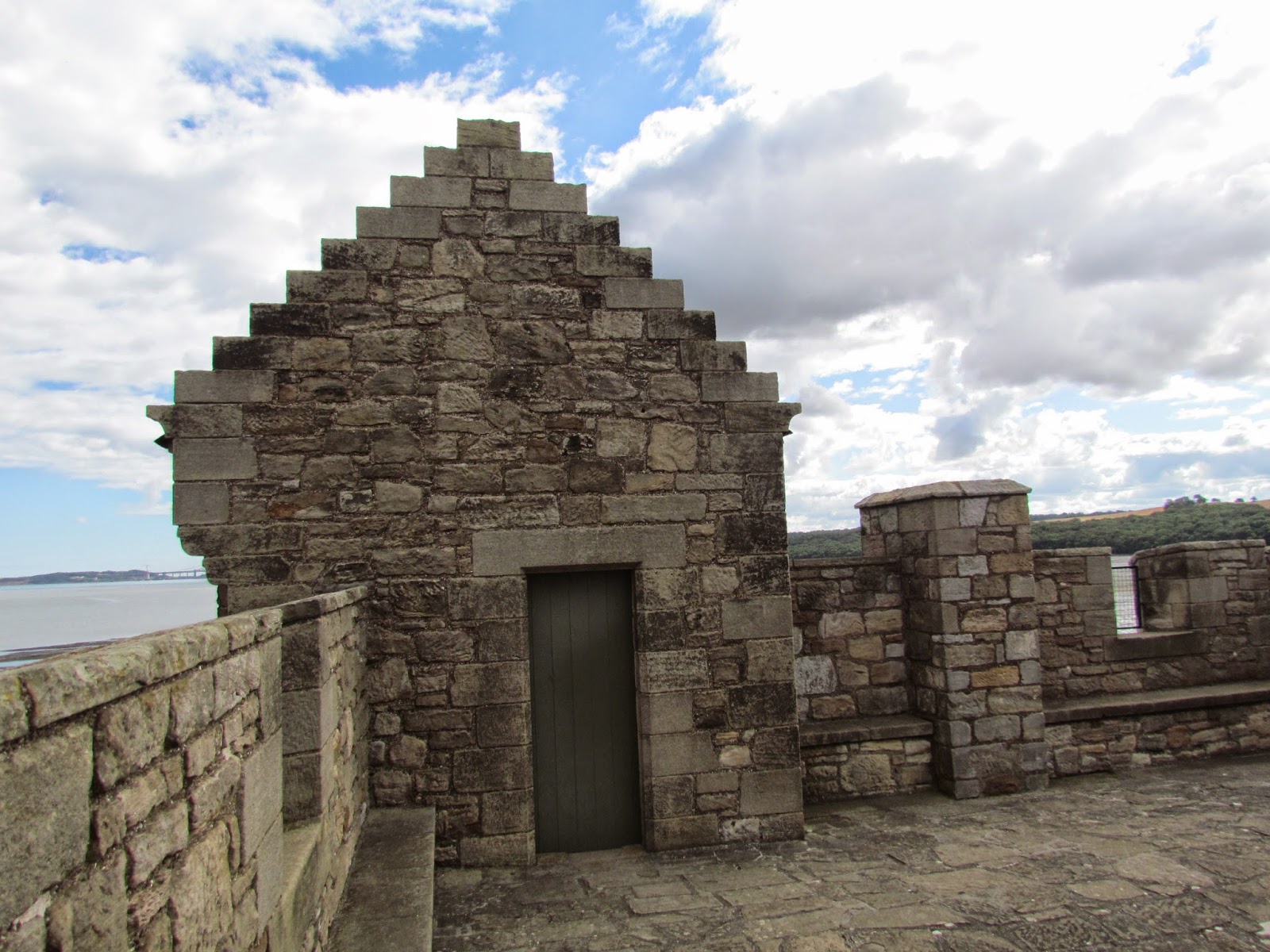 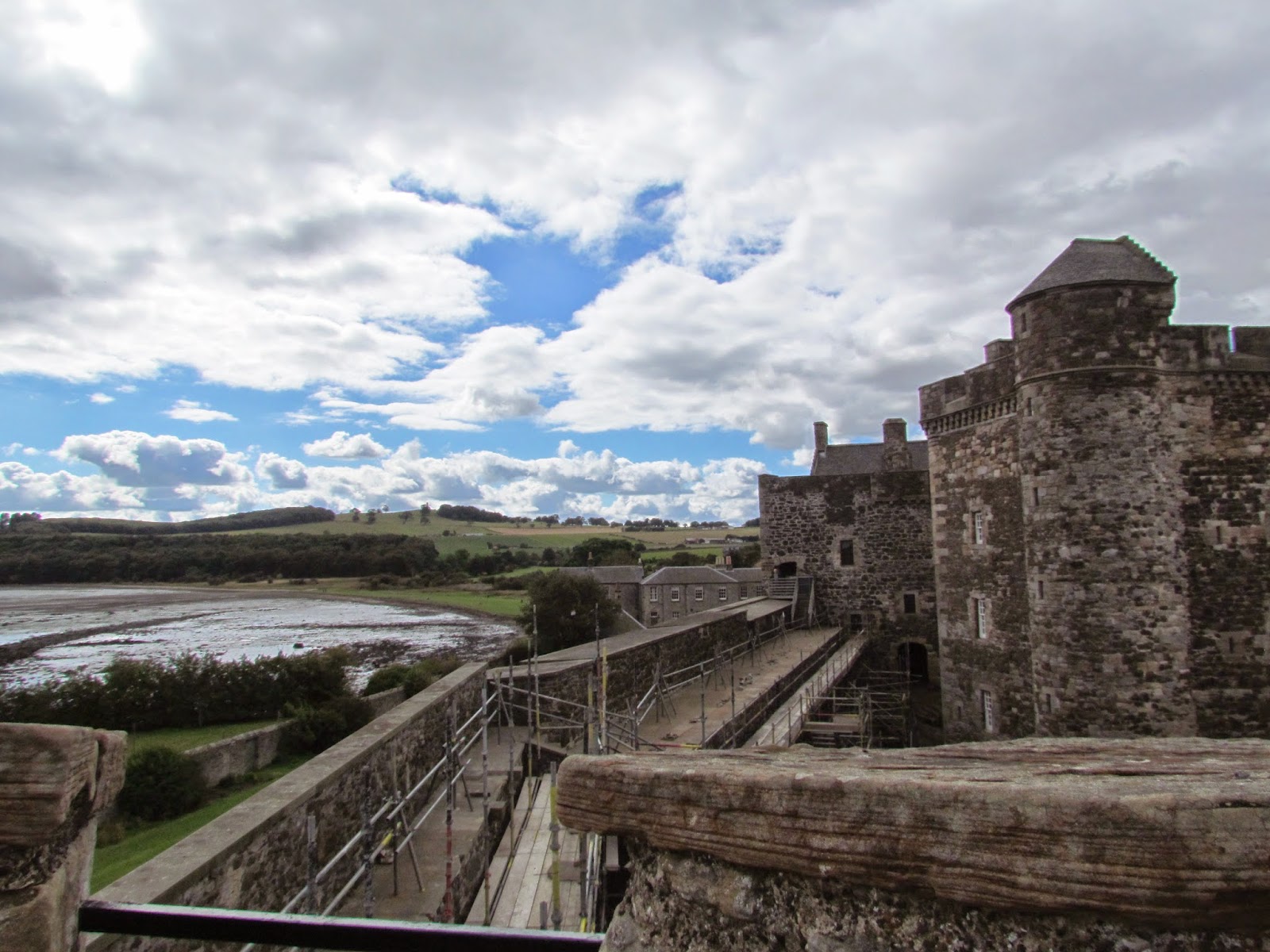 The last time the castle was involved in fighting was in 1650 when it was attacked by the forces of Oliver Cromwell. They didn't manage to take the castle, but they made enough of a mess of it for it to be abandoned shortly afterwards. Later it was restored again and became a prison for the Covenanters.

Once England and Scotland were joined through the Act of Union in 1707, the tower became a barracks for the British Army, one with few home comforts, I would imagine. It was also used for French prisoners during the Napoleonic Wars. 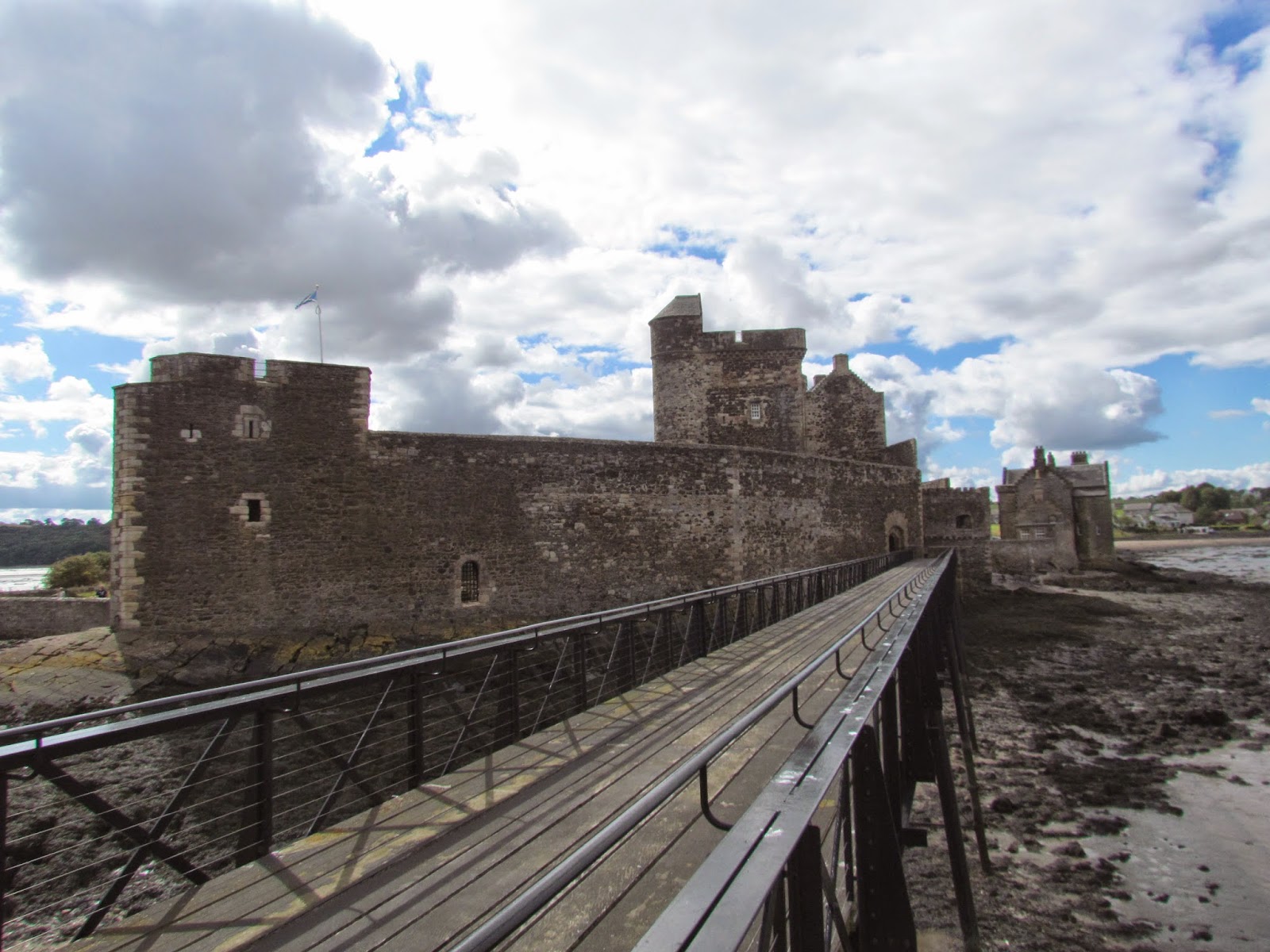 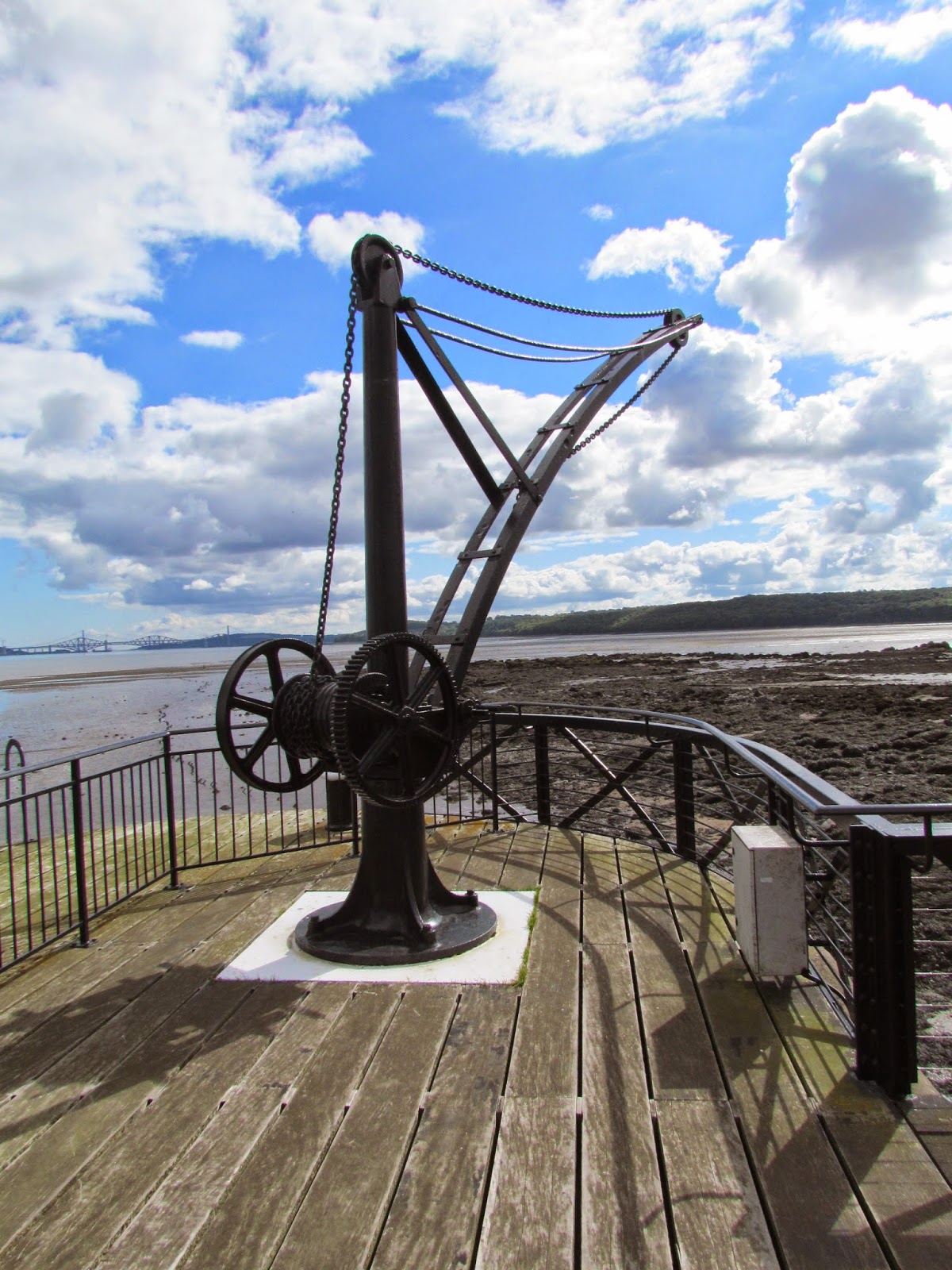 In the 1860s and 70s, Blackness became the main ammunition depot for Scotland. A pier was built from which explosives and weaponry could be uploaded. 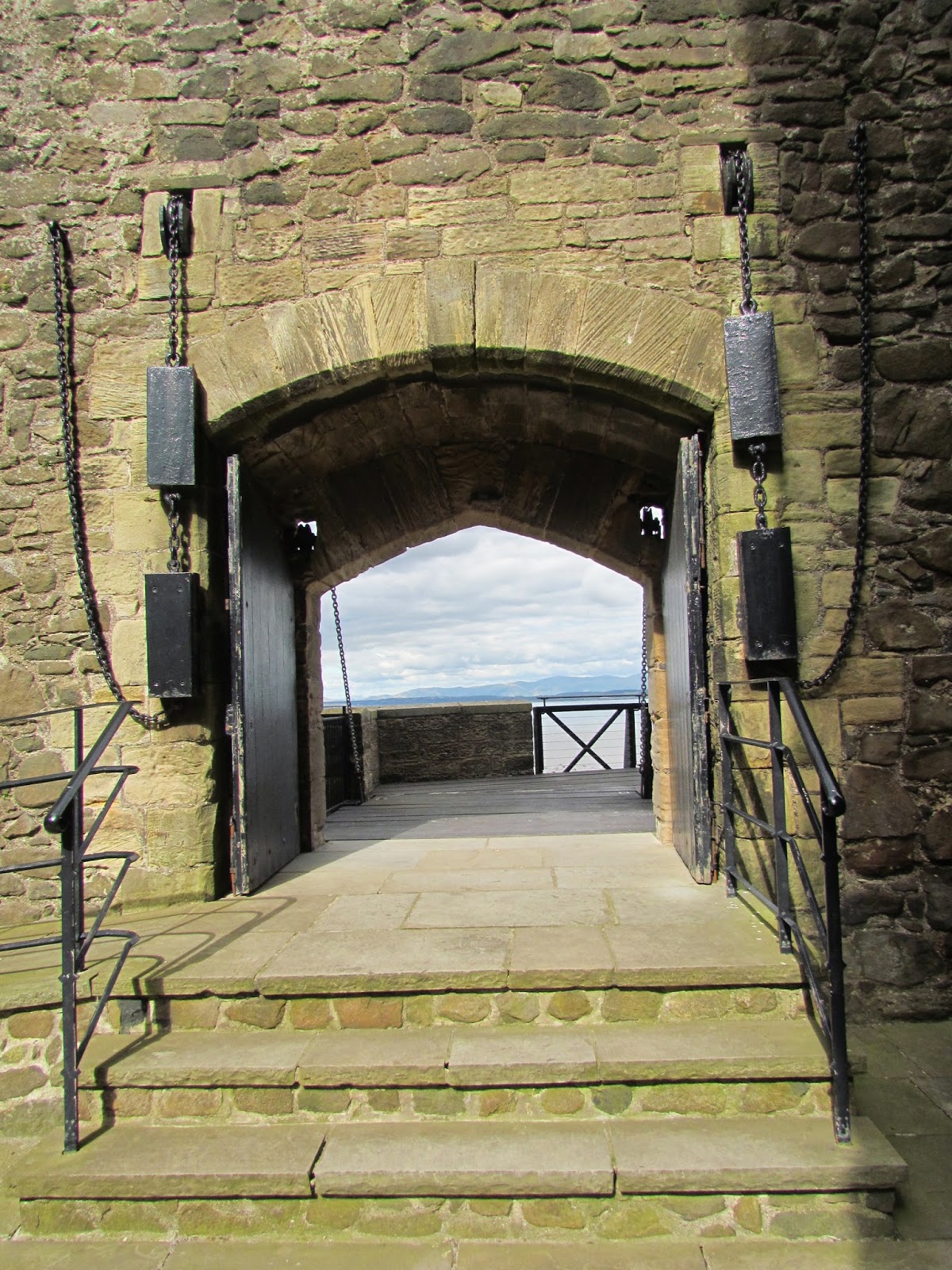 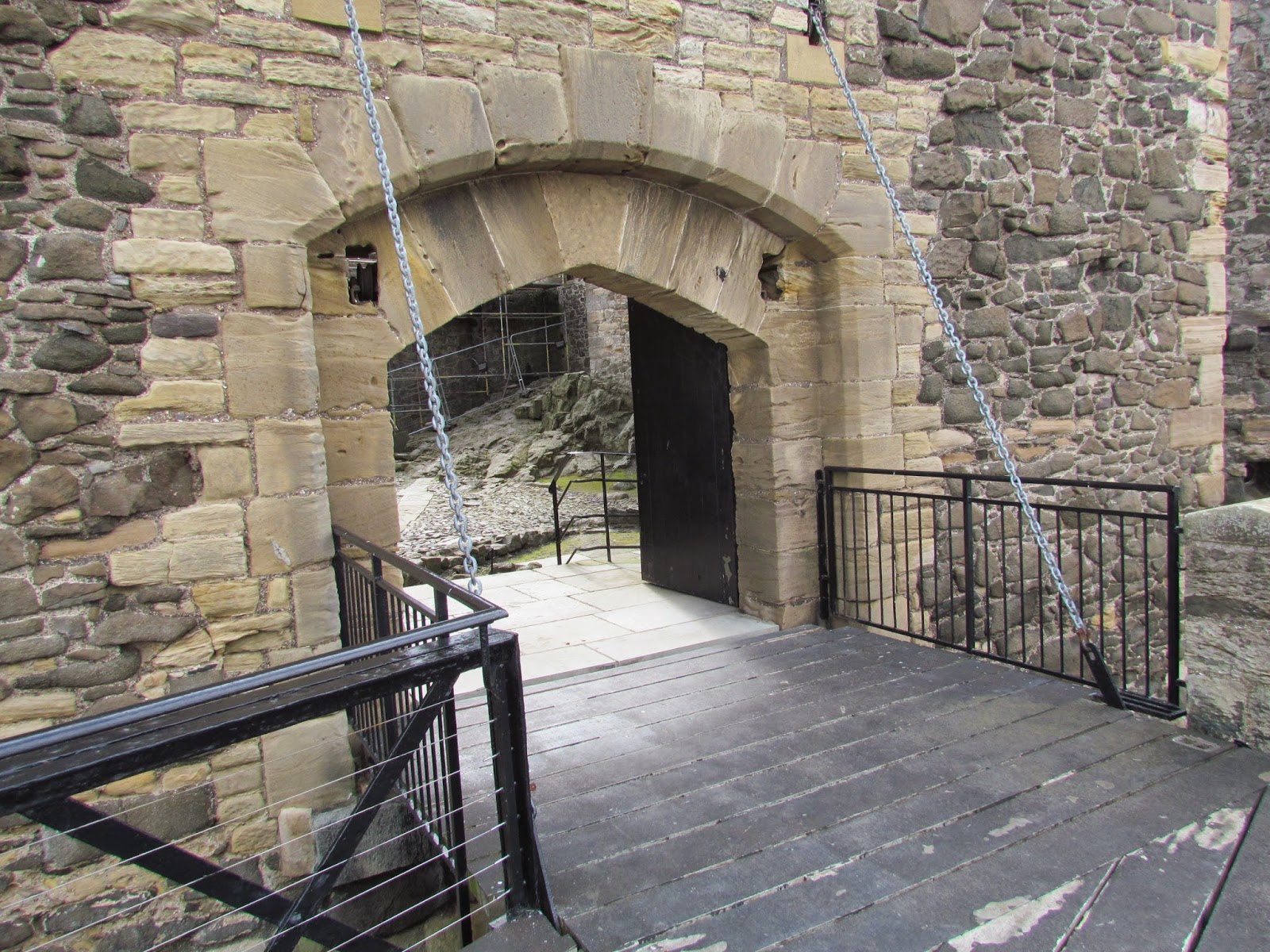 In fact the last drawbridge ever to be constructed in Britain was erected at Blackness and is still in working use. On the left you can see the machinery from the courtyard side and on the right from the seaward side, where it leads off from the pier. 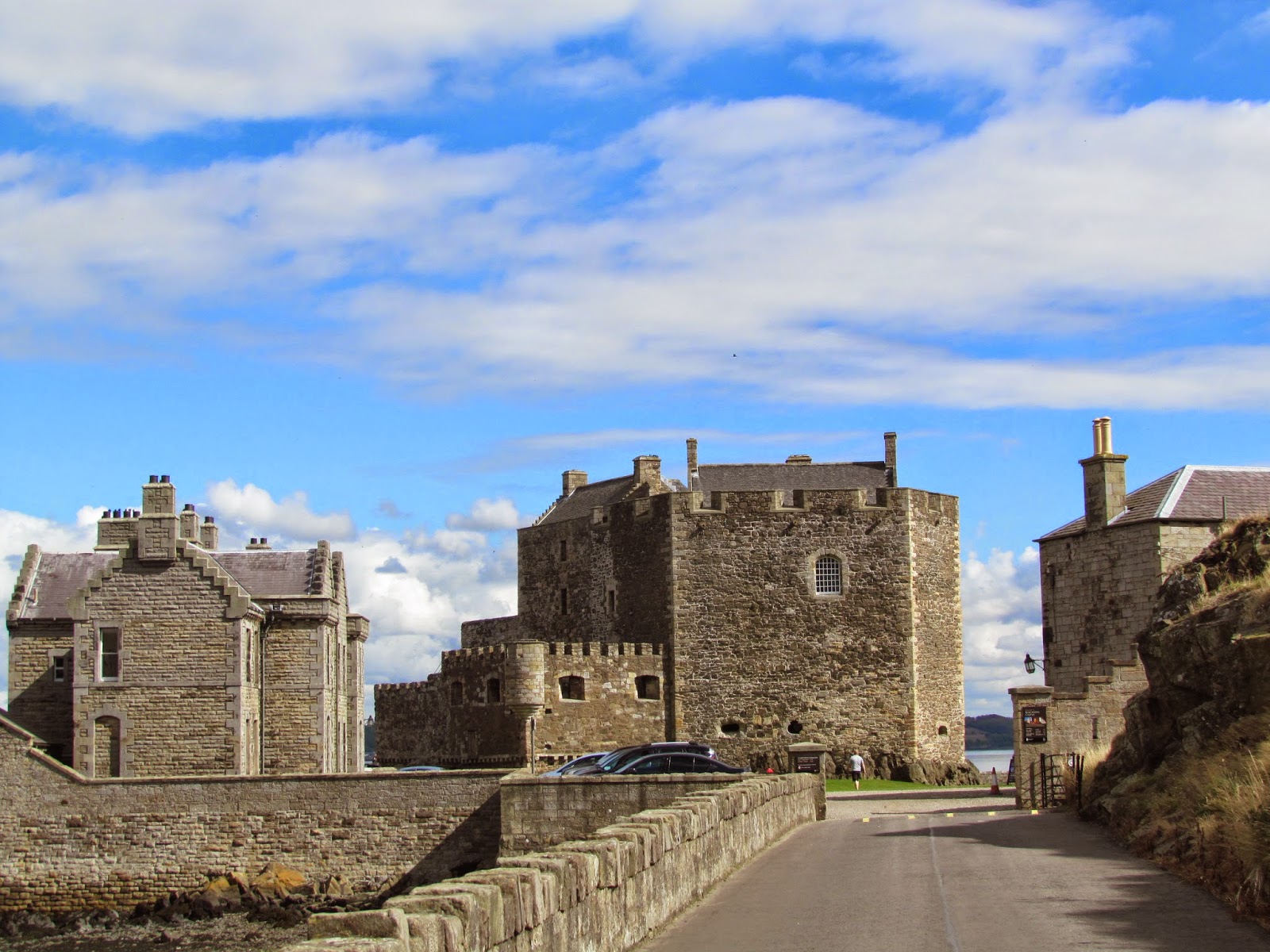 The castle became disused in the early twentieth century although there were suggestions that it could be brought back into service during the first World War.

Nowadays, its principal use has been as a dramatic film set, for example for Zeffirelli's Hamlet and other films and television series. 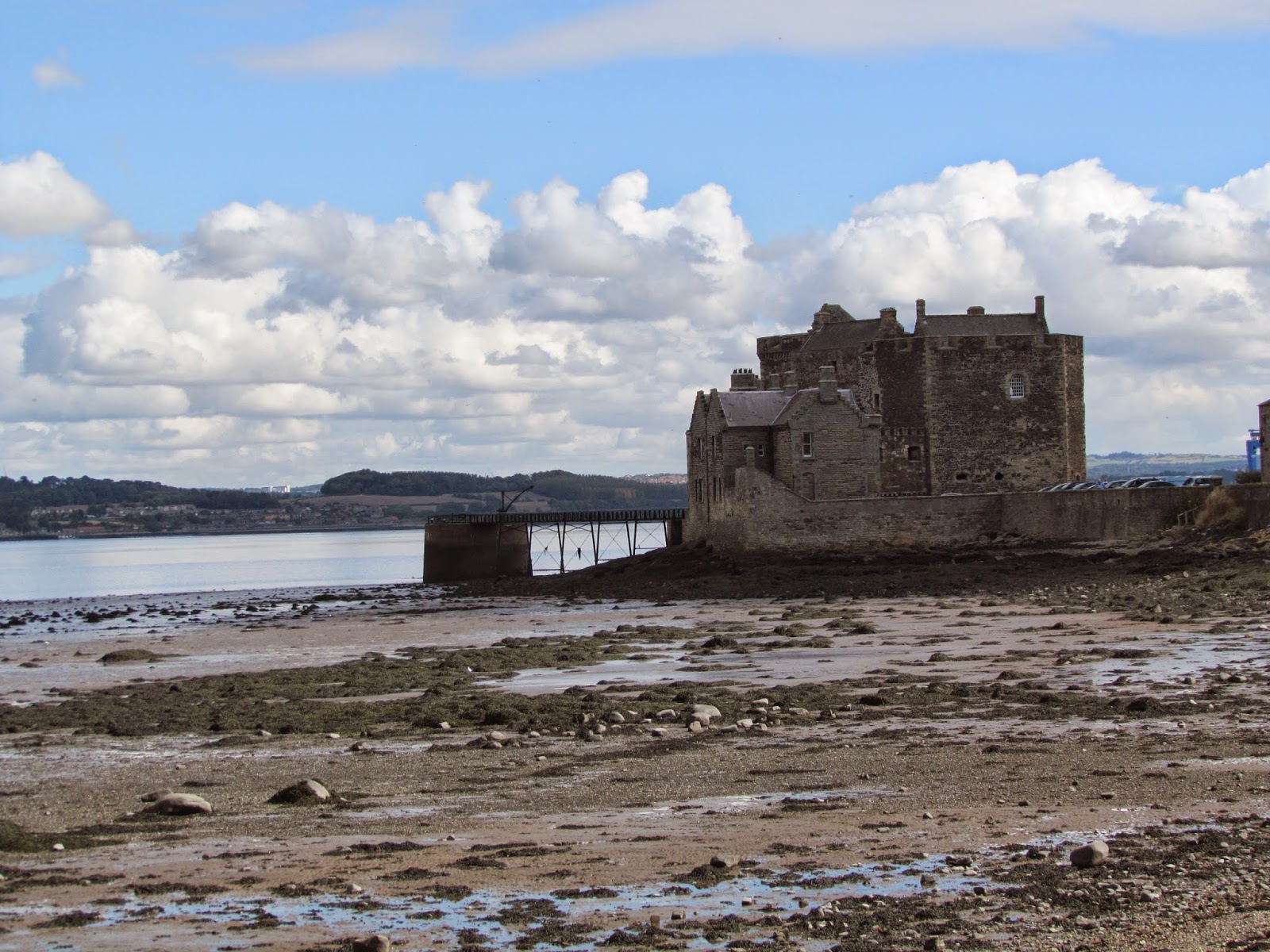 On the southern shores of the Firth of Forth, the great walls and towers of Blackness Castle remain a formidable landmark. Its daunting presence breaks skywards from the rocks and confronts all who might dare to threaten the safety of the realm. It is as impressive today as it was in the past.

Posted by Elisabeth Ritchie at 14:59