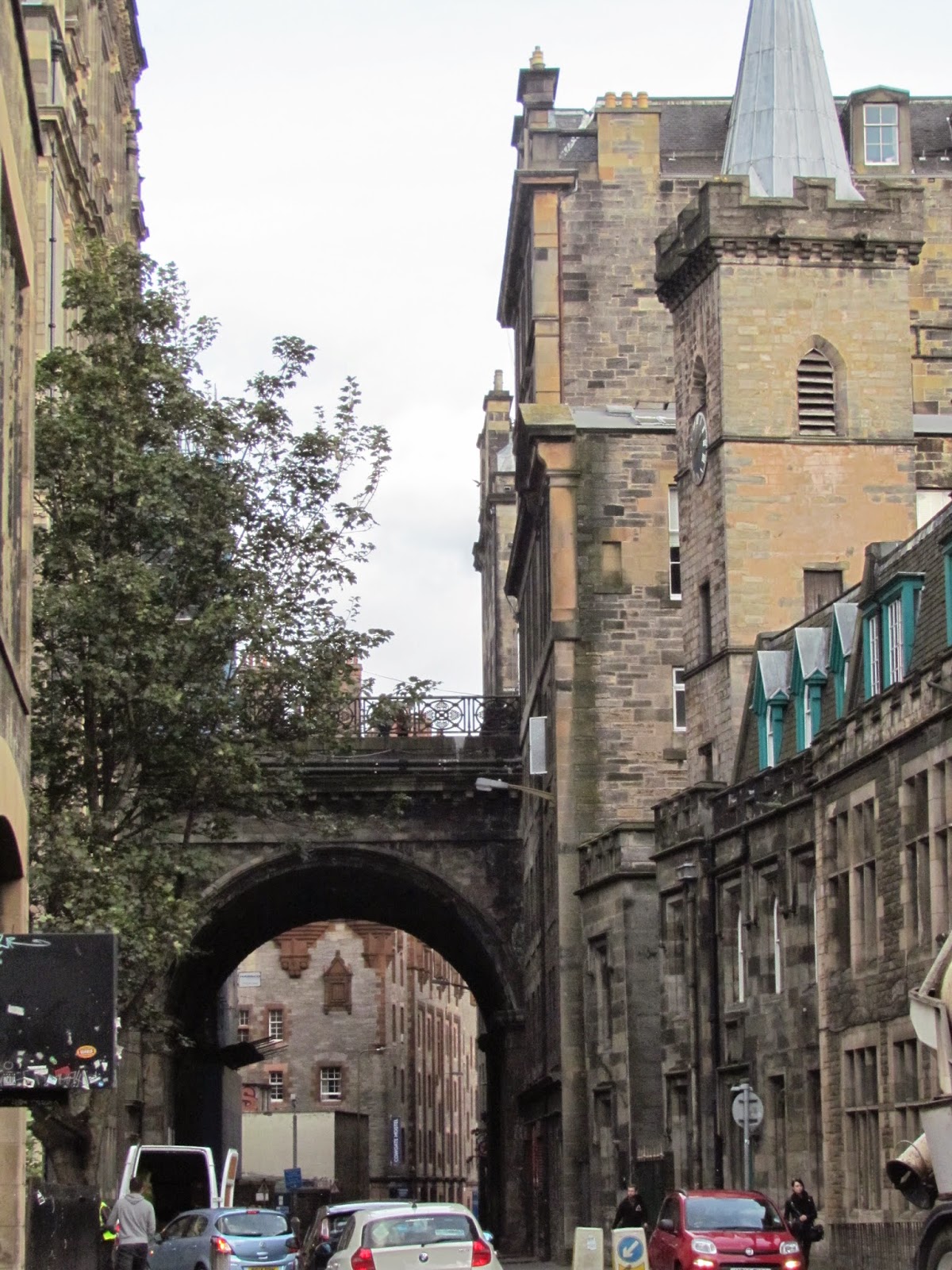 We found a small treasure the other day.

We have swept through the Cowgate often enough, as it is our standard route westwards out of the city. It can be a pretty dreary, nondescript street, certainly at a cursory view and particularly in the rain. Down in a hollow below the High Street and the Castle, the Cowgate is narrow, dark and, to be honest, not very salubrious. Indeed, 'sweeping through' is often the last thing we do, since its narrowness combined with almost continual roadworks can make any progress along its length pretty slow. 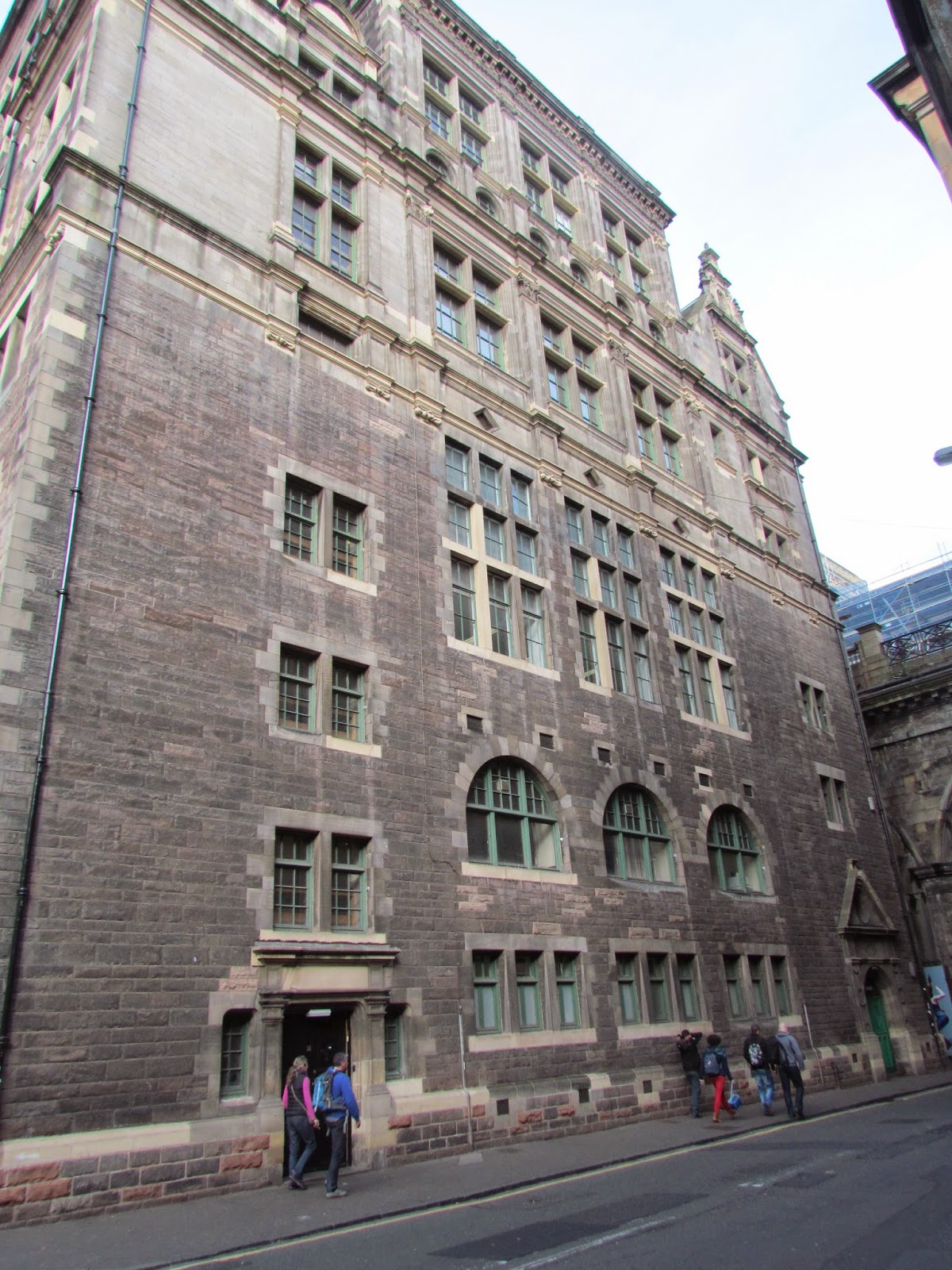 The Cowgate starts where the Flodden Wall (below right) passes from The Pleasance, where you can still see a remnant, up St Mary's Street, using those houses there at the time as part of its defensive structure. The Wall was built in 1514 after the dreadful defeat of the army of James IV by the English.

In mediaeval times, cattle were driven through the Cowgate to the Grassmarket. ('Gate' used to mean 'road'.) In the sixteenth century, the Cowgate was one of the richest streets in the city, as you can see from the once-splendid building on the left.

Craftsmen carried out their trades on the Cowgate, leaving their names on some of the alleyways. 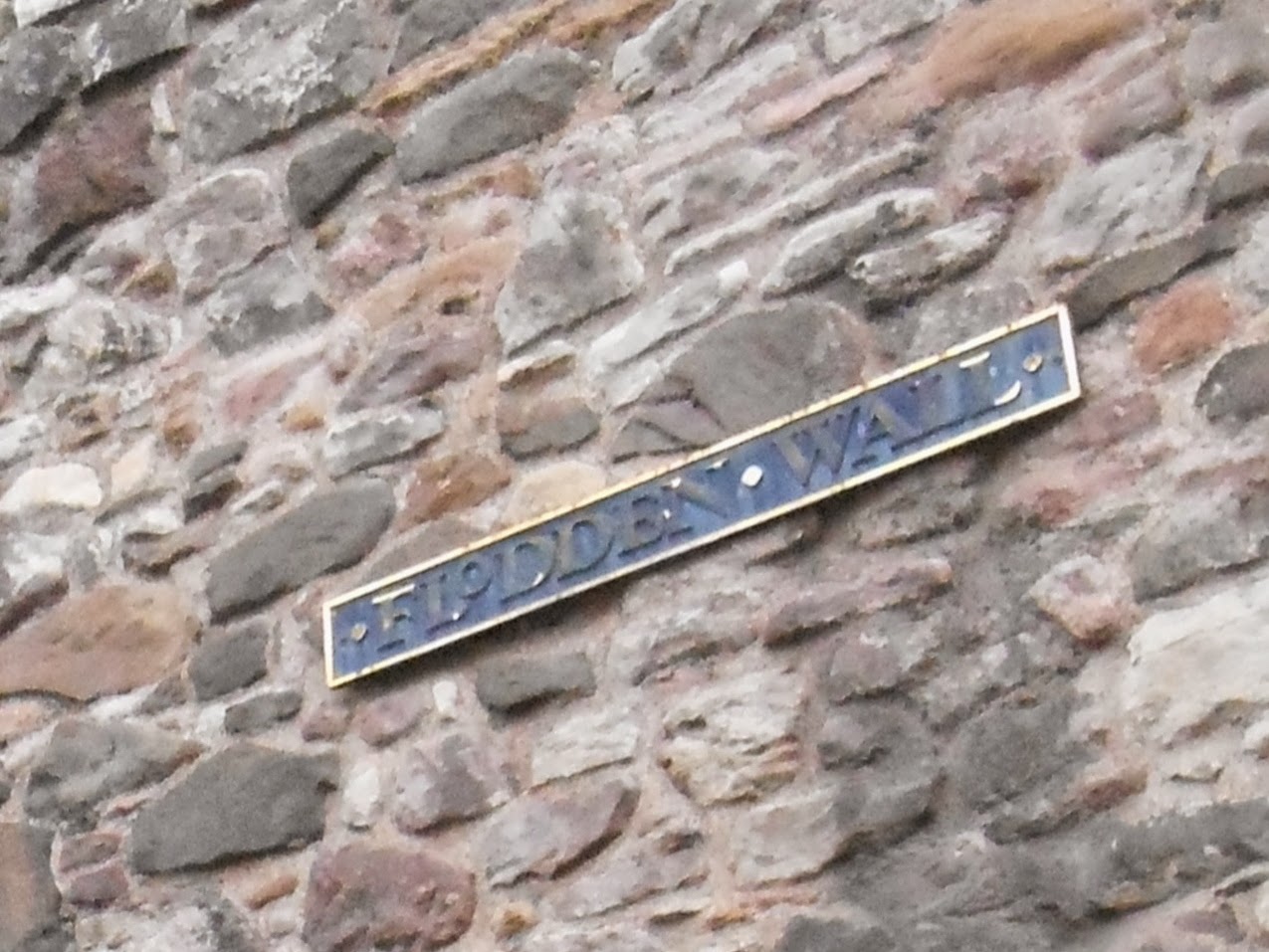 Tailors' Hall (right), a guildhall built in 1621, must have been a wonderful building in its day. Here in 1638, the Covenant was signed before it was taken up to Greyfriars Kirk. In Cromwell's time, ten years or so later, it was used as a courthouse by the Scottish Commissioners to manage estates confiscated from Royalist landowners. Sadly, Tailors' Hall has been turned into a student pub and budget hotel, the insides gutted and the courtyard outside filled with all the detritus of a student drinking culture. What a tragedy!

Other powerful guilds also had their halls in the area. Round the corner, in Candlemakers' Row, the eponymous guildhall still stands.


Nowadays, the Cowgate's tall buildings have become hostels for students, backpackers and, sadly, the homeless, of whom there are many, even in prosperous Edinburgh. 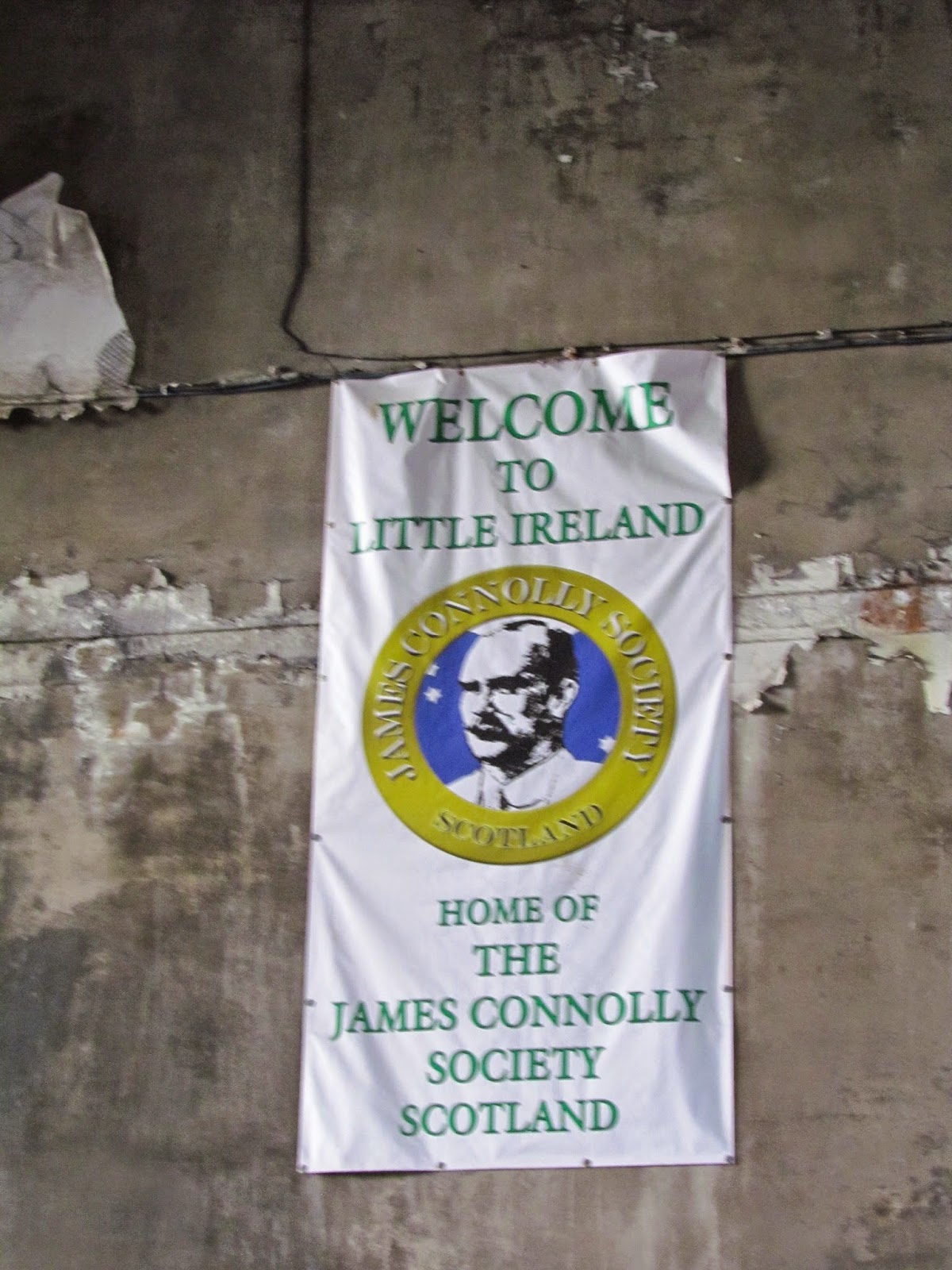 For years the Cowgate has been the haunt of the poor, including, in the nineteenth century, Irish immigrants. Indeed, it has been nicknamed Little Ireland. James Connelly,the Irish socialist and republican, was born in the Cowgate in 1888.


The beautiful Church of St Patrick at the eastern end of the street, founded in 1772 and now served by the Redemptorists, ministered to the needs of the Roman Catholic poor. The congregation of St Patrick's also established Hibernian Football Club in 1875 and has in its possession various trophies from that time.

However, the Cowgate's history and that of the Grassmarket to which it leads, has been more closely associated with the rise of Protestantism than the continuation of the Old Religion. Which brings me - at last - to the treasure buried in the Cowgate, just to the east of its junction with Candlemakers' Row. That treasure is the Magdalen Chapel. 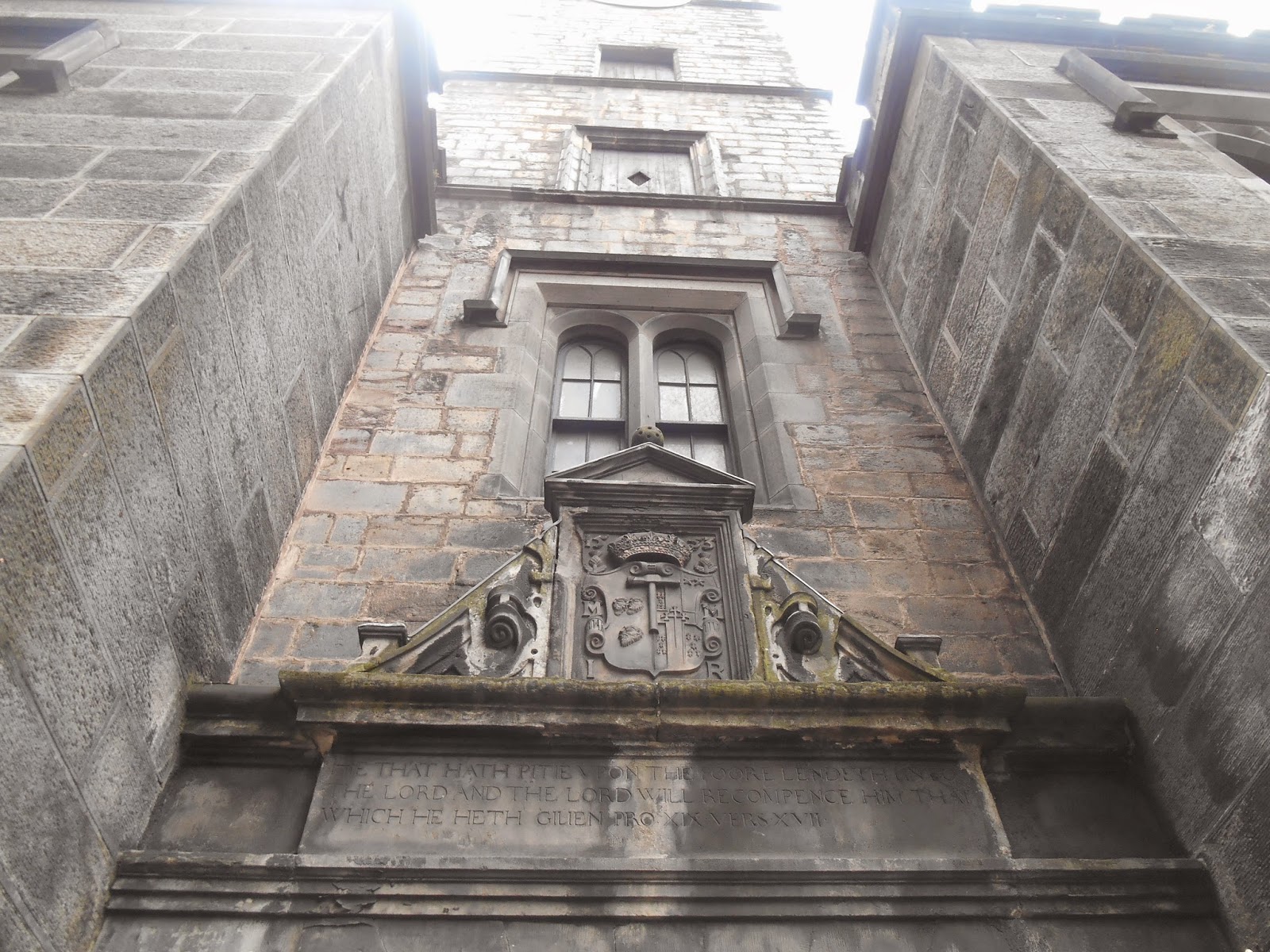 The facade of the Magdalen Chapel merges with the line of the street so that, unless you look closely, you would scarcely know it was there. Below its modest tower, you will see the clue that tells you that you have reached the right place: the symbol of the Hammermen over the doorway. For this is one of the country's last surviving guild chapels. The building also served as guildhall.

Guilds were an early kind of trades union. They ensured that apprentices went through appropriate training and produced work which met their exacting standards. They also protected the interests and wellbeing of their members. Here in Edinburgh, the foundation of the chapel for the Incorporation of Hammermen included a hospital or almshouse built next door to it in the Cowgate. The hospital provided accommodation for seven poor Bedesmen, whose duty it was to offer up prayers for the souls of the departed, in particular for that of Mary Queen of Scots.

The Crown over the hammer signifies the guild's Royal connections: the links between the chapel's founder Michael Macquhane, a prominent Edinburgh citizen who died in 1538, and King James V. Mary of Guise, widowed consort of James V, Queen Regent and mother of Mary Queen of Scots, was also a patron and arranged for academic lectures to be held in the chapel. The religious life of the chapel went through some ups and downs as time went on, but we'll leave these until we've actually gone inside. 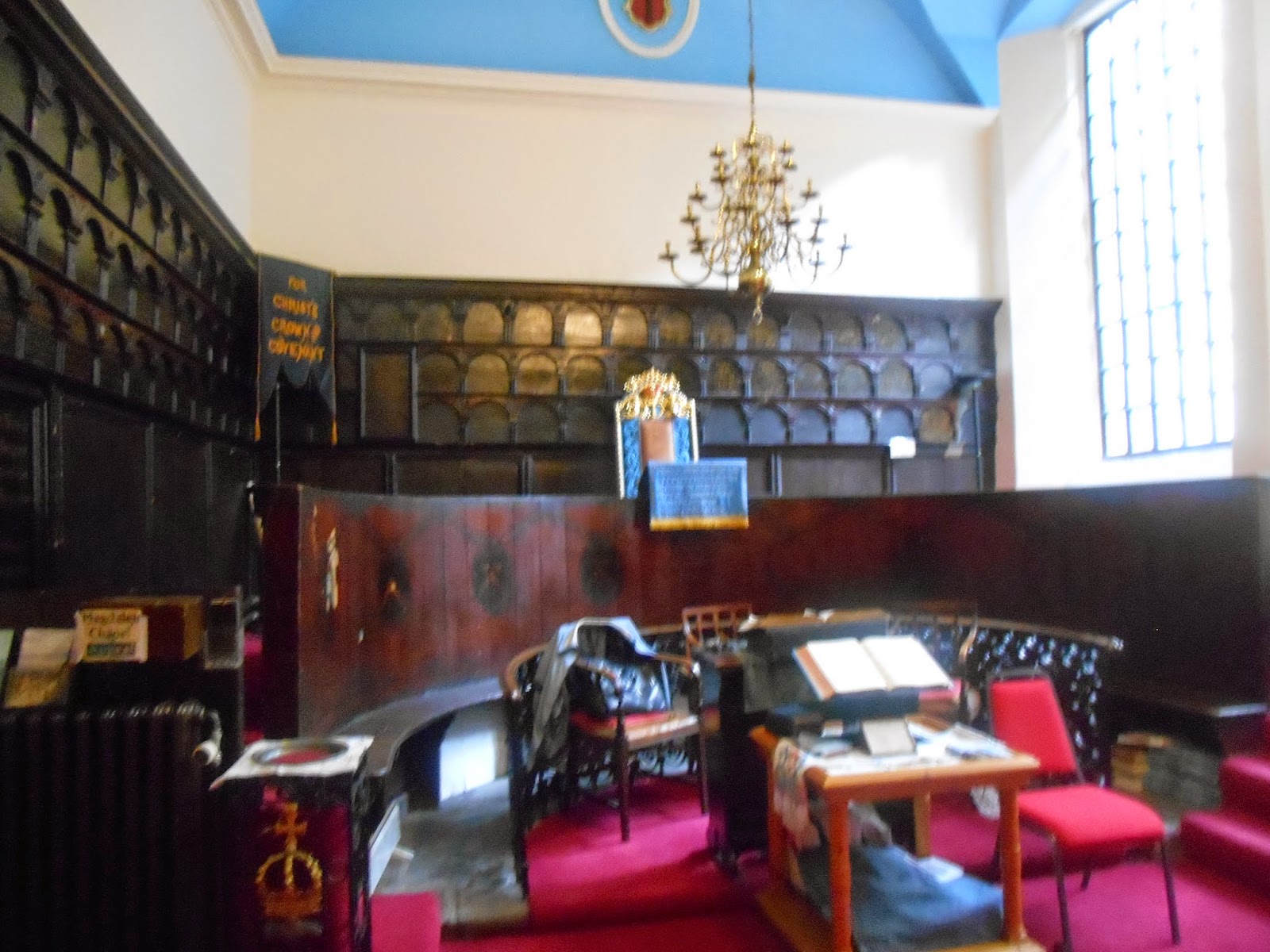 When you ring the bell and walk across the threshold, you step right back into the seventeenth century. Directly opposite you as you enter the chapel is the oldest stained glass in Scotland, Pre-Reformation.

The roundels represent the Lion Rampant (the Royal Arms of Scotland); the Arms of Mary of Guise; the arms of the founder Michael Mcquhane; and the arms of Michael Mcquhane impaled with those of his wife Janet Rynd, who had continued to raise money for the foundation after her husband died.

Two sides of the chapel, which is the size of a roomy sitting room, are lined with gilded wooden plaques, of which more later. At the east end, on a dais, is the splendid Deacon's Chair, which was used by the presiding official of the Hammermen's Incorporation. It has been beautifully restored to its original condition, the wood painted in traditional Portobello Blue, eighteenth century leather near the age of the original used for upholstering. It now looks just as it would have done in 1708. Here too, on the back of the chair, is the Hammermens' insignia. Indeed, look around you and you see the hammer and crown everywhere. No hammer and sickle for these early trade unionists! 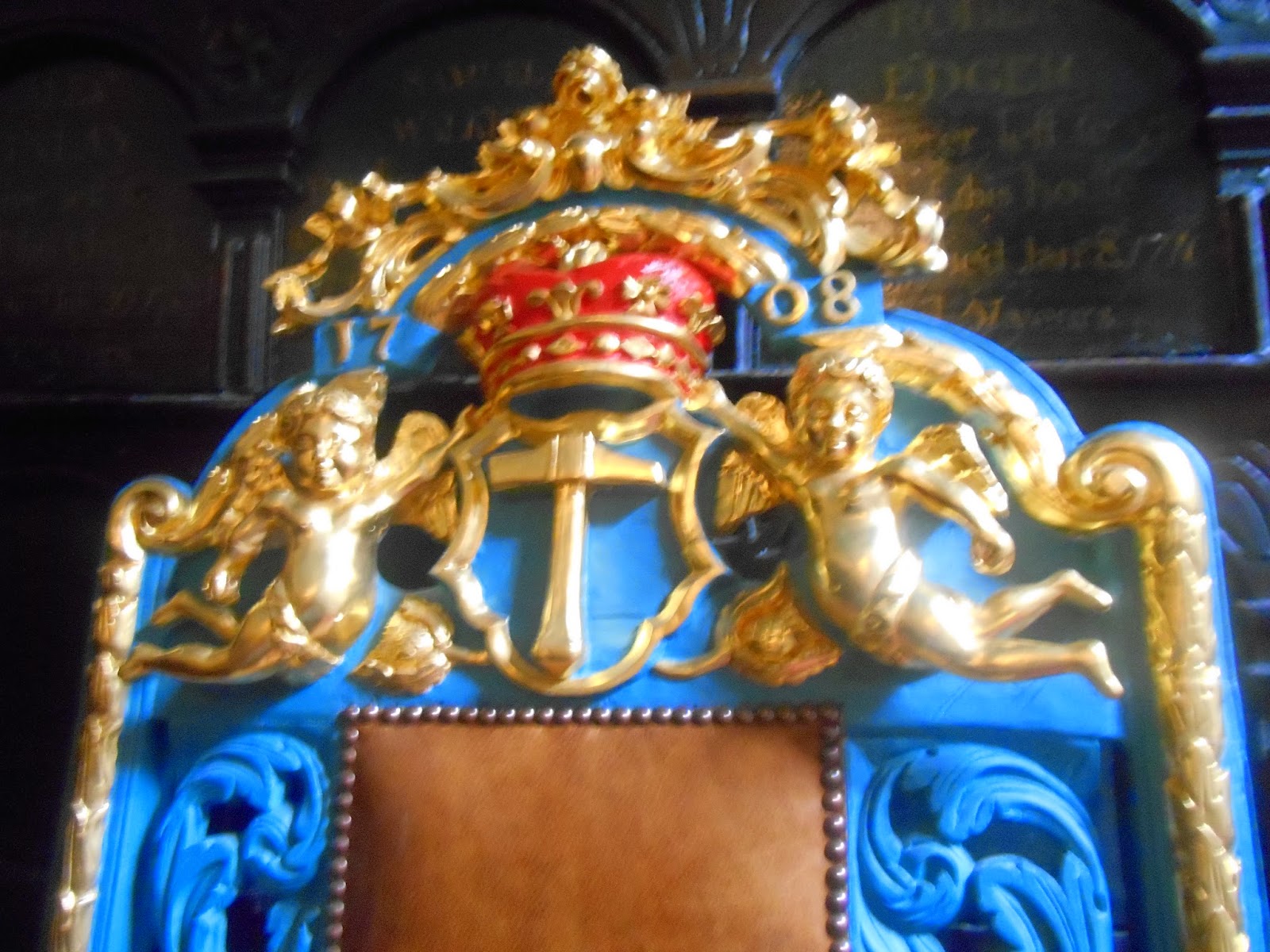 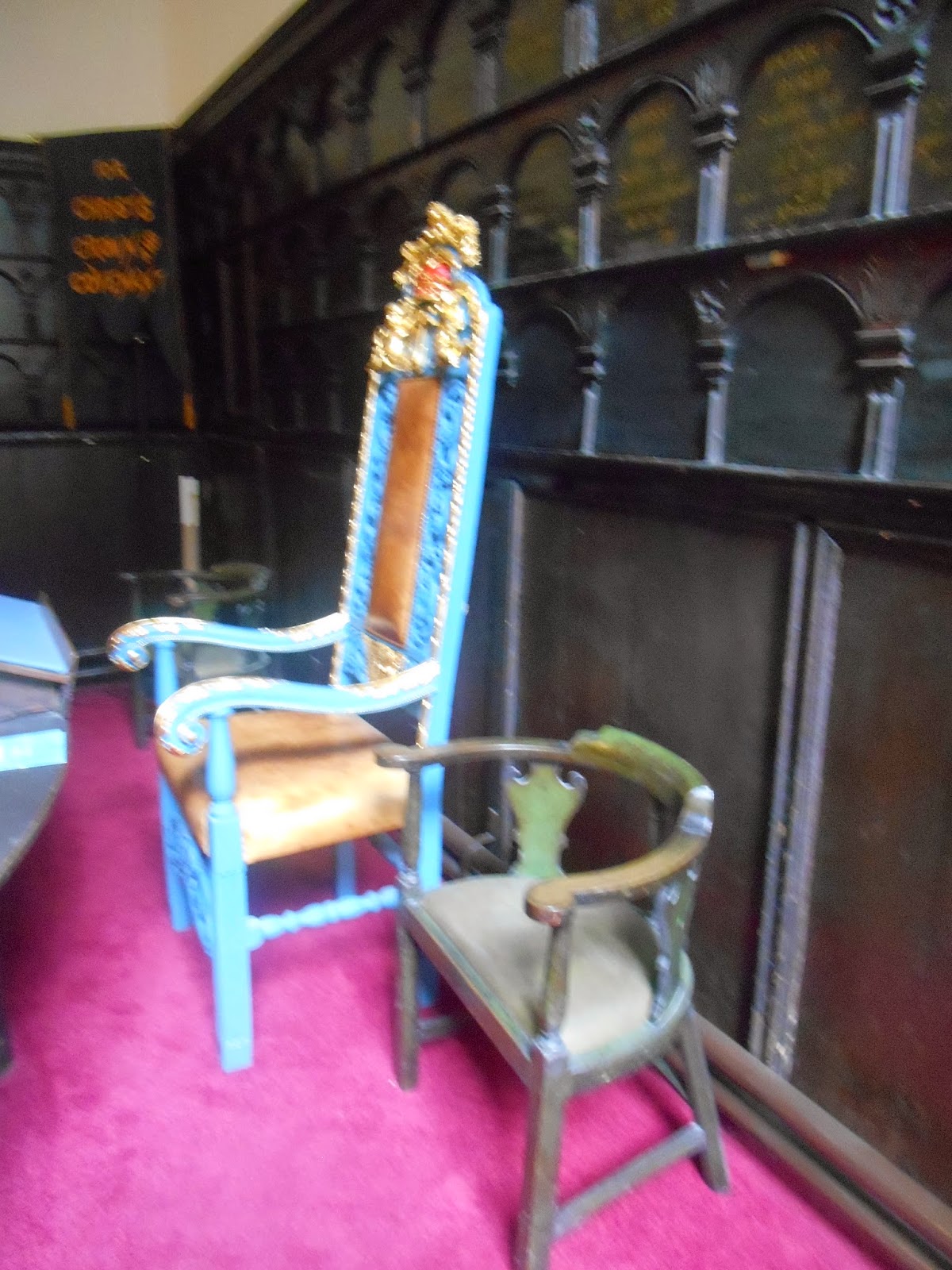 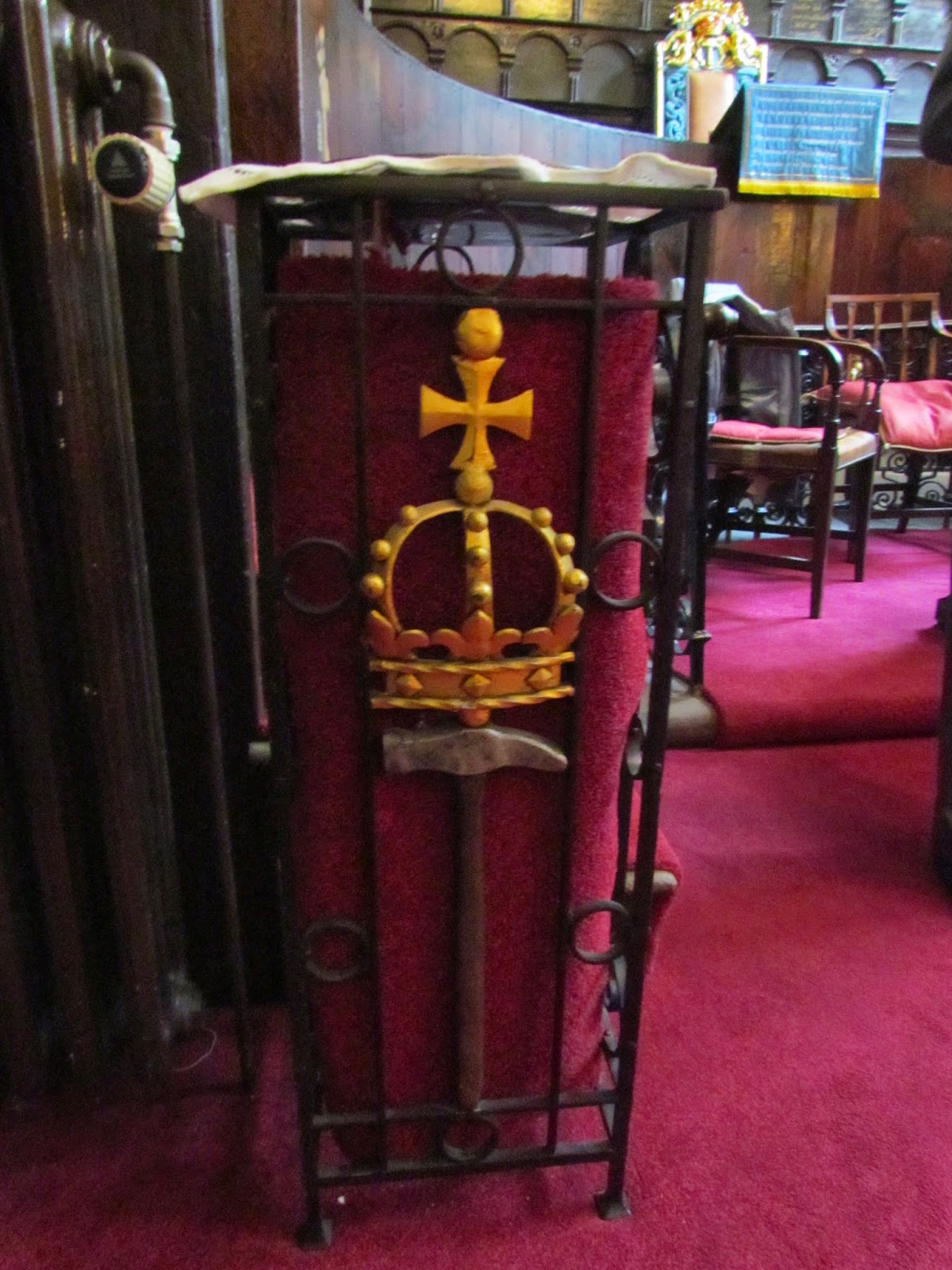 The hammer and crown is on the ceiling above the Deacon's chair and on the western wall. It is also there on the stand for the offering plate.

The most charming representations of the guild symbol, however, are on the window wall, two stone carvings which originally adorned the doorway. 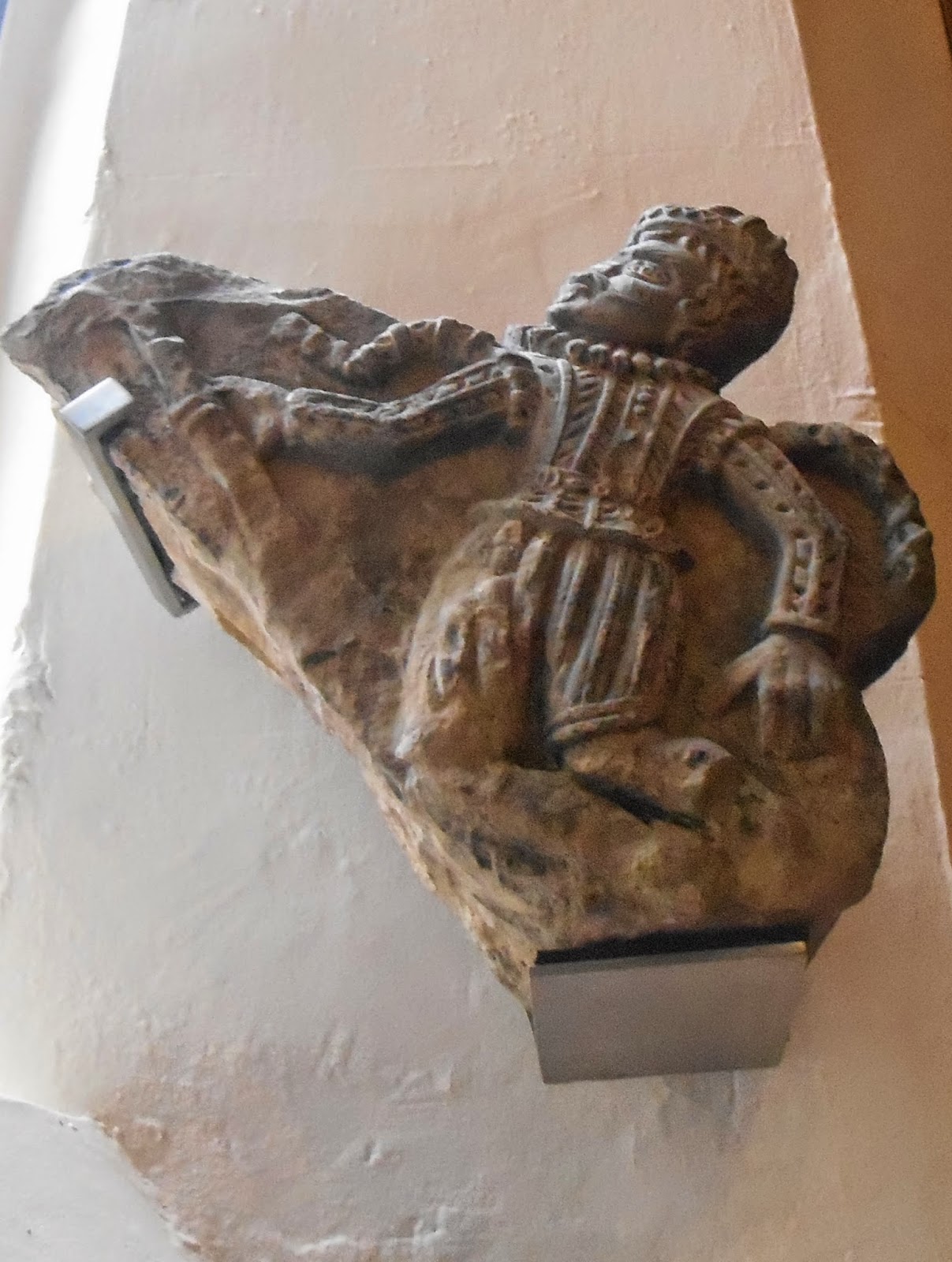 Here the two hammermen are in their beautifully-executed sixteenth century garb: long robe, hood and buckled shoes on the left and elaborate hammerman's livery on the right.  Both are still holding their hammers. 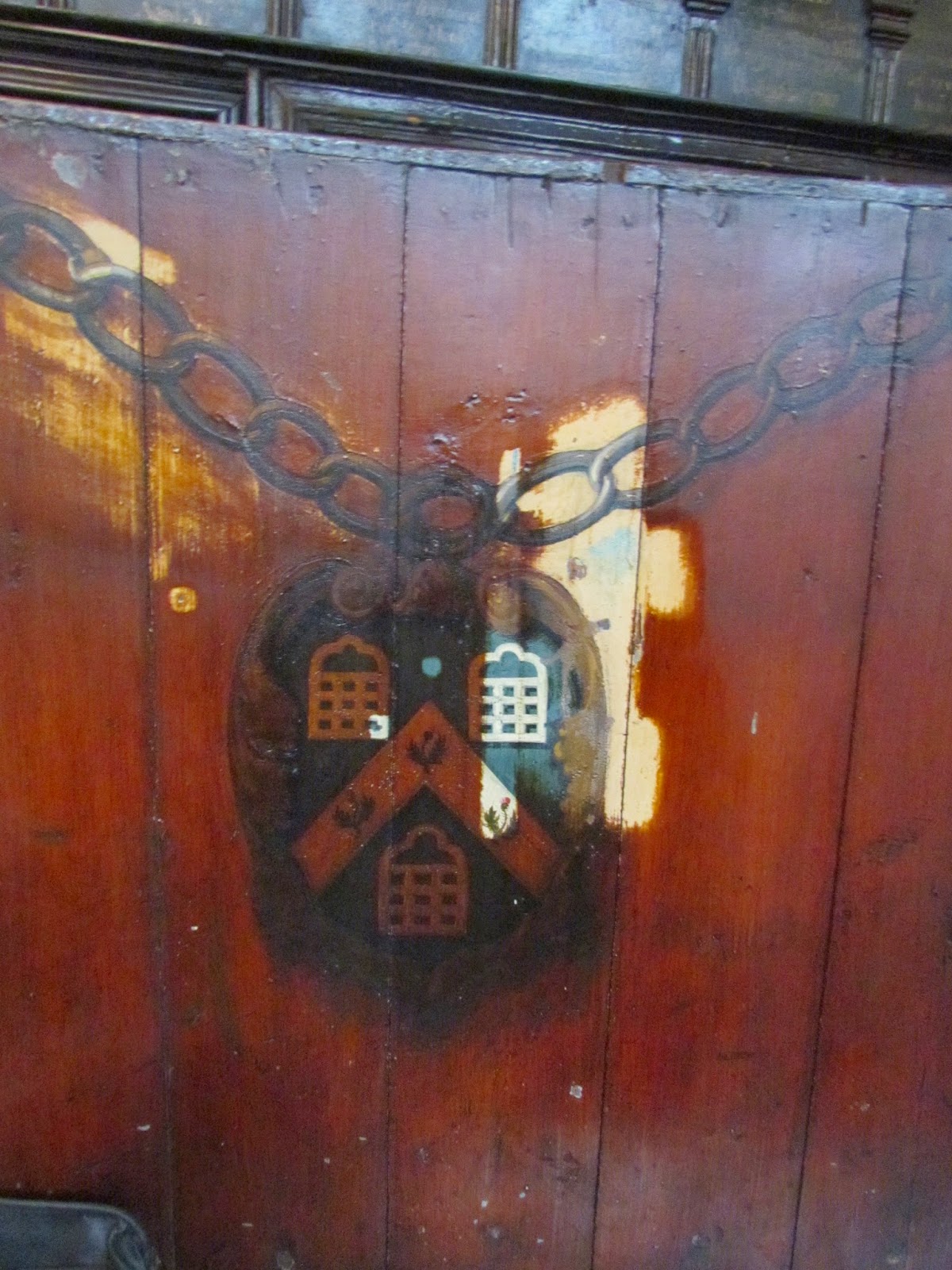 The chapel did not just cater for this particular trade however. Several other guilds were also included, as long as they involved the three key elements of the hammermen's work: hand, hammer and metal. So cordiners (rope makers), goldsmiths, fleshers (butchers), masons and (truly) bonnetmakers also gathered here, about fourteen trades in all. You can see the symbols of some of the trades on the wooden screen at the front of the chapel. 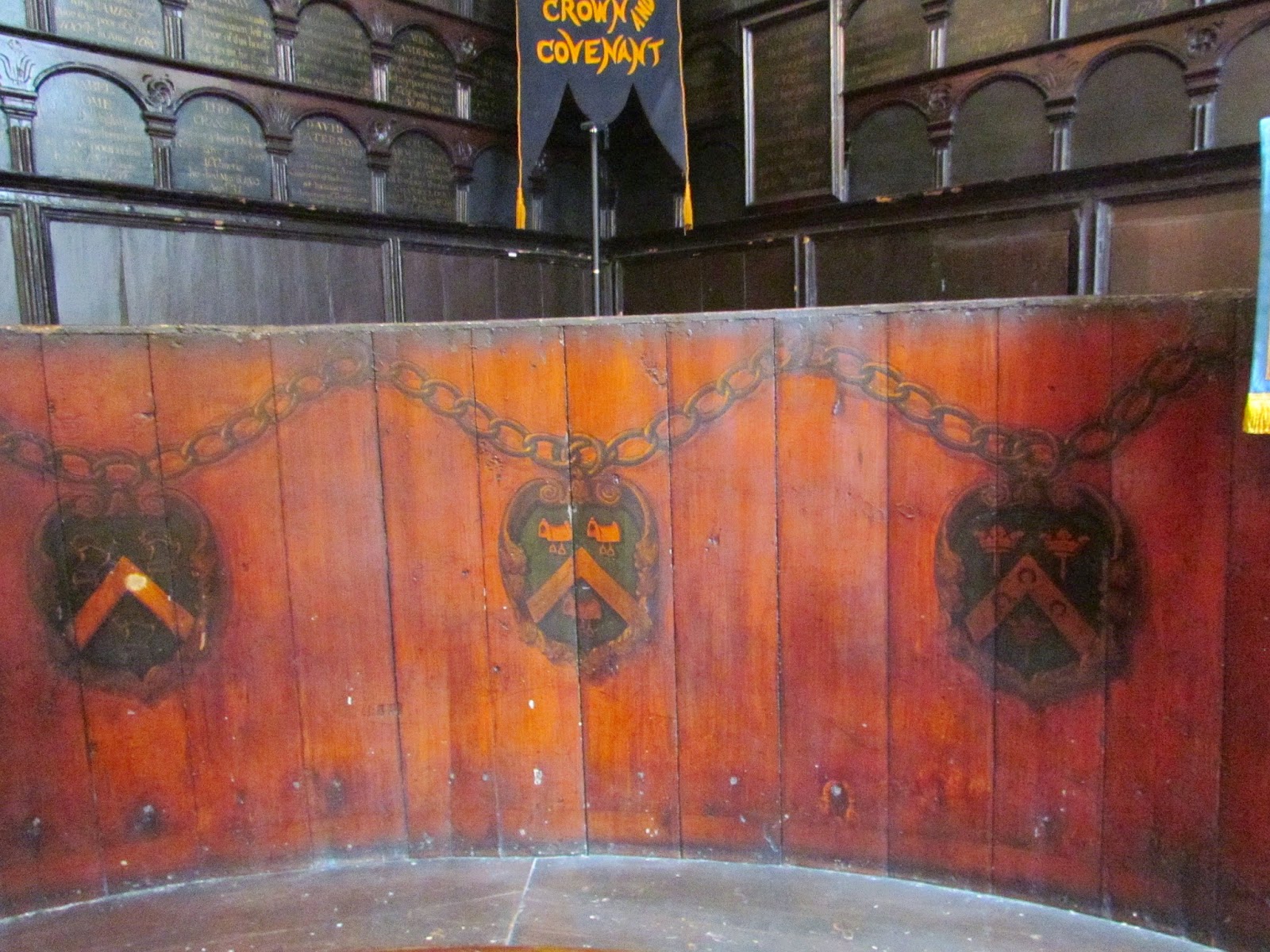 The symbols are also painted on the large wooden board which originally stood above one of the doorways, now sadly faded. 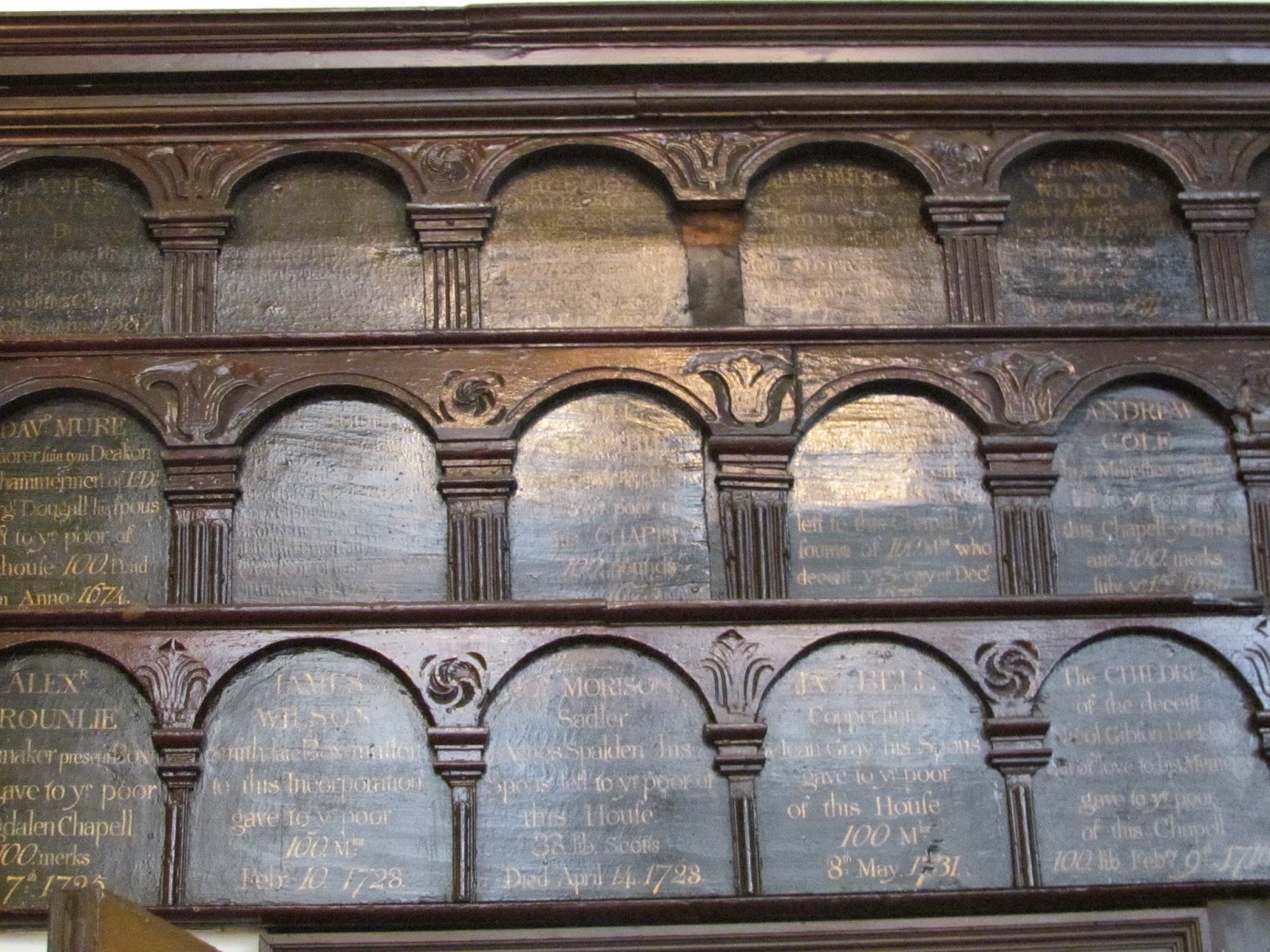 However, I started off by mentioning the gilded plaques which line the walls of the chapel. These plaques record the donations which benefactors gave to the hospital over the years. Here are photographs of a selection of those plaques which were erected over a period of 250 years from 1533. 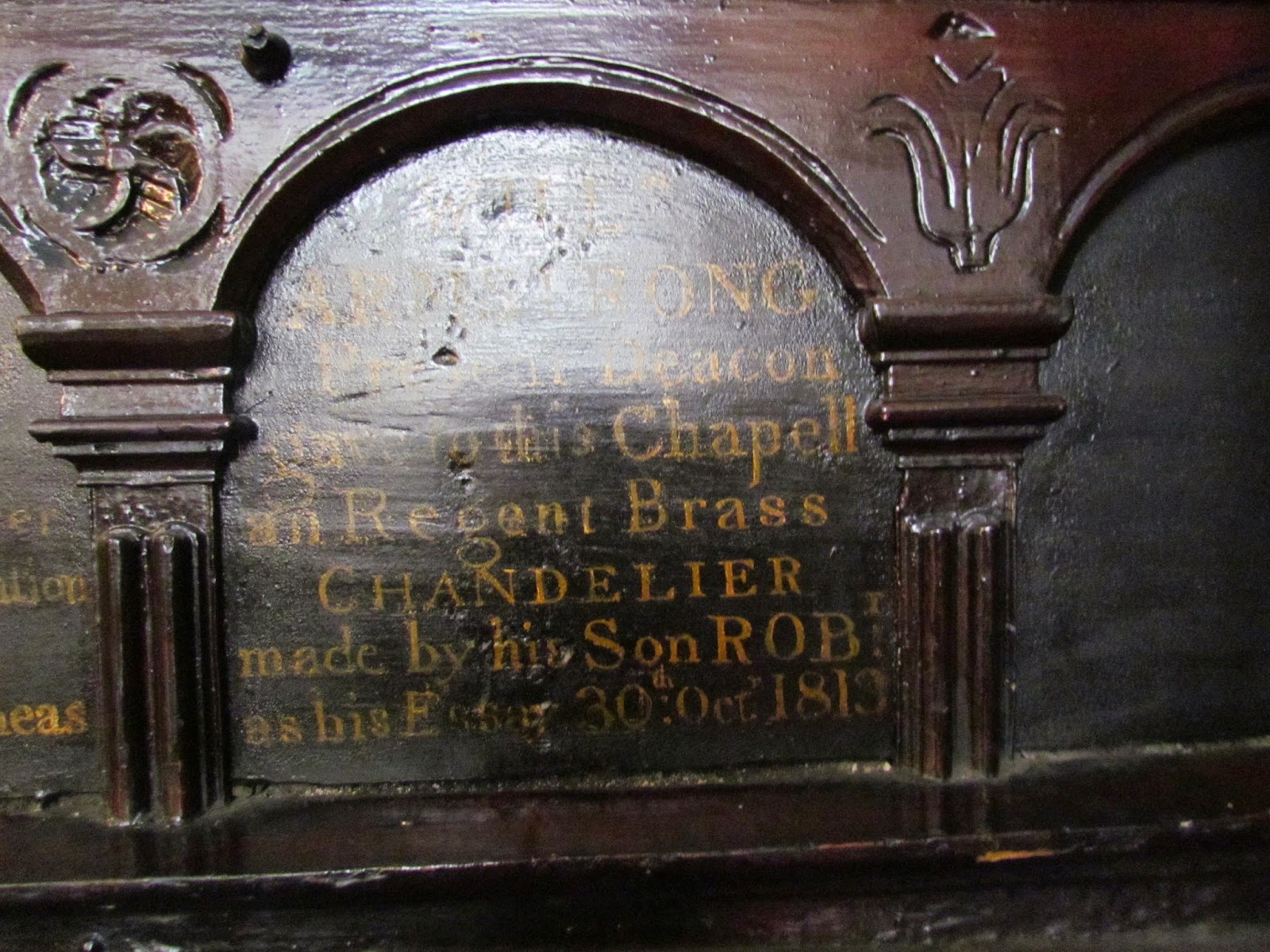 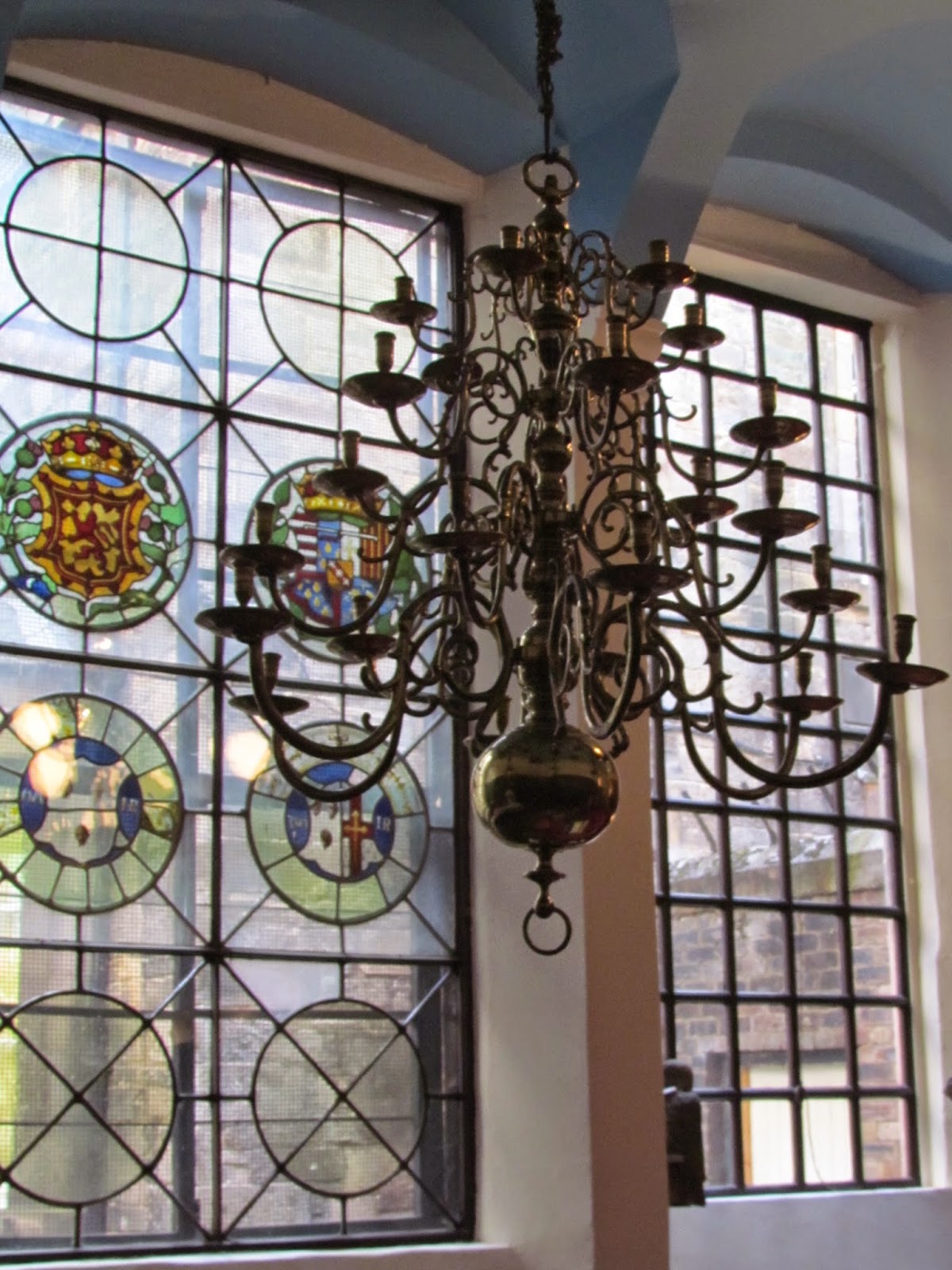 This plaque records the donation of a brass chandelier made in 1813 as an apprentice piece by one of the guildsmen's sons. The chandelier still hangs in the chapel. 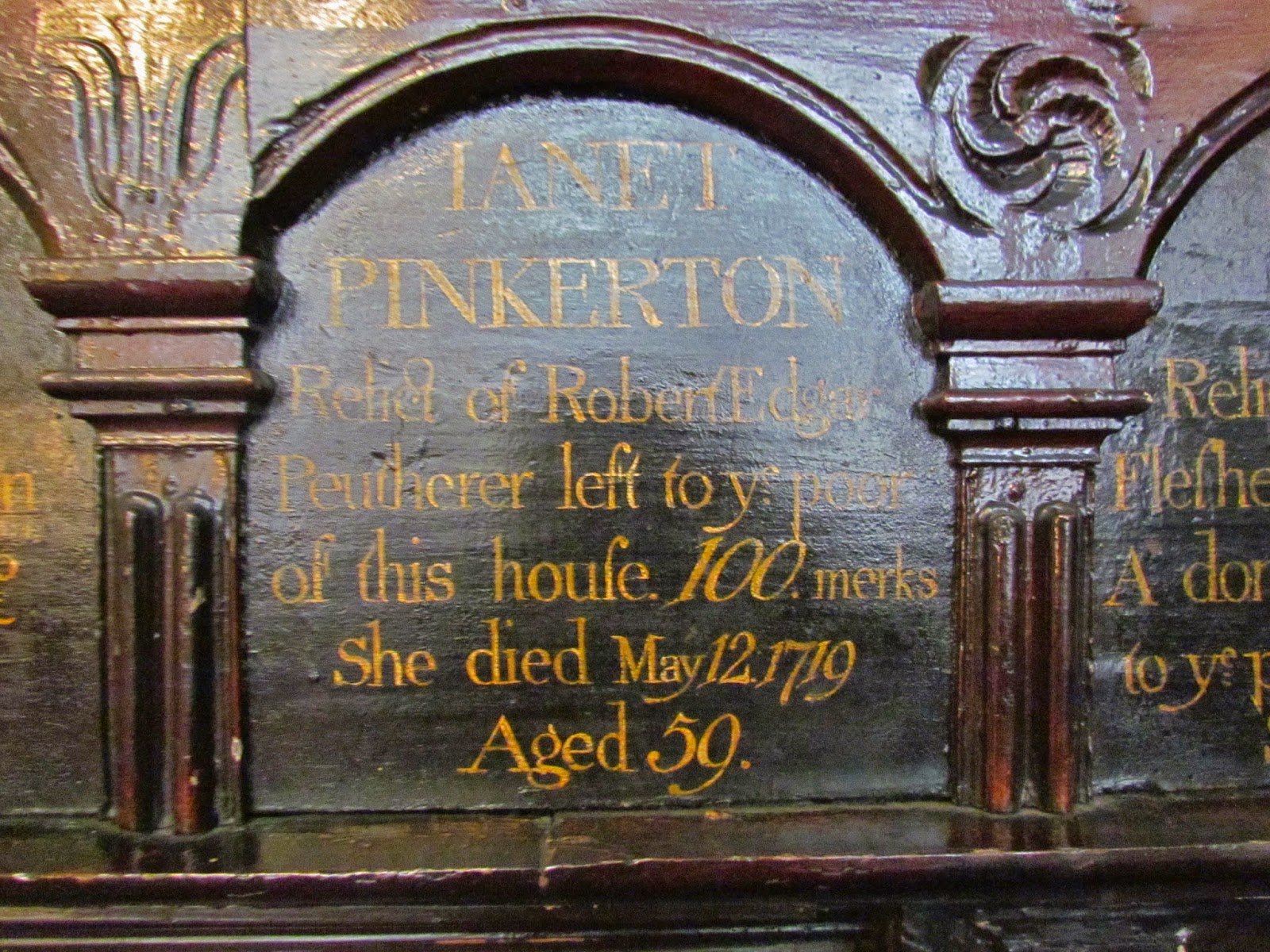 Janet Pinkerton left the chapel 100 merks when she died in 1719. 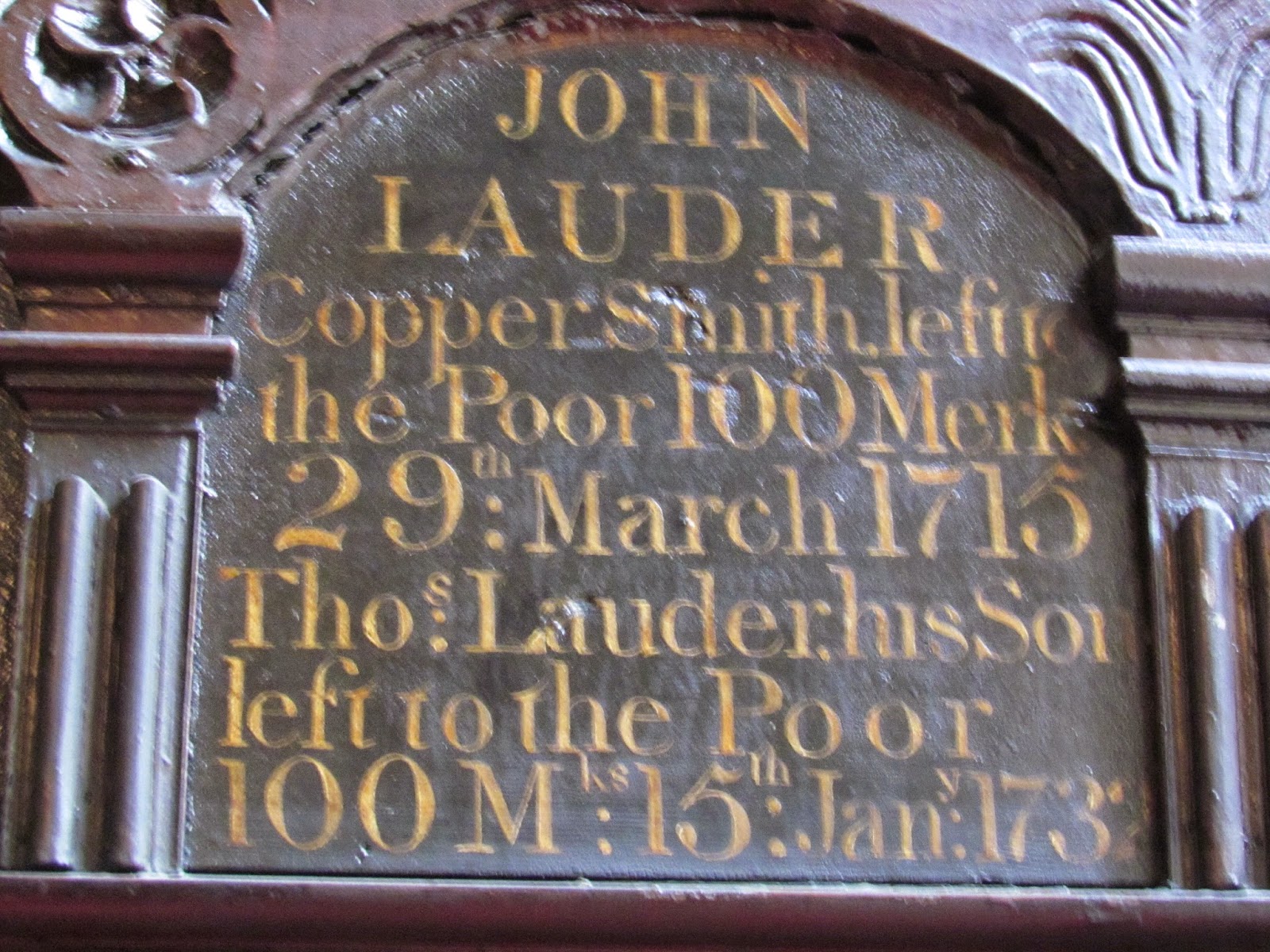 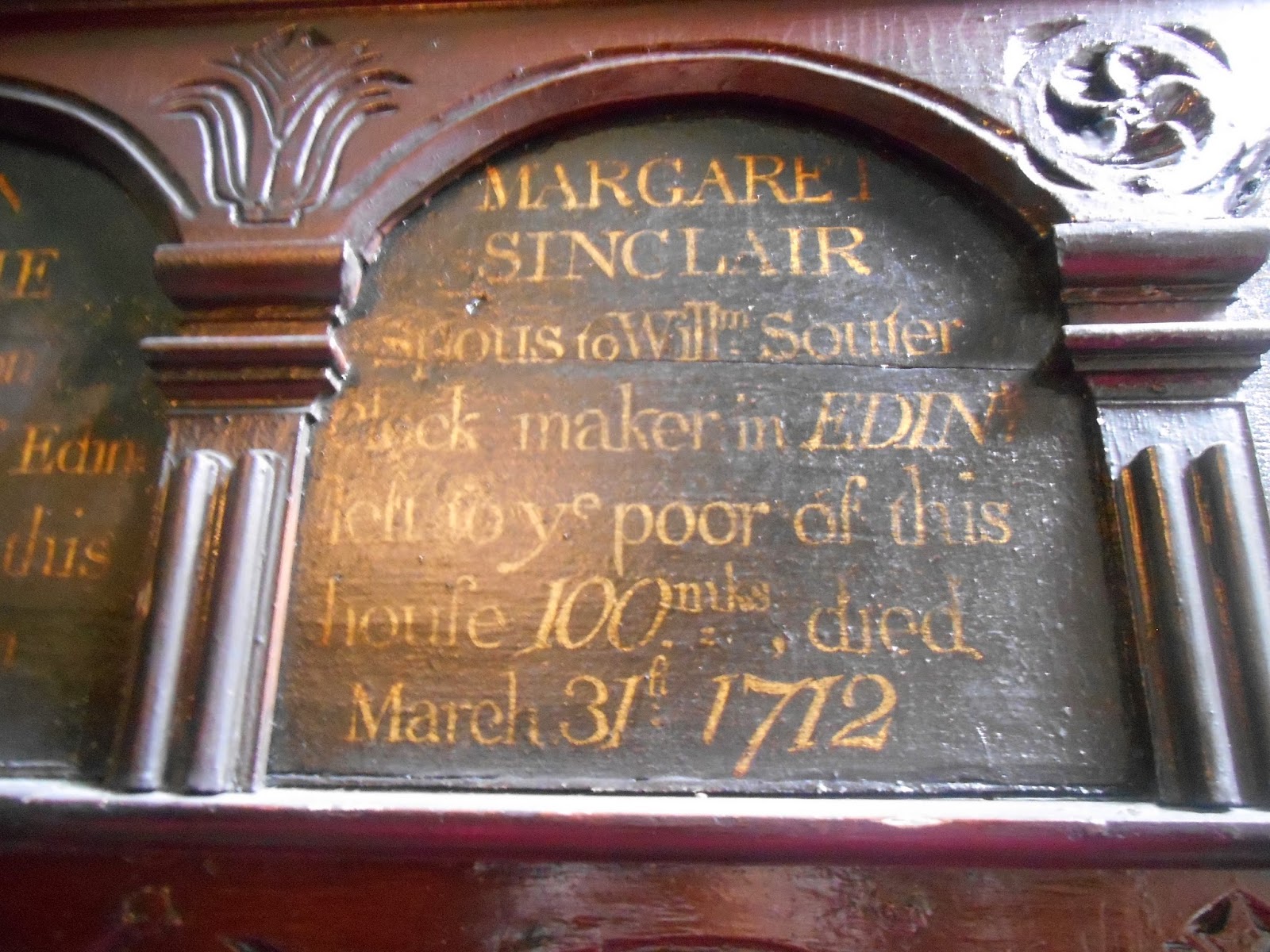 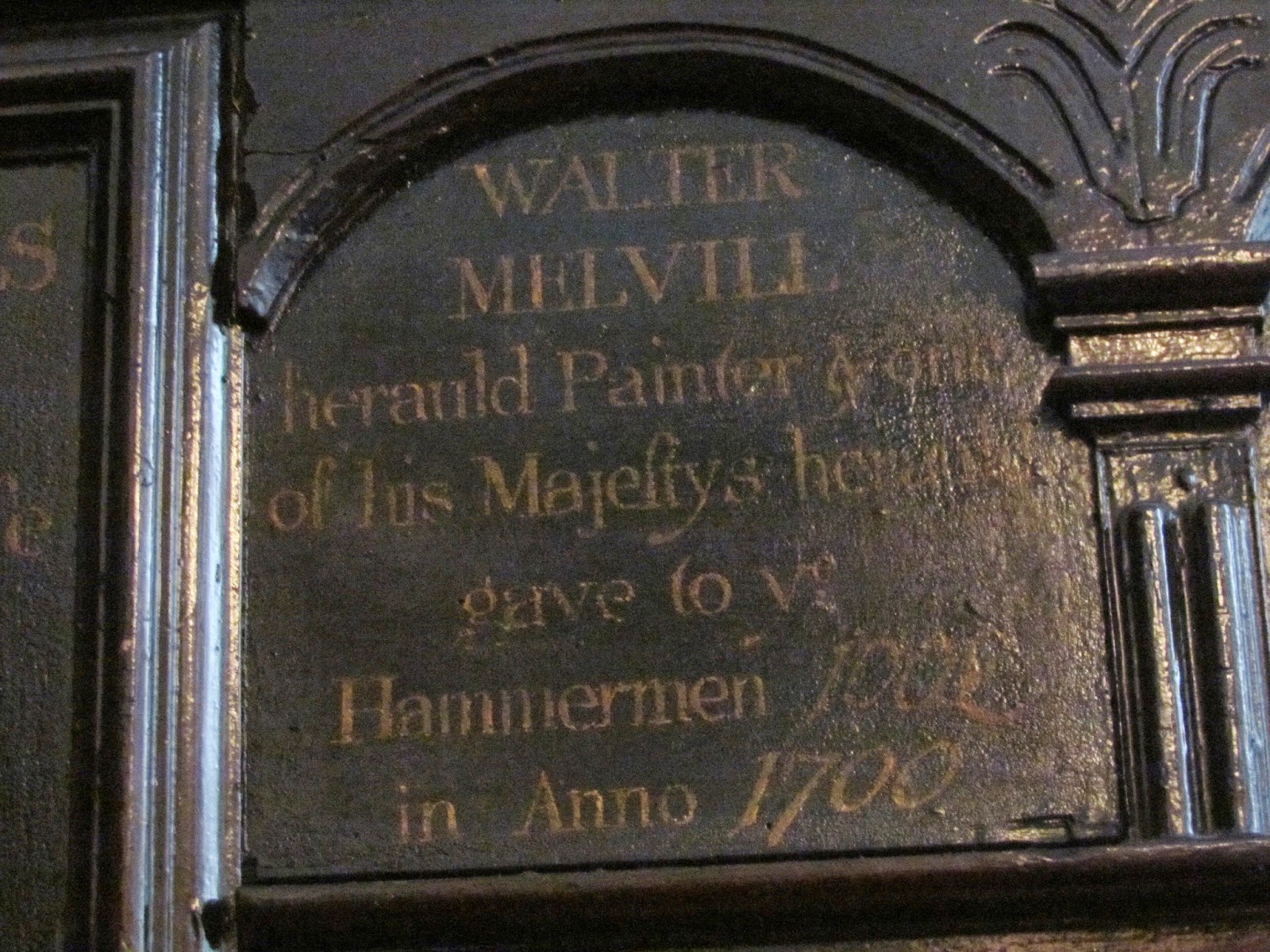 Donations were made in Scottish pounds, pounds sterling and even Portuguese ducats. Walter Melville, the King's Herald Painter, who was responsible for painting many of the insignia in the chapel, gave a donation of £100 in 1700.

Not all the artefacts in the Magdalen Chapel are quite so striking. Underneath the window, stands an unassuming table, on which the bodies of Covenanters who had been executed a few yards away in the Grassmarket were laid out and prepared for burial, including that of the Earl of Argyle. For, over the years, the Magdalen Chapel has had quite a varied history. It was originally named after the church of the demolished Franciscan friary behind it, and endowed as a chapel in which prayers were required to be said according to the traditional Catholic rites. During the Reformation in the 1560s, it went through a difficult time as its Foundation committed it to the practising of those rites. However, eventually, it adopted Reformed practice. By the 1760s it had become a Baptist chapel and printing press, and then later, a centre for the Protestant faith. It is currently owned and run by the Scottish Reformation Society. It is still used for meetings and occasional services, including for some of the surviving guilds.

So, next time you sweep through the Cowgate, try to imagine what it must have been like five hundred years ago. Think of the noise of the lowing cows, the tradesmen calling the names of their wares and the ringing of hammer on anvil. But there, right in the middle of the mayhem, would have been a small gem of peace and tranquillity, the Magdalen Chapel. Perhaps you will discover it too one day .


The Magdalen Chapel is open on Tuesday, Thursday and Friday mornings. The Scottish Reformation Society has written an interesting leaflet which I have used as source for much of the information in this post.

If you have found this post interesting, you may also like to read this post: Greyfriars Kirk, asserting Scotland's religious and political independence.
Posted by Elisabeth Ritchie at 23:21