Our walk from Blackness to Abercorn started in wind and rain and finished in sunshine: just a normal Scottish day. The weather could have been the other way round, of course, but arranged like this, things could only get better, and so they did. We walked from the ruins of centuries-old conflict to ancient memorials of the lives of ordinary people, from castle to churchyard.

We started our walk where the great ship of Blackness Castle looms over the Firth of Forth, guarding the passage to the Royal Castle of Linlithgow, just as it had done for centuries. 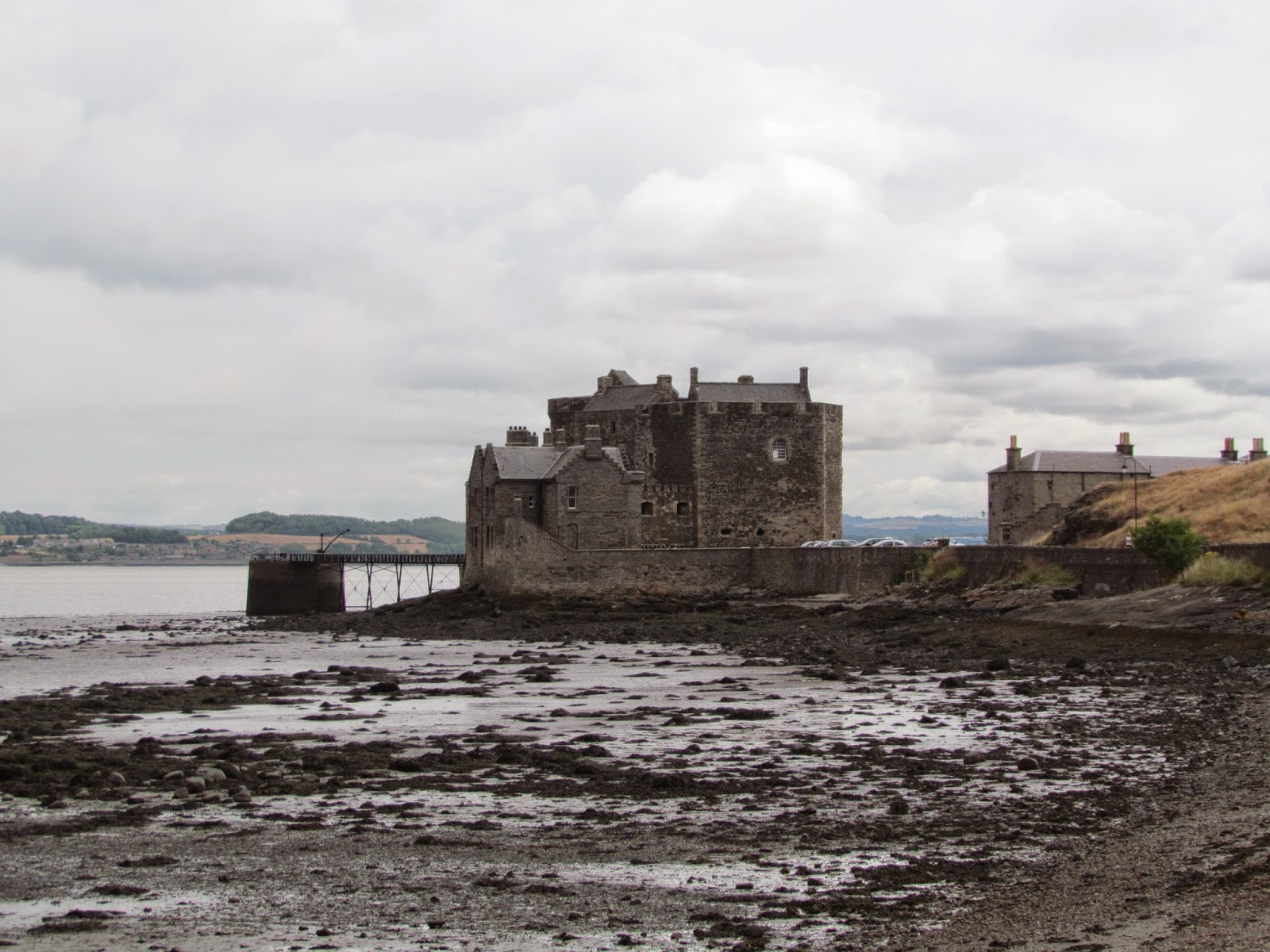 Having already visited the castle (see the post Blackness Castle, guarding the Firth of Forth), we turned off to the right. After climbing a mound we passed the ruined chapel, smashed to bits by Cromwell's guns in the 1650s. Not that he was aiming for the chapel, of course. His target was the guns the defenders of Blackness Castle had cannily positioned on the same site. 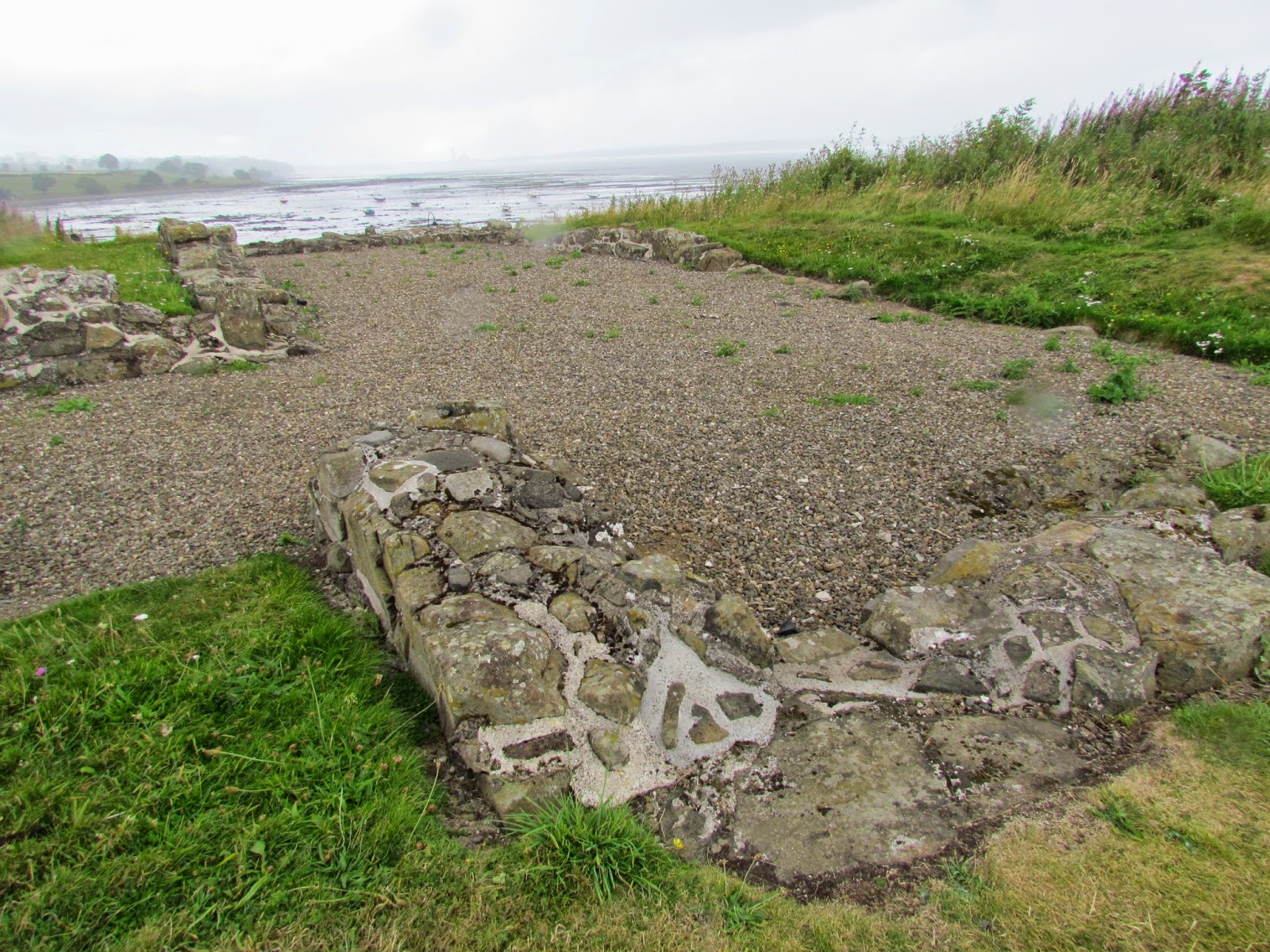 Looking back, we could see the hazy outlines of Blackness village and harbour. 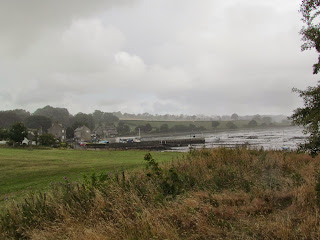 Ignoring the drips running down our necks, we trudged on past the ruined dovecote, which once provided precious fresh meat to the castle's inhabitants. It had also been  knocked about a bit by Cromwell's armies when they laid siege to the castle. 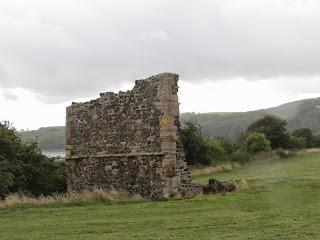 In the distance, across the mudflats left at low tide, we could just make out the two bridges over the Forth, rail and road, emblems of a later industrial age. 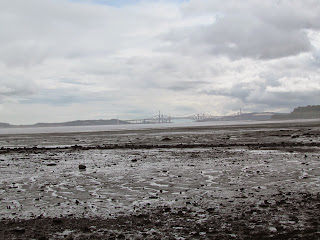 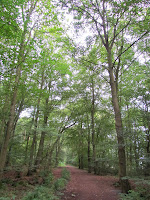 However, we left the coastline and turned into the woods. Light began to dapple the leaves as the rain clouds moved away. 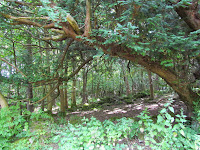 Over the Firth, blue sky started to appear. The air became lighter. 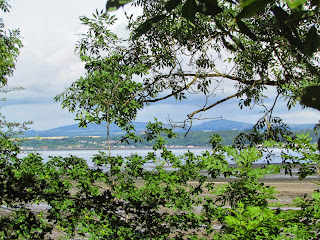 The thick stone walls of Blackness Castle shone across the bay. 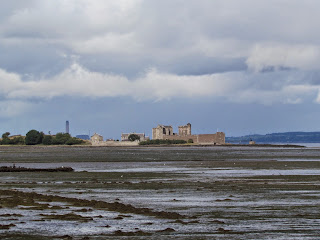 By the time we reached the hamlet of Abercorn, the sun was well and truly out.

This small farming community, once protected and dominated by the family of the 'Black' Douglas, owners of Abercorn Castle, now has fewer inhabitants than it did in the Middle Ages. The siege and then demolition of the castle by James II in 1455, destroyed the power of the Douglas family in this area. The castle was never rebuilt and there was hence no need for the hundreds of cooks, guards and servants which would once have made this a bustling settlement and market place.

Now, the centre of life is the parish church, not the laird's fortress, and so it has been for centuries now. Here generations of people have marked significant events in their lives: birth, marriage and death. Philip Larkin wrote about such a church decades ago, in Churchgoing.

...yet tending to this cross of ground
Through suburb scrub because it had unspilt
So long and equably what since is found
Only in separation - marriage, and birth,
And death, and thoughts of these - for which was built
This special shell? 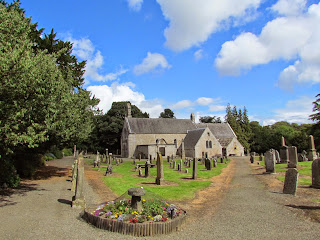 Abercorn Parish Church has an ancient history. In the seventh century, a Pictish monastery used to stand on this site, established by monks from Lindisfarne. Originally a bishopric within the Celtic tradition of St Columba, Abercorn was soon overwhelmed by the growing dominance of the Roman Catholic church and lost its bishop.

However, remnants of its early ecclesiastical status still survive, as well as of some of its first parishioners. Enter the old Session House at the entrance to the right of the churchyard and you will find some wonderful, intricately carved memorials. 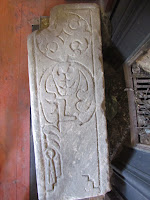 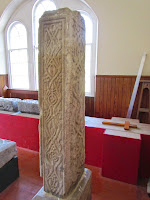 These precious fragments of the past include what is left of two ancient crosses, one of which, dating back to the eight century, would once have been 14 feet high. Magnificent grave slabs lie alongside. 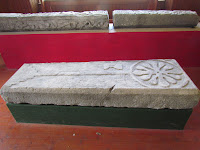 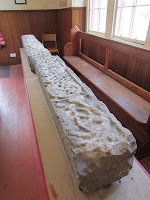 Just as impressive are two Viking hog-backed burial stones dating back to the 12th century. Who once lay beneath these, I wonder? 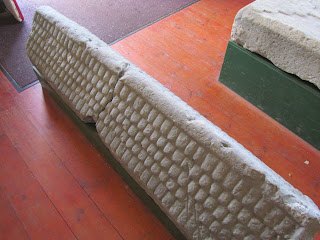 So much for the ancient anonymous dead, now long forgotten. What about the church itself? 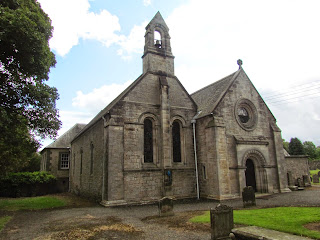 The original building dates back to the 11th century, though in the 16th century it was altered to meet the requirements for worship in the reformed tradition. In the 17th century and early 18th century it was further modified by the three great local families: Dundas, Dalyell of The Binns and Hope (of Hopetoun House nearby). Each laird built an aisle as burial place for family members. Here is the lovely barrel-vaulted roof of the Dalyell aisle to the south, with a family gallery at the end. 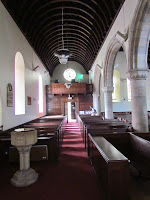 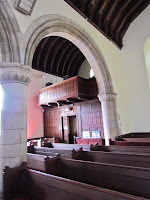 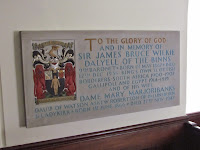 The military prowess of the Dalyells over generations is commemorated on their memorials. 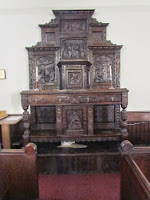 A magnificent Jacobean cabinet stands here, dated 1631, perhaps once a centrepiece of a laird's reception chamber.
At the end of what is now the main aisle, sits the splendid Laird's Loft built for the Earl of Hopetoun, behind the very communion table itself. 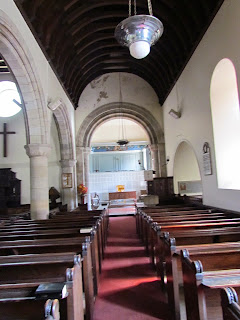 To the present day visitor, unfamiliar with the mindset of the 17th century aristocracy, it might seem arrogant for an earl to assign to his personal seating arrangements such importance that they become - inadvertently or not - the focal point of a place of worship, dominating even the communion table. However, I suppose we must consider the standpoint of the early Presbyterians, who did not ascribe to this simple table the sacramental significance which it would have had for a Catholic or Episcopalian congregation.

However, there is no doubting the message the Loft imparts about the pride and power of the local nobility. The family's gilded coat of arms is a potent representation of their influence. It is not just positioned on the back wall of the loft; it actually occupies the wall of the East end itself, the 'holy end', as Philip Larkin would put it. Just imagine the earl and his family looking down at the congregation. You wouldn't dare to fidget, would you, or miss a Sunday's churchgoing! 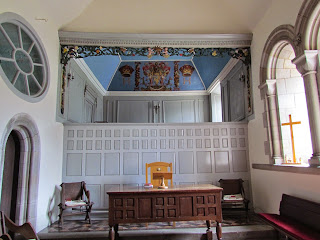 However, it is not the grandiose pretensions of the nobility which draw visitors to this lovely simple little church. Far from it. The graveyard of Abercorn Parish Church has been, and still is, the final resting place for many ordinary people: merchants, farmers and seamen. They have left their messages and the marks of their professions or trades on some striking, yet still modest, tombstones. 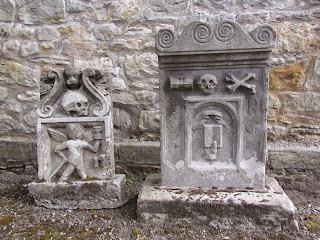 Skulls with or without crossbones remind us all of the inevitability of our own deaths: momenti mori. Grotesque heads leer at you, smiling triumphantly. These symbols of mortality are everywhere around you as you wander through the churchyard. 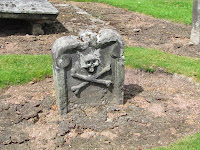 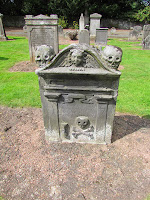 Here are the emblems of the blacksmith's craft: hammer and anvil. Here lies a labourer with spade and rake. 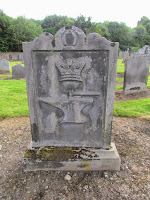 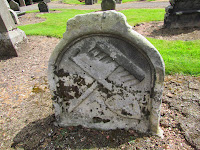 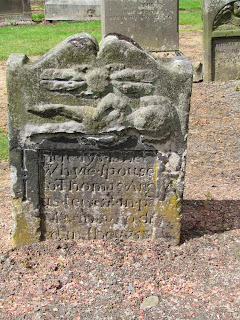 Simple local carvings mark the graves of the people who worked the land which the the nobles owned. Some of the depictions look quite naive to our sophisticated eyes. In the photo to the right, you may be able to make out the holy spirit hovering above the body of the recently deceased.

This graveyard, set in the quiet green surroundings of a small rural community and psychologically if not physically, remote from the great affairs of state which, just a few miles away, threatened the survival of monarchs, aristocrats and gentry, has, perhaps, the power to move the visitor in a way more grandiose monuments do not. I acknowledge that the church building itself does indeed commemorate the lives of the great 17th and 18th century families: Dundas, Dalyell and Hope. Yet, here in the tranquil graveyard surrounding it lie the remains of generations of workers and craftsmen, on whose labour and loyalty the castles and great houses which dominate the shores of the Firth of Forth depended.

Few places have brought to my mind quite so vividly Philip Larkin's moving poem Churchgoing, though perhaps we need to substitute Presbyterian lairds' lofts for the poet's Anglican rood lofts; However, the underlying sentiment remains.  It does not matter whether one is a believer or not, places like Abercorn retain an atmosphere - even an aura - which does not fit neatly with present-day rationalism.

Indeed, I can only end this post with Larkin's own final stanza. Larkin is aware that the Church is 'going' and that his own 'churchgoing' and that of other amateur historians and antiquarians have little to do with traditional Christian belief, or of what churches are 'really' supposed to be for. Nevertheless, he sees such shared settings as retaining a significance for key events in private and community life which lie beyond the formal tenets of belief.  Places like Abercorn Parish Church and its graveyard will survive far longer than one might think.

A serious house on serious earth it is,
In whose blent air all our compulsions meet,
Are recognised, and robed as destinies,.
And that much never can be desolate,
Since someone will forever be surprising
A hunger in himself to be more serious,
And gravitating with it to this ground,
Which, he once heard, was proper to grow wise in,
If only that so many dead lie around.

Much of the information about Abercorn Parish Church, West Lothian was taken from the excellent illustrated guide produced by the Abercorn History Group. The interpretation is my own.
Posted by Elisabeth Ritchie at 21:35