I didn't quite know what to expect of Machrie Moor on Arran's western coast. The tourist brochure confidently asserted that it was 'the site of Arran's most impressive stone circles'. Everything is relative, however. Although a quick scan of the Ordance Survey Map showed an island littered with hut circles, cairns and standing stones, we hadn't seen much evidence of these as we drove its roads. Was Machrie Moor another Callanish or Ring of Brodgar? Or would it be just a few sad remnants of half-buried stone?

Well, no, Machrie Moor does not have a single stone circle that is as impressive as those at Callanish on Lewis, or Brodgar on Orkney. However, neither have its interest for, or impact on its visitors been exaggerated.

The stones on Machrie Moor represent something quite distinctive. Set on the wide panorama of a boggy peat landscape is one stone circle after another, each linked to the other by the trampled squelchy footpaths of curious modern visitors. The sheer scale of this sacred site is quite stunning, though each set of stones viewed on its own may not be.

Admittedly, one's first sight of these prehistoric monuments is not particularly impressive. A couple of hundred yards from the car park is the Moss Farm cairn, the burial place of a notable local leader who lived in the area four thousand years ago. 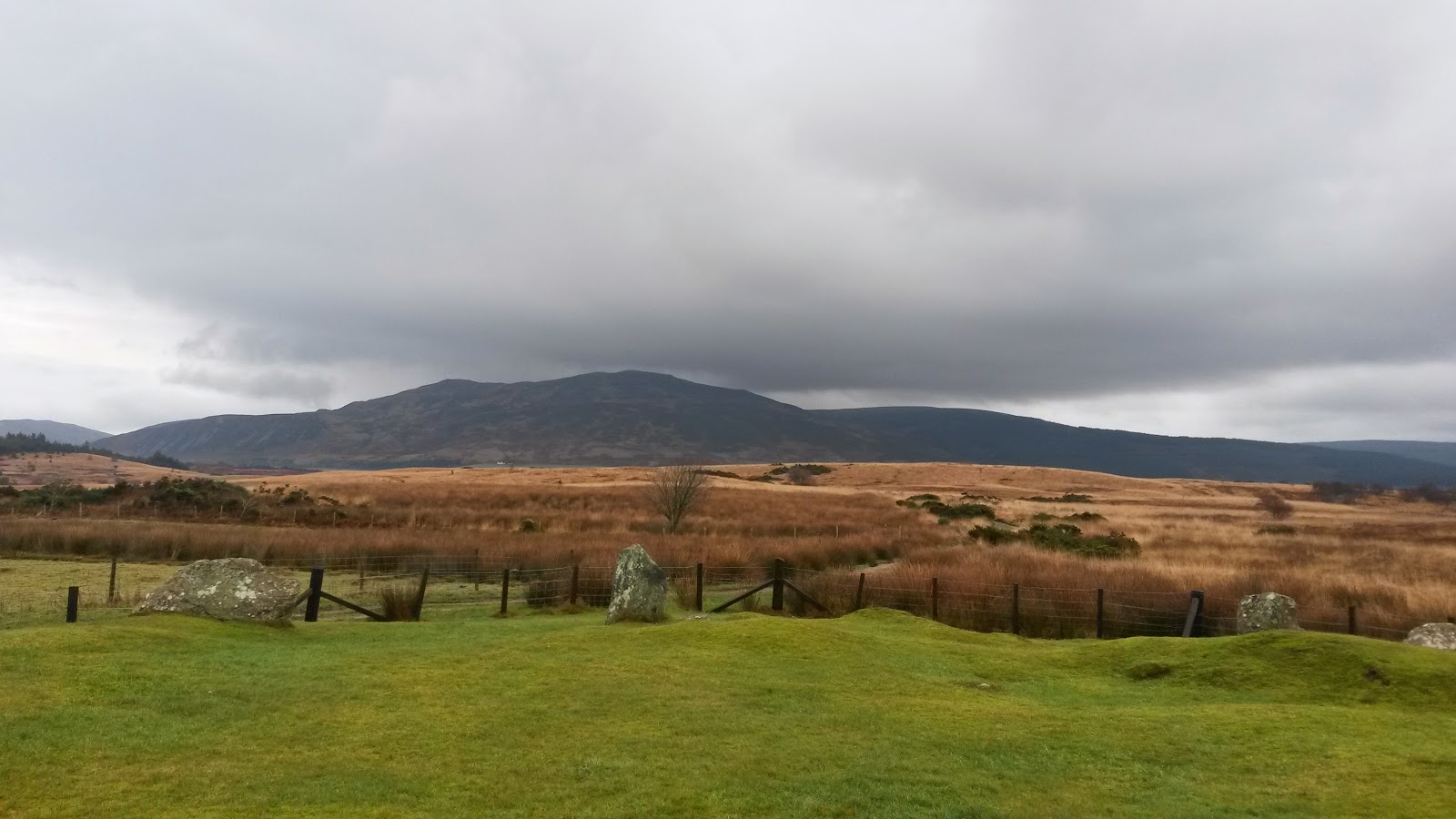 In the photograph above you can may just be able to make out three of the Moss Farm cairn's remaining eight or ten low stones. The others were removed long ago for use as building materials by the people who replaced the original ancient community, as were the outer circle of standing stones. So much, so modest.

And if you are Stuart, you stop there, thinking, well, if that's all Machrie Moor has to offer, it isn't very impressive. However, continue and your persistance will be rewarded. Follow me along the track, through the green fields of sheep towards the brown of the bog. 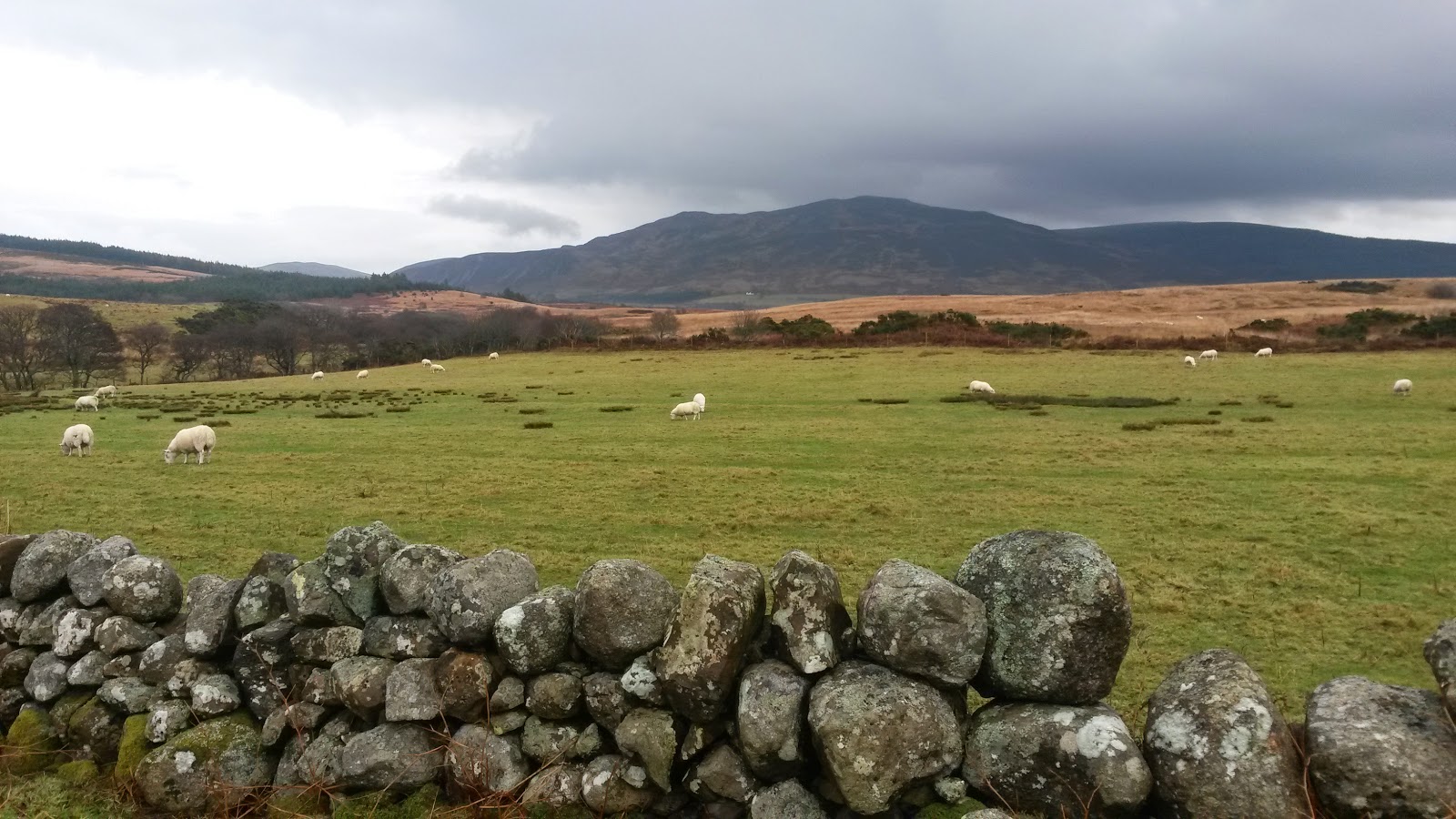 In the distance, the dark clouds threaten 'wintry showers', or worse. But keep going and, in time, signs of the ancient inhabitants will start emerging. 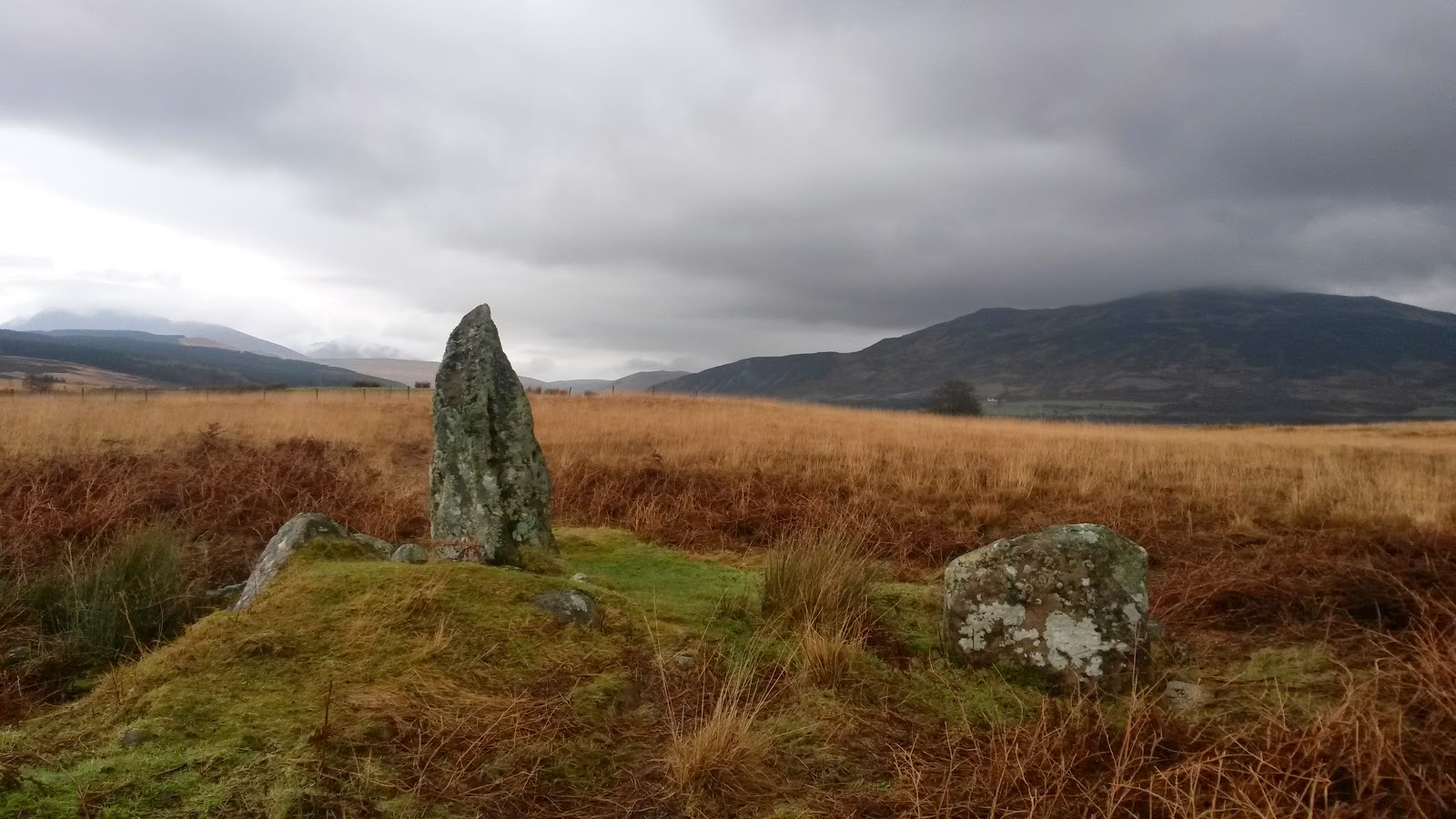 Climb the stile on the right and follow what looks like a sheep track and there are the remains of a modest cairn. On the left, in the distance stands a single monolith. 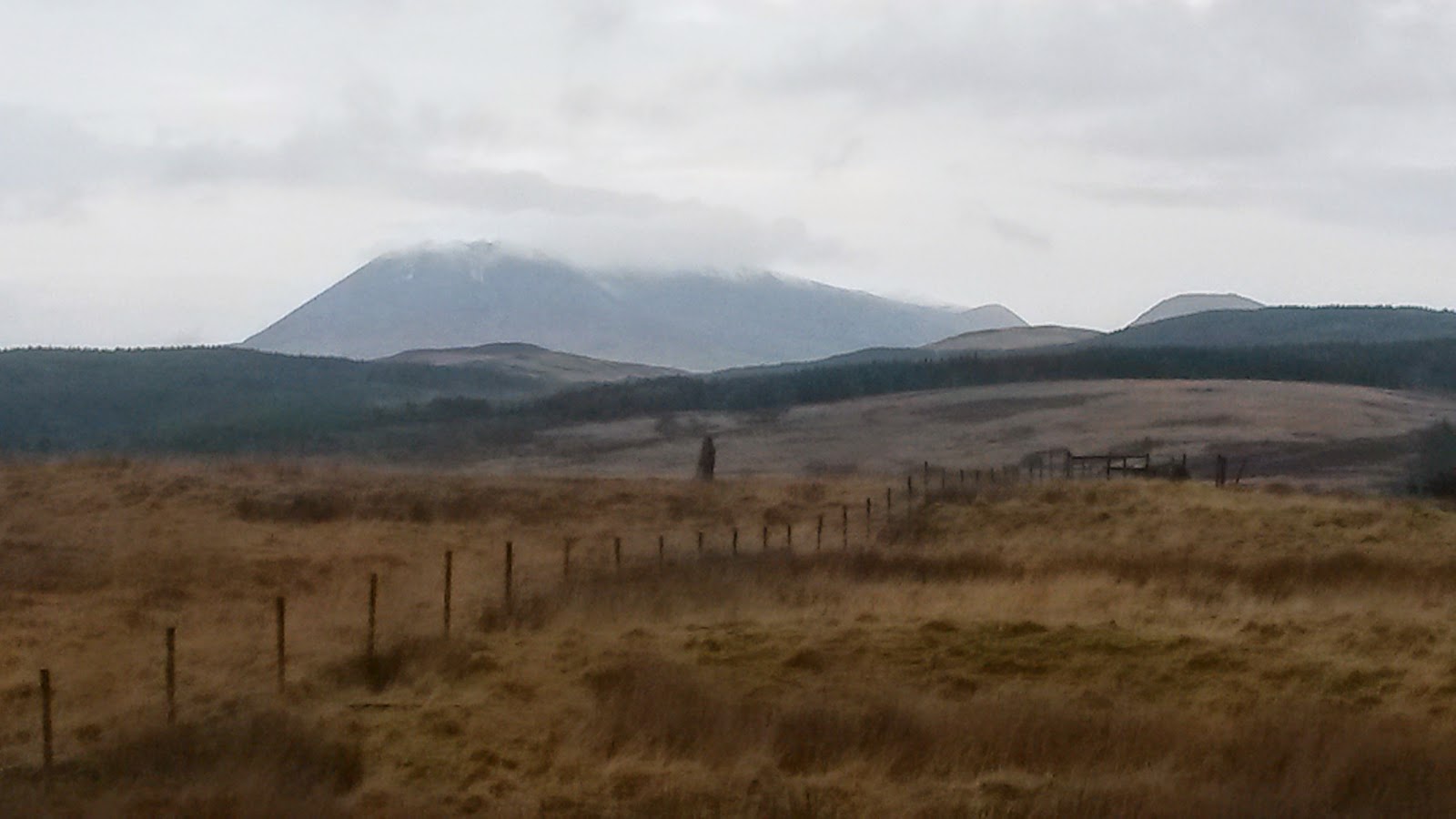 On the right, next to the track are two walls of a chambered cairn. 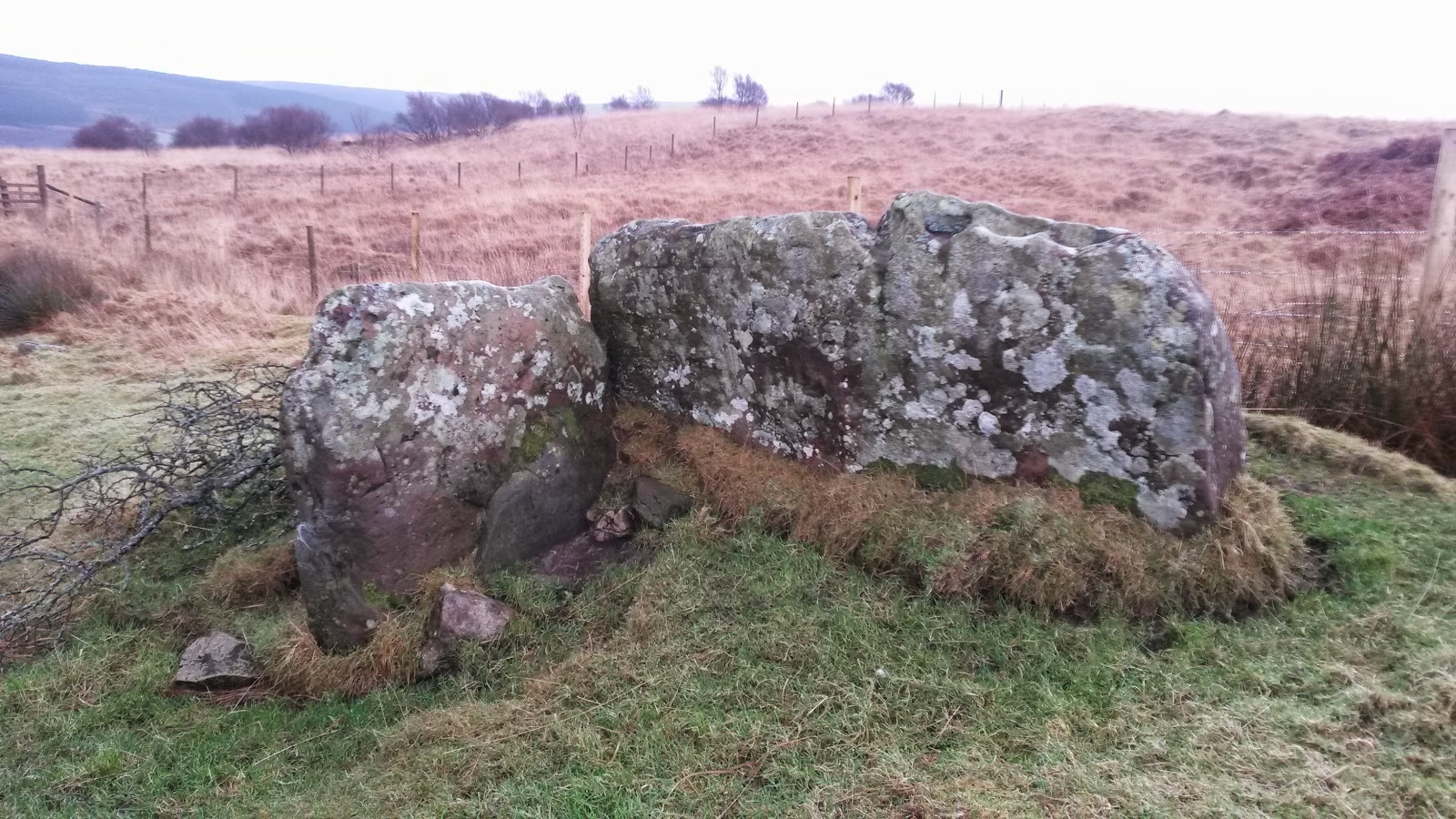 However, the main circles are ahead of you, so keep going. 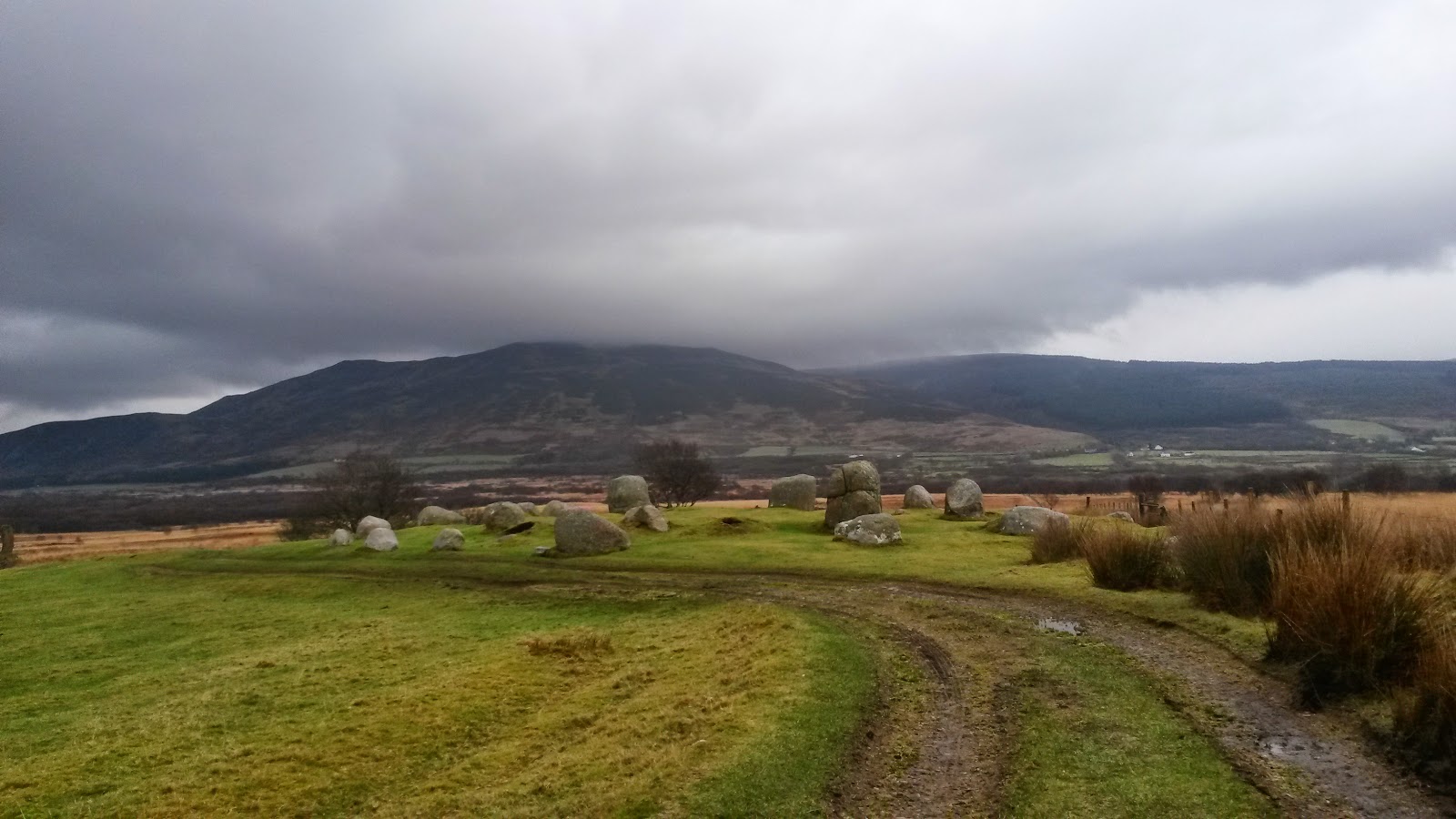 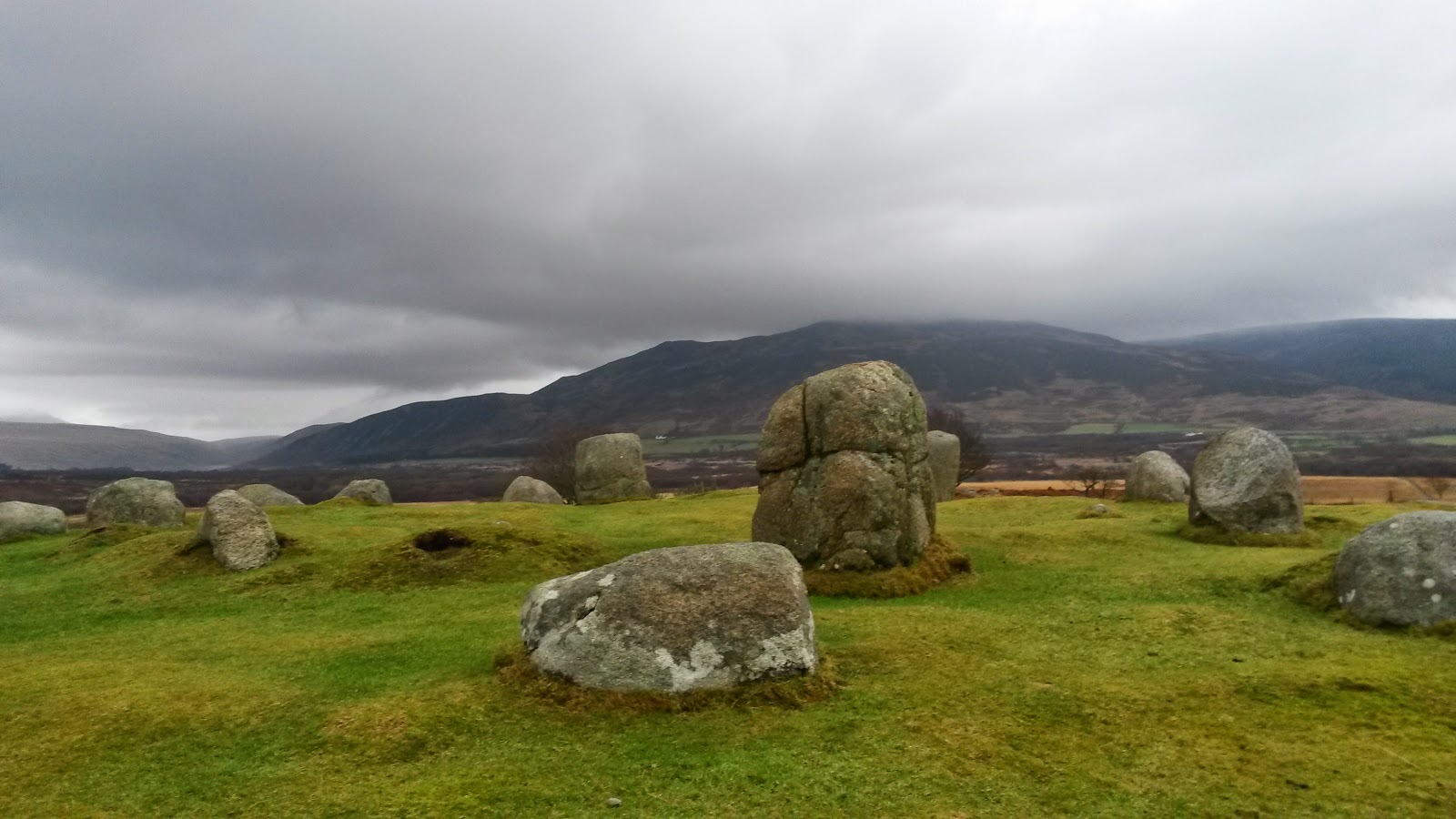 Soon you see one circle of stones after another laid out before you. 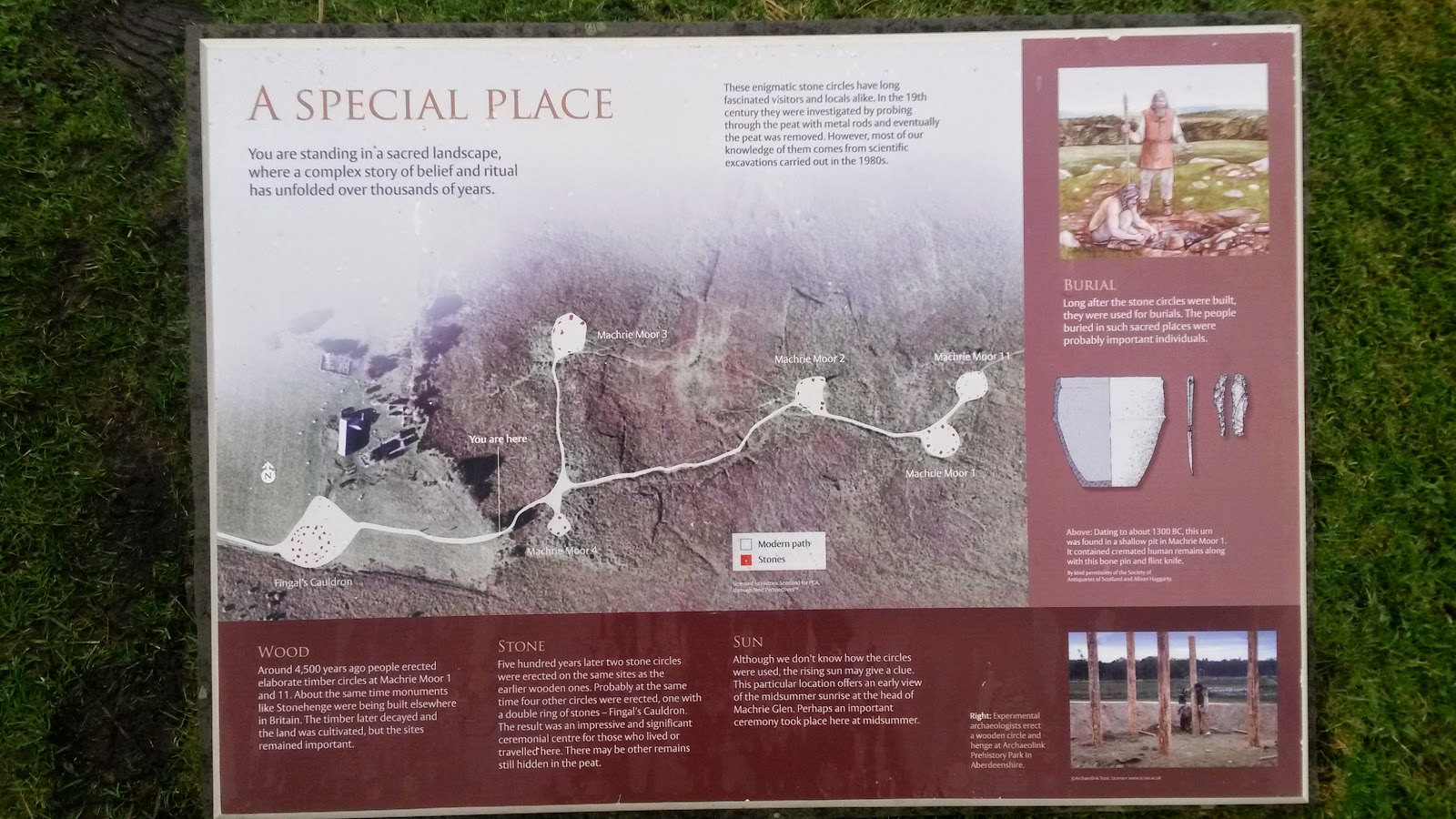 This plain was used for thousands of years. First timber circles for some kind of ceremonial use were erected and then, hundreds of years later, they were replaced by stone slabs. The area was also farmed and generation after generation lived among the monuments, perhaps forgetting their original purpose but recognising that this was a special place, dare I say, a numinous place. Later on, local communities reused the sites to bury their own family members. Year after year, decade after decade, century after century, millenium after millenium, Machrie Moor remained a holy site.

The individual locations, as I said before, may not be astounding, but the overall impression of the site as a whole is.

You walk on, the mud sucking at your boots.

Here the grey granite boulders are rounded and smooth. There the red sandstone markers are rough and high.

And why are they placed here, these stones in the middle of a empty godforasken plain?

Well, not so empty in those days, of course. Nevertheless, there seems to have been a reason. If you look at the stones below you see that they appear within the 'v' shape where the hills dip towards each other. Apparently, this intersection is also where the midsummer sun appears, or so it is said.

Looking at the three stones from the other side, you can see the stumps of their missing companions.

In between some of the stones are - seriously - what look like fairy rings.

Either that, or a form of herbal leprosy.

Time to return to the car park, however, as the sky turns black and the 'wintry showers' become tangible.

On the way back, I passed the derelict nineteenth century farmhouse, built four thousand years after the very first structures on this site.

And was Machrie Moor worth a visit?

On this site, generation after generation of people lived, growing their food, raising their children, burying their aged parents - much the same as us, in fact.

So, do visit Machrie Moor. It's worth it.

Posted by Elisabeth Ritchie at 21:54