Exploring the east coast of Arran

Generations of families have spent their holidays on the Isle of Arran over the years.

What do they come for?

Well, if you are a Ritchie by birth you come for beachside holidays and to play golf on one of the island's many courses. Others spend their time out on the hills, walking and climbing, and these days the range of possible activities is even wider. However, we were visiting during winter so we spent our time exploring the island by car.  A couple of hours is all it takes to drive around it. So, that is exactly what this post is about, though there is so much to see that we are spreading our journey over two posts and taking the east and west sides of the island separately. 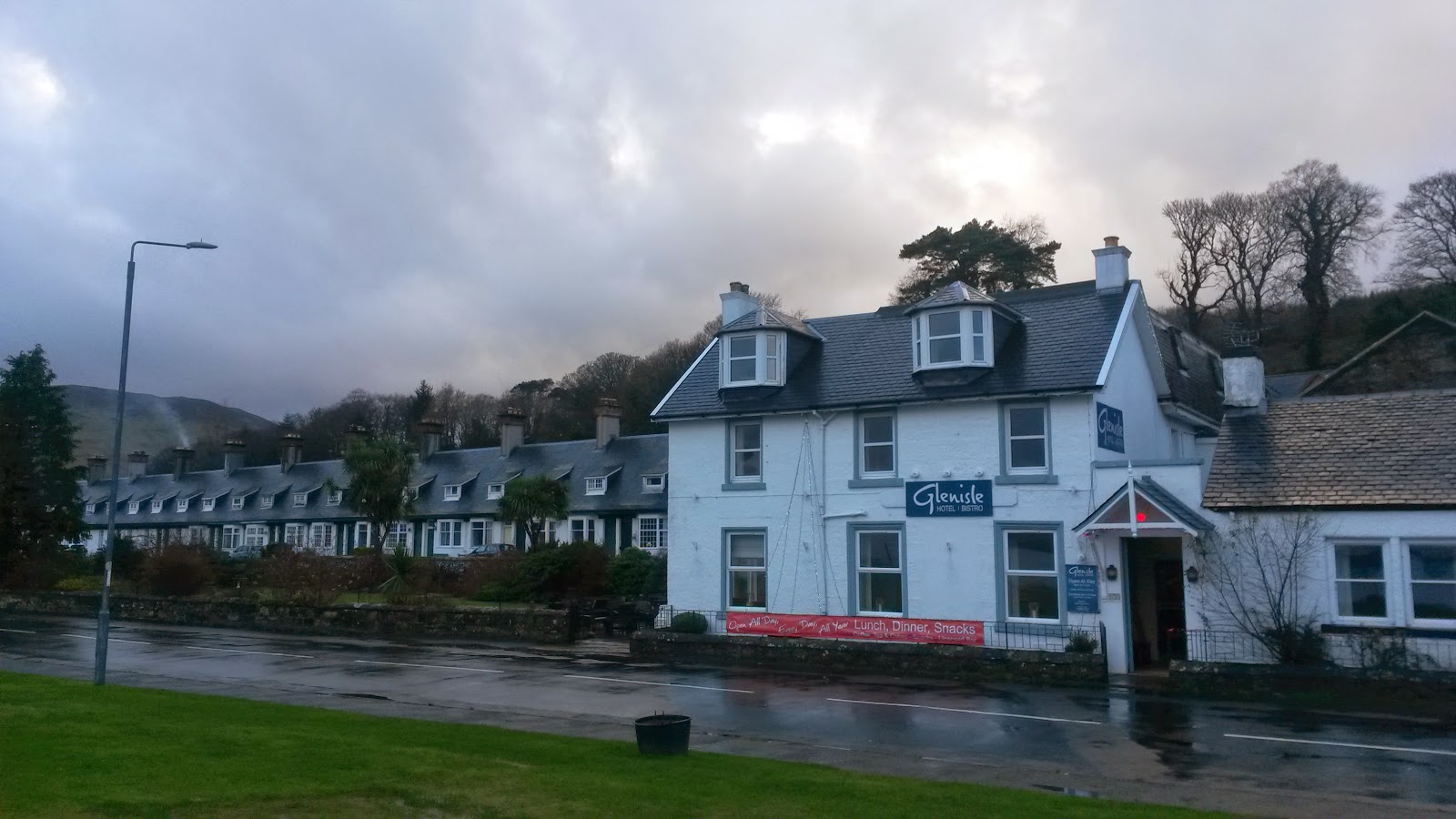 We will start our trip at Lamlash, a third of the way up the eastern coast of the island and looking across to the Firth of Clyde. We will return to Kildonan, south of Lamlash, at the end of this post. Lamlash is where we were staying, in the excellent Glenisle Hotel. This comfortable privately owned small hotel serves delicious locally produced food.

If you stand outside the hotel, you get a wonderful view of the Firth of Clyde and Holy Isle, an island dedicated to world peace and visited by people of all faiths and none. Indeed, there is even a Buddhist monastery on Holy Isle.  We saw Holy Isle in all weathers and at all times of day. Here it is shortly after sunrise on Christmas Day - around ten o'clock. 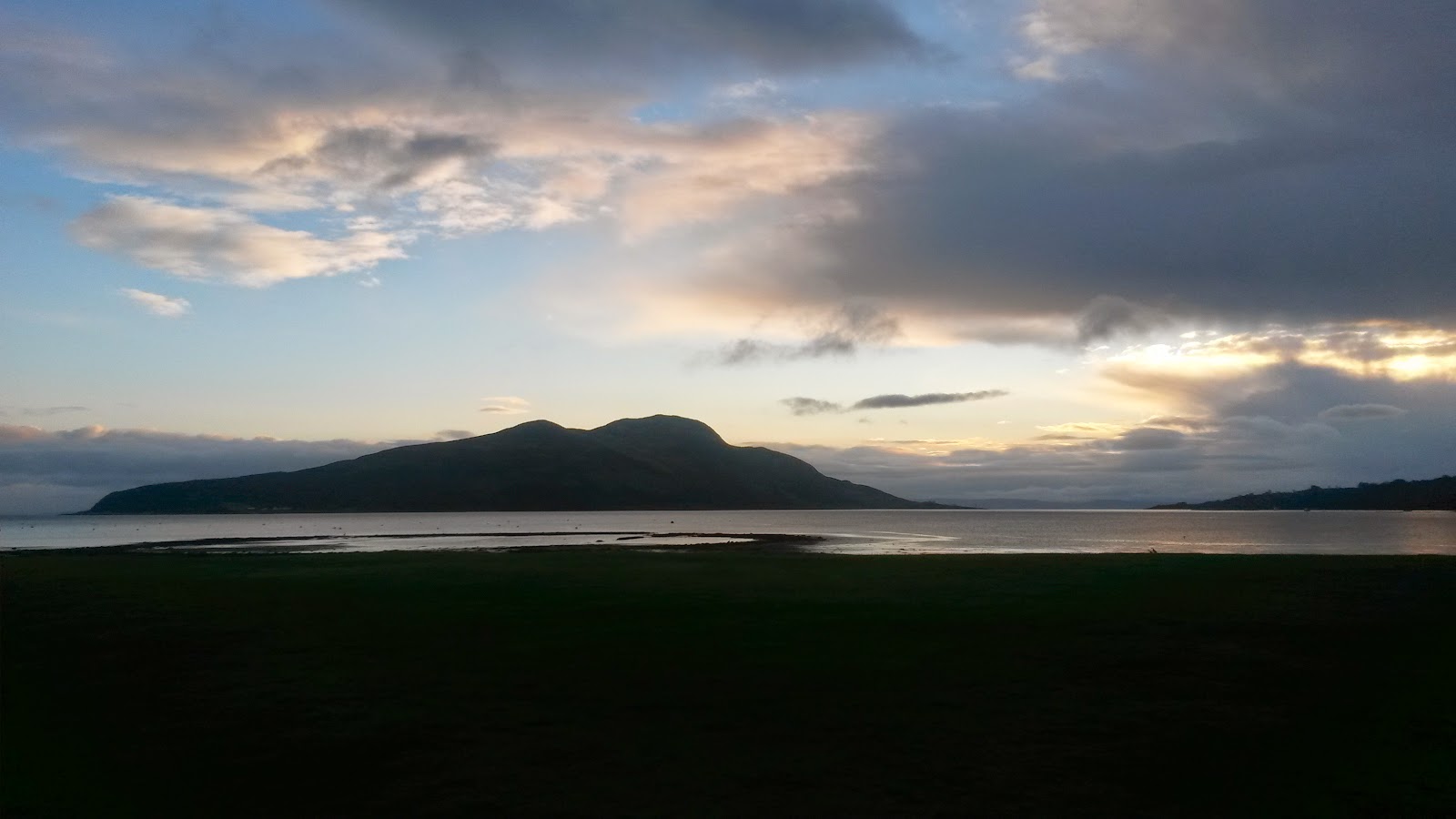 And below is how it appears is a few hours later. You can catch a ferry across to Holy Isle from Lochranza, further north. We didn't have time to do this, so it's a treat for next time. Apparently there are inscriptions in some of the caves which go back to Viking times. It was on Holy Isle that the Celtic hermit St Molaise lived. Over the centuries, his name was taken by the village across the Firth. The name Molaise was gradually corrupted and became Lamlash and that is the name by which the village is known these days.. 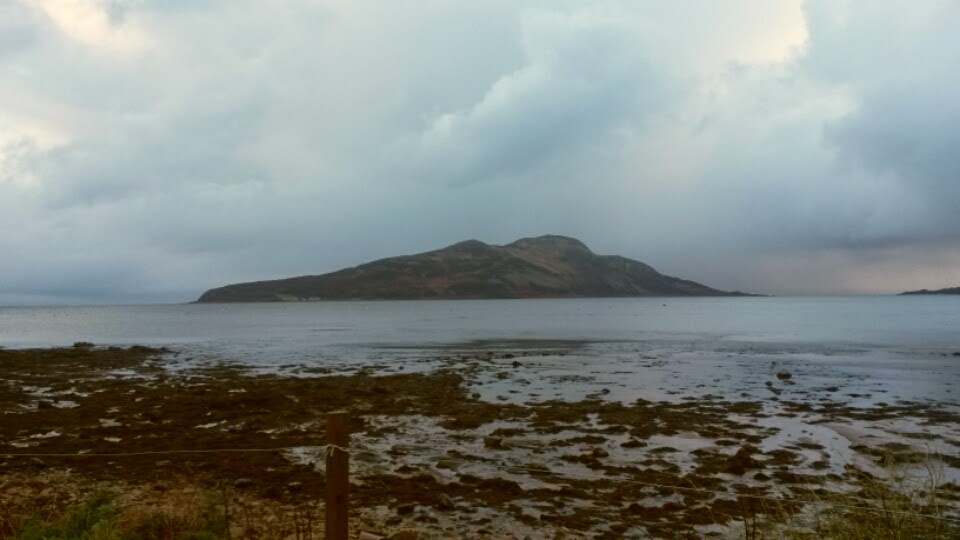 The Celtic church founded several places of worship on Arran. The original church in Lamlash was probably built to avoid the inhabitants having to make the tricky sea crossing to the monastery on Holy Isle for burials. It was replaced in the eighteenth century by a structure in the heart of the village. Interestingly, in front of the church building you can see the ancient cross and font from the old monastery on Holy Isle.

The solid red sandstone structure of the current church, with its impressive tower, was built in the late nineteenth century.  The 13th Duke of Hamilton who owned most of the island, paid for the construction. Before you start thinking what a benevolent family these local aristocrats were, just remember that only sixty years before they had cleared many crofting families from the land in order to introduce 'agricultural improvements' for their own profit. In this they were no different from many of the great landowning families in Scotland, of course. The 10th Duke paid half the fares of 86 of his erstwhile tenants to send them hundreds of miles across the Atlantic Ocean to Canada, promising them land when they arrived. Well, there was some land but nowhere near as much as had been promised.

Those 86 people were not alone in their transatlantic exile. Whole villages were expelled and their houses pulled down. As elsewhere in the Highlands and Islands, the impact of these extreme measures was devastating for the Gaelic language and culture of the island. The quiet glens have not always been quiet.

An impressive memorial to the Clearances now stands where the people gathered to listen to the words of their Minister before embarking on the ship which would take them overseas.

Lamlash has its own little harbour, though it is no longer used for regular ferry services.

For ferry services to the Scottish mainland, these days you have to go a couple of miles north to the slightly smaller village of Brodick, the modest little 'capital' of the island. Modest, but with strong international links, if you are prepared to believe the photograph on the right.

Across the bay looms Goat Fell, the tallest mountain on Arran, here seen topped with snow.

Below the shadow of Goat Fell and close to the water, sits Brodick Castle, the grand seat of the Dukes of Hamilton. Not the family's only home, of course, but this one does quite nicely.

As we drive further north to the villages of Corrie and Sannox, we leave the urban jungle of Brodick behind. The road hugs the coastline, the raised beach indicating the changes in sea level over the millenia.

The traditional cottages have attracted artists for many years, hardly surprising.

Hills hang over the low dwellings. Small inlets and harbours are tucked into the shoreline. The vessels here are mostly small open boats for inland fishing.

The bays swoop in deep half circles, punctuated by headlands.

Corrie has two harbours one at each end of the bay. These were working harbours, used for loading the sandstone rock quarried from nearby hills. Once, the steamers used to stop off at Corrie, the passengers disembarking perhaps with plans to spend some time on the Corrie Golf Course, founded in 1892.

To the left, you may just be able to make out the silhouettes of four sculptures of sheep standing in line, looking ready to jump onto the deck of any passing boat. They are bollards produced for the 1988 Glasgow Garden Festival!

As we hug the shore we cast our eyes eastward, towards the shadowy Ayrshire coast. You can see its grey shadowy outline on the photo below. An expanse of sky arches above the blue-grey Firth.

Eventually we reach Sannox, originally named Sandvik by the Vikings, a reference to its long sandy bay. The Vikings were not the first to live there, though. Up the glen there are the remains of an Iron Age village, as well as tumbledown houses more recent than that.

To the right you can see how the river flows parallel to the sea, leaving a long spit of sand.

Behind us, deep glens burrow between the hillsides, pointing to high hanging corries. The glens are empty of people now but were once the site of pre-Clearance villages and even mineral mines. In 1862, the 11th Duke put an end to that form of employment. His reason? It spoiled the landscape. However, the mine gained a brief lease of life at the outbreak of the First World War, but not for long. Now the glens are quiet again.

We are going to leave the northern end of Arran's east coast now. We retrace our tracks further south, beyond Lamlash, to Kildonan, leaving the mountains behind us in the north.

Out in the Firth we can just make out through the mist and low cloud the extinct volcanic cone of Ailsa Craig.

Nearer to the shore is the low island of Pladda, with its lighthouse.

We drive along the coast, dipping inland every so often. Low hills line the road.

Seals enjoy the shelter of these shores, its waters warmed by the Gulf Stream. We saw their heads bobbing up and gazing around before diving deep below the surface of the waves again.

By the time we reach Kildonan, the sun is out. This is typically Scottish weather: all seasons in one day!


Here is where we turn round. It was Christmas Day, after all. The light was failing and it was time to huddle before the fire at the hotel.

Our next journey will take us down the western coast. So, until then, goodbye.

Posted by Elisabeth Ritchie at 21:47