Exploring the west coast of Arran

We reached the west coast of Arran by driving round the east coast, past Brodick and its castle. You could just as easily have gone the southern route, however. 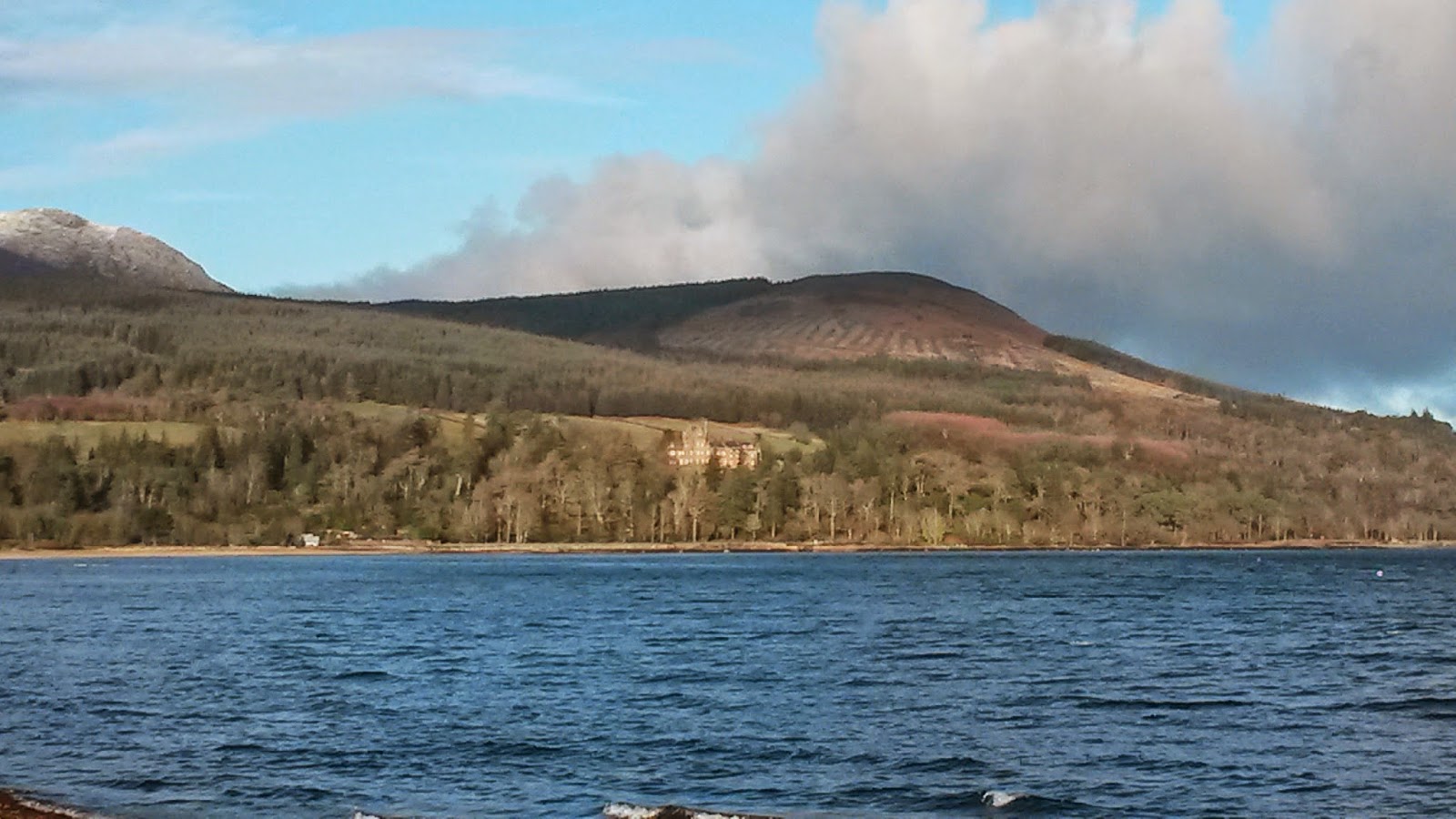 We drove through Corrie, though without being able to resist another photo. 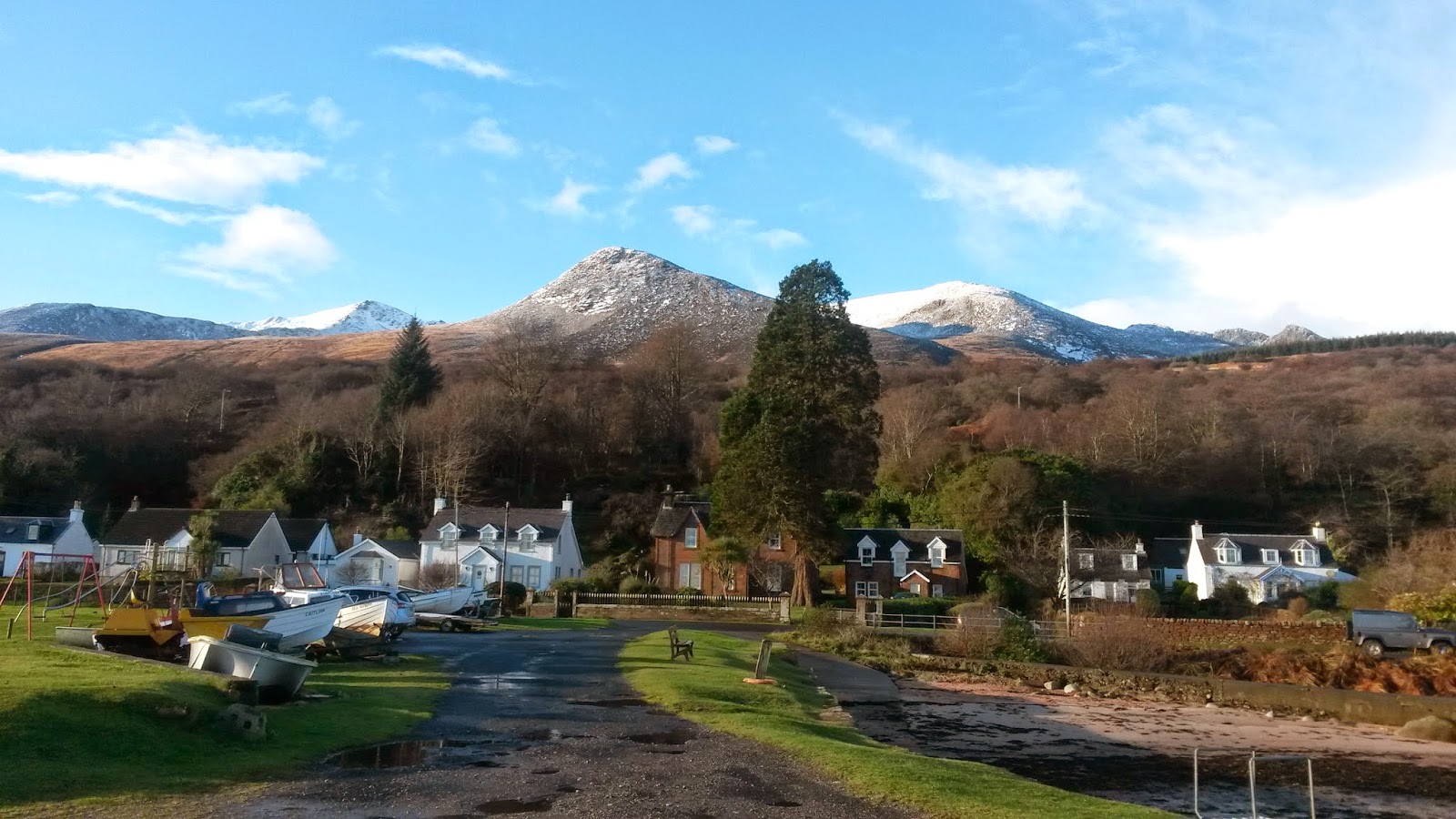 Finally, after Sannox, we cut across the northern tip of the island to Lochranza. As the road starts to descend it follows the line of the bay on which Lochranza is situated. We were now on the west coast of Arran. 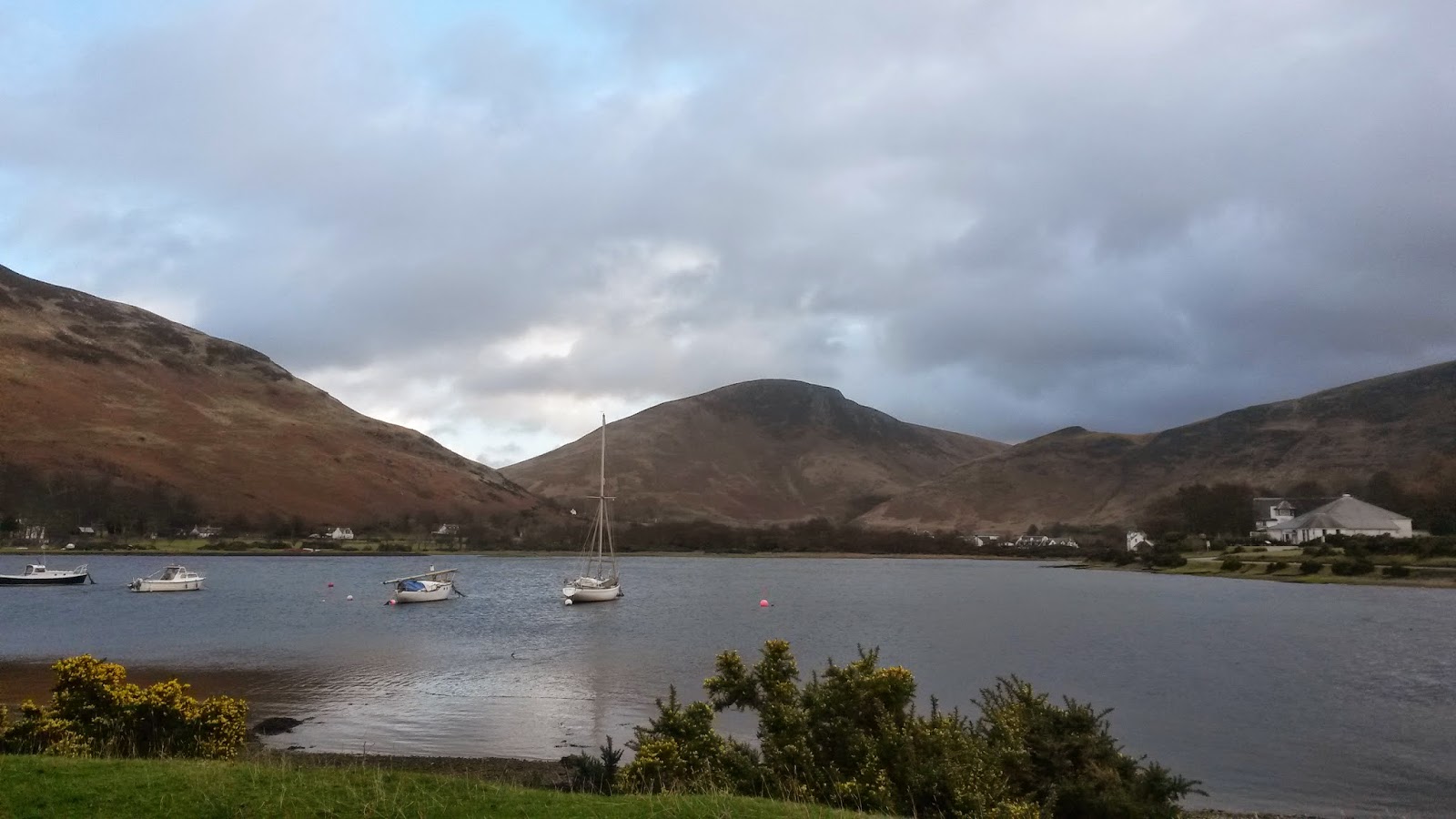 As you drive into Lochranza you come across the distillery. Well worth a visit, but not for us on this trip. 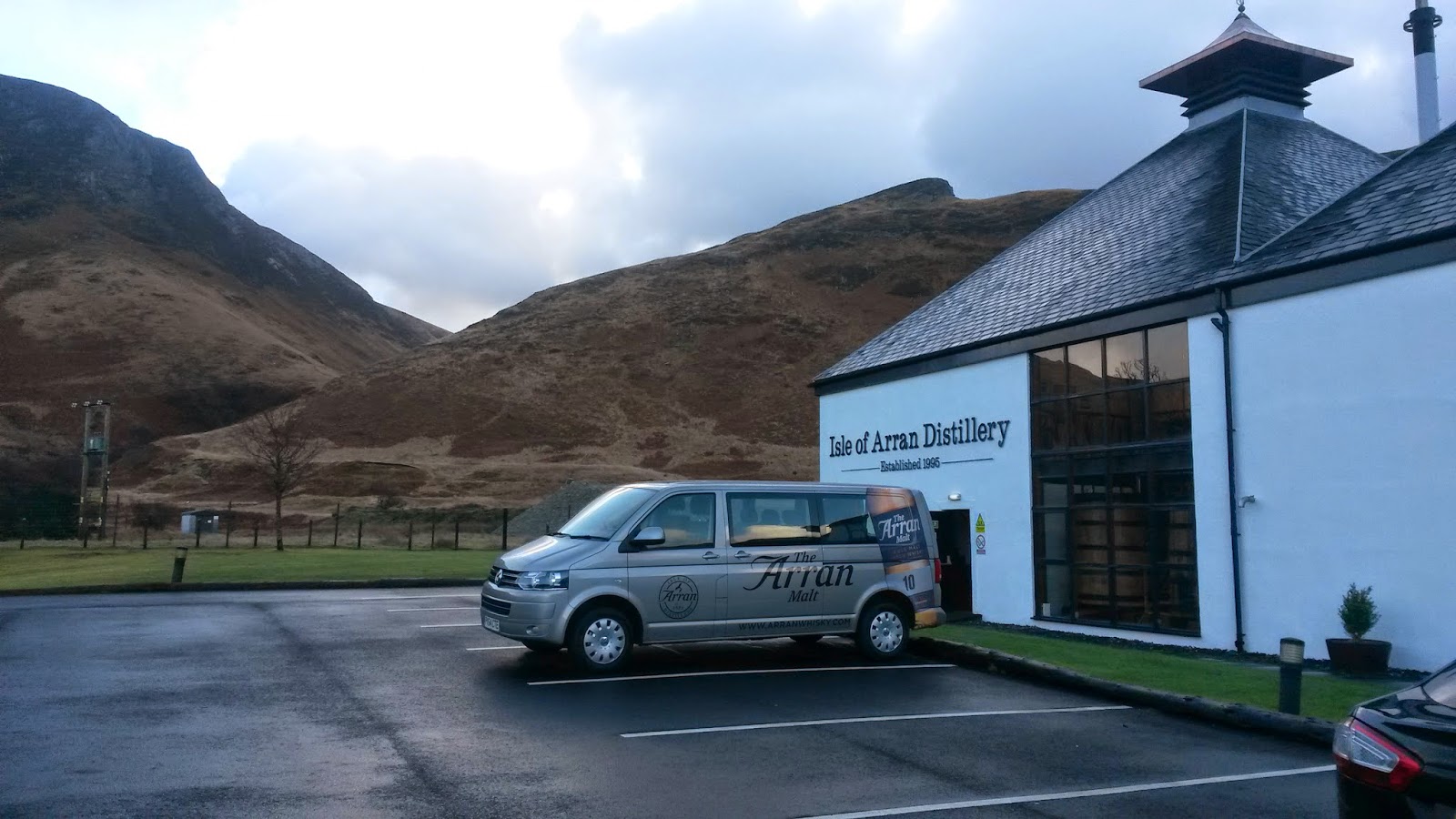 One's first sight of the castle, silhouetted again the surrounding hills, is stunning. 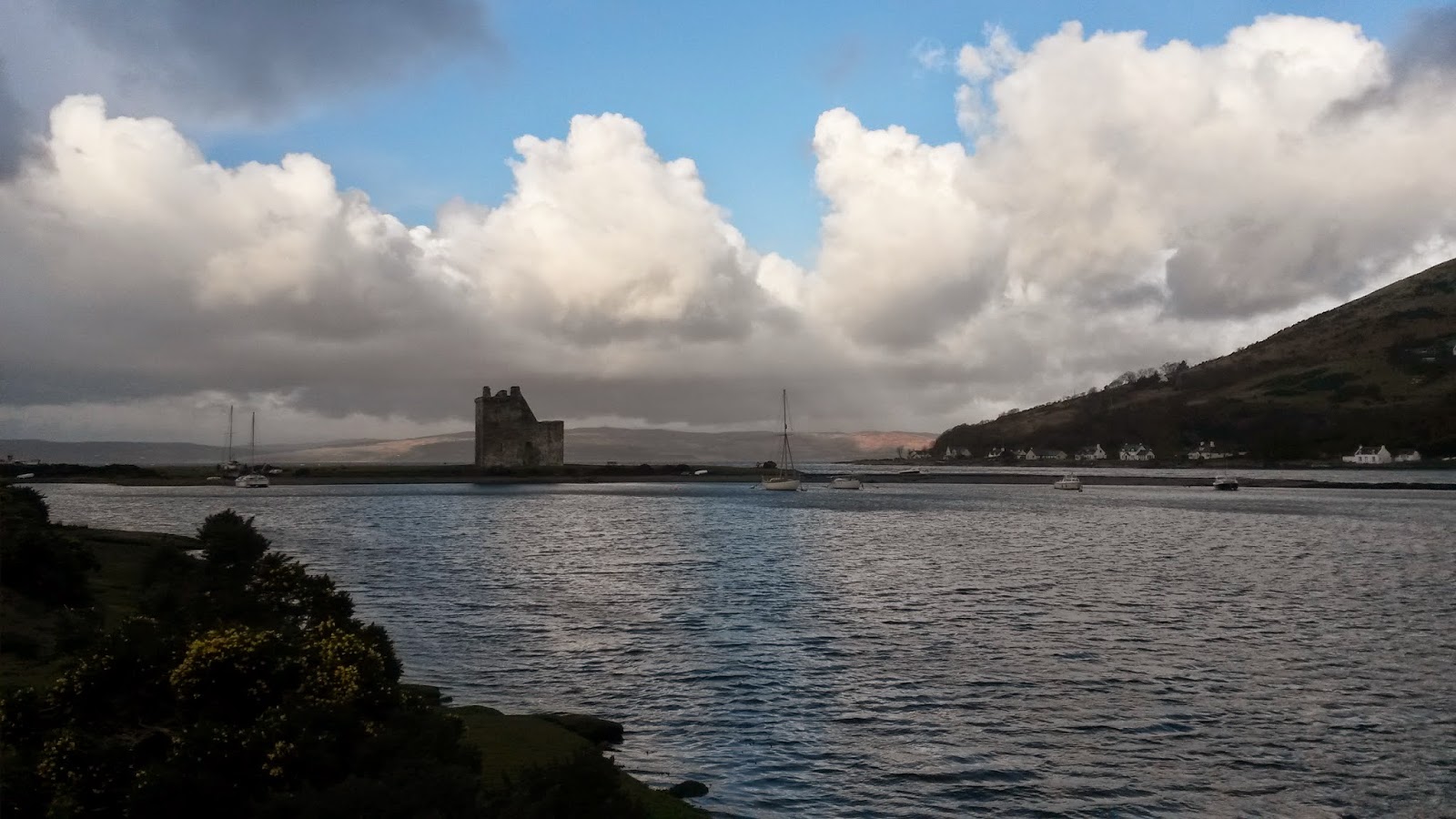 The castle was built in the thirteenth century by the MacSweens, lords of Knapdale, though it passed through various hands over the centuries, including the royal family of Robert Stewart who became king in 1371. 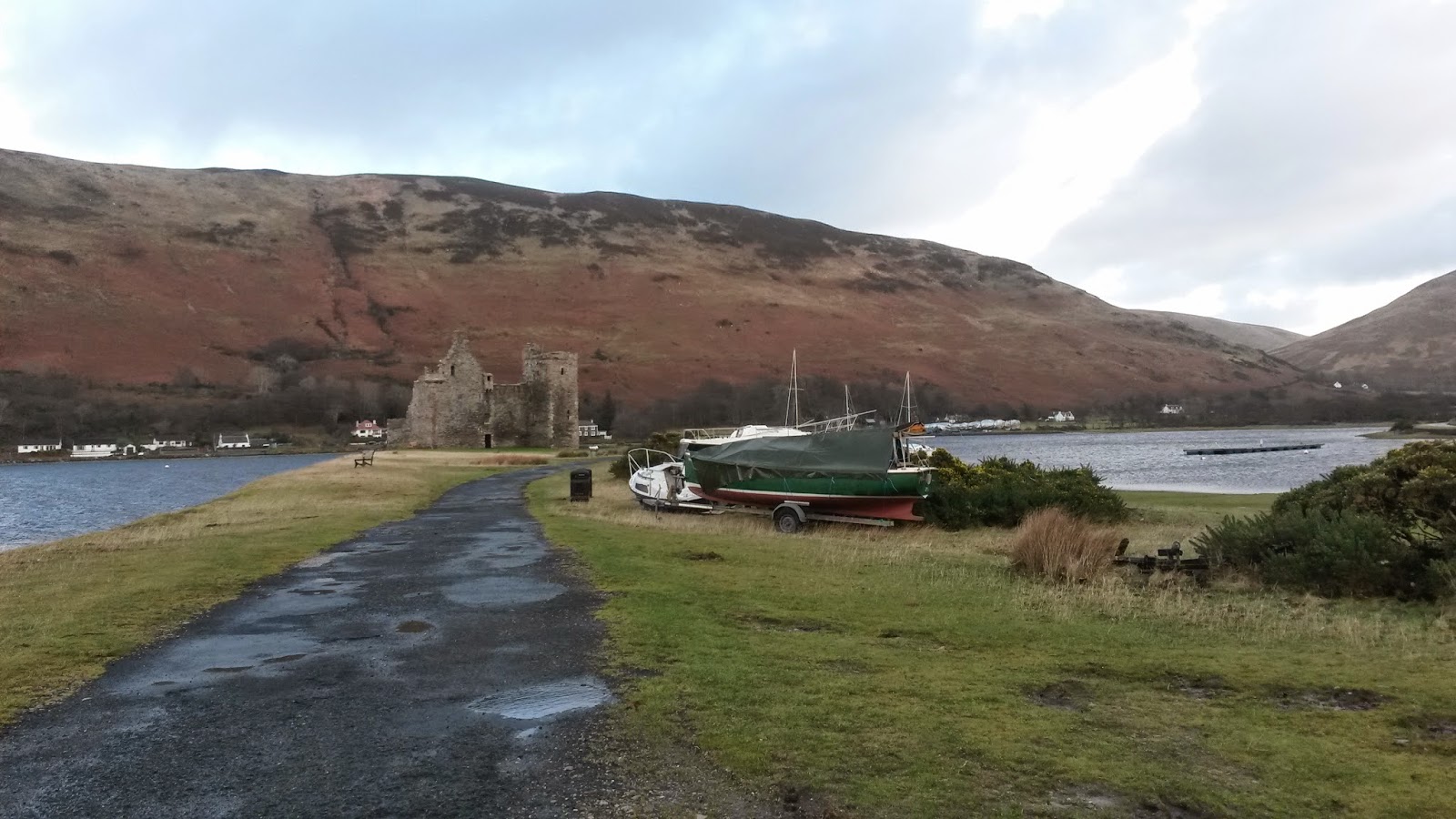 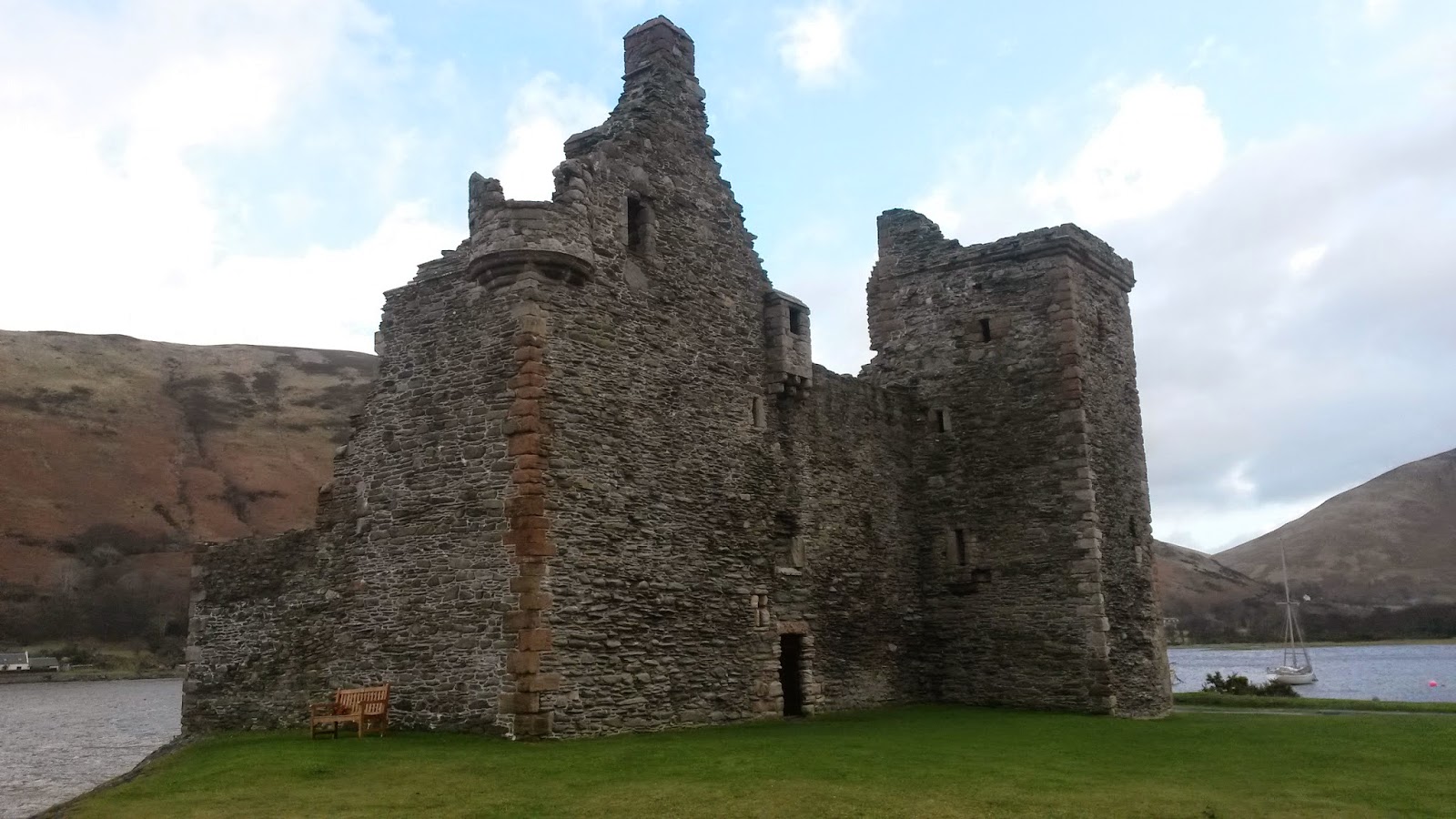 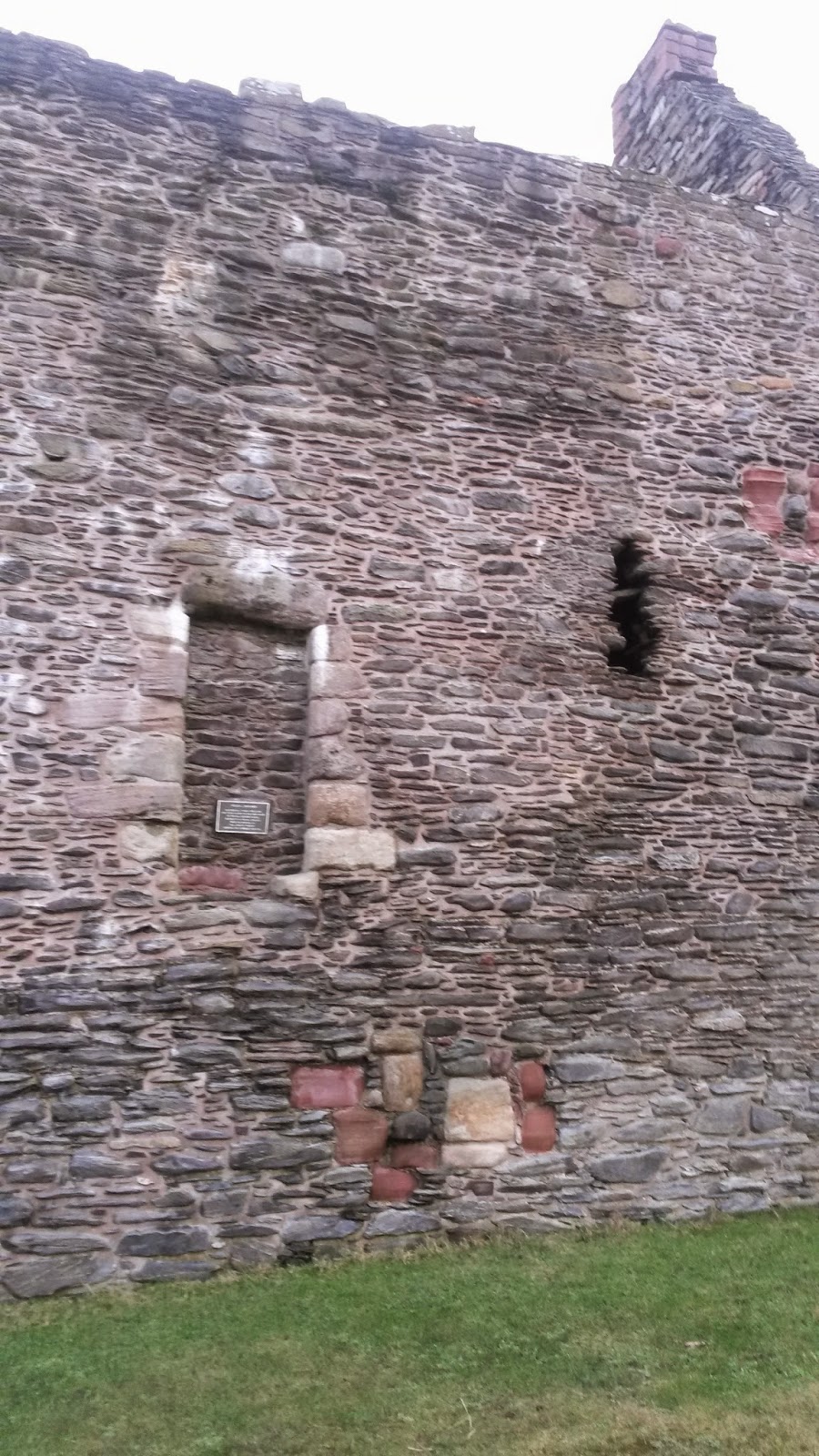 Lochranza Castle was built as a hall house but was added to over the years. The original entrance was high above the ground, reached by a wooden ladder which could be pulled up if necessary. You can see the door on the left with, below it, low windows for lighting up the basement.

In the eighteenth century, the original raised doorway was replaced by a more conventional fortified entrance. 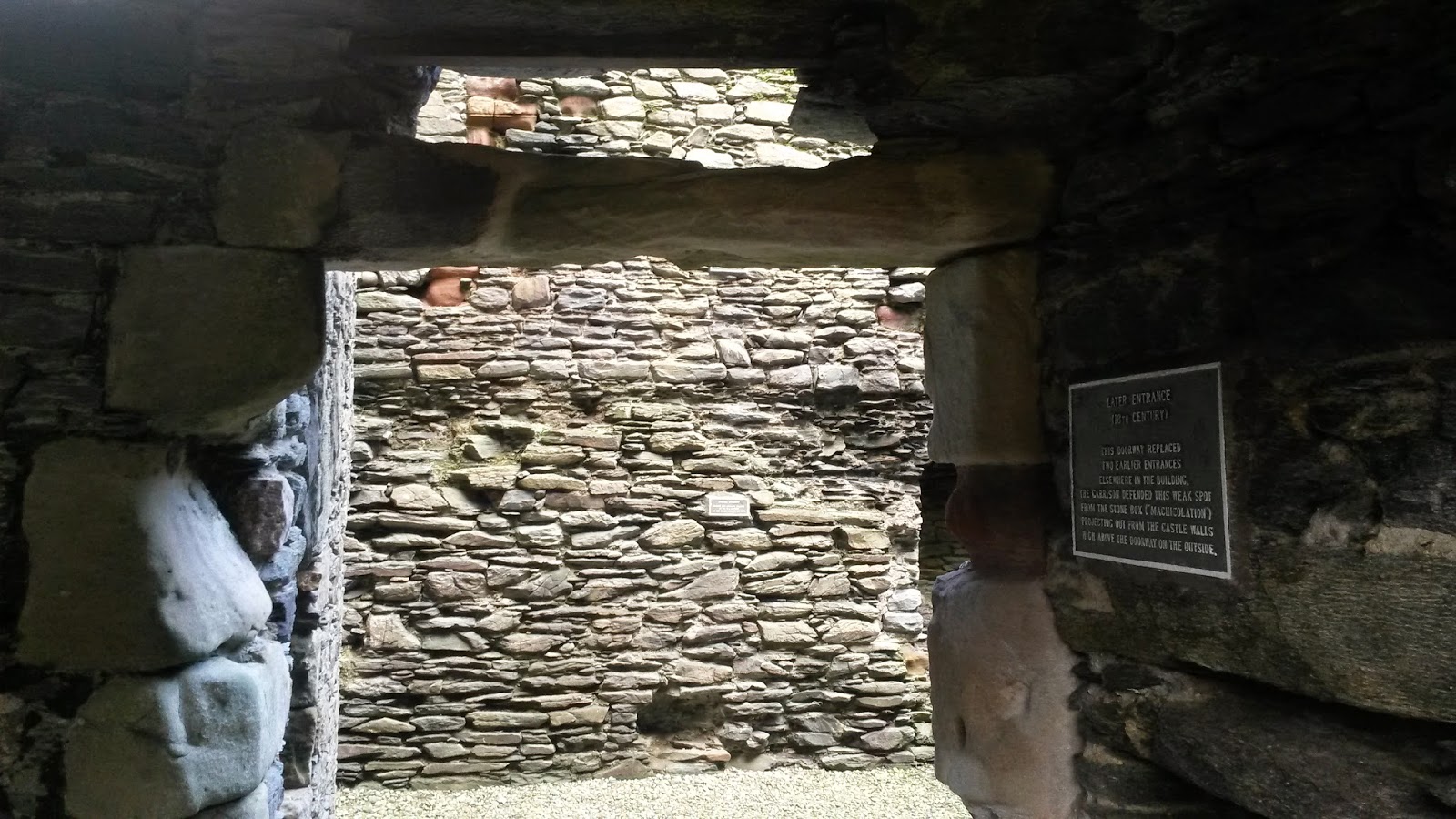 The village of Lochranza stretches in a long low line between the shoreline and the hill. 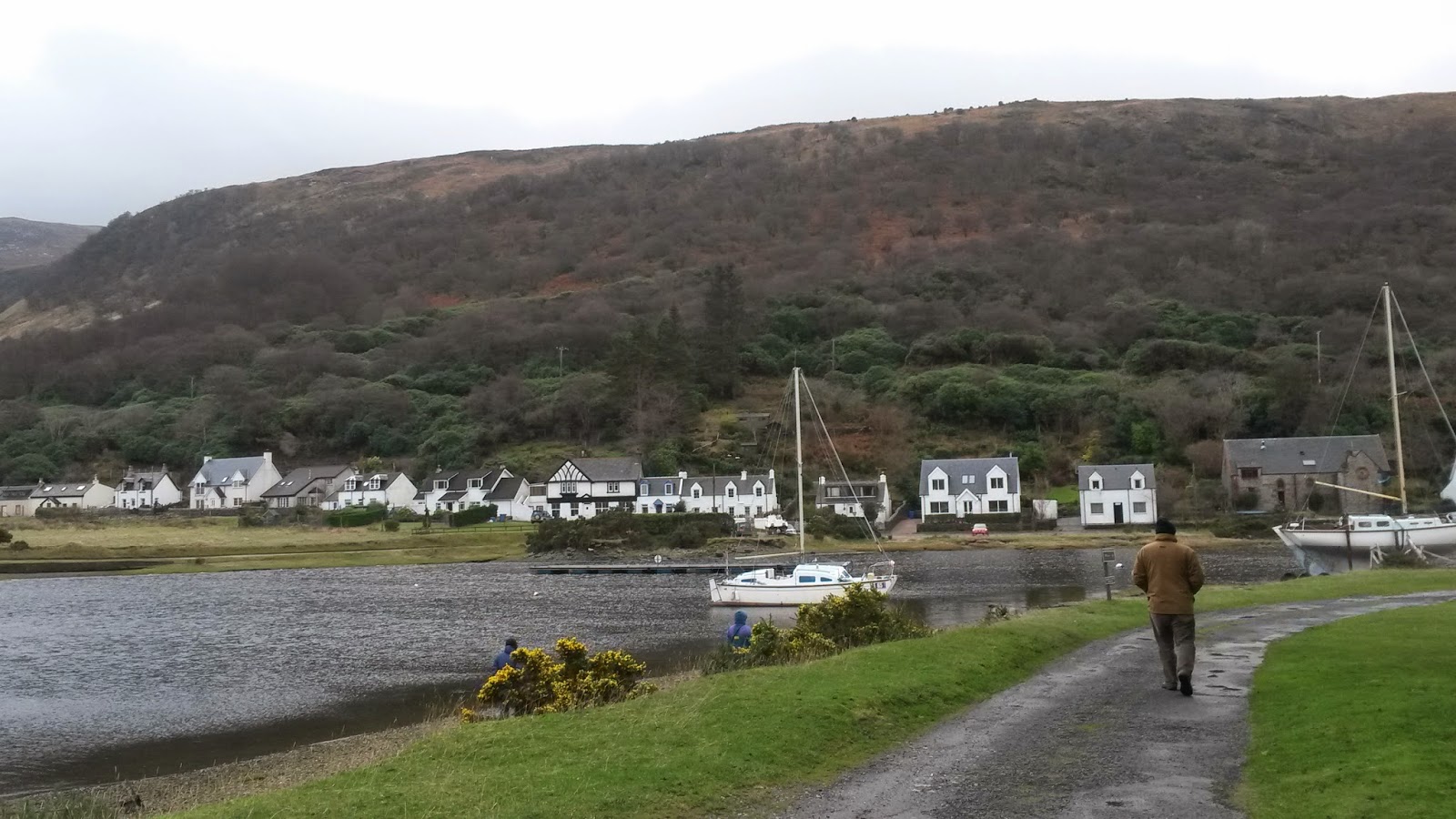 At the furthest end of the bay is the harbour. There the ferry for Holy Isle was lying off shore, waiting for the sailings to start again after the Christmas holidays. 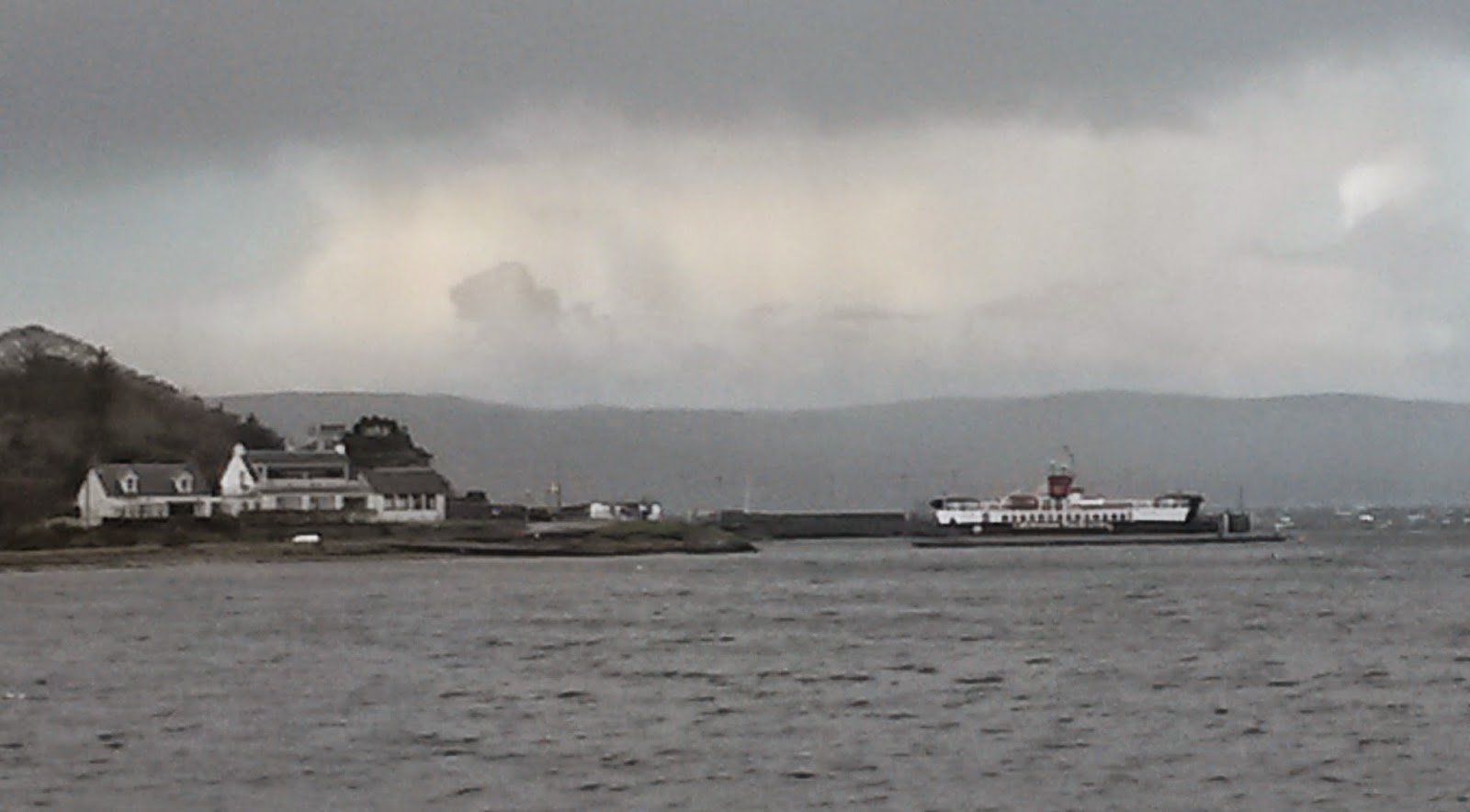 We left Lochranza and began to work our way down the west coast, looking across the Firth of Clyde towards the Mull of Kintyre on our right. 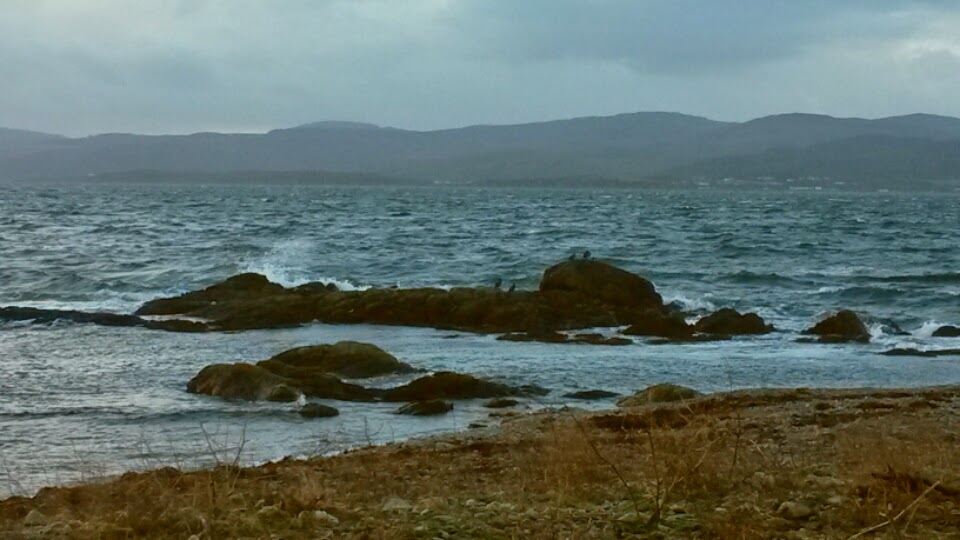 We passed the Twelve Apostles, the name given to a row of cottages along the line of the coast at Catacol. 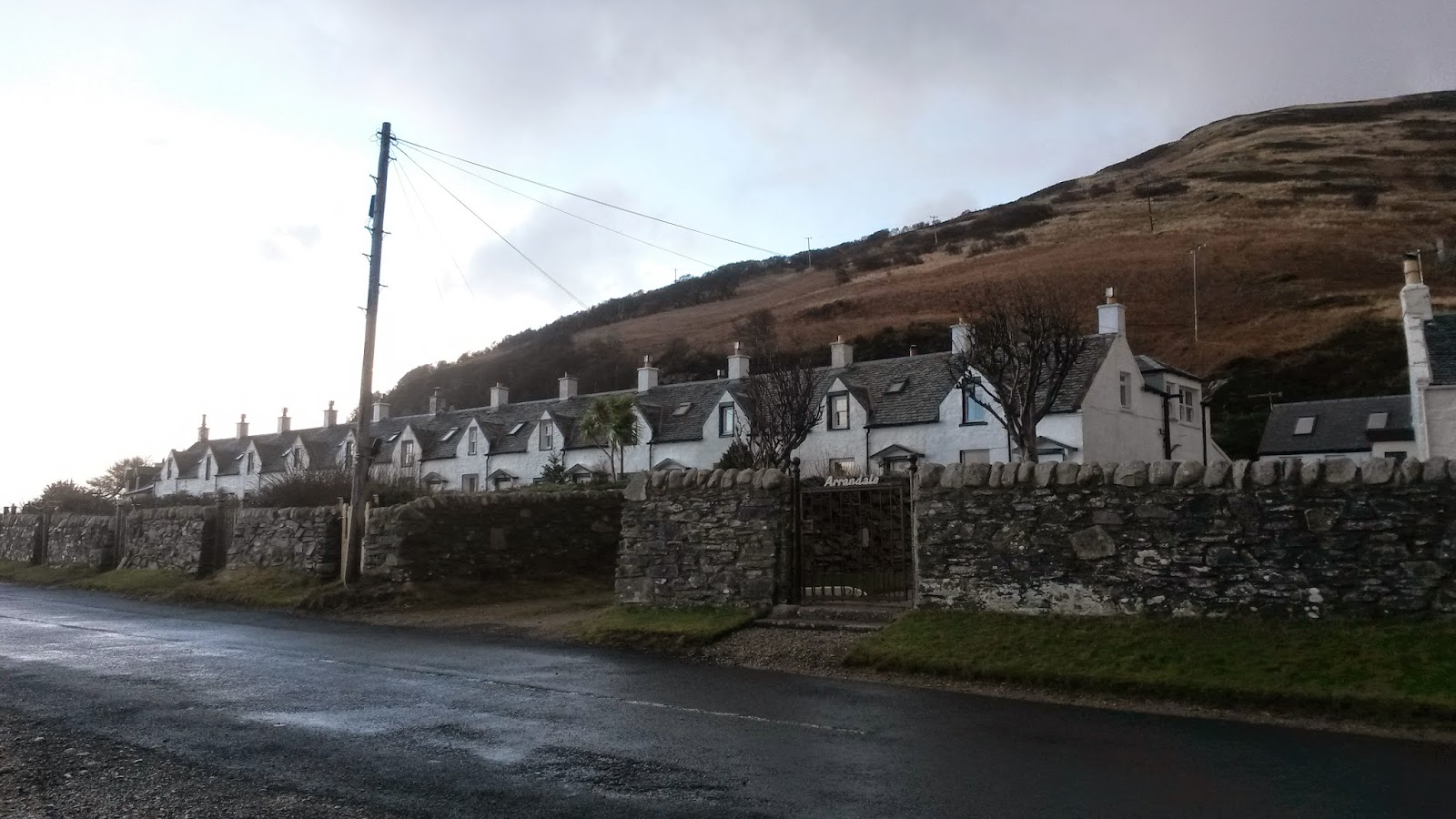 Along the way we saw several examples of raised beaches, stranded millenia ago by falling sea levels, the ancient cliffs and caves still easy to make out. 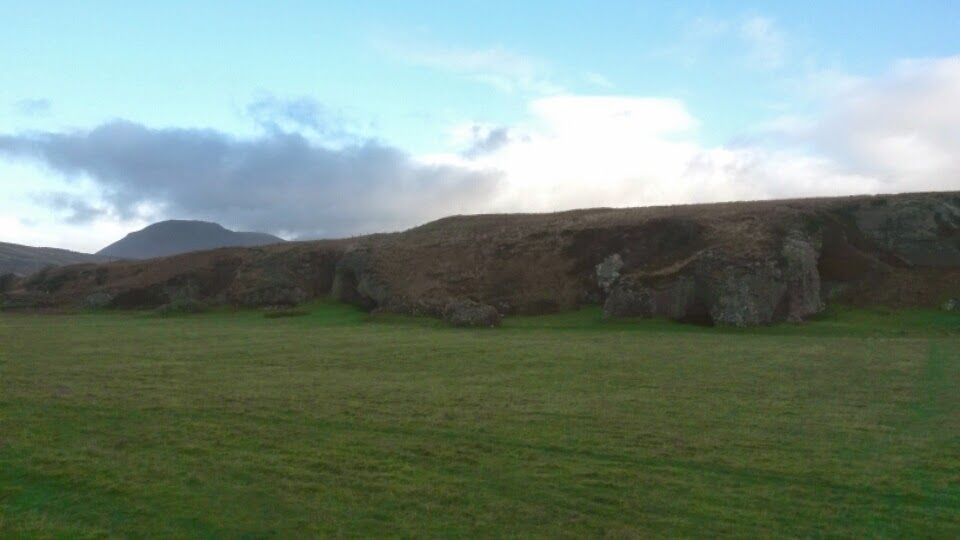 Small villages like Pirnmill are scattered along the way. Pirnmill takes its name from the bobbin (pirn) mill which used to stand here. People here also used to earn their living from crofting and fishing. You can still see the old winding gear for pulling boats above the shore line. 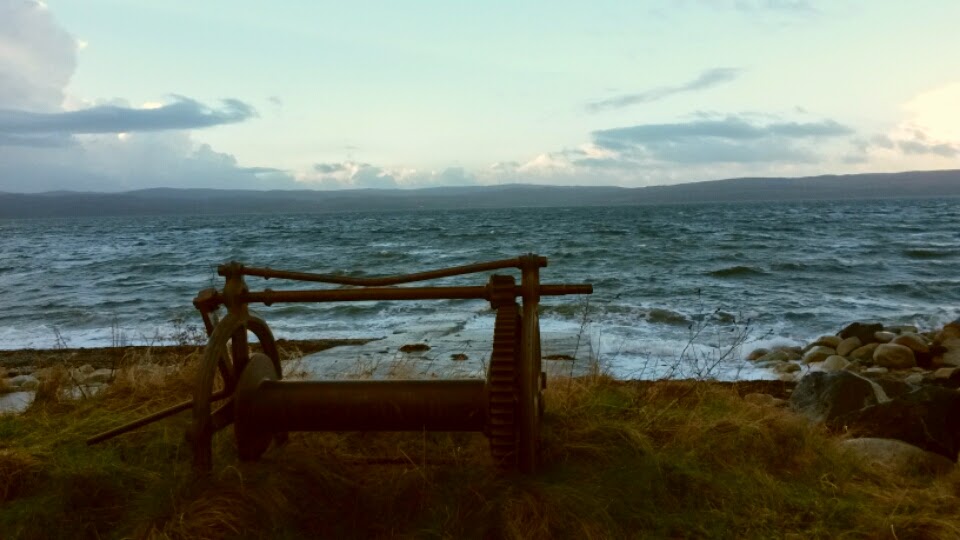 Despite being just a small hamlet, Pirnmill has a golf course and tennis courts, for it has been a holiday area since the nineteenth century.

South of Pirnmill is Machrie, moorland with ancient prehistoric settlements to the east. The village of Machrie has a an excellent tearoom. 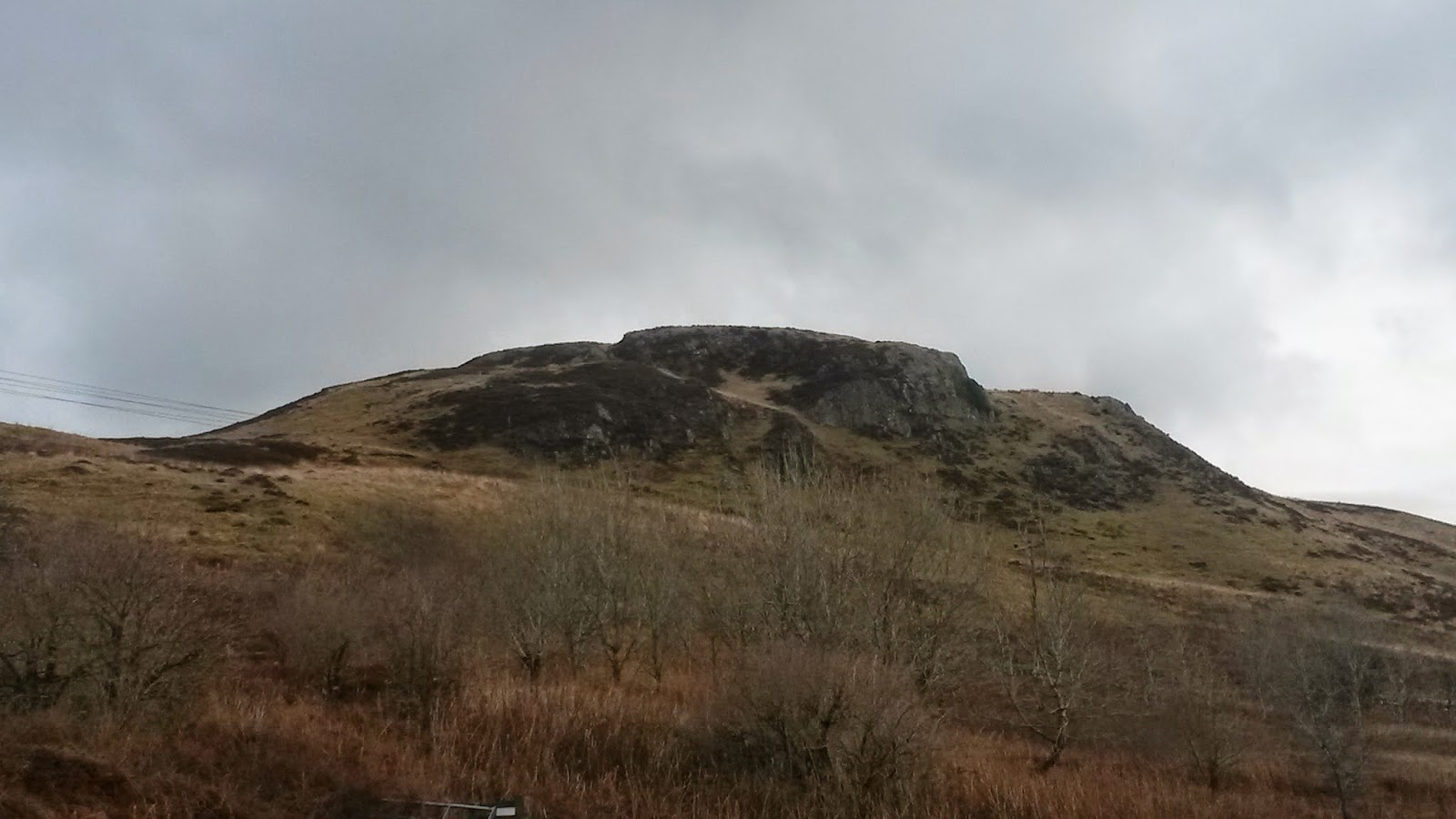 We have already written about the amazing Machrie Moor Standing Stones in an earlier post.

Also in this area is the flamboyant Dougarie Lodge a 'holiday home' for the Duke of Hamilton, though now a commercial estate for sports activities of various kinds, including fishing and hunting. 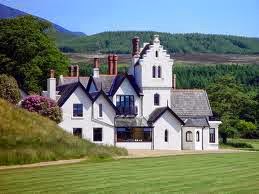 Our next stop was Blackwaterfoot, also the subject of one of our previous posts: Exploring Arran, au retours du temps perdus. So, we won't go over previous ground, but we will make a little detour to see St Molios Church at Shiskine. 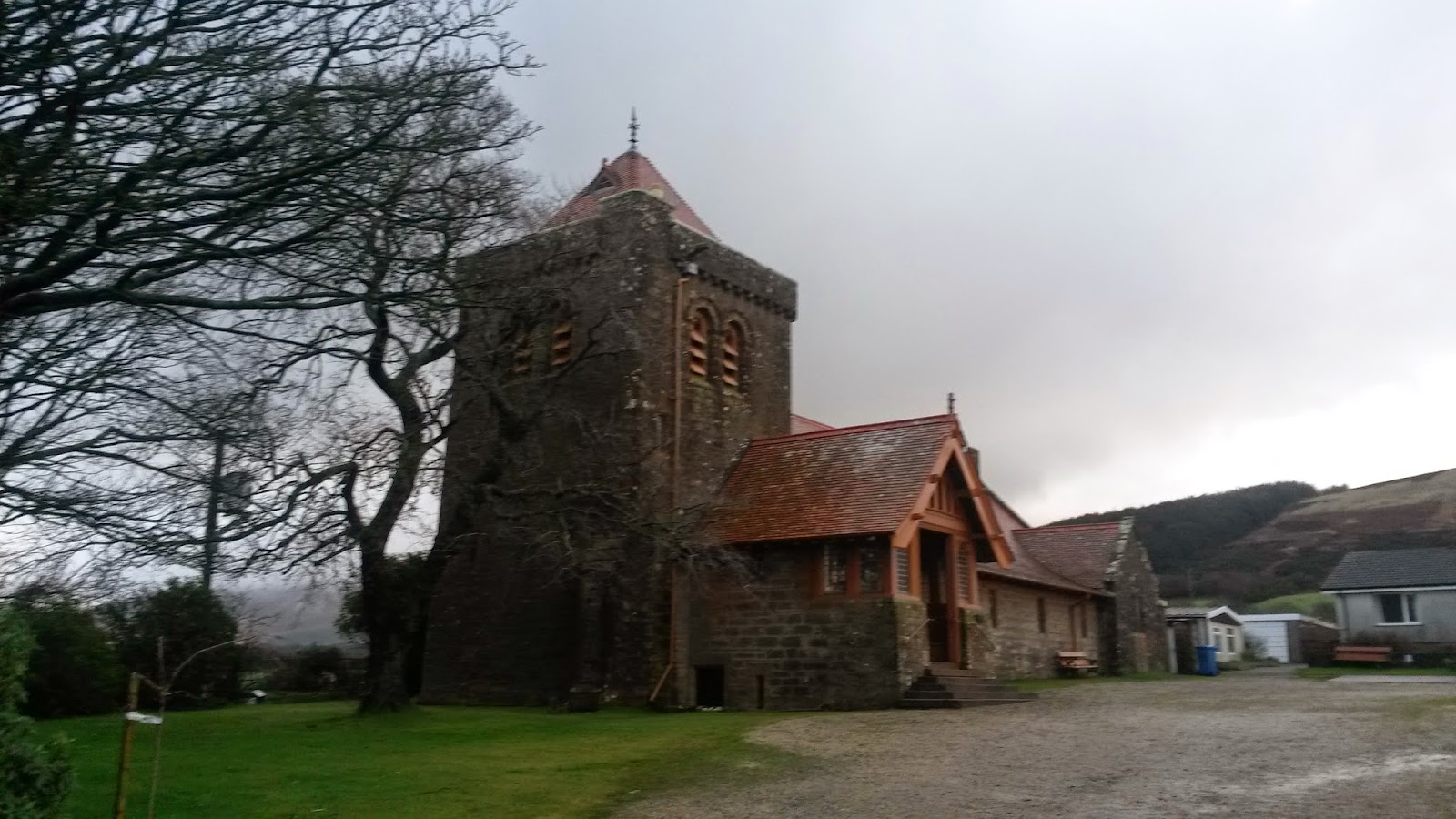 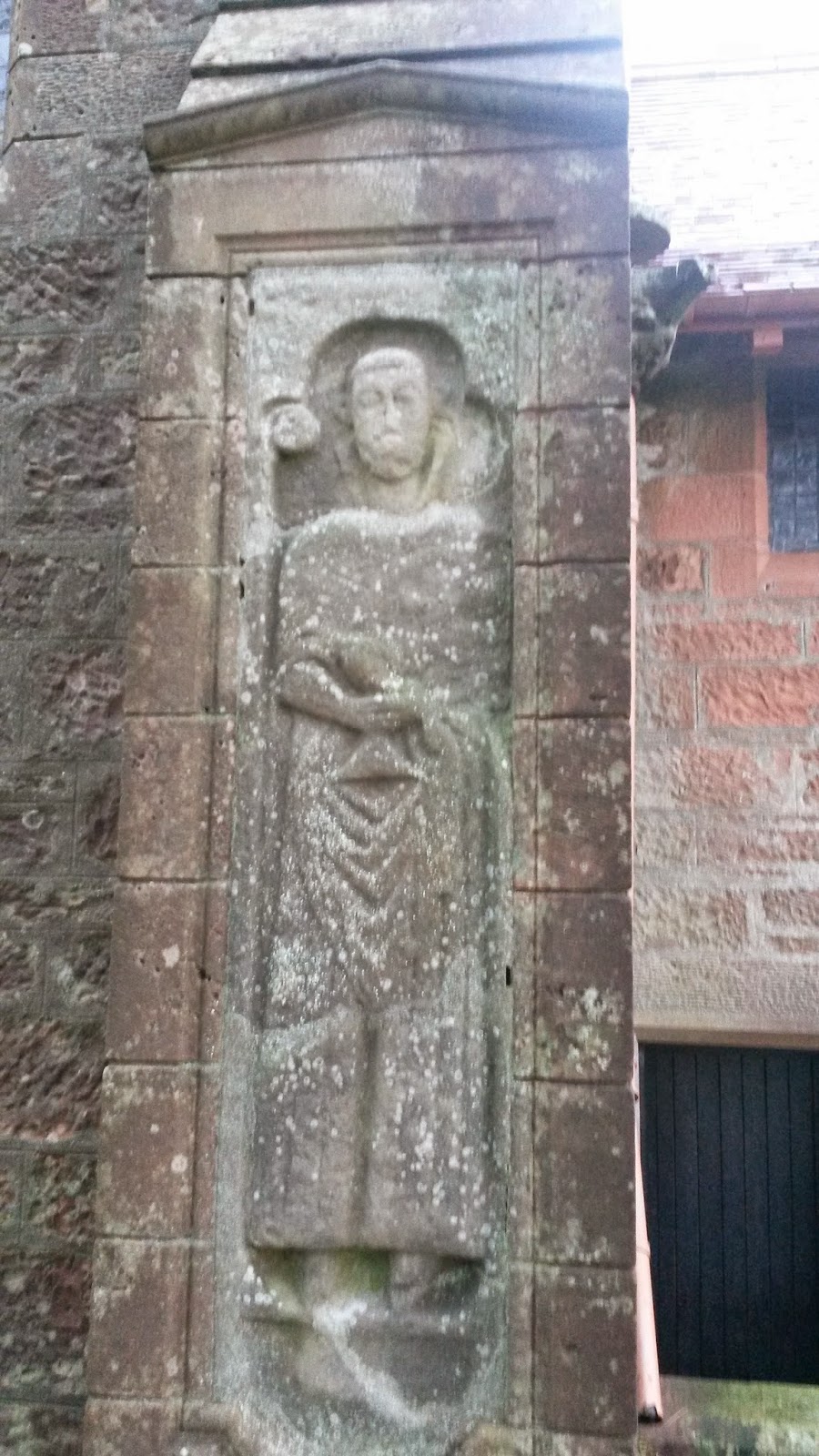 The church is named after the famous saint of Holy Isle, St Molios or St Molaise. The original buildings no longer stand though stones from the ruined abbey at Clachan have been removed to the site of this nineteenth century sandstone church.  On the left you can see a well-preserved memorial to a thirteenth century abbot.

There are also one or two interesting pieces of stonework on the outside of the building. 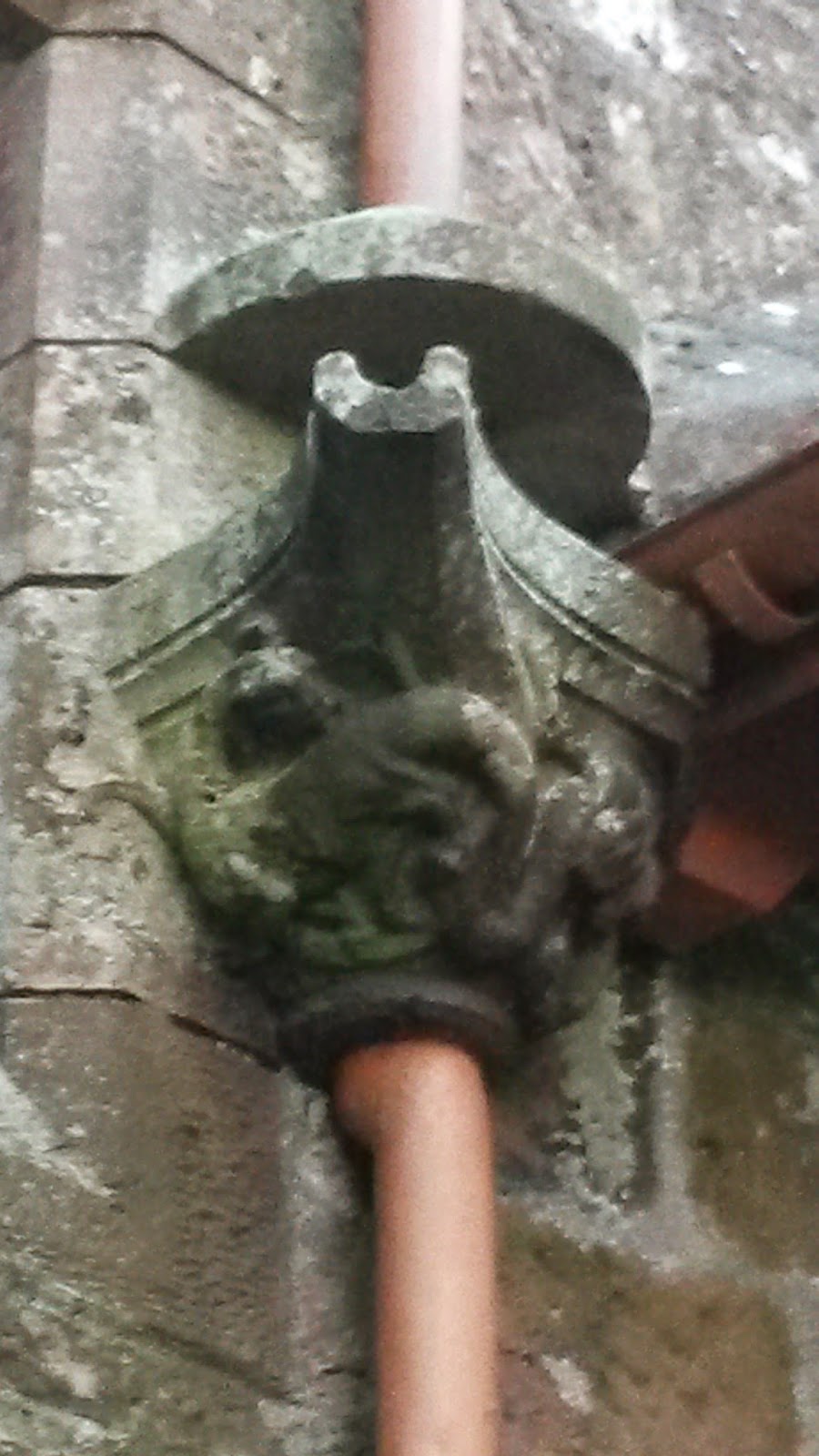 The current building was built after the reunification of the Church of Scotland with the Free Church. In Arran, the Free Church broke away from the Church of Scotland very largely as a result of resentment against the Clearances (eviction of the tenantry) carried out in the early nineteenth century by the Dukes of Hamilton who owned the island and appointed church ministers.

From Shiskine we will take the String Road, so called for its winding route, across to the east side of the island. This short cut does not mean that there is nothing worth seeing on the southern tip. Far from it. We just don't have any photographs of the area.

We do, however, have some good views taken from the String Road, particularly where it reaches its height and begins to dip towards Brodick. From this point you get a good view of Goat Fell and Ben Nuis. 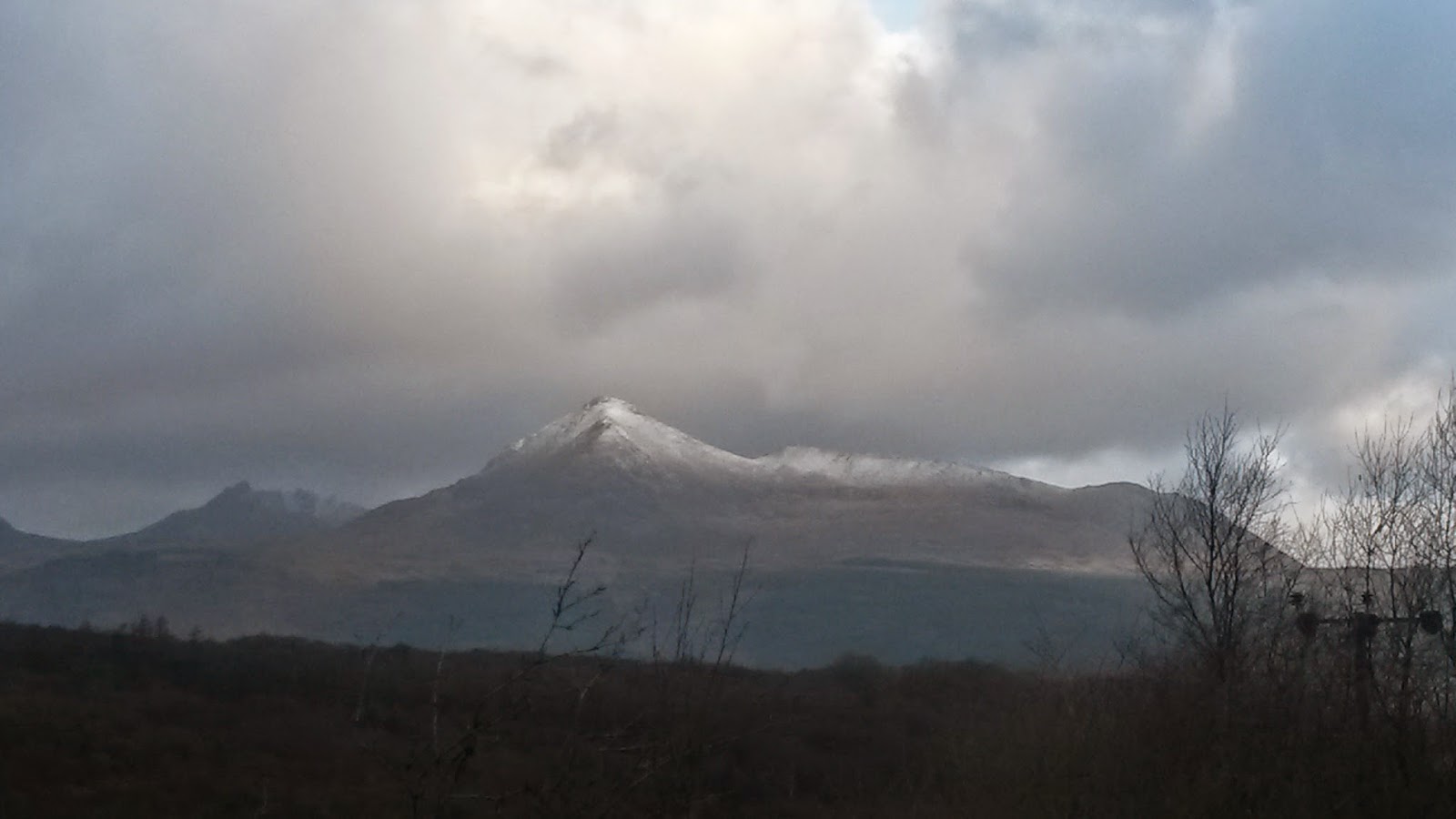 So it was back to Brodick for us, and, next day, back to the mainland. 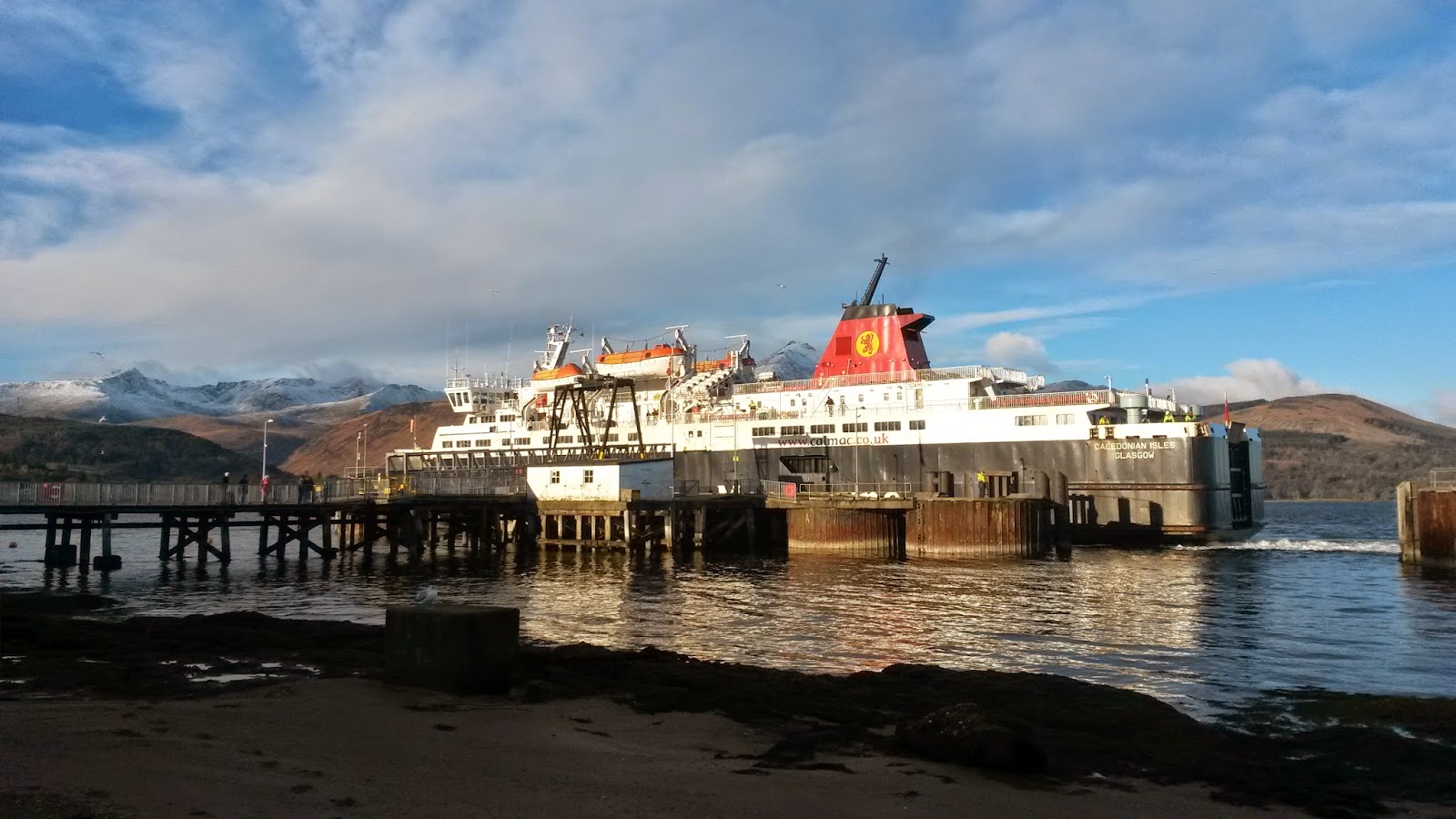 Reluctantly, we waved goodbye to Arran, at least for this year. The island did its best to tempt us to return, with a final view of snow-covered Goat Fell under the bright winter sun. 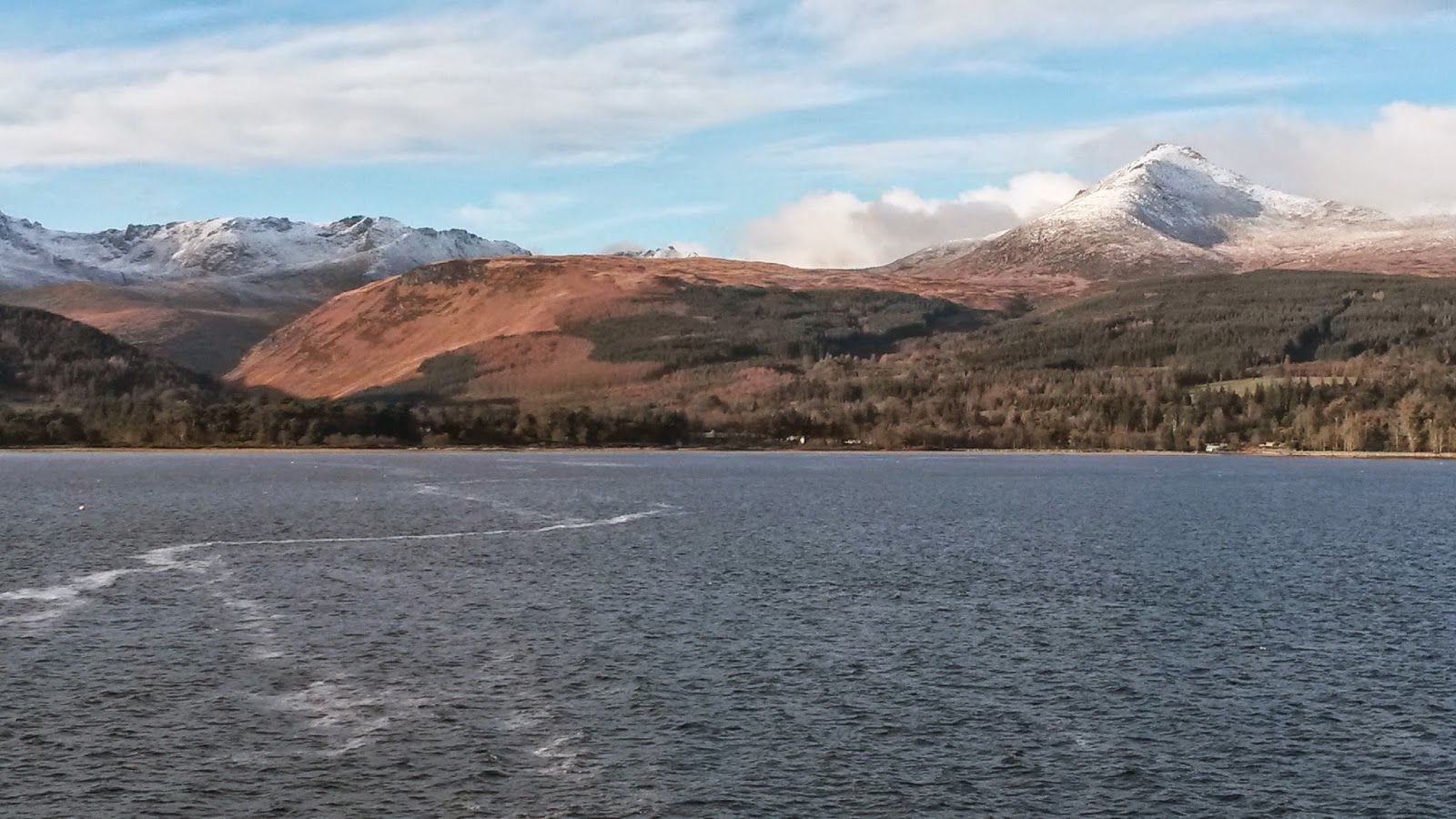 We'll certainly be back.

Posted by Elisabeth Ritchie at 23:10