Edinburgh's Grassmarket: an excellent spot for a hanging

The Grassmarket wasn't the only place where one could be executed in Edinburgh. In fact, the city hangman was somewhat spoilt for choice, what with the Tolbooth (prison) being just up the hill by St Giles' Cathedral. (Look out for the  Heart of Midlothian marked on the cobblestones.)

However, no one could argue that the Grassmarket made an excellent spot for a hanging - if you were one of the onlookers, that is. The castle provided an impressive backdrop to the gibbet, there was plenty of space for the pointing and jeering citizens and a long line of hostelries stood nearby for you to rest your feet and wet your throat dry with cursing. 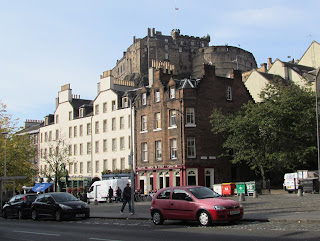 The Grassmarket looks quite neat and tidy these days, for it is one of the most popular attractions for Edinburgh's tourists, especially during the Festival in August. At other times of year it can be busy with the Saturday market and, alas, the squawking and ribaldry of numerous hen and stag nights spent among the open-air eating and drinking places. Still, a recent make-over ensures that it always looks presentable and, usually, picturesque. 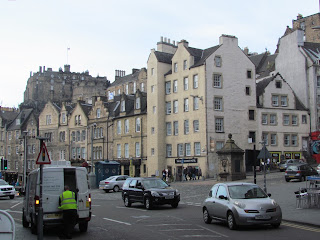 However, in the fifteenth century the market square would have been crowded, filthy and deafening, what with the raucous shouts of tradesmen and merchants, the neighing of the horses brought here for sale and the rattle of wheels on the cobbles. Lined with taverns and inns, the place would have been a-buzz from dawn to dusk. And the smells - just imagine them! 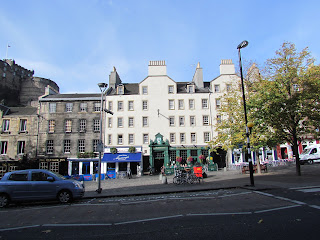 Most of the tenements around the square are nineteenth century replacements for the mediaeval originals, though the White Hart Inn (above), where Wordsworth once stayed, is early eighteenth century. Sadly, some of the buildings on the opposite side of the road are modern blocks. Nevertheless, there are still plenty of reminders of an earlier Edinburgh. 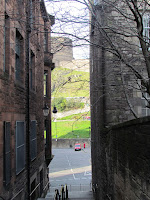 Narrow passage ways, like Advocates' Close (above), separate older buildings. Along one of them, the Vennel, is an unbroken stretch of the Flodden Wall, leading up to the Telfer Wall which runs along the side of George Heriot's School. Both are the remains of old city walls, the former quickly erected by the citizens of Edinburgh after the disastrous defeat at Flodden, in order to repel any attack on the capital by the victorious English forces. The Telfer Wall was erected in a hundred years later as an extension to these defenses. You can see other remnants of the walls in Greyfriars Kirkyard and at the bottom of the Pleasance. 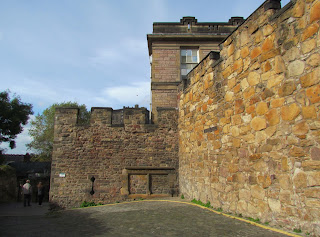 There are lovely views of the Castle from this quiet little corner of the Vennel. 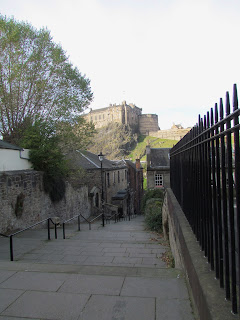 However, back down at the bottom of the steps, the main area of the Grassmarket was the site of several significant, and bloody, events in Scottish history. 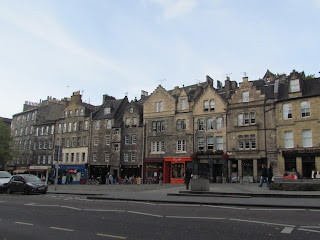 It was in the Grassmarket that more than 100 Covenanters were executed between 1661 and 1688. This period was popularly called The Killing Time. During the Scottish Reformation,the Church of Scotland had based its theology on that of John Calvin and his Scottish follower, John Knox, that thorn in the flesh of Mary Queen of Scots. The Scottish Church rejected the Pope and the traditional Mass and adopted a Presbyterian form of belief, style of worship and system of church government.  Its adherents believed that Christian worshippers needed no intermediaries between them and God. Churches were managed by sessions made up of representatives of the congregation. The Scots Confession of Faith was drawn up in 1560 and signed by King James VI.

While Scottish Presbyterian ways had been grudgingly accepted by James VI, tensions developed thereafter, including during the period of the Commonwealth. After the restoration of the monarchy under Charles II, matters became very difficult. The Church of Scotland refused to adhere to the Episcopal practices of the Church of England which Charles tried to reintroduce into Scotland. In particular, it rejected the position of the monarch as Head of the Church and the role of bishops. The Covenant signed in Greyfriars Kirk (below) in 1638 and adopted by the Scottish Parliament in 1640, made the Scottish position quite clear. Greyfriars Kirk is at the top of Candlemaker's Row, up the hill from the Grassmarket, 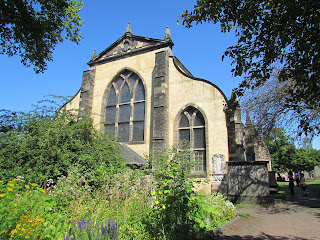 During the civil conflict of the next few years, those people who continued to subscribe to Presbyterian beliefs and practices were called Covenanters. After the battle of Bothwell Brig, 400 of the 1200 Covenanting soldiers captured were kept over the winter in an open-air prison on land next to Greyfriars Kirk. One hundred of the survivors were sentenced to death by Judge Mackenzie and hanged in the Grassmarket. Their bodies were laid out in the Magdalen Chapel (below), a few yards away down the Cowgate, before being buried. In the chapel, you can still see the table on which their corpses were laid. 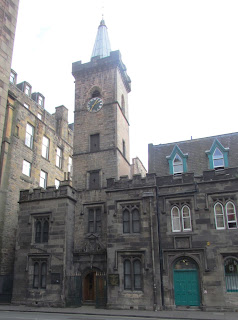 A few of the Covenanter prisoners were sent out to Barbados and South Carolina as 'white slaves', boarding ships at the port of Leith. Their descendants are still there.

In 1707, a memorial to some of the most famous of the executed Covenanters was erected  in Greyfriars Kirkyard. 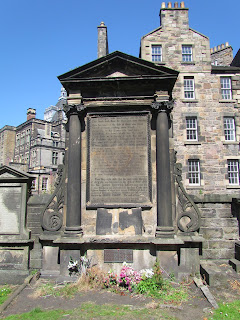 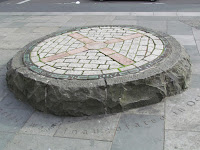 In addition, a more modern monument has been erected in the Grassmarket, on the original site of the gallows (left).

However, it wasn't just the Covenanters who were executed here in the square. In 1724, Maggie Dickson, a fishwife from Musselburgh, was hanged here for murdering her illegitimate baby. On the way to her burial in Musselburgh, she revived but could not be convicted again under Scots law. One of the Grassmarket's pubs is called after her.

One of the most notorious stories is that of John Porteous, In 1736, Captain Porteous ordered his men to fire at a crowd who were attempting to rescue convicted smugglers from the Tolbooth, killing six of them. Although Porteous was imprisoned himself for this act, the mob feared he would be reprieved and decided to take justice into their own hands, beating him and then lynching him in the Grassmarket. He was later buried in Greyfriars Kirkyard. 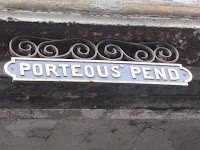 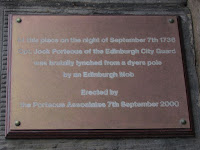 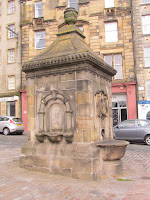 However, these gruesome stories of hangings are all in the past. Nowadays, the Grassmarket makes a very pleasant place to sit and have a drink. Afterwards, climb up towards the Castle by Granny Green's Steps at the western end of the Grassmarket.

Alternatively, wander towards the old well-head at the bottom of Victoria Street at the other end of the Grassmarket. Then amble up the hill towards George IV Bridge, past the attractive independent shops and restaurants. It will have been a very pleasant way to spend your afternoon. 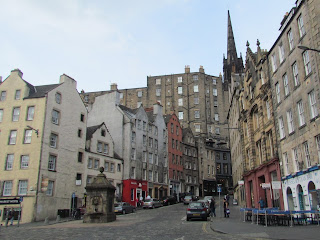 Exploring Edinburgh's Cowgate and finding a hidden treasure, which is about the Magdalen Chapel.

Greyfriars Kirkyard, the burial place of the great, the good and the completely unknown

What were the Scots doing in Barbados and how did they get there?

Posted by Elisabeth Ritchie at 17:33