Pots of gold but no rainbow in St Andrew Square, Edinburgh

It was raining when I visited St Andrew Square last week. Edinburgh is normally far drier than Glasgow, its step-sibling to the west, so you can tell how bad a summer we've had when even we are complaining about the rain.

Pity about the weather for I'd decided it was about time that I started writing about the New Town of Edinburgh and I was not going to be put off by a few spots of rain - or even a downpour. This is the reality. Scotland can be wet. 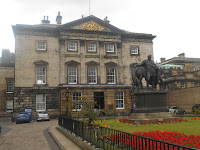 Let's just be clear about that word 'new', though. St Andrew Square is 'new' as in the eighteenth century use of the term, not 'new' as in 'built last year'. The New Town of Edinburgh was built to house the rich citizens of Edinburgh when the Old Town became just too cramped, filthy and smelly to be borne any longer. James Craig produced the plan for the New Town and it was gradually built over a period of just under a hundred years, from 1767 until 1860.

The advantage of moving to the New Town was that you could leave the poor behind you. Compare the tall houses of the Old Town (right) seen on a sunny day last year, with the standalone grandeur of Dundas House above, which occupies the east side of St Andrew Square.

In the Old Town, families lived on top of each other, the tradesmen at the bottom, the rich people above that and the poor on the upper floors. In a crowded city without proper drainage, you just couldn't get away from your neighbours. Indeed, if you did escape the noise by going out, you were likely to suffer the indignity of having the contents of their chamber pots emptied on your head: gardey loo! In the New Town you got space, and the poor became invisible.

The inhabitants of St Andrew Square have always had pots of money. Sir Lawrence Dundas, for whom Dundas House was built in 1774, made his money supplying the British army during the Seven Year's War and the Jacobite Rebellion. He became a banker and dealt in property: not just a house here and there, but backing the construction of the town of Grangemouth and the Forth and Clyde canal. It seems appropriate that his house is now the headquarters of the Royal Bank of Scotland, though its business may be rather less secure than that of the Dundas family. 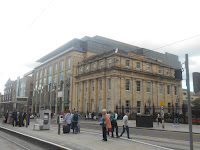 The frequenters of St Andrew Square still have plenty of money, though it is less likely to appear in the form of gold. On the corner of Multrees Walk, and to the left of an annex to Dundas House, is Harvey Nichols. Much to the chagrin of the big spenders in Glasgow, St Andrew Square in Edinburgh was chosen for the first Scottish branch of this flagship London department store: something to do with the ambience, I assume.

Just down from Dundas House is the splendid building on the right, erected in 1806. It was built as the headquarters of the British Linen Bank, which was later taken over by the Bank of Scotland. 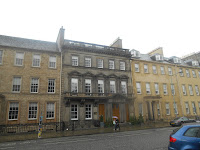 In fact, there's a whole row of banks and insurance companies on the north side of the square, for the square is now a major financial centre. In the eighteenth century, these were the first houses to be built and, like Dundas House, were also occupied by wealthy families. 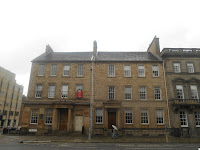 Number 21, at the corner, belonged to the family of Henry Brougham, 1st Baron of Brougham and Vaux. Brougham was educated at the Royal High School and Edinburgh University. He was bright, seriously bright. Brougham was a lawyer who became Fellow of the Royal Society at the age of 25, for his work on light and prisms. 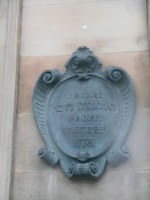 Brougham's family might have had pots of money, but young Sir Henry also had a conscience. He became a Whig Member of Parliament and campaigned against slavery. He opposed restrictions to trade with Europe, proposed educational reforms and supported the extension of the suffrage in the 1832 Reform Act. In 1825, Brougham helped to set up the Society for the Diffusion of Useful Knowledge. 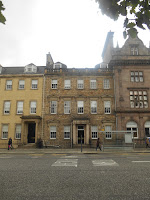 Number 26, on the right, was one of the first houses to be built. It is well worth looking closely at all the stately Georgian buildings in this row. Admire the porticos with their elegant columns. 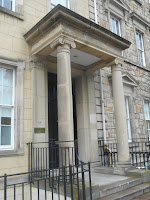 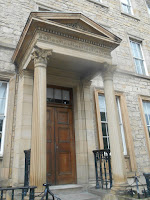 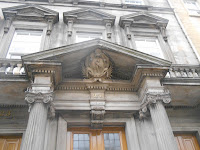 David Hume, a famous figure of the Scottish Enlightenment, also lived in St Andrew Square, at the opposite side from this row. Sadly,  His house has long since been torn down, and the demolition of the unprepossessing buildings on the south side of the square, which replaced the Georgian originals, is continuing. Let's hope that something more attractive is built in their place. 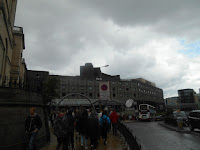 That wasn't the case at the back of St Andrew Square, on Leith Street. Here a square of Georgian buildings, also designed by James Craig, was demolished in 1964 to be replaced by the dismal brutalist concrete block  on the right, the unloved St James' Centre. Admittedly, the original buildings had been allowed to become ruinous, but couldn't something better have been done? Similar decisions were made about a number of buildings down Princes Street, one of the most famous streets in the New Town. Even less excusable are some of the crudely redesigned ground-level facades on Queen Street.
The ghastly St James' centre will soon be demolished.  Let's hope something better takes its place.

However, back to St Andrew Square. For many years, the square served as an open--air bus terminus. Now, however, a purpose-built site just off the square has taken over and it has returned to non-commercial use. What I have ignored so far is one of the square's most visible structures: the memorial to Henry Dundas, 1st Viscount Melville, one of those who supported the building of the New Town. The column was modelled after Trajan's column in Rome and is so high that Robert Stevenson was called in to advise on its construction. 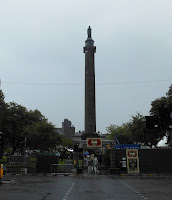 Like Henry Brougham, Henry Dundas went to the Royal High School and Edinburgh University, although 30 years later. Dundas also became a lawyer. However, unlike Brougham, Dundas was a Tory. Although a strong proponent of the Scottish Enlightenment, Dundas opposed those who tried to abolish slavery and held back the legislation for many years. He believed in Britain's expansionist role, particularly that of the East India Company. Dundas really was one of the original Tory 'grandees'. The ill-health of King George III meant that the Royal Family did not visit Scotland for many years. In their absence, the control Dundas held over Scottish politics was so great that he was known as The Uncrowned King of Scotland. He became the 1st Secretary of State for War following the French Revolution. In 1806, as 1st Lord of the Admiralty, he became the last person in Britain to be impeached for the misappropriation of public money because of mismanagement. 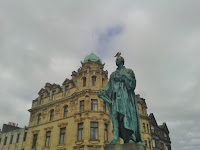 In due course, Edinburgh did receive a visit from a real member of the Royal Family, George IV, previously Prince Regent. You can find a commemorative statue part way along George Street, the heart of the New Town. Here he is on the right, adorned by a seagull. George was keen to show his support for Scotland by wearing a kilt. Embarrassingly, and much to the amusement of his subjects, his kilt was far too short and looked ludicrous on his podgy frame. You can confirm this for yourself by viewing the painting in the National Portrait Gallery round the corner on Queen Street.

George Street is now the premier street of Edinburgh, overtaking Princes Street. Here the prosperous citizens of Edinburgh purchase their designer clothes and sip their glasses of champagne. George Street joins the two great squares, Charlotte Square and St Andrew Square, and is punctuated every so often by statues of great Scots: here James Clerk Maxwell.

However, George Street, Charlotte Square and the rest of the New Town must remain subjects for another day. Perhaps it'll be a little brighter.


Posted by Elisabeth Ritchie at 21:01