Cowering from Kalashnikovs in Crete

We were woken by the harsh rat-a-tat-tat of a machine gun. It was one o'clock in the morning. Always a light sleeper, I jumped from bed at the first burst of gunfire. It was unmistakeable: a high calibre battlefield weapon was being fired just below our window, its deep staccato retorts insistent and terrifying.

Stuart woke at the second burst, with a little help from me, it has to be said. Then came the explosions: two, one after the other. We listened for screaming and debated where and how we would hide if necessary. The tourist deaths in Sousse were still fresh in our memories. Indeed, I could recall in some detail the newspaper accounts of terrified guests who had hidden from terrorist gunmen in their Mumbai hotel a few years ago. The quiet Cretan resort village of Kissamos might seem an unlikely setting for terrorist mayhem, but would also make for a very easy target.

'If it had been terrorists, we'd have heard screams,' said Stuart eventually. You see, it wasn't just me who had been cowering. Even my normally phlegmatic husband had been rattled.

Eventually we peered through the blinds, reassured that no ricocheting shots would now smash through the glass. All was quiet. Back to sleep; well, for a short time, that is. An hour or so later, another explosion and then real silence. Perhaps we would live till morning. And so we did.

The following day, we described our experience to the hotel staff. Neither had been on duty at the time but asked for detailed descriptions of what specifically we had heard.

'Ah, a Kalashnikov,' one said. Just what Stuart and I had guessed.

'There was probably a wedding,' she added.

Her young male companion sniggered in the background, enjoying the discomfort of this pair of soft northern Europeans.

'A Kalashnikov!' I exclaimed. 'This isn't Syria.'

Shame-faced laughter, then silence. 'It is just our culture.' And that was that; no more to be said.

'Just our culture'. The same could have been said of the burning of witches in our own country two or three centuries ago, or child sacrifice or genital mutilation in parts of Africa today. In the United States, the gun culture is so deeply embedded in the national psyche that not even the mass deaths of children, the disgust of the President or the horror of the rest of the developed world can dislodge it.

And, in our beloved Crete, can 'culture' be a sufficient excuse for the terrorising of visitors seeking peace and quiet in this most wonderful of Mediterranean islands?

This wasn't the first time we had heard shots being fired here, of course. Regular holidays in Sfakia, down in the south west of the island, have made sure of that. In Sfakia, there is scarcely a road sign which hasn't been used for target practice. Our Cretan friends had explained about the island being flooded with guns after the Germans left at the end of the war. We knew about the volleys fired at weddings and the Sfakian obsession with guns.

However, the sounds we heard in Kissamos last week did not resemble in anyway the familiar high report of a hunting rifle. And it wasn't even in Sfakia.

As we drove south to our customary haunts, the usual punctured road signs began to line the route. Was it our imagination, or did the holes look bigger than in the past? Certainly none of them seemed rusty. Some pretty serious target practice has been going on here, we thought, and very recently. 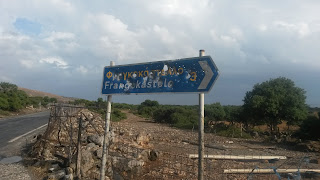 I looked over the sea towards the now chaotic country of Libya, and considered the vacuum left by the demise of Gaddafi's brutal regime. Two hundred miles of sea may seem quite a distance, but boats of all sizes have been making the journey since the collapse of Libya's political and social structures. We British had had a hand to play in that collapse as in so many other conflicts in the Middle East: Palestine, Iraq and Afghanistan.

And indeed, similar speculation about the sources of this heavy weaponry has apparently been bubbling away in Crete for some time now. Are there now more AK47s on the island than before? What is the gun of choice now that World War II has long been forgotten and its weaponry rusted away? Are illicit battlefield weapons being landed on the quiet shores of islands to the south of the Mediterranean and, if so, why? Would you kill a kite with a Kalashnikov? Surely not.

We have had long discussions with our Cretan friends about the gun culture on the island. Thousands of pounds can be spent on bullets just to be shot into the air during weddings and funerals. The same happens in Jordan and Morocco. And, yes, people are hurt for what goes up has to come down somewhere, and it won't necessarily be the ground or a flock of sheep which suffer the most damage.

However, our friends are insistent that this Cretan gun culture is not about an aggressive and pre-emptive defence of hearth and home, as in the USA. Nor is there much evidence of mass killings by the mentally disturbed, though I am sure that there will be individual incidents as in our own country.

In Crete, as in the USA, there is some sense of a 'right to bear arms' but it is not based on a twisted interpretation of the founding principles of the nation as in America. Cretan gun culture, our friends say, is more about defining and asserting masculinity. Perhaps a nation that has been invaded and subjugated time and time again - by Venetians, Turks, Germans and even pirates - may still have some kind of need to demonstrate its 'manhood'.

And if the traditional rifle or pistol has been replaced by the Kalashnikov, does it really matter?

Well yes, I think it does.

We are all acutely aware that the front lines of warring and fractured states have been moving ever nearer to the Mediterranean. The victims have been pouring into southern and now northern Europe to escape the impact on their homes, their families and their futures.

Our reaction to the evidence of guns around us in Crete has always been quite indulgent. For us this island has been a peaceful haven and the odd crackle of rifle fire simply endearing evidence of a culture of survival which we can only admire. And who are we to make judgements of others anyway?

We British come from an island which has never suffered the ignominy and horrors of occupation, unlike most of the rest of Europe. Well, at least not since William the Conqueror, that is. Our closest involvement has been to inflict occupation on others through our imperial ambitions or to adopt a 'moral' position by fighting on the side of the victims as in recent wars. During the second World War, Scotland's Clydeside, London's East End, Coventry, Hull and the north east of England suffered devastating bombing but we were never actually invaded.

Nevertheless, I think that we are reaching a tipping point in Europe. War could so very easily break out again on our shores and already has done so through terrorism on our streets. We cannot isolate ourselves from the misery and desperation of countries on our borders, particularly when we have contributed to that misery through our own aggressive actions. Drowned and desperate refugees are the signs of that.

Kalashnikovs in Crete may no longer be just evidence of a proud centuries-old culture. They may just be among the first signs of the waves of conflict lapping on our shores. Nothing intentional, of course. There is no terrorism in Crete, whatever our midnight fears might suggest. However, what may be 'washing up' on European shores are the mechanical detritus as well as human victims of wars all around us.

Perhaps we should all be cowering.

Posted by Elisabeth Ritchie at 18:55