You might be forgiven for thinking that there is nothing new to be discovered in Speyside. The Cairngorm National Park is one of the most popular areas of the Highlands. Easily accessible by train and from the main A9 trunk road, the attractions of Speyside are pretty well known: the distilleries with their excellent whisky, its well-ordered 'capital' Grantown-on-Spey, the (over?-) developed tourist settlement of Aviemore, attractive villages like Boat of Garten, its lakes, forests and mountains and the broad River Spey itself wearing away the rock of this ancient, once glaciated, valley. One could go on and on. 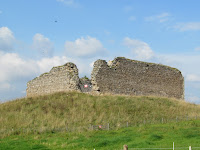 Every so often, however, even in this relatively well-frequented area, the regular visitor can still be ambushed by small pleasures. One such is Castle Roy. There you are, bowling along the B940 on your way to Nethy Bridge when suddenly, at the side of the road, you see a ruinous stone structure rising above the level of the surrounding fields. 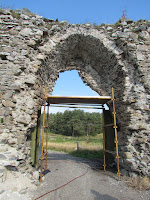 Now, Castle Roy is not one of the great defensive castles of Scotland. It is not a Stirling or an Edinburgh. It is not a regal palace such as Linlithgow or Holyroodhouse. Nor is it a scene of bloody treason, witchcraft and murder like Glamis or the seat of a great clan chieftain like Dunvegan, nor even a gentleman's fortified country home like Crathes or Craigievar. Castle Roy isn't even very beautiful, though its situation most definitely is. There it stands on a glaciated mound, looking out across the plain towards the mountains of Cairngorm. 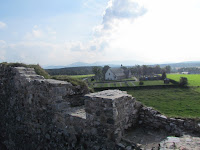 No, nowadays Castle Roy is a ruckle of stones, the scant remains of what was once just a fortified shelter and look-out post built some time in the thirteenth century. Here, the chief of the local clan would have stopped for a night or two with his retainers while he went hunting in the nearby forests of Abernethy. The Comyns were a well-known family, Norman colonists who came over from France with William the Conqueror. In 1306, the Red Comyn died when he fought Robert the Bruce, offspring of another Norman-French family, for the Scottish throne. In 1420, the land was taken over by Clan Grant. 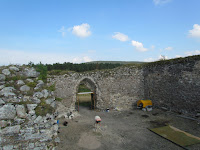 When members of the Comyn hunting party rode through the high arched doorway, they wouldn't have been met by very much. Huddled within the seven-foot-thick square walls would have been just a few wooden structures, perhaps two storeys high, now long disappeared,. A rudimentary kitchen and some basic mediaeval sanitation - a hole in the wall with a drop down the mound at one corner and another hole one storey up, called a garde-robe. In its basic very solid structure, however, Castle Roy is to all intents and purposes unchanged from the day it was built. 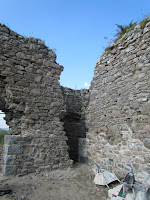 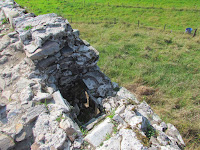 And that is just about that. What more is there to say?

Nothing much, except, of course, what are we to do with all these piles of old stones? Britain is scattered with old churches, ancient castles and crumbling stately homes. What are we going to do with them all? London Bridge, of course, was sold to an American. But London Bridge was famous. What about somewhere like Castle Roy? Not famous, not beautiful and with few historical stories to make it interesting.

Well, the people of Nethy Bridge knew just what they wanted to do with Castle Roy. They raised money, set up the Castle Roy Charitable Trust, took the ruined building over from its last owner, a member of of the Grant family. In the late 1990s, the Trust started to plan the rebuilding. Walls have been braced, foundations stabilised and collapsing masonry rebuilt. And further plans are afoot to bring it back to life once again, developing a visitor centre and even holding weddings and other events there.

Funds have been raised through a variety of means, not least of which is opening up ownership to Tom, Dick and Harry. You too, can own a 'square yard' of Castle Roy and even, as a landowner, call yourself Laird or Lady! Don't get too ambitious, however. There'll be be no building bungalows at the foot of the crenelated walls. At the end of the day, Historic Scotland is in charge. 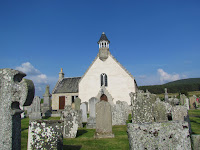 A similar approach has been taken to the historic Abernethy Old Kirk, below the castle mound. The site has been used as a church since the 1100s, with the present structure built in the 1740s. When it proved surplus to the church's requirements, the local community purchased the building and has managed it as a local resource ever since.

This kind of approach cannot work everywhere, Buildings fall down and others take their place. Just think about Edinburgh's Royal Mile. The striking Georgian mansion houses and public buildings of Edinburgh's Lawnmarket would never have come into existence if the rambling old mediaeval city had not been demolished or built over.

Even great stately homes may be allowed to disappear when so ruinous that renovation is impractical or too costly. Much of the great eighteenth century house in Clumber Park in Nottinghamshire burnt down in 1879, and was eventually demolished in 1938, leaving only the chapel and stable block. Interestingly, however, the National Trust is planning to rebuild Clandon House, a lovely eighteenth century mansion house in Surrey, which was burnt down last year. Even more shocking, only the ground floor will be an exact restoration. Other floors will be modern in design and furnishing. The newspapers have had a field day.

However, Castle Roy is different. The decision to make the castle rise and live again was not taken by a government agency. No matter how respected the National Trust or Historic Scotland may be, their decisions cannot really be said to be based on the views of the local population but rather reflect national artistic, cultural and historic priorities. Nethy Bridge, however, is a community and it is the villagers themselves who decided that Castle Roy should rise again.

So, why don't you drive along the B940 one day and see how far they have got?


The information in this post has mostly come from the website of Nethy Bridge village. The photographs are my own.
Posted by Elisabeth Ritchie at 22:03