Cramond Kirk: building on what the Romans left behind

Pity the poor damp Roman legionary, shivering under the lowering grey clouds as he gazed north over Cramond Island and the Firth of Forth towards the unconquered tribes of Fife and beyond. 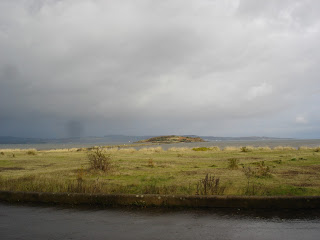 Our long-dead  soldier probably hadn't come from sun-drenched Rome itself but from conquered Gaul. Nevertheless, during much of the year he must have hankered nostalgically for his erstwhile home in France or Germany, almost certainly a good deal warmer than chilly Cramond fort, one of the remoter outposts of the Roman Empire. The Romans named it Caer Amon, the fort on the river.

You can still see what made Cramond such a strategic location. Here, the River Almond flows into the River Forth forming a natural harbour. You could look north across the Firth, east to the sea and west along the navigable waters to central Scotland. 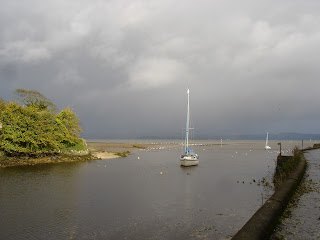 A sentry might well shake with cold; he might also shake from fear. The Romans never did manage to pacify the northern tribes, despite incursions into present day Angus and Aberdeenshire, where you can still see the remains of their temporary hillside forts erected by troops on the march.

The permanent fort at Cramond was built around AD 142, on the orders of Emperor Antoninus Pius, as an outpost of the Antonine Wall to the west. Later on, when things got tricky, the troops retreated to Hadrian's Wall a hundred miles or so to the south. In 208, the garrison at Cramond was restored when Emperor Septimius Severus tried once more to invade the wild northern reaches and put down their rebellious tribes. Despite some rebuilding, the fort was eventually abandoned, Severus himself dying at York in 211. The following year, his son Caracalla murdered his other son Geta, paid off the tribes and retreated once more to Hadrian's Wall. Local people continued to live outside the walls and then to occupy the fort itself even as the Roman occupation of Britain came to an end. They were still living there towards the end of the 4th century.

So what remains did the Romans leave behind? Precious few, sad to say, a few bits of glass and pottery, some of it made by potters from North Africa. You can still see where the granary stood, together with the barracks, all helpfully marked out on the grass. 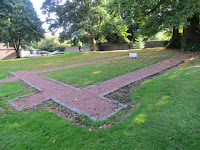 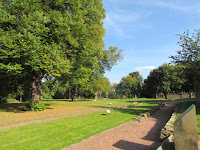 The most impressive find was the sculpture of a lioness attacking a bearded prisoner, brought to Cramond from Rome to act as a memorial to a Roman officer. It was  fished out of mud at the mouth of the River Almond in 1997 by a local boatman and is now on display in the National Museum of Scotland. 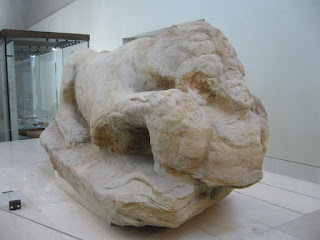 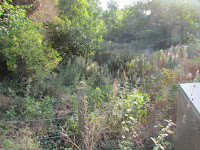 The photo on the right is of the site of the Roman bath house, outside the fort itself. It was discovered and excavated when the car park was built. It is apparently the best preserved bath house in Scotland but is being kept buried until the city council fulfils its commitment to erecting a visitor centre. 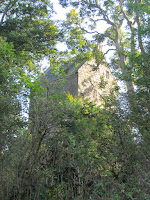 Also to be seen from the car park is a more impressive structure: the Cramond Tower. This tower house, built for a merchant in the 15th century, was  used as a summer residence by the Bishops of Dunkeld. Once a ruin it has now been restored as a private house. You can see it more clearly during winter. 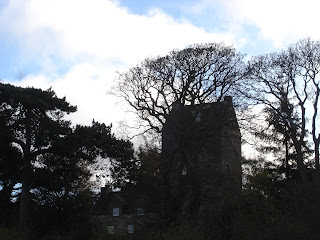 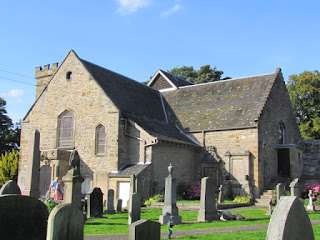 However, of the main part of the Roman fort - the principia or administrative headquarters - there is nothing to be seen. This is because the site is now occupied by Cramond Kirk. The regimental shrine used to be here and it is where the regimental standards used to be kept. It is also where the regimental pay chest would have been, placed close to the shrine to discourage theft, which would then have been sacrilege.

The Kirk itself stands where on the site of the praetorium, the general's tent or lodgings. After the Romans left, the Angles moved in, in AD 638. Christian worship also began to take place around this time, making use of the abandoned Roman fort.

By the 13th century, a church had been built, dedicated to St Columba and linked to the abbey on Inchcolm. The oldest remaining part of the Kirk is the tower (below), erected in the 15th century. 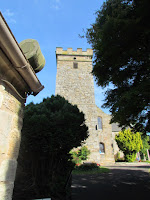 Cramond Kirk as it is now was founded in 1656, though stones from the Roman fort have been built into its walls, together with  bits of mediaeval masonry. The inside is very plain, built in a typical post-Reformation style but broad and spacious. Much of the woodwork goes back to the early years of the twentieth century. 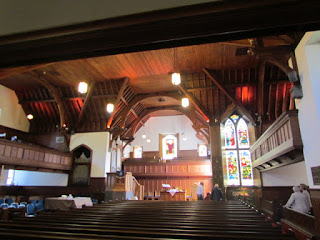 The most interesting features are the four galleries or lairds' lofts, at each of the points of the compass. The seats in these galleries were occupied by the local landowners, or heritors, and their households. The heritors were responsible for the upkeep of the Kirk. The gallery behind the Communion table belonged to Barnton House. The one on the left, facing the table, was for Cramond House, a mediaeval building which still stands across the grass from the Kirk. On the right, is the loft occupied by the family of the Earl of Rosebury who lived in Dalmeny House on the other side of the River Almond. At the back is the North gallery, the most recent, erected during the restoration of 1911.

However, like many of these plain post-Reformation churches, some of the most interesting features are the gravestones. They tell us so much about the ordinary parishioners, the merchants and craftsmen, the fishermen and their wives and children. On several you can still make out the symbols of the villagers' trades and professions, like the smoothing iron and scissors on the left. 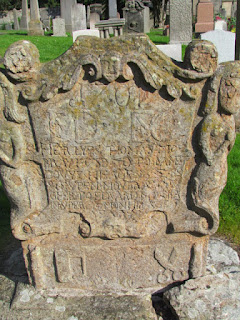 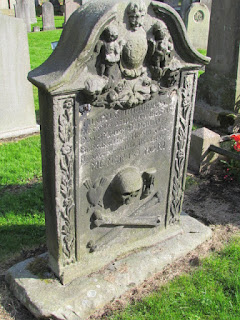 The momento mori, or skull and crossbones, reminds the visitor that he or she too must die. 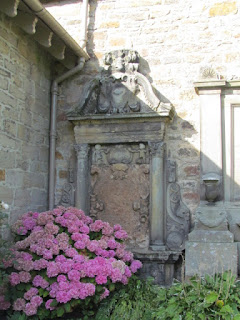 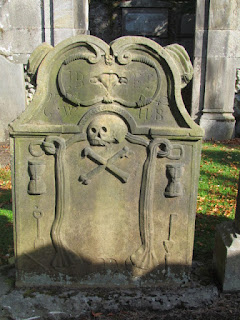 The tombstones of stonemasons, blacksmiths and hammermen are carved with spades, shovels, hammers and anvils. Memorials to the wealthy are attached to the wall of the Kirk itself. 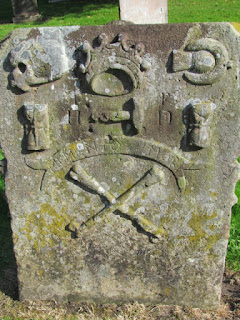 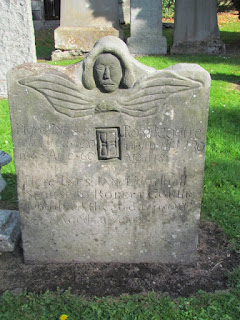 Cramond, once an independent town, became part of the City of Edinburgh in 1920. Its strategic significance remained right through the second world war. Fortifications from the time can still be seen on Cramond Island, as well as the concrete posts of the old causeway, built as a submarine barrier.

In the kirkyard, the sun lights up the old grey stones. Below them lie the bodies of some of the village folk who lived here over hundreds of years. Perhaps below their bodies lie a few even earlier inhabitants of this small settlement. Perhaps some of them were Roman, all of them are now anonymous.

And though the Roman sentry may often have shivered from cold and fear looking out towards the low hills of Fife, sometimes, gazing across the blue Firth of Forth on a sunlit spring morning towards the low mound of Cramond Island, sometimes, just sometimes he must have felt quite glad to be alive. 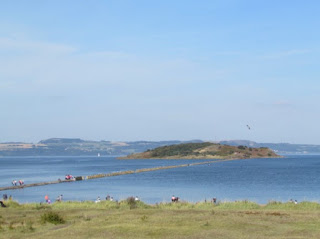 The information for this post came from the history of the Kirk by Gerald Morris, some of it reproduced in leaflet form. The book 'Cramond through Time' by John Dods and William Scholes, Amberley Publishing 2012, contains fascinating photographs from the past and the present.

You may also be interested in reading our earlier post Walking to Abercorn and recalling Philip Larkin.

Posted by Elisabeth Ritchie at 23:05