From Cramond to Cammo along the River Almond

Cramond wasn't always a desirable place to live. In our previous post, Cramond Kirk: building on what the Romans left behind, we sympathised with the shivering Roman soldiers watching out for rebellious tribes living on the other side of the Firth of Forth. Over the following centuries, generations of farming and fisher families crowded into pokey little cottages, most without sanitation. By the eighteenth century, they had been joined by millworkers from the village's ironworks, maltings and breweries, for the River Almond, like the Water of Leith, was an ideal location for such industries. Cramond village was part of the Cramond Estate and by the end of the eighteenth century the Estate had decided to move the village to its current location, where the River Almond flows into the Firth of Forth. 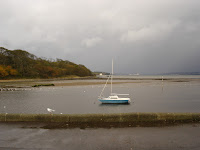 By the early twentieth century, the village had become a popular destination for daytrippers from nearby Edinburgh and even holidaymakers from further afield. Even as late as the middle years of the last century, there were photos of crowded beaches. donkey rides and people ambling along the promenade. Don't think of Blackpool when you imagine this promenade. It's basically a broad path with woodland on one side and grassy open space and sea on the other side. 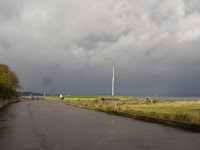 These days, the promenade caters for a rather different clientele: scores of joggers at any time during the week and mass groups on 'park runs' at the weekend. Here on the right is the promenade on a particularly wet day. And where do all these runners and walkers come from? Well, some come from elsewhere in Edinburgh but quite a few come from Cramond itself, for the village has become a very desirable place to live. Sailing boats tack to and fro. People are even talking of the famous Cramond ferry being reinstated. 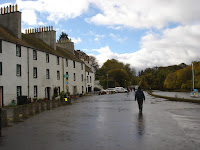 However, we are going to leave the promenade and the sea behind us and turn to the left, along by the river. The old village houses and pubs are on the left. On the other side of the River, the thick trees come right down to the water. Looking behind us, we can seen the mouth of the river, with the low dark line of Fife beyond, on the other bank of the Forth. Looking ahead we can see the trees closing in on both sides and the weir ahead. 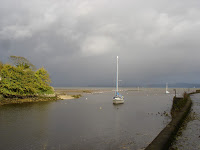 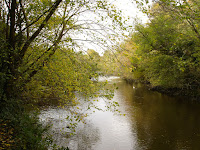 Every so often, you come across old mill buildings, some converted in homes and tea rooms, some left derelict. I think the building on the left below is Cockle Mill, once an iron mill, while in the photo on the right you may be able to make out the dark ruins of the Fairafar mill, which probably started work in the late seventeenth or early eighteenth century. Once it was used to grind grain. It also seems to have been used for waulking cloth, that is, soaking and felting it so that it shrinks and becomes thicker. Later on, it became a forge, making tools and the ironwork for traditional farming implements such as ploughs. 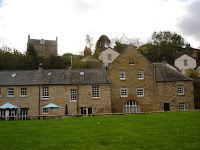 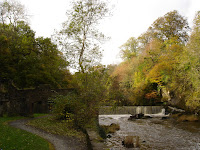 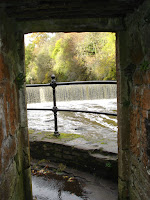 The riverside path runs right through Fairafar mill. The water thunders over over the weir. 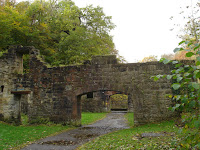 Beyond the weir, the water quietens down. 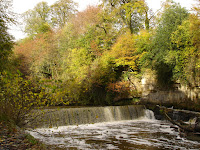 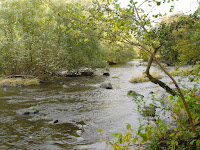 We pass along Dowie's Mill Lane. Like all the mills, Dowie's Mill used to use the water to power its machinery. It existed some time before 1697, the date its name appears in a charter. Like all the mills, Dowie's Mill manufactured different products at different times in its existence. It once ground grain, then became a sawmill making shafts and heads for spades and nails. Later still, it made upholstered furniture. In the photos below, you can see the workers' cottages.  Further along, you can still see the manager's house, now a private dwelling. (Sadly, no photo.) 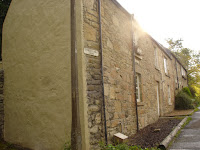 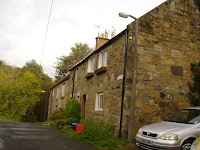 You  understand something of the force of this river, particularly when in spate, when you see the size of some of the tree trunks washed downstream. 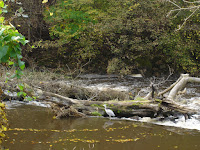 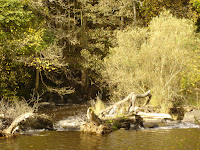 Ahead you can see the Auld Brig. built about 1500. 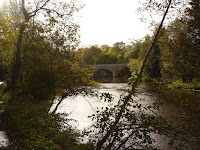 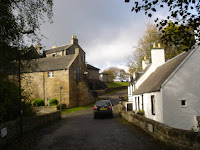 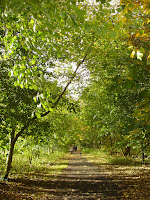 But we cross the main Queensferry Road and enter the Cammo Estate. It was originally owned by Sir John Clerk of Penicuik (to the south of Edinburgh), who lived from 1676 to 1755. He was a well known figure during the Scottish Enlightenment: Vice President of the Philosophical Society and friend and patron of the poet Allan Ramsay. Sir John was a man of many talents and, indeed, was the composer of several songs. He was a Whig politician as well as a lawyer, and supported the 1707 Act of Union with England. Sir John laid out the estate using his salary as Baron of the Exchequer for Scotland in the first Parliament of Great Britain, a post he held for the best part of 50 years.


Cammo Estate once had a lovely Georgian House which was still in existence in the 1970s. However, by then the estate had been much neglected and when the last owner died, the house burnt down. The City Council, which runs the estate as one of Edinburgh's parks on behalf of the National Trust, then sadly had to demolish it. You can still see the ruins of the house, however, on a raised mound surrounded by glorious woodland. 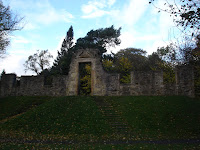 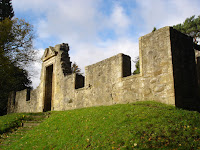 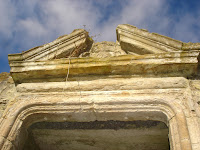 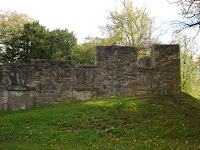 The house was designed to look out towards the Firth of Forth, though the views are somewhat obscured now. 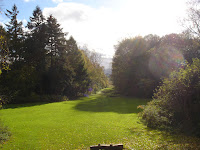 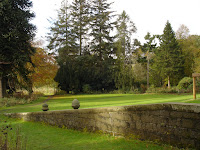 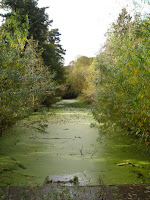 You can still make out some of the features of the original parkland, the stagnant pond, ruined piggery and stables. There is also a disused walled garden. 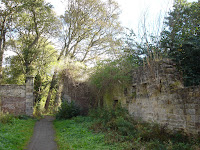 However, our walk has now come to an end. We have seen ruins of mills and houses and buildings which have been given another life in our own century. However, I would imagine that the River Almond itself looks little different from the way it appeared two or three centuries ago. Next time you're down in Cramond, take a walk along the river. It's worth it. 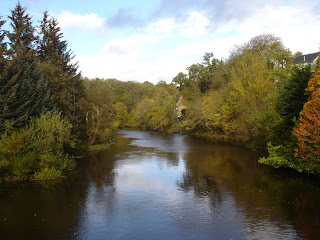 John Dods and William Scholes have produced a very interesting book of photographs comparing Cramond past and present: 'Cramond through Time', published by Amberley Publishing in 2012. I drew on it when writing this post.

Posted by Elisabeth Ritchie at 22:27