Commuting between one's castle in Edinburgh and one's stronghold in Stirling could be a pretty uncomfortable experience in the sixteenth century. With no M9, one was faced with a long bumpy ride on horseback or by carriage. Who wouldn't want to spend their down time instead in the royal palace at Linlithgow, with its lovely lochside setting and convenient location between the two famous fortresses? 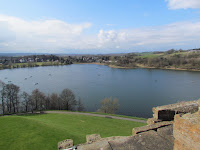 These days the pleasant commuter town of Linlithgow is about half an hour by car from both Stirling and Edinburgh and is served by the main Glasgow to Edinburgh railway line.  Even more reason for the modern-day traveller to stop off en route or spend a pleasant Sunday afternoon wandering through the square and up to the palace.You could even reach it by the Union Canal, if you so wished.

As soon as you arrive at Linlithgow, you are reminded of the fact that this isn't just any old town but a Royal Burgh which received its Charter in 1540. The main square is dominated by the Cross Well, a reconstruction in 1807 of a 1634 original. Behind it stands the old Town Hall, now the Burgh Hall, with its striking double stairway. It's a 1668 reconstruction of the original hall destroyed by Oliver Cromwell. In Linlithgow, even the reconstructions seem to be old! Indeed, you see all kinds of reminders of the past as you walk around, old doorways, old carvings, whatever has managed to survive. 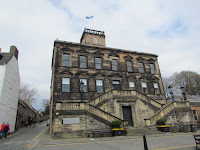 Sadly, not all of Linlithgow's modern buildings are in tune with their ancient surroundings. There are some terrible characterless blocks. Still, a good bit remains - or, at least - has been allowed to survive in some form. 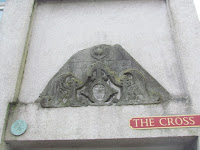 However, when you walk up the road to the palace, you forget the twentieth century infelicities. Here is the dramatic tower of the Parish Church of St Michael, founded in the twelfth century and rebuilt in the fourteenth. 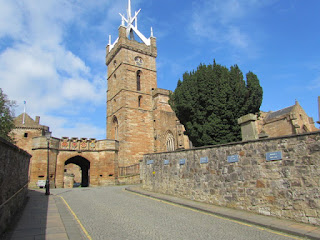 The impressive modern 'crown of thorns', created in 1964, is a replacement for the mediaeval original which was removed in 1821. Towers topped by crowns are a traditional feature of Scottish churches. You can see one at the High Church of St Giles in Edinburgh, for example.

It is well worth taking time to look around the church. My own visit this time was sadly rather hurried. 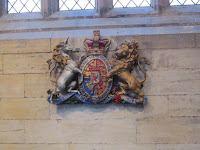 Over the centuries, various kings contributed to the church building. It was here that Mary Queen of Scots was probably baptised and various other monarchs, their courtiers and families worshipped. This church is one of those in which the National Covenant was signed. Here on the right is the Hanoverian coat of arms which was placed over the royal pew in 1746, about which, in true Presbyterian spirit, there is nothing special! 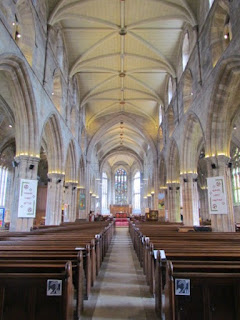 On entering, you are immediately struck by the elegance of the nave, with its delicate pillars, arches and ceiling. However, it hasn't always looked like this. In 1559, the interior of the church was knocked about by a Reforming mob, who destroyed its statues and altars. The splendid wooden reredos (the screen behind the communion table) still stands, though only the central statue of St Michael survived. Unfortunately, I haven't got a proper close up of it.

Yet not all the beauties of this church are old. On the right below is the wonderful Pentecost Window in St Katherine's Aisle by Crear McCartney, which was installed in 1992 to mark the 750th anniversary of the church's consecration. 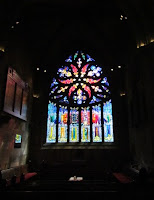 Like many churches dating from the Middle Ages, St Michael's has had a varied history and uses. In 1620, the Town Council used it to store timber and 25 years later, the nave was divided up into classrooms by Edinburgh University, which had decamped there following an outbreak of plague. In 1650, Oliver Cromwell's invading army stabled their horses in the nave after the Battle of Dunbar, when they took over the palace next door.

You approach the palace itself through the archway on the left of the church. It was built by James V in 1535 and it is his heraldry and symbols which surmount it. 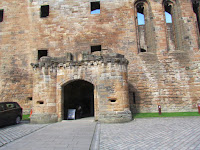 Once you have passed through the plain external entrance, also built in 1535, you find yourself in a beautiful courtyard. At the centre is a magnificent fountain, constructed by James V in 1538. 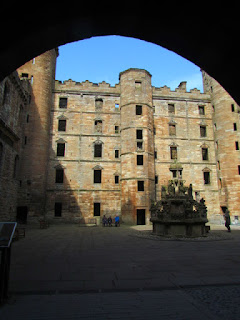 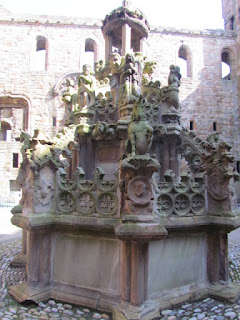 
The top of the fountain is capped by a crown. Around its three levels are carved grotesque heads as well as symbols of kingship, such as the lion and unicorn. 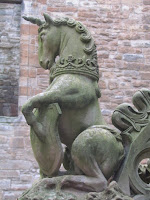 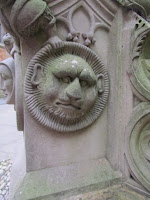 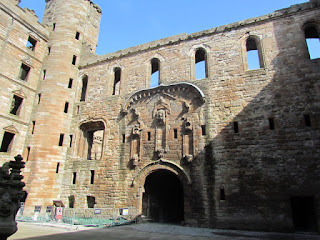 Look over to the right of the courtyard, however, and you'll see even older carvings over the above the East Entrance. This building dates back to the 1420s when the Stewart King James I rebuilt the original palace, following a fire which devastated the whole of Linlithgow.

In fact, the palace goes back even earlier than that, having been founded by David I in the middle years of the twelfth century. One monarch after another left his mark on it over the centuries. 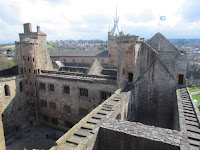 James IV built Royal Apartments on the south and west sides in the 1500s (left).While in 1620, James VI/1 rebuilt the north side with its elegant windows surmounted by national symbols of his royal lineage and the Union of the Crowns: the rose (England), the thistle (Scotland), the harp (Ireland) and the fleur-de-lys (France). 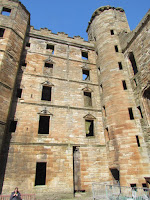 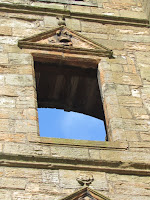 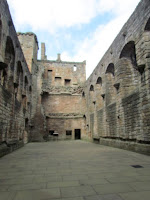 The Great Hall was built by James I and then extended by James IV, who also added a magnificent carved fireplace. 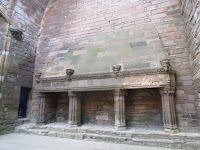 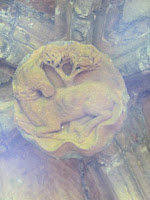 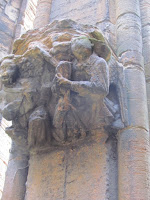 The palace still retains some of its original carvings such as in the chapel (right) where there are angels playing musical instruments. In James IV's bedchamber, the ceiling bosses, like this one depicting a unicorn, are still quite well preserved. 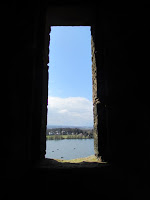 Of course, seeing an ancient palace like Linlithgow in its ruined state, doesn't really give you much of an idea of what it was like to live there. We have to remember that it was a 'pleasure palace'. From the upper rooms, the royal family would have had wonderful views of the loch and their park. Here they would have played games like tennis and held archery competitions and jousting. 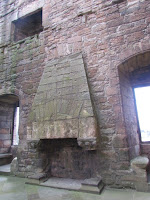 The royal apartments would have been furnished to the highest standards of comfort of the day. Walls would have been hung with tapestries to reduce the draughts. Fireplaces, like the one on the right which James V added for his new wife Marie de Guise, would have been gathering places for courtiers and family members. 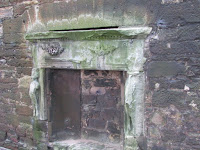 James V himself had been born in Linlithgow. He became king  when just a toddler, after his father, James IV was killed on Flodden Field. It was in Linlithgow Palace that his mother, Queen Margaret, herself a Tudor, waited for news of her husband's death. Below right is the staircase to Queen Margaret's 'bower'. 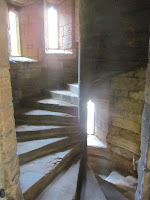 James V's daughter, Mary Queen of Scots, also born in Linlithgow, inherited the throne when only six days old. Her mother, Mary of Guise, took her to Stirling Castle for safety when she was just a few months old. She later sent young Mary to France during the Rough Wooing, fearing that she might be abducted by the English and forcibly married to Edward, son of Henry VIII. Mary Queen of Scots visited the Palace twenty years later, after her return from France. However, by then she had already made some terrible personal and political miscalculations, including her unfortunate marriages. It was not long after she left Linlithgow that Mary was abducted by and, possibly forcibly, married to the Earl of Bothwell, who was also implicated in the murder of her first husband, Darnley.

As everyone now knows, Mary paid for her misguided decisions with imprisonment in Lochleven Castle by her fellow countrymen, incarceration by her cousin Elizabeth when she fled to England and, ultimately, her life. Her son, James VI, who had been removed from her as a baby and who later became James I of England, brought his new bride, Anne of Denmark, to Linlithgow. However, the palace's days as a royal court were soon more or less over, particularly once the court moved down to London.

What the visitor sees in Linlithgow, then, is principally a sixteenth century holiday home, small by royal standards, but valued and cherished. Here the royal family came to relax away from affairs of state, though here sadness and trouble sometimes also followed them. 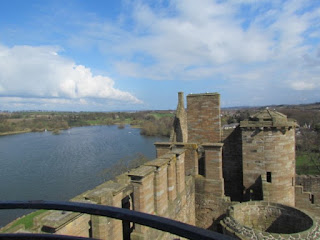 Looking out over the quiet loch and parkland, it can be difficult to imagine the noise, bustle and colour of the royal court. However, look down across the courtyard and there, out of the corner of one's eye one can almost catch a glimpse of the servants carrying the chests of clothing and unloading the supplies required to keep the household over the coming weeks. 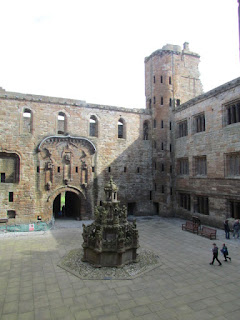 The end of Linlithgow Palace is a sad one. Bonnie Prince Charlie, the Young Pretender, made a brief visit in 1745, in his attempt to regain the throne for the Stewarts. Crowds gathered to greet him and the fountain ran with red wine in his honour. A year later, however, and the prince's fortunes had turned. The opposing army, led by his cousin, the notorious Duke of Cumberland, arrived at Linlithgow, some of them occupying parts of the palace. By the next morning, the building was on fire.The Town Council shrugged off any responsibility for saving it. Its furnishings disappeared into local houses, 'for safety'. It was never lived in again.

From one royal stronghold to another: a visit to Stirling Castle

Peterborough Cathedral and an unexpected encounter with two sad queens

Posted by Elisabeth Ritchie at 16:49