The Palace of Holyroodhouse, Mary Queen of Scots and the rest of the Stuarts

I'm not a great fan of Mary Queen of Scots. This is unfortunate for one early piece of advice I received about this blog was to mention Mary Queen of Scots as often as possible 'as Americans like it'. I have indeed tried to do this (see previous posts listed below), where it could be justified, though I am not convinced such repetition of itself increases the readership substantially. However, Scottish history is about far far more than that accident-prone queen, and so is the Palace of Holyroodhouse. Indeed, I have come across other people - Scots - who find her as irritating as I do.

Nevertheless, Holyroodhouse, home of our near-neighbour the current Queen Elizabeth, is so strongly linked to the fate of her sixteenth century predecessor that I have, rather grudgingly, succumbed. Here is that long overdue post.

The post is overdue for another reason. I took most of the photographs in May, hence the spring flowers, though most of the time in pouring rain. Since then I have been all over the world, but not very often in Scotland, leading to the delay in writing this post. I have decided not to retake photos in such situations. This is Edinburgh. Sometimes it rains. This is Scotland. Rain is to be expected. This blog would be completely unrealistic if every photo featured glorious sunshine. 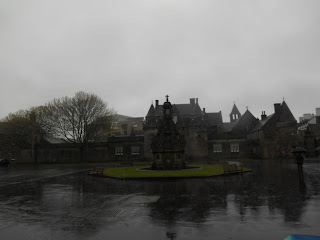 So, here goes. Why do I find Mary Queen of Scots irritating?

Well, some of it is not really her 'fault'. The tale of 'tragic' Queen Mary does tend to arouse some sentimental, indeed often mawkish, reactions. Her traditional image has been that of a victim, a woman manipulated by others, sometimes willingly, sometimes not. While I accept that women in sixteenth century society often lacked real choice, Mary did make some disastrous decisions, usually about the men in her life. When you are the monarch, sexual politics cannot be separated from national politics. Mary became Queen at six days old when her father, King James V, died during the Battle of Solway Moss, fighting against his uncle, King Henry VIII of England who had wanted James to break from the Catholic Church as he had done himself. Her mother Mary of Guise became Regent and navigated difficult political and religious circumstances as many of the Scottish lords were Protestants.

Following the Rough Wooing by King Henry, who wanted Mary to be betrothed to his son Edward, Mary of Guise sent her daughter to France. Religious allegiances and choice of  husband would affect every aspect of Mary's life from then on. Being fostered in other households was common practice for the children of noble families, though it must have been hard for such a young child to leave home and family and live in a foreign court, certainly for the first few years.

The Auld Alliance between Scotland and France was the backdrop to these events and given new lease of life with Mary's marriage to the Dauphin of France. It was also a key element in - and threat to - post-Reformation Scotland's relationship with England for France was, of course, Catholic. Mary was widowed very young, only a year after her husband had ascended the French throne. She then made two disastrous marriages, first to her cousin Henry Stuart, Lord Darnley, father of her son James, later King James VI of Scotland and I of England, and then to James Hepburn, Earl of Bothwell, who was implicated in Darnley's murder. Holyroodhouse, the subject of this post rather than Mary herself, is particularly associated with this period in Mary's life. 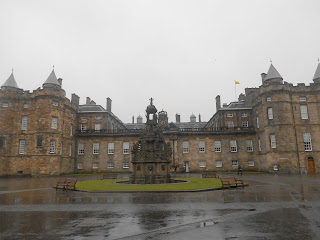 Only James V's tower on the left of this photo would have been occupied by Mary Queen of Scots, as the rest of the current palace was not built until after the Restoration of Charles II. Mary made good use of Holyroodhouse and, in fact, married both Darnley and Bothwell here. 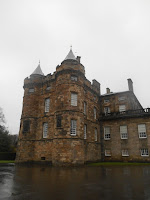 You can visit Mary's apartments, including the small room where it is rumoured that Rizzio, her music master and secretary was stabbed to death, reputedly by her second husband Darnley. I have been to Holyroodhouse on many occasions but this most recent visit was slightly disappointing because the old 'bloodstain' which has always marked the floor of this chamber has been been cleaned off. It was apparently a romantic Victorian embellishment. Sadly, you can't take photos inside, for very good reasons, so you'll just have to check it out yourself.

Also on that side of the building and 'behind' the tower, is the great gallery, still used by our current monarch.


The use of the Holyrood site, however, dates back well before the time of James V. It was James IV who carried out the early work, converting the royal lodgings at Holyrood Abbey into a residence for his new bride, Margaret, the daughter of Henry VII of England. Mary of Guise, Mary's mother, was crowned in the abbey church. Both the abbey and the palace were badly damaged by the English army during the Rough Wooing. However, the abbey was in use until the Reformation when it was dissolved and worship moved to a new church, Canongate Kirk, further up the hill. The ruins of the Abbey are still there, however, next to the palace. 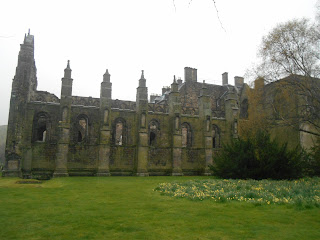 Holyrood means 'holy cross'. The story goes that King David I founded the abbey following a vision of a stag with a cross between its antlers. You can find lovely depictions of the stag on the outside and inside of Canongate Kirk. 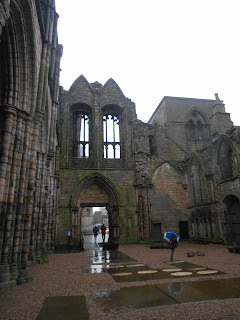 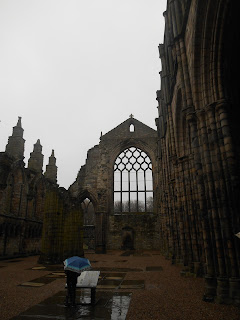 You can still make out the remains of the abbey buildings as you walk across the Queen's gardens. 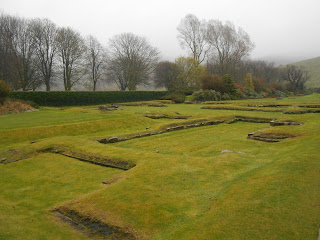 As in most religious foundations of the time, fugitives from the law used to claim sanctuary in Abbey Strand, here seen on a rather sunnier day. 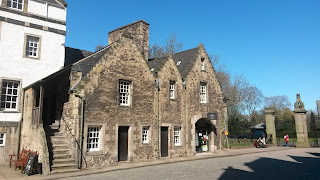 From Abbey Strand you can get a good view of James V's Tower through the great gates. (The old Free Church building on the right was built centuries later and now houses the impressive exhibitions of the Royal Collection.) 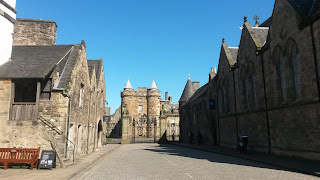 In 1590, Mary's son, James VI, married Anne of Denmark in the abbey, though that was long after his mother had been kidnapped by the Scottish nobles, forced to abdicate and had fled to England. Held captive by her cousin Queen Elizabeth for many years, she was eventually and reluctantly executed following her involvement in yet another plot to depose Elizabeth and make England Catholic again.

I have always admired Elizabeth I. She could not be more different from Mary. Elizabeth had also had painful childhood experiences, in many respects worse than Mary's. Her mother Anne Boleyn was executed when Elizabeth was a toddler and although her childhood appears to have been happy enough, her adolescence was difficult. By this time her Catholic half-sister Mary Tudor was on the throne and she was living a very restricted life in case she was used as a focus for Protestant rebellion.Unlike Mary Queen of Scots, Elizabeth did her best to avoid being manipulated by men, refusing to marry even though she clearly had intense relationships with some of her courtiers. She died childless, leaving the English throne to her nephew James VI of Scotland.

Once James moved the court to London, Holyroodhouse was no longer the centre of royal life. However, the palace and abbey were renovated for the coronation of James' son Charles I in 1633, although the service followed the English rather than the Scottish style. Charles continued to offend his Scottish subjects in matters of religion, leading to the National Covenant being signed in 1638. After Charles was executed, Cromwell defeated the Scots at the Battle of Dunbar and used the palace as a barracks. Some of it burnt down during that period.

Following the Restoration of the monarchy, Charles II extended the palace. Much of what we see now dates from that and subsequent periods. You approach the grand entrance from the Forecourt, passing an impressive fountain erected in 1859 and modelled on the far older one in Linlithgow Palace. 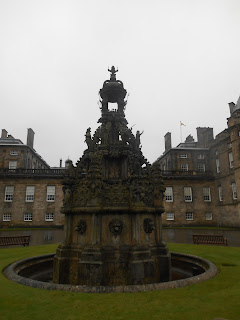 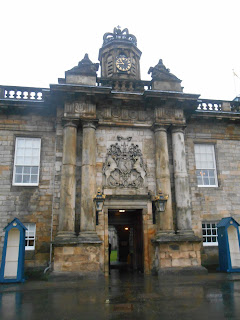 At the centre of the palace is a quadrangle. The facades of the building are built in the Doric, Ionic and Corinthian styles in order, a development which became common across Edinburgh in subsequent years. 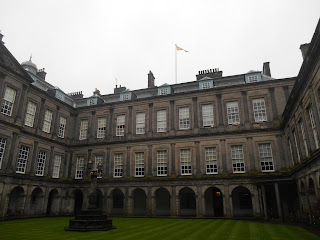 The elegant design can also be clearly seen from the garden and from the surrounding Holyrood Park, once the royal hunting ground. 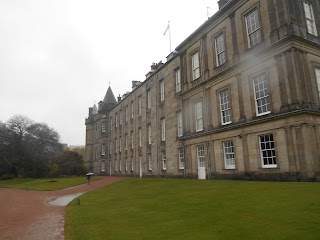 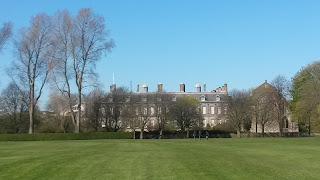 Holyroodhouse is part of the landscape of Edinburgh. Indeed, the site is surprisingly open, easily seen by walkers in the park or even casual passersby. As it's round the corner from our house, I pass it most days. The palace is still used by our current Royal Family, sometimes for low key unpublicised visits and, in particular, for the famous Garden Parties held to recognise the contribution individuals have made to communities up and down the country. In addition to art exhibitions, various other events such as poetry readings and lectures about the arts are held in Holyroodhouse. It has a nice tea room, good activities for children and a shop with some quite bizarre souvenirs. Royal Christmas tree decorations, anyone? Dogs' water bowls adorned with crowns? All in the best taste, however...

Mary Queen of Scots certainly wouldn't recognise the palace now, but then neither would she recognise the monarchy itself. While the son to whom she gave birth, James VI/I, became an able ruler, the Stuart family as a whole brought about the demise of their own dynasty through the excesses of their courts and the inflexibility of their religious and political beliefs.

The last time the Stuarts used Holyroodhouse as a royal palace was in 1745 after the Battle of Prestonpans, when Bonnie Prince Charlie, the Young Pretender, carried out official business and even held a ball there. The Jacobite Rebellion divided Scotland. As many Scots, most of them Protestants, fought for the Hanoverian George II, as for the Catholic Stuart prince. When Prince Charles left the palace for his English campaign, the soldiers billeted in Edinburgh Castle at the other end of the Royal Mile, sacked his apartments. A year later, when the rebellion was over, government troops defaced the portraits of the Scottish kings.

And Mary herself? She was certainly used and betrayed by those around her, including by those to whom she was closest. There is little doubt that she was a sad figure. However, she was also a very weak one. Give me strong Elizabeth I of England any day!


You may also be interested in the following posts, which touch on other events in Mary's life:

From one royal stronghold to another: a visit to Stirling Castle

Peterborough Cathedral and an unexpected encounter with two sad queens

Posted by Elisabeth Ritchie at 23:04