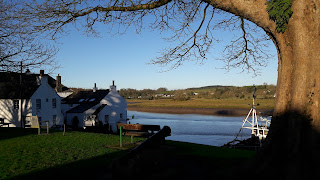 We were hardly surprised that the royal burgh of Kirkcudbright was empty and silent when we visited it on New Year's Day. The boats were tied up on the muddy tidal banks of the River Dee. Everyone was recovering from the night before. Nobody was out on the river or in the streets. 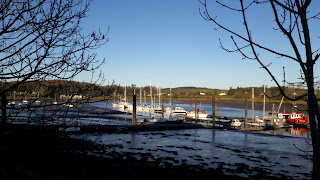 This small town has not always been so tranquil, however. Kirkcudbright and eastern Galloway used to be border territory and their history turbulent. Armies have moved back and forth across the Solway Firth. Castles have been built, besieged, sacked and demolished. Their occupants have been hanged and their property and land sequestered. Written history is largely about the fortunes of lords and landowners. What life was like for ordinary people, for farmers, fishermen and ferrymen caught up in events can only be imagined. It was unlikely to have been quiet. 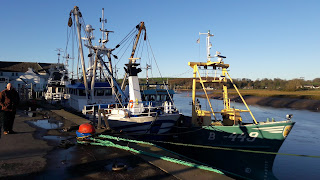 On New Year's Day 2017, however, the town was certainly quiet, only the occasional man or woman walking the occasional dog down its picturesque streets. Its modest terraced cottages, customs house and Tolbooth (below left, built 1625) have featured in many paintings by the Kirkcudbright Artists' Colony in the late 19th and early 20th centuries, and, indeed, today. In the past, however, the sword was wielded more often than the paint brush. Kirkcudbrightshire was the setting for many a power struggle. 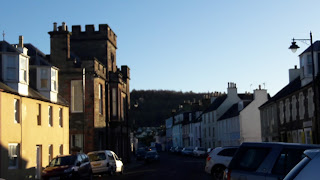 This area of Galloway was once part of Northumbria, a region of northern England, its inhabitants descended from Vikings and Picts. It was to Kirkcudbright that the body of St Cuthbert was brought for safety from Lindisfarne, the Holy Isle to the south of Berwick-on-Tweed, before being taken back down south. Kirkcudbright, pronounced 'Kirkcoobri', means 'chapel of Cuthbert'. 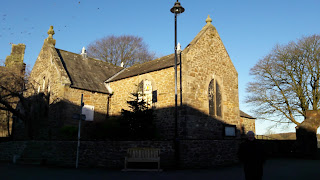 Franciscan friars established a settlement in Kirkcudbright in the twelfth century. Their name, Greyfriars, was given to the tiny chapel on the river bank which is all that survives of their convent. In the mid-sixteenth century, Mary Queen of Scots gave the ruinous buildings and their land to the Provost, Sir Thomas Maclellan of Bombie. He demolished them and in 1577 constructed an impressive tower house called, unsurprisingly, Maclellan's Castle. 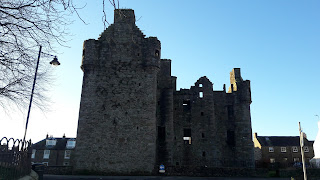 In the previous century, the Maclellans had been involved in the complicated rivalries among the Scottish barons and the Crown. Patrick Maclellan, Sheriff of Galloway, had refused to join the alliance led by the Black Douglas which plotted to overthrow young King James II, for whom the fifth Earl of Douglas was regent. The plotters were furious. Patrick was captured and taken to Threave Castle near Castle Douglas. 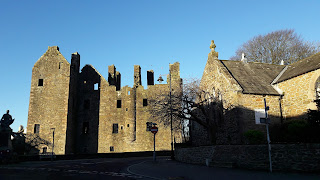 The story goes that Patrick Maclellan's uncle, Lord Andrew Grey, asked James II for a letter requesting that the Earl of Douglas release him. When Lord Grey's son, Sir Patrick Grey, arrived at Threave Castle with the letter, Douglas refused to open it until Patrick Grey had eaten. While Grey was at dinner, Douglas had Patrick Maclellan killed. When Grey was shown the headless body in the castle courtyard, he fled for his life.

The Earl of Douglas did not get away with the murder, however. King James invited him to Stirling Castle. Here he stabbed him in the neck, got his courtiers to finish him off and threw the body from the window. 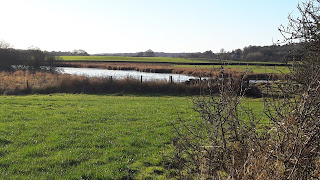 Bloody events but typical of the ruthless struggles for power at the time. Despite the horrors enacted within its walls, the setting of Threave Castle, Patrick Maclellan's prison, is beautiful and still surrounded by its extensive lands. To reach the castle, you walk through the fields, down tree-lined paths and along the river bank. There across the water lies Threave Castle. You ring the bell (summer months only!) so that a boat can be sent to ferry you across. 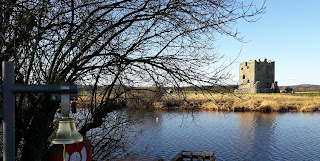 Threave was built in the 1370s by the wonderfully named Archibald the Grim, third Earl of Douglas, after he became Lord of Galloway. One earl succeeded another, none particularly wholesome or admirable. Eventually, James II, who had had enough of the family's arrogance, and of their plotting with, and manipulation of other noble families, stabbed the eighth Earl to death with his own hands.

The Black Douglas under the ninth Earl then rebelled openly against the Scottish king. They had improved the fortifications of Threave, using money received clandestinely from Henry VI, the English king.  However, they met their comeuppance in 1455 at the Battle of Arkinholm. One brother was killed in battle and his head presented to James; one was captured at the battle and executed; one escaped, was captured in England and then executed. That left only the ninth Earl who was in England at the time and continued to cause trouble until he was caught and imprisoned. His strongholds, including Threave, were besieged and his lands taken away from him and handed to his opponents, principally the Red Douglas,the family of the earls of Angus. 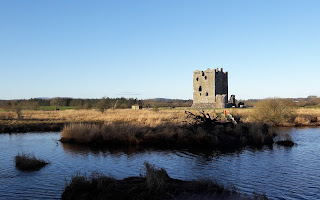 The precise border between England and Scotland was not determined for centuries and great lords like the Douglas, and even kings, moved back and forth across the area. In 1461, for example, during the Wars of the Roses, Henry VI of England crossed the Solway with his army and landed at Kirkcudbright, not to invade so much as to aid his wife Margaret of Anjou, who was in Linlithgow, on the other side of the country, trying to drum up military support for the Lancastrian side. 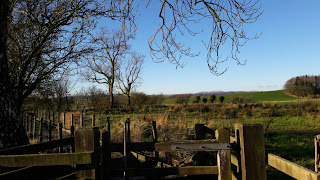 We are so used to tales of the conflict between Scotland and England as the two countries struggled to define themselves against each other, that we tend to forget that in the Middle Ages - and right through to the Battle of Culloden in 1746 - people aligned themselves with their local noble family as much as with any national grouping. Great families sided with both Scottish and English kings at different times in order to consolidate their own positions. The major conflicts were often among these families rather than between the nation states, which had not yet really been fully established. People we would now think of as 'Scottish' might support an English lord, or, indeed, vice versa, for a time anyway if it benefited them. For centuries, the Borders were lawless territory, and its people reluctant to follow the writ of any monarch. Their allegiances continued to fluctuate and no one's loyalty could be trusted for long.

Following the Union of the Crowns in 1603, when King James VI of Scotland inherited the throne of England on Queen Elizabeth's death, Scottish lords began to drift south to join the court in London. Robert Maclellan, a descendant of the Patrick Maclellan who had been murdered by the 8th Earl of Douglas, was one such Scottish noble. After a riotous youth which led to his imprisonment first in Blackness Castle on the Firth of Forth and then in Edinburgh Castle, he was actually appointed gentleman of the bedchamber to King James VI of Scotland/ I of England and Charles I, his son. He was rewarded with the title Lord of Kirkcudbright and, as a good Protestant, was given land in Ireland as part of the Plantation of Ulster.

However, history is complicated and the Maclellans, like other local families, were a force in the politics of both countries. As a Presbyterian, Kirkcudbright allied himself with the Scottish Covenanters who opposed attempts by Charles I to enforce the use of the English Book of Common Prayer in Scotland. So did his heir and nephew Thomas Maclellan, 2nd Lord Kirkcudbright who raised troops from among his feudal tenants and joined the Scottish army as it moved into England. Here they joined forces with English Parliamentary troops under Cromwell and fought the English Royalists at the Battle of Marston Moor. Subsequently, Kirkcudbright's troops were part of the Covenanter army which defeated the army of the Marquis of Montrose, mostly Highlanders and Irish, at Philiphaugh near Selkirk, in the Scottish Borders. Ruthless in their triumph, the Covenanters slaughtered prisoners of war, including the women and children accompanying the army as camp followers. It is sometimes difficult to work out who held the moral high ground in Scottish politics! 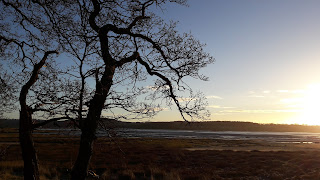 Galloway today is a beautiful and peaceful part of rural Scotland, geographically remote from the machinery of national government or international politics. Gazing across the Solway Firth, it can be difficult to imagine the great forces which once swept across it or the brutal political events and family tragedies which took place in its ruined castles. History is written about noble families and their fortunes. We often forget that it was the ordinary people whose crops were burnt, whose menfolk were conscripted into feudal armies, whose womenfolk were raped and children butchered.

Indeed, the cruelty of such warfare these days takes place in other countries, not our own. We look on at a remove, as horrified bystanders. Nevertheless, it is worth reflecting whether warlords such as the Black Douglas were really all that different in motivation or ethics from the warlords of today. We saw them operate in the Balkans; we see them still in Somalia, Syria and South Sudan. Imagine all that energy wasted, all that bloodshed multiplied across Scotland, indeed multiplied across the whole of the British Isles, as it used to be centuries ago.

In time, Scotland and England moved towards political union, a controversial decision, perhaps, but one taken in peacetime for largely economic reasons, not as the result of conquest. The skirmishes ceased. The private armies were disbanded. Remote areas were pacified. Roads were built. Taxes were imposed, some fair, some unfair. Individual differences diminished but did not disappear. Scottish culture flourished and the country became a centre of learning for the whole of Europe. Although I love visiting castles and peering down from their battlements, I am not nostalgic for the bloody events which took place around them or the divisions which are symbolised in their stonework.

Tranquillity, peace, quietness. We are a fortunate nation these days.

Posted by Elisabeth Ritchie at 17:51