When I was a young girl, my family would make an annual journey from our Lancashire mill town to Annan on the Solway Firth to meet old friends who had travelled south from their home in Troon on the Ayrshire coast. My earliest experience of Scotland, therefore, was not of Highland glens and mountains, tiny East Neuk fishing villages or grand Aberdeenshire castles perched on perilous cliffs. Instead, it was of that strange flat landscape of mingled sea and water which characterises much of the region now called Dumfries and Galloway but originally made up of small individual counties such as Wigtonshire, Kirkcudbrightshire and the area known as the Stewartry. 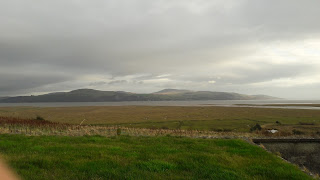 The Solway Firth both fascinated and appalled me. My parents told us how the tide would creep swiftly across the salt marshes, catching unawares those unfamiliar with its dangers. In particular, they told us the story of the Covenanting martyrs, drowned in the Solway mudflats as a punishment for refusing to recant their beliefs and swear an oath of loyalty to the Stuart monarch, King James VII/II. In our family, not only did we have little truck with kings, but our father was a Presbyterian minister, so there was little doubt where our sympathies ought to lie. This was despite attempts made by our Anglican primary school teachers to brainwash us about the 'rightful' reign of the Stuart kings and the wicked execution of King James' ancestor, Charles II, who they told us had been 'appointed by God'. (Cue guffaws from my republican family.) As for me, I was both thrilled by the romanticism of the story of that 'martyr king' and his swashbuckling family, and uncomfortably aware that my own family would have supported the Parliamentarian side and, given half a chance, wielded the axe themselves! 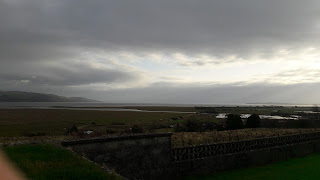 The story of the Covenanters and the Stuart reign is a complex mix of religion, politics and dynastic inheritance - and of course, romantic legend. However, what happened then is essential to any understanding not just of the history of that time, but also of our own more recent debates about Scottish sovereignty. So here goes. (Just skip the next couple of paragraphs if you wish.)

The Stuarts had been kings of both England and Scotland, since their forebear, King James VI of Scotland, inherited the throne of England following the death of Queen Elizabeth I, thus becoming also James I of England. The Stuarts believed in the Divine Right of Kings, a concept few Scots Presbyterians could accept, believing as they did in the supremacy of Jesus Christ as the head of the Church. Almost as bad, Charles I, son of James VI/I, also believed that he should be the head of both the Presybterian Church of Scotland and the Episcopalian Church of England. He proceeded to introduce the English prayerbook into Scottish churches, leading to Jenny Geddes' protests in the cathedral of St Giles in Edinburgh in 1637, and rioting across the country. Charles also tried to reinstate the role of bishops in the Scottish church. In 1638, Scottish Presbyterians reacted by signing the National Covenant in Greyfriars Kirk. The Covenant proclaimed the separation of the Scottish church from its English counterpart and the status of its own prayerbook and distinct form of church governance.

In 1651, Charles II actually signed the Covenant himself, in an attempt to gain the loyalty of Scots in his struggles against Oliver Cromwell. However, in 1660 pressure from his own government led him to renege on his pledge. Scotland was divided. Judges and magistrates who supported the Stuart king were ruthless in punishing disloyal Covenanters by imposing fines or banishing them to the West Indies and America. Finding them resistant to these modes of persuasion, the authorities then started using torture and execution. This period of Scottish history, about fifty years in all, is called the Killing Times.

So what has all this to do with the Solway Firth? 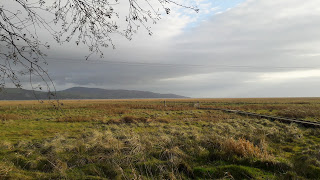 In 1684, the three children of a Wigtonshire farmer, George Wilson, started attending illegal 'conventicles'. Wilson was fined and his children - Margaret aged 18, Thomas 16, and Agnes 13 - fled into the Galloway hills to hide from the soldiers. The two girls then went to Wigtown to visit some fellow Covenanters, including Margaret McLauchlan, a widow in her sixties. There the two young people and Mrs McLauchlan were arrested, allegedly having been betrayed. Refusing to swear an 'oath of abjuration' and proclaim their loyalty to the King, they were sentenced to death by drowning. The girls' father sold everything and borrowed from friends, to amass the huge sum of £100 with which to buy their pardon at the court in Edinburgh. There he was told to choose which of his daughters he would save. He chose the youngest, Agnes. 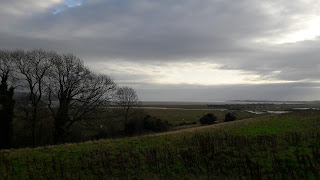 The eldest daughter, Margaret, and Margaret McLauchlan, were tied to stakes driven into the broad expanse of sand in Wigtown Bay on the Solway Firth. Young Margaret was tied up nearer the shore, in the hope that seeing the older woman drown first as the tide came in, she would recant. She did not. It is said that she sang Psalm 25 as the water reached her, refusing even to pray for the King when the soldiers held her head above the waves. She was then left to drown. 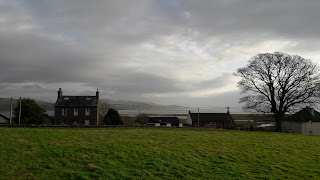 This terrible story was imprinted on my mind all those years ago not just by my parents' retelling but also through a fictional account which I read at that time. I can no longer remember the title or the writer, but I do remember the absolute horror with which I relived the gradual creeping in of the tide and the desperate gulps of the victim as her head sank beneath the waves.

It was inevitable, therefore, that returning to the area a couple of days ago, I should endeavour to track down the origins of that story which haunted my childhood dreams. The small town of Wigtown still looks out over the wide salt marshes of the Solway, though they have silted up following the diversion of the channel which used to run into the town's harbour, now a car park. So, Wigtown no longer has much in the way of sand, but instead acres of boggy tuffeted grassland stretching out towards the water. Here I was on the first day of 2017, a day by turns of frost, lowering clouds and bright sunshine. Would that ancient story still have the resonance for me today that it had for that little girl nearly sixty year ago? 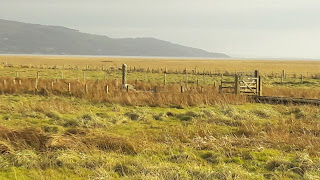 I must say that I was quite pessimistic about the chances of finding many reminders of the Wigtown martyrs. There were few references to the story in tourist literature and online accounts were minimal. Wigtown is remembered these days as 'Scotland's  National Book Town', a designation assigned in an attempt to address the rural deprivation of the area. The closing of the railway line had led to the shutting down of its only industries, a creamery and distillery, leaving Wigtown in a pretty desperate state. These days, however, its pleasant well-kept streets are lined with independent book shops and attractive eating places. The town even hosts an annual book festival. The distillery, Bladnoch, has even reopened. Well done, Dumfries and Galloway Council! 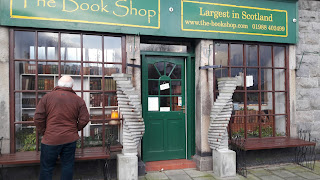 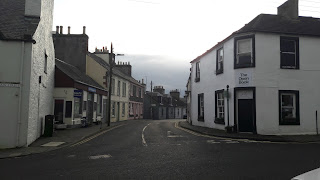 However,  my pessimism about finding any remembrance of the martyrs was unfounded. Halfway down the hill which leads to the water's edge, lies the old kirk of St Machutus, a sixth century Celtic saint. It was originally founded by the priory of Whithorn, though rebuilt several times. The churchyard contains ruins of some of the old buildings. 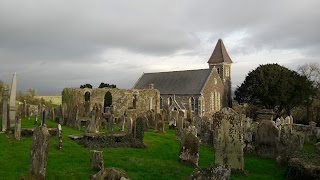 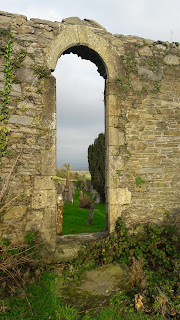 Here you can find the memorials to the Wigtown martyrs. Mind you, it took me some time as the graveyard is filled with monuments. However, there they were, low stone monuments to the two martyrs, together with a stone recording the deaths by hanging of three men also convicted as Covenanters. 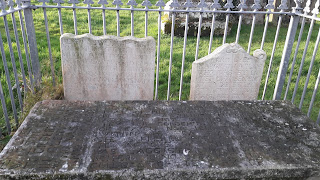 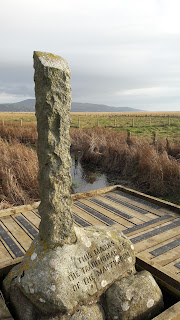 At the bottom of the hill and reached by a short causeway, stands the memorial to the 'two Margarets', a stone representation of the original wooden stake to which they would have been tied.

I was impressed by the account inscribed on a nearby information board. Discussions of religion can often be difficult in the west of Scotland, where religious divisions are still alive, though, one hopes, fading somewhat. The inscription notes the organisations which had contributed to the erection of the monument, followed by the words:

'...in recognition of the bravery of those who suffered for their beliefs because they would not bow to tyranny. Please remember all those made to suffer for conscience's sake.' 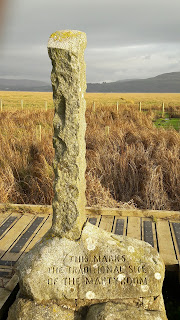 These words make what could have been a divisive relic of an ancient and bitter conflict a memorial to all those made to suffer for their religious or political beliefs. We need such reminders as much these days as in the past, particularly as we remember the Yazidis of Syria, the Christian community of Pakistan, the Coptic church in Egypt, the Muslim Rohingya of Burma among many others who are persecuted for their beliefs. What mattered in 1685, still matters in 2017: that all people should have the right to live and worship according to their beliefs and customs, and without restricting the freedom of others to do the same.

As I stood looking over the Solway marshes, the sun came out.

A Happy New Year to you all, and may this year bring freedom of thought, action and belief to people across the world.

Other posts which refer to the Covenanters include the following:

What were the Scots doing in Barbados, and how did they get there?

A walk round Edinburgh's Parliament Square and St Giles: power to the Princes, the People or the Prelates?

Greyfriars Kirkyard: the burial place of the great, the good and the completely unknown

Posted by Elisabeth Ritchie at 09:11