Tombs with a view: Cairn Holy 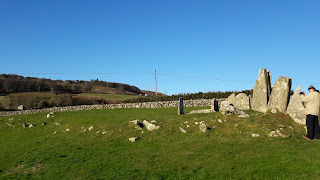 It is 5,000 years or more since the dead were laid in their hilltop tombs at Cairn Holy, near Gatehouse of Fleet. Nevertheless, the place has maintained its sense of the otherworldly. Over the intervening years, local people remained aware of the site's connection with the other world, which is why they gave it its name: Cairn (mound of stones) and Holy. This was and, perhaps still is, a holy place.
Of course, standing stones and chambered tombs are ten-a-penny in Scotland, but they never fail to impress. 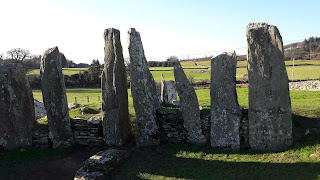 Not that such tombs were meant to look like this, their jagged teeth pointing to the sky. What the visitor can see today at Cairn Holy I, the first of the tombs, are just the supporting stones of what were once a flagged roof and a mound of covering stones. It would have taken hard work over several seasons for the original inhabitants of the area to gather, shape and raise the stones. Alas, over the following millennia, while the locals, some of them perhaps even descendants of the builders of the mound, might have recognised that it had some sort of 'holy' significance, that didn't stop them stealing the carefully worked stone slabs and using them as fence posts.  So you need to use your imagination to rebuild in your mind's eye what these impressive tombs might once have looked like. 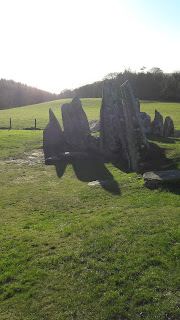 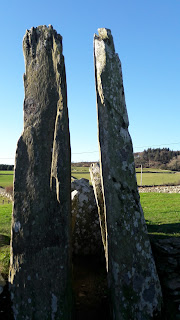 Gazing towards the midday sun (above left), you can see its rays penetrate the gap in the stones. Stepping over the entrance slab, one peers through the dark cleft into the inner chamber. Was it intended for one community leader or for a family or a group of villagers? Who knows. Its dead occupants have long since rotted away, even their bones absorbed into the peaty earth. 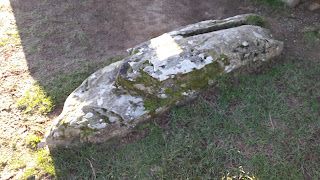 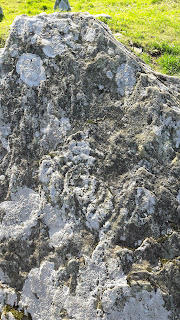 Don't get me wrong. I'm not trying to suggest that Cairn Holy is one of the greatest neolithic monuments in the British Isles. It is a not a Newgrange or a Maes Howe, with their magnificent architecture and finely worked masonry.
Apart from its attractive setting, the tomb is mainly notable because of a spiral carving on one of its stones (left) and cup and ring marks in the dark inner chamber. The most significant find, however, was a piece of jadeite found burnt in the entrance chamber. Other evidence of fires was found in the forecourt, perhaps lit for ritual ceremonies. The green polished stone had been a ceremonial axe, recently on display with other similar jadeite axes in the National Museum of Scotland in Edinburgh. What is quite startling is the fact that the stone from which the axe was made was quarried in the High Italian Alps and brought to Scotland by migrating farmers as they moved across Europe or, perhaps, passed it from settlement to settlement. The island of Britain was an intrinsic  part of Europe even then, international in its outlook and contacts, its peoples crossing physical boundaries in those days before national borders existed.

The fact that such a significant object existed here in Galloway, suggests that its owner was wealthy and powerful, a leader of his people. Apart from this holy object, other artefacts found during excavations are less unusual: pieces of Beaker pottery and an arrowhead, emblems of the community's everyday lives but some perhaps dating from later than the tomb itself.
The second tomb, Cairn Holy II, is simpler than Cairn Holy I. However, it has a rather more impressive setting, high on the moorland of the hill of Cairnharrow, looking down towards the sea. 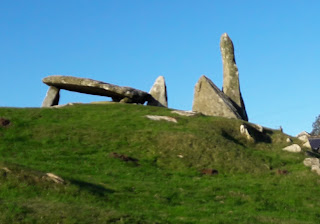 This tomb also has two chambers, but so comprehensively robbed that only a few shards of pottery remained when it was excavated. 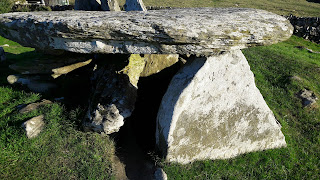 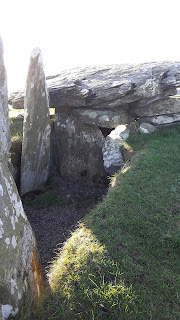 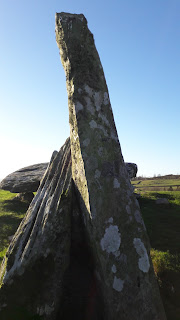 People used to think that Cairn Holy II was the grave of Galdus, a semi-mythical leader who fought against the Romans. Alas, no. That would be a nice story. No, Cairn Holy is much much older than that.

There it stands, reminding us ot oly that death comes to us all, also that all societies, all cultures and all civilisations also eventually come to an end.

I am writing this on the day of Donald Trump's inauguration. The sense of fear and foreboding is palpable across most of the countries of the world. He did nothing to reassure us in his insular, confrontational and nationalistic speech. 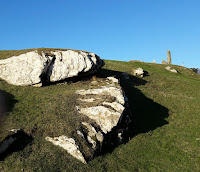 One of Scotland's most famous novels, Sunset Song by Lewis Grassic Gibbon, begins and ends at the neolithic Standing Stones on the moorland of the Mearns in north-east Scotland. The novel reminds us that all things pass. The land, however, says Grassic Gibbon will remain, unaware as his generation were, that these days even the land is threatened.

Donald, you too will pass. The world you wish to create is not one in which most of us would want to live. As one commentator put it, the 21st century under Trump may be very short indeed. 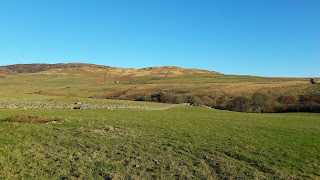 Let us finish with some of the last words of Sunset Song, reflecting on the horrors of the First World War and struggling to find hope for the future.

'So, lest we shame them, let us believe that the new oppressions and foolish greeds are no more than mists that pass. They died for a world that is past, these men, but they did not die for this we seem to inherit.'

The sun shone down on Cairnharrow. The dead, or what was left of them, lay quiet in their graves, reminding us that these things too will pass.


You may also be interested in the following post:
Exploring a prehistoric landscape: Machrie Moor Standing Stones
Posted by Elisabeth Ritchie at 18:09