A brief walk along the Via Francigena to Settimo Vittone

We sometimes speak of ourselves and our contemporaries as if we were the first truly international generation, a flimsy assertion usually based on an annual two weeks in Torremolinos and a second cousin working in Brussels. Tourism is easily mistaken for travelling. In our ignorance, we forget that we are the descendants of eighteenth and nineteenth century soldiers, engineers and civil servants who claimed, developed and exploited countries across the globe. We forget that a thousand years before that, the Vikings traded with Russia and left their  runic inscriptions (Olaf woz here, or similar) in Constantinople's Hagia Sophia. Above all we forget the existence of the great pilgrim routes of the Middle Ages which once crisscrossed Europe, indeed, once crisscrossed our own British Isles. 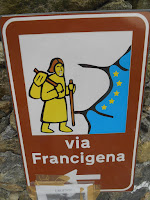 Some of the old pilgrim trails have been revived, for example, across the Scottish Borders.Other routes have never entirely gone out of use, like the Via Francigena, which once connected Canterbury with Rome, Northern with Southern Europe. The Via Francigena leads across the English Channel, through Picardy in France, through Switzerland by means of the St Bernard Pass to Italy. From the Aosta valley, the route continues through the Po valley, down the Apennines, past mediaeval Tuscan towns like Lucca, San Gimignano and Sienna until it reaches the well-worn roads of the holy city of Rome. The two thousand or more kilometres of the Via Francigena can be walked in roughly six weeks, its route marked by modern signposts or simple splashes of paint. 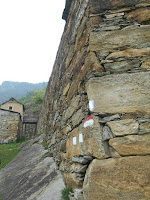 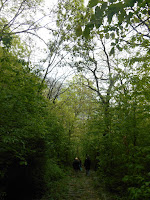 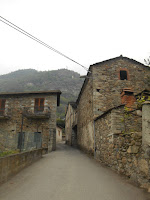 We joined the the Via Francigena for a few kilometres near Settimo Vittone in the Aosta Valley of Northern Italy in the late spring of 2015. (It has taken me this long to write the post!) The route took us through mediaeval villages, beside the walls of ruined castles, by ancient springs and among pastures and forests. 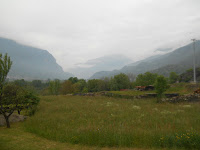 The country might have been Italy, but the air held little warmth. The Alps were still mostly covered in snow and the streams full of melt water. Clouds hung heavy on the foothills and the air was damp. 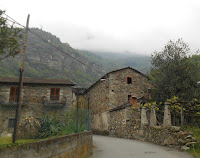 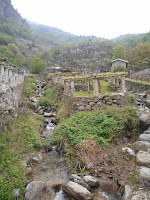 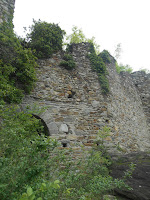 Every so often, ruins surprised us as we passed an abandoned hamlet or looked up at the walls of a crumbling castle. The roofs of derelict cottages sank further and further into the ground. 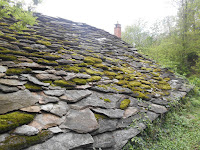 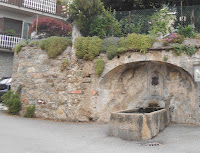 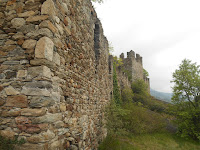 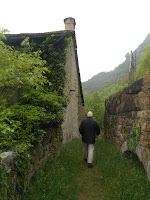 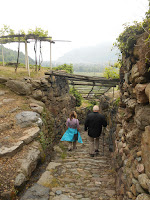 The path occasionally joined a metalled road as it wound through a village but a lot of the time it crept along the hillside, its cobblestones now long grown over. 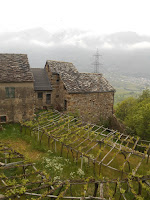 This is winemaking country and the old columns which used to support, and sometimes still do support, the vines studded the landscape. The hills were marked by ancient terraces. 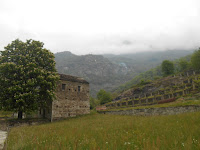 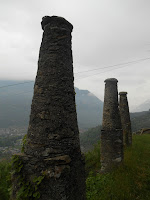 We turned off up the hill, following a cobbled
path where it skirted round the edge of the village of Settimo Vittone. Old houses, once grand but now empty and abandoned looking, came into view. I wonder how the pilgrims used to be greeted as their aching limbs mounted the slopes. Did villagers respect their devotion or did they regard the pilgrims as 'scroungers' who avoided earning their own living by begging from others? 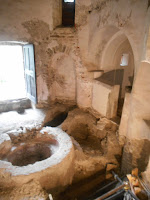 Only a few yards more and we arrived at an open area, surrounded by what would once have been the fortified walls of a modest castle, high above the surrounding plain. We had arrived at Pieve di San Lorenzo, the parish church until 1661 when a 'new' church, dedicated to San Andrea, was built down on the plain.

Together, the baptistery of San Giovanni Battista and the Church of San Lorenzo are among the most important examples of pre-Romanesque architecture in Piedmont.

The ninth century baptistery, restored in the 11th century, was being excavated when we visited. The baptistery is the octagonal building on the left of the photograph. You can see the excavation of the baptismal pool in the picture on the right. 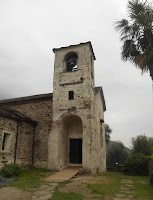 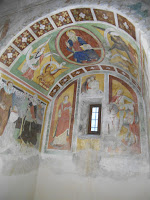 Step inside the tiny chapel and you are surrounded by colour. The frescoes were painted at various periods, the earliest being those in the apse which date from the 12th century, the Romanesque period, .

Painting continued during the 13th century and right through to the end of the 14th century. You can track the developing styles around the chapel walls. 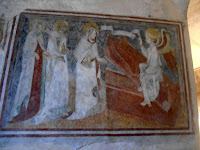 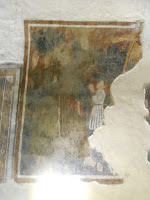 Those deep jewel-like colours covering every inch of plasterwork in that cramped space must have almost overwhelmed the pilgrims' senses. In Britain, we have retained some understanding of the worship of God through music. However, since the Reformation, the walls of our parish churches, in England and especially in Scotland, have almost all become empty of colour, despite so many of them having been painted in the past, perhaps even with art similar in quality to the beautiful frescoes of Settimo Vittone. 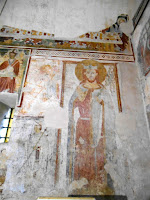 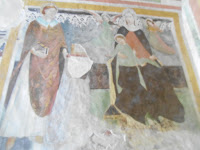 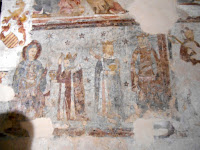 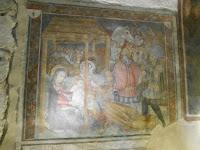 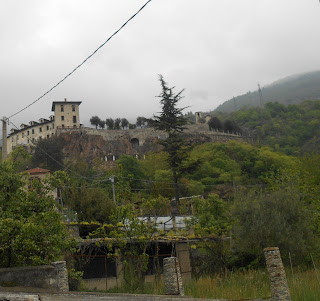 Subdued by what we had seen, we slowly left the church and made our way down through the old village and round below the escarpment on which it stood. In the photograph on the left, you may just be able to see the baptistery and chapel on the far right of the castle walls.

Our Scottish Calvinist backgrounds are poor preparation for the customs and rites of Continental religious tradition. Yet, treading those ancient paths, if only for a morning, as they wove in and out of hamlets and skirted aged vineyards, gave us some sense of the pilgrims' contemplative yet sociable lives as they walked steadily but slowly, in company or alone, ever onwards to the next way station, the next shrine. Perhaps some of them even sought through their prayers to influence public events, as well as achieve salvation for their own souls. Perhaps they tried to discern, or perhaps impose, some pattern on the harshness and chaos of their lives amidst the power struggles between city states and an ambitious and powerful nobility. For hundreds of years, private armies used to sweep across Europe, epidemics destroyed millions, ordinary people suffered lives of backbreaking drudgery. Perhaps following the pilgrims' way enabled you to exert just that bit of control, to steer your direction. Pilgrims at least knew where they were going and why. How many of us can confidently say that of our own lives, even today?

Posted by Elisabeth Ritchie at 17:37