It was pelting down when we visited Portpatrick. The clouds lowered and the sky seemed to meet the hills. It was difficult to believe that the Gulf Stream washes its shores, giving it what some have described as a pleasant sub-tropical climate. Well, perhaps.... 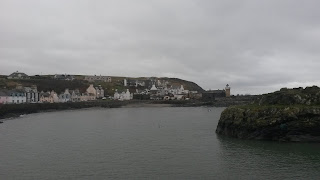 For the next couple of days we battled against the rain, snatching photos when we could. You will find many more attractive pictures of Portpatrick on the various tourist websites; however, situated where it is on the Solway Firth in the far south west of Scotland, it would be surprising if visitors didn't occasionally encounter rain. 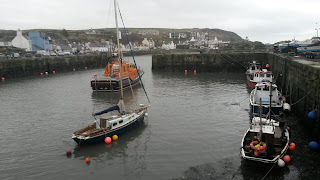 The pretty pastel-coloured cottages looked a bit downcast in the dreich January weather, but they were probably not intended to be colour-washed anyway. Scotland is full of stone cottages which have been painted white, pink and blue because that is what tourists expect from their visits to Cornish fishing villages. 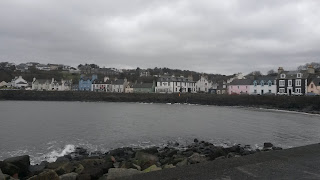 In the harbour, the orange of the fishing tackle brightened things up a bit. Two or three hundred years ago, Portpatrick was an important port for ferries carrying people, post and goods to and from Ireland.You can actually see the coast of northern Ireland from the cliffs. Indeed, young people even used to cross over to Portpatrick in order to get married as it was said that the local Church of Scotland had rather laxer rules than the churches back home. Apparently you could get off the boat, do the business and re-embark within an hour: 'quickie' weddings, indeed. 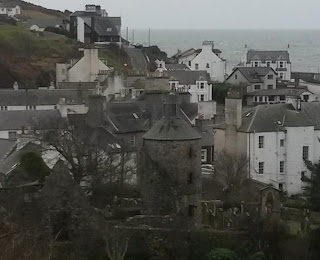 Scotland tends to have a less sentimental attachment to its old churches than England. Many ancient structures are left to go to ruin and replaced by the kind of solid practical structures which the Victorians and Edwardians preferred to worship in. Larger and often quite prosperous looking, they put the old ruins quite literally in the shade.

However, the old tower of the ruined St Patrick's Church has survived, though not the much earlier chapel which preceded it. The ruins of the Old Parish Church date from 1629 and the tower itself from about 1520. The tower would originally have been far more impressive, standing on its own without the huddle of houses around it. It looks very like an Irish round tower, or like the one in Brechin, which was also influenced by Celtic architecture.  You can imagine that the tower would have been a very important landmark by which to steer and, perhaps, even an early kind of lighthouse. Certainly a lighthouse would have been needed, given the many nearby memorials to those drowned at sea. You can also see why the harbour was constructed where it is, in a sheltering cleft between two sets of cliffs.

A different kind of protection altogether was provided by Dunskey Castle, which overlooks the bay and can be reached by a gentle walk along the cliffs. Dun means 'castle' and key means 'quay' - the castle which defends the quay.

Built around 1500, the castle looms before you as you tramp along the path, barely distinguishable from the heather and grass by which it is surrounded.

The Castle is basically a sixteenth century tower house, looking out over the sea, with not much else in the way of residential accommodation. It was originally built in the 1400s for a family called Adair  before being destroyed by another powerful local family, the McCullochs. It was rebuilt at much the same time as the houses in Portpatrick itself were being constructed. 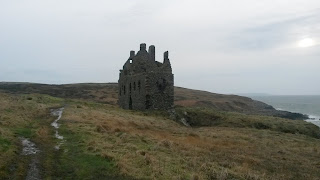 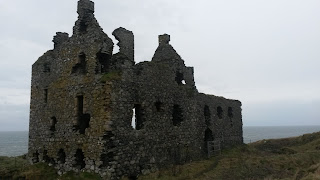 The sea provides the castle's main form of defence, for the cliffs rise high at this point. However there are also the remains of a defensive ditch and some other ruinous structures in the vicinity. Nowadays, Dunskey Castle is far too dangerous to go inside as it was abandoned some time in the late 1600s and already derelict by about 1700. 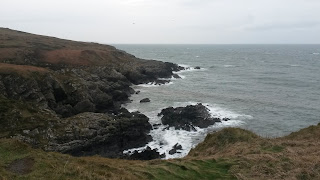 These days, when you look at a map, Portpatrick seems very isolated. However, that was not really the case in the past. In the nineteenth century, in addition to the ferry sailings to Ireland, there were steamers south to Liverpool and the Isle of Man and north to Glasgow.

A railway line used to link Portpatrick with Dumfries and Stanraer and there was even a little line from the station to the harbour. No longer, alas.

However, you can always travel on foot if public transport lets you down. Perhaps not by the old military road built in the 1760s, which goes to Bridge of Sark on the English border via Dumfries, but the Southern Upland Way may be an option: 212 miles from the cliff path above Portpatrick to the south east coast on the other side of Scotland.

But why would you bother? Forget the wind, forget the rain, forget the clouds. Portpatrick is a lovely place to visit whatever the weather. And in the sunshine, well just use your imagination. 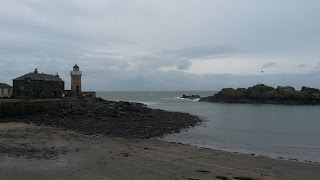 Posted by Elisabeth Ritchie at 17:32