Surprised by beauty in Chelmsford Cathedral

I was just filling time, really. Essex isn't really my stamping ground; indeed, my first ever visit to the county was just last week, for my aunt's funeral. With an hour or two to spare, the obvious place to drop into was the Cathedral, whose bells had pealed out a glorious welcome as I got off the train the evening before.

Now, when I write 'Cathedral', don't get too excited. Chelmsford isn't one of England's great architectural treasures. It's not a Durham, a Wells or a Lincoln. It is really just a jumped up parish church, having only become a cathedral quite recently, in 1914. Just looking at the outside, you can tell it's a basically a large, though attractive, parish church, set in a pleasant churchyard, a little oasis of quiet off a busy shopping centre.

English towns and villages are like that. Every settlement seems to have its mediaeval parish church, though often messed around a bit by nineteenth century 'restorations'. And they are always open to visitors.

How different from Scotland, where ancient churches were often allowed to fall down, to be replaced by solid Victorian structures whose doors are kept firmly shut. The Church of England encourages the casual visitor, or, indeed, unbeliever, on the off chance that he or she might find beauty or solace or just somewhere peaceful to sit, in a place where generations have sat before. The Church of Scotland seems to give the impression that religion is a private matter, to be engaged in at home behind closed doors, or, if you are a believer, only on Sundays, and that beauty has nothing at all to do with it. The exceptions tend to be those churches with historical interest.

And Chelmsford Cathedral is beautiful, though not with the beauty of Durham's solid columns or Wells' great facade. Light streams into its simple uncluttered nave through plain glass windows. Glance upwards and your eye is caught by the jewel-like colours of the painted wooden roofs.

And, of course the Cathedral does have some historical interest, though nothing dramatically unusual. Originally named after St Mary the Virgin, it added St Peter and St Cedd, the latter saint a reminder that Christianity came to the east of England as long ago as the seventh century. The church itself was founded eight hundred years ago, although it was rebuilt in the 15th and 16th centuries. Inevitably it has Victorian additions, in this case to the chancel, but nothing too out of place.

And little beauties remain from the Middle Ages, such as painted cupboards for storing props for the old religious plays, now used for organ pipes. A few attractive family memorials remain, as on the right.

What makes the Cathedral genuinely unusual, however, is the enthusiasm with which in recent years, it has embraced the arts, in particular, the visual arts. In the early 1980s, traditional church furniture, such as the pulpit and lectern, was replaced by modern designs. In 2000, a striking sculpture of Christ in Glory was placed over the chancel arch (above left).

Various artefacts have been commissioned since then: icons, paintings and embroidered altar cloths. All of these artefacts present imagery and symbols which have meaning in the Cathedral's social, geographical and historical context.

What I found most moving, however, and it was personal taste, were the range of sculptures and carvings, in particularly a lovely set of meditative pieces by the Iranian sculptor Saloomeh Asgary. She has called them the Salvation Sculptures. Below you can see Motherhood and Christ is born.

A powerful Pieta stands in the Chapel of Remembrance. A suffering Christ holds out his arms to embrace the world.

A traditional Madonna and Child reassures the visitor. In St Cedd's chapel, the clear glass window has been etched with a representation of the saint.

Individual pieces are striking in their originality. What is more surprising, however, is their overall impact.

Some may think that using church funds for commissions such as these is not appropriate. However, these pieces have a deep spiritual significance and elicit a personal response. The Cathedral is simply carrying out its centuries-old role as benefactor of the arts and of artists. We worship God through music, why not through art?

We are well used to accepting the place of music in religious practice. Few people would question the existence of a church choir or the contribution made by beautiful music to the worship of God. We are, after all, living in something of a golden age in religious music. We do not question the visual impact on worshippers or visitors of impressive architecture, stained glass or even frescoes in those churches fortunate enough to have retained them beyond the Reformation. Art and artefacts of these kinds were of their age, still beautiful, still resonating to the visitor. Nevertheless, it makes sense for some of religious art to represent the concerns and values of our own century.

So, thank you, Chelmsford Cathedral for surprising me with beauty when I came through your doors. 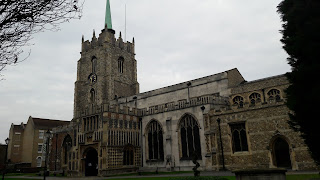 Posted by Elisabeth Ritchie at 09:00