Succumbing to the charms of Sirmione 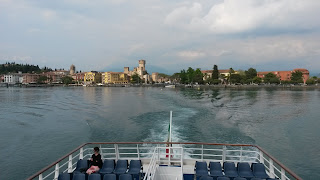 Few experiences can beat one's first sight of Sirmione. You would almost think it was a miniature Venice.

Sirmione is the northernmost 'half' of a peninsular, divided in two by a moat to make it more defensible. Not that it looks particularly vulnerable. Scaliger castle menaces from afar and continues to threaten as you approach. This is what a castle should look like. 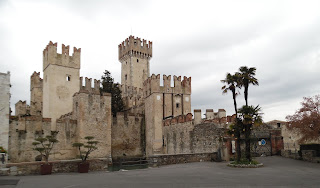 And you're not allowed in unless you go through one of the gates.

Oh, and cross the drawbridge. 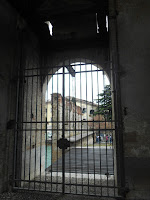 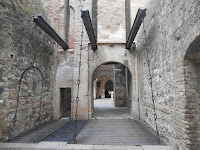 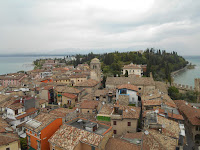 Once you climb to the top, you'll realise why the castle was built just where it is. You could feel pretty secure if you settled behind the castle walls, as did the Cathar heretics, as their last refuge. Not that it did them much good. Charlemagne invaded, took 166 of them prisoner and sent them to the Inquisition which had them burnt at the stake in the Roman Arena of Verona in 1278. Some put the number of those killed as as many as 2,000. 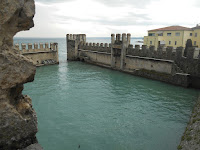 The castle was founded in 1259 during the conflicts between the Guelphs and the Ghibellines (supporters respectively of the Pope and the Holy Roman Emperor), and added to over the centuries It continued in use throughout the period. More recently, in the 1940s, it served as a base for the German Divisional Commander. He and his officials continued their occupation until 1943, when the fascist Repubblica Sociale Italiana was established and the 'capital' moved to Salo. (See previous post The secret past of Desenzano) 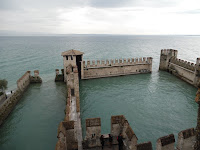 The most unusual feature of the castle is the integral harbour, which used to have its own fleet. For centuries, Sirmione controlled not only the peninsula but also the southern part of Lake Garda, so having its own harbour enabled it to react swiftly to any incursions or threats. Nevertheless, like the other settlements of Lake Garda, its political status was very much at the mercy of whichever great power happened to have the upper hand at the time. Sirmione was a possession of the Republic of Venice from 1405 until 1797, when it was acquired by the Habsburg Empire. It became part of the Kingdom of Italy in 1860, as did Desenzano. 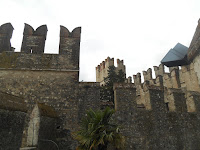 Another unusual feature of the castle is the fishtail battlements, an emblem of the della Scala family who first built it. However, I have also read that they are swallowtails and represent the Ghibellines. Well, who knows? And, to be honest, not many of us visitors really care all that much.

Down below grand civic buildings and churches huddle around the castle walls. Narrow roads wind between them.

Some buildings, like Santa Maria Maggiore reuse old Roman columns and even milestones, reminding us that the history of this peninsula stretches back in time. Indeed, the original settlement was pre-historic, dating back 5,000 years. Indeed, some of the wooden pillars on which the Bronze Age communities built their villages still survive. Indeed, here on the left is one of their boats. 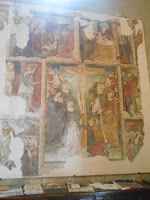 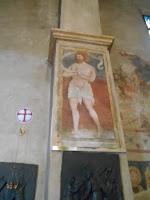 Sirmione was, on the whole, a good place to live and became rich during Roman and mediaeval times. The churches, for example, contain some fine frescoes, such as these in Santa Maria. 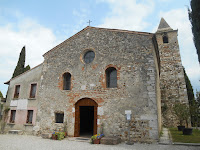 My favourite church, however, is San Pietro di Mavino with its simple internal and external design. Originally founded in 765 on the site of a pagan temple, the current building was erected in 1320, with a bell tower which goes back to 1070. San Pietro was also used to quarantine the sick during epidemics, as a military hospital and as a cemetery for plague victims. 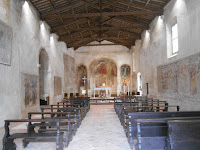 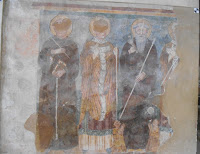 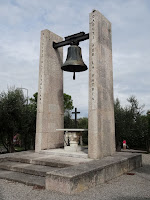 However, privileged though life in Sirmione was for wealthy merchants and aristocrats during much of its history, there have been darker times as well. Next to San Pietro is one of the few reminders that despite the area's active support for fascism before and during the Second World War, there were still a few brave individuals who refused to collaborate with the Nazis and Italian fascists after the establishment of the Republic of Salo in 1943. They were imprisoned in concentration camps where they died. Eventually they were commemorated by this bell, but not until 1955, when presumably community tensions and painful memories had faded away somewhat. The war memorial itself is dedicated to all the Italians who fell during the war, some of them, ironically, fighting for the fascism which destroyed their compatriots.

Despite its fairytale appearance and setting, the more recent history of Sirmione has had a grim side. However, for the Romans who arrived nearly two thousand years ago, it was simply a holiday resort - much as for today's visitors. Only the wealthy and powerful came to Sirmione, taking a break from their busy lives in Verona to take a dip in the thermal springs. Here they could enjoy its pleasant temperature while the rich mineral content was no doubt good for their skin. Today there is a craft soap industry which exploits these same properties. 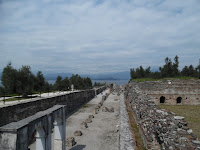 A huge Roman villa on the tip of the promontory called the Grotte di Catullo was once thought to be the poet's home, though Catullus died in 54AD and the villa was built in 150AD. It occupies a very large area, though today much is covered with cypress and olive trees. Sirmione's role as a pleasure garden for the rich has defined it ever since. That is apparent even in its more recent architecture, comfortable modern villas in which to escape from the world. 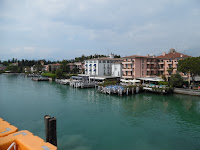 Sirmione is a good example of a settlement which has survived over centuries through a combination of factors. Its defensive location on a peninsula enabled it to hold off potential attackers. Yet, such a small community would still have found it difficult to maintain its independence and security. So, like other communities in the Lake Garda area where great nations meet, it has also survived by bending to their will. Invaders have come and gone. Cathar resisters were wiped out. More amenable inhabitants, however, have continued over the centuries to service the needs and pleasures of whoever was in power. And that role has carried on right up till today. 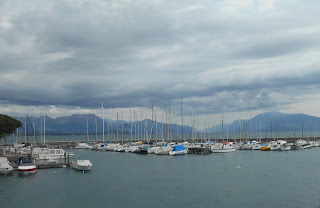 Posted by Elisabeth Ritchie at 11:23