The secret past of Desenzano 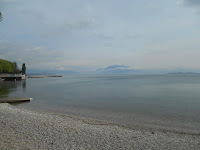 I am not going to pretend that Lake Garda is a particularly inventive choice of destination. I know plenty of people who have had thoroughly enjoyable holidays somewhere on the lake, as in fact did we. However, I never feel the need to apologise for writing down my personal reflections. No one is obliged to read them, after all.

We stayed at the lakeside town of Desenzano on the southern shore of the lake, more than a year ago, now. It has been a holiday destination for centuries, indeed, millennia. Yet this is a town with secrets, most of which we never truly understood. You wouldn't know, to look at it. 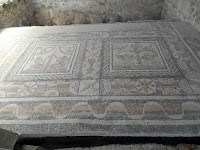 The settlement goes back to Bronze Age times. Ancient pile dwellings in the lake are a UNESCO World Heritage site. 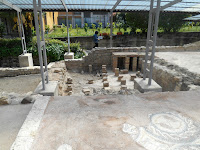 For generations, Desenzano has been associated with relaxation and pleasure. However, it is the ruins of the Roman villas, among the most impressive in Italy, which give us a real sense of the life of luxury which early settlers enjoyed. 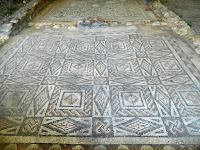 Floors were covered by rich mosaic flooring.  Underfloor heating was used on the damp cool days not unusual in this lakeside location.

In time the owners retreated permanently to these holiday villas when, during the fourth century, political and social chaos threatened to overwhelm their civilised lives. They could not hold back the tide of events, however, and their homes were eventually sacked by 'barbarian' invasions. 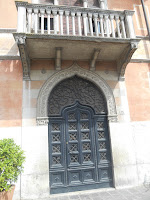 However, what most people associate with Desenzano is its attractive Renaissance architecture and promenades. Narrow streets weave between ancient houses. Building styles recall the global reach of Venice, which occupied the town in 1426. Balconies and doorways even reflect Arab influence. 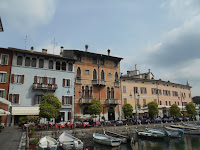 The most famous view of Desenzano is of the Porto Vecchio, or old harbour. It is lined by elegant mansions built during the Venetian republic. However it was a working harbour trading in grain, so on the other side are the arches of the Granarolo or haymarket, built in the late 1500s. Desenzano's peaceful demeanour these days belies dramatic ups and downs over previous centuries.  At various times, Desenzano has belonged to Mantua and Lombardy, eventually being invaded by the French under Napoleon. It was actively involved in the Italian Wars of Independence.

Much earlier, in the 12th century, the town was a centre of Catharism, considered a heresy by the Catholic church. During the Middle Ages, Cathars were viciously persecuted across southern France and around Lake Garda. However, Desenzano eventually adopted conventional Catholicism. It has some attractive sixteenth century churches of classical, rather than striking, design, including the Duomo, or Cathedral. So much, so pleasant.

A castle occupies the hill above the town, constructed at various times before, during and since Roman times. The current building, erected in the 14th and 15th centuries was used as a barracks by the Austrians during the nineteenth century and by Italian forces since then. It was most recently used as such until 1943, a significant date in the history of lakeside towns, though no one quite tells you why. 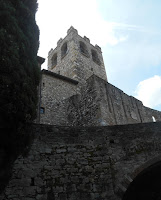 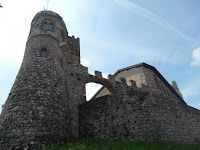 From the walls you look down on red tiled dwellings clustering at the foot of the castle as if for safety. 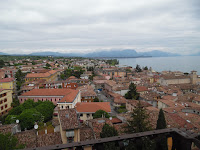 Despite all the delights of Desenzano, however, we couldn't escape the impression that something was hidden. Indeed, the more we explored, the stronger the impression became. Yet the guide books gave nothing away. Our initial puzzlement came from the various memorials to the war dead. The dates on some were surprisingly recent, as if it has taken till the last couple of decades for its citizens to acknowledge the range of responses within the area to the rise of fascism. 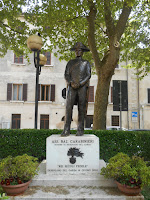 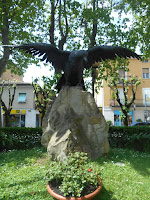 There are memorials to old associations of carabinieri, of alpini.

On the left, the short list of six names of those who rose up against the fascists sits above the far longer list of the scores of soldiers who fought for them.

On the left is a memorial to those who were interned in 'lagers', concentration camps, by the Nazis. On the right is a modern memorial to 'all' the war dead, probably an attempt to bring people together.

None of this is explained to the visitor. Whereas Germany has confronted its past, you get the sense that by the side of Lake Garda, past events have all been brushed under the carpet.

For Lake Garda has an unsavoury history. D'Annunzio, the ultra-nationalist writer of the early twentieth century who foreshadowed - and contributed to - the fascism of the war years, had a house at Gardano on the western shore. From D'Annunzio, Benito Mussolini learnt the culture of dictatorship, the balcony speeches, Roman salutes and formulaic exchanges with the crowd - the kind of delivery with which we are now becoming familiar, in an embryonic and more informal American setting, from Donald Trump's campaign speeches.

Mussolini himself is closely associated with Lake Garda and, during the most infamous period of the area's history, set up the Repubblica Sociale Italiana (RSI), the Republic of Salo, under the oversight of his German masters and with the support of German troops. The Republic survived from 1943 to 1945, with Mussolini as both head of state and prime minister, and was only ever recognised by Germany and Japan and their puppet states. Although the new state had Rome as its capital, it centred on Salo, on the western coast of Lake Garda, about 20 kilometres from Desenzano. Here in Salo, the headquarters of Mussolini and the Ministry of Foreign Affairs were established. You can still visit his official residence, the Palazzo Feltrinelli at Gardone, now a luxury hotel.

Why set up the headquarters of a republic in Lake Garda? Well, it was quiet, and did not have the large urban populations which in most European countries have tended to support the left and oppose the establishment. There were not many partisans in the local area and the allies could not reach it easily. 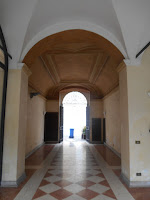 The main purpose of the RSI was to maintain order and to suppress the Italian partisans. Although Salo was the capital of this miniature puppet republic, most of the small towns around Lake Garda were given responsibility for some aspects of governance including Desenzano where the Ministry of Naval Affairs was sited. Ministries and civil servants had plenty of accommodation, of course, setting themselves up in private villas and grand residences, of which there were plenty.

The strange hesitation about acknowledging the war years, about the previous use of some of the public buildings, not just in Desenzano but elsewhere, about the contrasting roles played by the population in the promotion and support of fascism, is still carried on through the divisions between the left and the right in modern Italian politics. It is easier to ignore than to confront and explain. At most there has been the cultivation of a cosy myth of the Italian 'character' which ostensibly avoided the excesses of repression and anti-Semitic activity which characterised Germany. As a result, people have tended to forget the location of the concentration camps, the behaviour of the fascist bullies and the deportation of Jews.

Not, of course, that we in Britain can feel too virtuous. We too had our British Union of Fascists. On Sunday evenings, we are currently facing up to the extent to which we would have collaborated if our country had been occupied by the Germans, through the dramatisation for TV of Len Deighton's thriller SS-GB. For years, the British National Party expressed its nasty views, although that role has now been largely taken on by Britain First. The UK Independence party has been highly successful at dressing up unpalatable racist opinions in socially acceptable language. The English Defence League is closely associated with similar groups in a number of European countries. Indeed, the Norwegian murderer Anders Behring Breivik claims many members of the EDL are his Facebook friends. And in case we complacently assume that Scotland is immune to far-right activity, we should be aware that members of the proscribed organisation National Action and the Scottish Defence League are currently threatening the safety of newly settled refugees in Scottish towns and cities. The SDL itself may be tiny, but can have a dire impact on community cohesion through its broader group of admirers and hangers.

What we need to be aware of is that fascism today does not express itself in the same way as in the 1930s and 40s. Anti-semitism is less to the fore. These days the rage and hatred of British fascists is principally directed towards Muslims and Islam, portrayed as 'the other'. Indeed, our three most popular newspapers - the Daily Express, the Daily Mail and the Sun - are only too happy to make such divisive views part of everyday discourse. And in the USA half the electorate voted for an openly racist and misogynist President.

The quiet and attractive towns of Lake Garda do not look as if they hold any unpleasant secrets. The tourist can visit them without hesitating about what he or she might find. No one gazing over the town of Desenzano today would think that seventy years ago goose-stepping troops assembled in its main square, opponents of fascism were rounded up and imprisoned and many ordinary members of the community helped the wheels of authoritarianism turn smoothly just by carrying out their normal jobs.

Such a scenario may be Desenzano's secret past. Let us hope it does not become our future. 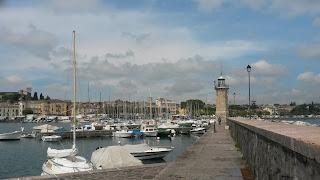 Posted by Elisabeth Ritchie at 16:21