Crossing the Firth of Forth to Aberdour 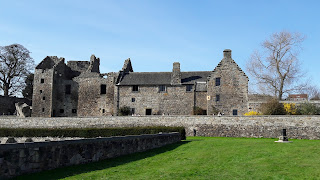 In the midst of all the tensions and distress of the last few weeks caused by international and national events, we Ritchies, like most people, have carried on finding pleasure in our usual activities. For Stuart that means golf: this fortnight, Dunbar and Gullane in East Lothian and Fulford in Yorkshire, all scenic and challenging courses. For me, it means visiting attractive places, beautiful buildings and stepping back in time. What was it like to live during the politically sensitive sixteenth and seventeenth centuries, for example, or during the power struggles of the Middle Ages?  Despite differences in context, causes and trigger points, many of the issues our ancestors faced are not that dissimilar from those our countries and communities face today. So, last Sunday, on a lovely sunny spring day, off we went to Aberdour.

If you've ever heard of Aberdour on the southern coast of Fife, it will probably have been in school. Sir Patrick Spens is usually one of the first ballads children read. It is also one of the most moving. The ballad tells the story of Sir Patrick, 'the best sailor that ever sailed the sea'. The King is sitting in the royal town of Dunfermline, 'drinking the blude-reid wine', when he decides to send Sir Patrick to Norway to fetch the king's daughter. Loyal Sir Patrick knows it is the wrong time of year to make such a journey, but sets off nevertheless. The ship is caught in a storm and, just half an hour from Aberdour, it sinks. Sir Patrick, all his men and, presumably, the Norwegian princess, all drown. 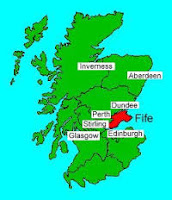 Alas, you won't find any sign of Sir Patrick when you cross the Firth of Forth to Aberdour, for the very good reason that Sir Patrick's ship never made it to land, and probably would not have put into harbour at Aberdour anyway. We visited Aberdour rather boringly by car, over the bridge which has replaced the old Queensferry crossing point. 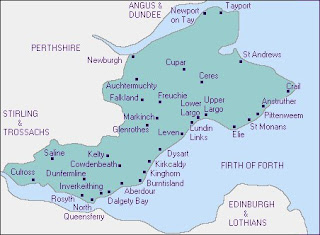 Aberdour Castle was not a royal palace. It was a nobleman's house and, for most of its history, belonged to the Red Douglas, the family mentioned in passing in our earlier post Bloody times in Kirkcudbright.

The history of the Douglas family is typical of that of many families at the time. They trod the tightrope between royal favour and political power and royal disfavour and political jealousy. One slip and you were imprisoned and executed as a traitor. Nevertheless, the Red Douglas survived and did very well out of their court favours.

Aberdour Castle was originally built by the Mortimers in the 1100s. However, in 1342, King Robert I (the Bruce) gave the lands to Sir William Douglas, a famous soldier in the wars of independence against English, though also, sadly, a murderer - of Sir Alexander Ramsay. However, he regained favour and fought for the Scottish king at the Battle of Neville's Cross in 1346, when the Scots invaded England and got as far as Durham. The Scots lost the battle and Sir William was imprisoned. After six years as a captive, he committed treason by making a deal with the English king. He was later killed by his godson during a quarrel over land. However, the castle remained within the family as they became more powerful. The family head acquired the title of Earl of Morton, while his eldest son became Lord Aberdour.

Aberdour Castle is basically a tower house, replacing the original keep. You can see the ruined tower when you enter the inner courtyard (on the left of the main building below). Sadly, much of this building, the oldest part of the castle, has fallen down. Still, many of the original features can still be made out, like fireplaces, windows and staircases.

You can also see the large sunken basin for dough, and the brewhouse and bakehouse ovens.

An interesting feature of the central range, late 16th century, is the use of oyster shells in the building material (the white objects in the photo to the right above).

The most notorious of the Douglases at this time was James Douglas, 4th Earl of Morton, who in 1563 became Lord Chancellor of Scotland, under Mary Queen of Scots. Although he was one of the most powerful people in the land, he had to flee to England after being implicated in the murder of Mary's adviser, Riccio. (See post on the Palace of Holyroodhouse and also on the Canongate and Craigmillar Castle.)

This tough aristocratic operator became more powerful than the queen he ostensibly served. Morton accepted Mary's surrender, oversaw her abdication in favour of her baby son James VI and defeated the troops who still supported her.  He eventually became Regent to the infant king and successfully brought peace to Scotland by sorting out the feuds among the Scottish nobles.

It was this Earl of Morton who first laid out the terraced gardens, from which you get a wonderful view of the castle. At the furthest end is the 16th century dovecote. 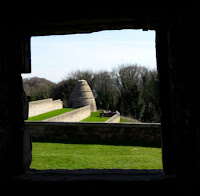 However, Morton's past eventually caught him out. His rivals forced him to resign. He was finally imprisoned, accused of high treason. In 1581, he was executed for the murder of Darnley, second husband of Mary Queen of Scots and father of James VI. Morton had been responsible for introducing the maiden,a kind of guillotine, to Scotland. It was his bad luck that it was this very machine which was used to behead him.

The East Range is the newest and grandest part of the castle, built in the 17th century by William Douglas, the 8th Earl. He was the Lord High Treasurer of Scotland, a prestigious position but with its drawbacks. He ended up subsidising Charles I who needed money to fight the Parliamentarians during the Civil War. Still, he managed to build an impressive gallery and some luxurious living areas.

The painted ceiling in the East Range is particularly splendid.

This period marked the high point in the history of Aberdour Castle as a nobleman's dwelling. The building fell into disrepair and was damaged by fire on more than one occasion, the last one in 1715 when Hanoverian troops were stationed there. Once the family moved out, the East Range continued to be used - at various times as a barracks, a school and a masonic lodge. It was eventually handed over to the State in 1924. The family moved into a house down the road.

However, one corner of the Castle's land has been in continuous use from 1140 until the present day: St Fillan's Church. Your first sight of this lovely mediaeval parish church may well be from the Castle gardens. Indeed, a door leads directly into the churchyard, though not for the casual visitor.

St Fillan was the abbot of Pittenweem, along the coast to the north east. Here there was St Fillan's Well, which was said to have healing properties. Pilgrims to the well, also visited the church at Aberdour.

The church still retains a leper squint and the laird's gallery.

In the graveyard are some lovely old tombstones. In the far distance lies the Firth of Forth and beyond it and across the water, the city of Edinburgh.

In Edinburgh, we are surrounded by royal castles and palaces: the Palace of Holyroodhouse, Linlithgow Palace, Edinburgh Castle, Craigmillar Castle, Stirling Castle and Falkland Palace. Most of these we have also written about in this blog. However, Aberdour Castle is a bit different. It is not some grand king's castle. It is an ordinary nobleman's house which developed over time from defensive tower house to comfortable aristocratic dwelling. Some of its inhabitants were among the most notable men of their time. Some even achieved notoriety. A few would probably have preferred to die peacefully in their beds. The later scions, however, sank quietly into oblivion. Who isn't to say that they weren't happier that way?


The information used in this post came from Historic Scotland's guide to Aberdour castle.

Posted by Elisabeth Ritchie at 22:11