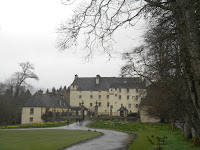 It was damp and dreich on our most recent visit to Traquair, the daffodils signalling determinedly that Spring was here, despite all appearances. The house looks tranquil enough now, despite its chequered history. Situated on borderland disputed for centuries, it has seen and survived tumultuous events, to become Scotland's oldest inhabited house. 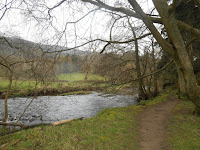 The first house was built as a royal hunting lodge some time in the late 11th century. Once the nearby woods held wolves, bears and wild boar, hence the bears on the coat of arms. Traquair was not just a pleasure ground, however, for here the kings could also keep an eye on their neighbours and rivals.  The house sits close to where the winding Quair burn joins the River Tweed, the notional border between England and Scotland, but here at Traquair definitely Scottish. 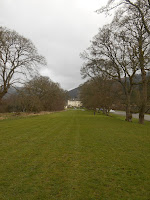 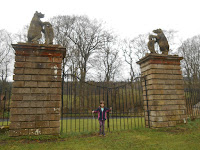 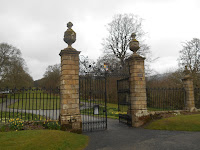 The magnificent gates, topped by bears, were erected in 1738, but have been locked since 1744 when the 5th Earl bade farewell to Bonnie Prince Charlie as he left for London. He swore never to open them again until a Stuart was once more on the throne, so locked they remain. From the gates, a long avenue stretches down to the house, a dramatic vista. Entry is now through these rather attractive replacement gates and a 'temporary' avenue to one side. 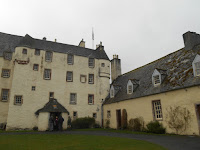 The house was always going to be on the front line. During the Wars of Independence in the 13th century, the fortified Traquair tower was part of a network of border towers set up to guard against English invasion and send signals using signal flares and mirrors. It was briefly occupied by the English until the Robert the Bruce became king in 1306. 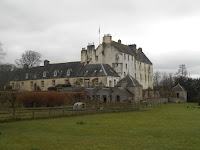 The Stuarts of Traquair weren't too concerned about picking the 'winning' sides in Scotland's conflicts. Life for the family got progressively more complicated. James Stewart, appointed 1st Laird of Traquair in 1491, was killed at Flodden Field in 1513, alongside King James IV. John Stewart, grandson of James, entertained  Mary Queen of Scot and her baby son, later James VI/I, at Traquair. The house still has the bed she slept in and the prince's cradle. 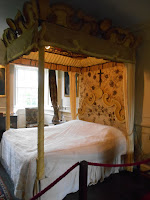 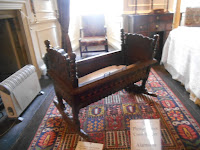 However, Mary's life was falling apart and James later helped her to escape from Holyroodhouse to Dunbar.

During the 16th century the house developed some of the decorative features for which it is still known, like painted beams (below left) and a mural dating from 1530 with exotic animals, one of the earliest in Scotland. 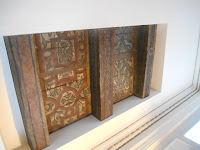 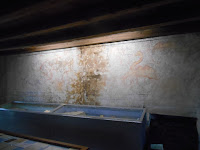 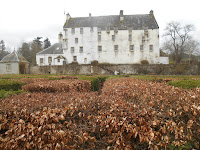 John Stuart (note spelling), 7th Laird, at first did very well out of his loyalty to Charles I, the Stuart monarch of both England and Scotland. In 1628, he became 1st Earl of Traquair and Lord High Treasurer, then Commissioner of Scotland. He made many improvements to the house and grounds. However, the 7th Laird's luck ran out. His loyalty to the King and the Episcopal church resulted in Parliament fining him and dismissing him from his post.


During the Civil War, the 7th Laird joined the Royalist Duke of Montrose, though he withdrew his troops before the Battle of Philiphaugh. He refused Montrose entry to Traquair after the defeat, fearing it might be destroyed. He and his son were later imprisoned in Warwick Castle after the Battle of Preston and became virtually penniless. 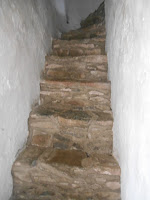 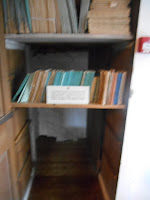 The family became, and remain, staunch 'recusant' Catholics, practising their faith in secret when it was banned. The priest lived in a small room upstairs, which had a secret staircase behind a cupboard (left), through which he could escape if the house was searched. Only the Catholic Emancipation Act in 1829 made this practice unnecessary. However, for hundreds of years, the Stuart family lived quietly, isolated from other noble families and usually marrying only from within other recusant families.

The Traquair Stuarts also retained their Jacobite beliefs, loyal to the exiled James VII/II when he fled to France after the Glorious Revolution of 1688 which put his daughter Mary and her husband William on the throne as joint monarchs.  They subsequently supported James' son, Bonnie Prince Charlie. The 4th Earl suffered imprisonment in Edinburgh Castle for taking part in a Jacobite Plot. The family were also involved in the Jacobite Rising in 1715. The Earl's brother-in-law was imprisoned and sentenced to death, his wife helping him to escape the night before the execution was to take place. 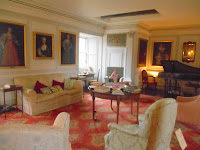 The 5th Earl, who built and locked the 'bear' gates, was also imprisoned for his Jacobite beliefs, first in the Tower of London and then under house arrest at Traquair, where he spent his time redecorating the house. Subsequent Earls continued to make Traquair House into a comfortable family home. 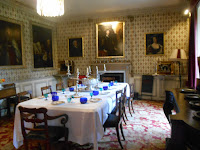 After 1829, the Traquair Stuarts were able to build a chapel, which is still used for worship by both the family and the local community. All the risks of their secret loyalties and anti-government activities have long been forgotten. No need anymore to live dangerously. 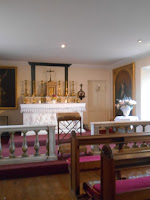 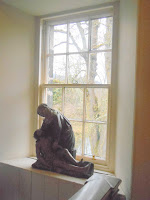 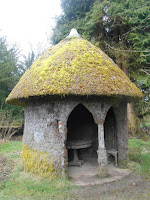 And the Maxwell Stuart family, who inherited the house and estate from the original Traquair Stuarts, continue to live at Traquair, developing it as a centre for both the local community and those further afield. The family set up a brewery many years ago which is still going strong, making 'real ale'. They organise literature festivals, drama productions, exhibitions and races of various kinds. Small craft businesses occupy some of the outhouses. I believe you can even hold your wedding there. 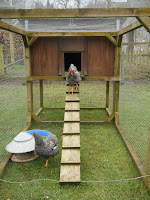 Our family has spent many a happy day at Traquair. You can visit the animals, play on the climbing frame and explore the garden and woodland. 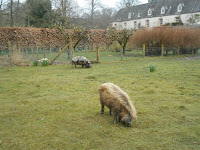 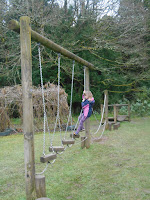 And, of course, you can dine out on excellent home-cooked food, in near proximity to the peacock and his family.  What's not to like?!

All this within 45 minutes of the capital. A truly wonderful day out from Edinburgh.


NB The information for this article came from the excellent printed and online guide to Traquair.


Posted by Elisabeth Ritchie at 21:03