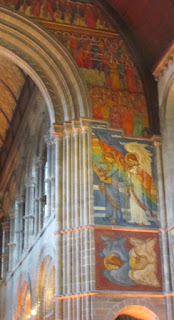 If I asked you where you thought I had photographed wall paintings like those on the left, you might find it a bit of a tricky question. Rich jewel-like colours, traditional religious iconography - Italy? A Botticelli connection, perhaps, in the way the wings are depicted?  Or Fra Angelico? With a sense of place - silhouetted hills, meticulously depicted leaves and flowers?

But isn't there something rather more recent than the sixteenth century about these paintings? A modern artist who looked back to the Renaissance for inspiration, then? Must be Pre-Raphaelite. Arts and Crafts, William Morris, perhaps. Well, indeed. To put you out of your misery, this mural and a whole church full of wall paintings like it is in Edinburgh. And the artist? Phoebe Anna Traquair.

Traquair started work in 1893 and finished in 1901. And yes, she had visited Italy and studied the paintings of the great artists of the Renaissance. 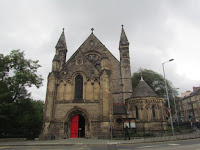 So what denomination of church is it, for this is Scotland, after all, the country of John Knox. Surely it's Roman Catholic, or at least Episcopalian. Well, take a look at the outside. It's a bit of a surprise, isn't it?

The external design could be that of any substantial nineteenth century church building.  The structure, now known as the Mansfield Traquair Centre, sits on a corner in the New Town where four broad elegant Georgian streets converge. Like the neighbouring townhouses, it looks solid, prosperous, well-built, indeed, rather attractive - but unremarkable as Scottish churches go. And Protestant, very definitely Protestant. How conservative! How conventional!

Yet, you know already from that first glimpse, that nothing could be further from the truth. Open the door, go through the vestibule, and this is what faces you. Then turn round and gaze at the west wall. 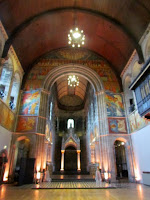 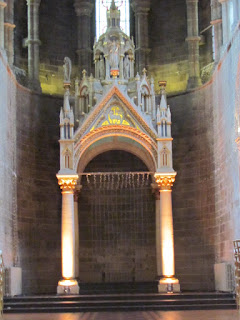 Almost every square inch of the walls is covered with delicate but stunning murals. My photos do not even begin to do them justice.

And what is this construction at the 'east' end? It is what is known as a baldacchino, and would once have been erected over an altar. The altar is now in St Mary's Metropolitan Cathedral a mile or so away, Edinburgh's premier Roman Catholic church.

So, a Catholic church then?

Well, no, not really.

No, this building once housed a congregation of the Catholic Apostolic Church, an amalgam of various denominations, principally Episcopalian, but with links with Presbyterianism mingled with elements of Eastern Orthodoxy and Catholicism. Eclectic, then!

Does it really matter what branch of the Christian church hired Traquair? Well, yes it does. Members of the Catholic Apostolic Church which began around 1835 were convinced that the world was coming to an end. All the signs were there - the godlessness set in train by the French Revolution and attacks on established social and political hierarchies. Yet, there was something even more distinctive about their beliefs. They were entirely positive in tone. Members of the Catholic Apostolic Church chose the 'best bits' from the various faiths on which they drew. They looked forward to the return of Christ who would set up a kingdom on earth and rule with his twelve 'restored apostles'. For not only did its believers venerate the traditional four apostles of the gospels.... 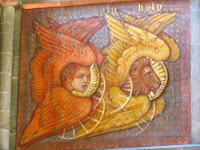 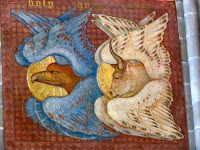 ... they were also led by twelve specially and locally appointed 'apostles'. (A slight problem here, nobody had thought of replacements for when they died, which they did, all of them, and before the Second Coming.) 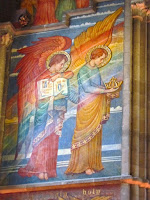 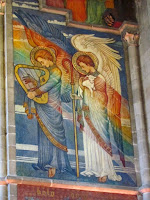 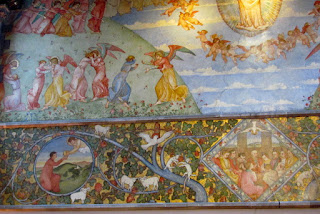 And what did church members think about the traditional elements of religious belief: heaven, purgatory and hell? Well, the wonderful thing about the Catholic Apostolic Church was that it only believed in heaven. It's logical. Christ came to save us all, and all of us will be saved. No sooner has your soul left your body but your guardian angel will welcome you into the afterlife. There the angels are on the upper left of this painting, part of the great mural on the western wall, each of them meeting a soul. 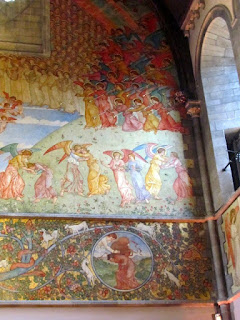 At the bottom left (above), you will see an angel helpfully handing back his heart to a recently resurrected human being. On the bottom right, the angel is relieving the new arrival of the burden of his human life.

At the top of the wall are the saved, gathered in their thousands around the figure of Christ, and rejoicing, for you would, wouldn't you?

But what about the sheep and the goats? After all, we've all been taught that God is going to divide them on Judgement Day. The Bible says so.

Well, in this church, both goats and sheep happily gambol among the branches of the tree of life, sheep on the left, goats on the right. For Christ will save them all.

Who wouldn't want to believe in a religion like this?

No wonder the prosperous citizens of the New Town flocked to the Catholic Apostolic Church. In its early years, they arrived in their carriages, all seven hundred of them. By the turn of the century, it was Rolls Royces which were parked outside. No worries about rich men and eyes of needles, for all will enter the Kingdom of Heaven!

And so the Bible stories continue, the positive ones, that is, round the walls of the nave and chapels. Here are the wise and foolish virgins. The irresponsible sluggards are as ill prepared as they have been since the gospel story was written. They sleep when they should be awake. Their lamps remain stubbornly oil-less and unlit. 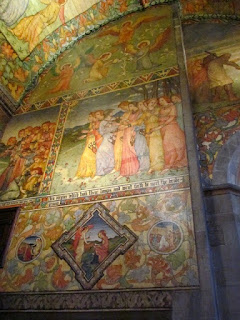 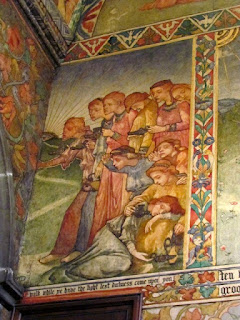 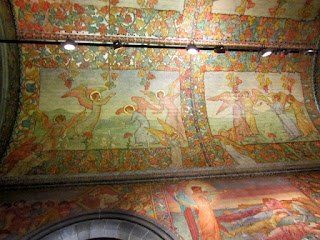 Above these domestic incompetents, fly the angels, golden halos shining, for all shall be well. The flowers intertwine as if on the pages of an illuminated manuscript. And even a Pictish monster or two creeps in, for this art is nothing if not inclusive. 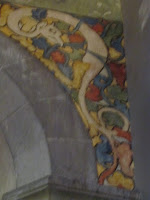 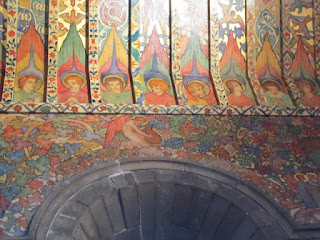 Following the curves of the round Romanesque arches creep animals, lions, lambs and even a chimpanzee or two.

And above our heads is a wonderful painted ceiling in the Scottish style, probably copied from Muchalls Castle or Crathes.


The angels spread their wings, keeping us safe from harm. 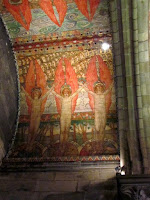 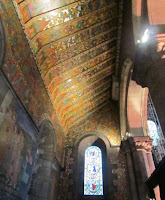 However, the strangest Biblical interpretation of all appears on the walls of the nave.

He rides into Jerusalem, on a donkey. 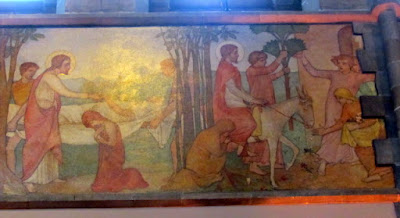 The women approach the gardener: 'They have taken my Lord.' The angel announces that He is no longer in the tomb: 'Christ is Risen!'

But what is missing?

The Crucifixion. We go straight from Ride on Ride on in Majesty to Christ the Lord is Risen today. For the Catholic Apostolic Church, as we have said, presented its worshippers with positive beliefs only. They were not at all encouraged to dwell on the negative. You don't get much more negative than the Crucifixion.

Nevertheless, Resurrection is what Christianity is about. And the glory and splendour of the Risen Lord is all around you when you visit Mansfield Traquair.

The Mansfield Traquair Centre is now the national office for the Scottish Council for Voluntary Organisations and is also open for events. The building was stabilised after years of neglect and the murals rescued by Historic Scotland and Edinburgh City Council. It is now in the hands of the Mansfield Traquair Trust. The Centre is a working building, but you can visit on specific days in the summer months and during the Fringe in August. The information on which this post is based was gathered during a wonderful tour by a knowledgeable guide with a fascinating store of stories and a sense of humour, and also from an excellent guide published by the Friends of Mansfield Traquair Centre.

You can see more murals by Phoebe Anna Traquair in The Song School attached to St Mary's Episcopal Cathedral in Palmerston Place. The National Library of Scotland, National Gallery of Scotland, the Museum of Scotland and the University of Edinburgh Library all house various artefacts created by Traquair. You can see some of her enamel work in the Thistle Chapel in the High Kirk of St Giles.

Posted by Elisabeth Ritchie at 22:28