Life and death in Minoan Crete

On those rare occasions when one thinks of the Minoan civilisation (for me, about once every ten years but for you, perhaps, more frequently) it is always the palaces which come to mind: Knossos, Faistos, Zakros. We recall strange cults associated with bulls. We remember the labyrinth, but are not too sure whether it really existed. And for me and perhaps also for you there is the novel The King Must Die by Mary Renault, whch I read as a teenager, over and over again. 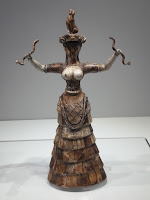 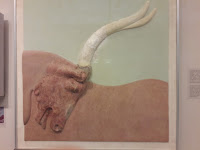 However, as in our own country, not everyone from the past lived in a palace, and while the hovels of the poor may have long since disintegrated, the villas of the comfortably off are still around, though often under our feet. Some of these houses may even have been excavated. 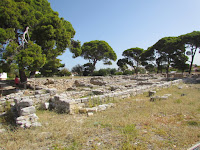 Such a place is the small town of Tylissos, south of Heraklion, in which three grand Minoan houses have been uncovered. These structures represent just a small part of what was once a busy town, famous for its bronze working.

The houses are solid structures, separated by well-laid paved paths. We can assume that over the centuries their descendants, or Greek invaders, removed much of the stone for their own building projects. Nevertheless, much remains, though roofless. 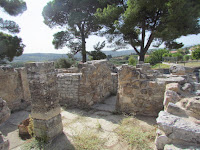 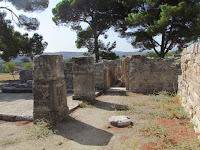 The solid walls would have kept the rooms cool. Indeed, there are few signs of any windows. 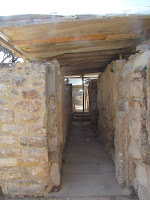 The buildings were at least two, and perhaps three, storeys high, some of the stairs still remaining. 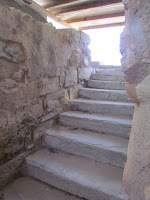 Again, as at Faestos, the features I found most moving were the domestic ones: the deep pythoi, or storage containers, clearly too large for any looters to move. Three thousand-year-old kitchenware.

The cistern is suitably large and mostly intact. There are still a few benches and what looks rather like a fireplace. 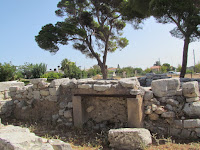 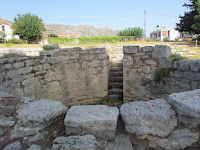 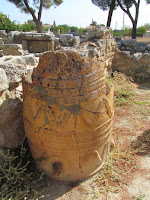 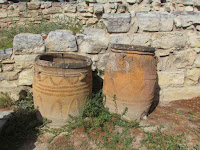 In the Heraklion Archaeological Museum, Stuart kindly posed to give some idea of the size of these enormous containers. One of the displays even contains the Tylissos family's cooking pots: huge black cauldrons. There were a lot of mouths to feed, evidently. 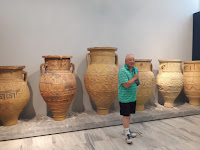 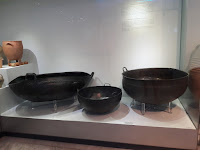 The museum is a wonderful place for discovering how people lived in Minoan Crete: not just the royal or rich but also the aspiring middle classes. These prosperous business men with their metal working foundries, wanted to ensure that they would be as comfortably served in their after life as in the present. The cabinets of grave goods give you a pretty good idea of what 'comfort' meant three and a half thousand years ago.

I was quite taken with a display of decorative teapots, for example. And there in another cabinet was a display of elegant tea cups, with tasteful designs de rigeur in 1700 BC. 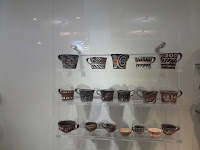 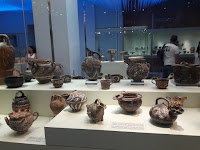 Every well-run household should have its own domestic shrine, of course, here topped by bulls' horns, as you would expect. But other designs are also possible. 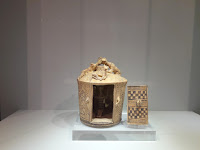 And eventually, even the prosperous businessmen died and were buried. At Armeni, south of Rethymnon, you can visit Late Minoan tombs, not necessarily those of the citizens of Tylissos, but perhaps of Kastelli further along the coast to the west.

At Armeni, archaeologists found around 500 skeletons, which, when studied, elicited some interesting information. These Minoan citizens, wealthy enough for their families to be able to dig chambered tombs and provide grave goods, ate quite a modest diet by our standards. They consumed a lot of carbohydrates but very little meat. The men were about five foot five and the women about five foot. 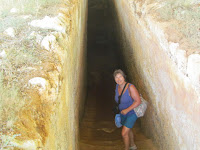 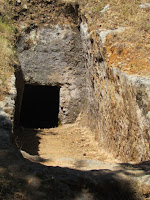 The Minoans didn't live long lives. The men were about 31 years old when they died, and the women about 28 at best. Many of the women died between age 20 and 25, probably in childbirth.

People of both sexes died of a range of diseases: bone cancer, tuberculosis, brucellosis and, many of them, of accidents. 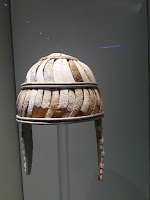 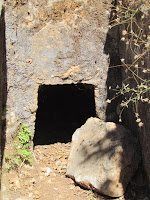 And, after their death, objects were placed in their tombs: pottery, bronze vessels, tools, vases and jewellery. One man even took his helmet with him, made of the tusks of 59 boars.

Tombs were sealed with large stones. Some of them were quite plain inside, but the grandest were spacious rooms, sometimes with seating. 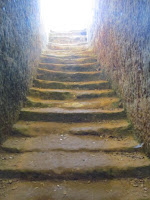 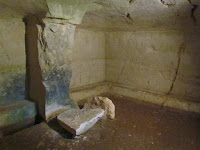 In some of the tombs, archaeologists found decorated coffins. 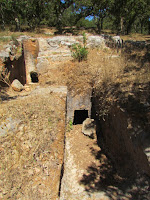 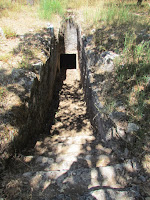 And in some of the tombs, the chamber was really quite crude: just a rough round hole. 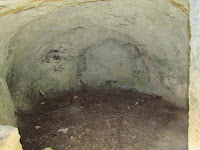 So, the Minoans died as they had lived, in ways quite mysterious to us. This amazing civilisation came to an end quite suddenly: in 1450 BC. Historians have varous theories about the cause of its collape. One theory relates it to the volcanic eruption of Santorini, and perhaps, a resultant tsunami. Others link it to invasion by Mycenaeans from the Peloponnese on the Greek mainland. Another theory claims that both of these events might have been causes. The Minoan culture and way of life may have been severely weakened by a natural disaster. Mycenaeans then overwhelmed them. 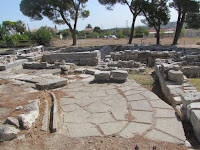 What is clear, is that this ancient culture came to almost a complete stop. Some say that a few refugees escaped to the caves and valleys of Sfakia in the White Mountains. There their language may have influenced the local dialect. However, no one really knows. 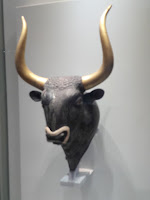 What the story of the Minoans tells me, however, is that we have to be very careful about thinking of 'progress', as if each civilisation is somehow 'better' or 'more advanced' than the one which preceded it. The 'Greek' conquerors of Crete eventually became one of the greatest civilisations the world has ever known, though it took millenia before 'Greece' as a country ever existed. Greek civilisation forms the basis of much which we recognise as quintessentially 'European'. The Minoans, however, did not leave us much, if any, of a written record, and most of their few clay records have still not been deciphered. All we can do is look round at what they created and ponder on what may not have survived.

However, there is no doubting the eventual impact on the rest of Europe of conflicts and alliances among mainland and island Greeks. In Crete, they seem to have wiped out native Minoan culture and replaced it with Greek languages and culture, which became distinctively 'Cretan' over the millenia. The island of Crete, inhabited by sea-faring people and attracting merchants from across the known world, was unlikely to have remained a monolithic, monoglottal culture. Like other areas around the Mediterranean, and like our own British Isles, its population would have become increasingly mixed, as people emigrated and immigrated and as invaders came and went. Homer writes in The Odessey: 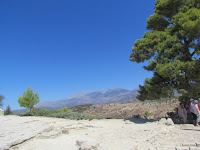 "There is a land called Crete, in the midst of the wine-dark sea, a fair, rich land, begirt with water, and therein are many men, past counting, and ninety cities. They have not all the same speech, but their tongues are mixed. There dwell Achaeans, there great-hearted native Cretans, there Cydonians, and Dorians of waving plumes, and goodly Pelasgians."

People have speculated that the 'Cretans' mentioned here, may have been descendents of the Minoans, retaining elements of an ancient language.

In turn, over hundreds of years, those mainland Greeks who settled in Crete also developed city states on the mainland and on other clusters of islands, which dominated the Mediterranean for centuries. Greek art, drama, philosophy and politics, particularly from Athens, had a significant impact on the peoples around them, including the Romans who eventually invaded both Crete and Greece. Romans respected and retained many elements of Greek culture. In time, Roman conquerors brought Graeco-Roman culture everywhere THEY went, including Britain, overwhelming Celtic tribes, their culture and language, and driving remnants of their people into remoter areas.

Catastrophic events such as those that destroyed Minoan civilisation and replaced indigenous cultures elsewhere are commonplace. People struggle for land and power and communities suffer the horrors of warfare and invasion, then and now. On our own island, Roman conquerors were followed by European tribes, Saxons and Jutes, and in time, Norsemen. Northern European cultures mingled with those of the south. What emerged are the Britain and Europe we have now. Much is lost, but much remains. We Europeans owe Greece our democratic forms of government and many of our ideas about art and philosophy.

Contemplating the rise and fall, life and death of Minoan civilisation, and of countless civilisations before and since, puts me in mind of the words which Tennyson gave to Ulysses: "Though much is taken, much abides"

Posted by Elisabeth Ritchie at 15:06