The militant monks of Preveli 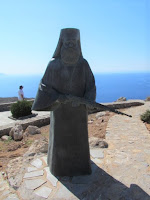 Wow ...a statue of an Orthodox monk with a rifle in his hands! Not the usual sort of statuary for a monastery.  On the other side is an Allied soldier from the Second World War, also with a rifle. Not a pacifist order, then.... 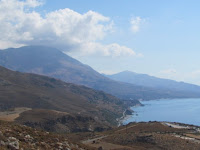 The figures stand in silhouette against the noonday sun, their backs to the Libyan Sea and the passage to Egypt. Flags of Greece, Britain, New Zealand and Australia are depicted on the memorial to the events of 1941. We have reached the militant monastery of Preveli, or, to give it its full title The Holy Patriarchal and Stavropegic Monastery of Saint John the Theologian, high above the sea on the southern coast of Crete.


1941 might be the year most commonly associated with the monastery and at the end of this post, if you stick it out, you will reach a fuller description. However, the monks have been wielding their weapons for over three centuries. 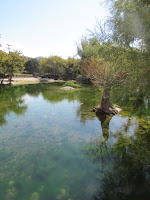 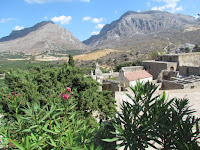 The monastery was probably founded in the 11th century in a now abandoned building, Kato Preveli, nestling in a green valley below bare grey mountains. The old building stands above the 'Great River', over which the monastery erected an attractive bridge. 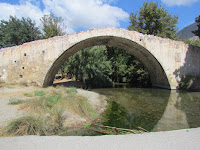 However, the idyllic valley setting belies the violence of the monastery's history. It has been destroyed six times as a direct result of its active involvement in the revolutions and conflicts of the times. These conflicts almost always originated in Sfakia, the wild region in the south west of Crete. The monastery was first demolished by force in 1646 and finally in 1943. By the mid-19th century it had already been rebuilt on a more easily protected hilltop site. The rest of the photographs are of this 'new' monastery. The old one is inaccessible.

Why was the monastery the target for such repeated destruction? Well, after the Venetians handed over Crete to the Turks in the seventeenth century, the monastery was at the forefront of the struggle for liberation. One abbot, Efrem Prevelis, took an active part in the revolt of 1770. Indeed, he was accused of killing a Turkish jannisary with his own hand, for which he was condemned to death, though eventually acquitted through the intervention of the Patriach. 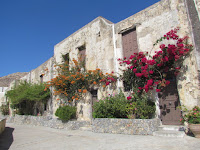 One of Preveli's most famous abbots was the splendidly named Melchisedek Tsouderos who understandably aroused Turkish suspicions when he started buying armaments and storing them in the monastery. He established a local military force which he led against the Turks in various operations across the west of Crete. He had a particularly influential role in the revolt of 1821. He was finally killed in 1823. Once more the monastery was incinerated and the surviving monks left 'ragged and unshod'. 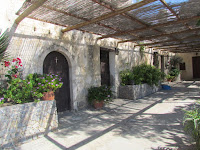 However, the monks were excellent businessmen. They rebuilt their monastery by borrowing money 'on huge interest' to buy seeds, animals and building materials. In fact, the convent had always been very prosperous as local villagers used to hand over much of their produce rather than let it fall into Turkish hands. In its heyday, it had more than twenty monks, though now only three remain. Their cells are on the left. 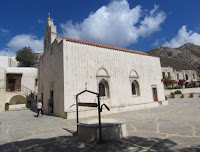 The monastery accumulated many precious treasures, including a splendid gilded panel (iconastasis) and a wonderful collection of gilded icons. It also acquired the Holy Cross, a golden crucifix set with diamods and said to contain a fragment of the True Cross.

While some of the monastery's accumulated wealth was spent on holy objects such as these, and some on weaponry, the monastery also established a dozen schools, paid for teachers and constructed bridges. It ran its own school to train candidate monks. 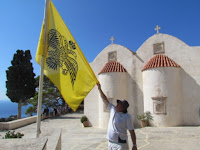 The struggle against the Turks continued right through the nineteenth century, coming to a head during the 'Great Raising of 1866', when, apparently '150,000 abandoned and unarmed Cretans confronted with the almighty Ottoman Empire'. The Monastery of Preveli took part in the Revolutionary Committees and contributed supplies such as bread, oil, meat and cheese. However, that was not all: 14 monks actually took up arms. Indeed, the Abbot led them into battle, sprinkling them with Holy Water and raising the Holy Cross for them to follow. In the absence of the Holy Cross, you cans see Stuart on the right holding high the Sfakian flag. 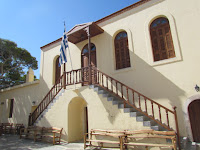 The remaining monks cared for refugees, arranging evacuations to mainland Greece. In 1867, the monastery was destroyed again. You might have thought that the monks would give up at this stage, but no. Throughout the 1870s, the monastery received shipments of arms from the mainland and fought battles with Turkish forces in local villages. They kept gunpowder in nearby caves and half a dozen monks were employed in manufacturing cartridges which they stored in the cells. 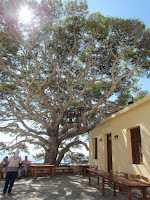 And the monks carried on fighting throughout this period. They were still fighting the Turks in 1896, alongside many notable academics, church leaders and even archaeologists. And although in 1912  Crete was not yet part of the Greek Kingdom, it sent three monks to the mainland to fight in the Graeco-Turkish War. And that seemed to be that.

In time, the Great Powers organised the removal of the Ottoman overlords, the terrible exchange of populations in 1923, and for Crete to join newly independent Greece, as the people wished. So, peace.....for a time. Actually for the best part of 40 years, quite a long time for Cretans. 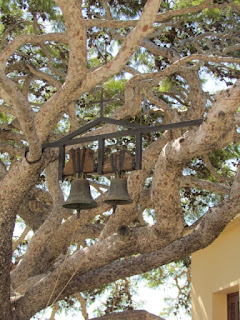 Then war broke out and in 1941 Crete was invaded and occupied by German forces. It is a well-known story. The British, under General Freyberg, a New Zealander appointed by Winston Churchill, made serious errors in their defence of Crete, an island which they should have been able to protect. Allied troops stationed in northern Crete - British, Australian and New Zealanders - had to evacuate to Egypt from the southern coast. Thousands did so from Hora Sfakion further west than Preveli, helped through the deep Imbros gorge by local Sfakians. However, thousands still remained. While many ended up in German prisoner-of-war camps, others were hidden by the local population who suffered terrible reprisals. Some soldiers eventually made their way to Preveli. 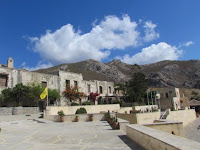 During the fighting at Rethymnon, the monastery had sent provisions to the troops. After the final occupation, shepherds kept the abbot informed of any Commonwealth soldiers hiding out in caves and took them food. However, there were too many for local people to deal with. The monks sheltered many of them in the convent and organised their evacuaton by submarine from the 'Lake', below the monastery. In all, they saved the lives of about 5000 Allied soldiers.

However, inevitably, the Germans found out about what the monks had been doing. They interrogated them to be told:

"foreigners pass from the Monastery for centuries now. We help the needy. We do not examine who he is, nor if he is English, Turkish, German or criminal. Thus there can have been guested either British or partisans."

Nine monks were transported to Chania for trial, leaving one old monk behind to guard the monastery. The three eighty-year-olds were dismissed and the rest accused of "illegal possession of arms and radio, and guesting of British fugitives and Greeks wanted by the occupation authorities." Although sentenced to death, they were released after the intervention of the bishop and by direct decree from Hitler.

In the meantime, the Germans had ransacked the monastery and removed all the stores. They did not, however, burn the olive trees, unlike the Turks. Interestingly, they also left all the precious objects apart from the Holy Cross. Now the Holy Cross was renowned for its wonder-working powers, already demonstrated in various actions against the Turks. The monastery tells the following story.

The Germans apparently tried to sell the Holy Cross in Rethymnon and Chania, but no one would buy. They then loaded it onto a plane at Maleme airport but despite its being in full working order, it would not take off. They tried another plane which also suffered mechanical failure. As soon as the Cross was removed, however, it took off with no trouble. Recognising the power of the Cross, the Germans eventually packed it up and gave it to the police who then handed it back to the monks. 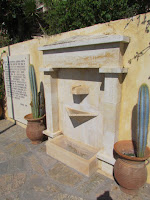 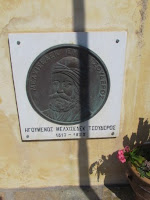 The rescued New Zealanders, never forgot what they owed the monastery, and erected a fountain, a plaque of the abbot and tablets which tell the story of the heroism of the Preveli monks.

We have always found it interesting that most visitors to south-west Crete are German, with very few Britons. Perhaps they prefer to whoop it up in Malia. In Frankocastello where we stay, a few miles from Hora Sfakion, a number of tavernas are run by Cretan-German families.

The Germans first started coming here in the 70s and 80s, when there were still very few if any tarmac roads. We meet German tourists at many of the sites associated with the Battle of Crete, including at Preveli. It is a tribute to the way Europe has developed over the last 70 years that old enemities and bitterness have been put aside. As the German tourists read the  inscriptions, they no doubt recognise the heroism of those who gave up their lives for the Allied cause, even though their own fathers and grandfathers may have fought on the opposite side. Here on the left is the memorial at Hora Sfakion, with the flags of Greece, Britain, New Zealand and Australia. Below is one of the accompanying plaques which lists the casualties, including those of the Germans. 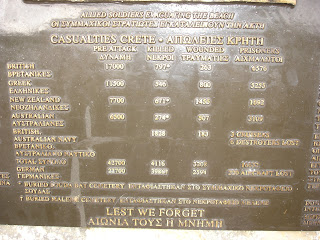 It is rare that we come across any memorials to the non-combatants executed in Cretan villages in retaliation for partisan activity or for rescuing Allied soldiers. Perhaps memorials are not needed as there would be no forgetting by the people who loved them. Perhaps in the new Europe it is thought better to move on. It would certainly be difficult for German tourists to come to terms with some of the atrocities, in a similar way that Britons have rarely acknowledged the cruelty and violence they meted out to people in some of the colonies they ruled. 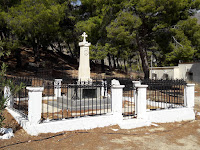 However, we did come across one such memorial in Hora Sfakion. Twenty seven unarmed civilians were shot for sheltering Allied soldiers and their homes destroyed. In fact, many of the villages around Hora Sfakion and Frankocastello suffered the same fate. For some years, the only memorial to the dead was a glass box containing the skulls of the victims. That box is still there, though with some skulls now removed, presumably for burial. New Zealanders, however, have erected a memorial to those who saved so many lives. It stands half way up the hill on the road out of Hora Sfakion. 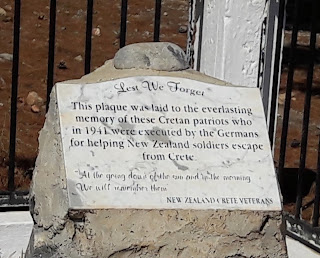 We should remember the militant monks of Preveli, though perhaps some of their militancy is out of tune with our more modern concepts of the role of the church in times of conflict. No one, however, could deny their bravery or their commitment to the lives of the local people among whom they lived, or to the strangers who passed through their doors. We should also remember that such bravery has been demonstrated by ordinary people in many places across the world, but particularly in the beautiful island of Crete. Here the villagers fought hard, gave their lives for people from the other side of the world and have also demonstrated to the rest of us how to forgive.

The struggle for independence in south west Crete

Recalling past wars; reflection or recrimination?

Posted by Elisabeth Ritchie at 10:23