Viewing the Minoans from afar

The Crete Stuart and I are familiar with, the Crete we return to time and time again is the Crete of Sfakia, of the Ottoman Empire, of the Venetians, of vicious vendettas and heroic last stands. It is the Crete of hilltop monasteries and tiny churches with centuries-old frescoes. It is the Crete of Kazantzakis' Freedom and Death and of wartime resistance to twentieth century tyranny. That Crete, the Crete we are beginning to know reasonably well, represents, however, just the most recent layer of civilisations going back thousands of years. And, as in our own country, the further away a culture is, the stranger, indeed, more alien it may seem. After all, can any of us Britons really relate to the builders and users of Maes Howe or Stonehenge? 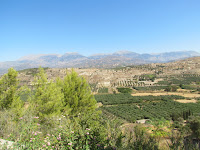 Well, this year for us Crete has been the summer of the Minoans. We've made their acquantance before, of course. Some years ago we were overwhelmed by the lovely palace of Zakros on the easternmost tip of the island and underwhelmed by the crowded and reconstructed palace of Knossos near Heraklion. About time, therefore, that we made a few more discoveries. So on Sunday it was Faistos and nearby Agia Triada, to be followed by a pleasant morning in Tilissos. Not, of course, to forget our return visit to the Archaeological Museum at Heraklion the day before. 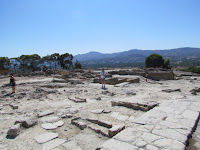 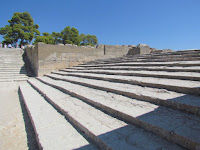 We started with the grandest: the palace of Faistos (or Phaestos or Phaistos) near the southern coast. It stands on a hillside looking towards the bare grey mountains of Psiloreitis, with the green vineyards and fertile farmland of the Mesara plain stretched below. Built in 1900 BC, it was rebuilt several times following earthquake damage. It was eventually destroyed by the nearby city of Gortyn. Despite being pretty much razed to the ground, you can gauge how impressive it must have been. As soon as you enter the Upper Court, you know you are about to step into a palace of some magnificence. So it should be, for the story goes that King Minos of Knossos gave it to his brother, the wise prince Rhadamanthys, from which to rule over the surrounding area.

Walking up the grand staircase to the main part of the palace must have been an overwhelming experience for new arrivals. Ahead stretches the Propylaeum, a monumental gateway reached through a corridor of what would once have been coloured columns, with individual rooms off. 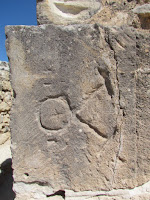 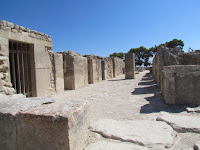 Some of these rooms seem to have been used to store the supplies necessary to keep what must have been a small city functioning efficiently. Archaeologists have found clay tablets used to record the provisions as they were stored. They also found the still-undeciphered Phaistos disc, which you can see in Heraklion's Archaeological Museum. 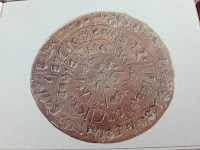 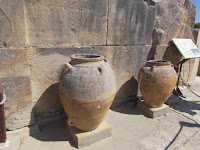 Some of the huge storage jars are still in place, a domestic detail I find quite moving among so much which is quite alien. 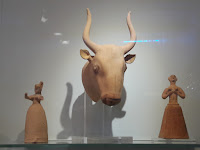 All the other artefacts have now been removed to the museum. 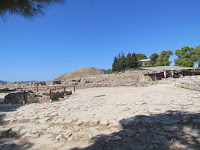 Finally, at the end of the corridor is the wide Central Court, in which it was said that bull games may have been held.

A few steps down, in the West Court, is what once was probably a theatre, with banked seating for viewing rituals or enactments, who knows? Across from that are enormous round cisterns, lined with plaster. 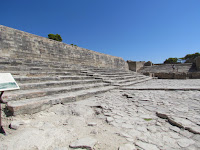 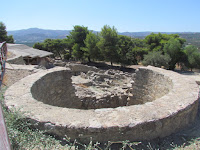 When we visited the museum in Heraklion, I was stunned by the wonderful objects, some from Knossos, some from Faistos and some from Agia Triada. Many of the cabinets contain artefacts from a number of sites. So too with the photographs in this post. 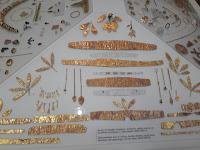 Faistos was a palace for a king. Heraklion's musuem helps you to visualise what that really meant. The jewellery is exquisite. Sadly, Stuart was not prepared to splash out on any modern-day replicas.

Here at Faistos you can see the royal apartments and imagine the Queen suitably bedecked. Sadly the frescoes which once adorned the walls have long been removed for safekeeping. 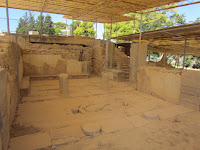 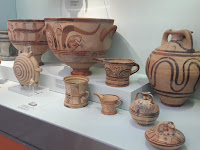 The pottery is astonishing in its rich decorative detail: both the useful containers like those here and the sacred ritual objects, so mysterious to those of us observing them from centuries afar. 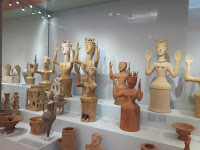 Not far from Faistos is another palace, Agia Triada, perhaps a summer palace or villa for the residents of the grander royal residence. Its lovely situation, overlooking the Libyan sea, must have provided welcome cooling breezes. 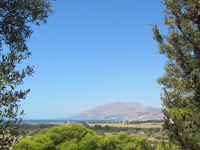 Here too, there were wall paintings and precious artefacts, now in safe keeping in the Heraklion museum. 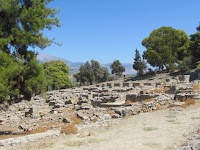 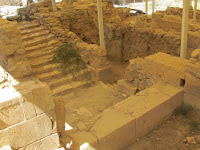 Beyond the palace itself are the buildings necessary to keep domestic life going. On the left, for example, is the agora or market place, looking out over the Mesara plain. Small houses surround the main villa. Paved roads and stairs provide access. 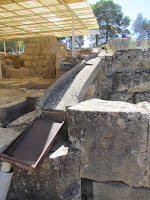 The drainage channels remind us that it wasn't always perpetual sunshine in this pleasant summer retreat. 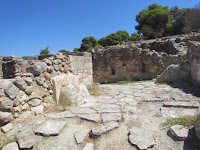 And death visited the summer palace, as well as life. Below left is the sarcophagus of one of its residents, the figures offering libations to the dead man. If the after-world is anything like as tranquil as Agia Triada, he will be perfectly at peace. 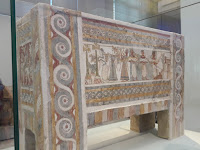 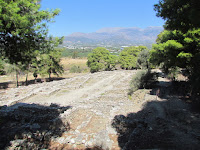 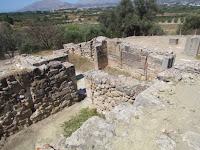 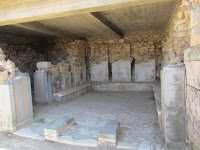 For almost three millenia, these stones have remained. We recent visitors can only conjecture at what the ruins mean, can only guess at the everyday lives of its residents, at their beliefs, at what really mattered to them. We are far too far away. 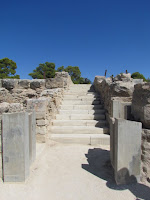 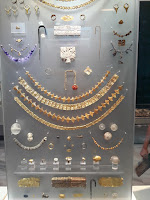 And so we remain outside, as we do at Maes Howe or Stonehenge, pretending that because we can approach the stones, we really understand who erected them and what they meant. How did they live, these sophisticated forebears of ours? In Maes Howe, we learn something of how our Scottish forefathers died, but, in Agia Triada, how did our European ancestors live?

We can only see them from afar, through the centuries, and wonder.

Posted by Elisabeth Ritchie at 19:11