How two lads from Peebles stirred the educational pot

All is quiet and respectable in Peebles these days. 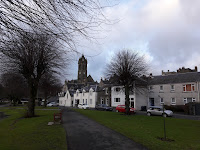 So it should be in a Royal Burgh established in 1152. Not that its age or status kept Peebles out of trouble, of course, though at least its Borders Reivers no longer ride south to raid English cattle. The town still remembers when in 1346, the Scottish Parliament held an emergency meeting on a square off the main street after King David II's defeat and capture by the English at Neville's Cross. Indeed, it is thanks to the European Union as well as the locals that this corner of history has been kept alive. 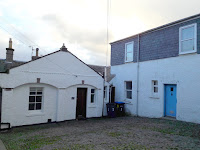 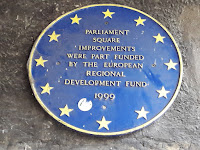 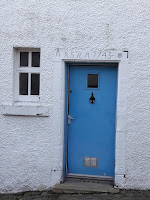 Nevertheless, the English haven't burnt down the town since 1549. Memories of the siege of nearby Neidpath Castle 1650 by Oliver Cromwell have long receded. The 15th century Bridge has survived the turmoil of centuries and still spans the broad banks of the River Tweed. 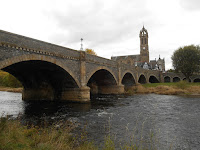 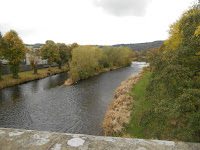 The river doesn't always behave well, of course, as we saw on our most recent visit. No sitting quietly on the park benches, unless you were prepared to swim out to them. Flooding is a regular hazard. Every time we visit Peebles, we find out something new, for this is a town which presents various faces to its visitors. This time we turned our back on its broad main street and quiet river and did some exploring. We were particularly interested in the story of William and Robert Chambers, who, from humble beginnings in Peebles, enriched the intellectual life not only of this small Borders town, but also of Edinburgh, Scotland's capital, and of the country as a whole.

What makes the Chambers' story so interesting? Well, partly because the Chambers boys exemplify so well traditional Scottish belief in the 'lad o' pairts', the talented boy who can rise through the education system from relatively lowly origins to take the highest offices in the land. Centralised organisation of education goes back to the Scottish Reformation of 1560. In 1616, the Privy Council required every parish to establish a school, paid for by a landowners' tax. Landowners had to provide a school building and school master. The education provided in these schools, and overseen by the Church, was basic and short, and attendance was not compulsory. So, not every boy was able to attend school or to remain until the age of 15 when, in Scotland, students could start studying at university. Nevertheless, parish schools provided boys like the Chambers with precious opportunities not only to better themselves but to better their communities and Scotland itself.

The Chambers boys were born in an area of Peebles called Biggiesknowe, in the 'Old Town', in one of a row of weavers' cottages built in 1796. William was born in 1800 and Robert in 1802. 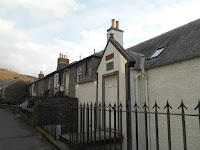 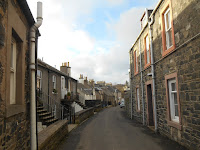 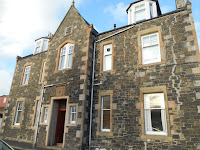 The family lived on the middle floor, with the workshop in the basement and cotton yarn stored in the attic. The boys' father worked as an agent for local weavers. They were educated in local schools. The Burgh Schools survive at the foot of School Brae, in poor condition, sadly: the English School founded 1766 (left)and the Grammar School 1812 (right).

However, the boys were not dependent only on their schooling for the education they received. They were natural autodidacts. Robert, in particular, borrowed books from the circulating library and read those his father had bought, including a copy of the Encyclopaedia Britannica. This belief in continuing education was to prove very important for their future lives.

Sadly, the Chambers family lost money during the Napoleonic Wars and their business was affected by the introduction of the power loom. Bankrupt, in 1813 they moved from Peebles to the Edinburgh slums. William was apprenticed to a bookseller while Robert continued his education at the Royal High School (founded 1128), in the old building at High School Yards in Infirmary Street. Built in 1777, it is now the Edinburgh Centre for Carbon Innovation. Walter Scott also attended the school. The Royal High School still exists, though in a different location to the west of the city.

Both boys proved to be farsighted thinkers and entrepreneurs. William opened his own bookshop on Broughton Street in Edinburgh's New Town and developed a printing business. He was committed to popular education and the use of modern technology to make printing cheaper and reading matter more accessible to ordinary people. Robert also opened a bookshop, on Leith Walk, where he began by selling his father's books. In due course, the brothers combined their businesses and became Edinburgh's premier publishing house and booksellers: W and R Chambers. They produced magazines and periodicals, such as the Chambers Literary Journal, as well as books about Walter Scott, a personal friend, and Robert Burns. Robert wrote and William printed.  Their most famous books are still published and popular, though in new editions: Chambers Dictionary and Chambers Encyclopaedia. They had an immeasurable influence on Scottish educational and intellectual life not just during the decades in which they lived, but for another hundred and fifty years. 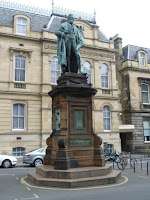 Both men were recognised by their fellow Scots. Robert was elected Fellow of the Royal Society of Edinburgh in 1840, followed by William in 1860. While they remained partners in their publishing business, their paths then diverged somewhat. William became Lord Provost of Edinburgh and was responsible for several improvements during his tenure from 1863 to 1869: the renovation of St Giles, the High Kirk of Edinburgh, and the slum clearance and reconstruction of areas of the dilapidated Old Town: Jeffrey Street, St Mary's Street, Blackfriars Street and the street which now bears his name - Chambers Street, where his statue stands. 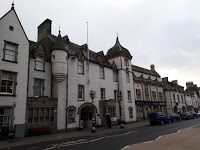 However, one of William's most interesting projects was educational: the creation in 1859 of the Chambers Institution in his home town of Peebles. It was founded 'for various useful purposes having in view the social, oral and educational improvement of the community.' To house his Institution, William bought and remodelled an old building in Peebles High Street, known as the Queensberry Lodging, constructed in the 16th century. 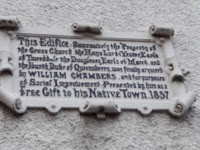 The Institution contained a library, an art gallery and museum 'for the instruction of the public' and a Great Hall for public meetings and exhibitions. Chambers gave the Institution to the town, which continues to use it for its original purposes: education and cultural enrichment. It was also used as a hall for the town council. The Institution's beautiful quadrangle houses one of the most original war memorials in Scotland, erected in 1922. 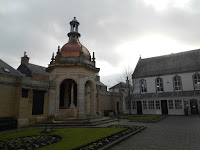 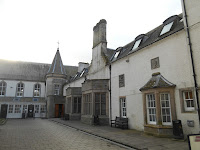 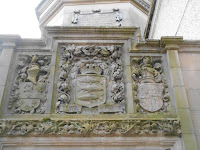 You can visit the library, the exhibition space, the original museum and the renovated Chambers Room. The latter contains a range of artefacts from the local area, very well presented and labelled by local volunteers, together with an amazing plasterwork replica of the Parthenon Frieze. In 1812, Chambers also commissioned an original neo-classical frieze, the Alexander Frieze, by Bertil Thorvaldsen. This represents in allegorical terms, the entry of Napoleon into Rome. Well worth having a chat with the very helpful curator. 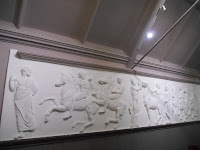 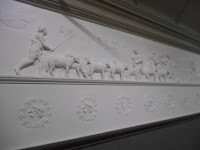 Interestingly, Andrew Carnegie, the famous philanthropist, said that he had gained his inspiration as public benefactor from the work of William Chambers. Indeed, Carnegie helped to pay for an extension to the Chambers Institution in Peebles in 1912.

Meanwhile, Robert Chambers went in a very different intellectual direction from his brother William, though they remained business partners. That direction was original, thought provoking and caused him some trouble. Robert was very interested in geology and was elected Fellow of the Geological Society of London. He published various books about geology. However one book was so challenging in the theories it presented that he never actually put his name to it or had it published by the family firm. Vestiges of the Natural History of Creation. Nevertheless, it was read by all and sundry, including Prince Albert who read it aloud to Queen Victoria. Indeed, it became a bestseller.

Published in 1844, Vestiges anticipated the publication of Charles Darwin's On the Origin of Species by Natural Selection in 1859. His book, Robert said, was a first attempt to 'connect the natural sciences in a history of creation'. It presented the arguments for the mutation of species. At that time, evolutionary theory was considered to be politically radical. It also challenged conventional religious belief. Indeed, churchmen were divided in their reaction to the book. The established churches found it threatening as it suggested that God did not actively promote social and natural hierarchies. They claimed that it attacked the social order and could provide ammunition to Chartists and revolutionaries. Freethinking Quakers and Unitarians, however, admired the book. Robert was not afraid to open up to discussion by ordinary people some challenging areas of thought which would in time transform their understanding of the universe and of their social, economic and political place within it.

One of the strongest opponents of Vestiges was Samuel Wilberforce, Bishop of Oxford and son of William Wilberforce, the abolitionist. The Bishop is famous for his role in the debate on evolution organised 15 years later, in 1860, by the British Association for the Advancement of Science, in which he attacked the view than humans and apes shared common ancestors. To be fair to Wilberforce, he  was concerned of the implications of Darwinism for the promotion of racist attitudes and eugenics, issues close to his heart because of his father's great work. During the famous public debate Wilberforce asked Thomas Huxley whether it was through his grandmother or grandfather that he was descended from a monkey. Huxley apparently replied that he would not be ashamed to have a monkey for his ancestor, but would be ashamed to be connected with a man who used his great gifts to obscure the truth.

Well, neither William nor Robert Chambers could be accused of 'obscuring the truth'. On the contrary, throughout their lives and in their different ways, they endeavoured to open up to the general public hitherto unfamiliar aspects of contemporary knowledge, understanding and thought. The Chambers brothers promoted and supported 'lifelong learning' before the concept had even been heard of. They helped to democratise education and make it part of everyone's lives.

Town Walk: A Guide to a Tour of the Royal Burgh, Peebles Civic Society

Posted by Elisabeth Ritchie at 11:01